La Borda defines itself as the first housing cooperative following the model of cession of use to be developed in Barcelona and built on public land. The initiative emerged in the context of the urban renewal of Can Batlló, a former industrial site located in the district of Sants-Monjuïc (Barcelona).

In June 2011, after 30 years of waiting for the transformation of Can Batlló, the neighborhood of Sants took the initiative and occupied the site with the aim of organizing it themselves.

One year later, within the framework of Can Batlló, and as a result of a participatory process undertaken by the community, a group of residents decided to get organized to collectively address the problem of housing affordability through the implementation of a housing cooperative (La Borda).

The housing cooperative can be described as a framework for the development of social innovation in housing: collective organizations and structures with shared forms of leadership, which create new responses to current problems and contemporary social needs. 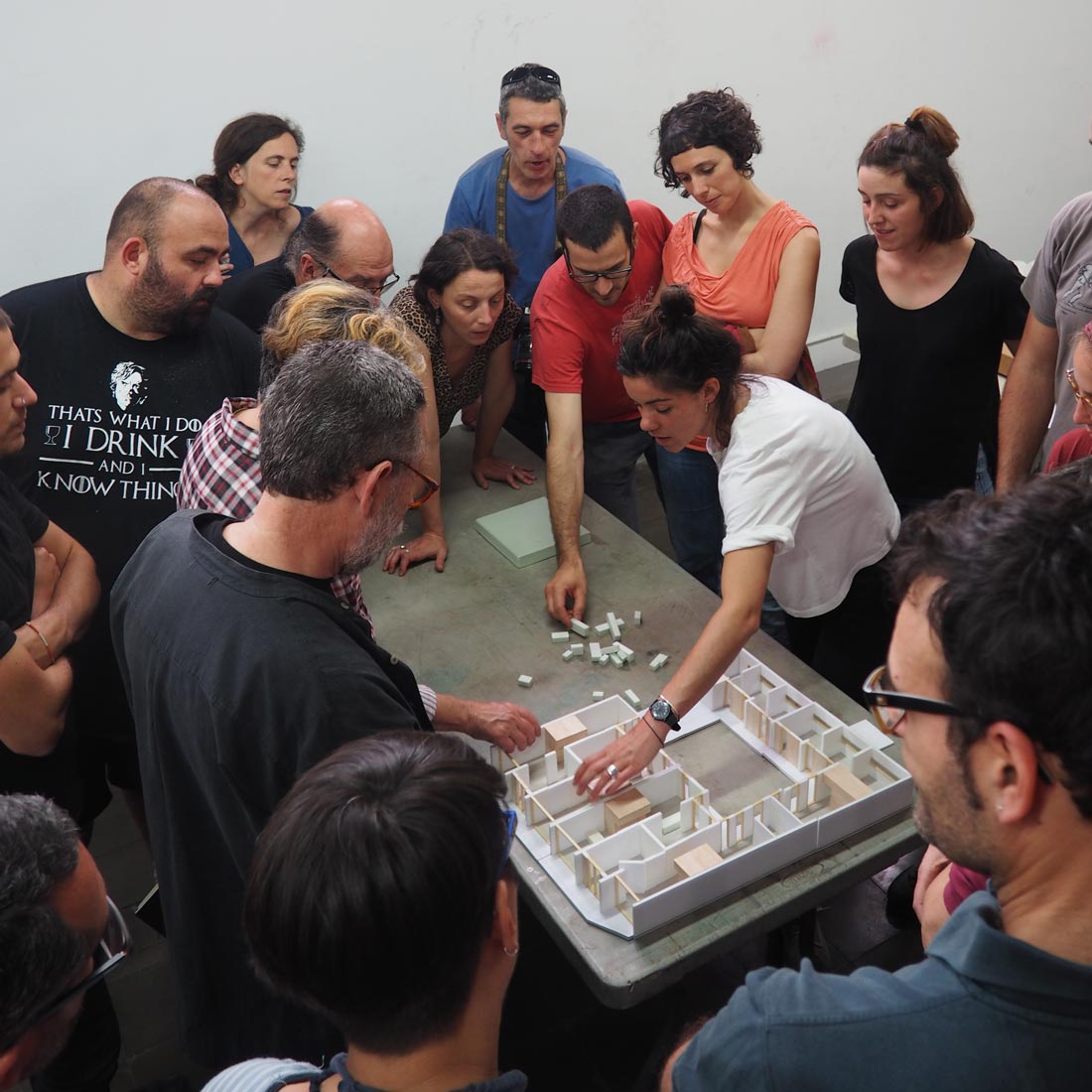 In the case of La Borda, the need for housing also incorporated the challenge of transitioning towards sustainability in the broadest way possible: in political, social, economic and environmental terms.

The involvement of different actors (including architects) became an opportunity to rethink the production of social housing as a bottom-up experience, from below and with the participation of future inhabitants.

La Borda’s position in favor of a community model that runs counter to the conventional housing model allows for overcoming some of the typical limitations of architectural design. In the case of public housing, the administration’s fear of the unknown occupant makes it impossible to introduce changes that affect established typologies. Also, the real-estate market’s logic has the tendency to produce low-quality housing by assimilating it to an object of consumption.

In order to describe and analyse the process, five key concepts have conditioned the strategies of the project: self-management, cession of use, community life, sustainability and accessibility. 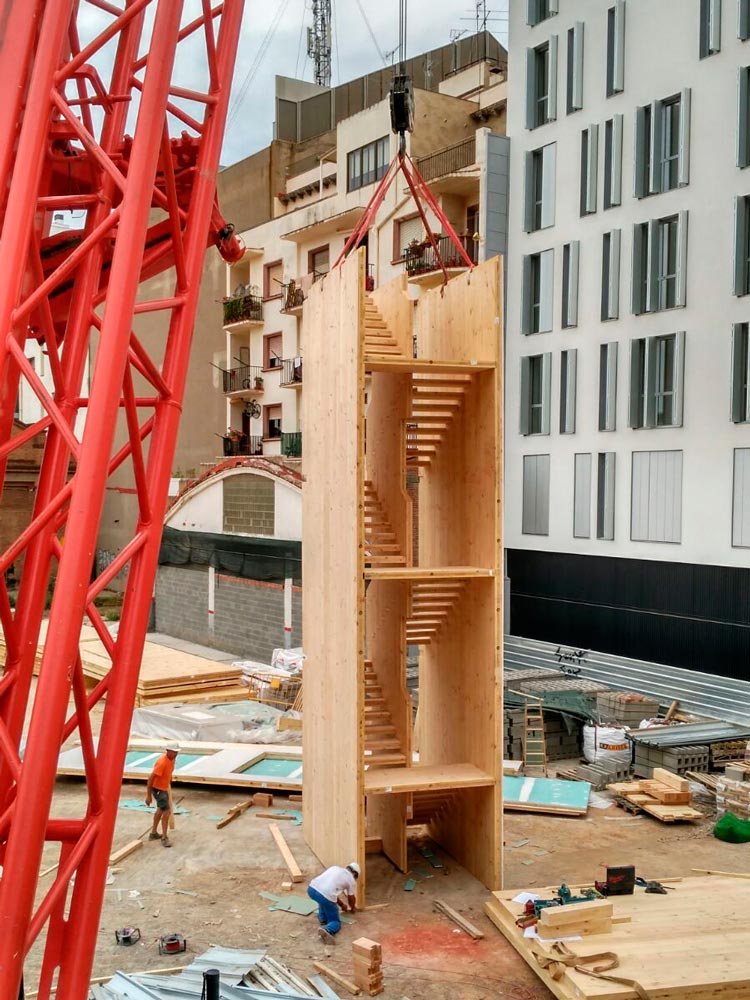 The members of the cooperative, and future users, are those who direct, control and develop the entire process through an internal structure that encourages their direct participation in work committees and in a monthly general assembly. The cooperative only relies on the support of technical teams specialized in the tasks its members cannot assume, as is the case with the architectural project.

According to the values of the cooperative, active participation on the part of the users has been integrated into all phases of the housing development process: design, construction, management and life in the building.

In the first phase, the collaborative design of the building through thematic workshops takes advantage of the collective intelligence and social capital of the cooperative and makes the future residents co-responsible for the project’s decisions. This process increases awareness and empowerment of the cooperative, while encouraging the sense of community and belonging among its members.

The group’s exhaustive knowledge of its real needs reshapes the typical family-based patterns and pre-established profiles derived from housing regulations in order to adapt the building to the particular requirements of the cooperative.

La Borda is not only a collective housing project, but also the result of an innovation process that allows for introducing changes on housing regulations and public housing projects based on real debate about changes taking place in our society – from the composition of the basic unit, to living and energy models, and housing values and minimums. 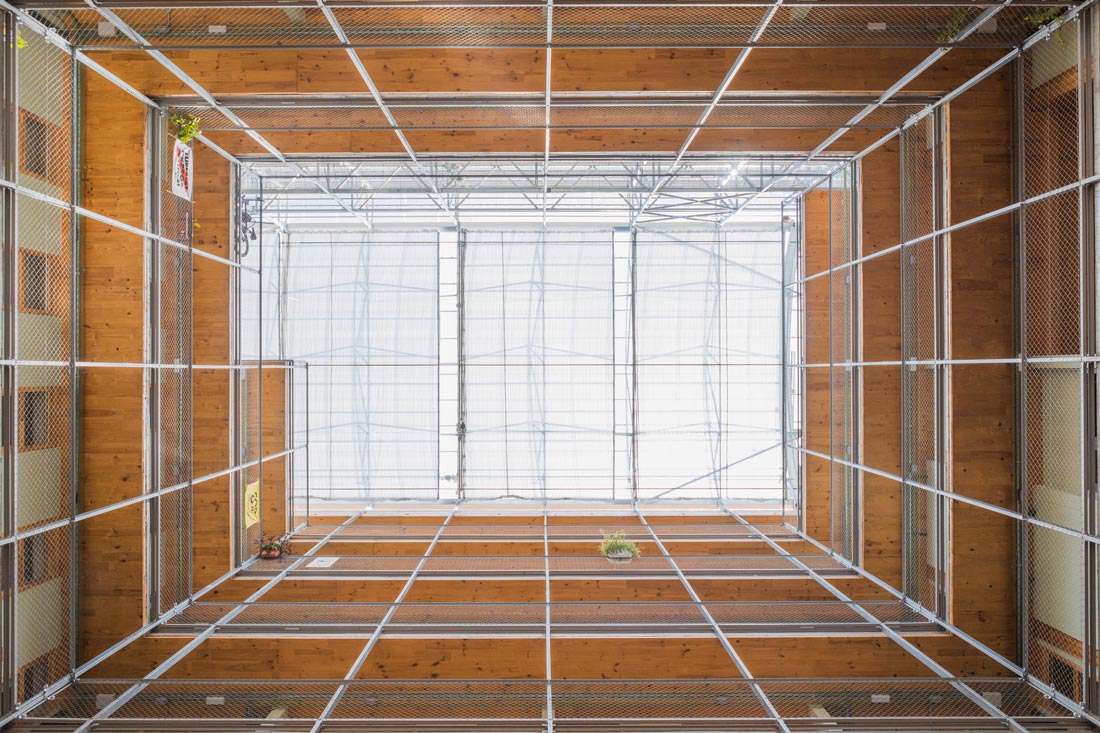 (2) Cession of use and collective property

The housing cooperative scheme being used by La Borda is categorized under the legal term “cession of use”. The model of cession of use is widespread in countries such as Denmark (Andel Model) and Uruguay (FUCVAM). Both experiences are direct references for La Borda in developing this model, where the property will always be collective while the use is personal. It is a non-speculative model that takes housing as a basic right, with a strong commitment to the use value above the exchange value on the market.

As a non-profit institution, the cooperative developed the housing on public land, where a leasehold was established by the City Council for 75 years. The cooperative will be the owner of the building and will cede the right to use of the dwelling to its members, grouped into units of cohabitation. The right of use is acquired by paying an entry fee (which will be returned if the tenant leaves the cooperative) and maintained kept by paying an affordable monthly fee.

Once the property is resolved and the focus turns toward use, the requests for the architecture change. The building is an open infrastructure, which is configured by how it is used over time, adapting to the evolution of the community and the changing needs of the users.

The common infrastructure is formed by common areas/shared spaces and housing. The housing is defined from a homogeneous matrix of 16 m2 housing units, generating multiple typologies that are de-hierarchized and highly appropriable for each user through freely adopted decisions. The outcome is 28 units with different typologies from 40 m2 to 135 m2. 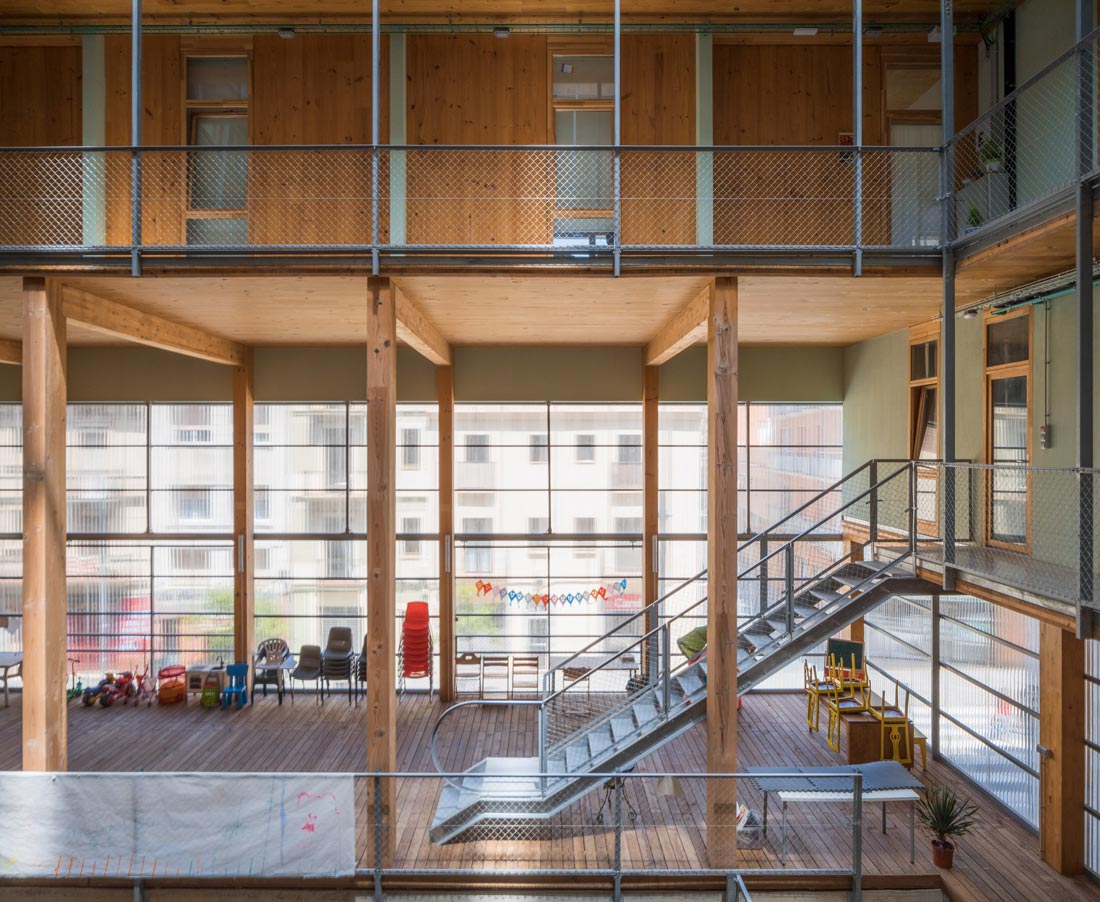 La Borda wants to produce new forms of cohabitation that enhance the interrelation of the community through the use of shared spaces: establish links of cooperation in the area of domestic tasks and care to make visible the private spheres of daily life and promote equal relationships among residents.

By fostering community life through shared common facilities, the conventional collective housing programs have been reimagined and optimized in terms of space and energy. The housing units reduce their area by 10% since services such as laundry, guest rooms or storage rooms (often oversized or underutilized in conventional homes) are shared spaces. The building also has extra social spaces required by the community such as a large dining kitchen, a health and care area, a reserve of unused space adaptable to the varying needs of the group at all times. And there is a central courtyard that concentrates all the circulations and connects the shared spaces from the mixed-use ground floor and first floor to the exterior terraces, new spaces for conviviality and interaction. 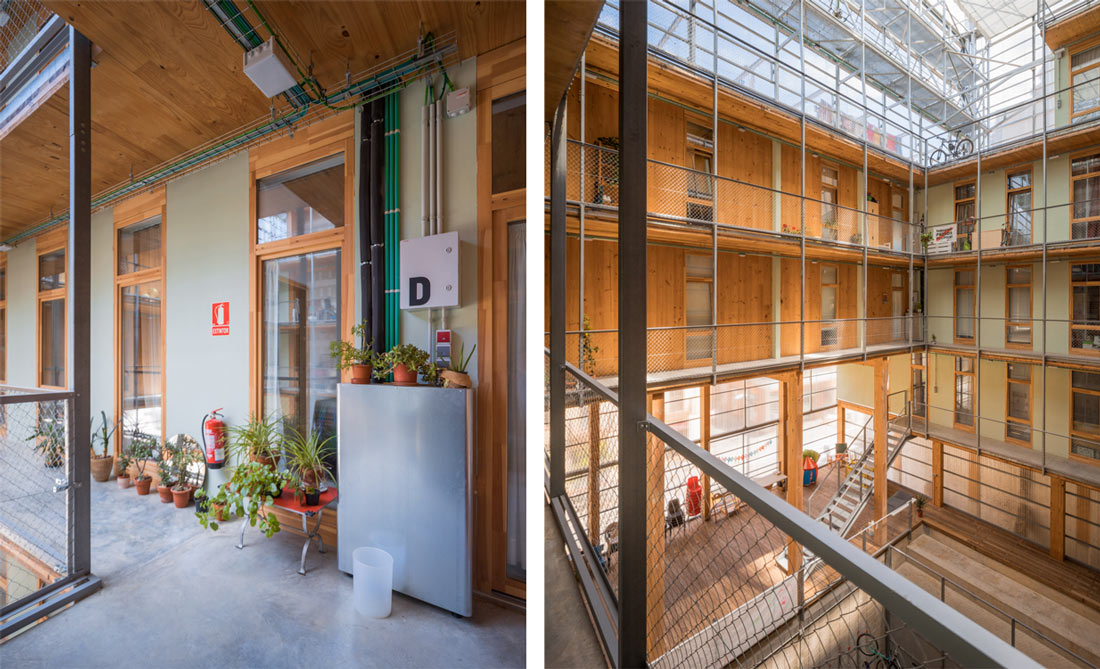 The cooperative prioritizes a building with the minimum environmental impact, both in its construction and throughout its life cycle, and it is a benchmark for the area. Another fundamental goal is to eliminate the possibility of energy poverty among future users, a situation that some of them suffer today due to the high costs of energy and their low incomes.

The main strategies implemented in order to achieve these objectives are:

1: maximize south-facing units
2: maximize compactness in winter and openness in summer, through dynamic openings of a central atrium.
3: opaque and transparent elements of the façade with low U values.
4: air-tightness higher than standard.
5: optimal solar shading in each orientation.
6: cross-ventilation in each unit.
7: thermal mass dimensioned to summer comfort needs
8: very low demands in heating make the DHW the great thermal consumer. A centralized system with a biomass boiler has been designed, preparing hot water for domestic use and heating.

Future occupants are empowered, through consciousness and a collective definition of environmental objectives (debates were carried out on standards, role of the residents, effects on daily routines).

In terms of grey energy reduction, the structure and the envelope elements are wooden: in this sense, the building represents a great innovation and is currently the tallest wooden building in Spain.

Also, the parking area has been eliminated; thus, all the impacts of excavation and concrete retaining walls (which usually represent the largest part of the environmental impact of the materials of a project) have been avoided. At the same time, all impacts related to the daily transportation of the occupants have been reduced, and the grey energy of new cars has been avoided.

The common use of elements like storage rooms, guest rooms, laundry, kitchen, etc. reduces the overall area dedicated to these rooms, thus cutting back the heated volume overall compared to a conventional housing block.

The result is an almost zero energy consumption and comfort in the building with the associated minimum construction and running costs. 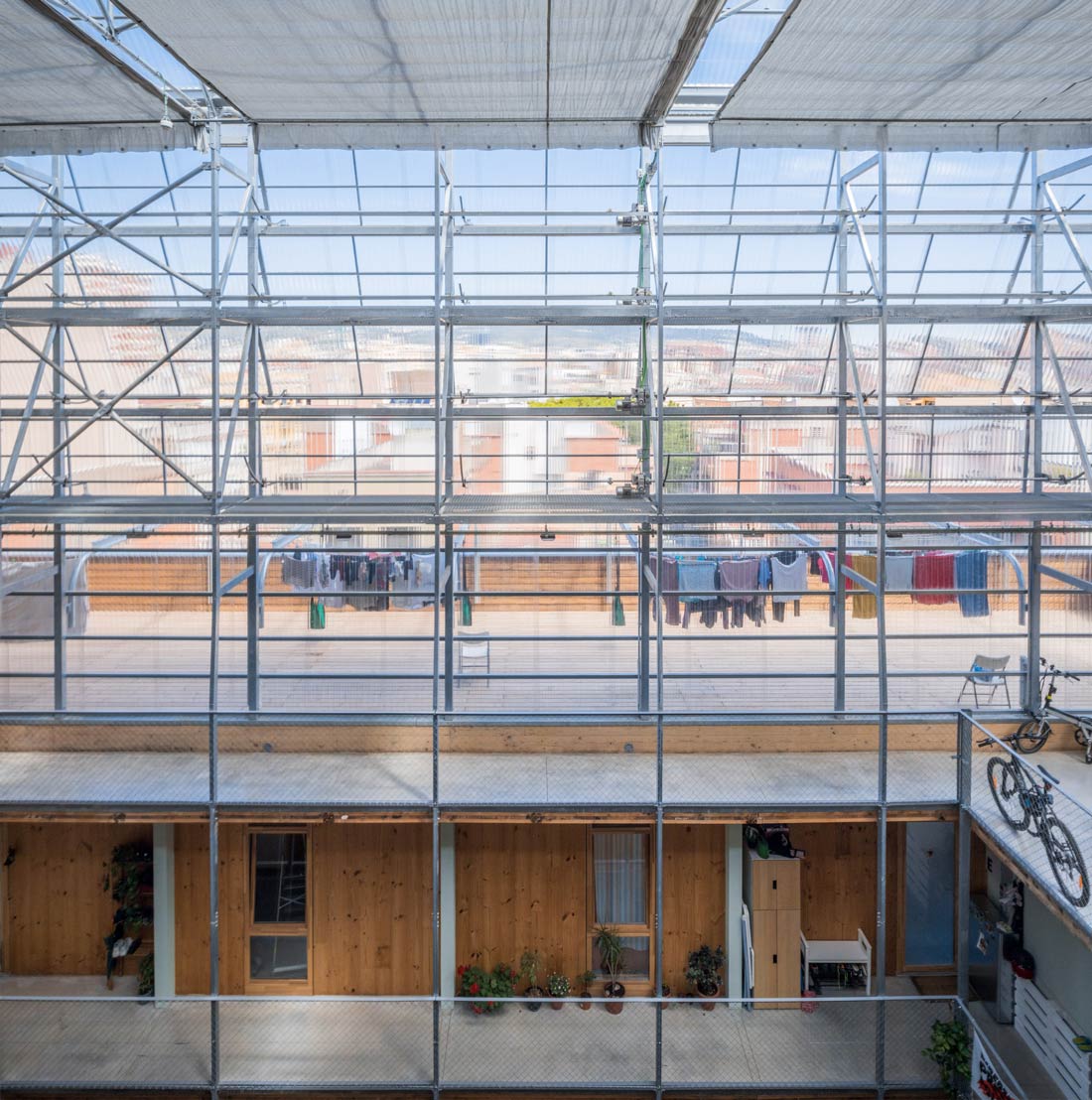 An essential condition of La Borda is to guarantee access to decent and affordable housing for its members, to become an alternative model for people with low incomes. The project is funded by the residents’ contributions, collaborators’ contributions (groups or individuals) and the social economical network (mainly the credit cooperative Coop57 through loans and participatory titles).

The budget for the development adds up to €3.1 million and takes into account all necessary investments to carry out the project (taxes, professional fees, construction budget). The construction budget totals €2.4 million (€850/m2).

Financing difficulties make the cost of construction a determining factor in establishing the value of the monthly rent. In order to reduce it, different strategies are followed: budgets as a design tool, prefabrication (wood system) to reduce the duration of construction, constructive simplicity, self-management to reduce industrial benefit, some construction phases and self-construction carried out by the future residents. 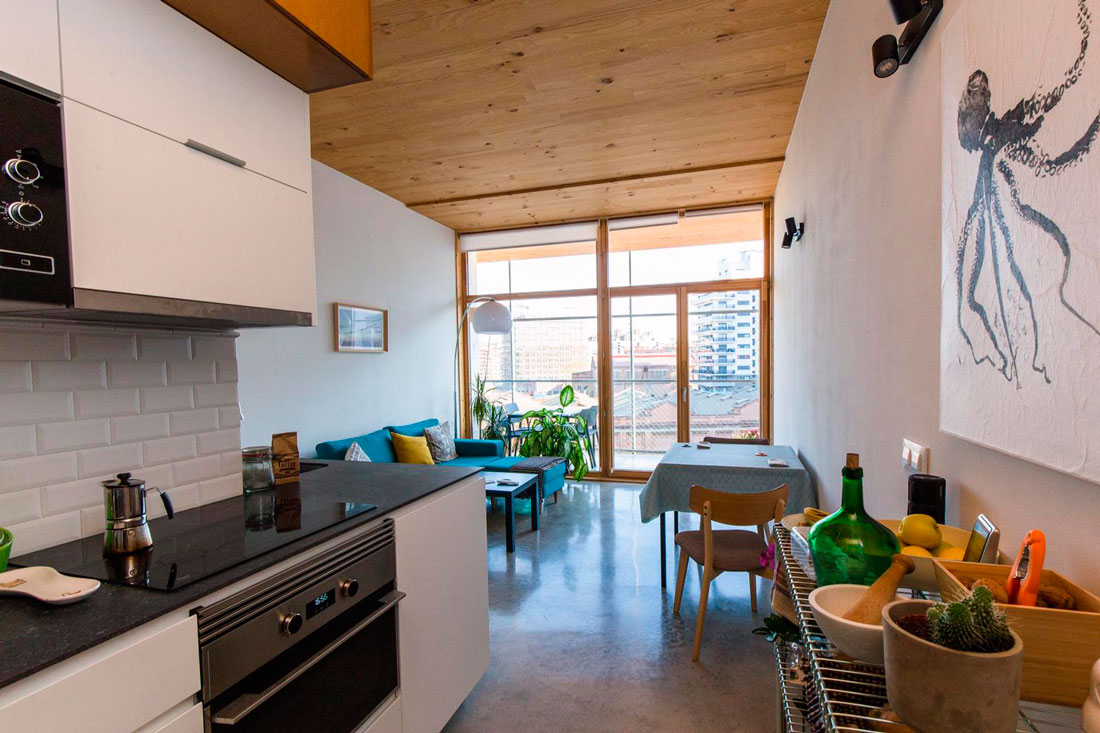 The project is executed in two phases: the first one seeks to reach the minimum habitability that allows people to move into the building; then, the second phase, after the occupation, will complete the building (community spaces and personalization of flats). In addition, the design of the building has incorporated low-tech solutions to favor processes of self-construction in some parts, which allows for reducing the overall cost and maintenance over time.