This work is the result of the collaboration with Juegaterapia (www.juegaterapia.org), a non-profit foundation that improves the living conditions of children with cancer. They began by delivering donated play-stations to children to be used during chemo treatments, but they have expanded their agenda and now they transform rooftops and leftover spaces for installations in pediatric hospitals into playgrounds for hospitalized children. This project offered a great opportunity to test out how design can shape perception, cognition and experience and most, importantly, how it can be instrumental in improving everyday life. 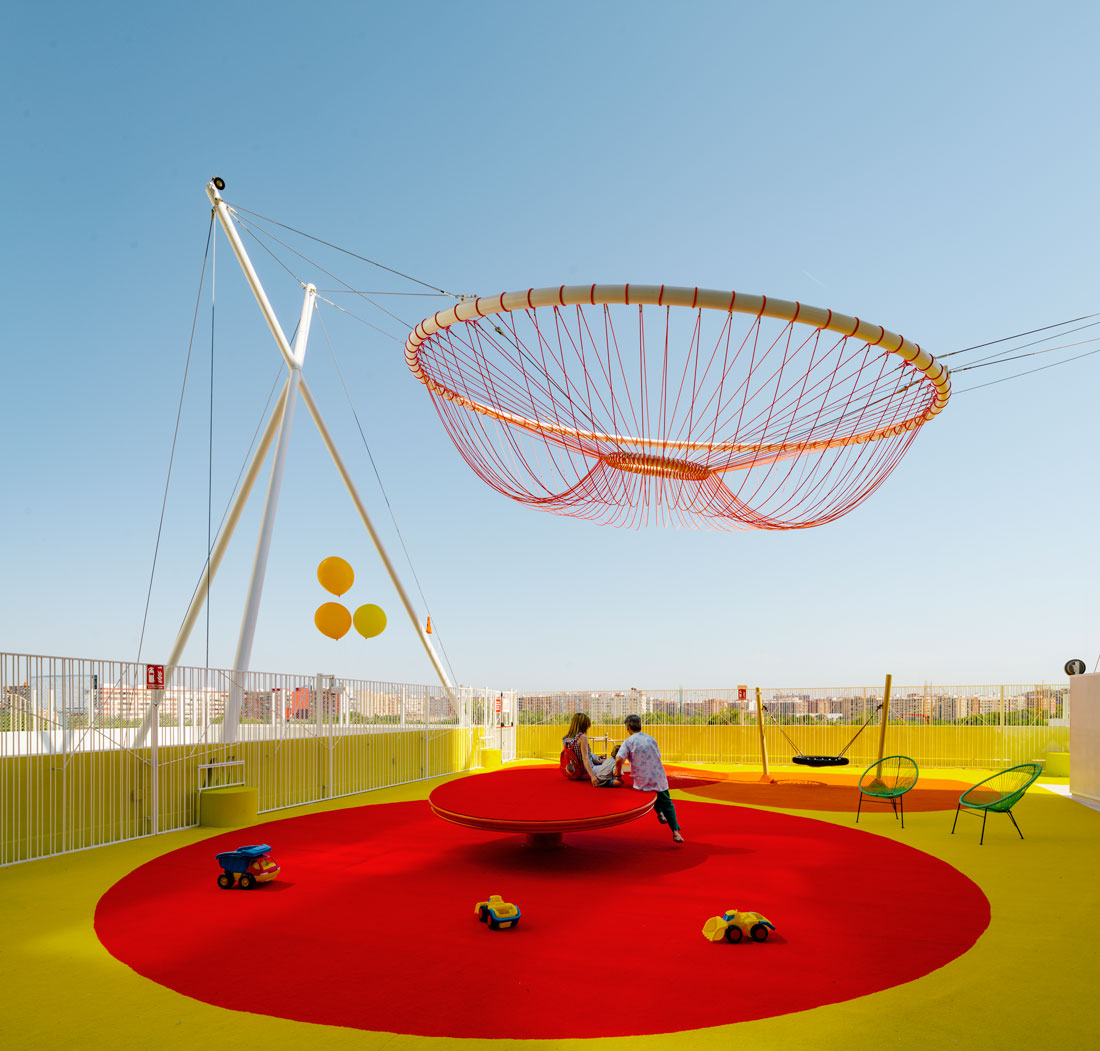 Several studies have demonstrated the beneficial effects that nature can produce on hospital patients, in some cases shortening recovery times. However, when collaborating with the Juegaterapia foundation we learned that, despite this fact, not all hospitals are willing to add vegetation into their infrastructures, as they are concerned about costs and maintenance. As a result of this constraint, we explored and analyzed which characteristics of natural environments can be extracted and recreated by artificial means to be inserted into the existing structures.

We were interested in the tension between nature and artifice, and in processes of abstraction used in art, in order to create bridges between both – in some cases literal, in others metaphorical – when two realities that are usually disconnected become linked. Also, we wanted to use design to create a bridge drawing on the memory of the place: the city of Valencia, a city by the sea. 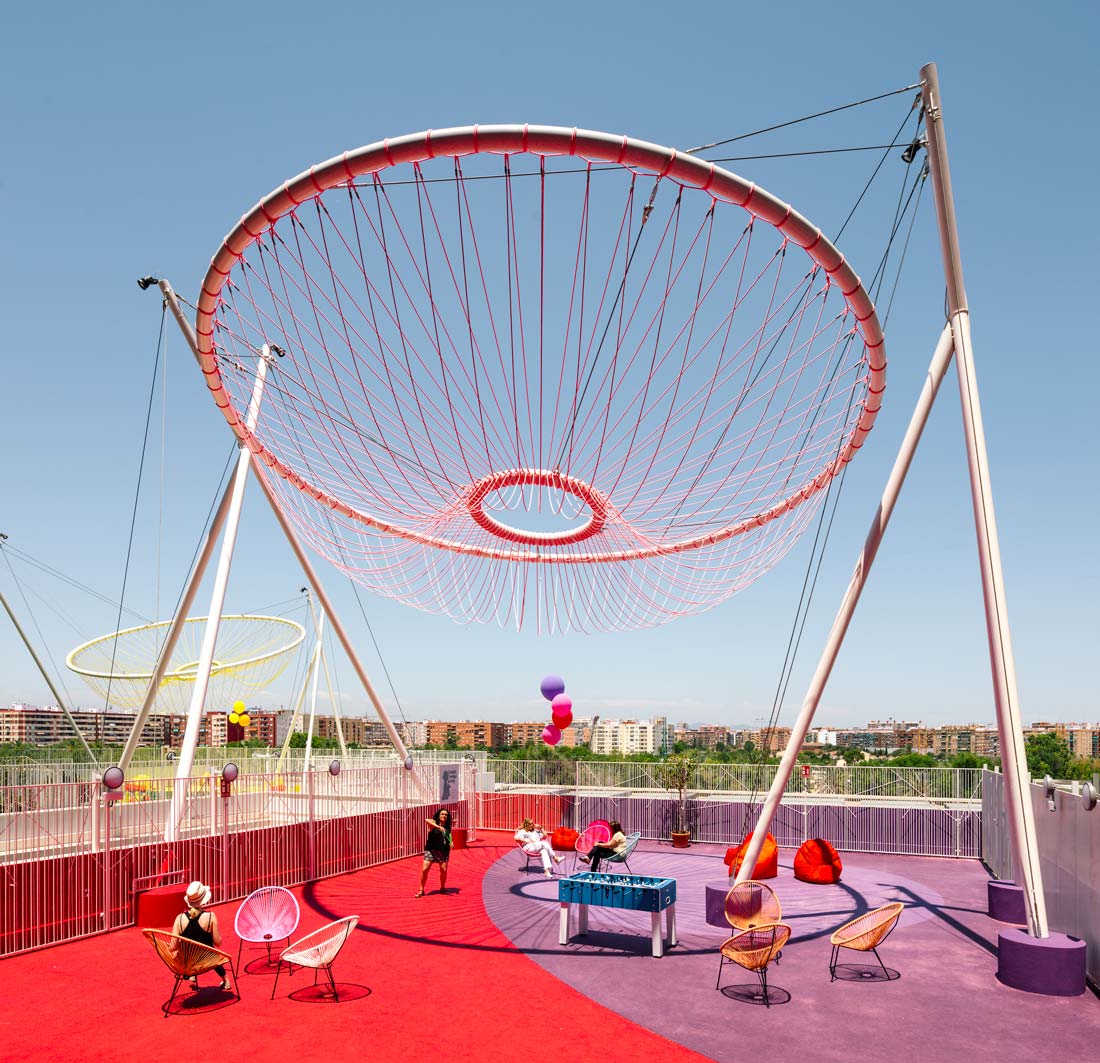 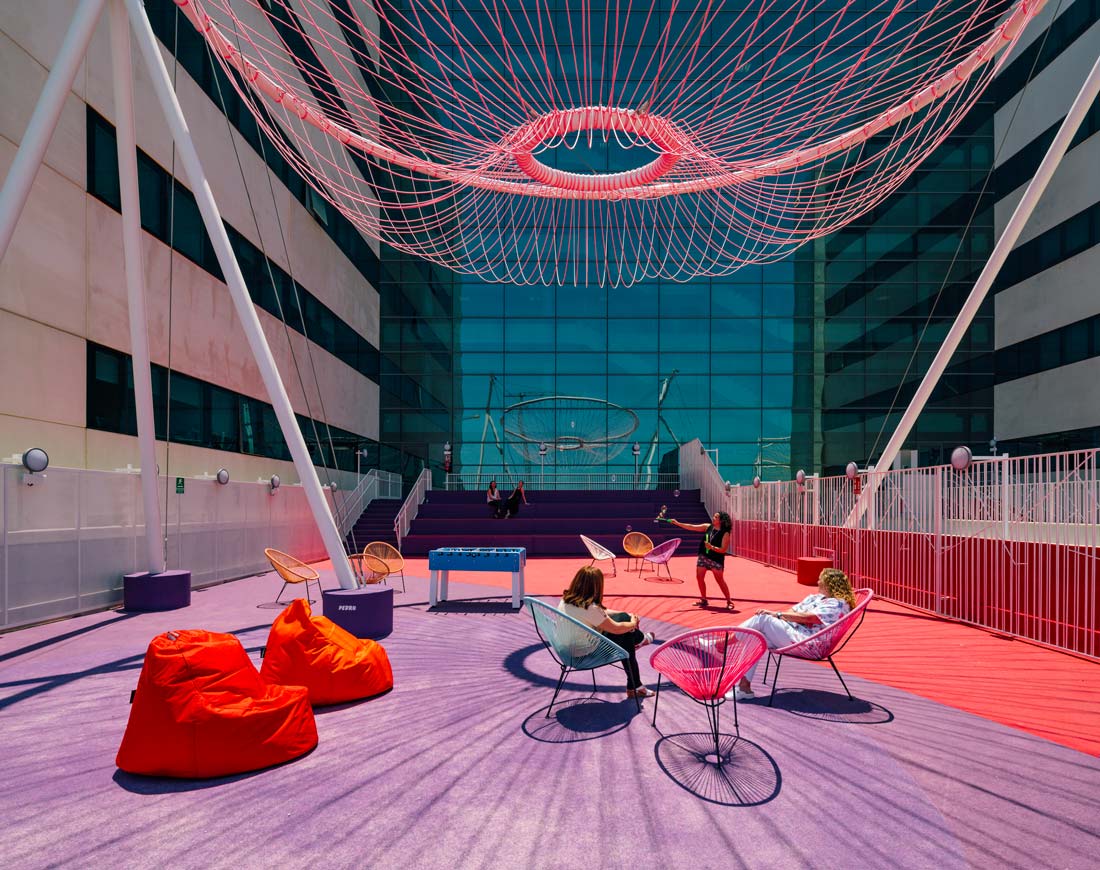 Through design, it is possible to generate artificial systems that perform in a similar way to living systems, without mimicking natural elements literally in form but in their predicative dimension: movement, flexibility, variation of density, sound, lightness, etc. Also an interactive quality is pursued: actions like sheltering, hanging, lying down under the shade, or swinging – frequently done in nature – should also be possible in these artificial environments.

In analyzing what could be brought from nature we discovered colors, the repetition of tree trunks, the movement of leaves, the flexibility of branches, the different densities, shade, etc. We started to think about one material that we could use in different ways to recreate all these characteristics, and which would be easy to work with and inexpensive. We thought about the versatility of ropes, their resiliency, and the tactile quality that make them one of the most-used materials in playgrounds. 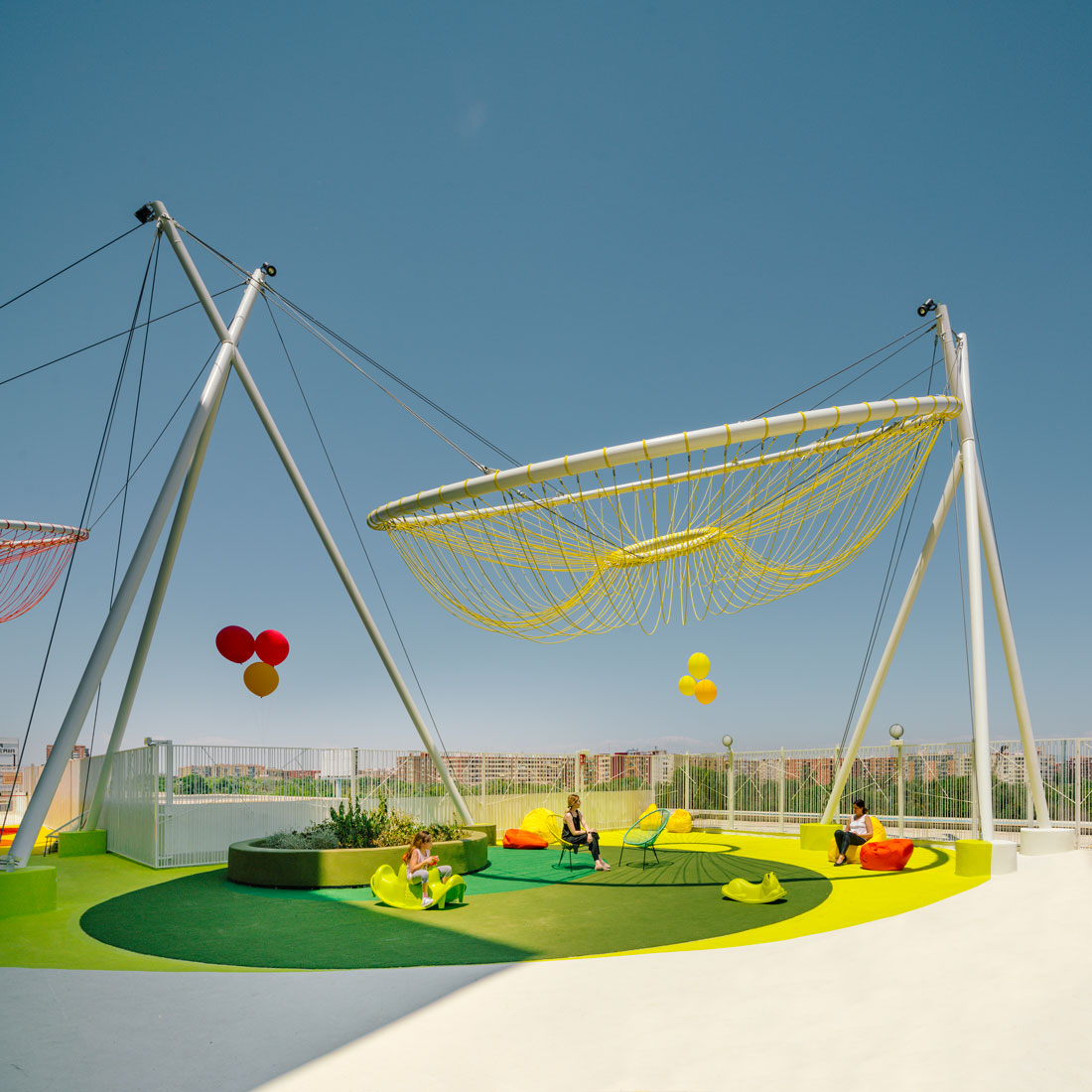 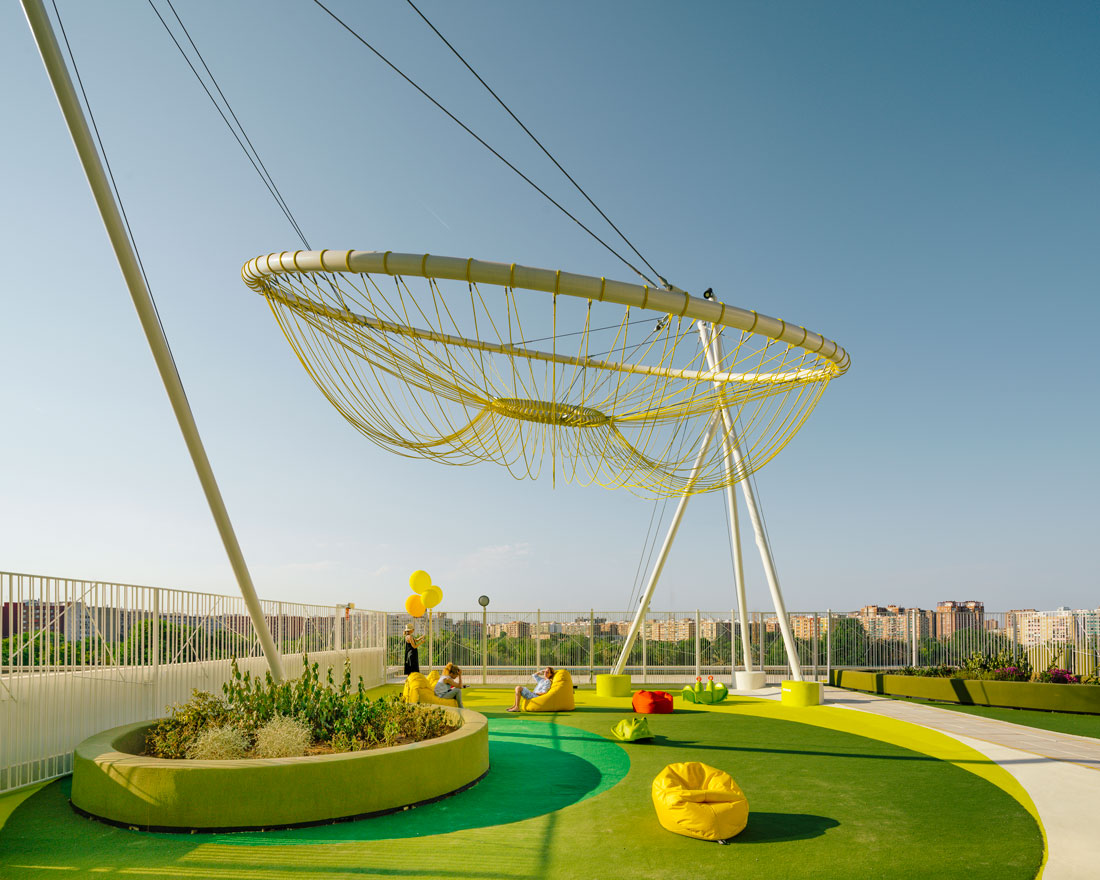 The intention was to create a magic world, an open space where the elements that we proposed could generate artificial landscapes and that could blend with natural elements, where the different play structures could be used in different ways so the experience of playing could be new and unexpected every time. To that end, we proposed big hanging rope structures that move with the wind, that cast different shades during the day and that cover open and flexible spaces that can be used in different ways: as a playground, an exercise space, a stage for shows and concerts, etc. We wanted to make sure this magic world could also be enjoyed also from the hospital rooms, so the bird’s-eye view of the playground was an important part of the design. The big hanging structures are perceived from the rooms as colorful elements that each child can interpret as something different: a giant flower, a jellyfish, a spaceship… 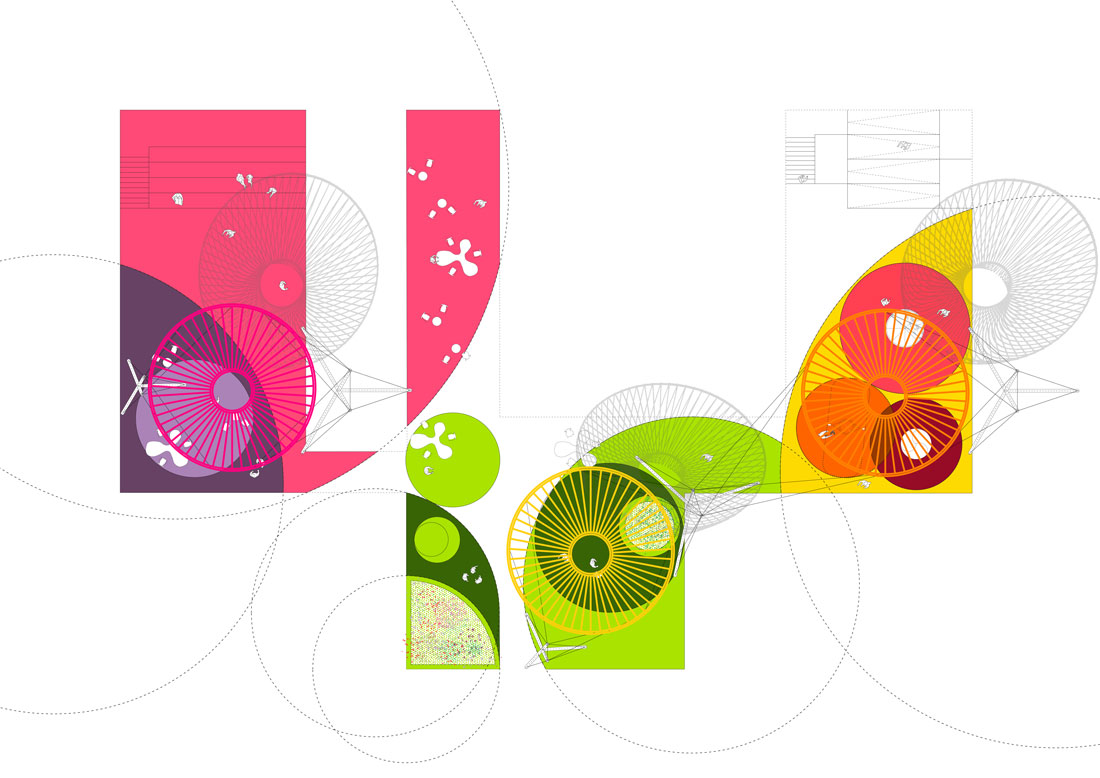 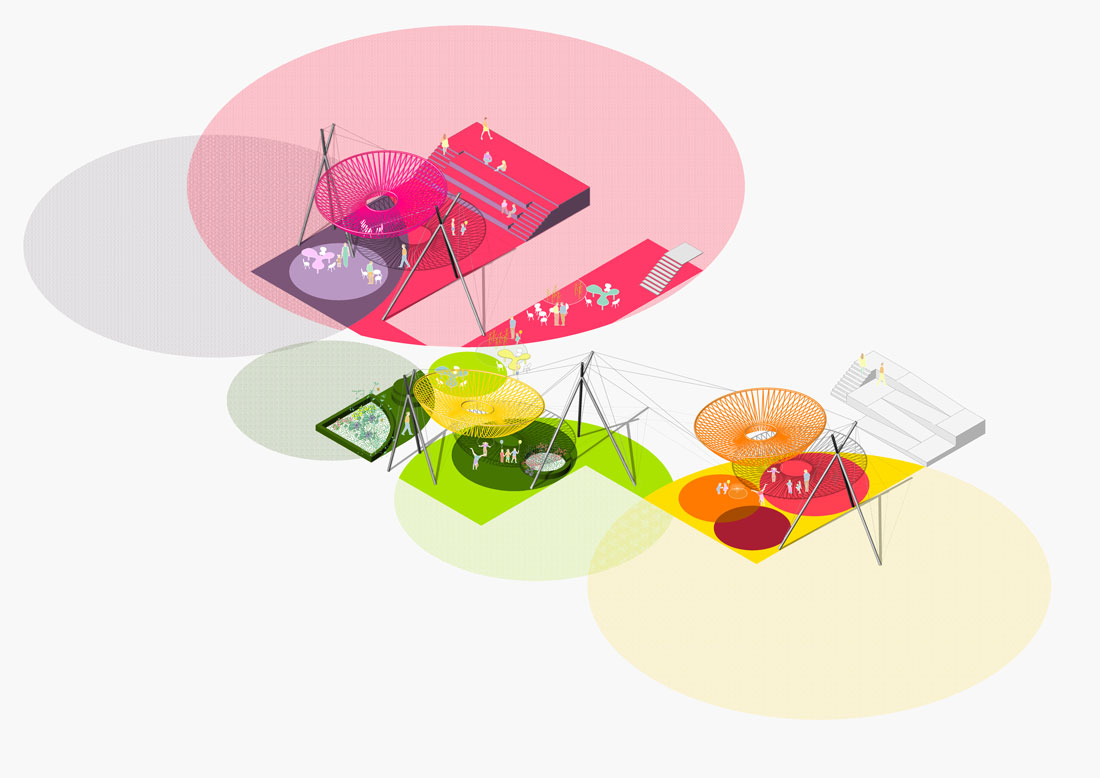