The Itaim Tower is an apartment building located in Itaim Bibi (São Paulo), a neighborhood under transformation that is shifting from the traditional network of horizontal detached houses to a skyline of high buildings, mainly residential, that are intended to meet the growing housing demand among the prosperous upper-middle class in the country’s financial capital. 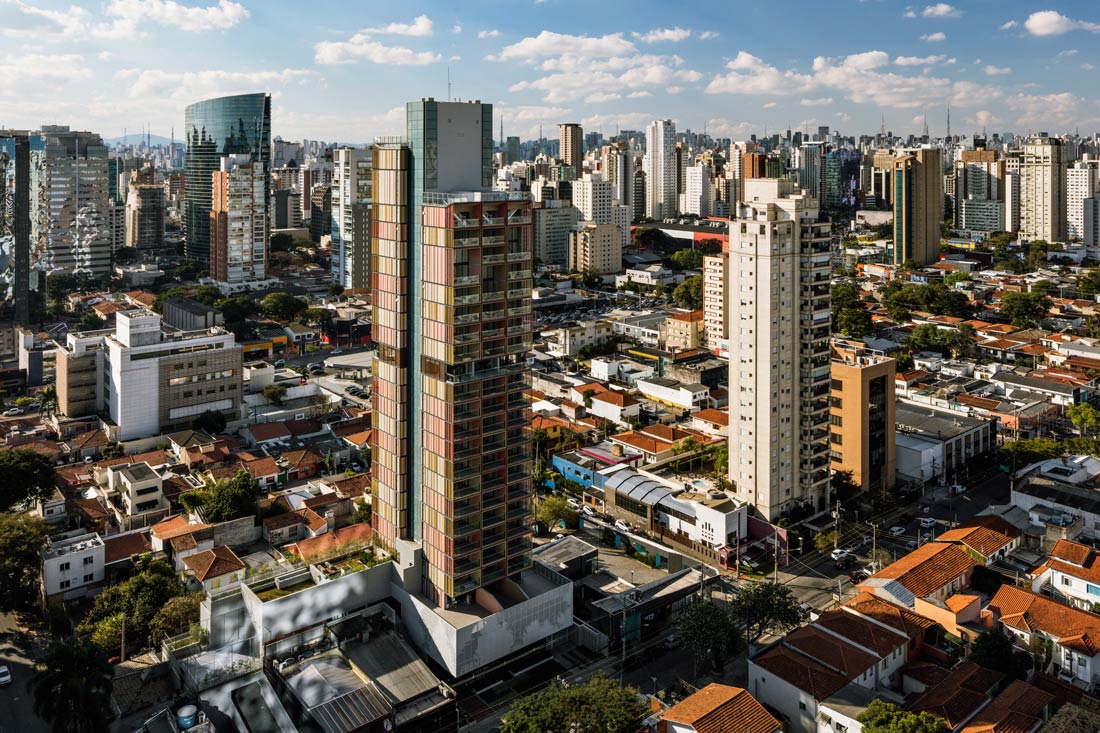 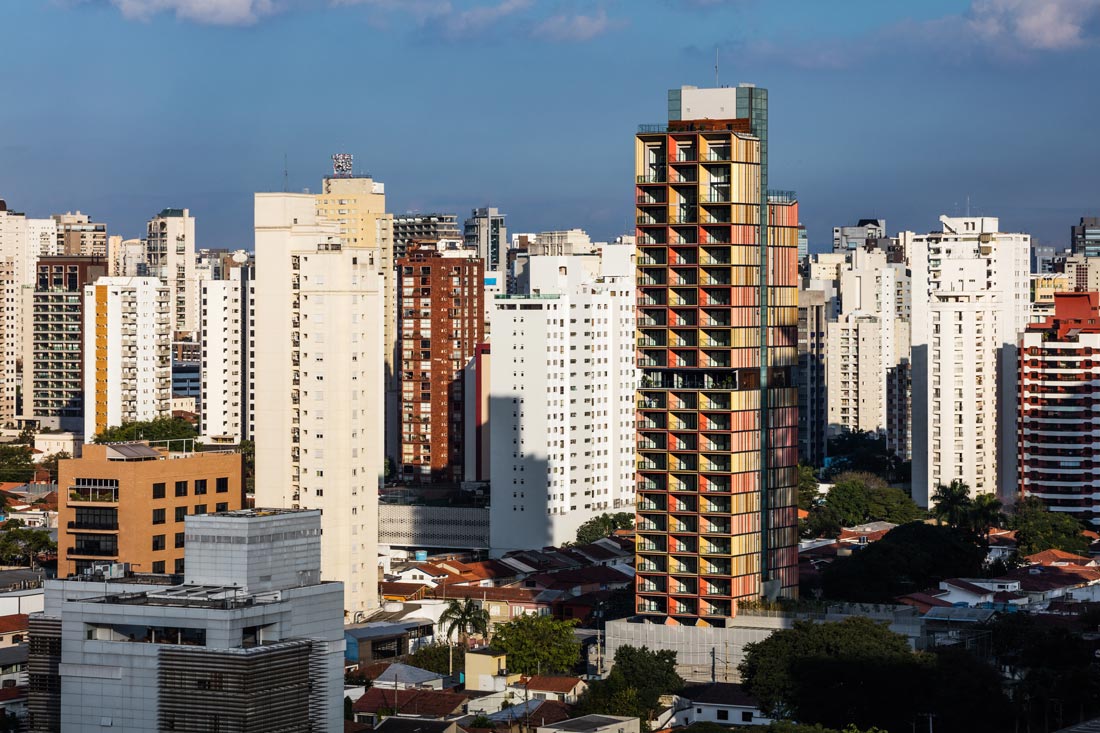 The building comprises 123 small apartments – of about 30 sq.m. each – distributed along 85 m in height, which are built over a platform of common areas (squash, indoor pool, restaurant, social room, etc.) and a basement parking area. 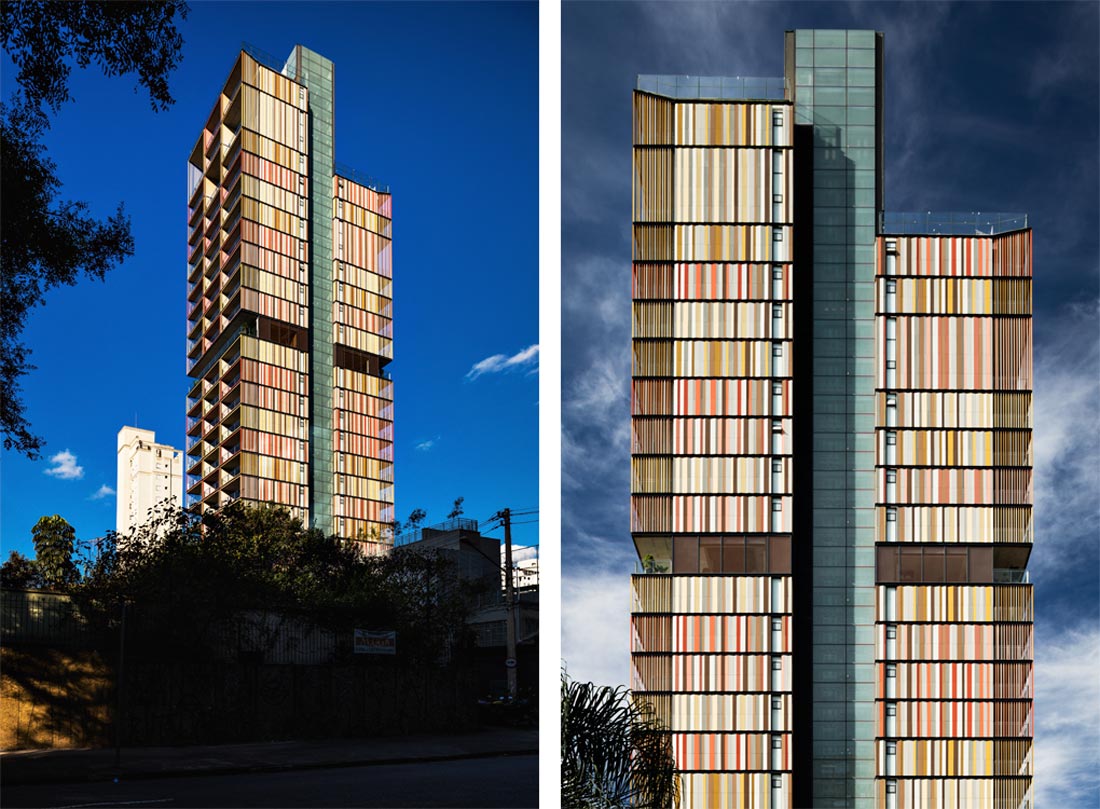 The project seeks to maximize space and functionality, a challenge considering that the tower was greatly conditioned by the volumetric limitations imposed by the regulations and by the strict requirements of optimization. The small apartments with large individual terraces are distributed amid communal lobbies and elevators with views to the city. The social areas – not included in the floor area ratio calculation – are located on a differentiated intermediate floor, which divides the tower into two parts. 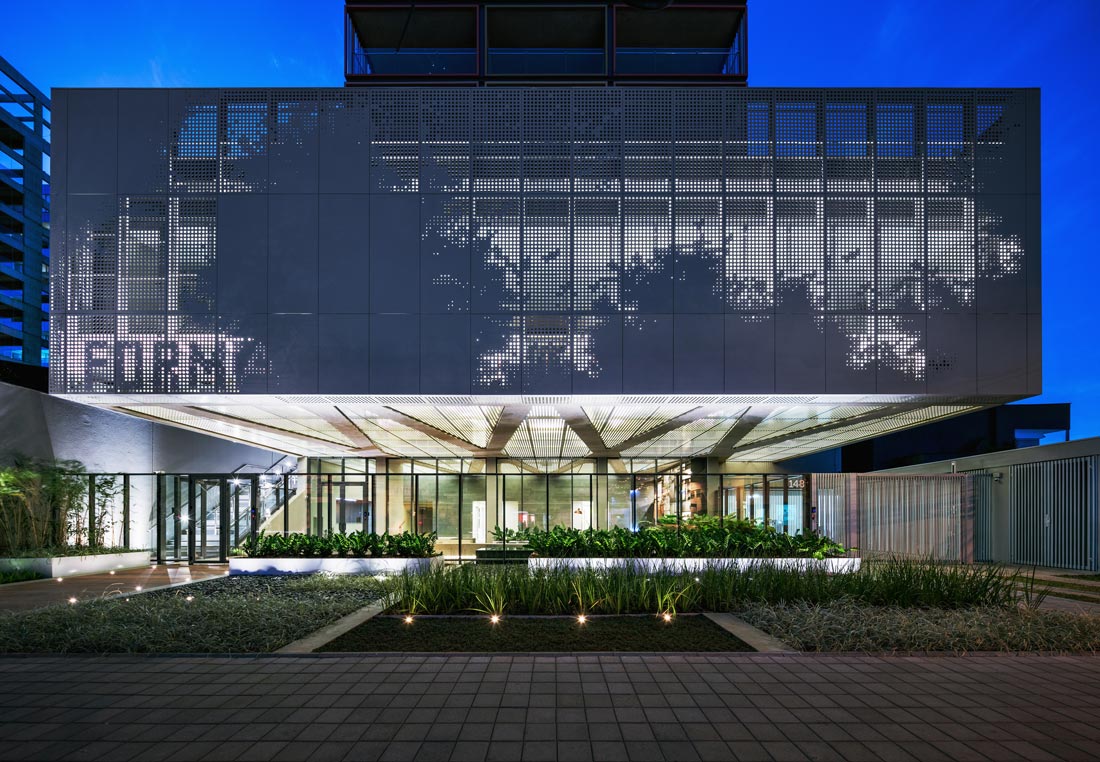 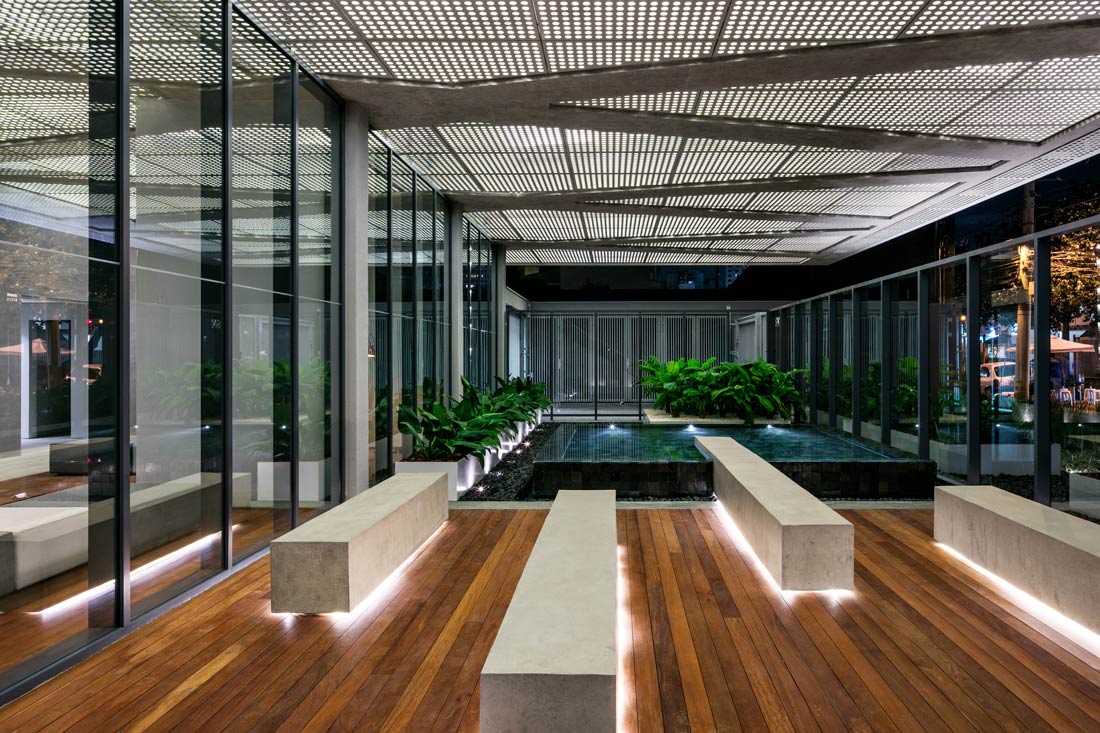 The floors are articulated into two parallel wings and a central communications axis that houses the batteries for two panoramic elevators. The apartments’ main windows provide views to the north and south, with deep balconies to avoid excessive solar radiation. The east and west façades – the most exposed to the São Paulo climate – are mostly protected with opaque surfaces, formed by a ventilated façade made of large-format, enameled ceramic slats. On the sides of the balconies, the ceramic surfaces become lattices that preserve the apartments’ privacy while framing the views seen from the inside. The ceramic’s playful color scheme adds individual chromatic personality to each level while pursuing the singularity of a differentiated qualitative value, as commissioned by the client, who specifically requested a colorful tower. 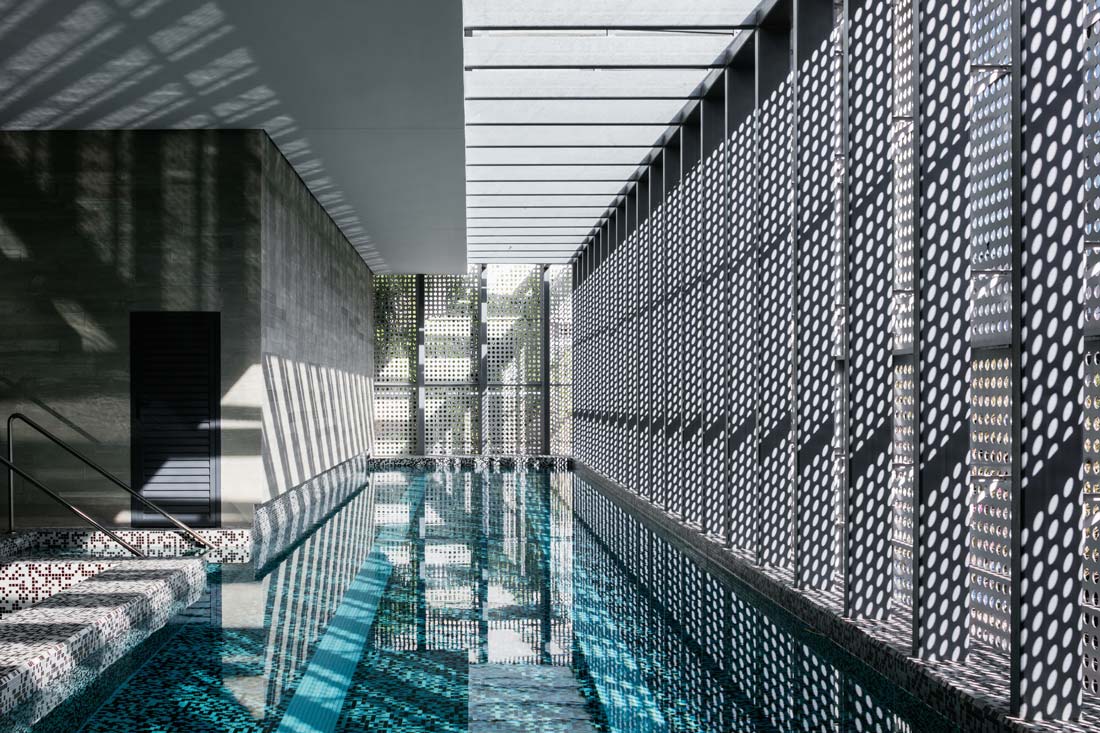 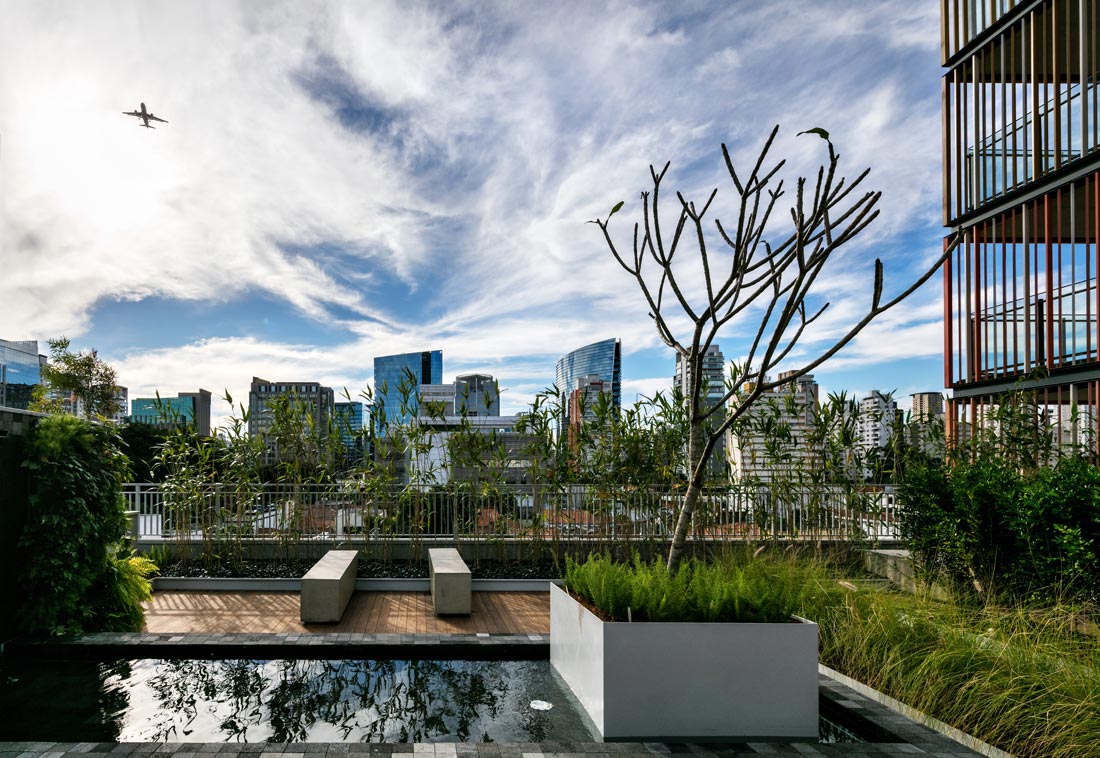 The building thus becomes a slender tower in which the different housing units can nevertheless be recognized by color and by the construction’s framework pattern. On the upper floors, the extension of the central core, along with a group of larger apartments, completes the building in a stepped configuration, merging with the urban skyline while forming a series of large terraces from which to enjoy unbeatable views of the city. 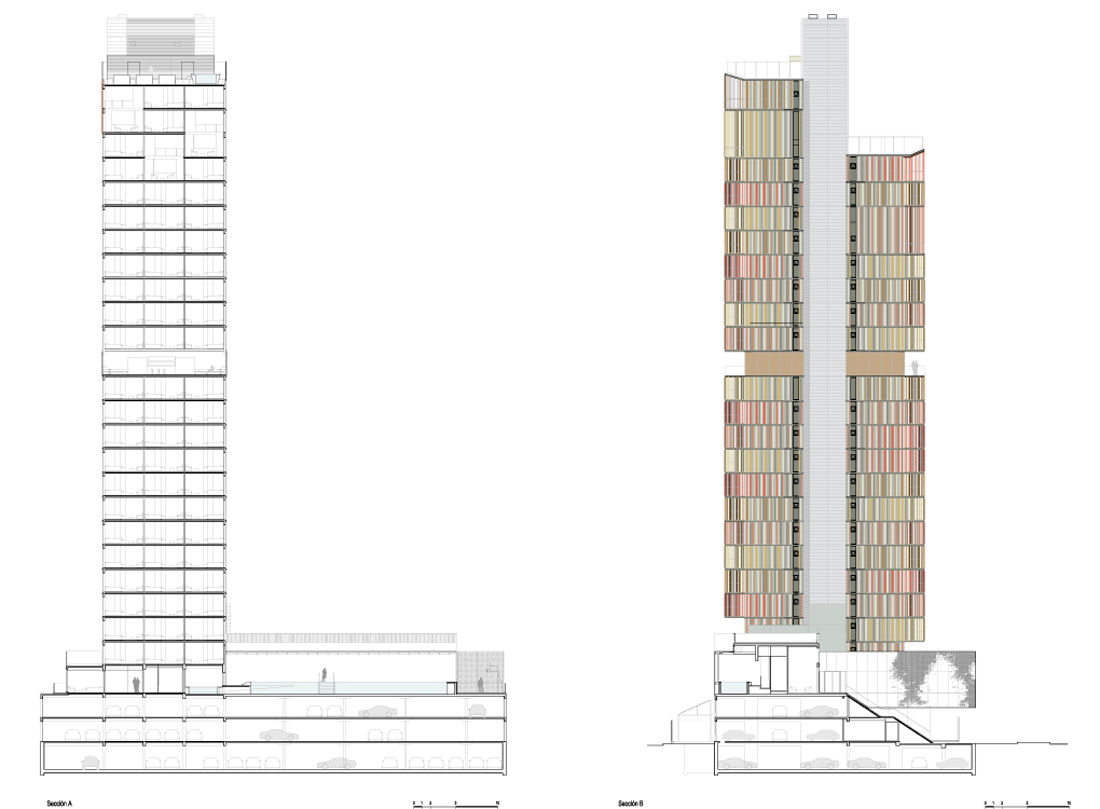 The project has won the Best Tall Building under 100 meters award 2019, granted by the Council on Tall Buildings and Urban Habitat.