Industrial Technology Research Institute (ITRI), located at Central Taiwan Innovation and Research Park in Nantou, Taiwan, is a public research institute promoting industrial innovations in Taiwan, and it is expected to be a central facility for Science Park to be built in this region. Noiz collaborated with Bio Architecture Formosana to enter the design competition for the facility (in April 2010) and won the first prize. During the development phase, the project site had to be relocated once during the design development phase, and the construction finally completed in September 2014. Noiz was in charge of the entire exterior design including building envelope, facade, roofscape and landscape, while Bio Architecture Formosana was responsible for the architectural design. 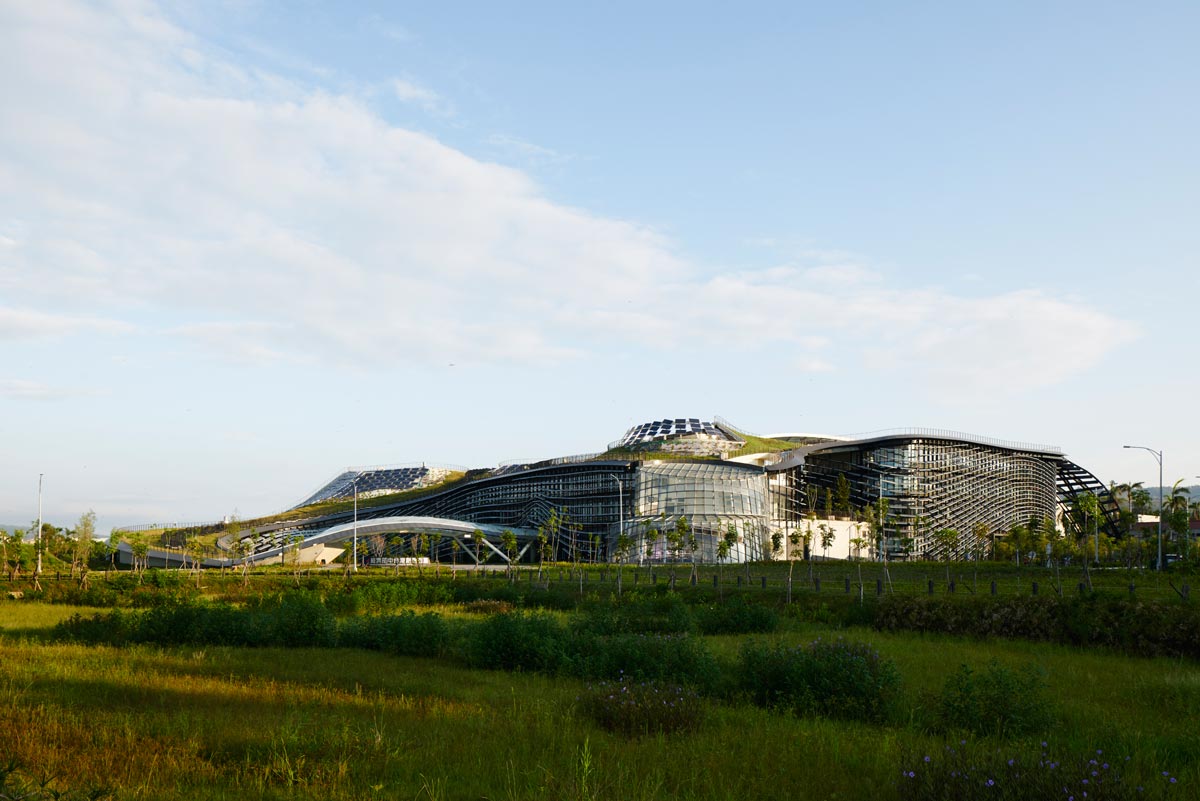 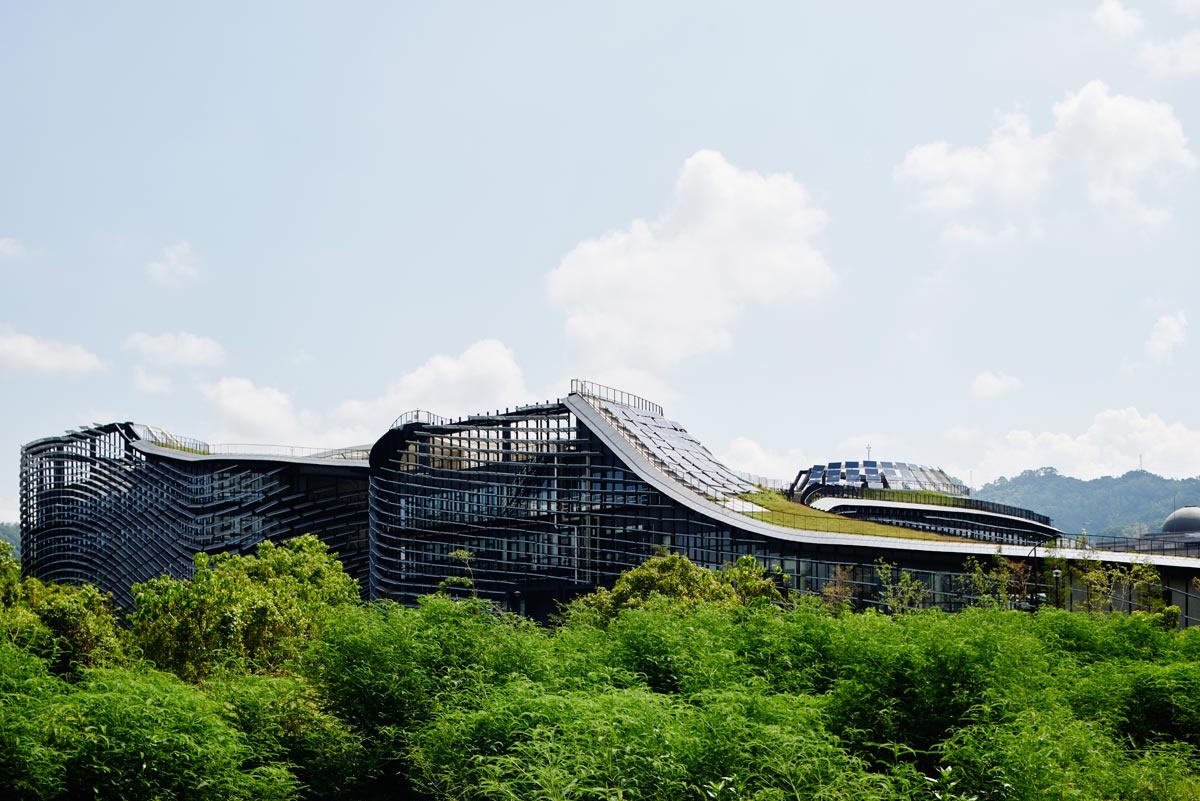 ITRI program included various research laboratories, library, exhibition area of the latest technologies, greenhouse for research, café and so on. The facility is expected to be approved as Diamond class certified building, which is the highest level of the architectural environment classification, and therefore latest technologies were actively incorporated to create environmentally effective architecture serving as the symbol of Science Park, as well as representing advanced technologies of Taiwan.

Different degrees of lightness were required according to the nature of research at each laboratory in this research complex. It was not possible to adjust lightness by changing shape or size of each opening and such solution would also result in a disorganized exterior appearance. In addition, due to heavy-duty building service requirements to fulfill functions of the research facility, numerous ducts and pipes, which numbers and locations will increase in the future, would be exposed on the façades. 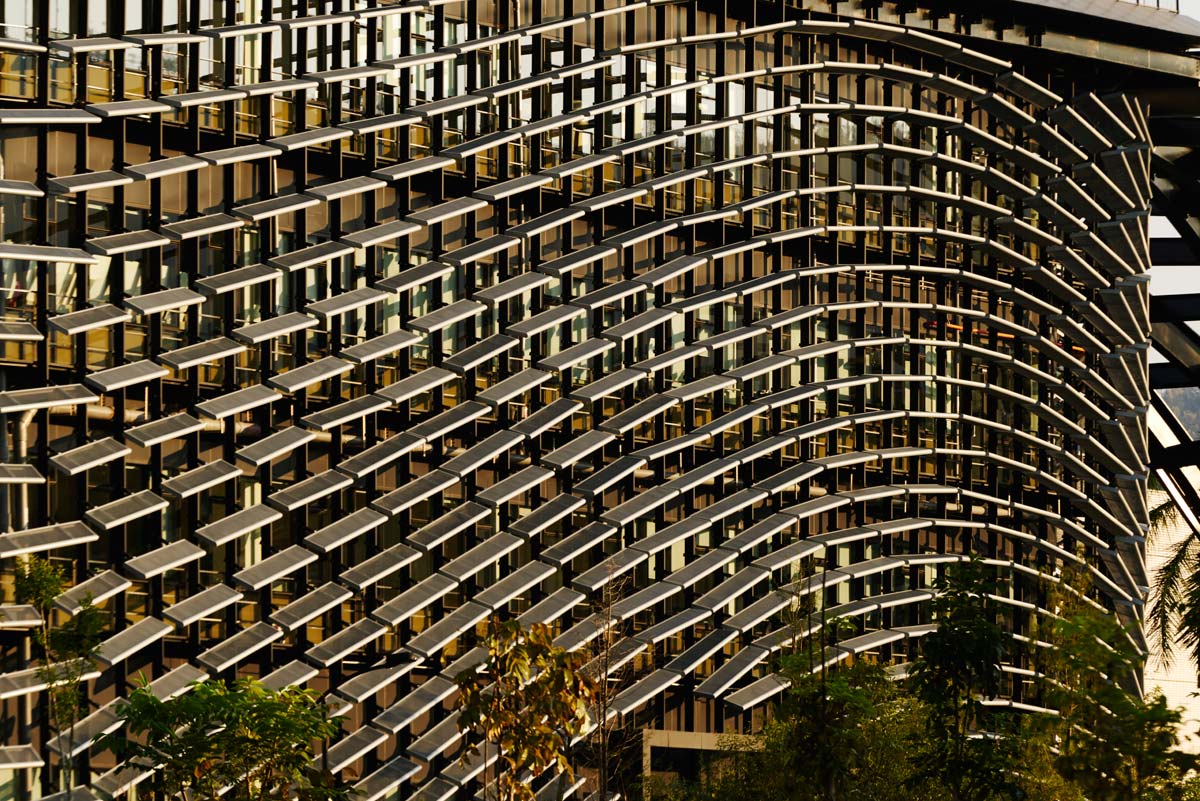 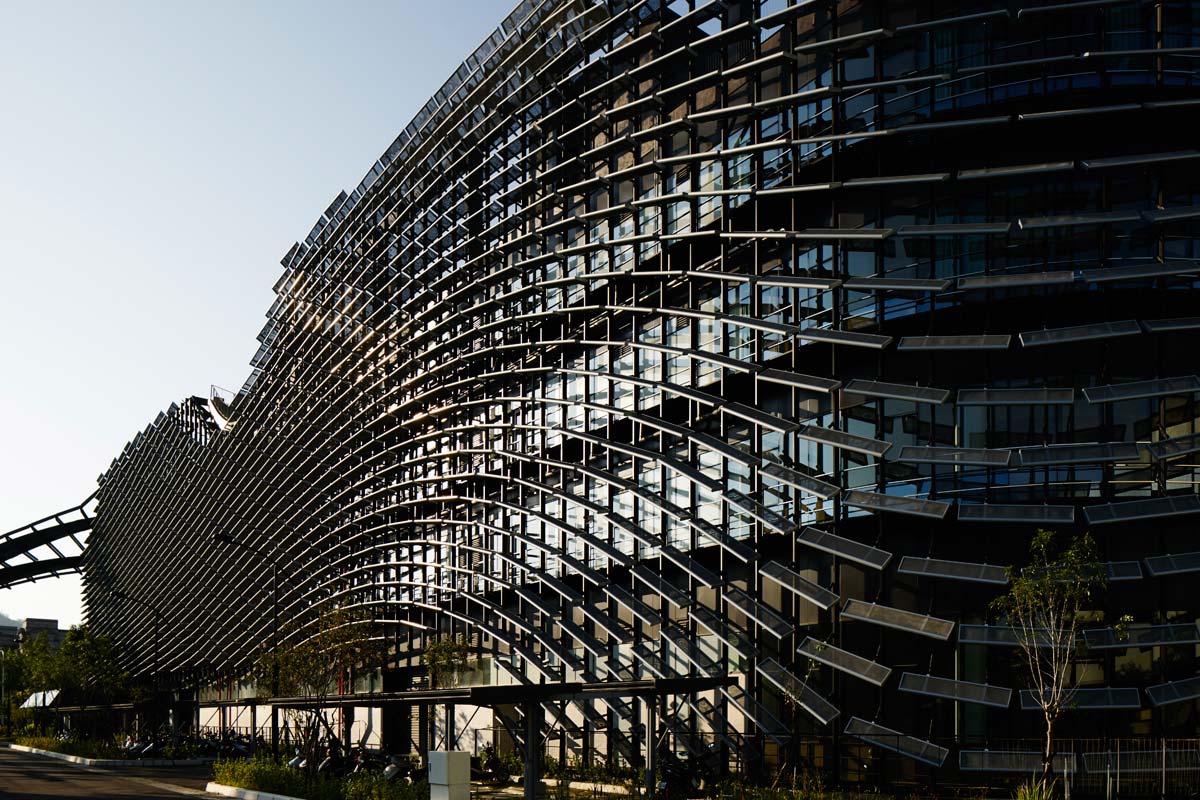 Our design solution was to provide soft veil-like facade layers composed of 4000 fins, which are offset from curtain walls, creating the double-skin building envelope . The double-skin composition allows to hide maintenance space in between, while providing flexibility for future addition of pipes and ducts without affecting the landmark appearance of the building.  We have run various environmental simulations to reach the final 3D patterns of the fin to achieve the maximum ecological, economical and functional values by computational methods. The interior light environment is controlled by adjusting densities and angles of the fins, while the fin system gives the integrated appearance to the facility. 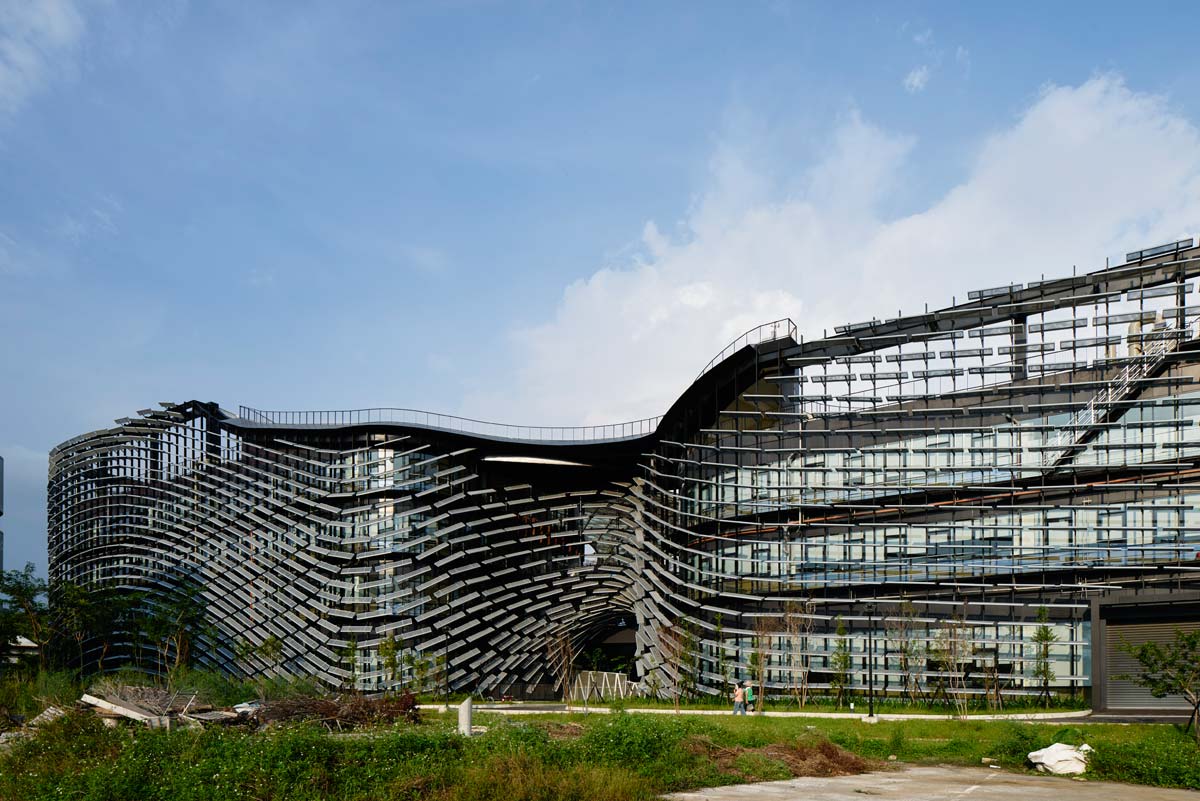 The fins resemble a school of fish- the fins are positioned at various angles, while as a whole creating a large flow and giving a dynamic impression to the building.
The fins are made of expanded aluminum sheet, creating a light-weight impression of the façade while allowing exterior views from the interior to some extent. 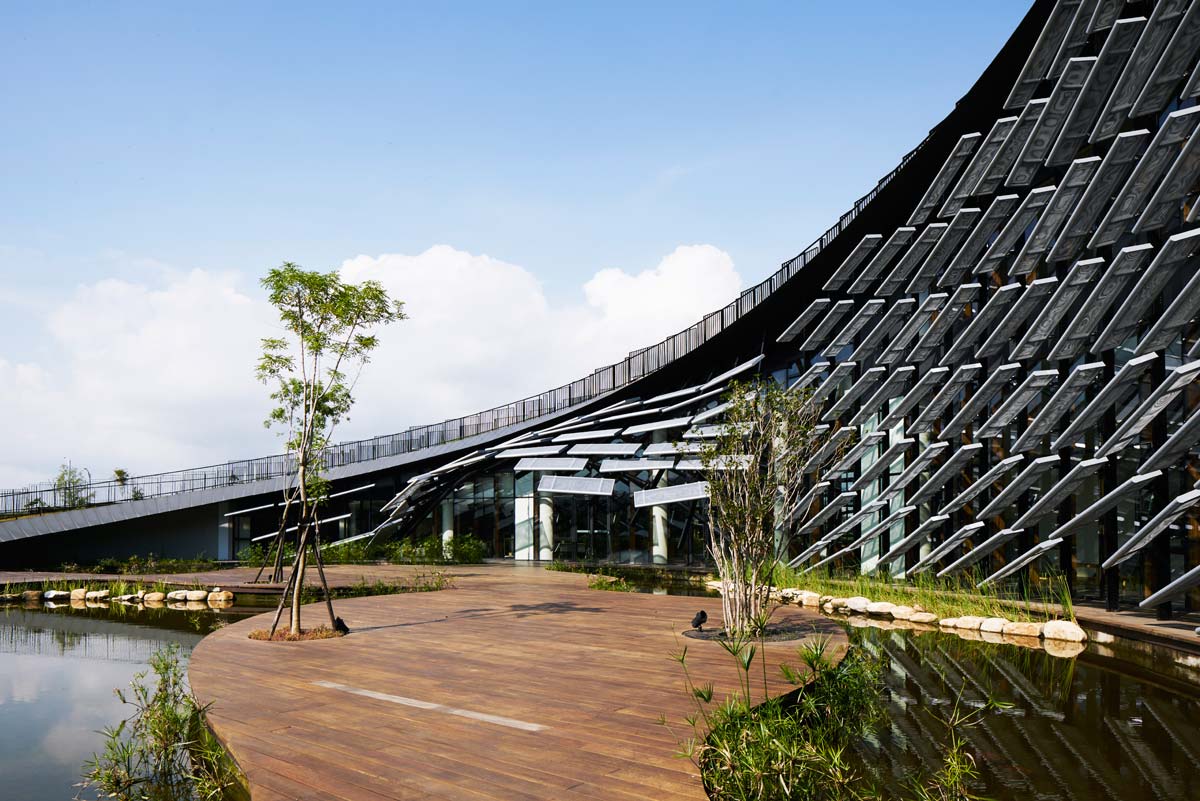 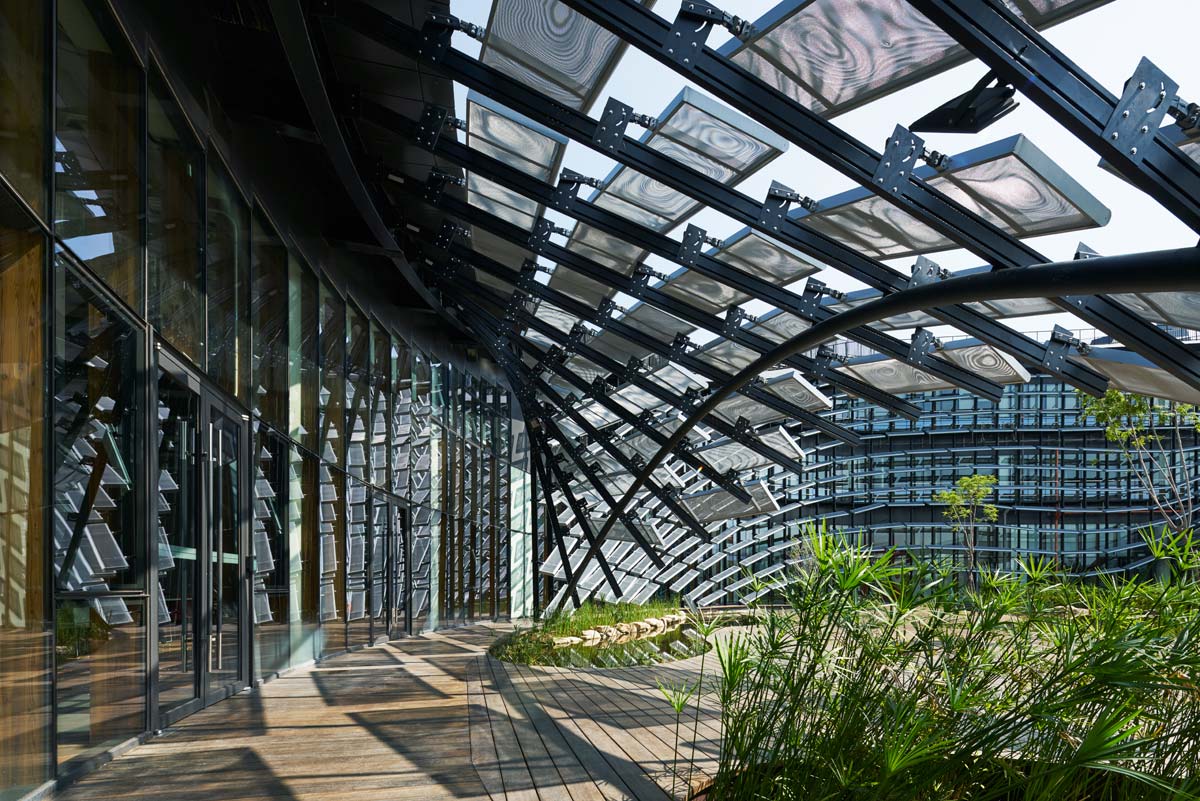 We created a fin-generating program based on various rules including the position of vertical supports, circulation routes, natural light requirements of the adjacent rooms and others. Moreover, due to cost reduction, we created an optimization program with added parameters such as balance of exterior appearance and building cost. And eventually we successfully achieved facades composed of 3 types of fins, which resulted in the substantial cost reduction.

In addition, we proposed a moving façade system changing the entire façade configuration in order to reduce the annual environmental load, as well as creating extraordinary effects celebrating the technological innovation. The façade mechanism is composed of a relatively simple system composed of vertical supports with electric motors embedded on top, and the entire movements can be controlled by adjusting the gear ratio. Noiz and ARUP collaborated to develop the moving facade system to the construction drawing stage, but in the end, it was not realized due to the construction cost.  Although the idea of kinetic and interactive facade system was not realized this time, we believe that it will effectively improve the architectural environment and functions as well as activating more humane interactions, and continue to further explore this aspect with other projects such as FLIPMATA. 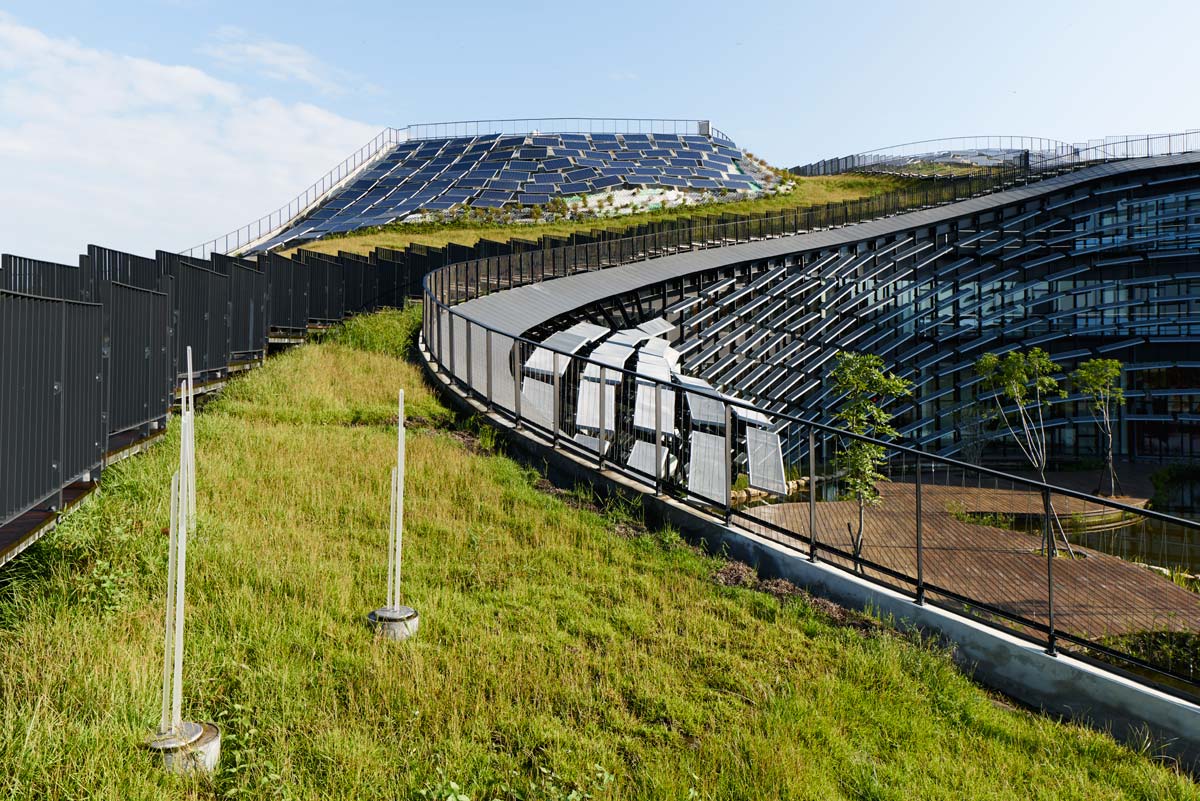 We also developed a marking system of fin positions on the facades by using the project mapping technique. Some errors and inaccuracies in dimension inevitably occur during building construction. Precise measurements of the building are required in order to indicate precise positions of fin installation, and buildings with complicated forms would require considerable labor. In addition, if the marking of fin positions would be done based on numerical values on drawings, the work would take an enormous amount of time and labor to measure and mark them one by one manually on site.

However, the marking process can be effectively simplified by capturing the building form using a camera and indicating precise locations onto the building surface using the project mapping method. 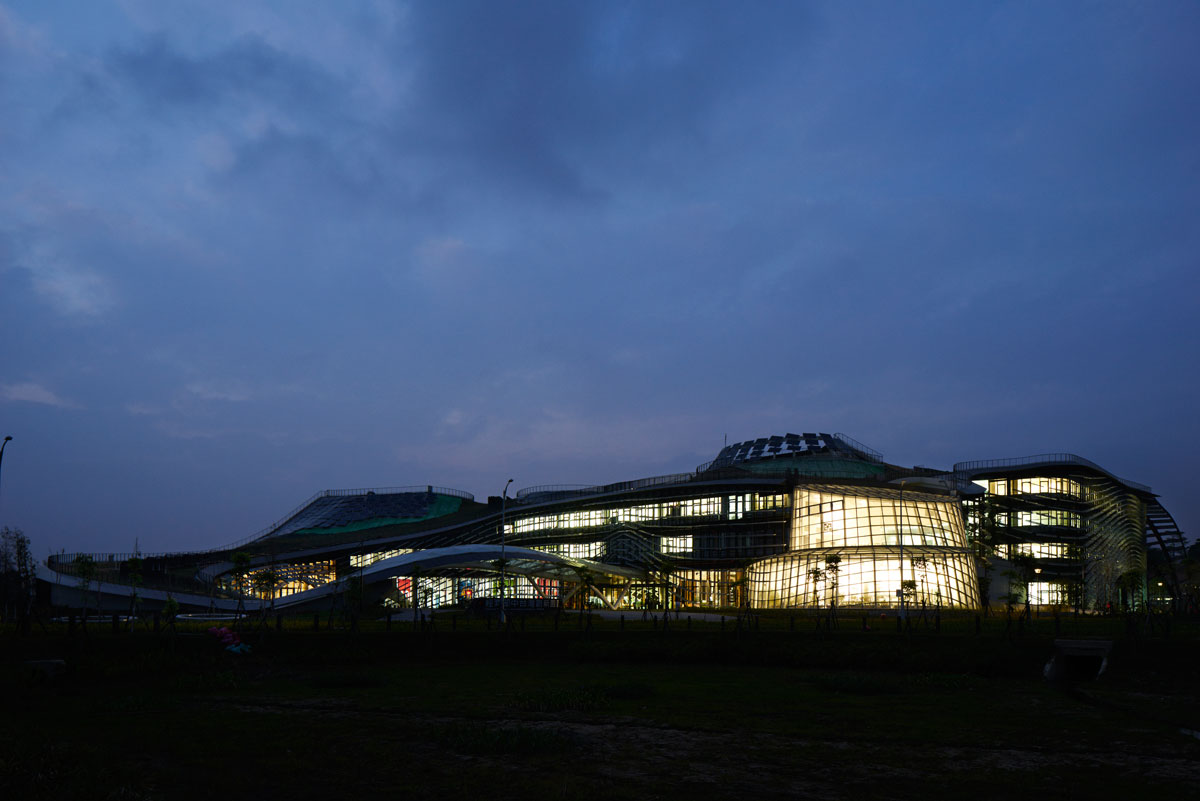 We were not able to verify the working time and the degree of precision in time for this construction, and the proposed marking method was not implemented this time. However, we expect that the method will be fully put in practical use in the near future. 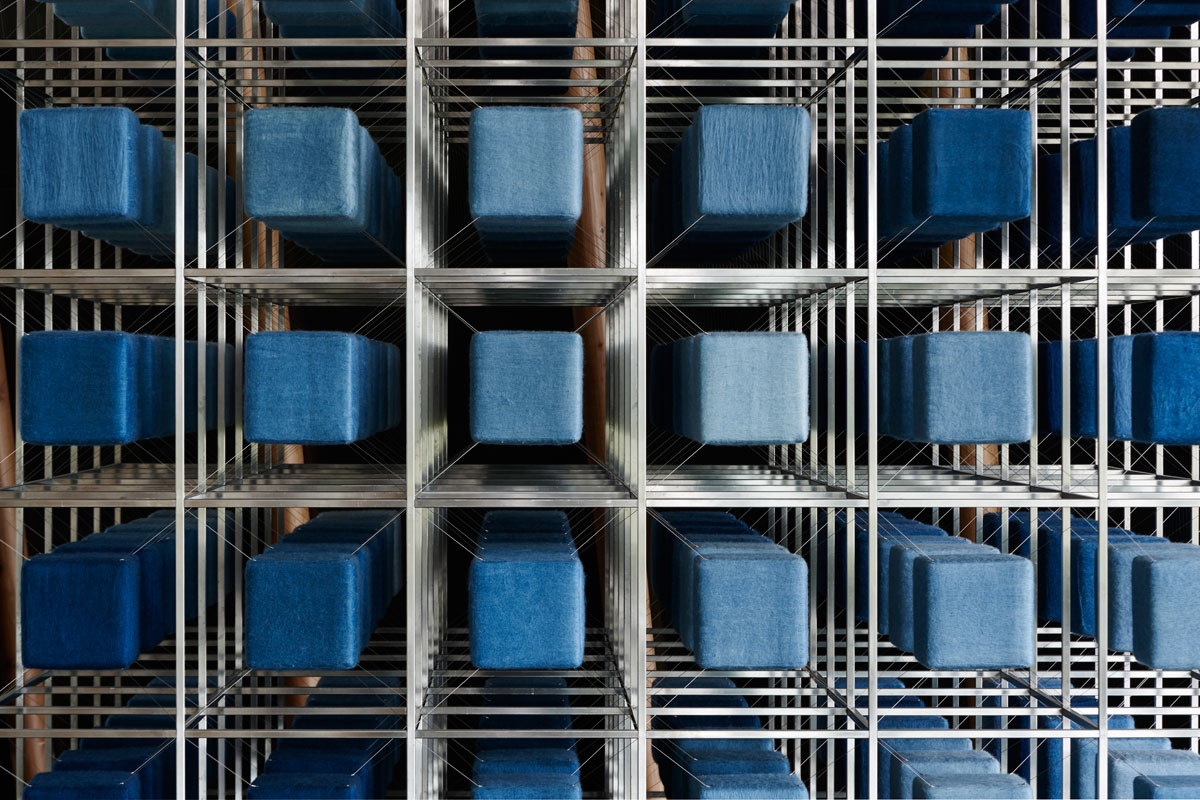 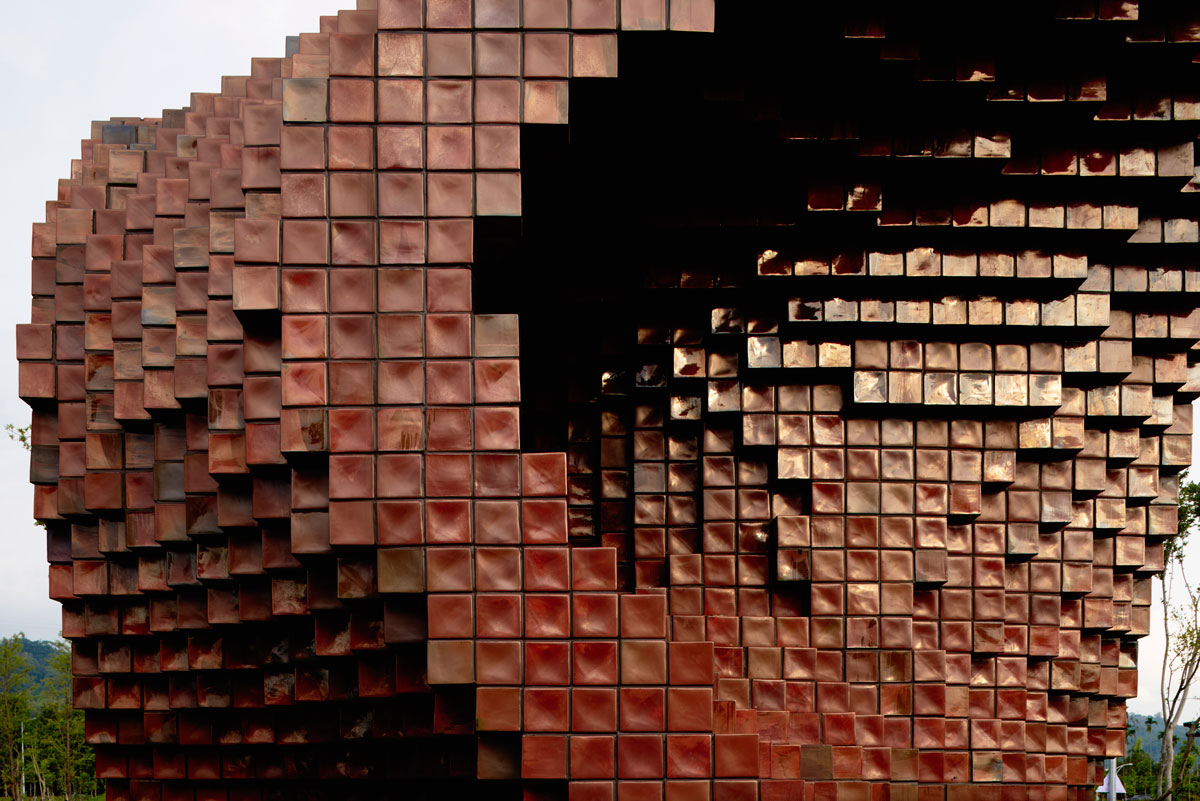 Steel plates are stacked layer by layer above the reinforced concrete foundation, and then ceramic units are fixed to the steel plates. The steel plates are supported by steel pipes, which locations are verified by 3D computational analysis.
In order to reinforce horizontal steel plates, vertical steel plates are inserted. There different types of steel plates are used: single level, double level, and tripel level. These three-dimensional forms are generated by inputting above lines: algorithm generating complex output from simple input. Composition of steel pipe structure. Each member has a unique length and joint angles, which are all computer-controlled. The units are composed of main ceramic volumes and three types of special metal parts. Location and types of parts are determined by computational simulation. 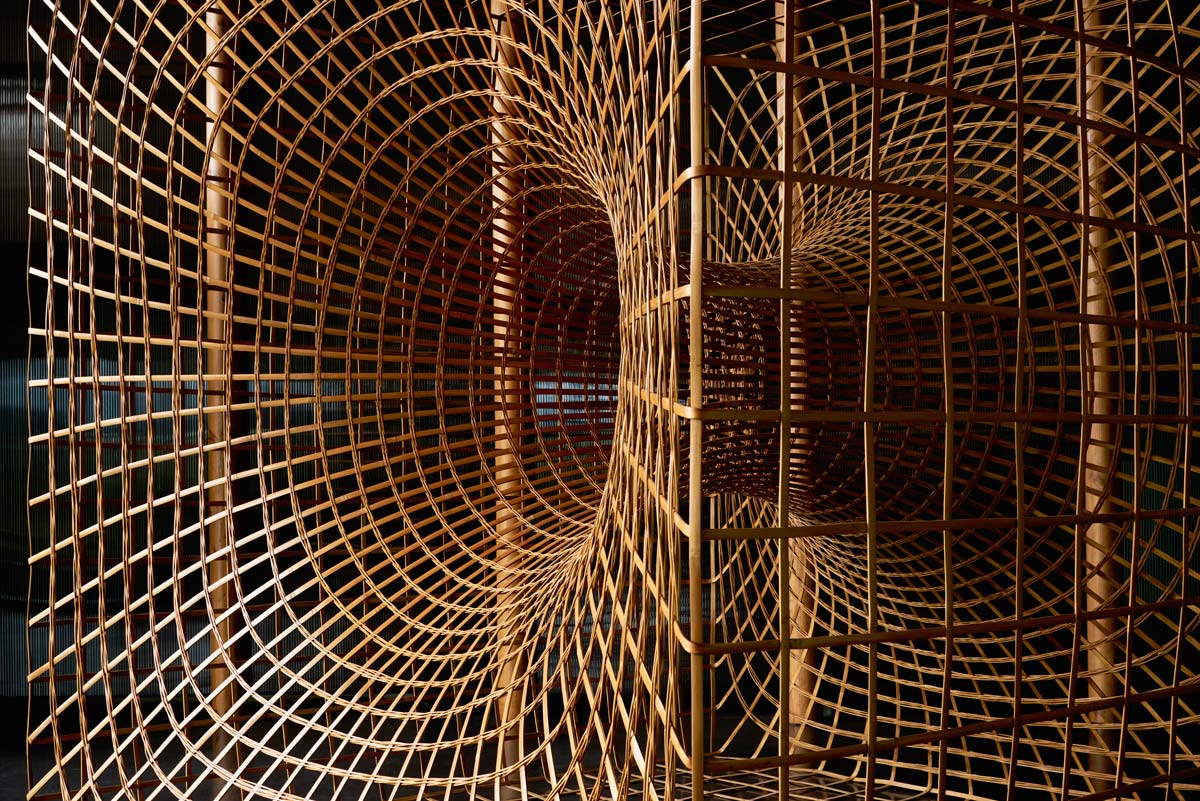 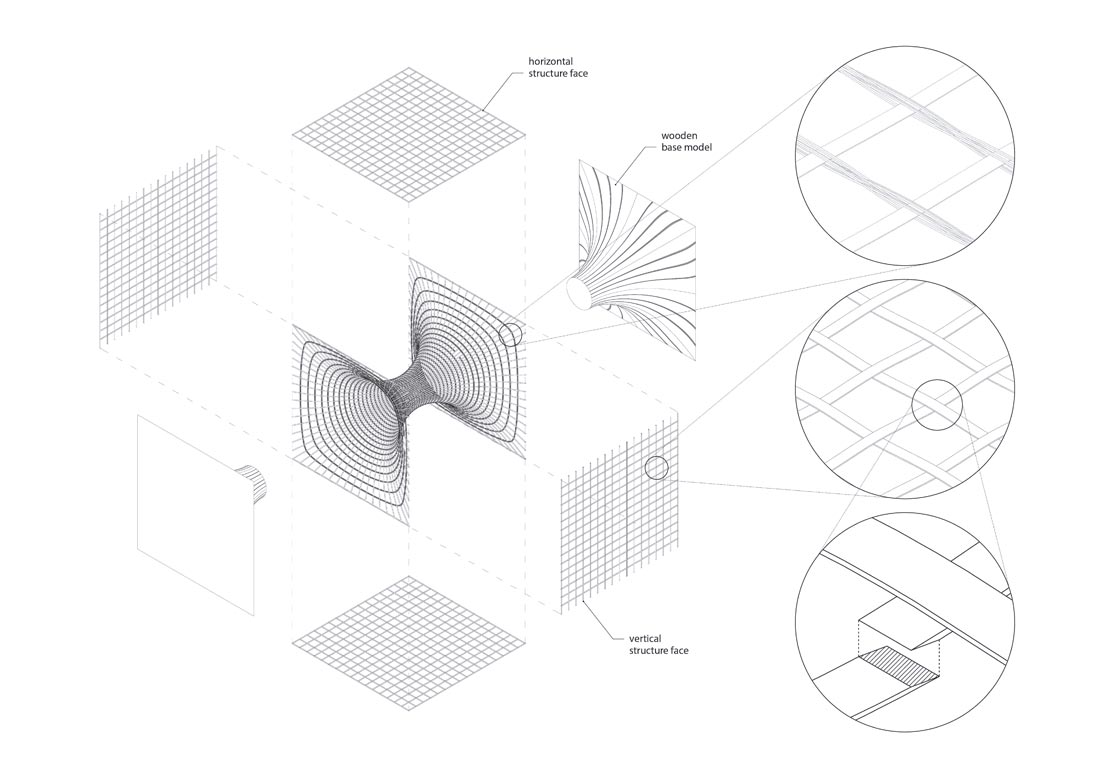 Different weaving methods are applied according to direction and degree of curvature. Bamboo strips are woven around the base model made of the “hole” part and vertical structural supports.