Strasbourg has had the status of European capital since 1948; it is the seat of the European Parliament and of the European Court of Human Rights. The city’s authorities quite naturally decided to accept a proposed educational offer designed to meet the expectations of the European and international civil servants working in the city by creating a European school. The school’s educational model, based on a multicultural approach, wide use of different languages, and emphasis on both children’s autonomy and parents’ involvement, covers a full school curriculum, from nursery school right through to the European baccalaureate. The school is located in the leafy neighbourhood of Robertsau, near the European and international institutions. The school has nearly one thousand pupils and, to meet its requirements and those of local residents, the municipal authorities in Strasbourg decided to build an open sports centre. The programme called for the creation of a multi-sport hall and a multi-purpose hall capable of serving as a venue for events not involving sports. 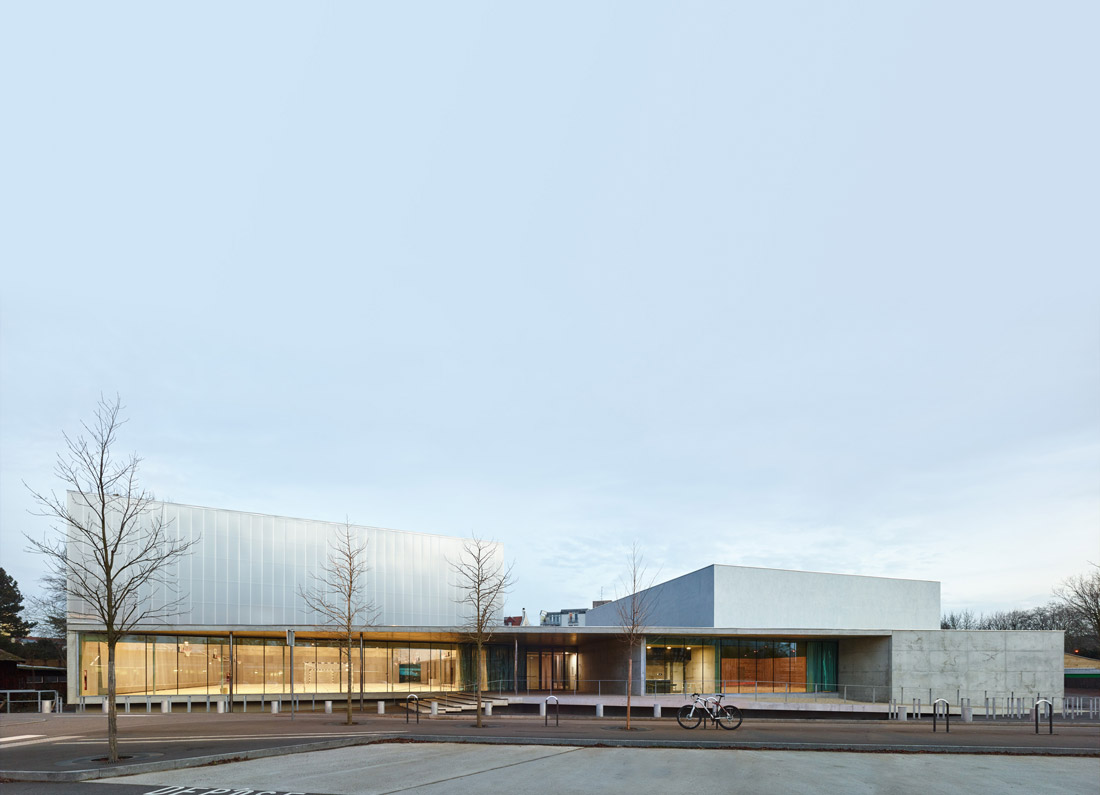 Beyond the actual architectural and functional qualities of the building, the sports centre generates a balance and establishes a dialogue with the European school. It prolongs the logic of the fragments already used for the school building. The volumes of the two halls are dissociated and angled, which makes it possible to set the larger hall in an ideal position: perpendicular to the street on the northern edge of the site. Its position minimises the building’s impact on the site and its full depth is used. The shorter side of the building gives onto the street, making it more porous in relation to the landscape.

The entrance hall is transparent, allowing sight from the forecourt through to the wood at the back of the site. The elements of the programme form a crown, with changing rooms and other premises surrounding the two halls and providing views both to the outside and among themselves.

The project makes careful use of rough, durable materials: architectonic concrete, galvanised steel, glass and linoleum. The multi-sports hall plays on the grey shades of these materials. 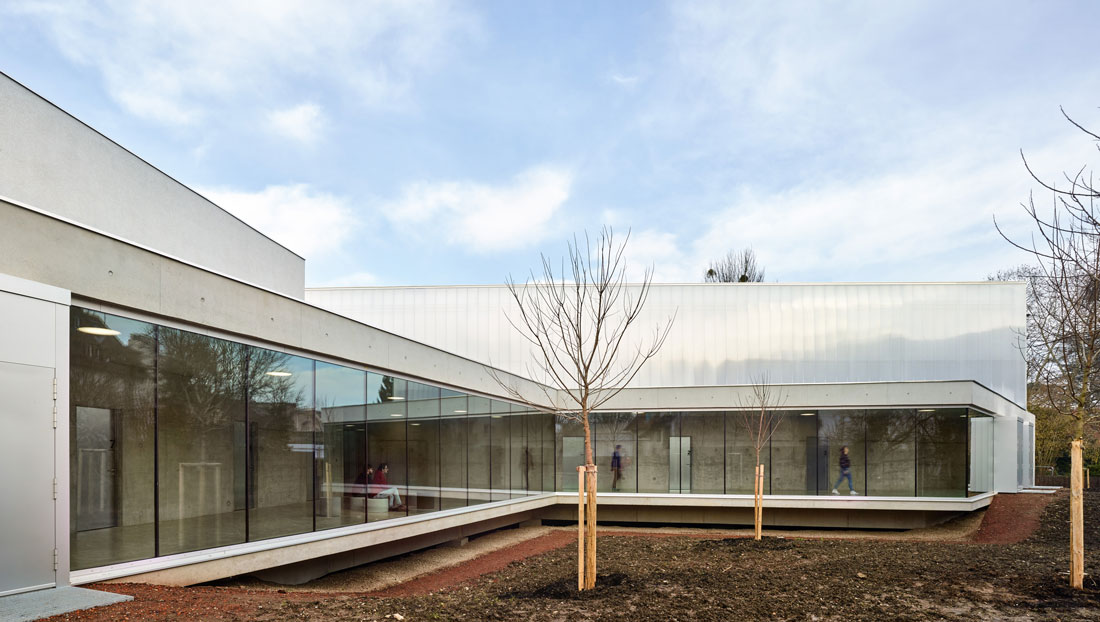 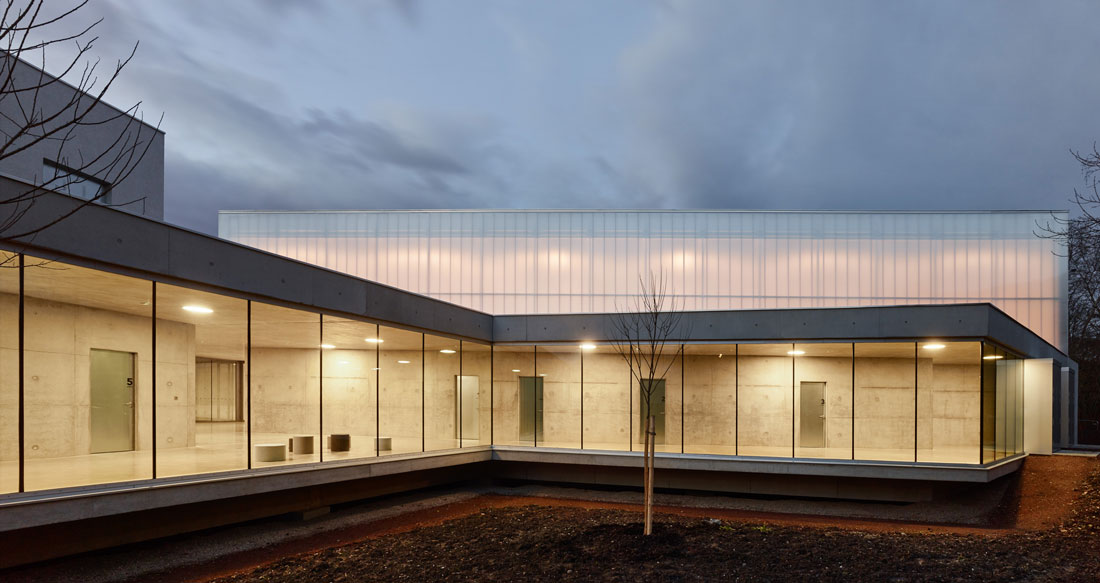 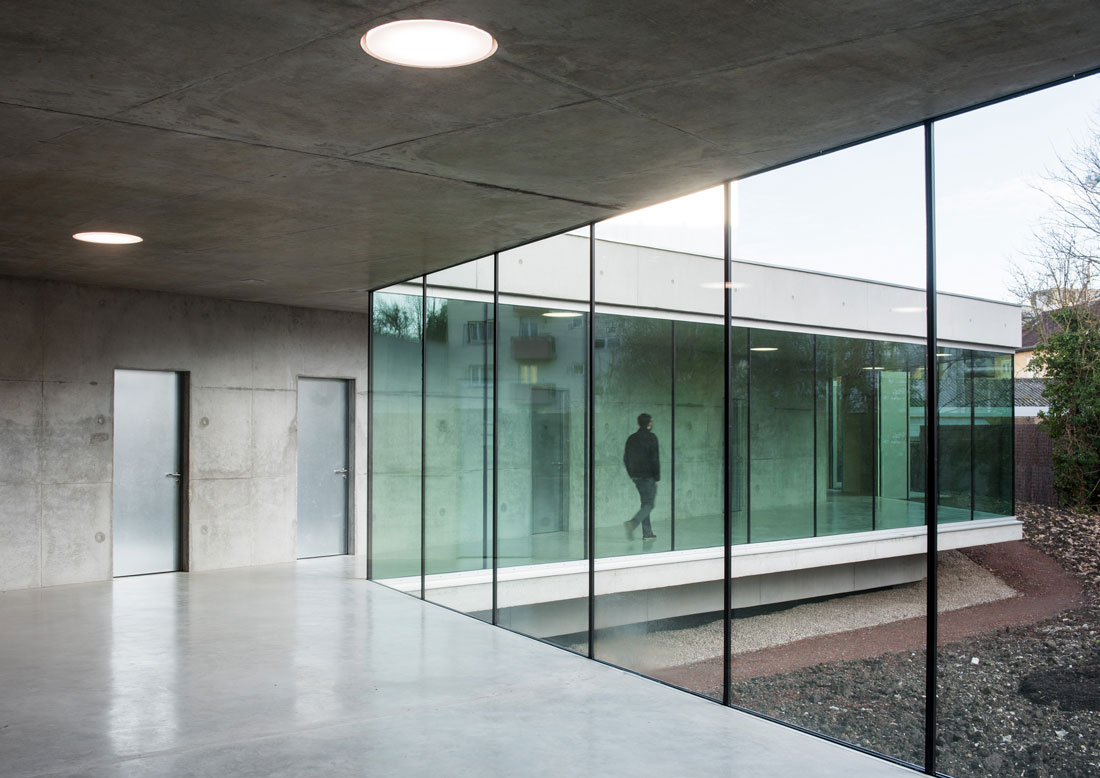 The building lies on a north/south axis, which is the best way to control natural light, while large expanses of polycarbonate provide and disperse gentle, even light throughout the hall, with no risk of dazzling or bothering users.

Particular attention has also been paid to the acoustics: up to a person’s height, the walls are finished with perforated coloured MDF panels, and the entire ceiling has been treated. Duckboard panels in galvanised steel placed between the beams create a meshed false ceiling, in this manner, the technical elements are protected, while the lamps can illuminate the hall.

The square multi-purpose hall is designed to contrast with the rest of the building. The varnished oak parquet floor laid in a checkerboard pattern curves upwards at the wall, and the upper part of the walls is covered with acoustic plaster. The coffered ceiling repeats the checkerboard design of the floor. The entire double height of the hall is coloured dark green, enhancing the warmth of the oak. 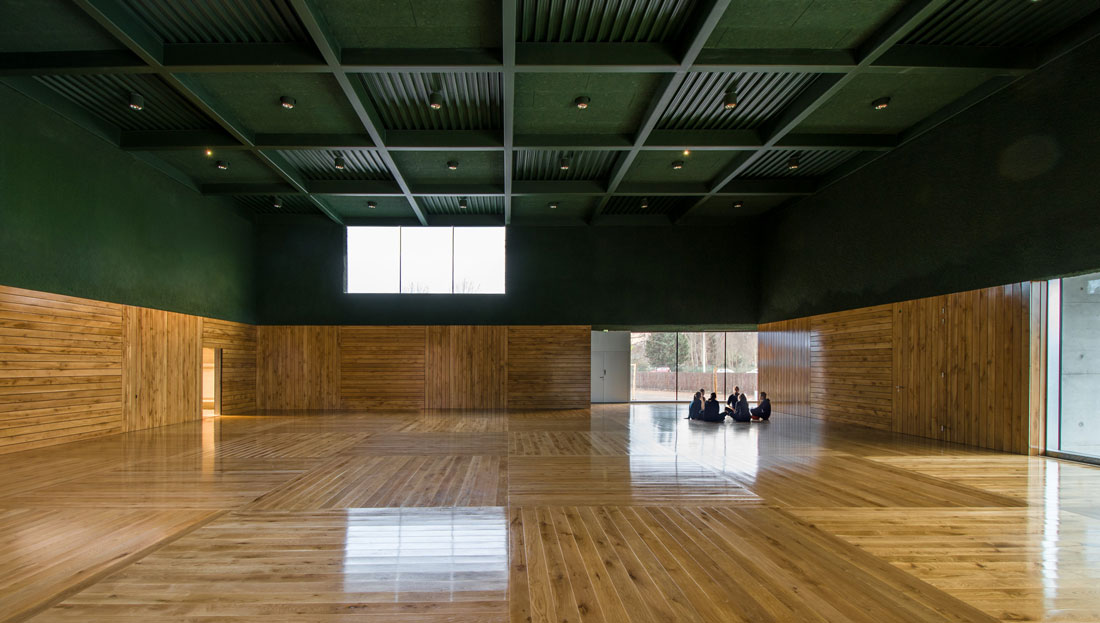 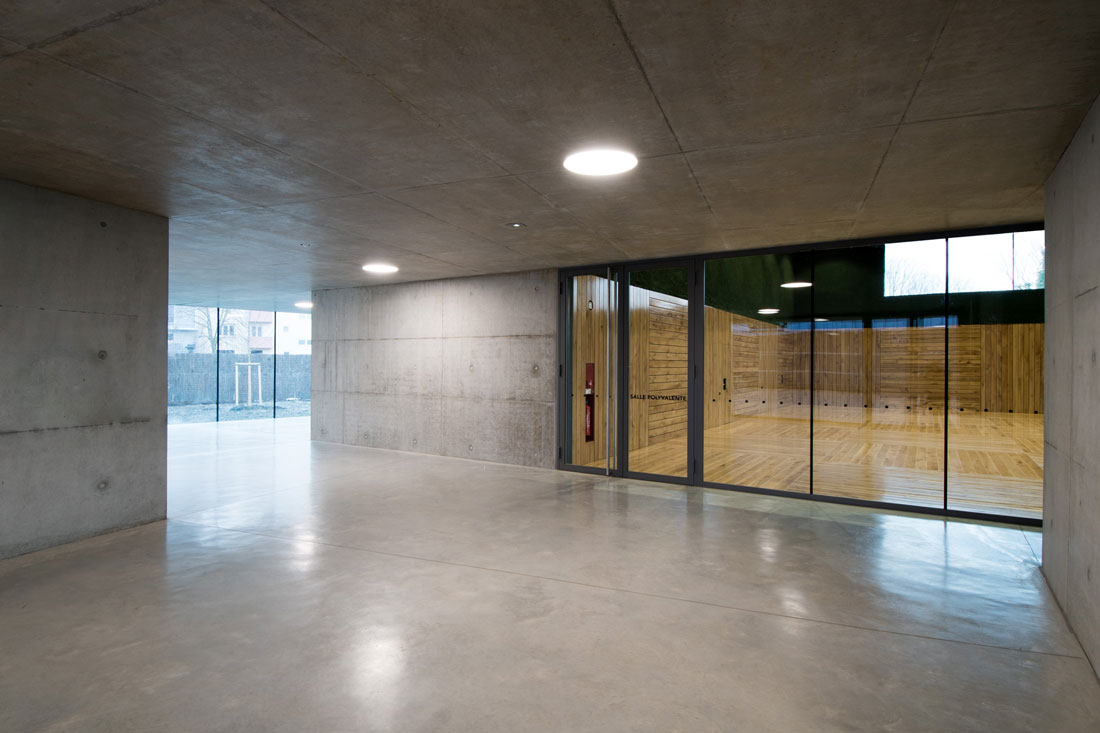 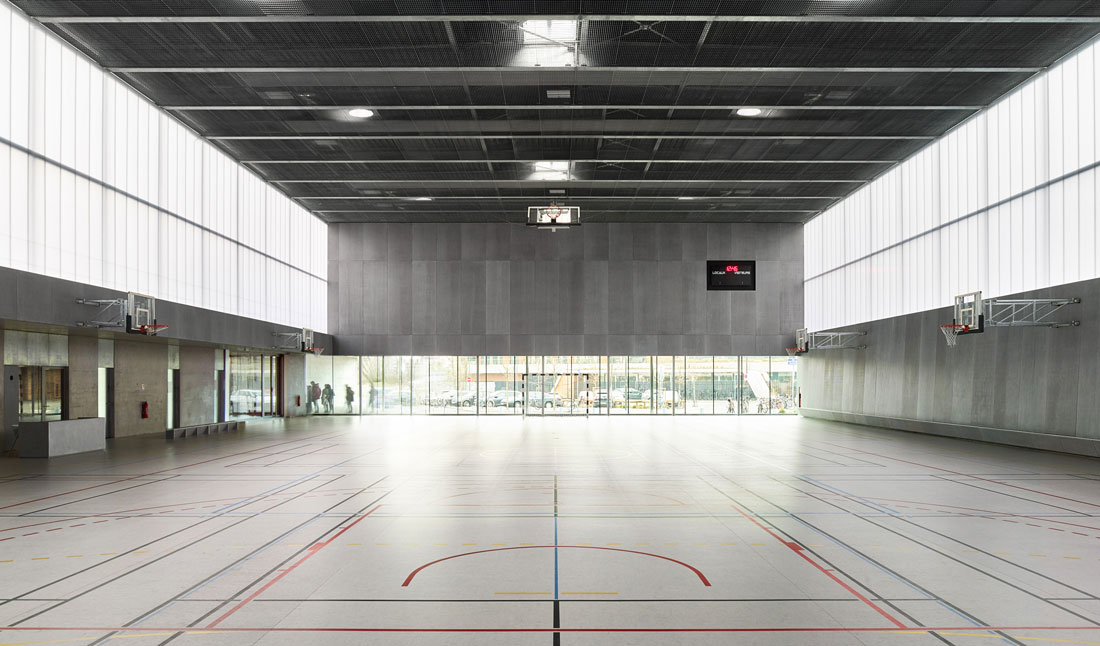 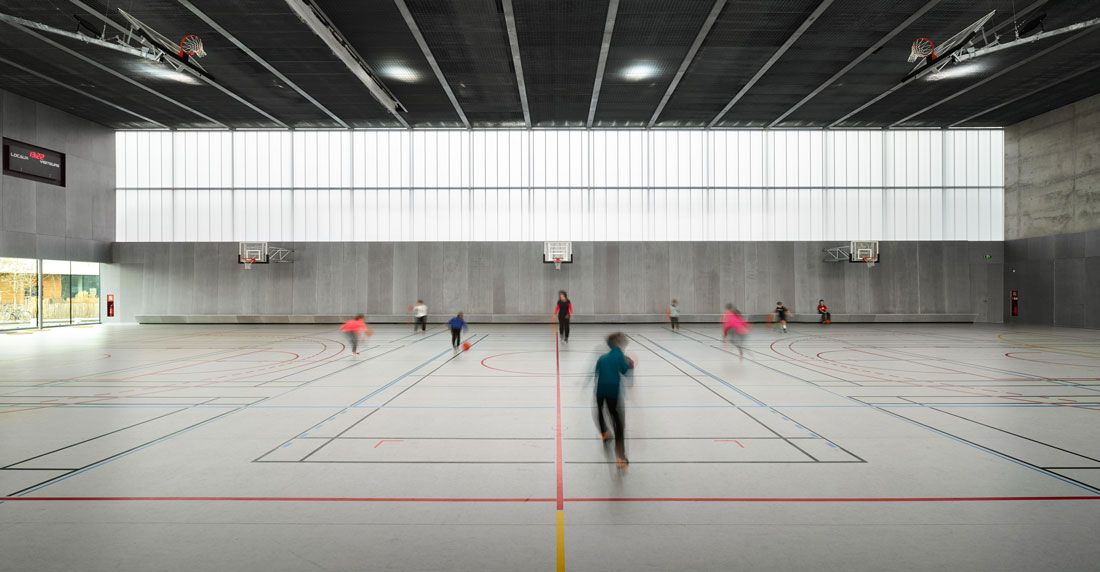 Depending on the light, the variations in grey featured in the project range from milky and rough to transparent and reflecting: perception evolves as the day draws in, setting up a valuable dialogue with nature. The presence of plants and the resulting quality of the light lend a precious elegance to the spaces. 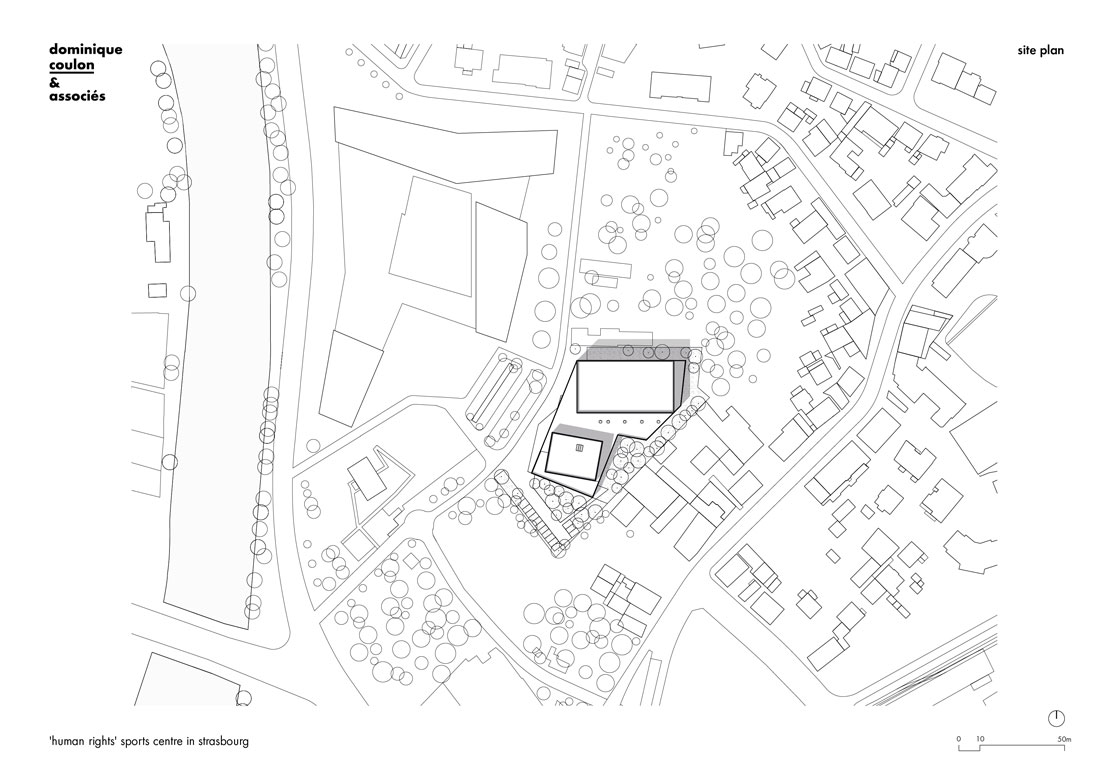 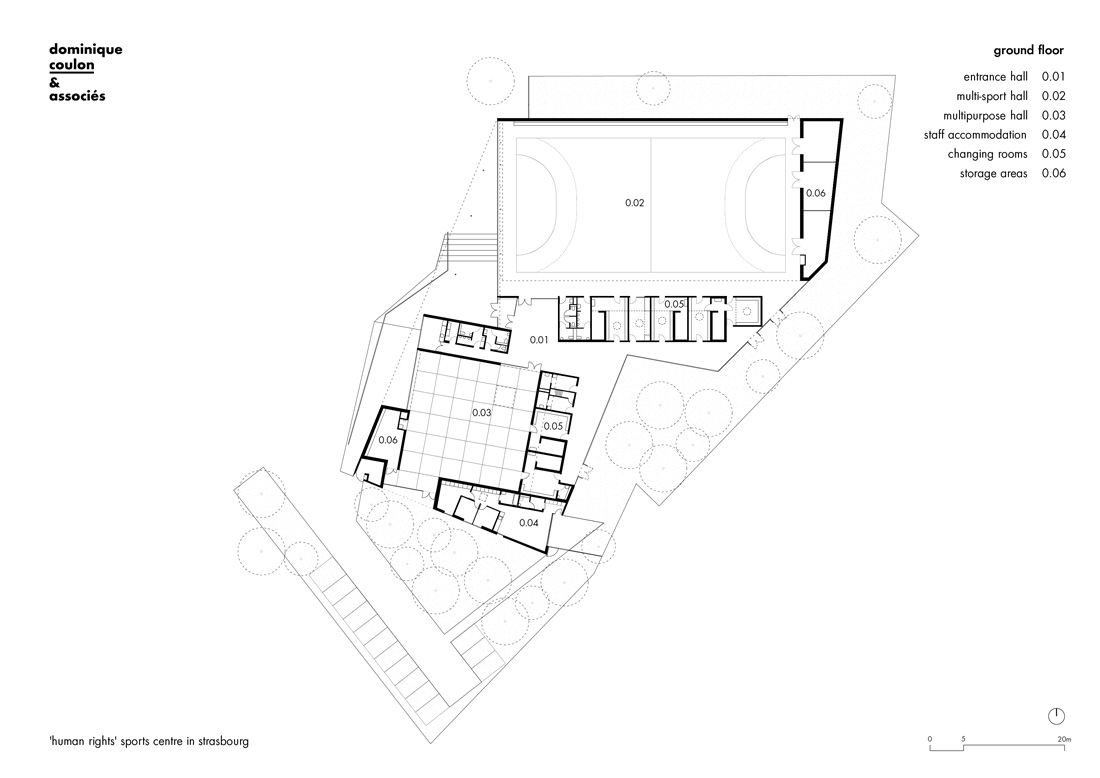