Conceived as a place that is both real and ideal, the House of Contamination is an experimental museum designed to host Artissima’s curatorial programme “Poetry in the Form of a Rose”. 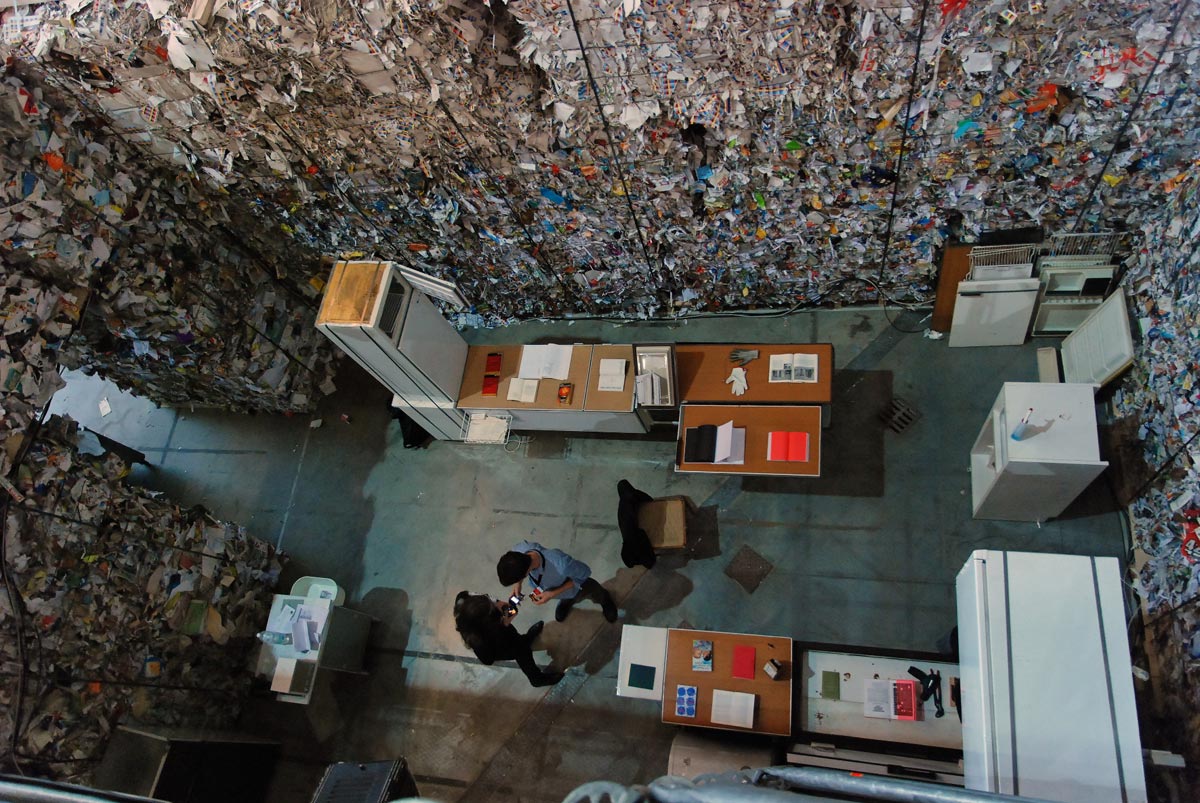 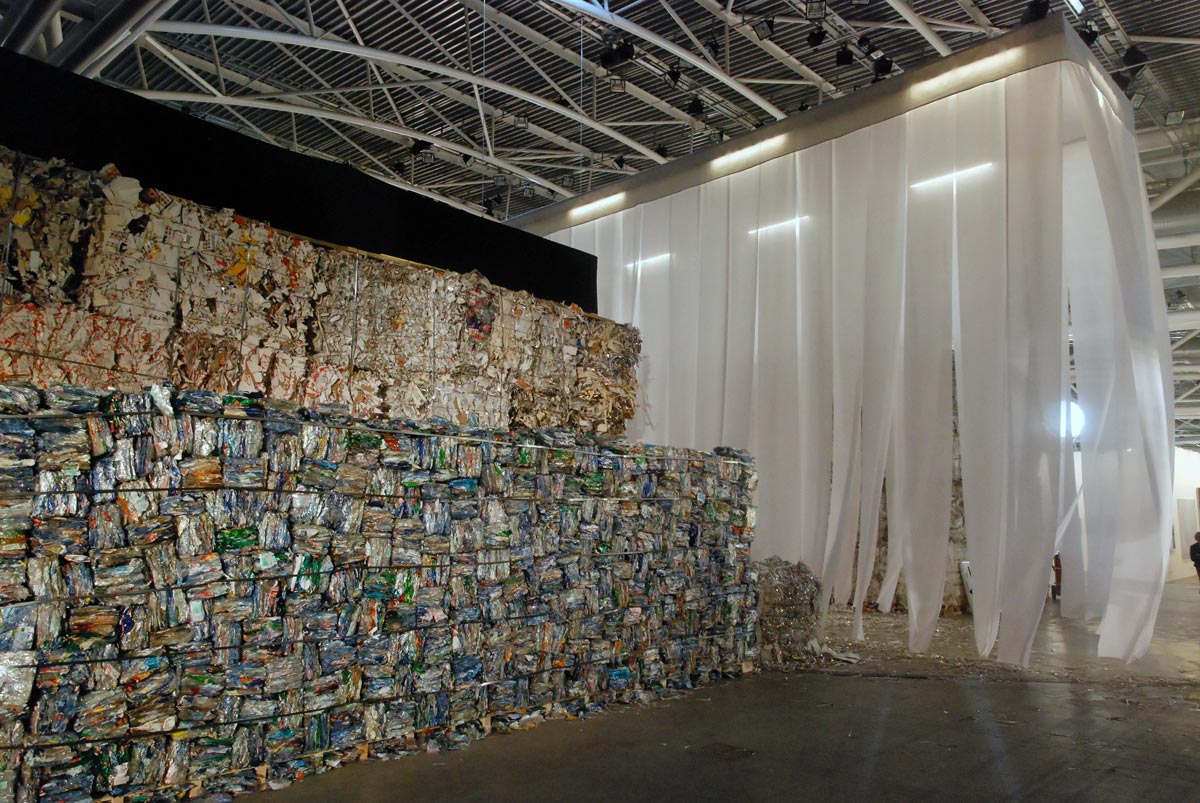 Located inside the vast area of the Oval Linghotto, the large temporary structure hosts a number of spaces for each of the art disciplines investigated: dance, cinema, literature, design, urbanism and education. A ‘project within a project’, the House of Contamination is conceived as a model, a prototype of a contemporary cultural centre. 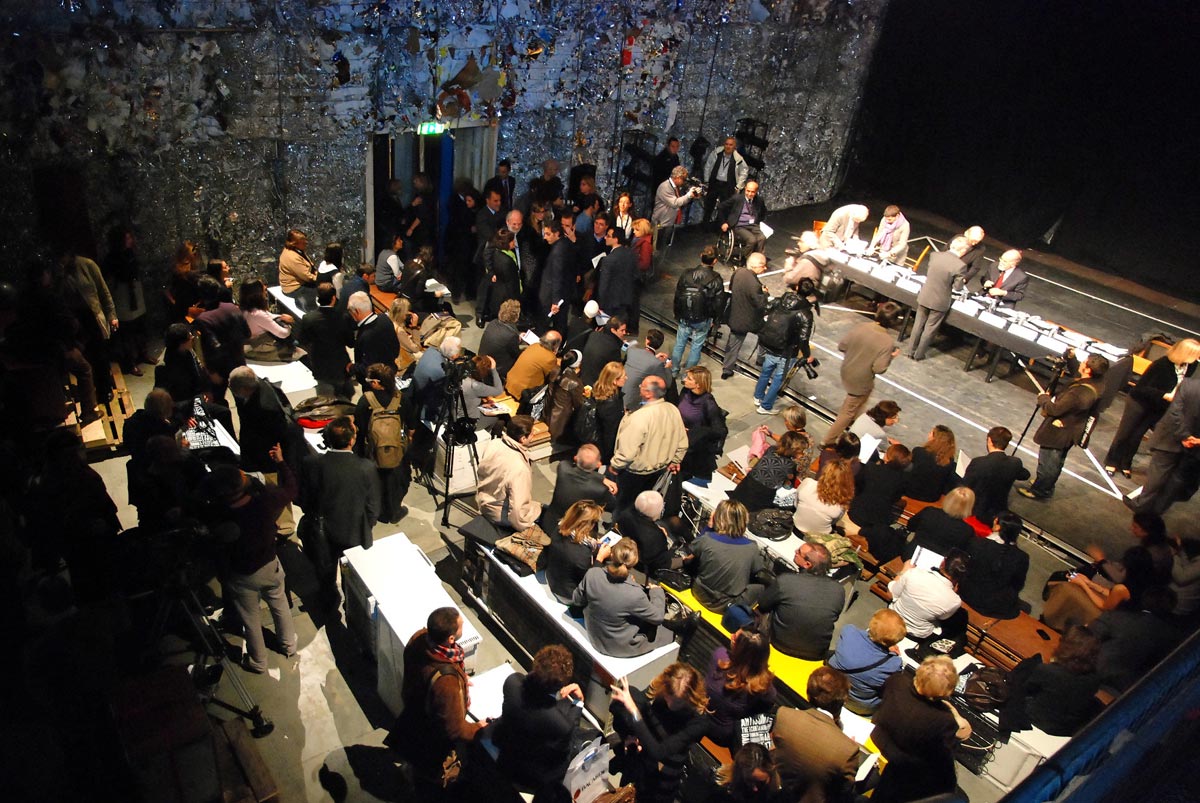 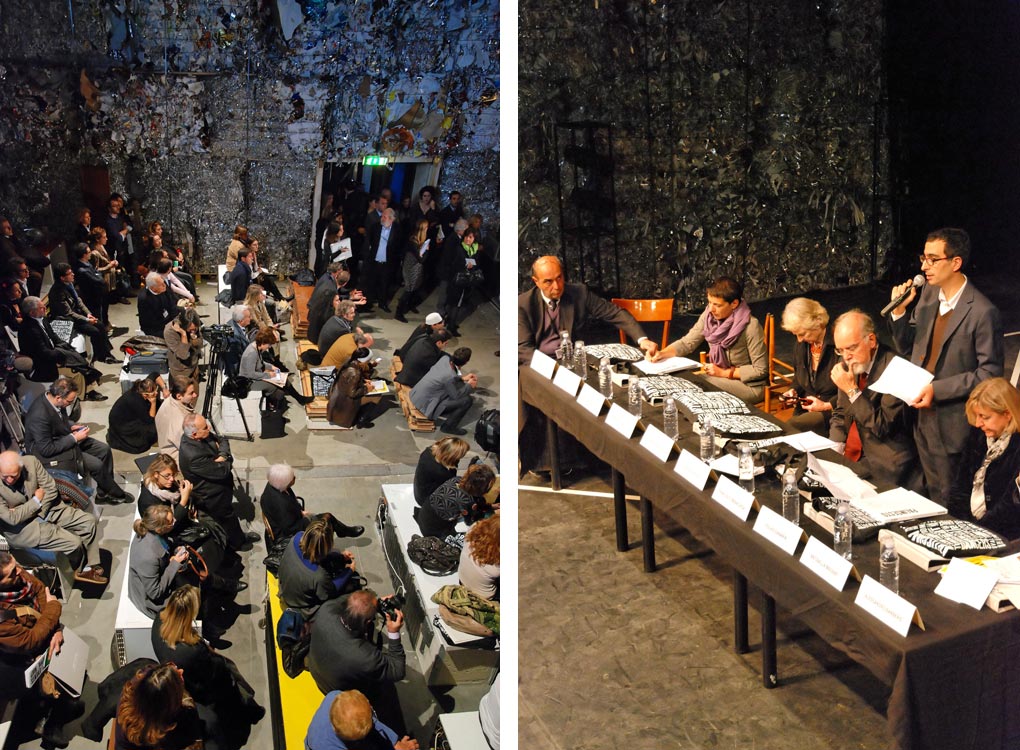 One of the main references for the House of Contamination is Cedric Price’s “Fun Palace”, a future-embracing design for a cultural centre that is multifunctional, highly technological, and adaptable to multiple needs. The expectations with regard to technology have changed since then. Today’s keyword is “peak oil”, standing for a range of bleak scenarios of radical change in the political and economic world that are starting to contaminate the cycles of production and consumption. The House of Contamination is an update to the 20th-century cultural centre. 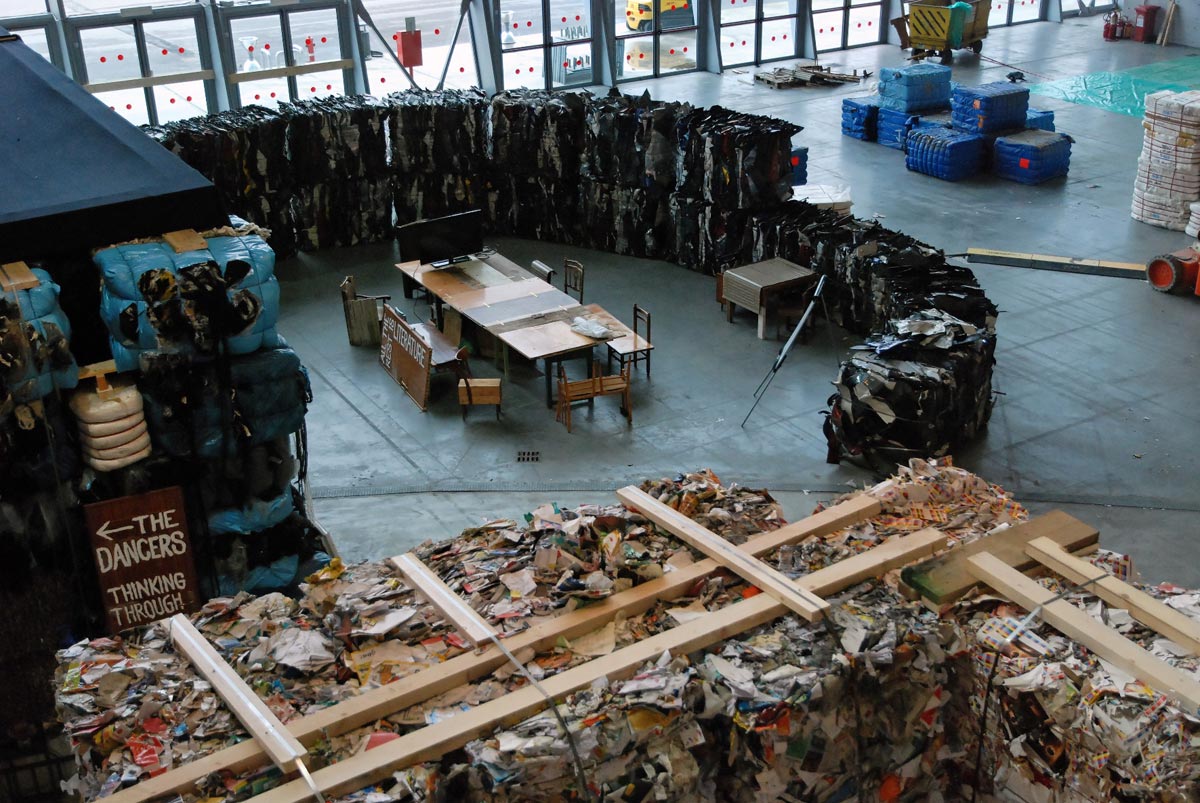 The life span of a thing as a product becomes shorter and shorter. Things are produced, traded, consumed and thrown away. As soon as a thing has been thrown away, it becomes something else: trash! The redefinition of a product / good as trash is irreversible. The thing enters a new economy, and totally different regulations and laws apply. For example: trash may not be used / gathered / displayed in public spaces. Even though access is regulated, an art fair is by definition a public space. To make House of Contamination possible, negotiations with the regional government were necessary to gain exemption and permission. 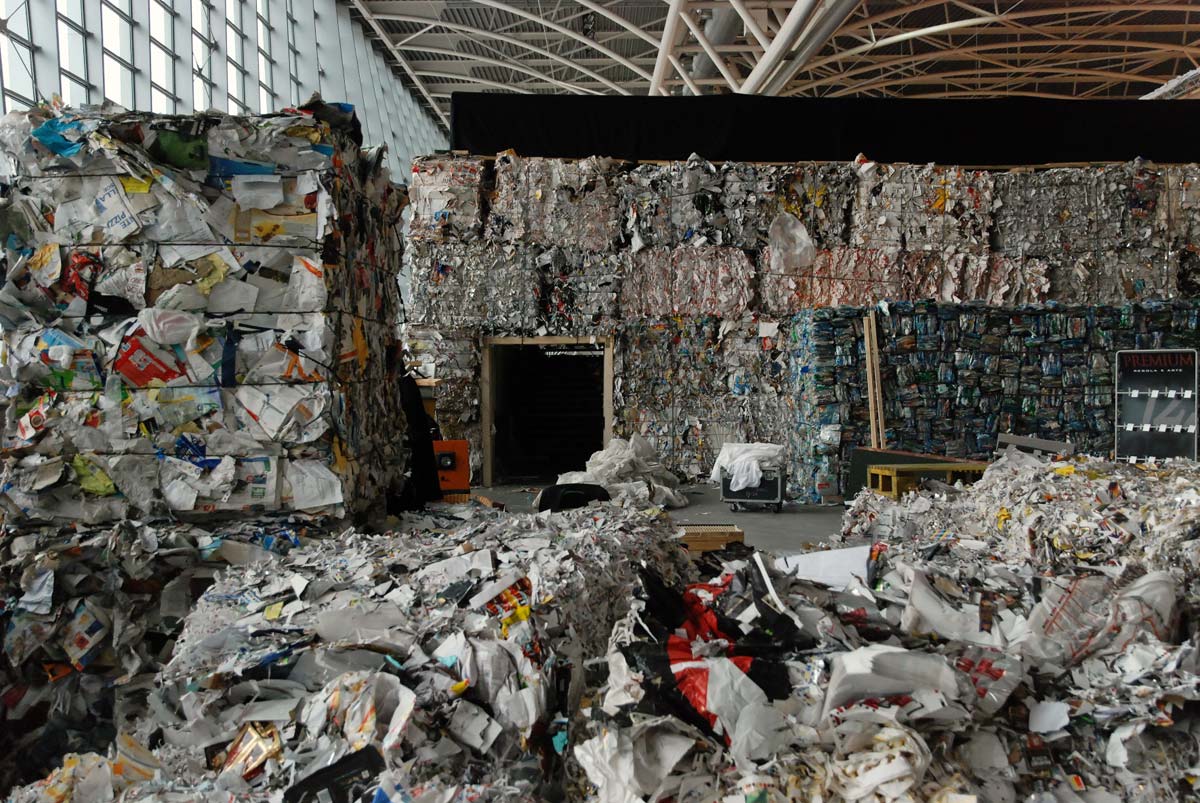 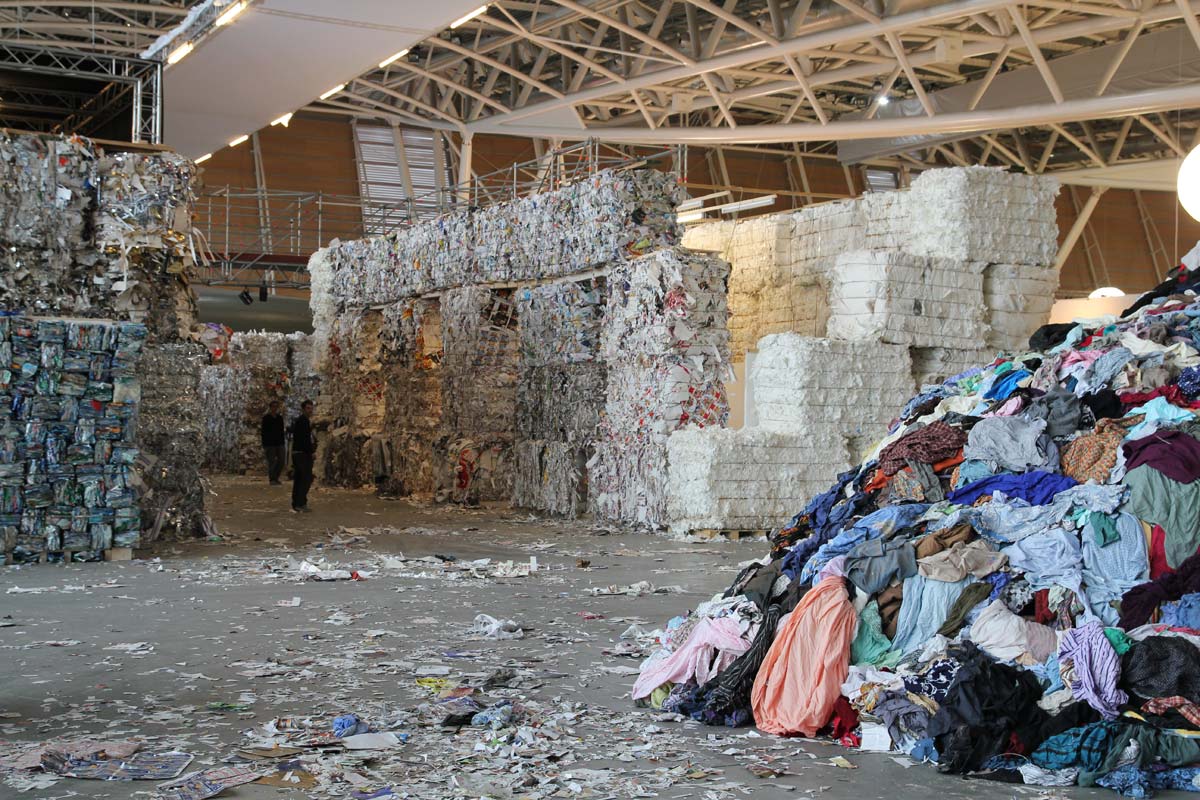 The House of Contamination’s walls are made from trash materials, intercepted in their route through the recycling process: crushed plastic bottles, compressed bales of advertising and packaging paper, discarded wood from doors and discarded panels, compressed plastic car parts and bales of remanufactured cashmere. This last material is gained from used garments that are shredded, bleached and respun. 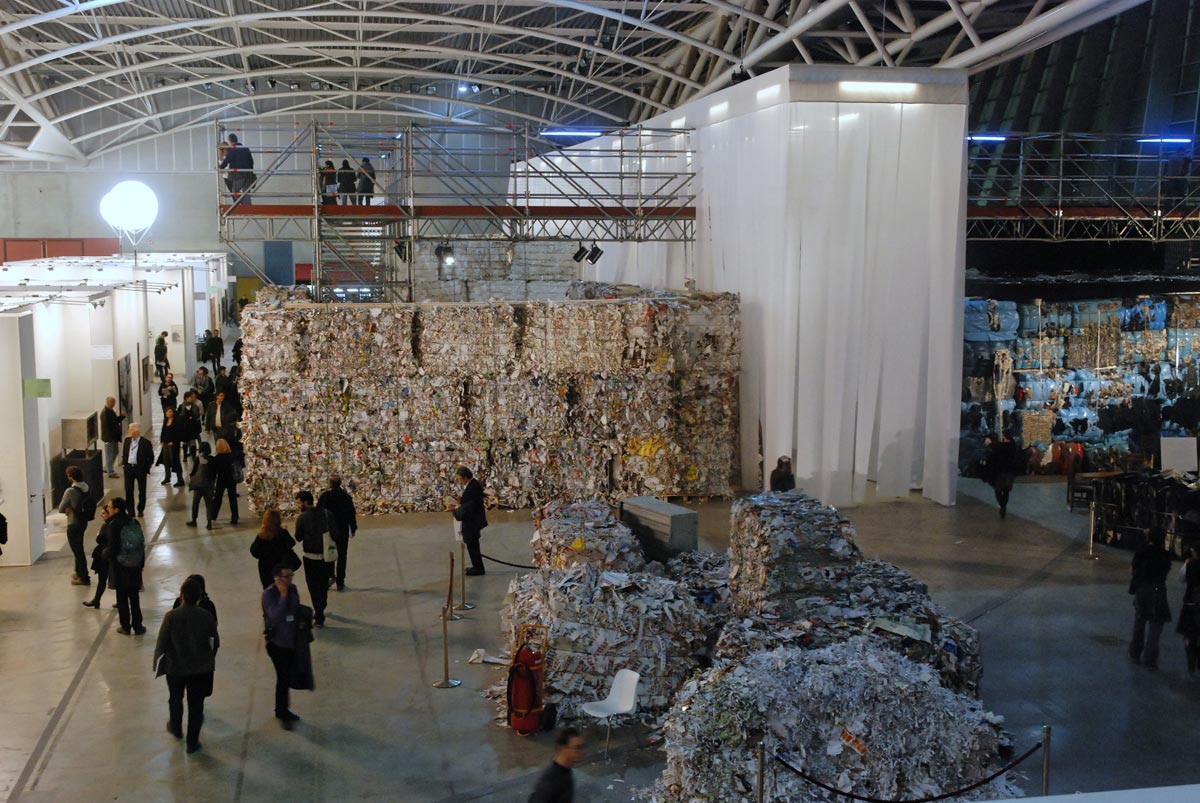 The furniture is designed and produced from old fridges, washing machines, doors, dressers, bookshelves and chairs designated for the dump. A garage is fitted with an enormous fan to distribute wind through the art fair space; its form is covered in used clothing, recuperated from the leftover materials after an exhibition by Christian Boltanksi, 1:1 recycled art. 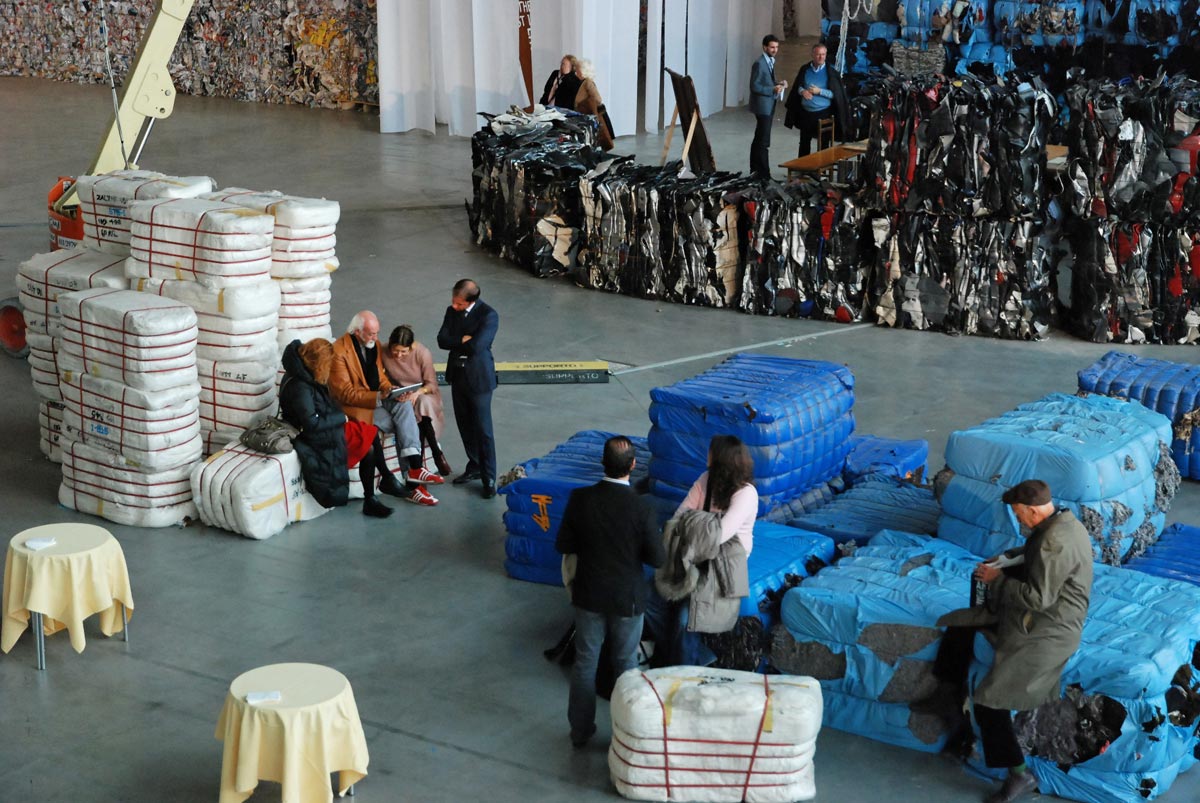 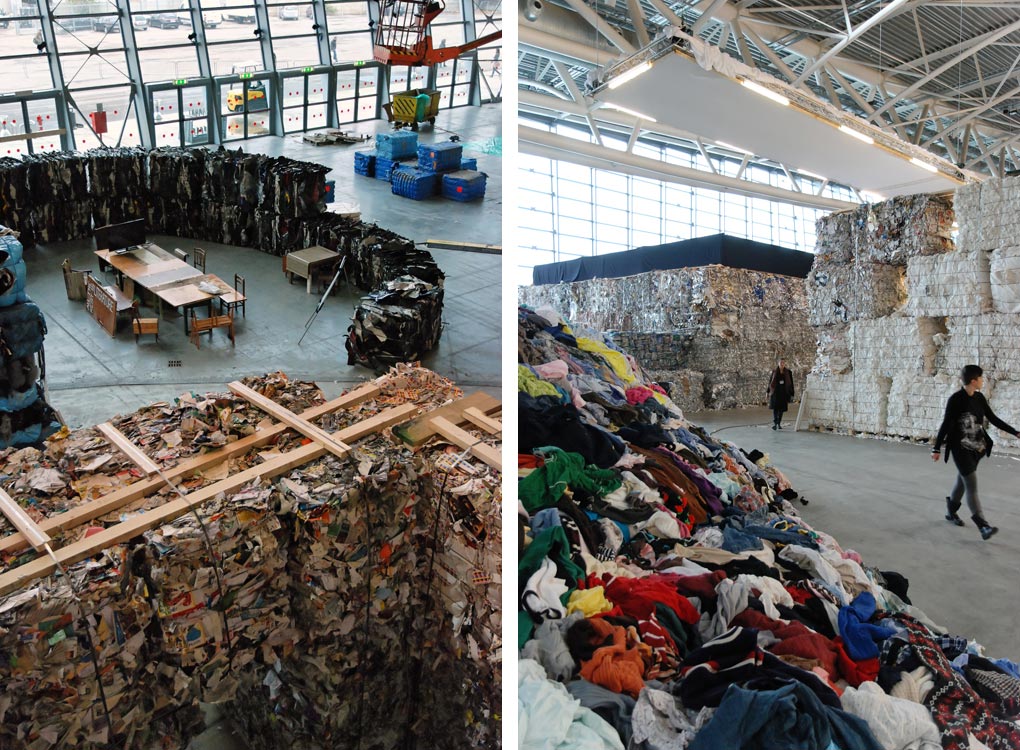 Most architectural elements of the space are fixed and solid, but the design incorporates a sliding wall, referencing high-tech philosophies of an adaptable architecture. The wall can slide, taking away the cinema screen and shifting the eye to the theatre stage, sealing the literary salon or invading the corridor. Two other elements – the skywalk and the tall curtain corridor – represent the most radical dichotomies of design. 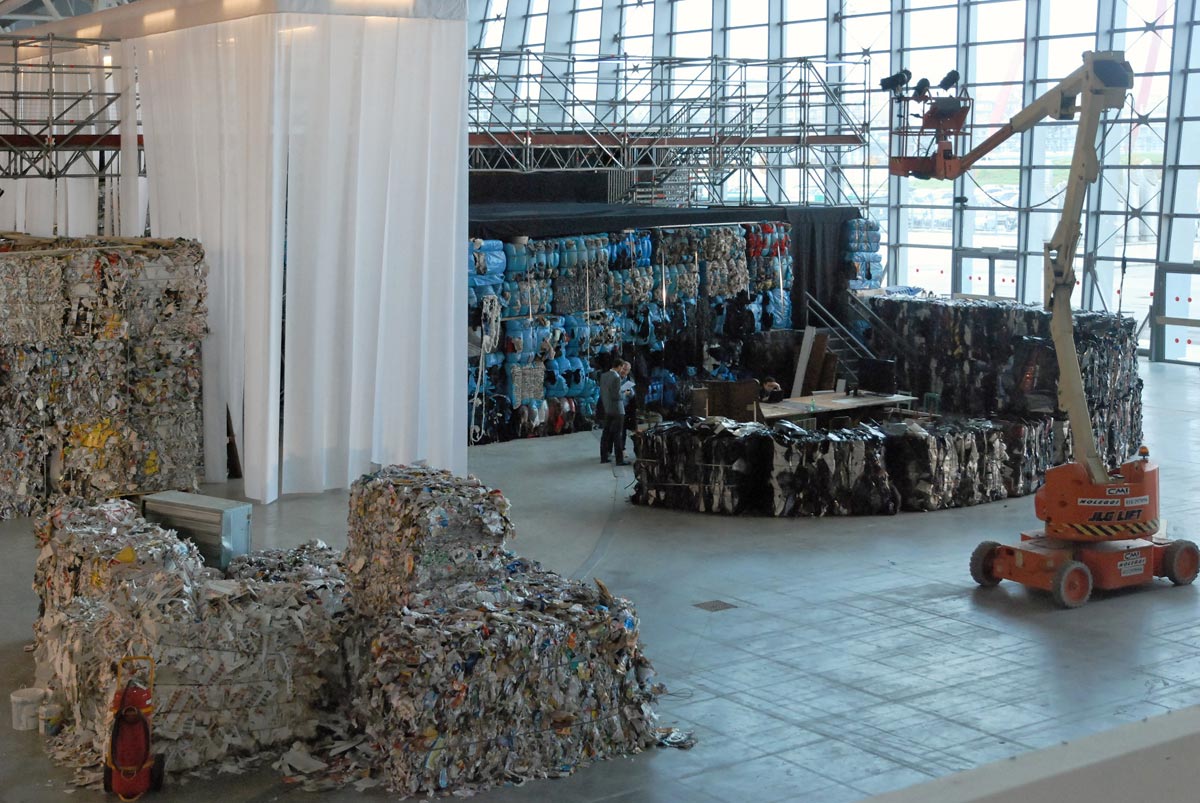 The skywalk talks about a powerful view. It is the space of control and observation. As an alternate walkway to the entire space, its use is totally at the disposition of the individual user. An uncomfortable atmosphere of power, authority and hierarchy comes into play. On the other hand, while using the walkway to gain the raised viewpoint, its users become part of the visual focus of the installation inside the fair hall. They become subjects of control and objects of view at the same time. The opposite is the case in the curtain corridor: a long corridor that cuts the space in half, invaded by residues of silver-plated paper, while its fabric walls are moved by crosswinds. This central piece of the installation is the magic mixer, the prominent but unexpected space of indeterminacy. Its surface is created in a way that the users can move through its surface at any point and at their will.

The interior programmes of the House of Contamination permeate each other by acoustic and visual interference and/or pollution, depending on interpretation. An extra layer of permeation exists in the relationship between the House of Contamination and the space of the art fair, with emissions between both creating a prominent sense of interdependency. In between the programmed spaces, the design incorporates spaces with uncertain uses, spaces that are more a question than an answer to any kind of need or desire. 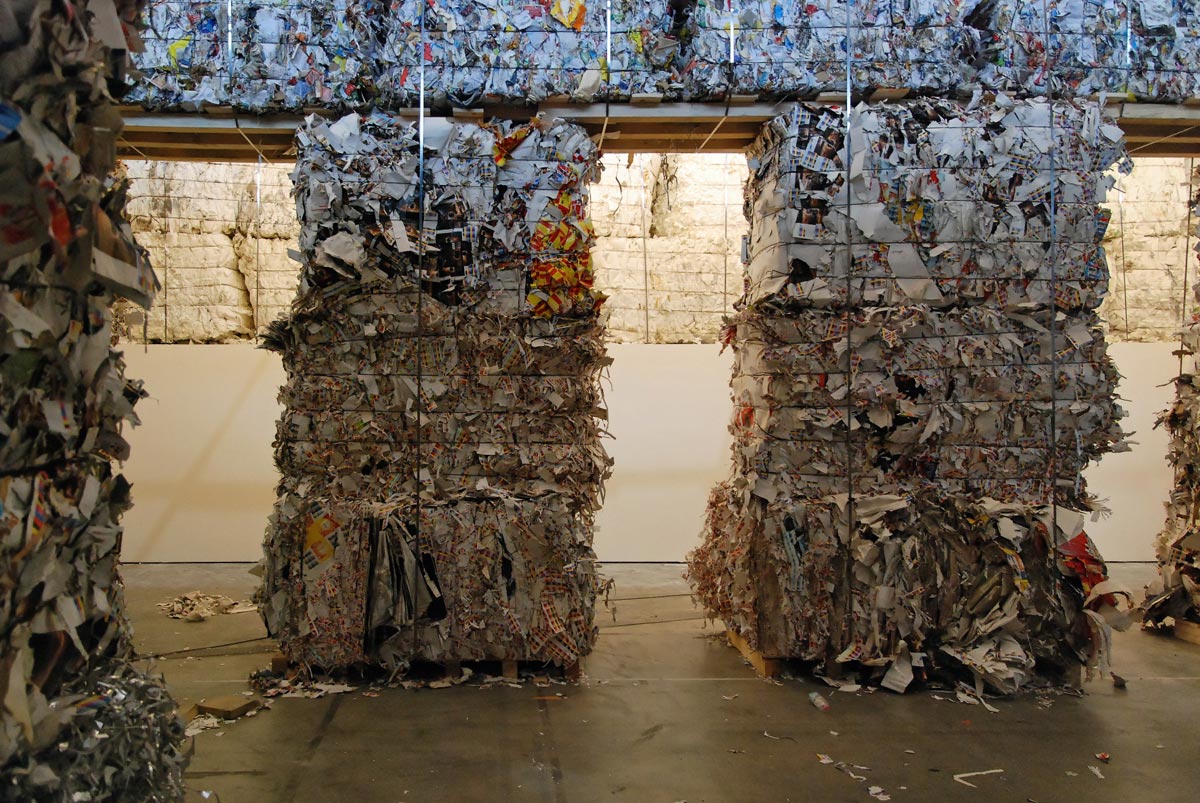 Visible in the design and use of the House of Contamination are the potentials of collective space, the unclaimed and unintended. When materials, people and programs collide, interesting moments of ambiguity and tension lead to negotiations regarding needs, desires and purposes – hopefully allowing for new forms of collaboration to develop. We consider this negotiation process an essential part of the production of public space. New forms of collaboration spark the hope for a different and better world, for a human overcoming of Endzeit scenarios.