Danish architecture studio CEBRA has completed an adult education centre in the heart of the city of Odense, Denmark. Located next to the central station, the HF & VUC Fyn complex marks an important step towards the realisation of a new city campus that ties the inner city and the harbour together. By combining elements from its coarse industrial neighbours with an embracing and transparent interior organisation, the HF & VUC Fyn aims to create a bridge between the scale of the harbour and urban life. The building’s robust and unassuming exterior is contrasted by an inner spatial diversity of rounded forms that create a varied learning environment for 1,300 students – an inspiring and vivid school that continuously suggests new ways of use and makes room for individual learning needs in a collective building. 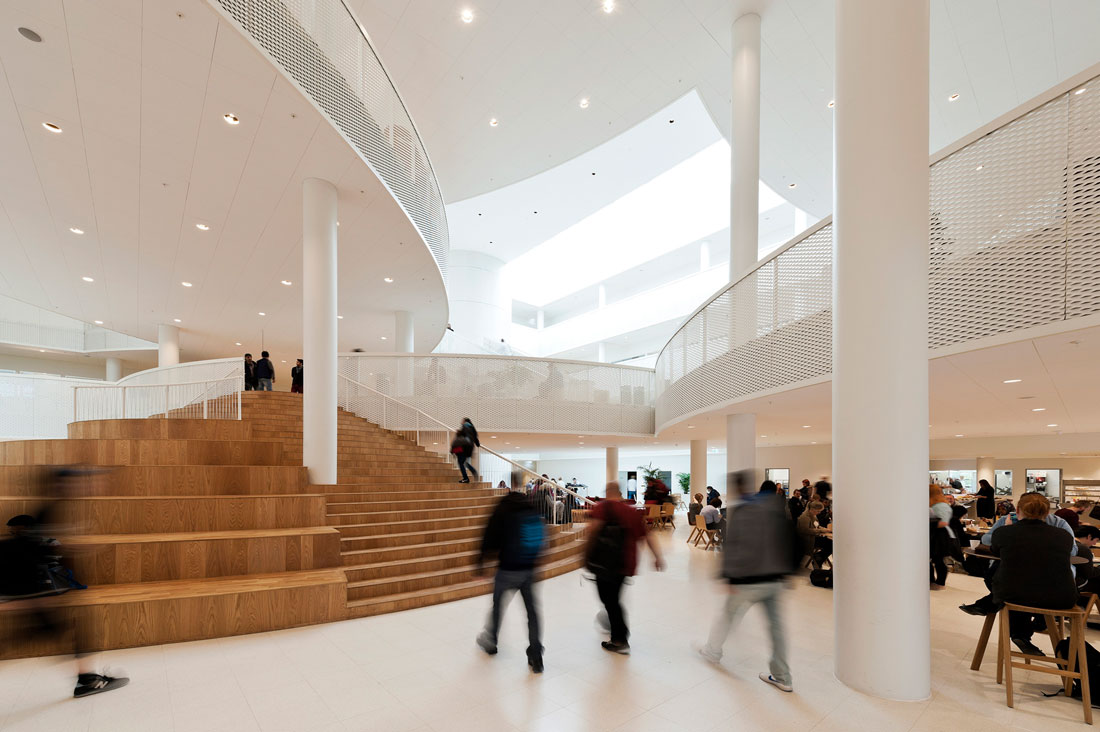 The school adapts to the students

“The basic idea was to design a school that doesn’t look like a school. The general conception of a completed educational degree as a security to fall back on is subjected to a fundamental review. We have realized that we must learn constantly in order to adapt to an ever-changing reality. An adult education centre like HF & VUC Fyn will play an essential role in maintaining a society’s competences in the future,” explains architect and co-founding partner Carsten Primdahl. “Therefore, it is essential that it be built on lasting values that revolve around the individual. The building has to adapt to the student and not the other way around. That is why the project focuses on creating a building with specialized, yet diverse environments, where students can find spaces and settings that match their own preferred learning style” 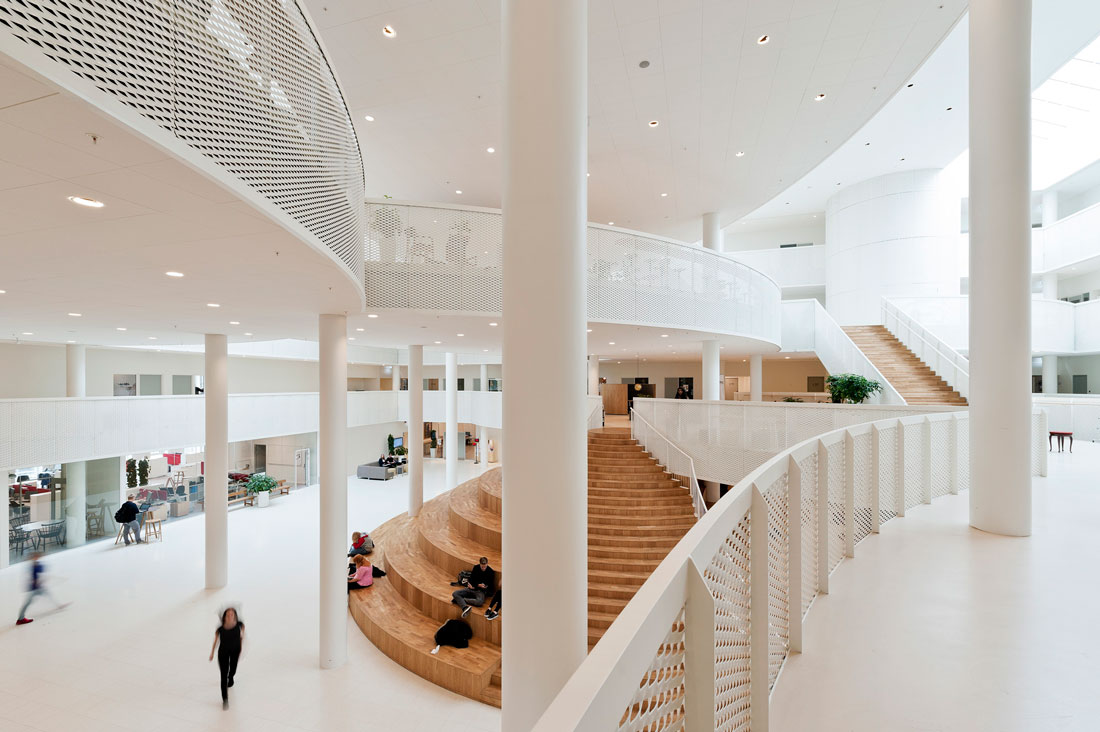 Therefore, the design is based on the aspiration to create a versatile framework for a learning culture, in which lifelong learning and education form an inherent part of the adult individual’s personal growth in pace with society’s development. The building is characterized by a system of curved lines and rounded forms, which cut through the rational volume’s regular form and create a multifaceted spatial setting that takes into account the school’s different functions: an arena for teaching and learning, a workplace and a social meeting place for a diverse group of users. 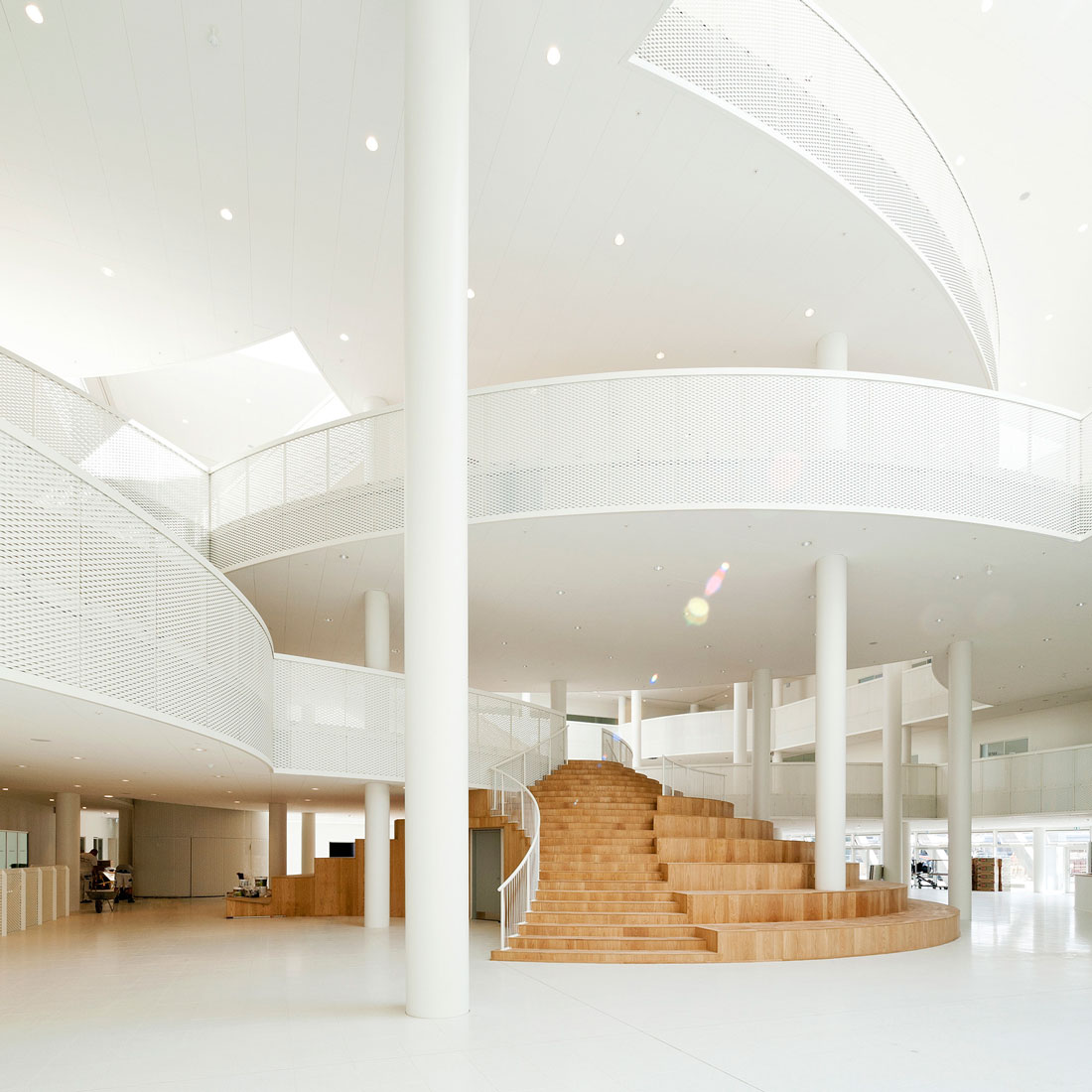 The building is organized around a transparent and very active atrium space, called the Agora and named after the public gathering place in ancient Greek cities that constituted the centre of political, spiritual, and artistic life in the city state. This central space not only functions as a forum for social activities but also as an essential learning environment in connection and interplay with the classrooms and the school’s additional functions. The rounded shapes form a series of balconies and platforms with shifting overlaps across the atrium in order to create single, double and triple-height spaces with varying degrees of daylight, transparency, and intimacy. 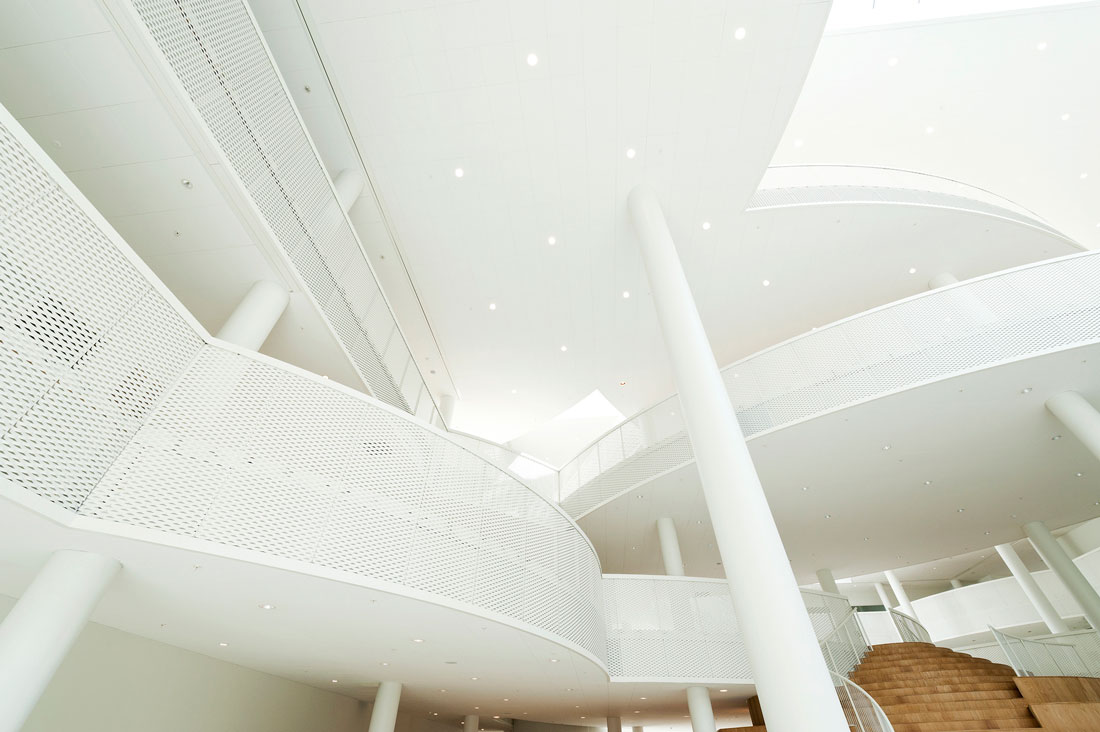 The levels of activity decrease gradually from the Agora and outwards, with the most calm and private spaces located along the building’s outer edges. At the same time, this organizational principle is transferred from plan to section with the highest levels of activity and transparency at ground level and spaces for contemplation on the top floor. The functions on the different floors are organised in such a way that the relations between classrooms and special rooms allow for cross-disciplinary and project-oriented lesson plans. Students can thus choose to use the spaces and environments which match their individual learning styles. 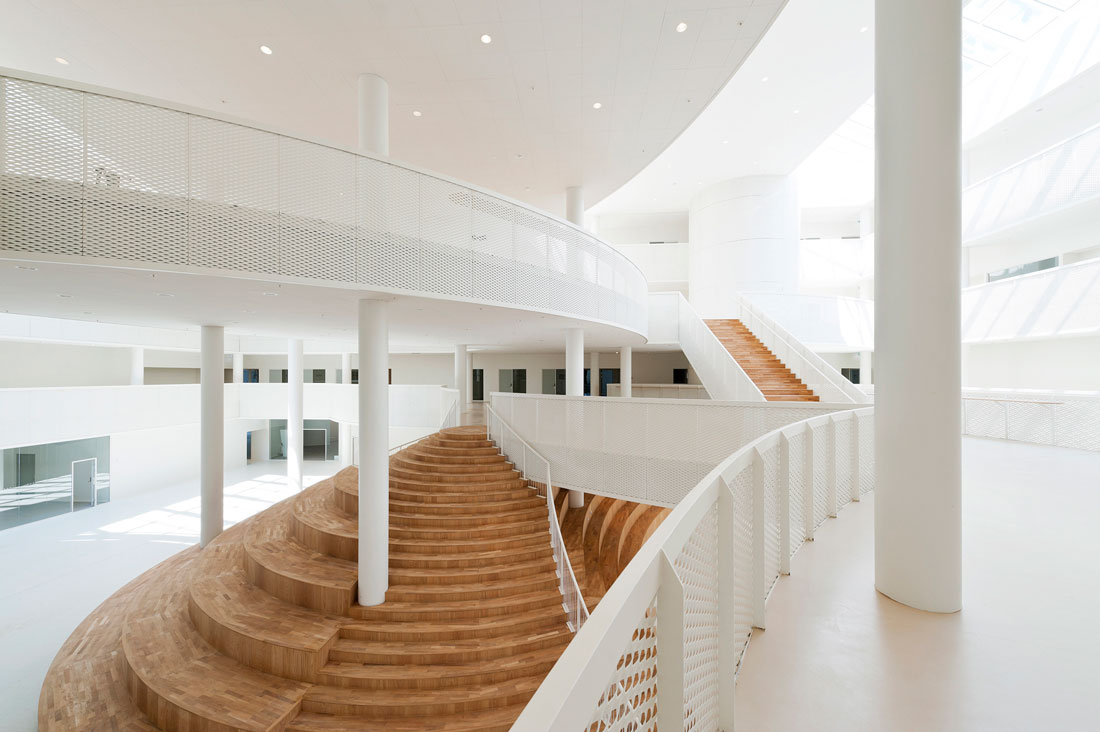 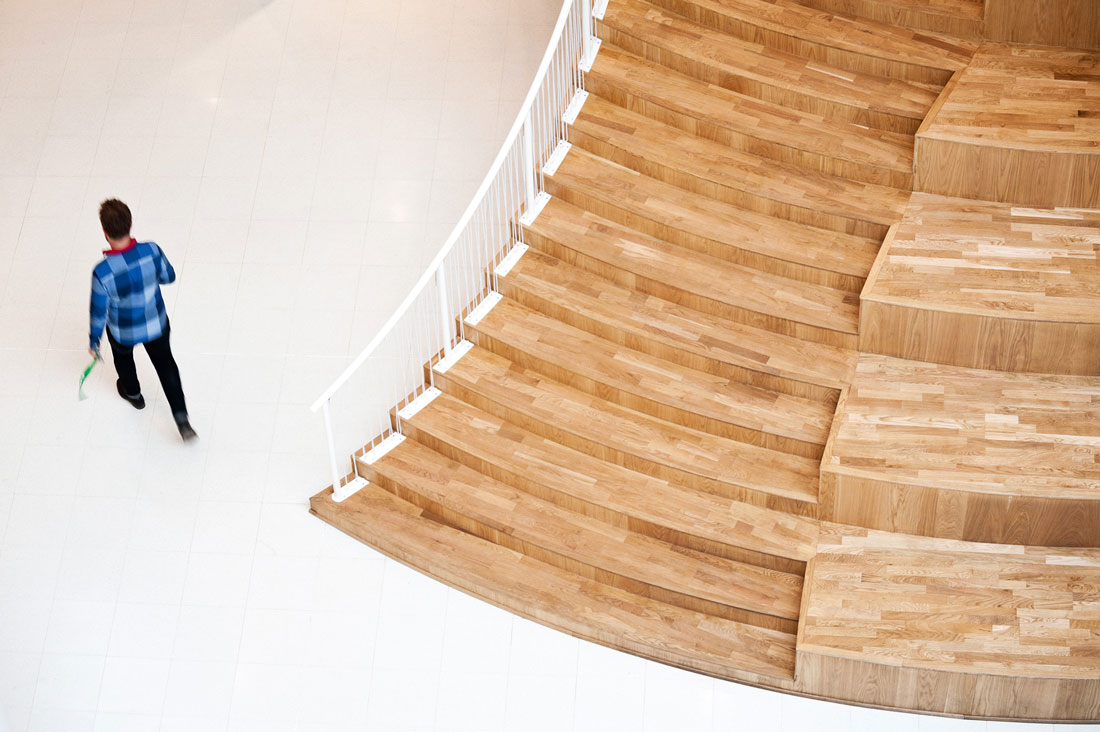 The building and the city

A series of curved incisions into the building continue the formal language of the interior and let the building interact with the surrounding city. Around the main entrance and the ground floor café they create a roofed outdoor space, while they make room for terraces on the upper floors. On the one hand, the terraces provide views over the city, lounge areas and outdoor study zones. On the other hand, the incisions reduce the scale of the large building volume and accentuate specific functions.

The façade uses a pattern of aluminium cover plates and expanded aluminium mesh to relate the exterior to its surroundings and the industrial structures of the nearby harbour. At the same time, the combination of solid plates and porous mesh contributes to a varied expression that changes over the course of the day and depending on sunlight and weather conditions. In addition, selected mesh sections are backlit with LED lights in order to accentuate the building at night. 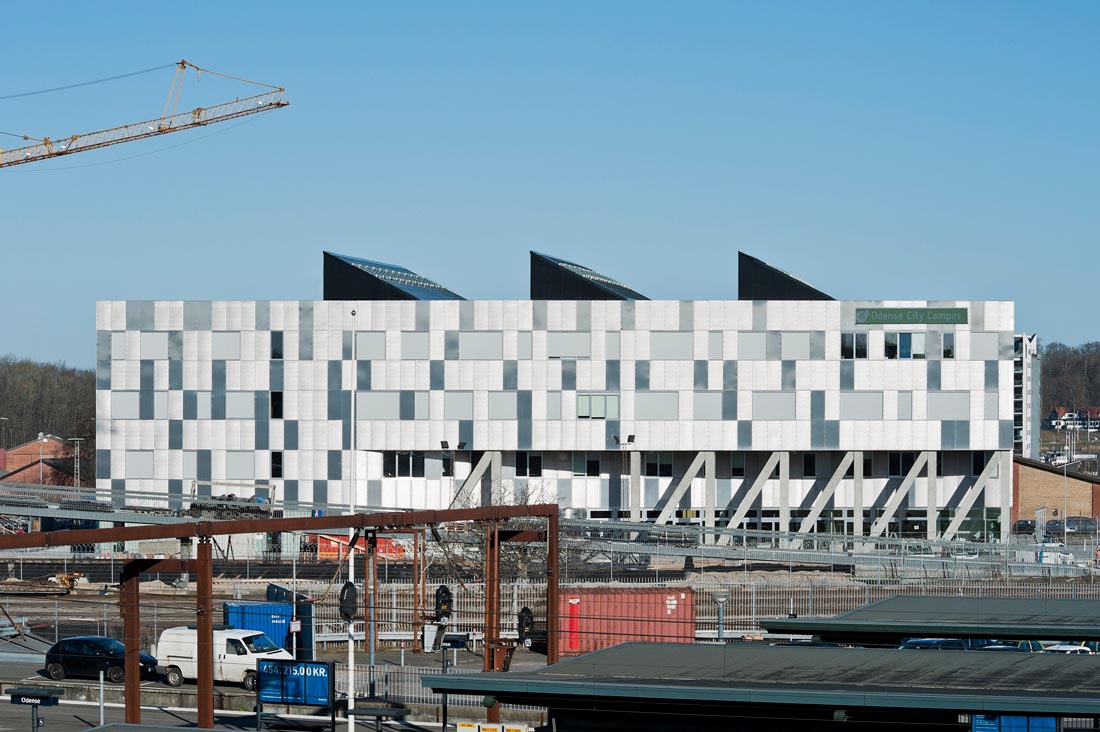 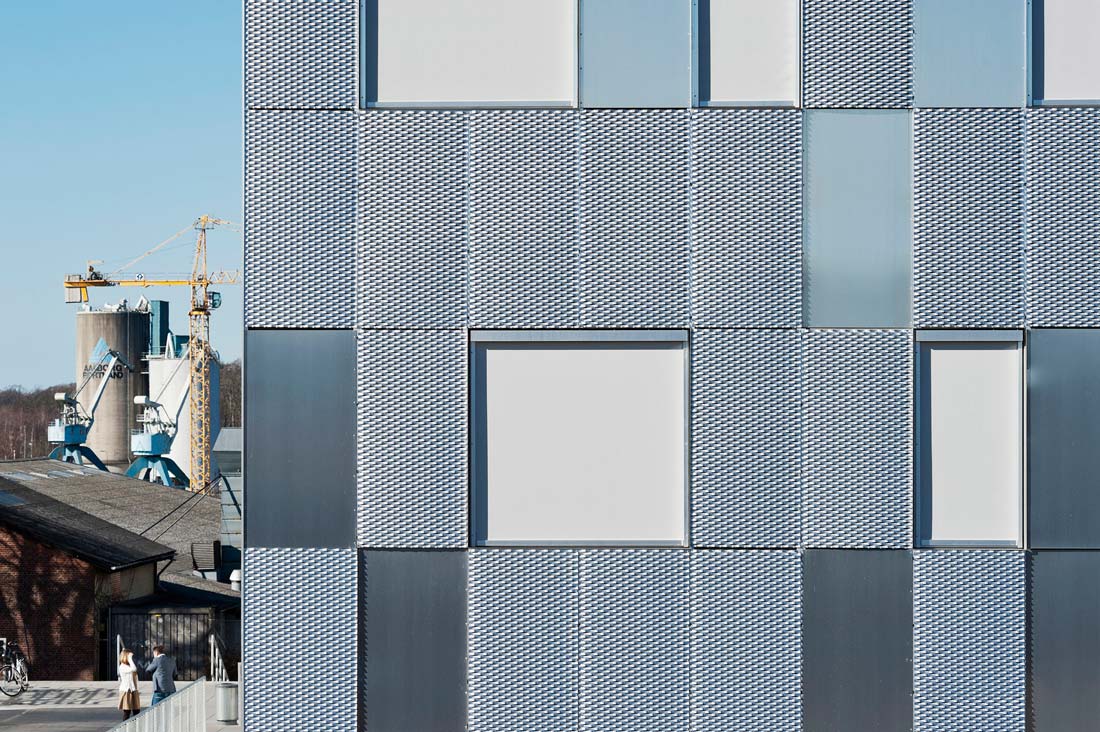 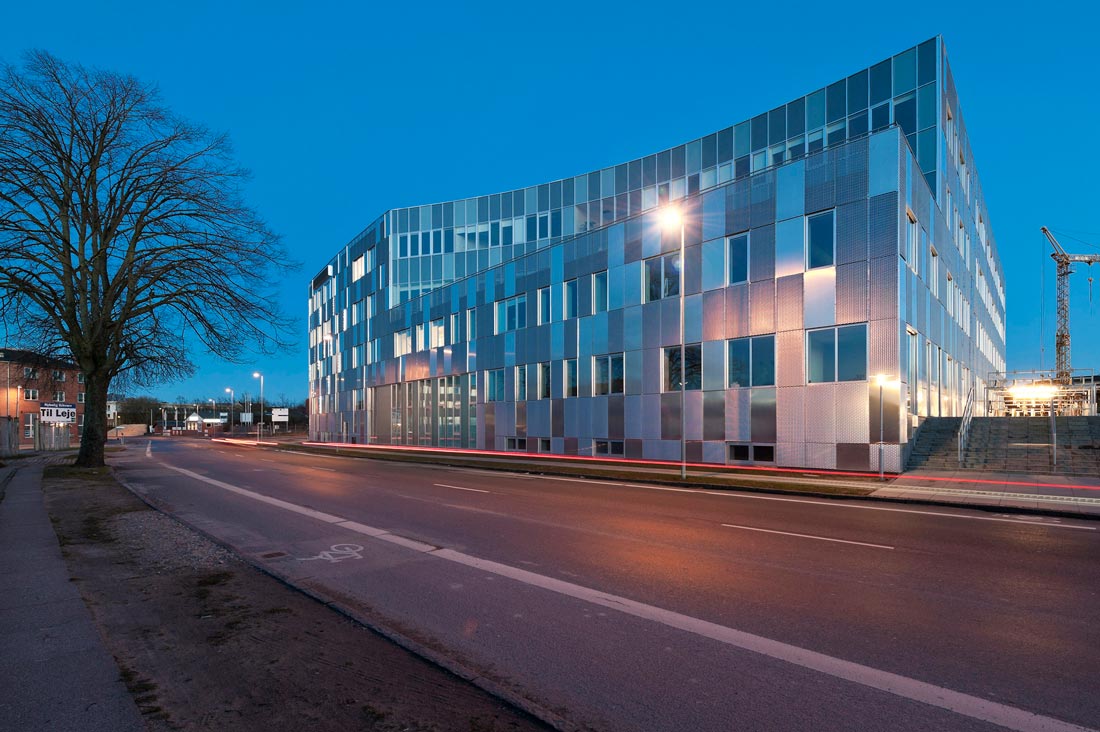