The Haute Deûle River Banks development project leans on the recognition of the site qualities that form its basis and its enrichment.

The water presence is undeniable, as much in the district history as in its present-day configuration, despite its past loss of recognition.

This project for a sustainable district takes place in the surroundings of the old textile mill, nowadays transformed into a consortium of high technologies of communication. It leans on the memory traces in order to mimic these inhabited places identity and, at the same time, to revitalize the expression of ‘federated water’ in this new development.

The project restates the strength of the Haute Deûle canal, taking up the canals and irrigation ditches old lines, and taking further the principle of rainwater collection from the whole district surfaces. The water station square offers a convivial space over the traces of the old inland water shipping trails that forged the identity of the Bois Blanc district.

The water garden, that plays the role of storage and phytoremediator, evolves with rain rhythms and becomes an emblematic place for this project on water. 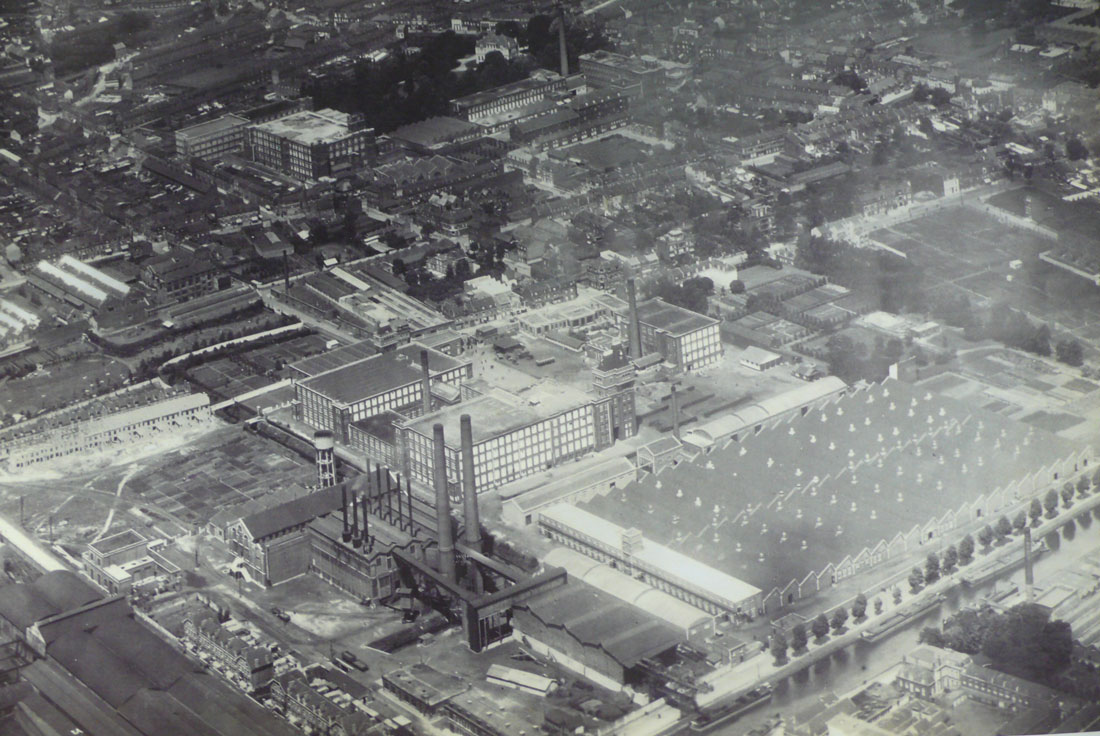 The old textile mill, Le Blan-Lafont (now “Euratechnologies” building), constitutes undeniably the focal point of the scheme due to its dimension, its place in the quarter, and its conjuring of a prosperous industrial past. It brings this built ensemble together with the public spaces that surround it: the large lawn and the water garden in the south, the old dance hall and Bretagne square in the north. Interaction and complementarity are generated between the building devoted to high-tech companies and the public spaces, open to a broader public. 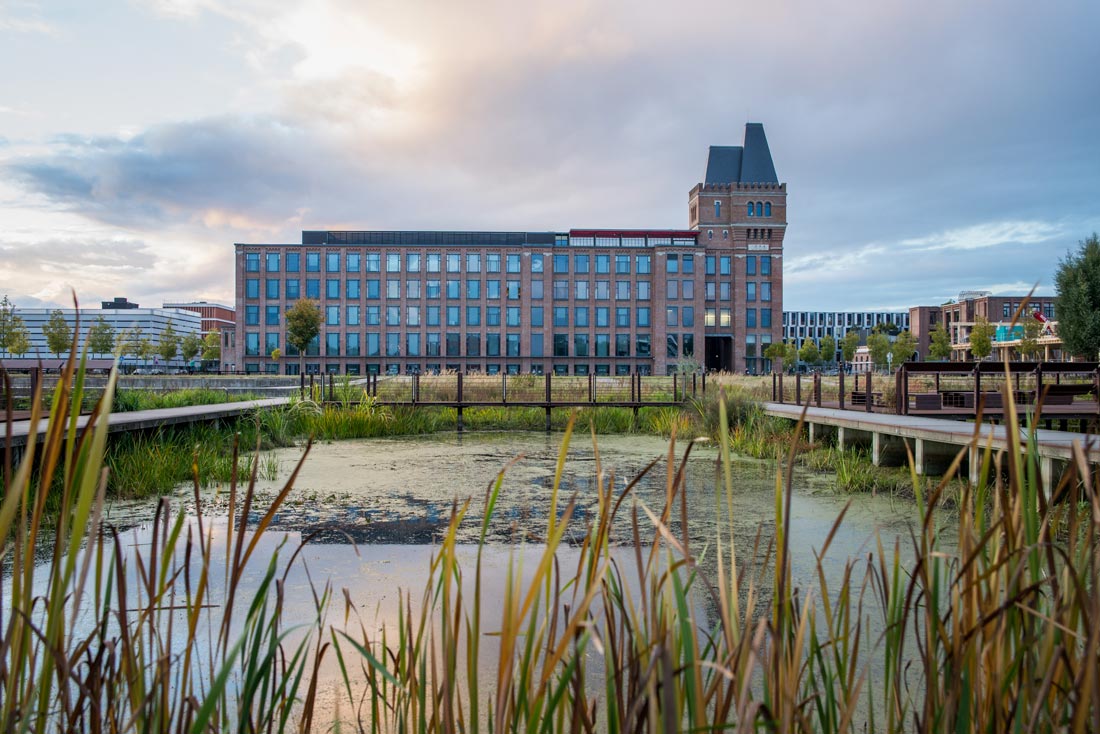 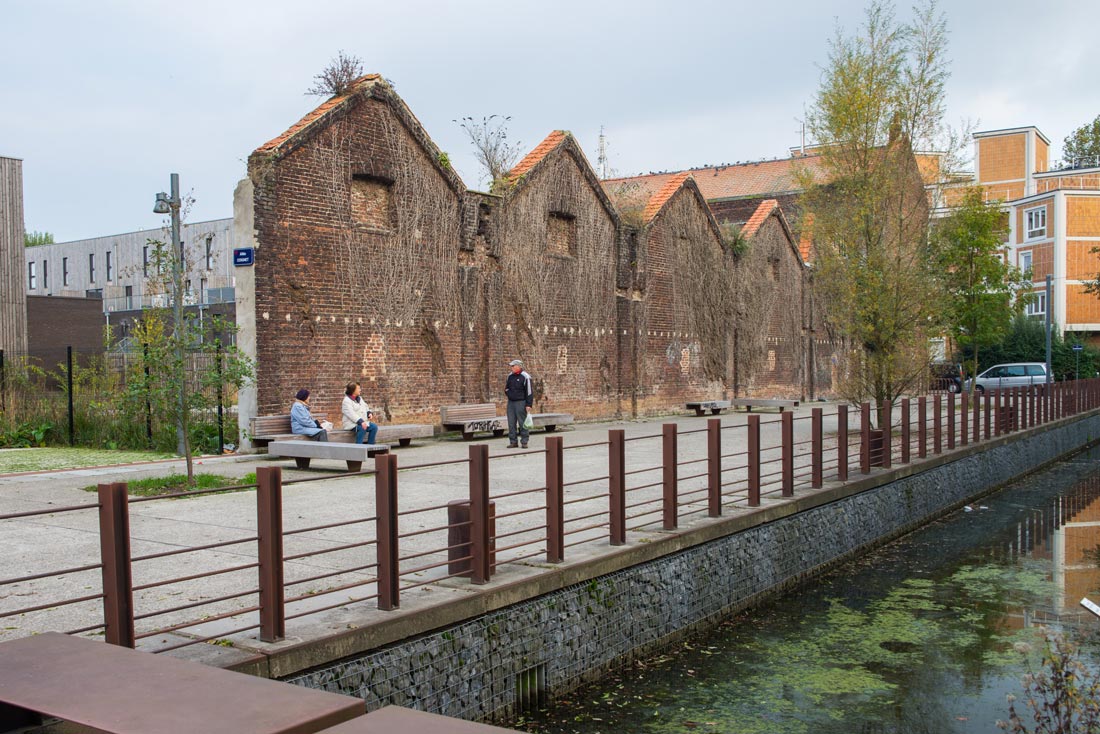 Along the large lawn and the water garden, directed towards the Haute Deûle canal, the north-south circulation axis simultaneously represents one means of expressing water in the district, an essential route into Euratechnologies heart, and a link towards Lille and Lomme neighbourhoods. 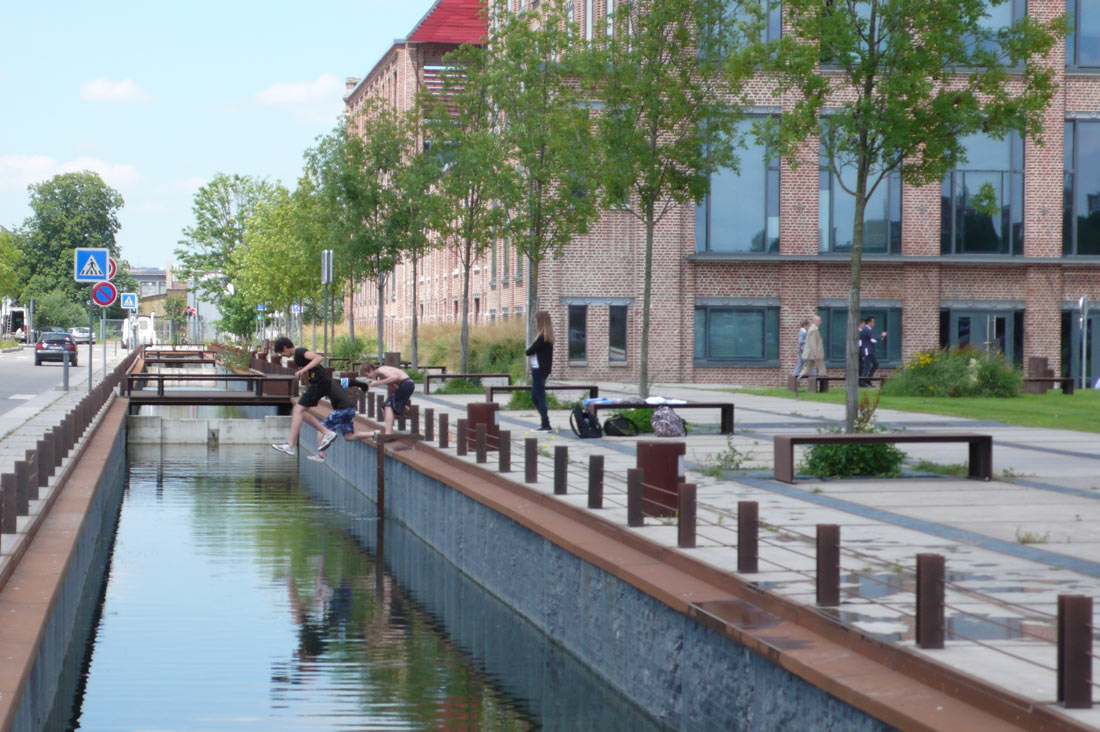 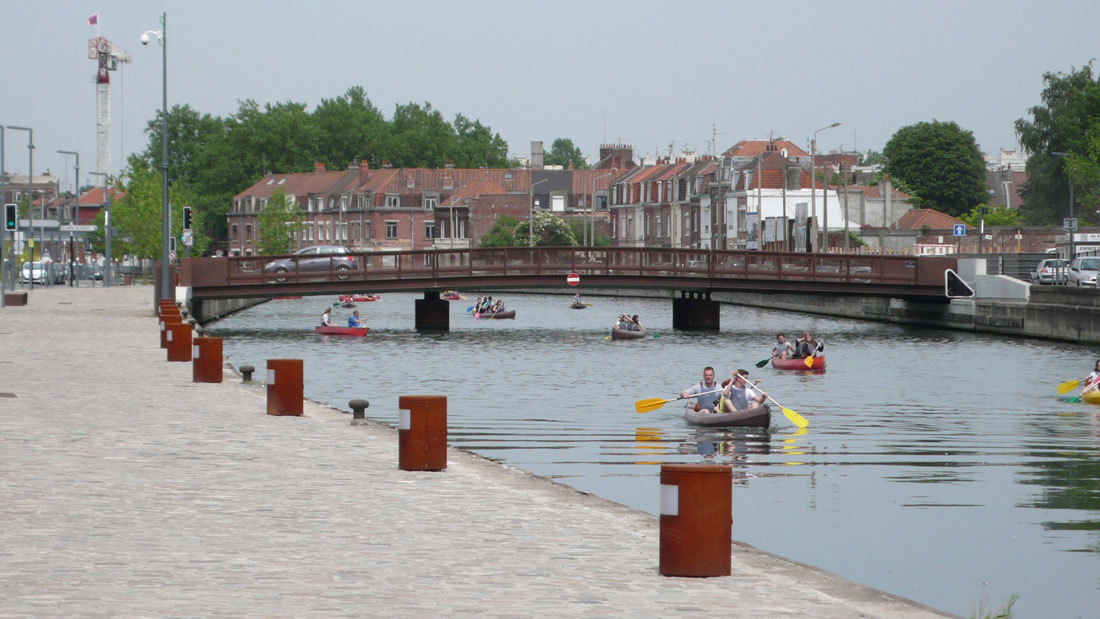 The new lift bridge crosses the Bras de Canteleu to ensure the link with the island of Bois Blanc and to allow the waterway to rediscover the central role it plays in the district organization. The new Pont à Fourchon street fits in with the urban history and respects the strip parcelling and the existing walls. 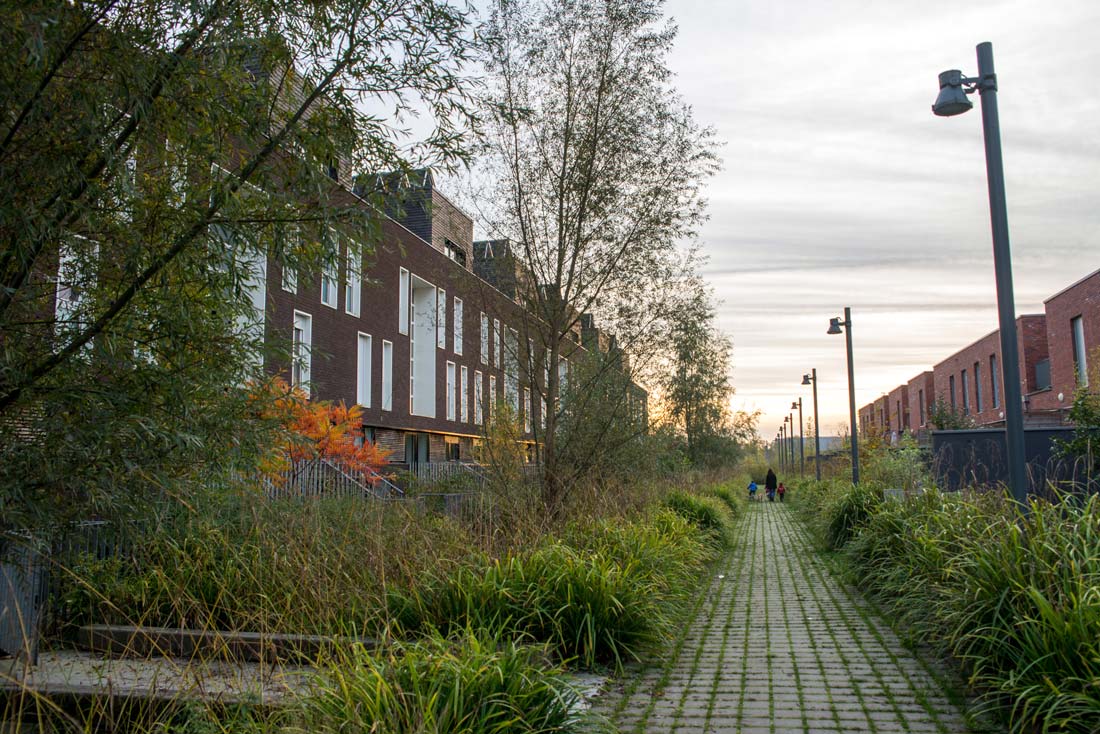 The river banks development offers an extraordinary opportunity for the requalification of public spaces of the Lomme Marsh and manages to allow a new service quality; however, it does so without depriving this quarter of the charm that resides in the proportions of the streets bordered with workers’ houses. This garden street expresses the territorial dimension of the valley of Deûle and offers a linear park typology to serve the district heart while respecting its working-class built typology. 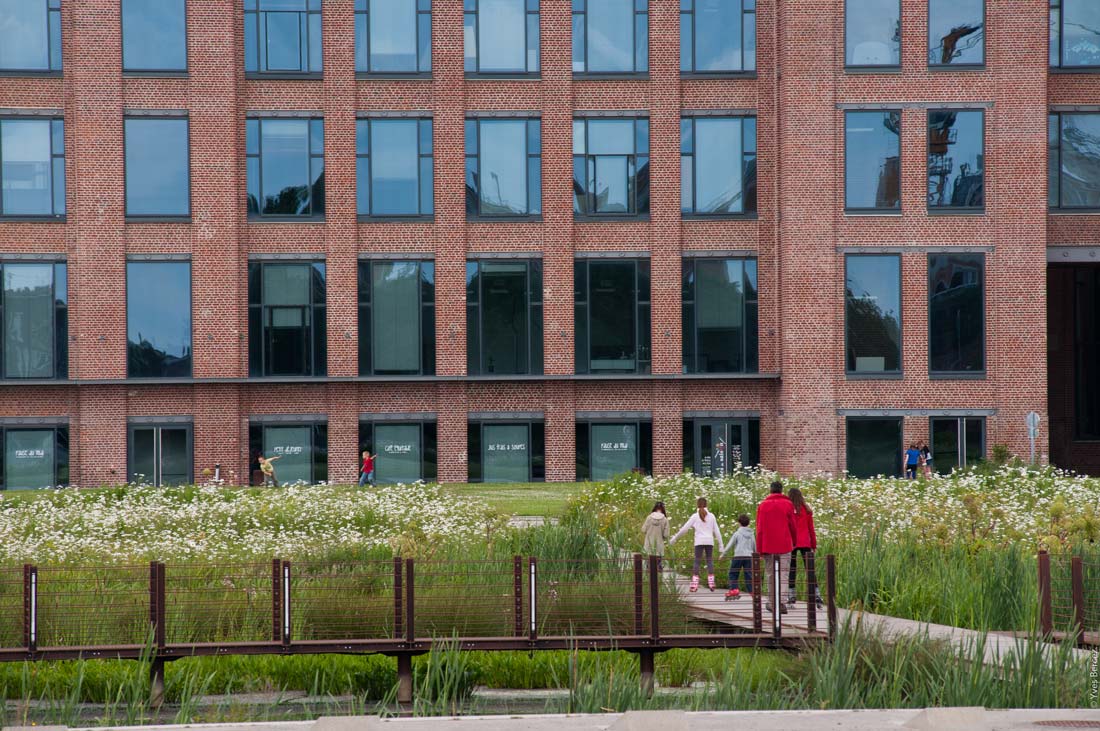 In 2009 this project was awarded with the Ecological District Label on the theme of ‘Water’. It also won the French 2010 Prize for Urban Development.