The project to expand and rehabilitate the Gon-Gar Workshops involves the reorganization of an organically growing industrial cluster consisting of two industrial buildings and the owners’ home, which make up this agricultural machinery repair company. The complex has been located for almost 50 years in the centre of the compact urban area of Benissanet, a small, essentially rural and agricultural town of barely 1,200 inhabitants, located on the right bank of the lower Ebre River.

The project consists of the conversion of an abandoned pre-existing warehouse into an office building (Building B2) and the construction of a new open-plan industrial building attached to the former, which will be used as a mechanical workshop and exhibition area (Building B3). The relocation of the offices in the centre of the cluster and the construction of the new workshop has made it possible to multiply the internal connectivity of the complex and improve the quality of the working life of its workers, increasing the surface area by 938 m², creating a total of 2,610 m².

In town planning terms, the recovery of the pre-existing warehouse and the construction of the new industrial workshop blend the complex into the surroundings, consisting mainly of three-storey terraced houses with gable roofs, constructed rhythmically every 5 m. The project gives form to the new urban front of the cluster, with the definition of a new corner façade perimeter facing south and east that responds to the needs and characteristics of its interior space and, at the same time, to its integration and adaptation to the urban landscape. 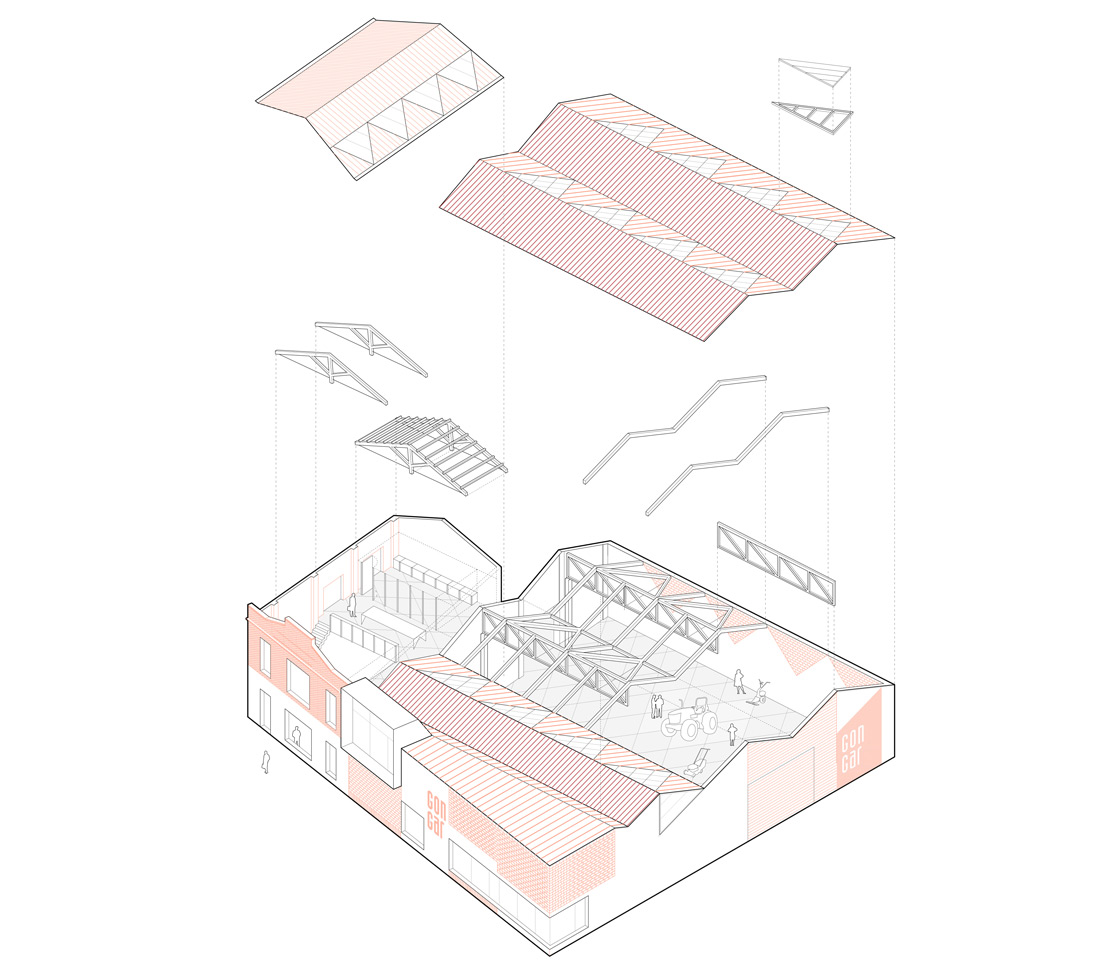 The project is thus conceived as a double intervention with very different characteristics.

The transformation of the old warehouse is implemented through various specific actions that interrelate with the pre-existing features, such as the formation of a new double space, the opening of new windows and new skylights to improve the lighting and spatial conditions of the building, and the construction of lightweight wooden structures to define private offices and furniture: emptying, trimming and inserting while trying to preserve the essence of the original construction.

On the other hand, the new workshop is conceived as a newly constructed 625 m² open-plan building adapted to the limits of its trapezoidal plot by means of a lightweight steel structure supported by perimeter pillars. The structural framework that supports the roof incorporates a series of north-facing triangular skylights to illuminate the interior space in a natural way. The feeling of lightness of the interior space of the building contrasts with a more emphatic and contextualized exterior intended to blend with the surroundings.

Despite being two very different pieces, each with its own character, one of the keys of the project has been the search for continuity, dialogue and consistency between the two constructions and their relationship with the pre-existing elements and the urban landscape. 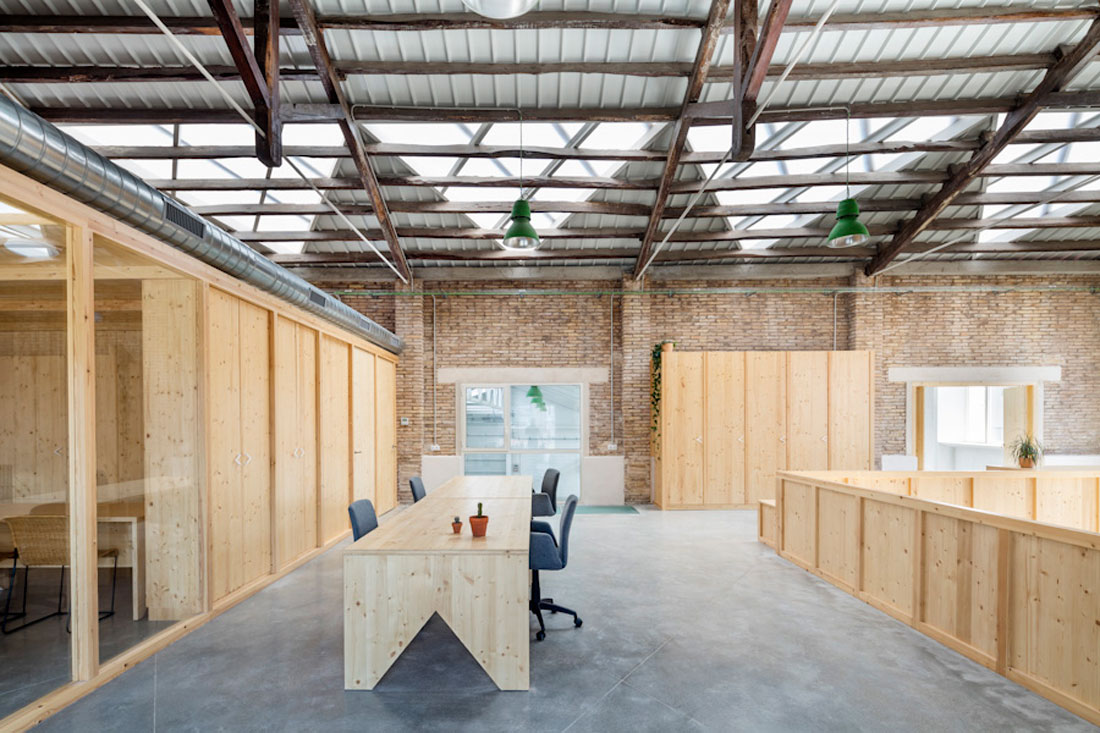 In the first place, the main structure of the new workshop has been designed following the main axes of the existing building structure. The preservation of the orientation and module of the structure of the old building orders and links the two buildings and at the same time allows the oblique side of the trapezium to be resolved in the same way, absorbing the geometric deformation in the structural section of the main façade.

Meanwhile, the two buildings are functionally connected inside on the ground floor through the opening of new connections in strategic places that allow the transit of machinery and products between the different buildings in the complex. At the same time, at the first floor level, the new workshop incorporates an attic built with laminated wood that houses the company’s new meeting room. This room, which contrasts with the emptying of the double space of the existing building from where it is accessible on the first floor, merges the two buildings and is visible from the outside through a large window that illuminates one of the most representative spaces in the complex and is intended to link the two buildings volumetrically.

Finally, the reinterpretation of the traditional geometric and compositional rules of Benissanet’s residential urban fabric makes it possible to integrate and establish the necessary urban continuity between the new workshop, the existing warehouse and the surroundings. The dimensions of the structural bays, the rhythm of the slopes of the roof and the profile of the side façade, the size, location, and proportion of the gaps, and the textural treatment of the thermo-clay walls partially covered with mortar intend to modulate, defragment, and integrate the new volume of approximately 20 x 30m of façade into the existing urban morphology.