Geometric for the People: Collaborative Structures to Empower Communities

Geometric for the people is the name of one of Ctrl+Z’s research programs with more than 20 constructed prototypes. It includes small and big structures made of a wide variety of materials, but independently of those aspects, they all have the same importance. Each one of them represents a step to advance along a single path and to achieve the objectives that underlie all the proposed actions:

– To collaborate with a community that is already working on a territory, providing them with new facilities.
– To advance in the research of this kind of structure, experimenting with new models and learning by implementing them in real situations.
– To improve the knowledge transfer protocols by adapting them to a real a community.

The facilities may be temporally built for fairs or exposition to finance their construction. However, once they have been installed in the community the inverse path is not an option. In our philosophy, the flow of resources should be always toward the base, and the added value should remain in the neighborhood and in the communities that invested their time and labor in its creation.

Our objective is to contribute to enrich each community with whom we operate. Since those projects draw on the collective dreams and illusions of each community, and people invest large amounts of social energies and enthusiasm (resources that are difficult to regenerate) in carrying out the proposals and initiatives, taking away the result of all that investment would mean leaving it poorer than when we arrived. For this reason, we donate the produced facilities to the locals. For us, donating to the community means recognizing their importance within each initiative’s equation and balance, as only the community can fill those elements with life and give them meaning. Without them, everything could be reduced to just an aesthetic exercise. 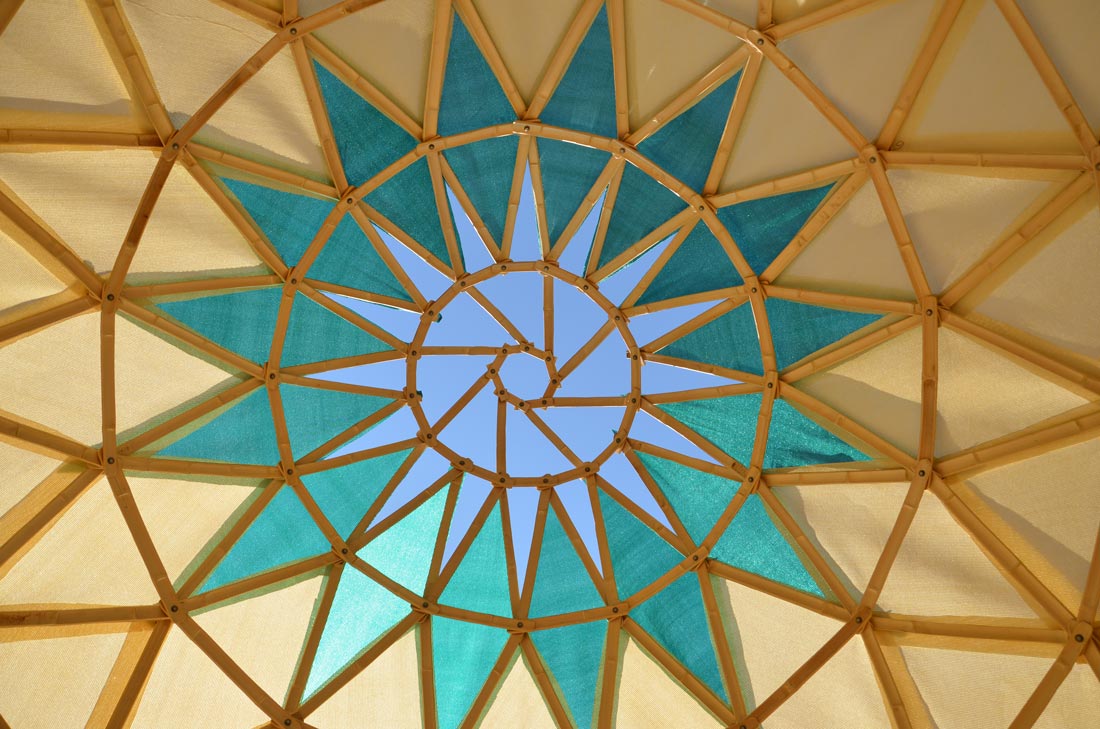 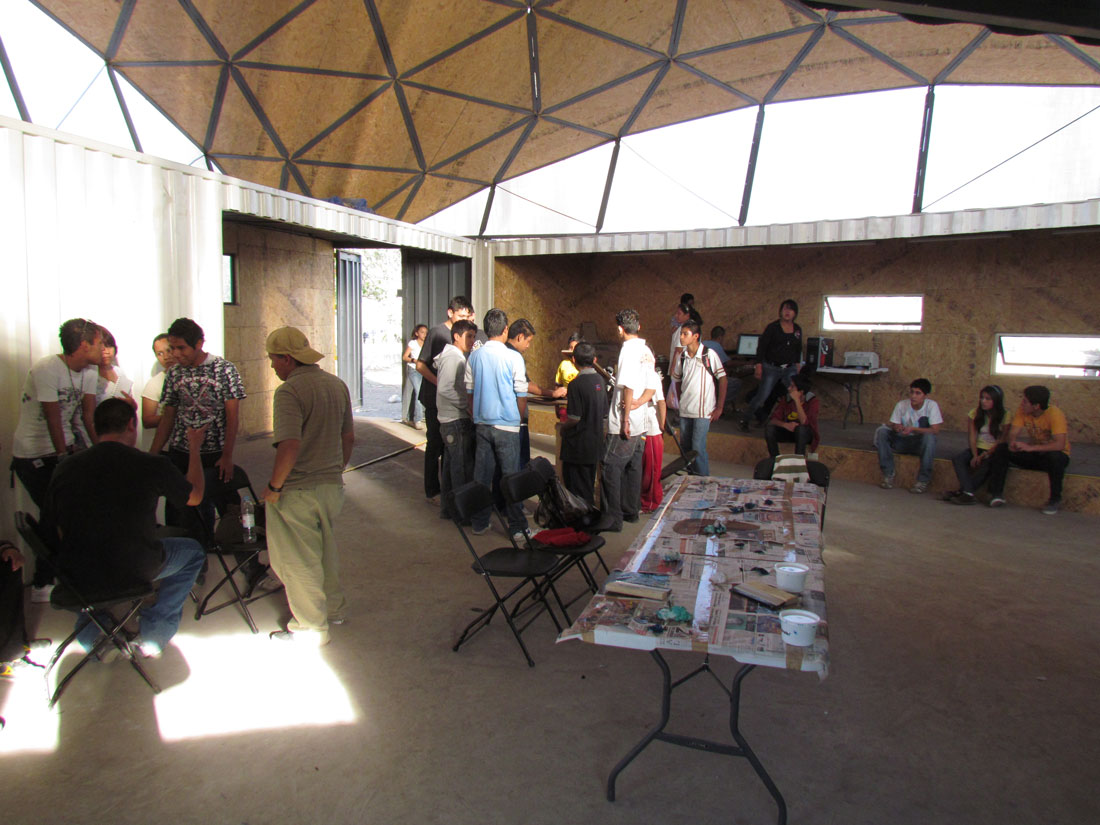 The techniques and materials used, as well as the actions carried out, might at first glance seem very mixed… They may seem to have nothing in common. But despite their apparent differences, they actually follow the same patterns and allow for the same approach and philosophy.

Each one incorporates the use of inclusive building systems and the participation of the community as a whole. To make that possible, all the building process are designed to be very simple and not to require excessive physical strength.

The entire process of construction is designed to be carried out with very simple operations, so anyone who would like to participate can do so, since learning takes only a few minutes. This was the philosophy of the overall project; our goal was for everyone to be able to participate.

We consider the residents as fundamental and essential collaborators. They are the only ones capable of providing the proposals with broader dimensions and the resilience necessary to give them continuity once the building phase is over and our presence concludes.

When Marcello’s parents gave us the happy news of the arrival of a new family member, a good group of friends gathered to help them expand the house with a new kitchen / living room to make more space for the children.

For this purpose, Ctrl+Z dusted off an old idea and ultimately developed the Brujodesic System to build geodesic domes, adapting it to the available materials and tools, with the intention of building the new rooms as a group with non-specialist friends during a festive week.

The final design is charming, and it could not be otherwise, sine all the people and actions were fueled by love and friendship. 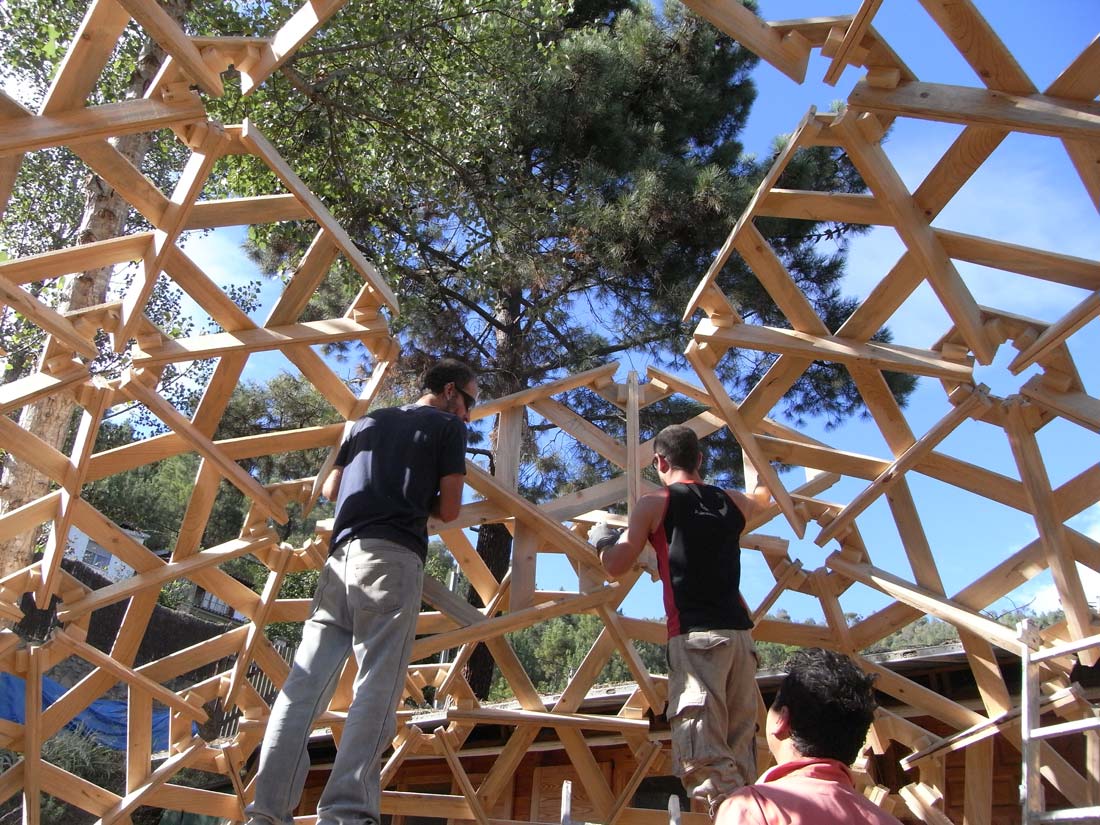 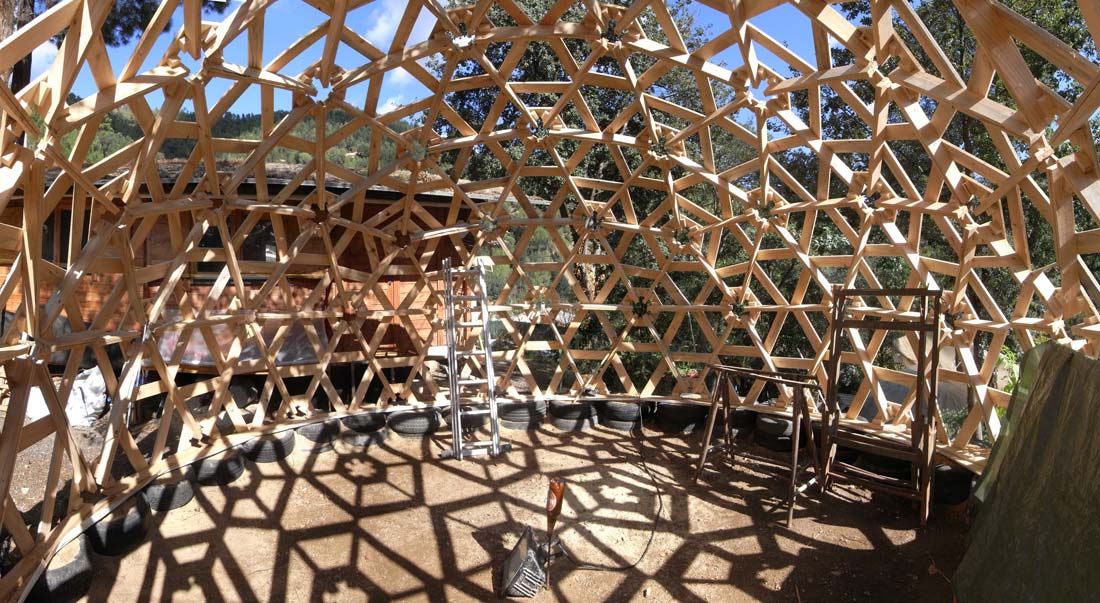 Any system used to capture the microscopic water droplets contained in fog and store them in liquid form can be defined as an “atrapanieblas” or “fogcatcher”.

Our research and our experiment involving fogcatchers was not aimed at designing the best possible, most efficient, perfect, fair and 100% ecological model. However, knowing that the water supply is critical to communities and individual development, we looked for a way to produce low-tech towers based on materials that can be harvested locally, reaching compromises and, as always, even open to using “waste” materials.

In Piracicaba we used bamboo, quite easy to find in that part of Brazil. Once more, the proposal demonstrated its flexibility in adapting to other geometries, other materials and situations, and finally its capability to adapt to different territories and sociocultural landscapes. 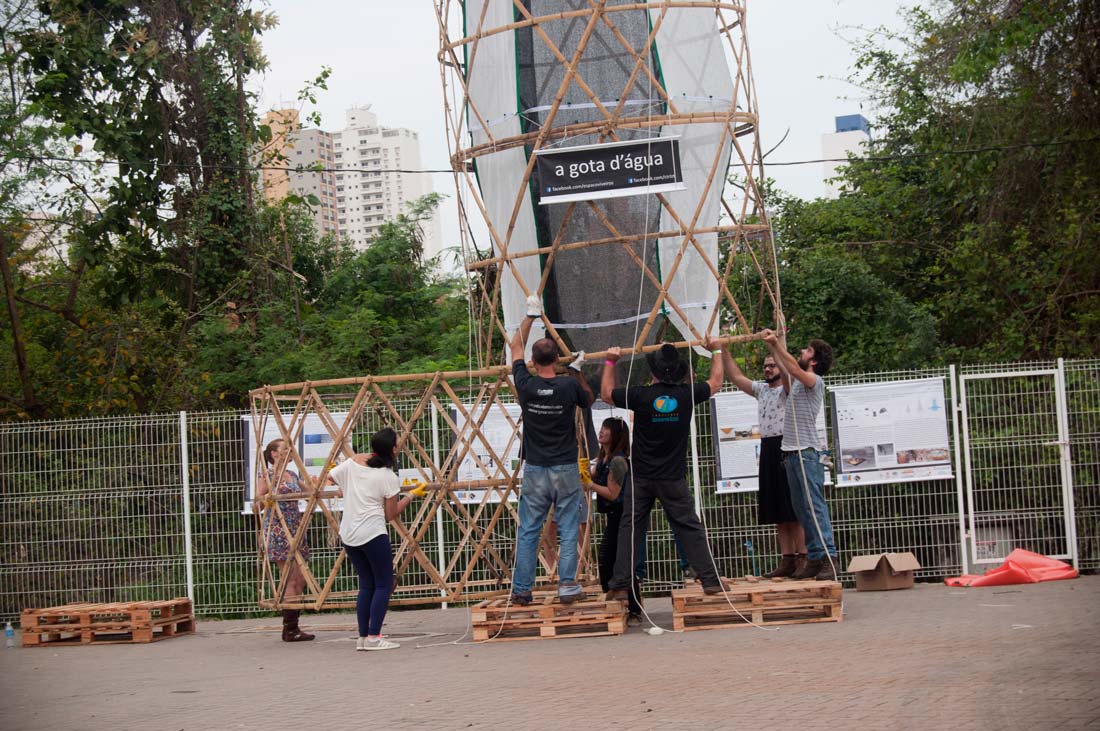 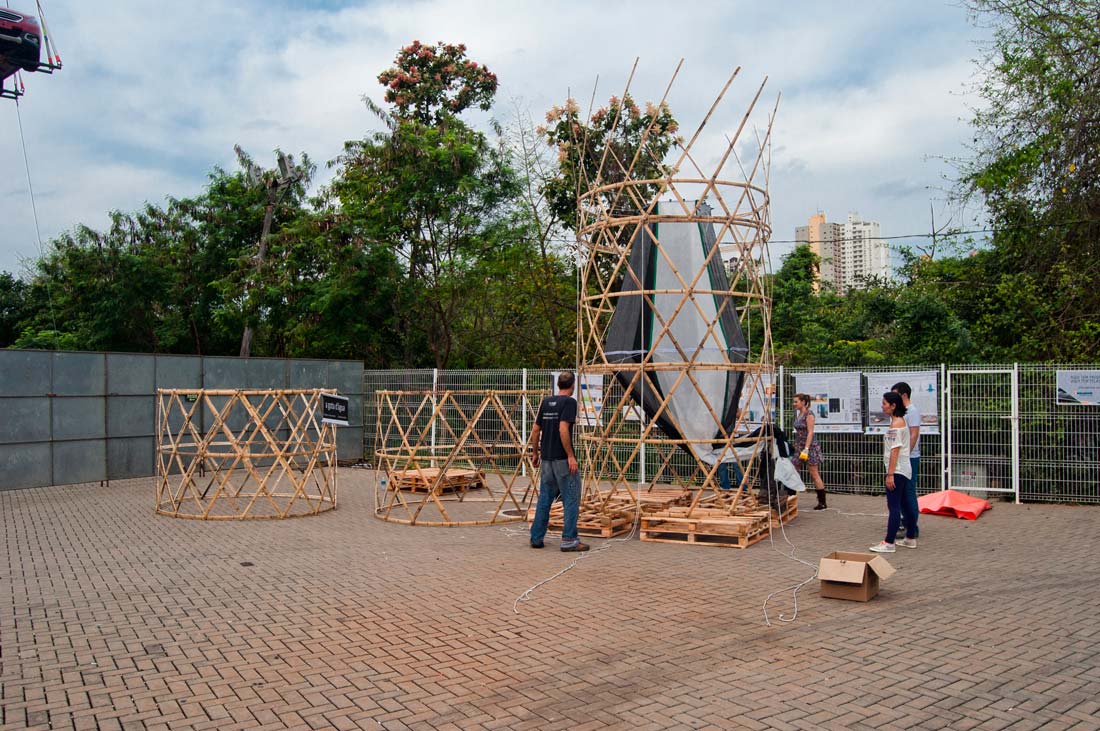 We like to articulate our workshops based on a double narrative. The first, most obvious aim is strictly pedagogical, in which the proposed didactic plan is developed to reach the established target. The second, based on even more intense training, begins exactly when the regulated activity ends, as the participants are invited to try to use their acquired knowledge and the prototypes they have produced for social purposes in the real world.

After an institutional three-day workshop on sustainability in architecture, Ctrl+Z challenged the participating students to follow through with the compromise to put the new resources into practice. They explored the territory in search of a community that might need the structure and the associated materials and developed an architectural project adapted to the community’s needs. In this way, a greenhouse was produced and donated to the “Jaulas Abiertas Universidad en Transición” pedagogical association, and a group of young student architects realized their first built project. 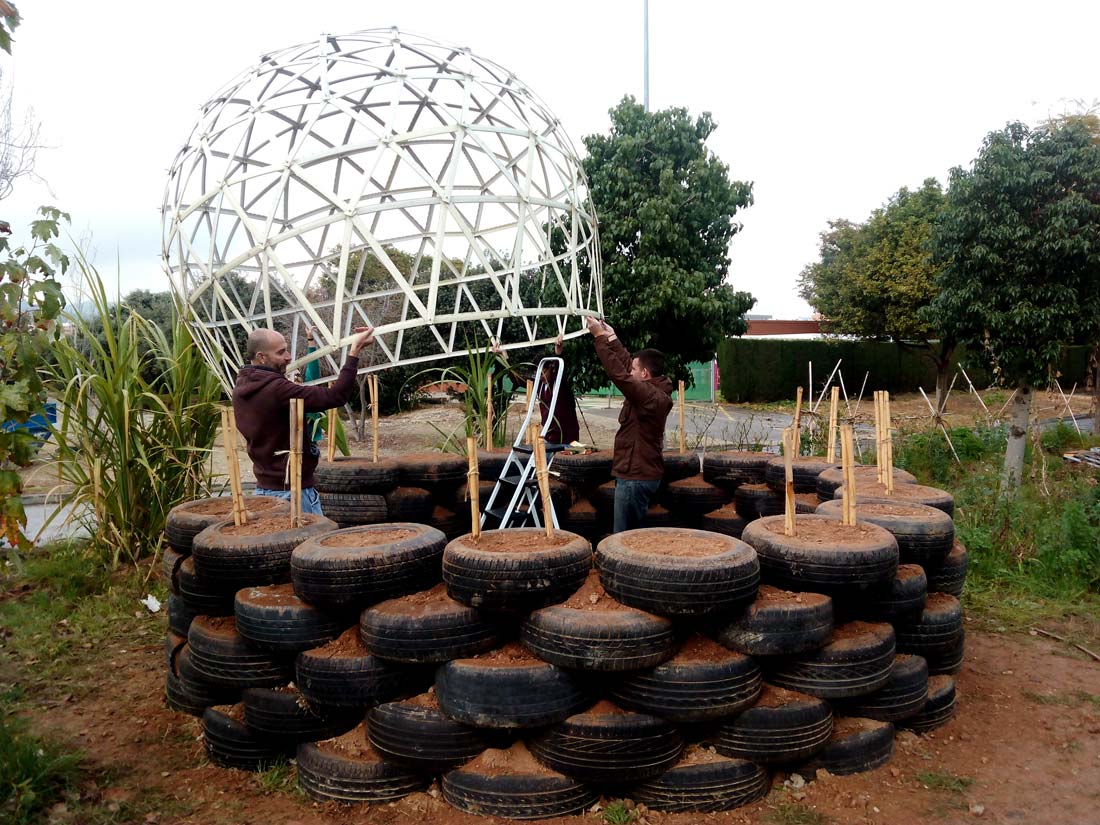 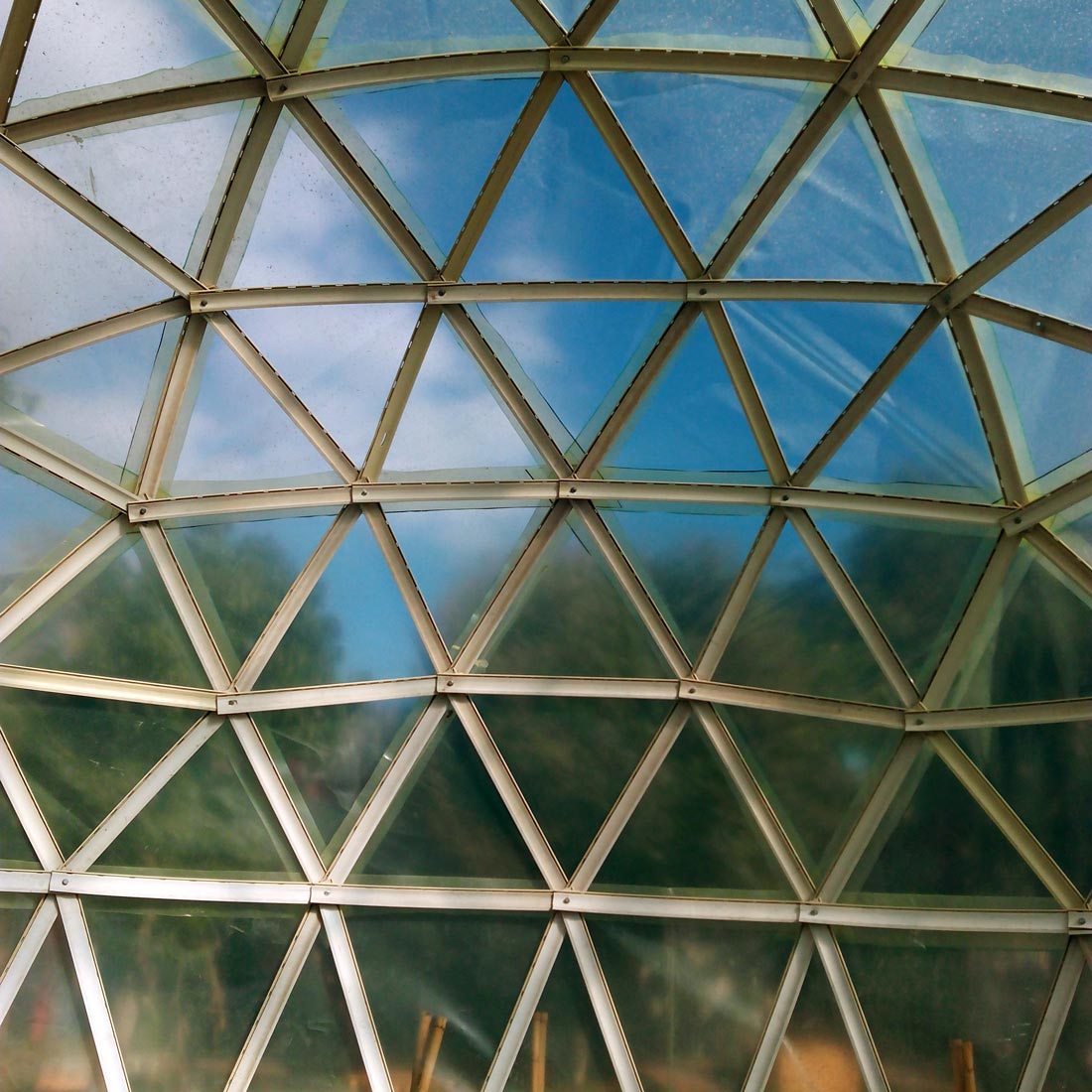 As part of Seville’s Christmas Program “Luces de Barrio” commisioned by Nomad Garden we had the occasion to build a structure inside the J. R. Murube High School grounds, where the association “Verdes del Sur” cultivates an urban garden as part of their food sovereignty neighborhood program.

We accepted the challenge to self build, with them, a socially useful structure through simple, inclusive and appropriable dynamics and using locally harvested materials. This was not incompatible with the apparent complexity of the proposed designs and with attractive aesthetics.

Thanks to the lightness and simplicity of the structural elements, everybody from housewives to children, grandfathers to school staff could participate in the collective construction of a new narrative and a new collective imaginary in the neighborhood.

Using the appropriate design and training protocols, together with gardeners, teachers and students, we built a structure which will last long after holidays end. At present, the facility is used as an environmental classroom by the school and as a meeting place by the association. 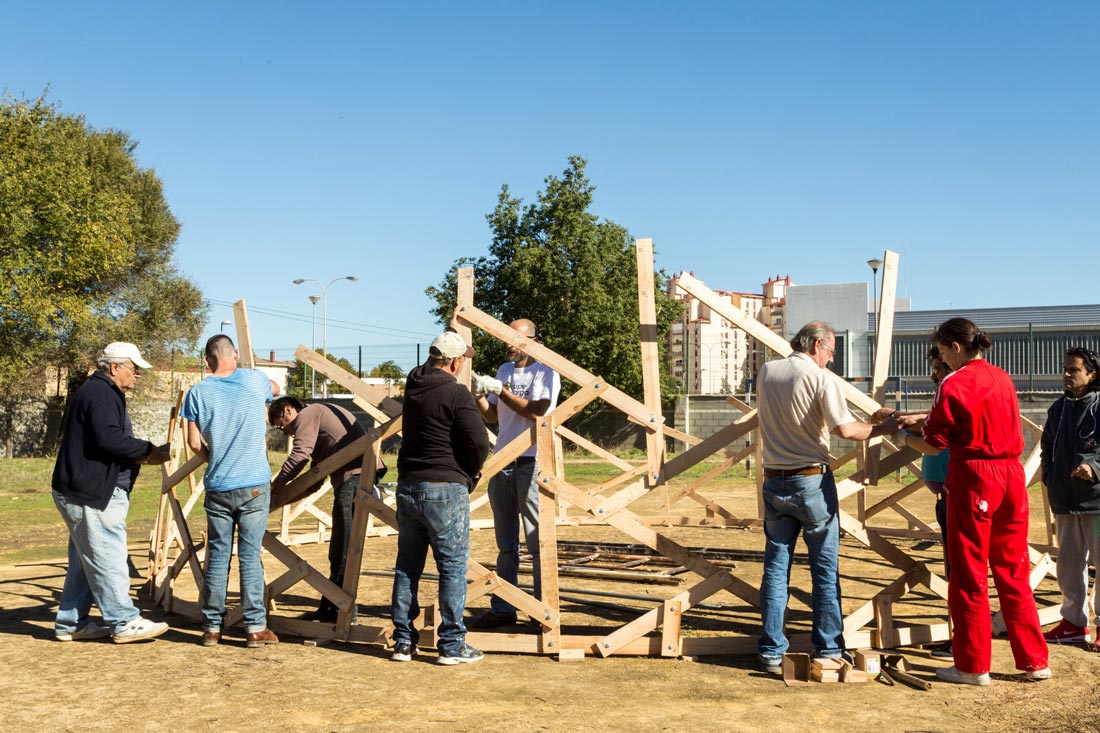 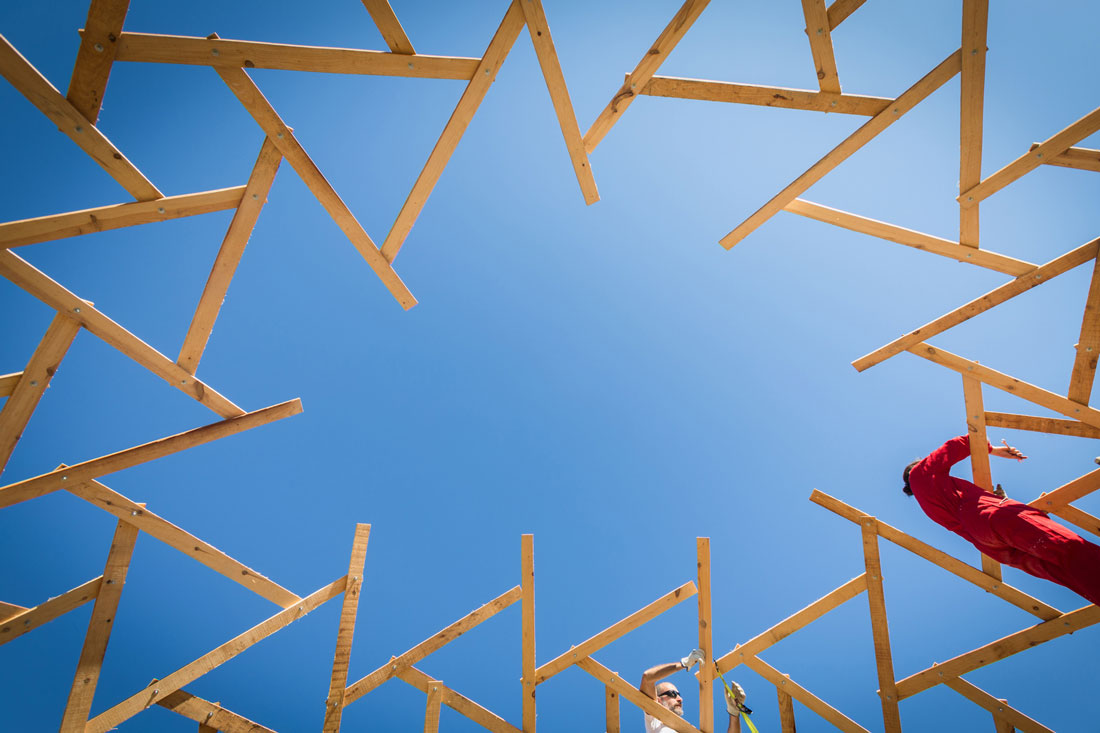 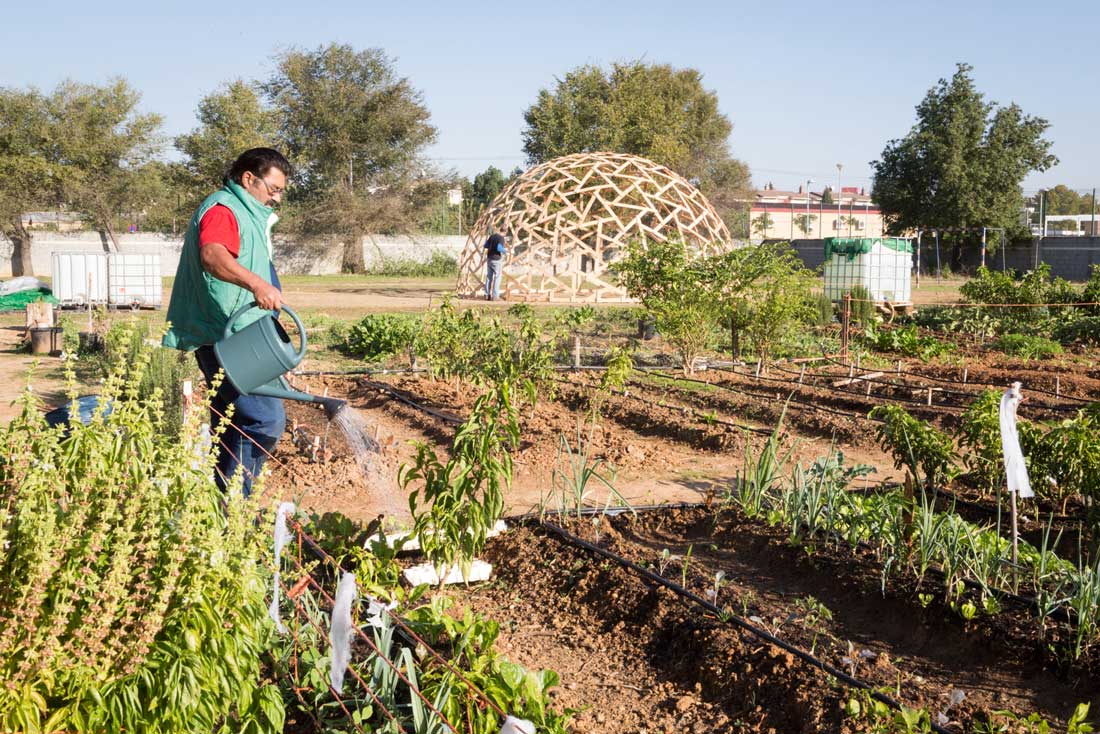 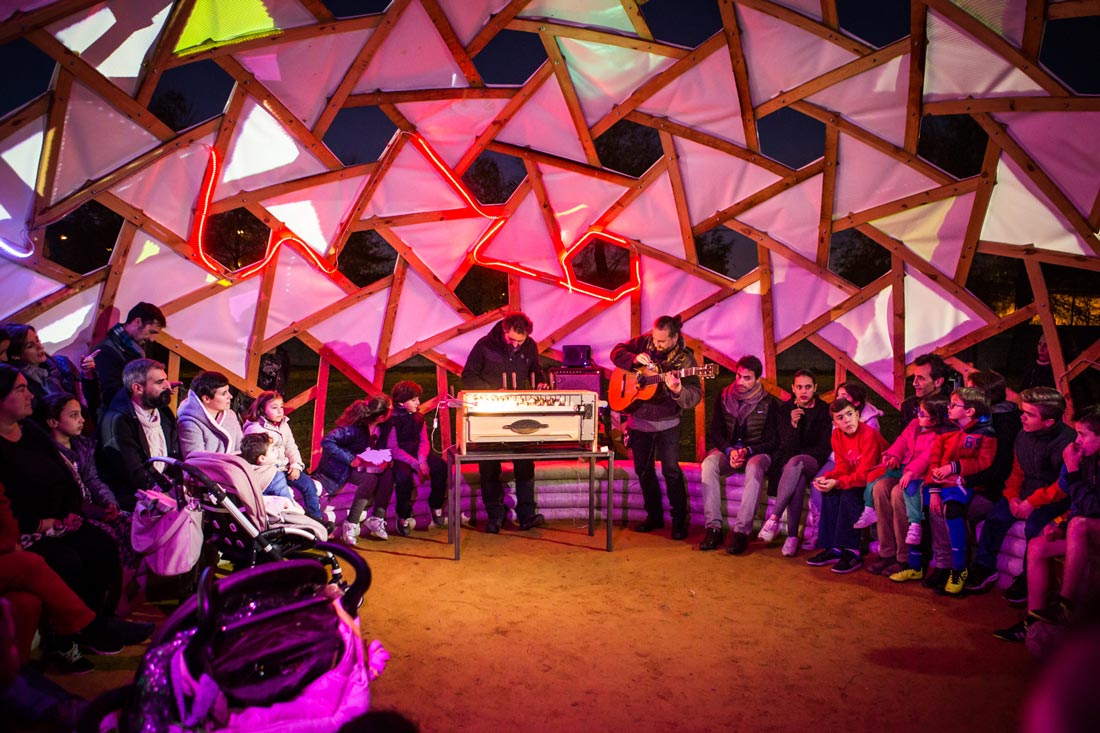 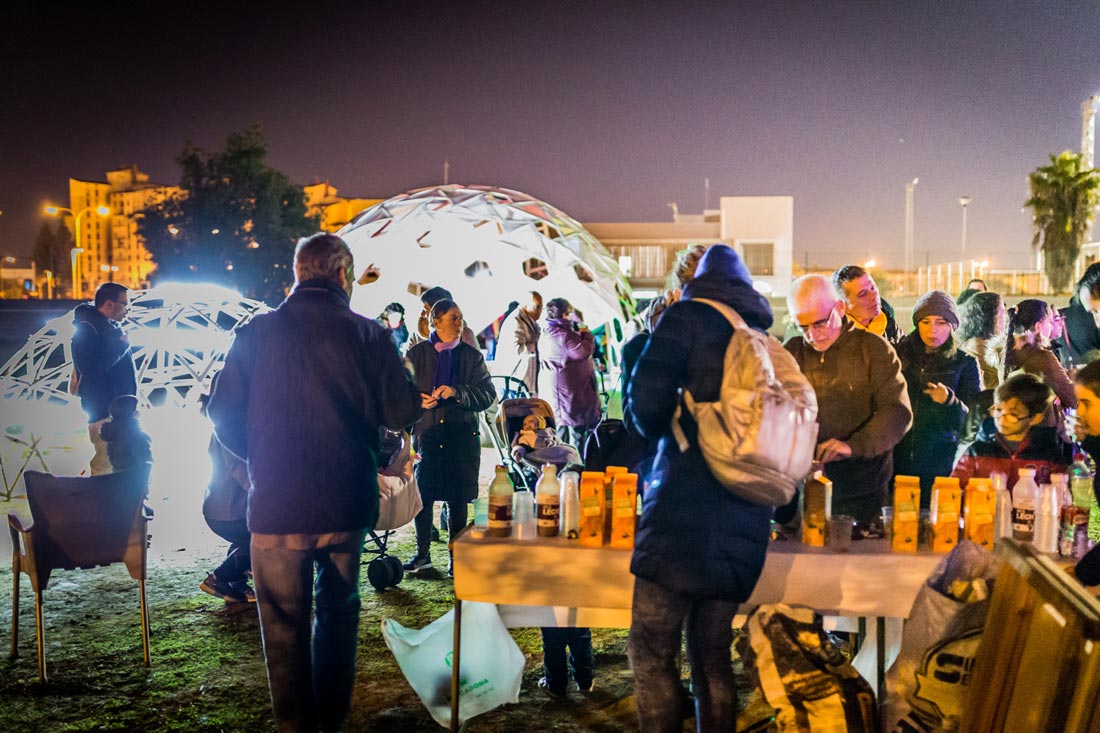 These iconic geometries endow the process with the power to raise self-esteem and contribute to a community’s identity through direct involvement in their creation.

New narratives are being created: they not only talk about construction but also cultivation, self-employment and enterprise creation. These narratives and communities are built day by day by the residents through small-scale daily action. With almost anonymous construction. But their sum, their order and their organization contribute to the creation of a strong community and a better neighborhood.

Similar processes occur with the structures that Ctrl+Z proposes. It’s all about balance, energy and organization. Little by little, table by table, bucket by bucket, thanks to the work and organization on the part of residents, the sum of simple actions, realities are built that far exceed the sum of individual actions and the potentials of the elements that make them up.

The residents will continue to write new narratives for their reality, narratives that they were already writing many years before our contribution, which we hope will help them to disseminate and receive well-deserved recognition for their work on all levels. 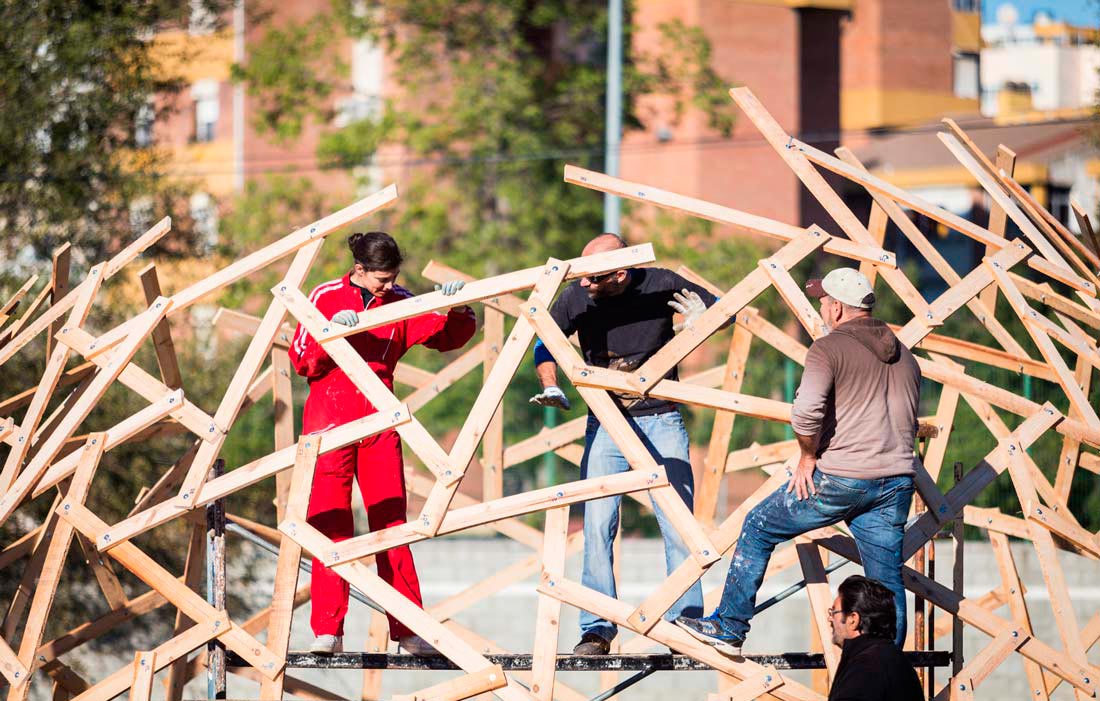