Cultural units involve a center of urban creation and experimental economies, based on the transformation of a vandalized construction.

The intervention proposes addressing the need for collective spaces, as evidenced by huge gaps and precarious structures common in the center of the city. It centers on occupying a building damaged during street protests for its use as a cultural infrastructure, articulating a series of initiatives led by groups of artists and local communities. 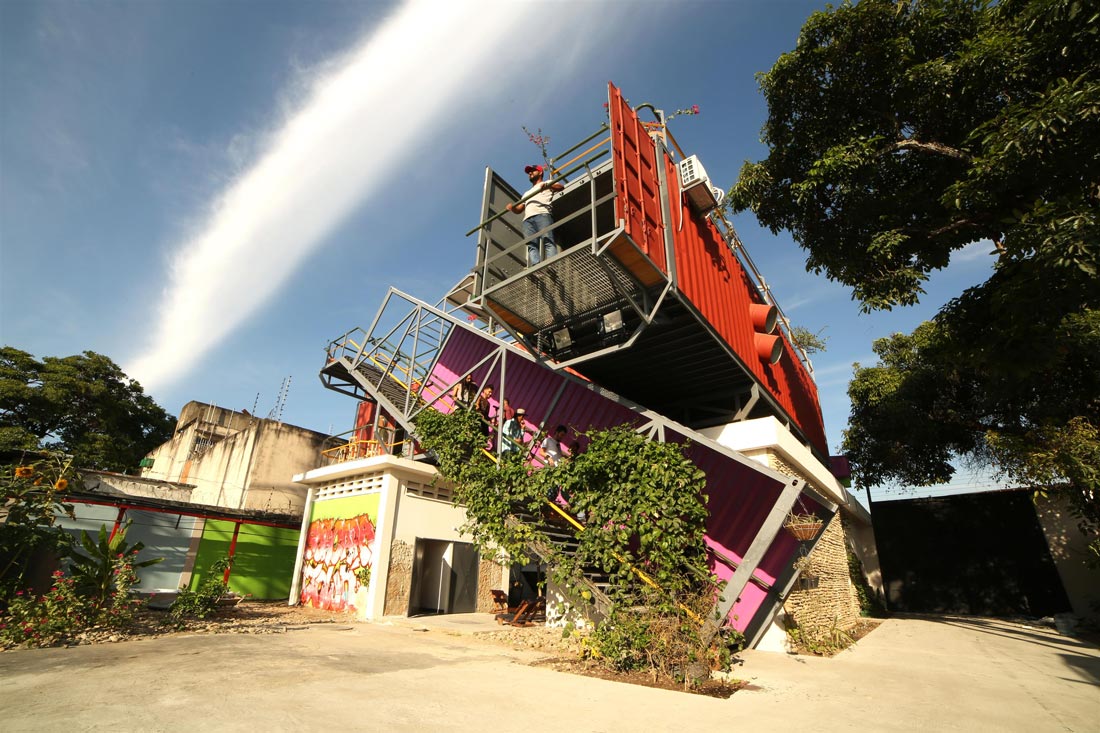 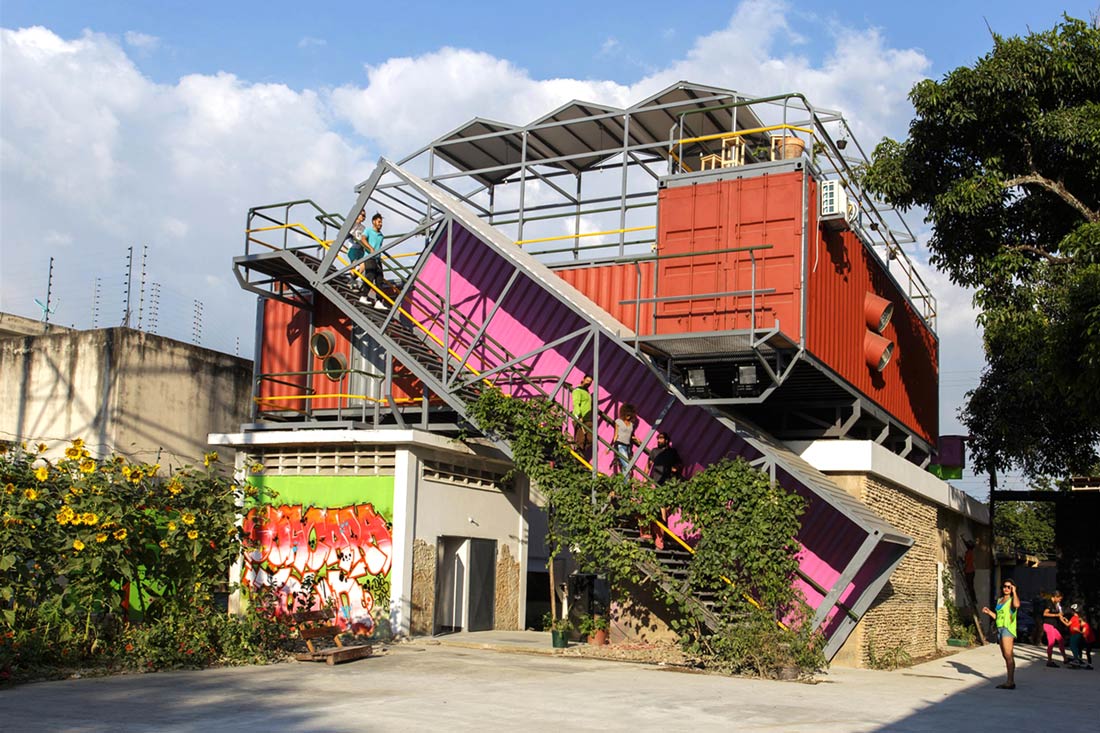 This project sets up an organism capable of supporting several emerging micro economies, which are independent of the conventional offer that predominates in the city. Within the sphere of cultural management, it fosters the development of initiatives that conciliate different kinds of projects and powerful collaborative relationships within a renewed social atmosphere.

The aim is to empower a community of emerging urban artists and creatives in their own environment that is governed by self-management. A series of trans-disciplinary tools combine in a professional atmosphere, focused on promoting an autonomous model for thinking and acting, that ties in with real needs and common problems. Understanding this opportunity to take up unrecognized efforts that have been rejected by conventional cultural structures, is also a goal of the project.

The main building brings together a creative circuit managed by social groups and organizations, and it is also where the city’s main communications tower operates, functioning as a hybrid infrastructure that emits autonomous cultural programs and public services.

The complex is formed by a battery of spaces made up of: an urban garden, cafeteria, audiovisual laboratory, recording studio and music room, gallery, multipurpose workshop, skate plaza, sports field and a stage for presentations. 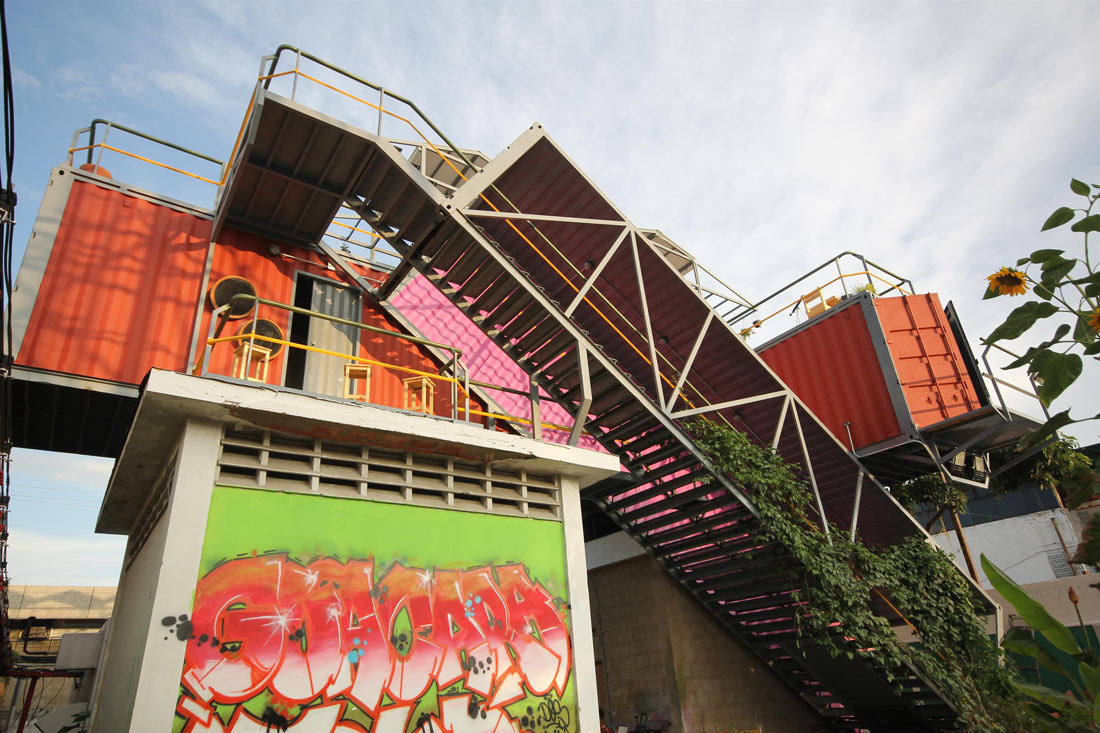 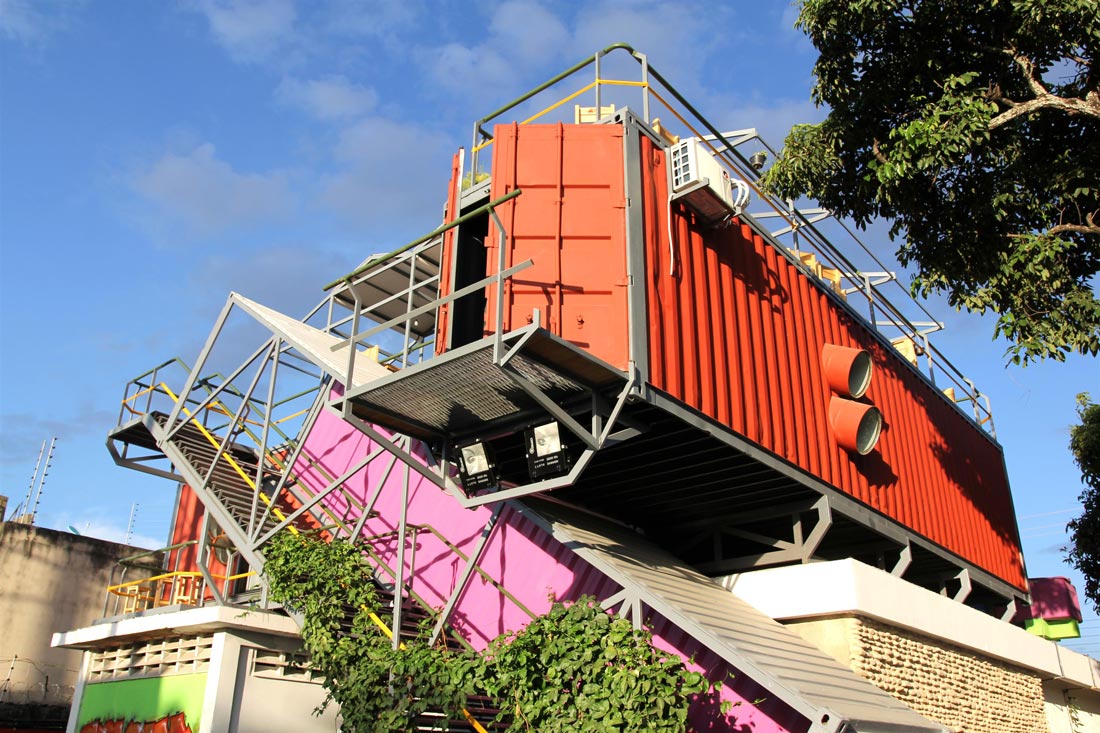 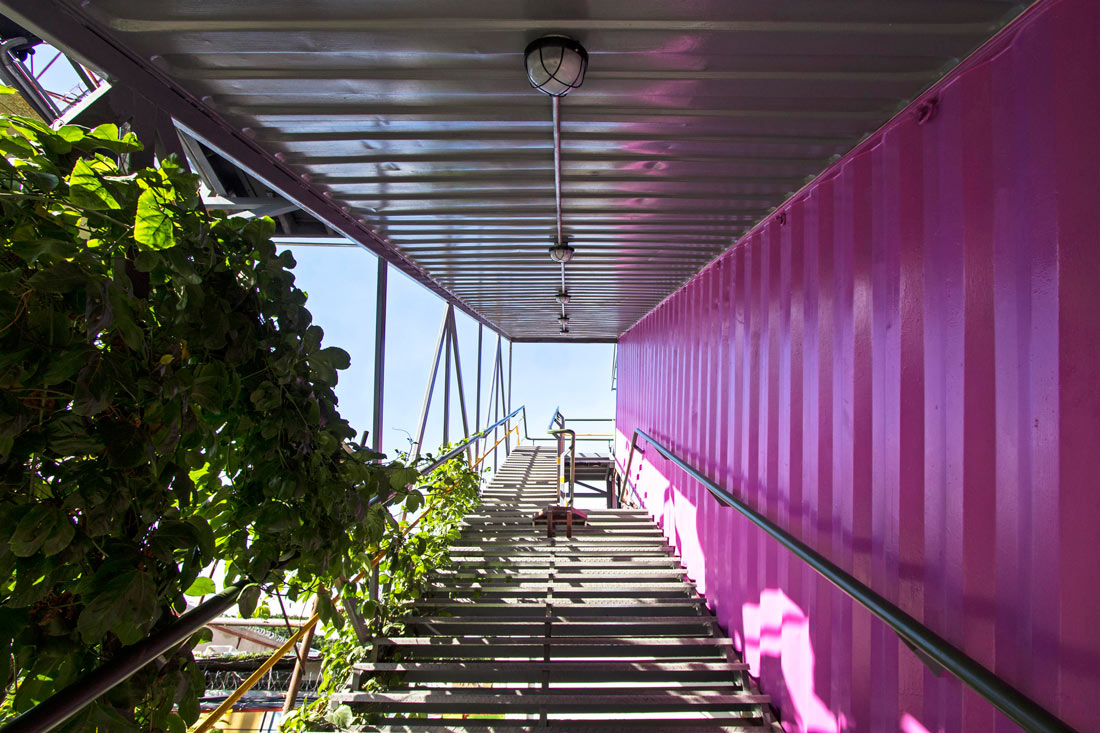 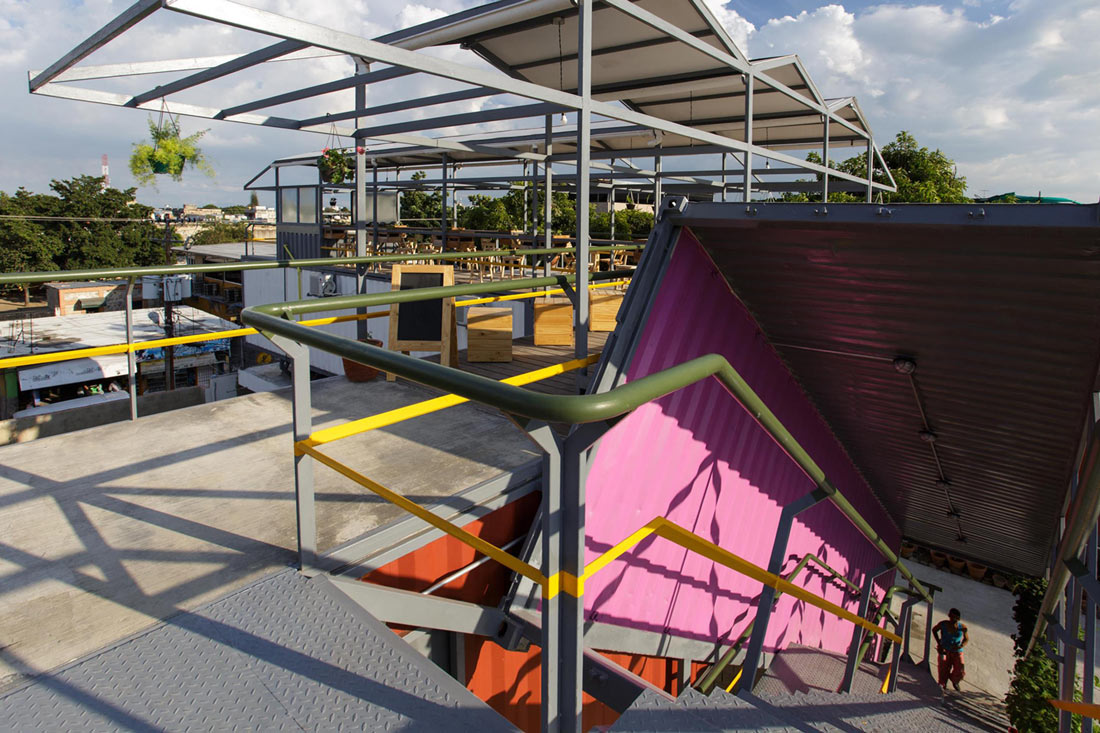 The project gained access to a state financing program that provides technical equipment and cultural tools, foreseeing the use of shipping containers to accommodate new spaces, after they were used to transport the equipment.

The strategy is based on outfitting the old building with these containers, inserting multiple structures into a single, more complex system, like parasites that lodge on a foreign body. The design establishes a use of parts and components from modules and patterns similar to the properties of the structuring objects themselves. It is a substructure supported by previous foundations, a building assembled on top of another, by means of individual terminals that are added until they eventually shape the whole.

At the moment of promoting the intervention, the project also takes the reuse of materials as an action to re-signify the value of components that may have second or third lives after fulfilling the function for which they were originally created. It highlights the possibility of construction using waste generated by industrial production.

One premise is to incorporate construction technologies that allow for a resilient evolution of the building over time, based on local knowhow and tools. The small artificial system manages its own energies, and the spaces are ventilated and have natural lighting, with a strong presence of huge endemic vegetation. It is an artificial body but tied in with the conditions of the tropics. 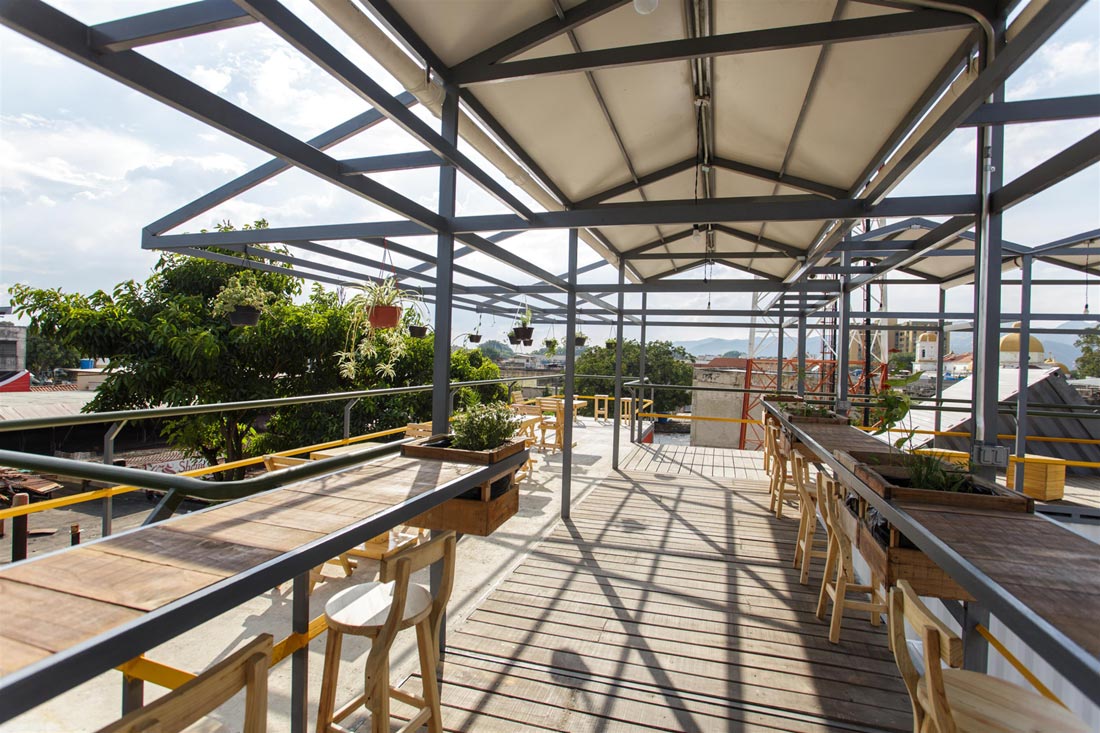 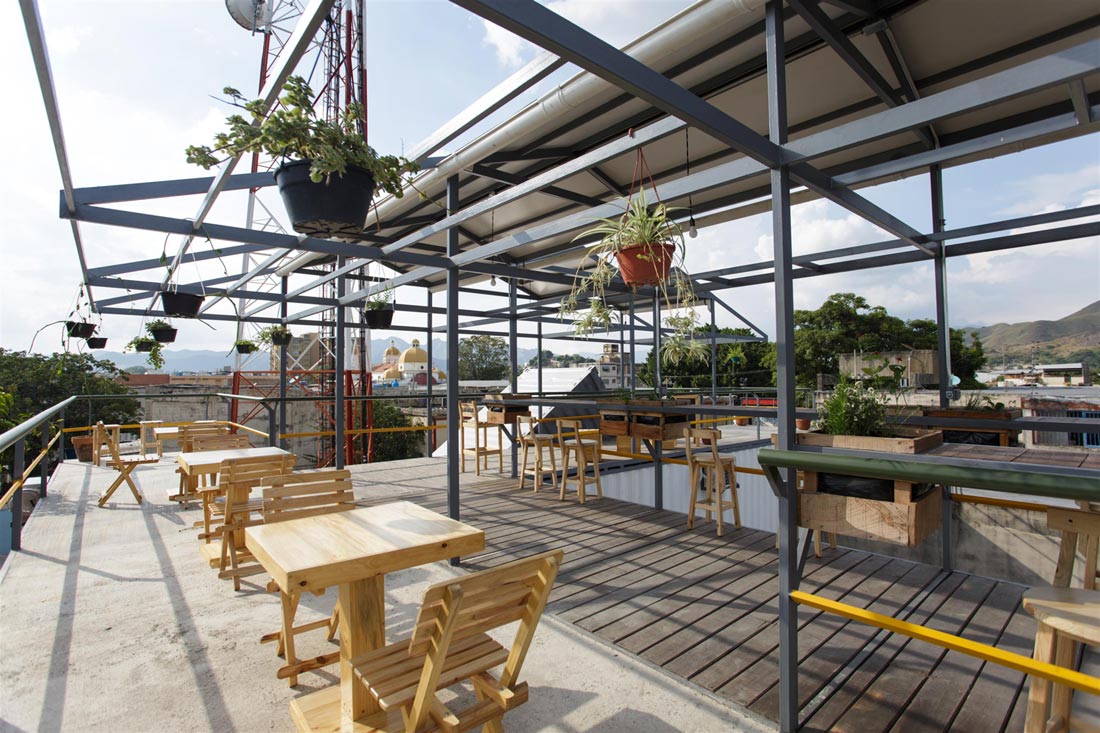 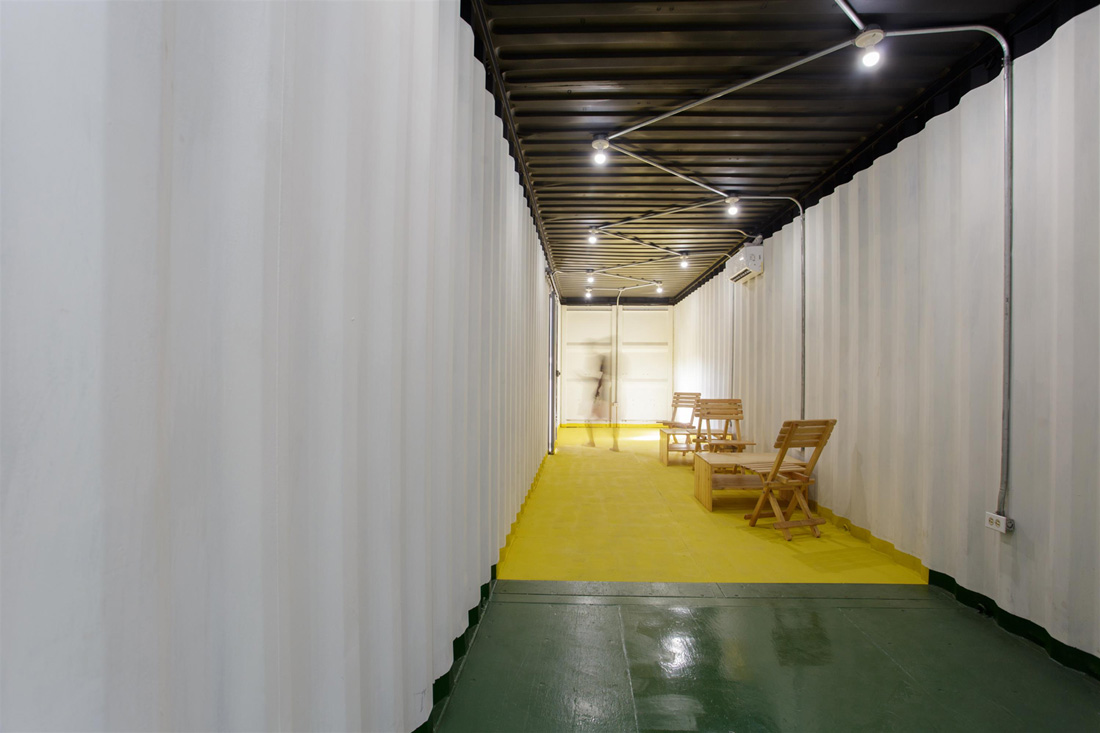 The project spreads out into a small-scale territorial operation that also seeks to rescue a damaged and abandoned lot, a kind of urban leftover. This intervention in a space of the city not only makes use of existing structures but focuses on the possibility of promoting a process of habitat transformation rooted in precise actions.

This space constitutes a new center for plural participation in the city. The intervention is supported by a local history that groups together multiple cultural organizations, neighborhood groups and social leaders, who have been focusing their efforts for years on generating better and stronger infrastructure conditions within the neighborhood through public action.

This project is the first operation in a significant renovation, which foresees establishing a center for social exchange in the community with the potential to promote unprecedented experiences of sustainable development. Its construction is committed to consolidating other territories and protocols of solidarity and coexistence, drawing on a network of multiple disciplines that use these facilities as a space to strengthen human capital and the development of productive relationships within the community.

Once it starts providing these alternative cultural services, the project will become the trigger for new processes of democratic design, a social production of the territory based on the right to the city. Many exhibitions, assemblies and cultural activities outside the conventional offer are constantly carried out in parallel to the operations of the cultural core. 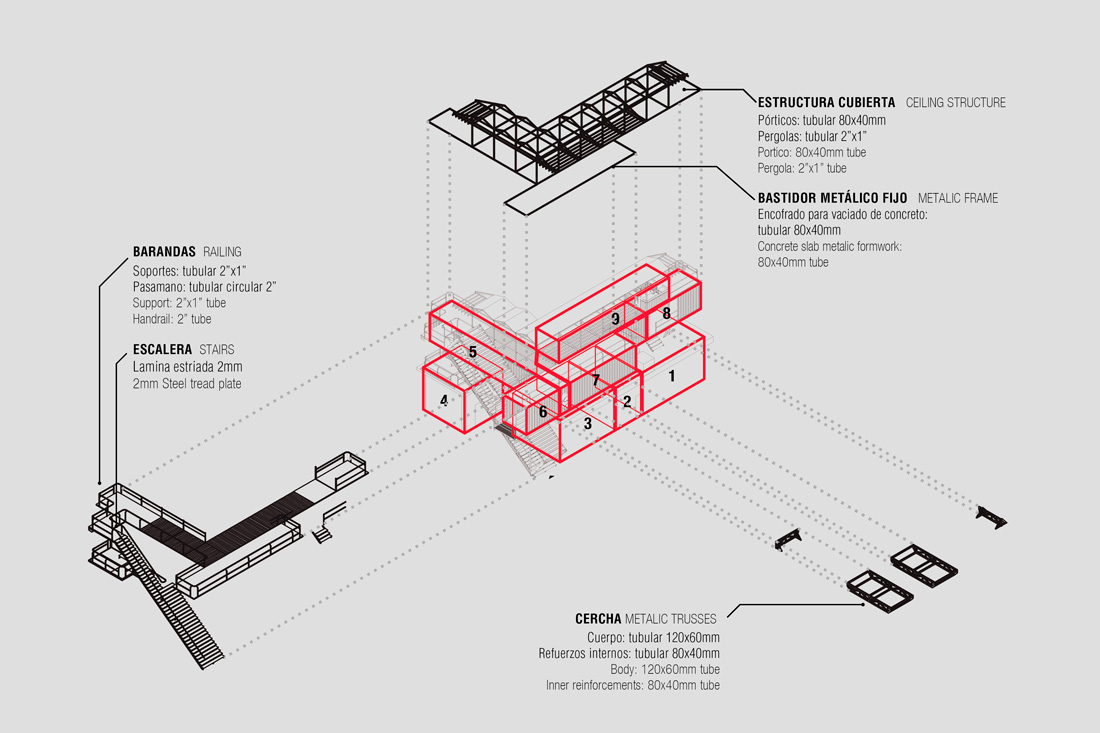 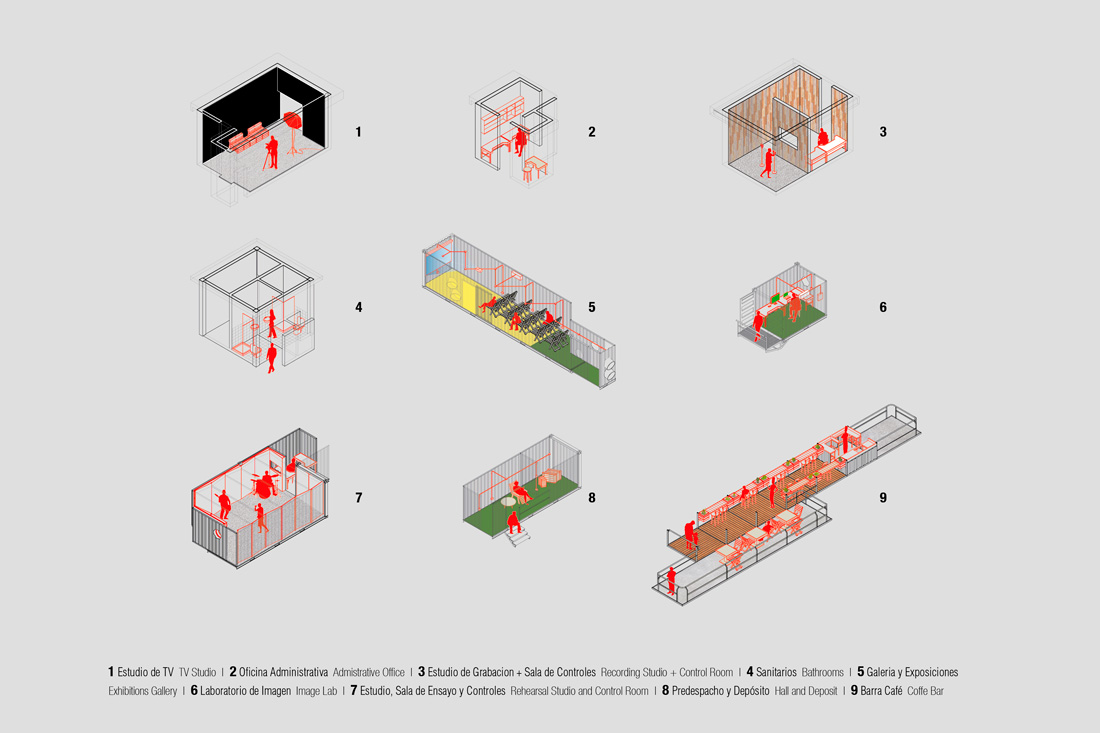 « The Vessel: A Public Landmark
The Bentway: Harnessing the Void Underneath the Infrastructure »