This public facility houses an adult education center, a language standarization consortium and a hotel on a triangular plot in the Parliament district. Two of the three sides of the site are defined by the heritage-listed frontage of the former Planell glass factory, built on carrer Anglesola in 1913. The building makes use of the entire plot, acting as an intrinsic part of the urban landscape, although the triangular shape and the classified façades prevent it from occupying the entire site. The programme is distributed across four levels which are set back from the south-facing heritage façade. The resulting atrium reconciles construction and heritage, improves the natural lighting for the classrooms and provides a heat and sound barrier. This long, narrow courtyard is reproduced at the northern vertex, which exhausts the geometry but acts as a relational system between the administrative uses of the building and the exterior. The building section shows how it controls and manages the air under natural conditions. In winter, it is necessary to control heat loss due to air renewal, redeem the heavy internal load built up due to the inertia of the wall structure, and draw fresh air in from the atrium, which thus acts as a natural air recycler. In summer, the heat has to be dissipated by moving the largest possible volume of air, and fresh air must be strictly natural, using solar chimneys and chimney caps that apply the Venturi effect. Cross-ventilation between the courtyards is ruled out by the programme and the need to avoid conflicting noises. The building therefore gives each strip of usage space a long structural break where the air circulates vertically, ‘pulled upwards’ into the chimneys by the power of the sun. These chimneys also give the building its silhouette and a distinctive, transparent materiality. 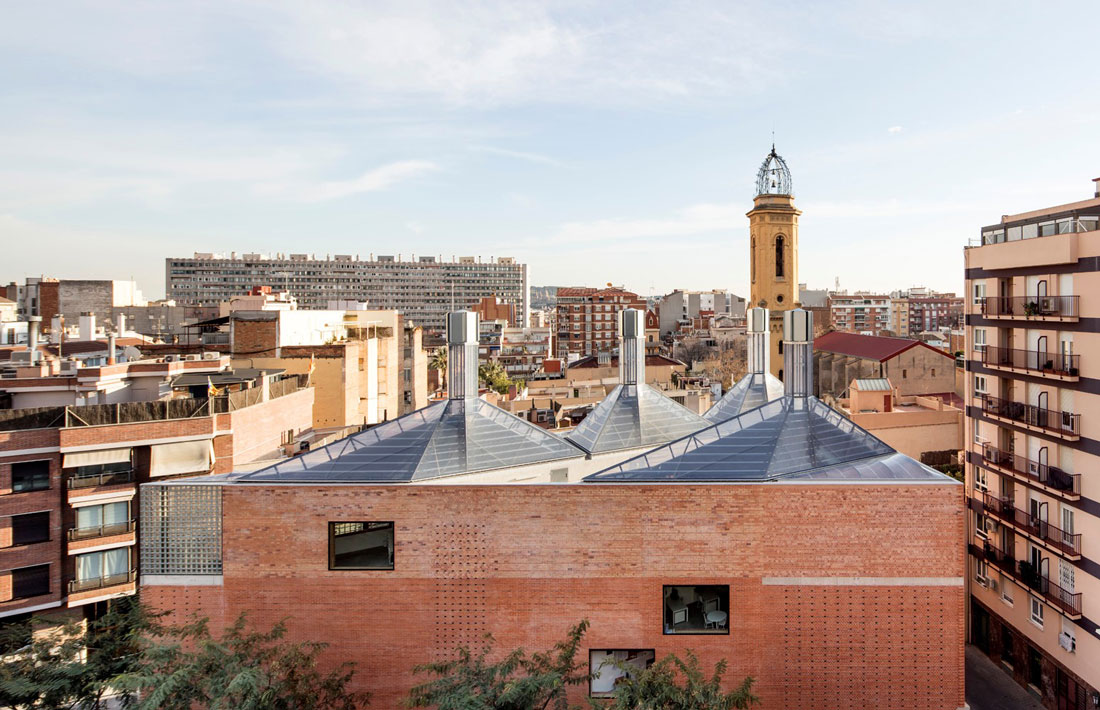 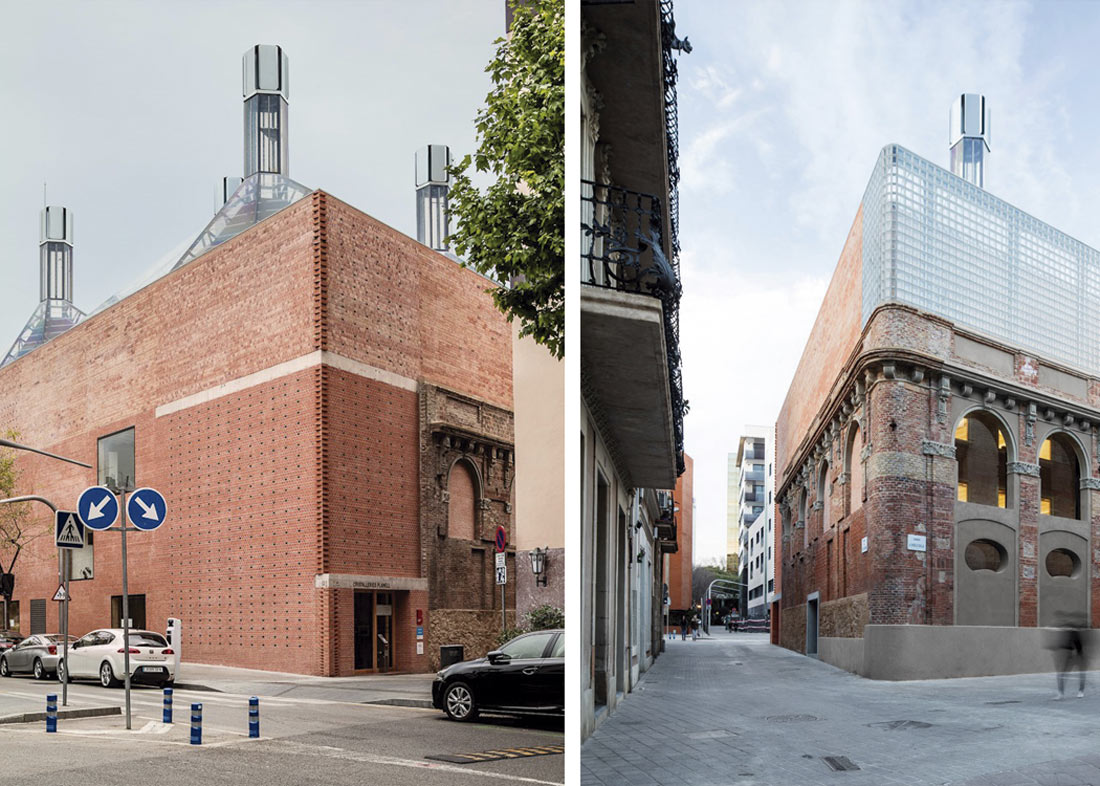 The building’s volume is derived from the strict triangular geometry of the plot, drawing on the site’s energy and urban function. The brick material was chosen in line with a desire to highlight the heritage façade, integrating it into the new construction as opposed to singling it out – making use of it as opposed to sacralizing it. To that end, we joined new an old on practically the same plane, using similar materials and techniques and complying in both cases with requirements related to enclosure, solar gain, and ventilation for rooms and interior courtyards. This materiality is derived from structural principles while it is also complementary: in order to improve lighting conditions in the interior courtyards and to add to the façade an element associated with the history of the Planell glass factory, we incorporated solid glass blocks into the envelope to let light into the north courtyard and provide solar gain in the south courtyard. 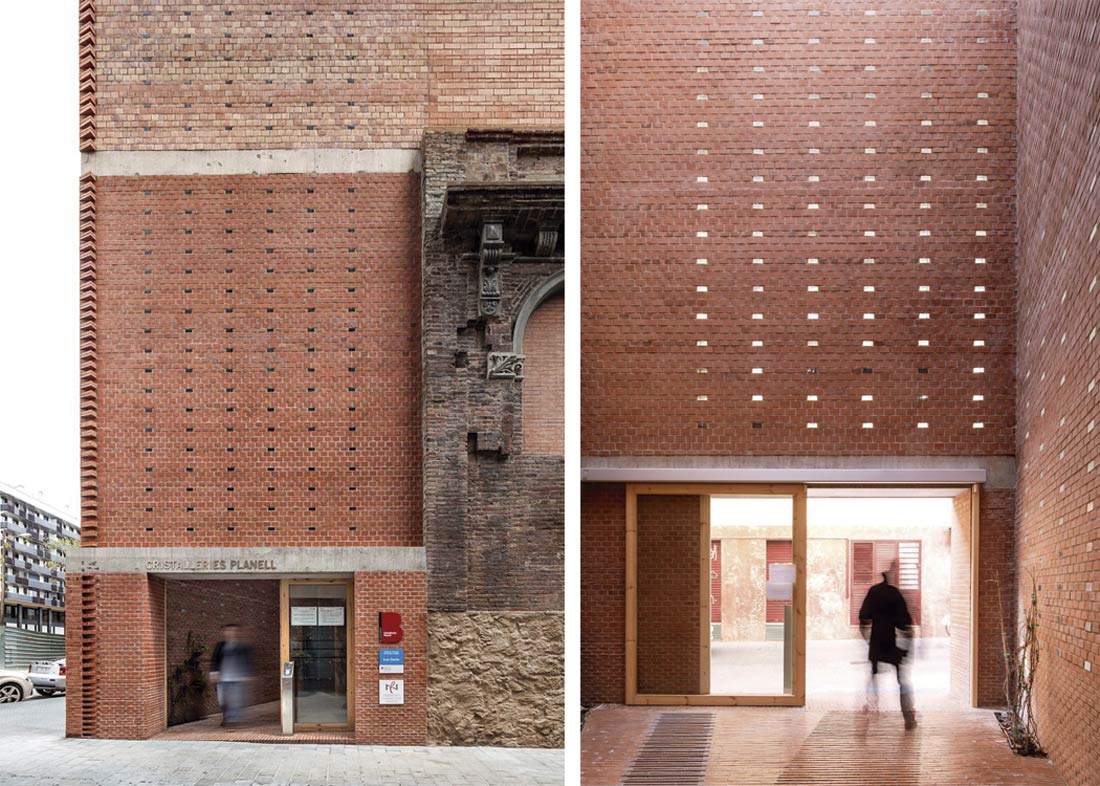 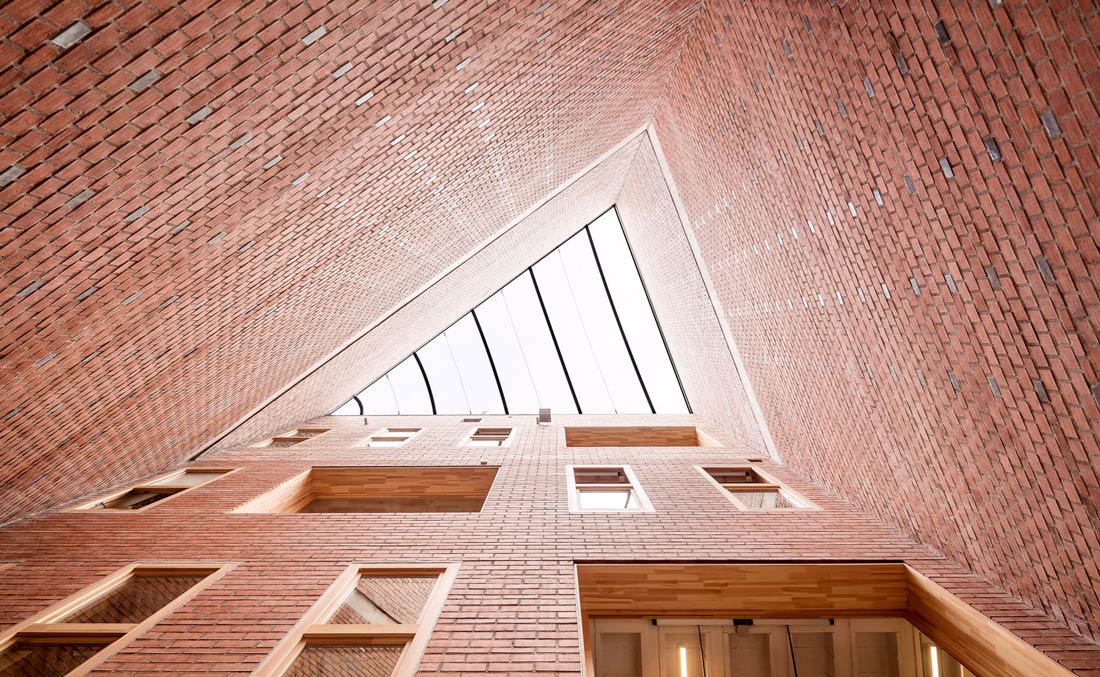 The main strategy aimed at achieving energy efficiency involved reducing the energy demand through the optimization of natural lighting, natural ventilation and thermal inertia. However, the use of highly efficient (geothermal) heat production and cooling systems was necessary to ensure comfort levels in keeping with current regulations. This minimum energy consumption (the building has a maximum consumption of 30KW, one-third that of a standard building) had to be balanced out by a percentage of production in order to comply with the municipal facilities’ responsibility of achieving “nearly zero” energy consumption.

The facility generates electricity through flexible solar panels installed on solar chimneys. The solar chimneys’ absorbent layer is a black sheet that must reach high temperatures in order to generate air flow. Tests were undertaken during the construction to ensure that the photovoltaic solar panels would maintain the required temperatures in simulations using the absorbent layer. As a result, panels (3 KWp) were installed over a surface of 12 m2 on areas of the chimneys with the optimum orientation in order to produce the energy needed for the building’s consumption without affecting the effectiveness of the chimneys.

The two basic tools used to ensure comfortable climate conditions in the building involved harnessing and activating inertia (through the load-bearing structure) and air circulation. There is no artificial air conditioning, but air does need to be moved in a controlled and effective way. In winter, there is less need for air circulation to take advantage of the high internal loads (using CO2 sensors) derived from the building’s use as an educational facility. In summer, more circulation is needed and in sufficient quantities to lesson the internal loads and avoid overheating.

The air is moved by a natural motor, which serves as the building’s roof at the same time. It is made up of four solar chimneys that generate three natural ventilation systems based on their materials and geometry: the chimney effect created by the difference in height with the interior spaces; the Venturi effect created by the chimney caps, which guarantees ventilation after dark; and the greenhouse effect created by layering a transparent surface (etfe) with a black surface. The system reaches higher temperatures in the summer (necessary to move 16,000 m3/h) than in the winter. The pyramidal geometry of the chimneys is derived from the sun’s movement throughout the day during the summer months. 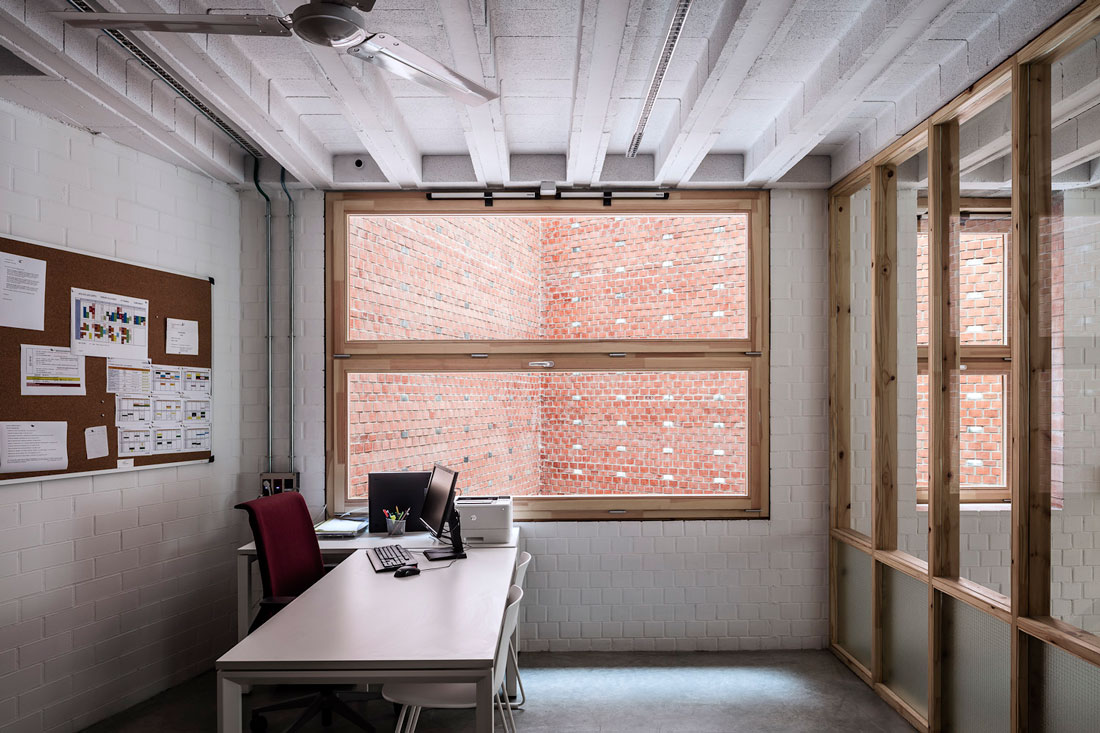 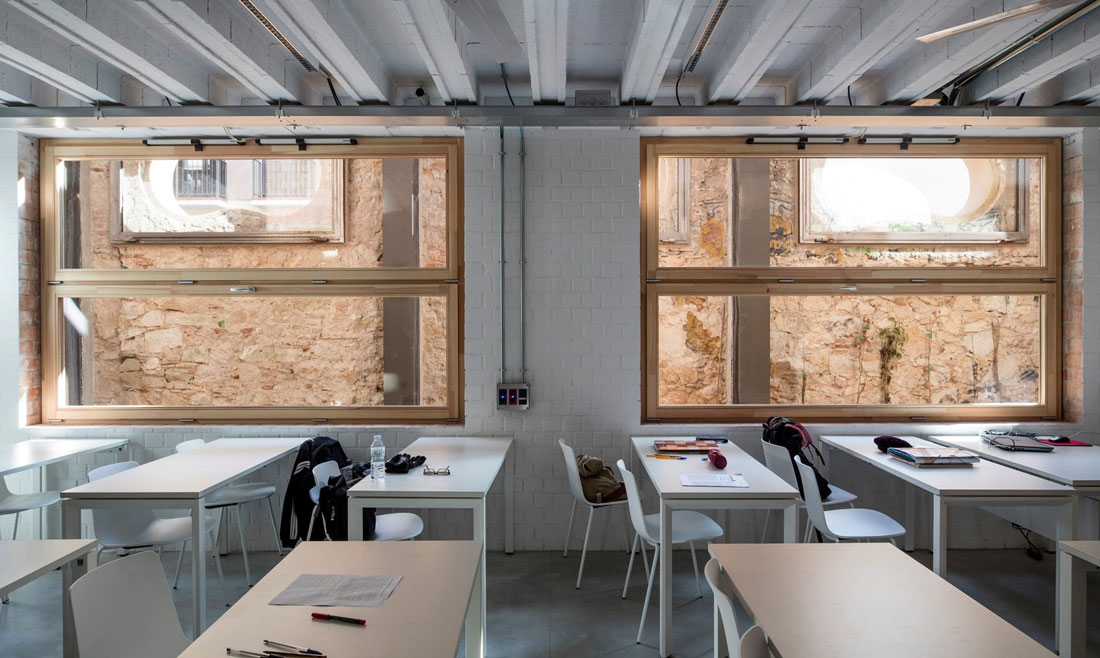