Is the battle against gentrification already lost? Can tactical housing be a valid instrument to confront this problem?

Urban centers are evolving under great pressure, with serious consequences for inhabitants. On the other hand, there are still different types of urban voids spread throughout the city. We find, for example, disused lots or buildings that can still be developed, representing interesting opportunities for the fight against gentrification. 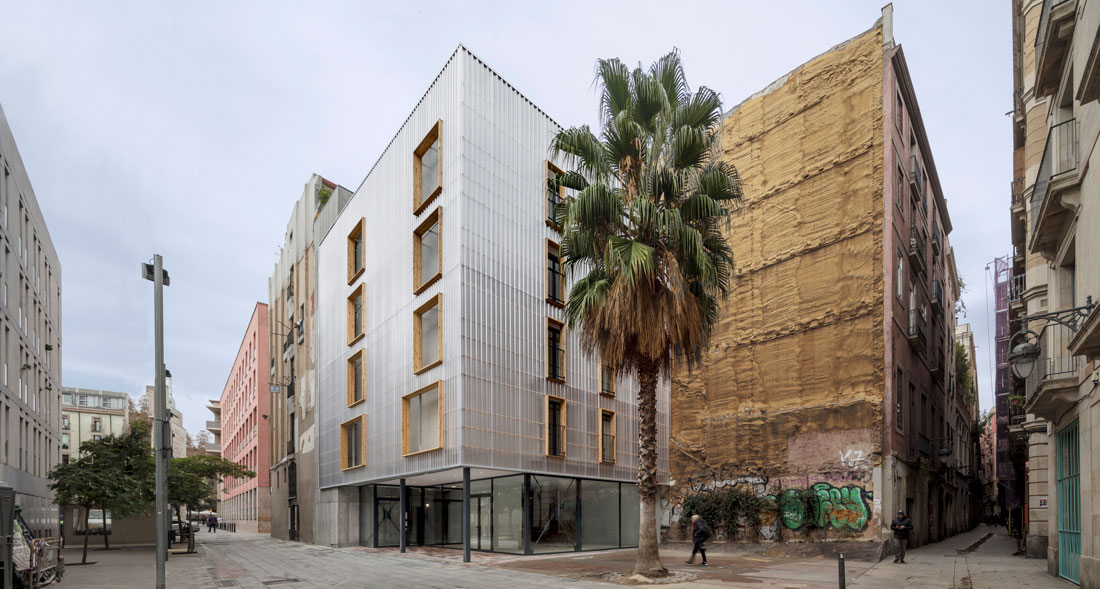 Provisional Proximity Accommodations (APROP) intend to address this situation. They are based on a wider strategy that responds in an agile, urgent and pragmatic way to emergency situations resulting from inadequate housing. This program helps to avoid the dramatic consequences of the forced displacement of residents due to evictions or other reasons related to emergency. 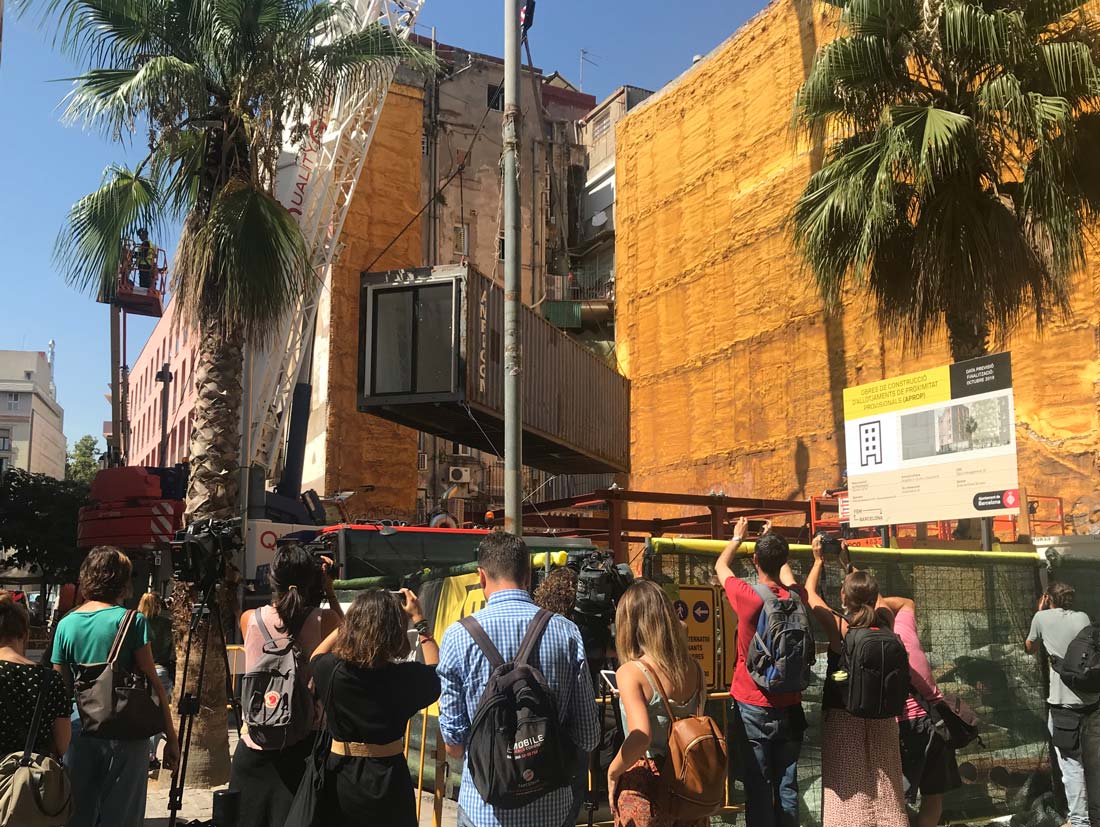 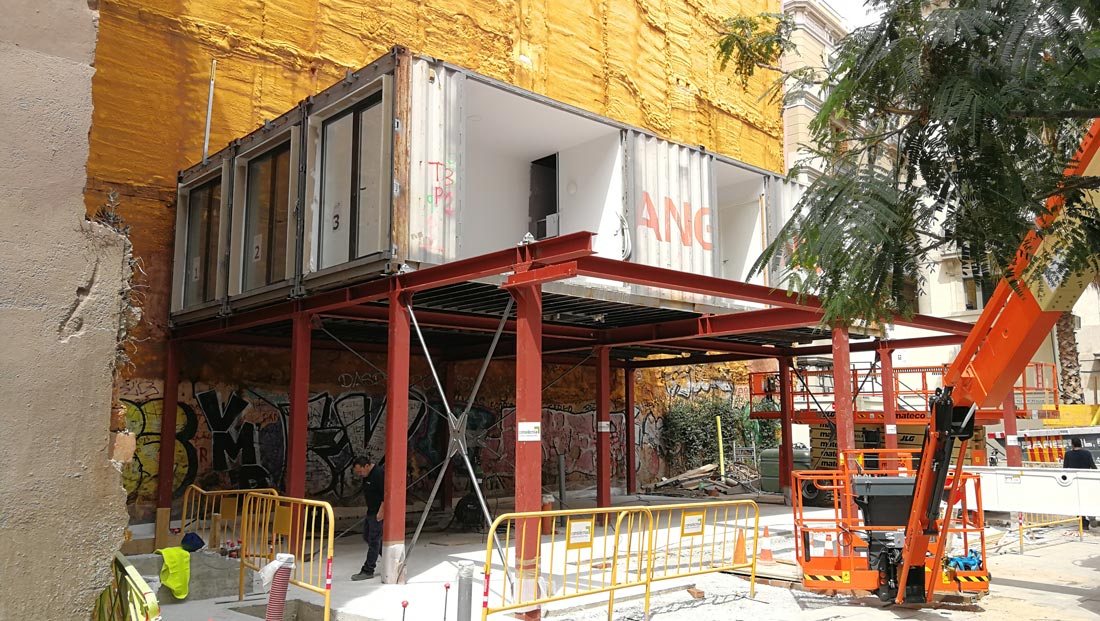 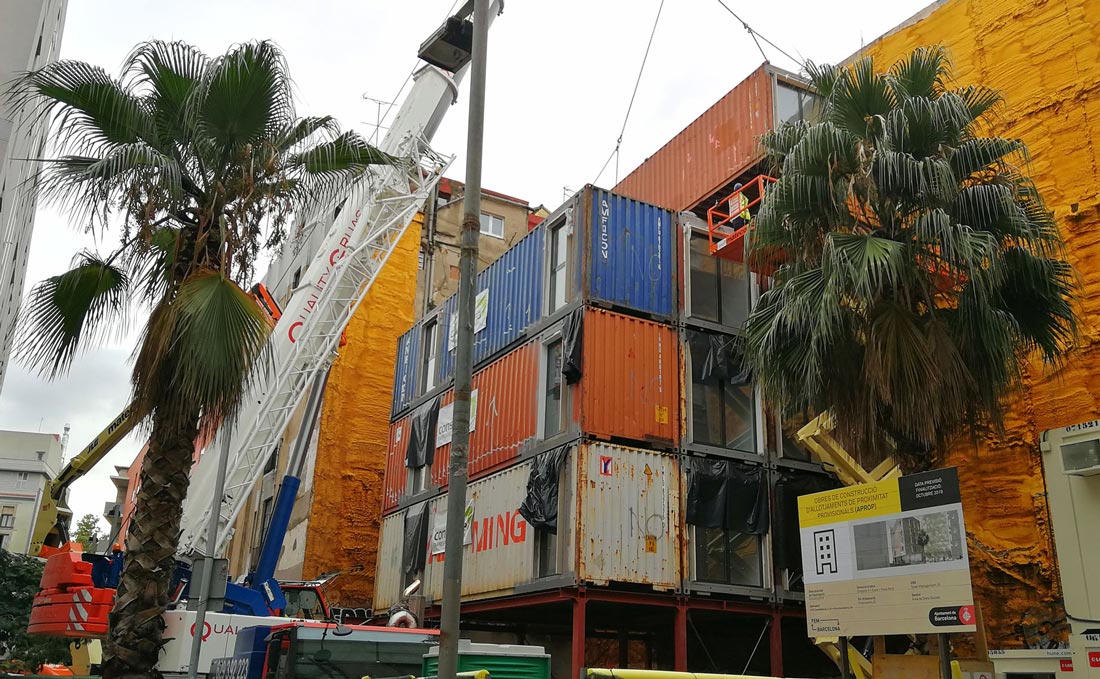 These housing facilities are characterized by the fact that they are modular, transportable and removable, which allows for quick mobilization of empty spaces in the city for different time periods. These buildings can also incorporate some public facilities or spaces for community use. 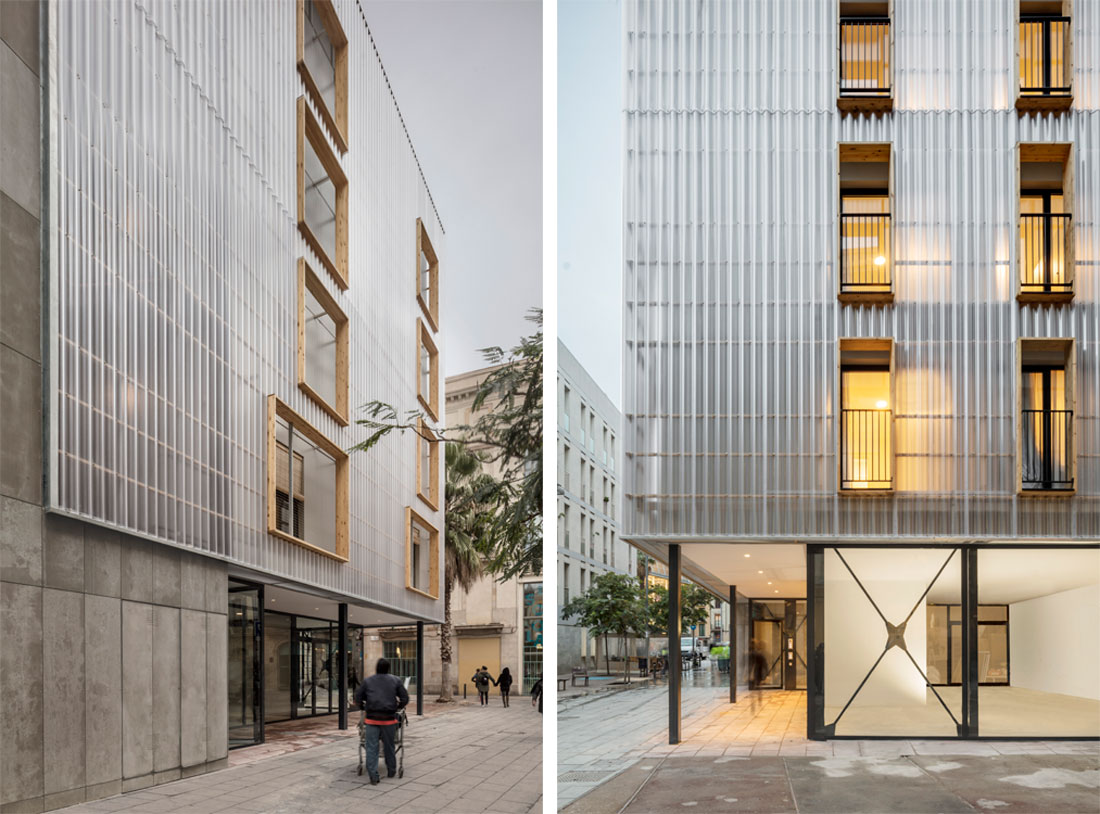 In the case developed in Barcelona’s Ciutat Vella neighborhood, the project is located between Nou de Sant Francesc street and Josep Pijoan street. Because of the nature of the building and the three-month offsite prefabrication process, the on-site building period has been limited to four months. 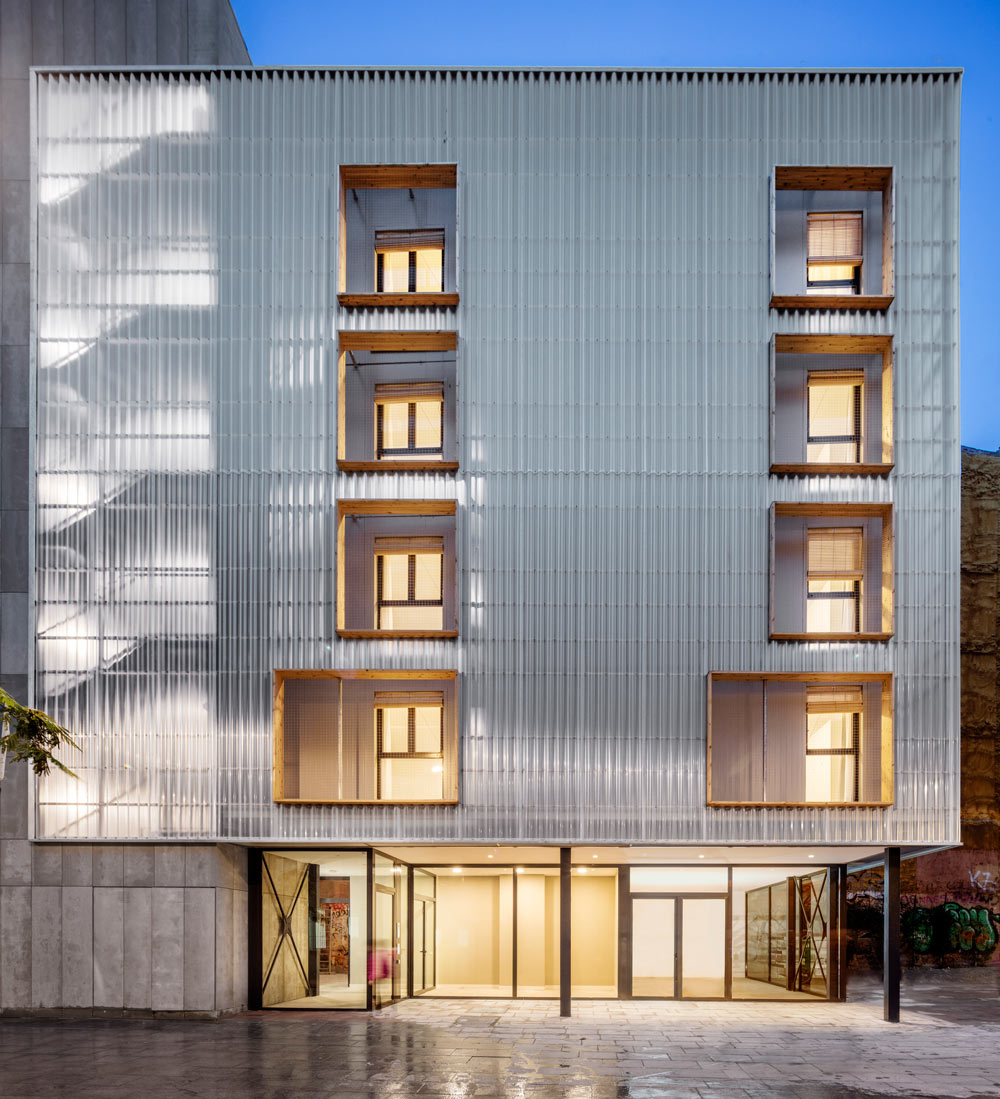 The building consists of prefabricated modules that combine to form a compact volume. It consists of 12 dwellings: 8 individual and 4 double modules. All accommodations have at least two façades, with northeast and southeast orientations, which provides cross ventilation. 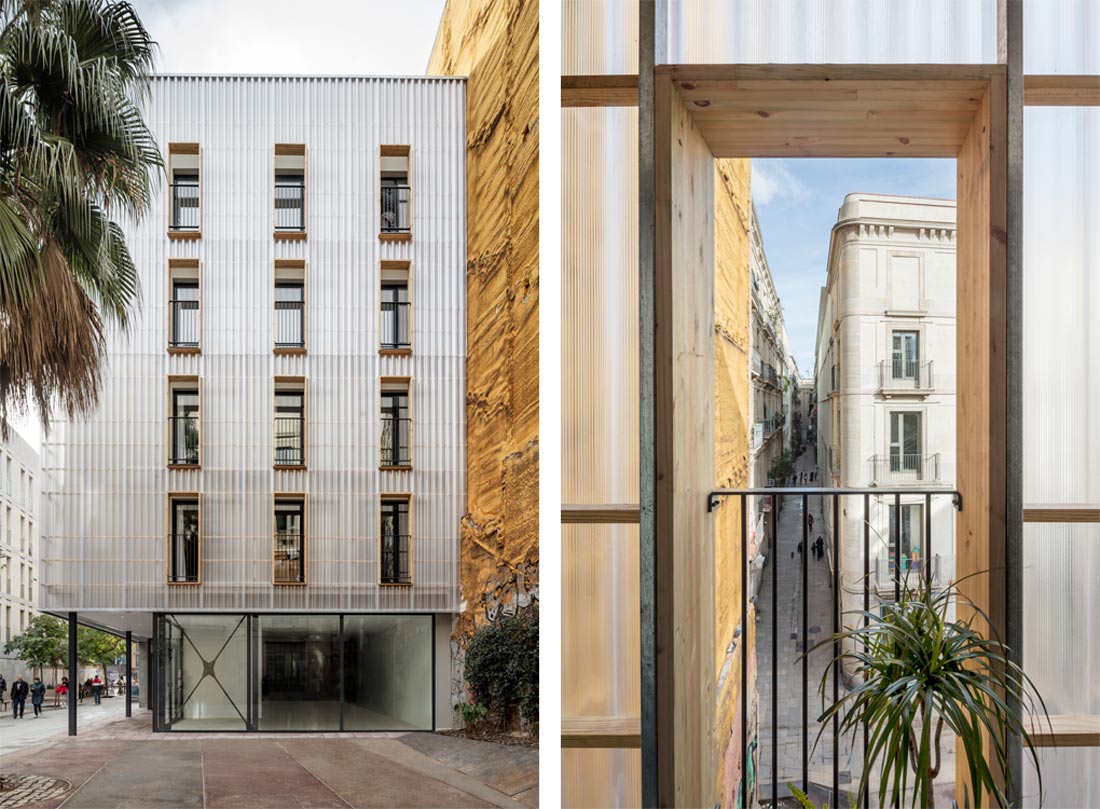 Around this compact volume, a translucent polycarbonate façade is projected that responds to the alignments of the plot. This second skin serves as a separator between the outside environment and the containers, with climatic, spatial and visual features. On the east façade, facing historic buildings, the openings in the polycarbonate skin adapt to the character of the neighborhood, with vertical balconies with wooden frames and metal railings that dialogue with the surrounding. 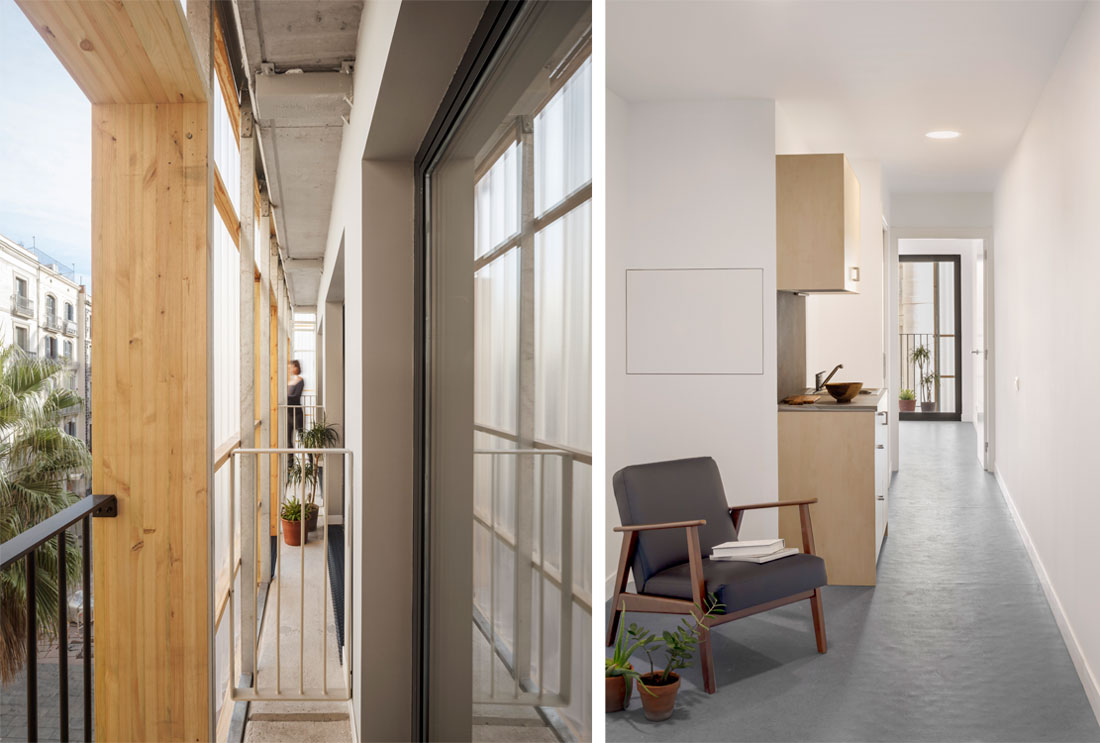 On the south façade the conditions are different, both in terms of the urban context and the orientation. The response comes in the form of larger openings, which maximize the entry of sunlight into the units. The openings on the first floor are extended toward the southwest for the same reason. The sunlight is modulated by simple wooden blinds, such as the ones on most of the neighboring balconies in Ciutat Vella. 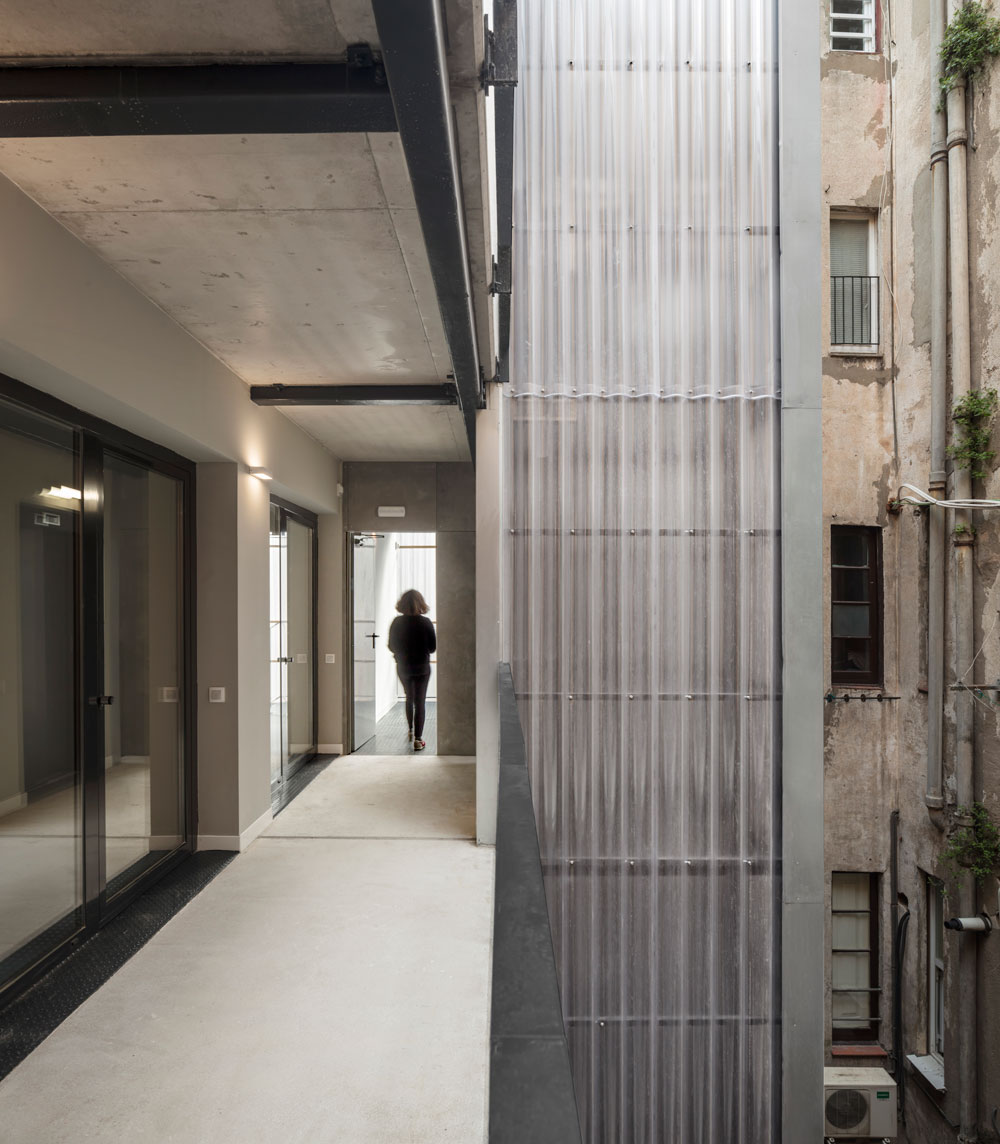 The translucent skin has some interesting effects of brightness, shadows and reflections of the sky and the colors of neighboring buildings, while allowing the passersby to perceive the life inside without sacrificing the privacy of the inhabitants. At night, it becomes a subtle focus of light for this area of the neighborhood. 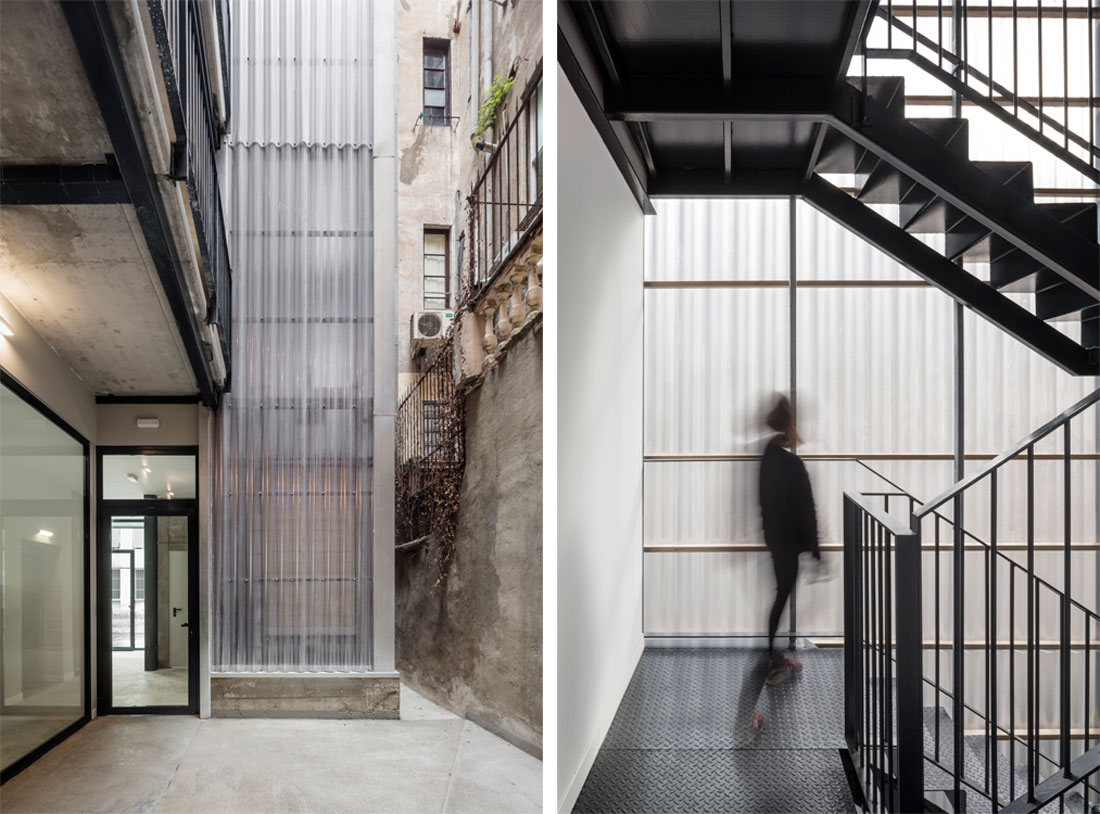 The circulation core is strategically placed next to the party wall, providing a convenient interaction with the neighboring building and guaranteeing access to all units through gateways that are large enough to allow other uses besides transit. The translucency of the polycarbonate skin also generates a pleasant image in front of the staircase, making the outline of the stairs and the people going up and down visible from the street.

The building has a partial setback on the ground floor, which generates an entrance porch. This floor is reserved for community and service uses for the neighborhood. Therefore, a wide open, flexible and transparent space is created with direct access to the square and the interior courtyard that can house different uses.

This building is an example that shows prefabrication, modularity, speed and innovation do not have to be in conflict with a careful architecture, which responds to real social needs and problems, while integrating a new volume into the urban fabric in a beneficial dialog between new elements and the existing context.

Straddle3 and Eulia are part of the ATRI team.