Alfriston School is a state-funded girls’ school with Academy status, catering for secondary-age day and boarding for a wide range of special educational needs and disabilities between the ages of 11 and 18.

The school has day places for up to 120 pupils and provides residential care for 20 of those pupils. Most pupils have moderate learning difficulties, and a large majority have additional needs, such as speech, language and communication difficulties, sensory impairment, or physical difficulties. The school serves the whole county of Buckinghamshire and a number of neighbouring local authorities. It became a Specialist Sports College in September 2009 with science as a second speciality subject.

Morris+Company was commissioned in January 2008 following an invited tender and interview process to replace an existing redundant swimming pool structure with a new up-to-date facility. 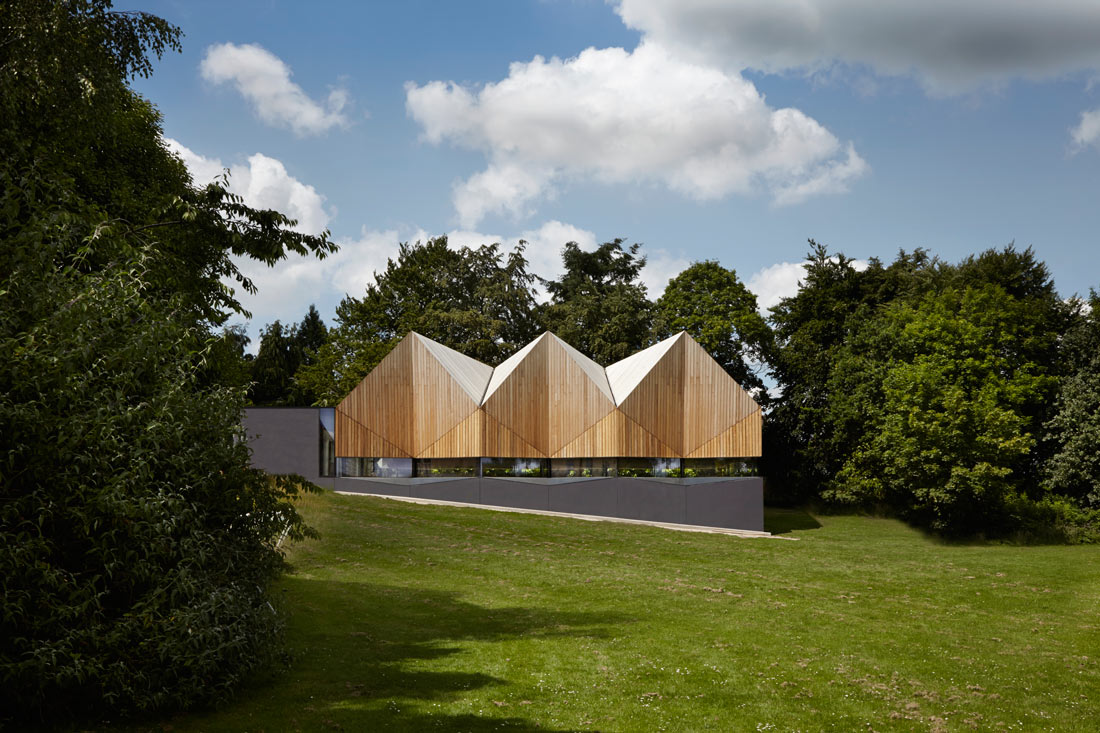 At the time of the commission, the current sports department consisted of a derelict swimming pool, gymnasium and changing area. The vision developed in conjunction with the school steering committee evolved to improve the provision entirely and potentially open the swimming pool to the public. A number of funding streams were targeted, including private fund-raising, Sport England and Local Government. A masterplan was prepared by Morris+Company to suit a phased programme of release of finances consisting of a new pool structure, refurbished gymnasium, new enlarged changing facilities, staff offices and a fitness suite. 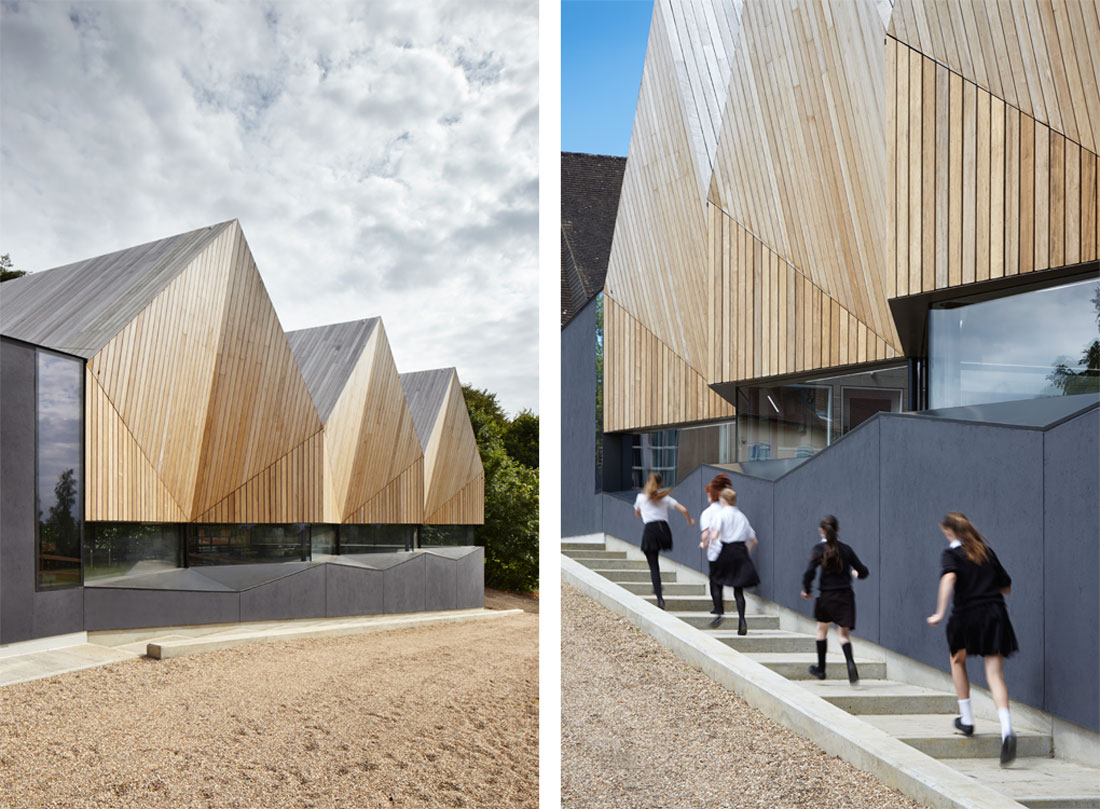 The entire project was split over two phases, with a small extension to the gym completed in 2010 followed by the main pool extension thereafter commenced in 2013 – the subject of this document. Planning permission was obtained in November 2009. The project was completed in June 2014 following a 50-week construction programme.

Alfriston School is located in Beaconsfield, Buckinghamshire, in the South of England, situated 1 km north of New Beaconsfield town centre, which is approximately 25 km outside of central London.

The school sits on the edge of an established suburban area of residential houses adjacent to open countryside. The school is accessed from Penn Road on the west side and is bordered by a greenbelt of open land, which is delineated by the playing fields. The site is well screened with mature trees and woodland to many of its boundaries, rendering it almost secluded from wider views. 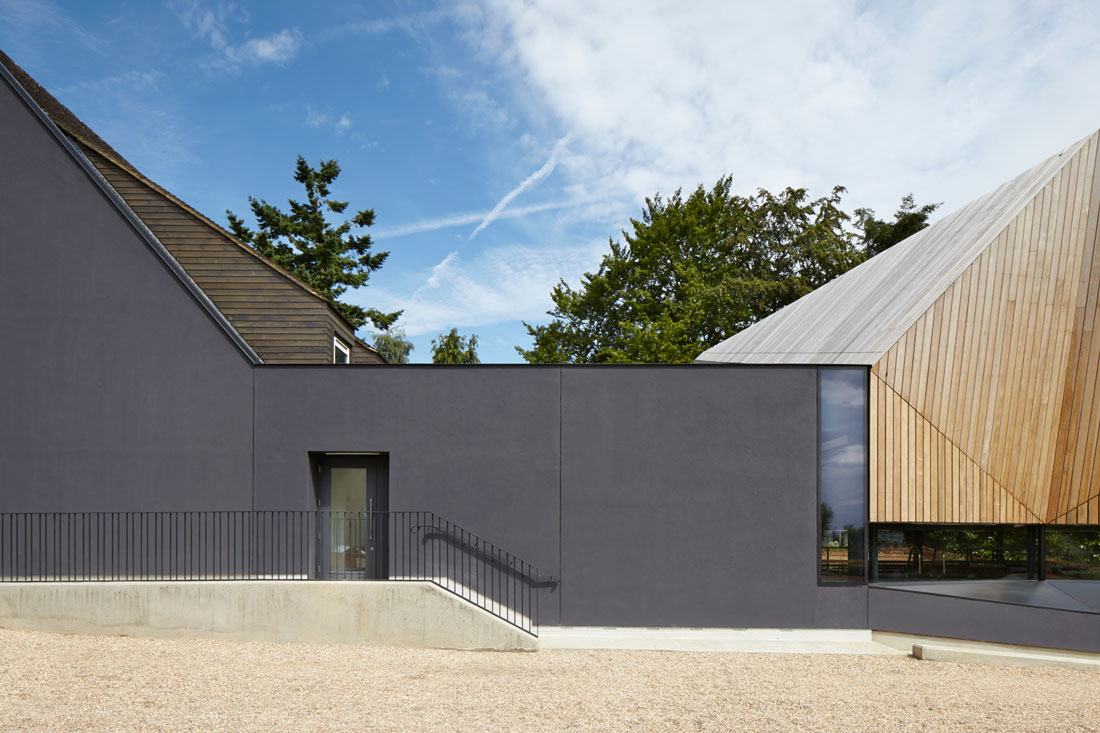 The existing school building is traditional in form. A central pitched spine runs west-east with pitched roof extrusions extending northwards and southwards accommodating classrooms, dining hall and offices. Additional buildings contained within the cluster consist of a combination of ancillary and break out classrooms. The buildings are generally one to two storeys in height and are built of brick, render and clay tile. Various extensions and buildings have been added over the years, including the existing gym building, which is the subject site, located centrally on the north side close to the site boundary. 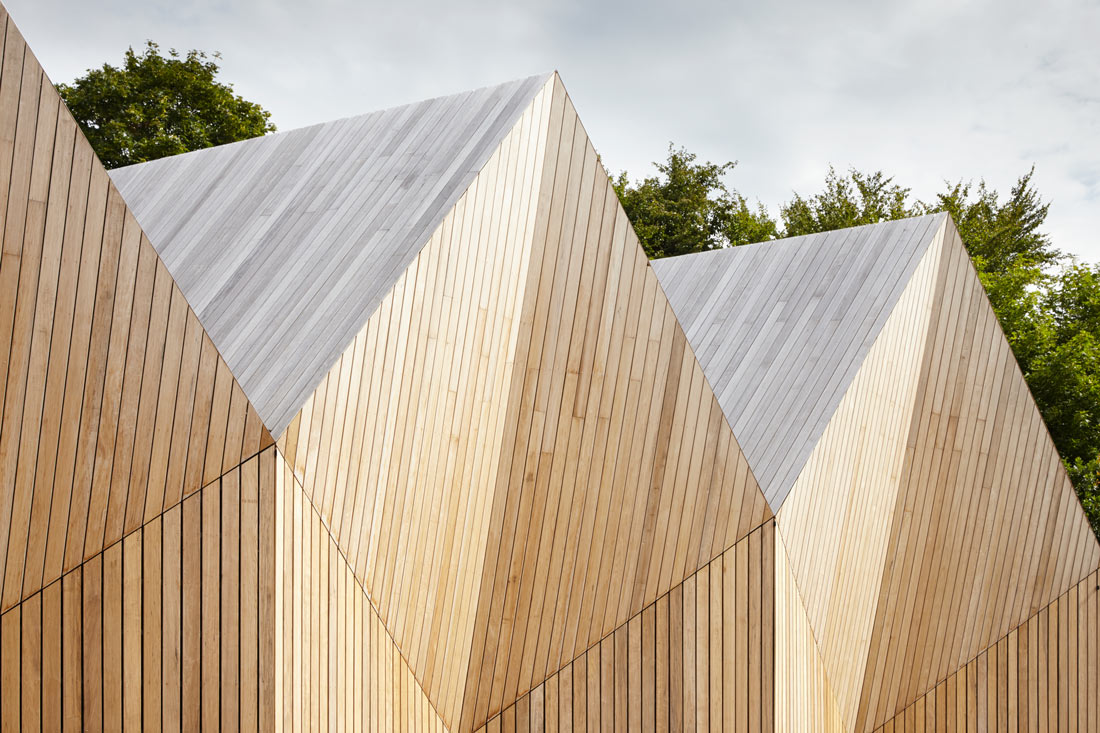 The scheme consolidates the existing and new sports facilities into a fully integrated sports department defined by one singular block containing gym, changing facilities, fitness suite, admin offices and swimming pool. A new changing facility is connected onto the side of the existing gym, with the pool extending into the landscape beyond.

The site levels have been altered to bring the primary entrance to the sports department central to the pool and gym with a secondary entrance to the rear of the gym, permitting a public and private entrance to suit out-of-hours use. The new arrangement caters for 24 pupils within the pool at any one time and a further 24 in the gym building.

Wide access ways and large storage areas are included to service varying disabilities and hoist equipment. The overall permissible build footprint within the defined area was compressed by the greenbelt to the south, skirting around the playing fields and the protected trees to the north. 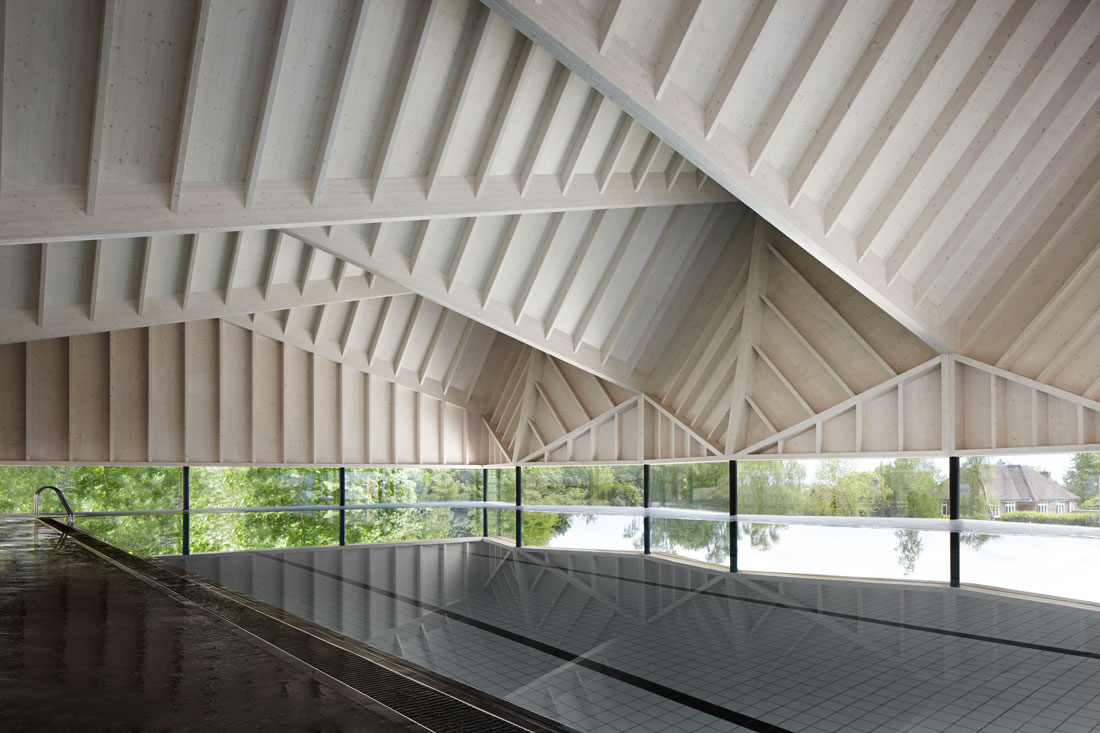 The new pool building sits discreetly at the rear of the site, facing directly onto the greenbelt land. Intended to be a contemporary expression of the local pitched roof vernacular, but executed with subtlety, the design of the new pool enclosure envisages a raised timber structure, articulated by three repeated folded roof segments.

The roof creates a dramatic internal landscape viewed from within the pool and also serves as an acoustic baffle, thus preventing a high reverberation of sound, which is a crucial aspect of the brief. A 1 m narrow glass strip around the edge of the building separates the pool roof from the rest of the base, reinforcing the apparent floating form. Thus, the privacy of pool users is protected and the panoramic view preserved. 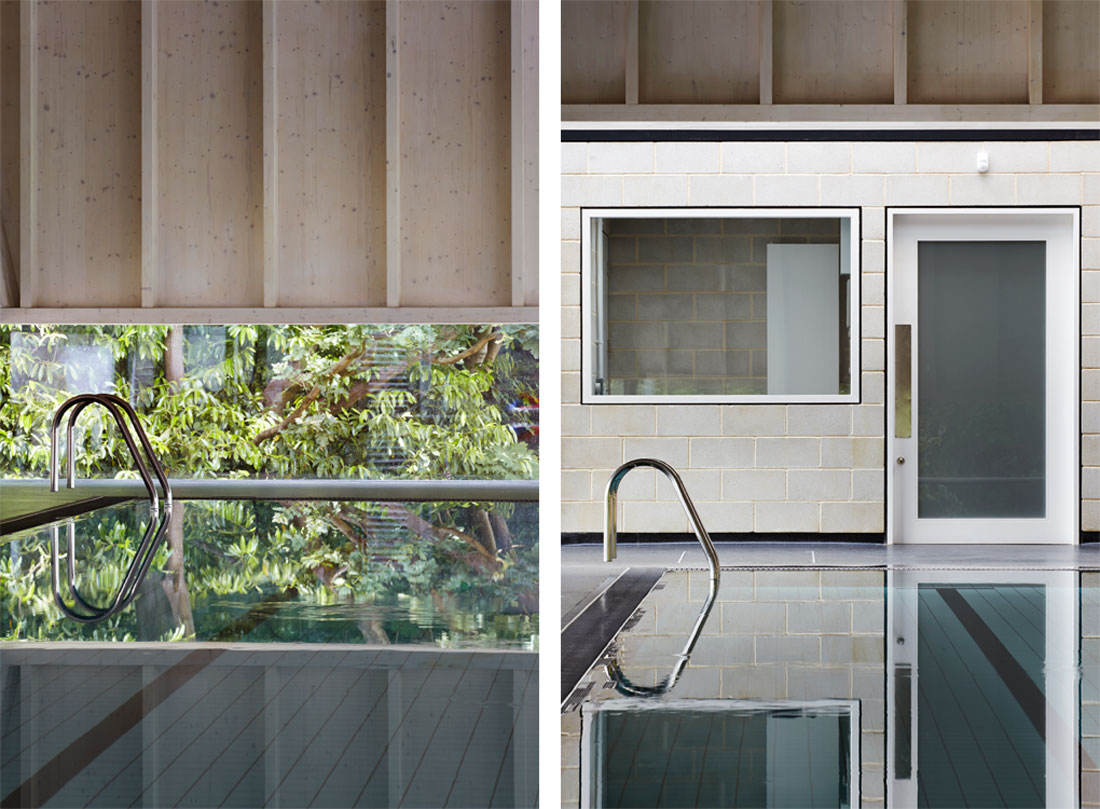 Due to the very steep level changes from east-west and north-south, a heavy concrete retaining base structure was necessary. The substructure and pool container is constructed using on-site traditional assembly methods consisting of concrete strip footings and retaining walls, a poured concrete pool container, and displacement tank. The pool is designed as a level deck pool, i.e., the water is level with the adjacent floor, with a simple flush drainage floor perimeter channel and beech tile.

The prefabricated roof was manufactured off site (by Cowley Timber) in 12 triangulated truss modules, the largest being 15 m long x 5.2 m high. The trusses were delivered with a weather-tight membrane ready for roof dressing. The interior face is factory finished. The entire assembly took place over a four-week period. This method offered precise, high-quality finishing with no requirement for temporary internal or external scaffolding, as well as cost and programme benefits. A standing seam roof system with integrated cladding clips supports the roof timber allowing the entire pool roof to be clad in the same material, with precise spacing and alignment.

All rainwater pipes are external but hidden behind the timber rainscreen. The pool roof is raised off the concrete deck with slim circular posts located at each cranked position. The glazed strip is achieved using a self-draining shuffle glazing system with minimal framing components. The cranked cills follow the geometry of the façades above and are powder-coated matt black. 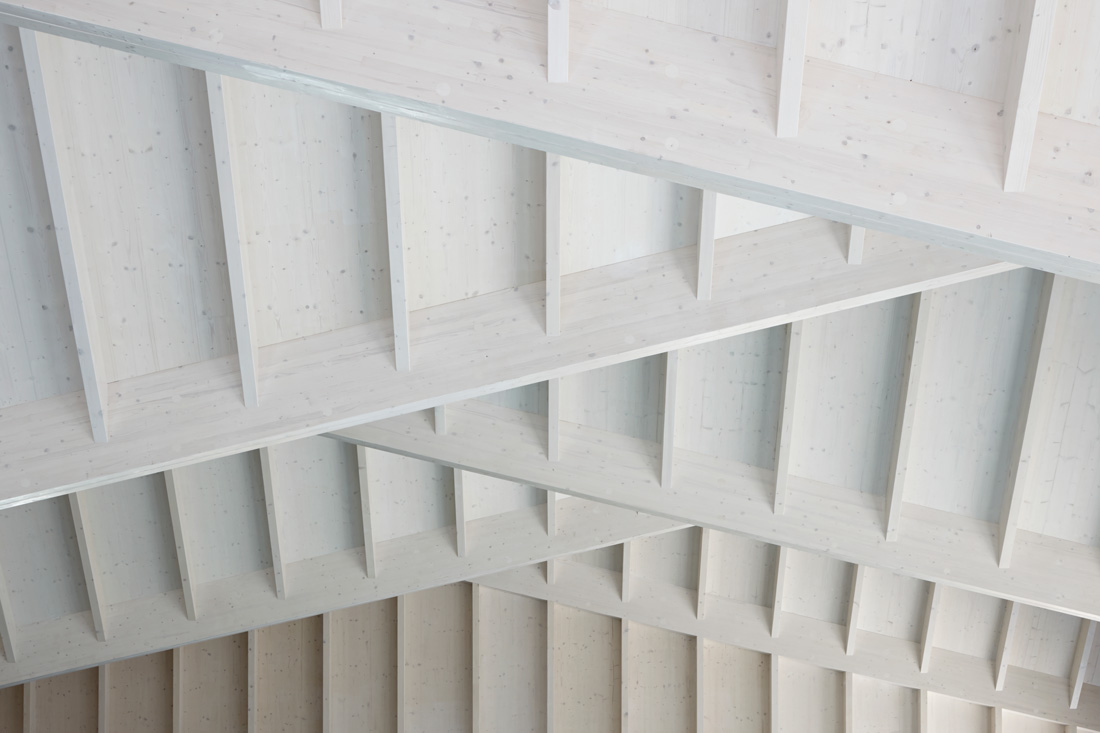 The existing building is cleaned up and, using colour, a simple reading of the volume is intended, so white windows and contrasting colours are eliminated. The façades are (re)rendered in black, along with the base of the pool support structure, to provide stark contrast to the Plato cladding.

The interior finishes palette is minimal with the majority of materials self-finished. The changing room timber structure is exposed, and walls are constructed of fair-faced concrete blocks. Tiling is used in the wet areas only, and a black sheet UPVC flooring is used throughout. Lighting is achieved using LED strips following the exposed lines of structure both in the changing and pool area. 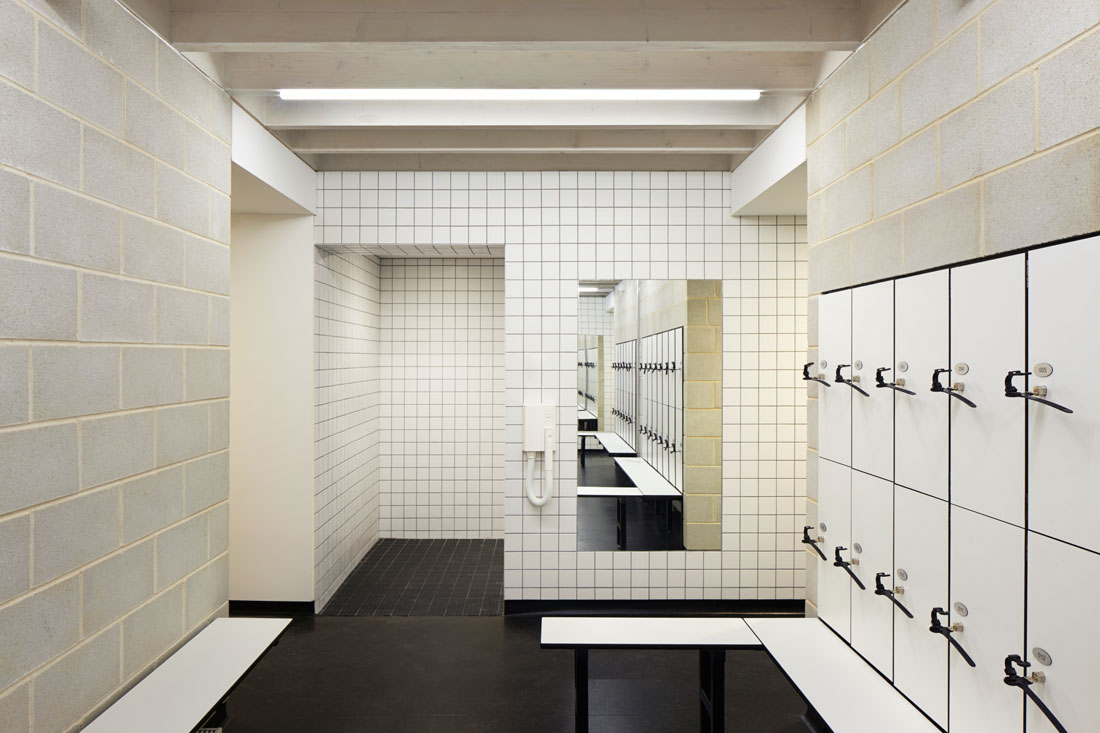 The project challenge was to provide a clear spanning structural solution that allowed maximum off-site pre-fabrication without the aesthetic compromise of appearing that it had been simply bolted together.

The ideal solution was to pre-fabricate 12no roof, 12no wall and 2no gable stressed skin panels constructed with primary glulam framing members and secondary glulam infill members, working compositely with a cross-laminated timber skin as an efficient engineered solution that could be achieved under factory-controlled conditions. An intensive design process was undertaken to achieve the complex geometric planes and iterative structural analysis.

The many planes of the structure surface were defined by the architectural intent, which provided an inherently stiff and stable structure when fully assembled but manifested in challenges of assembly, distribution, transportation and site handling due to the proportions of the roof panel sizes being a triangulated shape of circa 15 m long x 5.2 m wide and weighing 1.7 tonnes.

A major ambition was to conceal all traces of the galvanised metalwork and bolting, which was not only necessary to connect the off-site assembled primary glulam frame of the individual panels but also to connect the interfacing panels as they were assembled to each other on site. The sequence of build was an important consideration as was limited tolerance. Trial assemblies were a luxury that space could not afford, and so we were reliant on the accuracy of our 3D modelling and the CNC 5 axis router machine.

Reducing the amount of time required to attend to the fully installed panels was another important CDM consideration, and so close liaison with M&E service engineers to provide concealed but accessible service routes was vital, as was pre-finishing the timber surfaces with a three-part coating system before the panels arrived on site to provide both temporary and permanent protection. Mock-up sections were manufactured to assist in this process. The end result is an efficient, elegant and functional example of an off-site prefabricated, highly engineered stressed skin panel solution to create an open space. 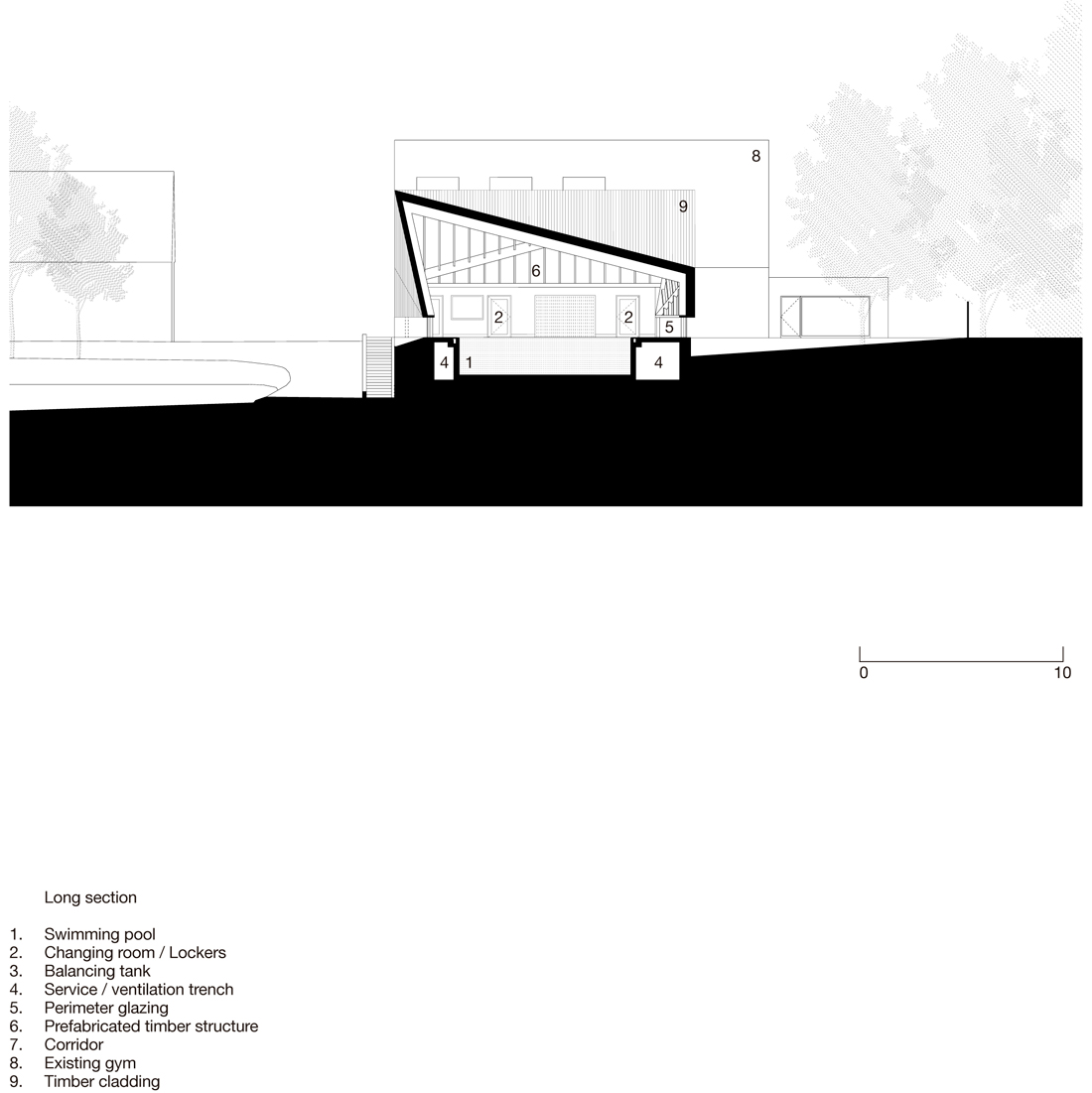