Al Janoub Stadium: A Temporary Overlay outside the Permanent Footprint

Inaugurated on 16 May 2019 by hosting the Amir Cup Final of the Qatar Stars national football league, Al Janoub Stadium was the first new stadium commissioned for the 2022 FIFA World Cup in Qatar. Zaha Hadid Architects (ZHA), together with Aecom, began designing the stadium along with its new precinct for the city in March 2013. As one of the venues for the Qatar World Cup, the stadium will host the group and quarter-final matches of the tournament. It is located in the city of Al Wakrah, 20 km south of Doha and connected to the capital via the Red Line of the new Doha Metro system.

The client’s brief was for a 40,000-seat football stadium for the 2022 World Cup, which could be reduced to a 20,000-seat capacity in its legacy mode following the tournament. 20,000 seats is the optimum capacity for legacy use as the home field for the Al Wakrah Sport Club professional football team of the Qatar Stars national league. These temporary seats have been designed to be disassembled and transported to a developing country in need of sporting infrastructure for post-tournament usage. Further temporary accommodation such as concessions are required for the additional capacity of FIFA World Cup tournament mode. This has been built as a temporary overlay outside the permanent footprint and enclosure of the stadium in its legacy mode. 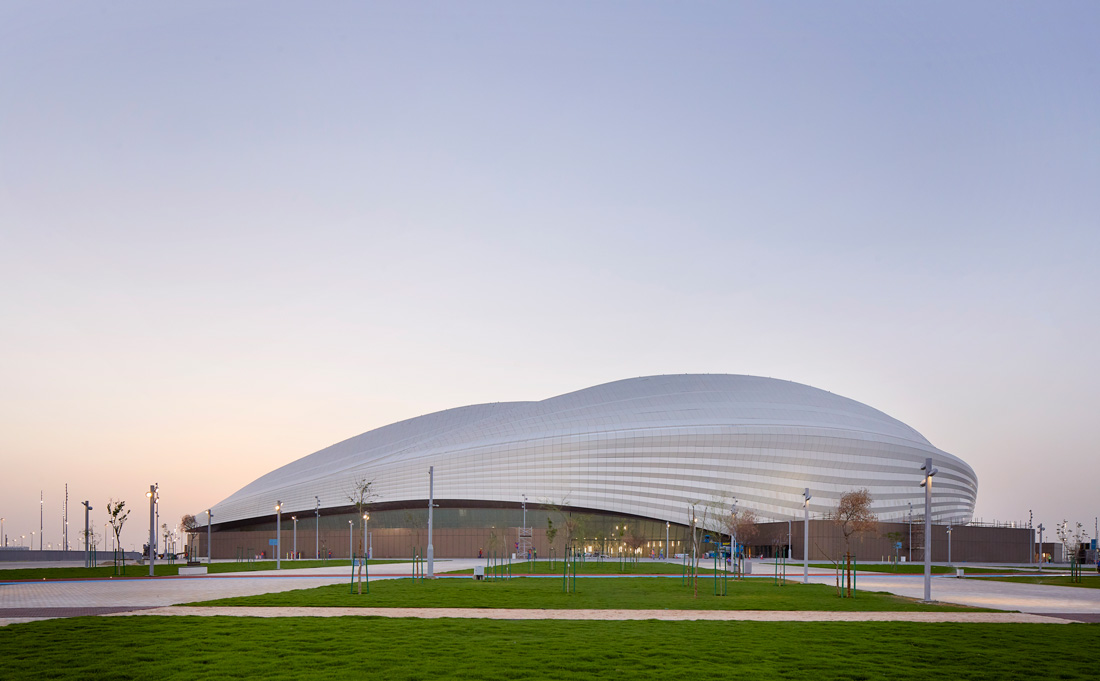 The stadium has an operable roof designed by Schlaich Bergermann Partner and a seating bowl cooling system that ensures the stadium can be used during Qatar’s summer months. The operable roof has been designed in sympathy with the cladding using pleated PTFE fabric and cables. When its deployed, the roof operates like a sail to cover the oculus above the field of play, creating a sheltered environment for football during the summer. Passive design principles along with computer modelling and wind tunnel tests were used to maximize the effectiveness of the physical enclosure to ensure player and spectator comfort. 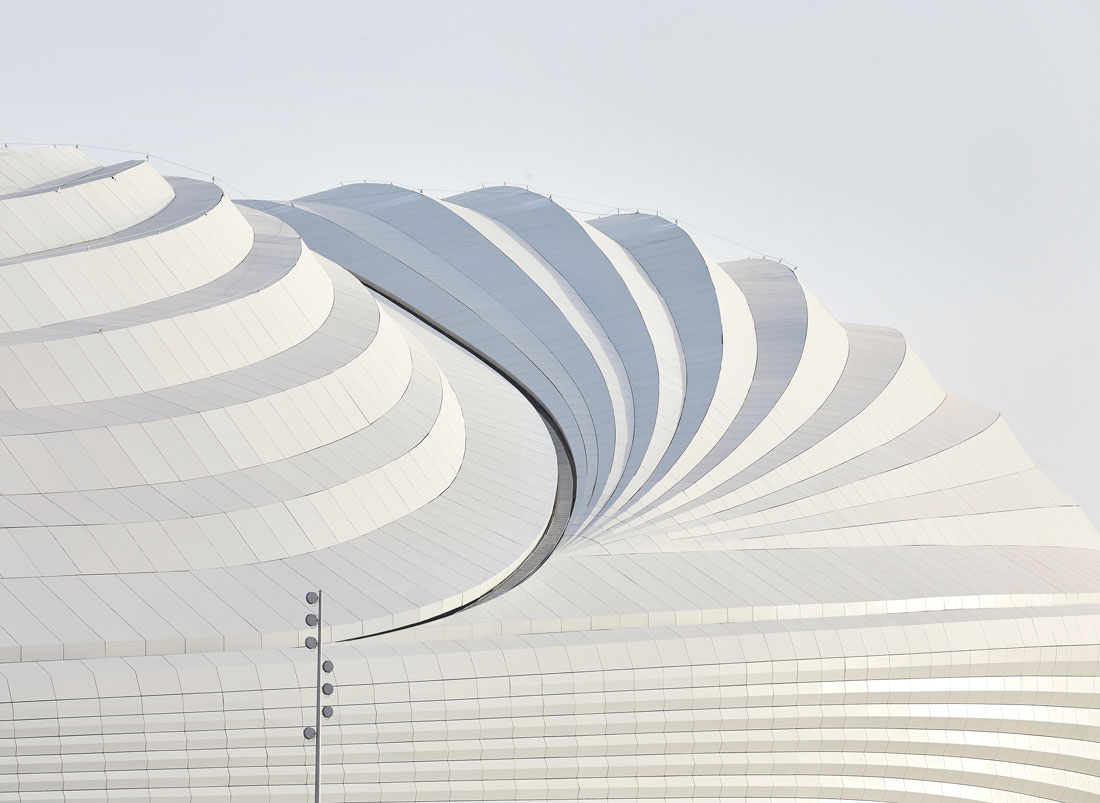 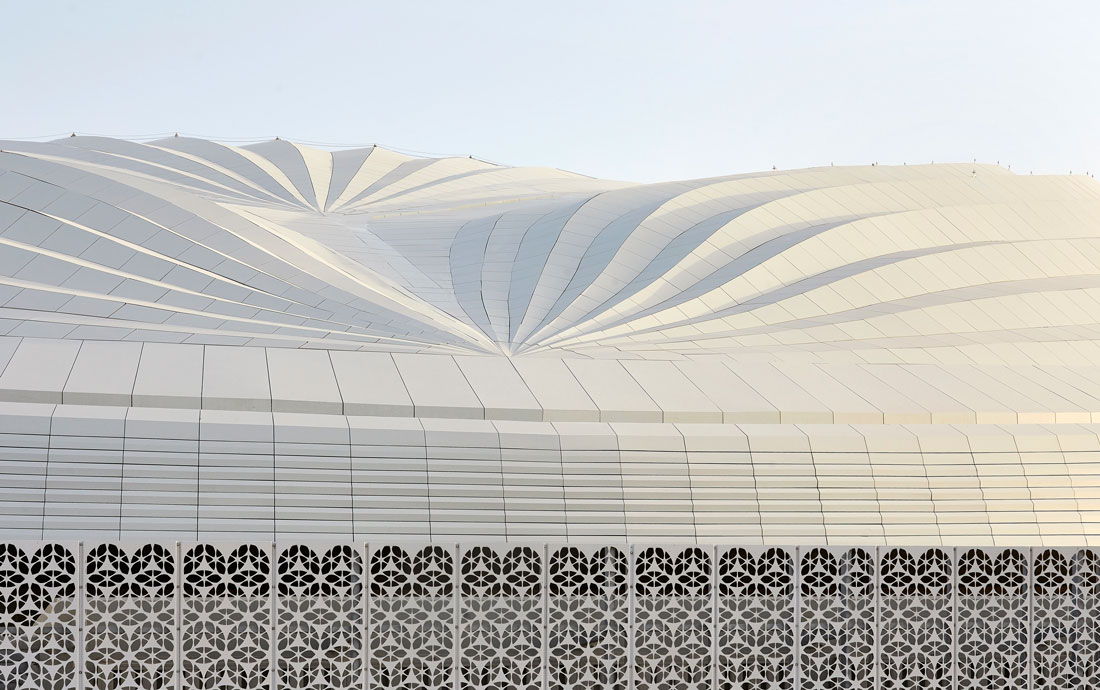 Given the stadium’s context within the coastal city of Al Wakrah, the client asked that its design reflect the maritime traditions and history of the location, in particular, the traditional boat of the region, the dhow. ZHA responded with a design that incorporates these cultural references in an abstract manner and combines them with practical responses to the climate, context and the functional requirements of a football stadium. The abstraction transforms the literal into something new and appropriate for a football stadium, allowing multiple interpretations of these cultural references both in terms of how they are applied and how they are read. 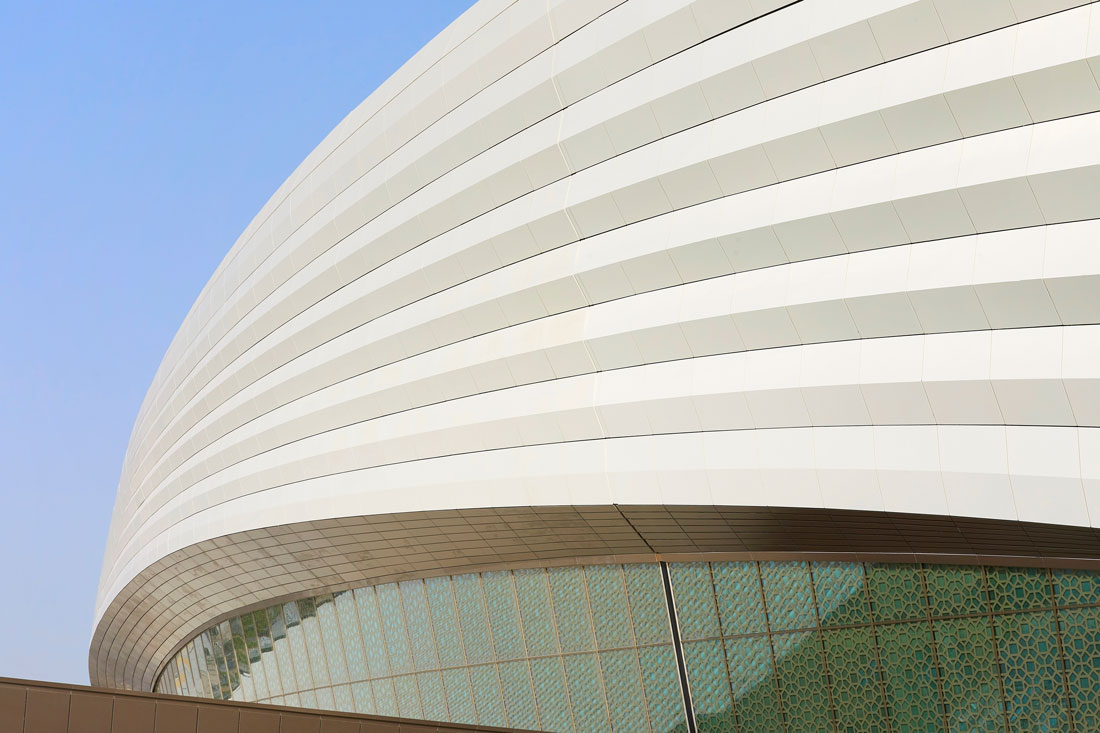 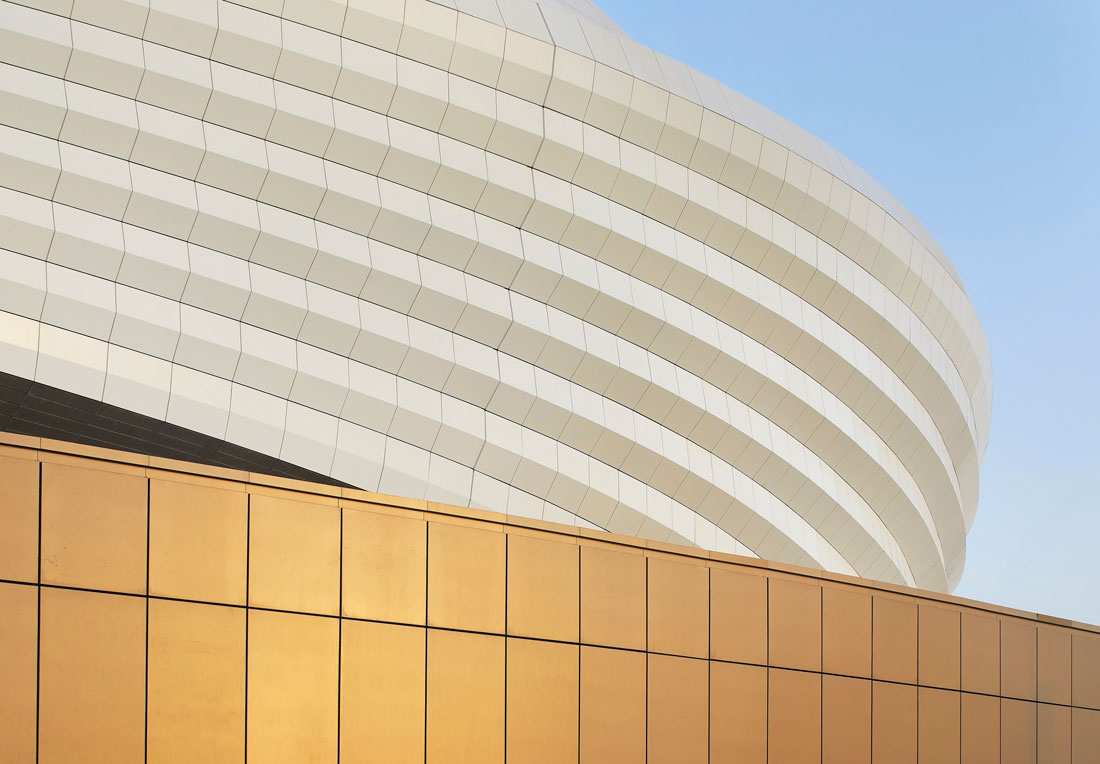 The stadium’s roof design is an abstraction of the hulls of dhows turned upside-down and huddled together to provide shade and shelter. This is expressed in the stadium’s envelope geometry, details and selected materiality, including the roof’s beam structure that echoes the interior structure of a dhow’s hull. The façades of the stadium are slanted outwards, tapered in elevation and reminiscent of the pleating of a dhow’s sails. The image of the dhow is further emphasized through the large overhang of the stadium’s eaves that incorporates strips of metal cladding reminiscent of the timber structures used in a dhow. 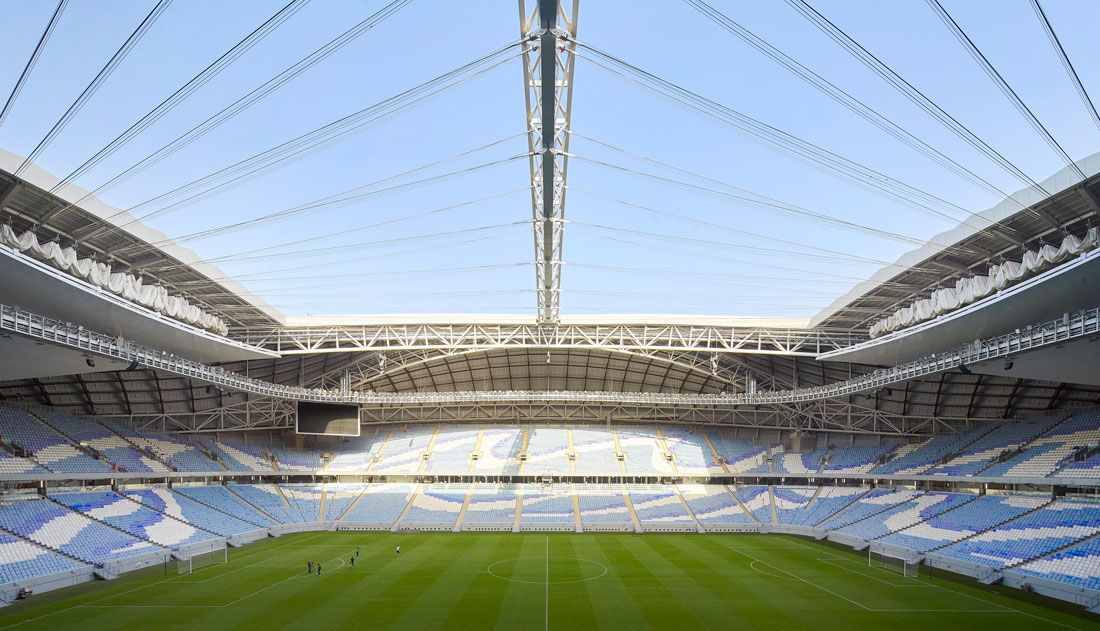 The stadium’s opaque roof and wall areas are expressed as pleated cross sections. This feature, which has its origins in Arabic motifs and calligraphy, adds texture to the outer shell and also emphasizes the stadium’s unique geometry. The external cladding materials are deliberately selected from a limited palette of materials and choice of colours: white for the roof and wall cladding, and darker colours for the areas below the eaves, including the lower-level curtain walling with its ornamental lattice screen print that provides shade. The colour scheme for the external building envelope dovetails with its geometric forms and reinforces the articulation of the outer skin. The roof cladding and opaque surface areas above the eaves are white or off-white in colour with a gloss surface finish that is reminiscent of seashells and emphasizes the pleats, which add texture to the building envelope. The embossed eaves and the lattice screen print of the glazed lower-level façades are metallic bronze in colour, adding a sense of richness and depth to the design. The choice of a bronze metallic finish for these worked surfaces pays homage to the traditions and artistry of Islamic craftsmanship. 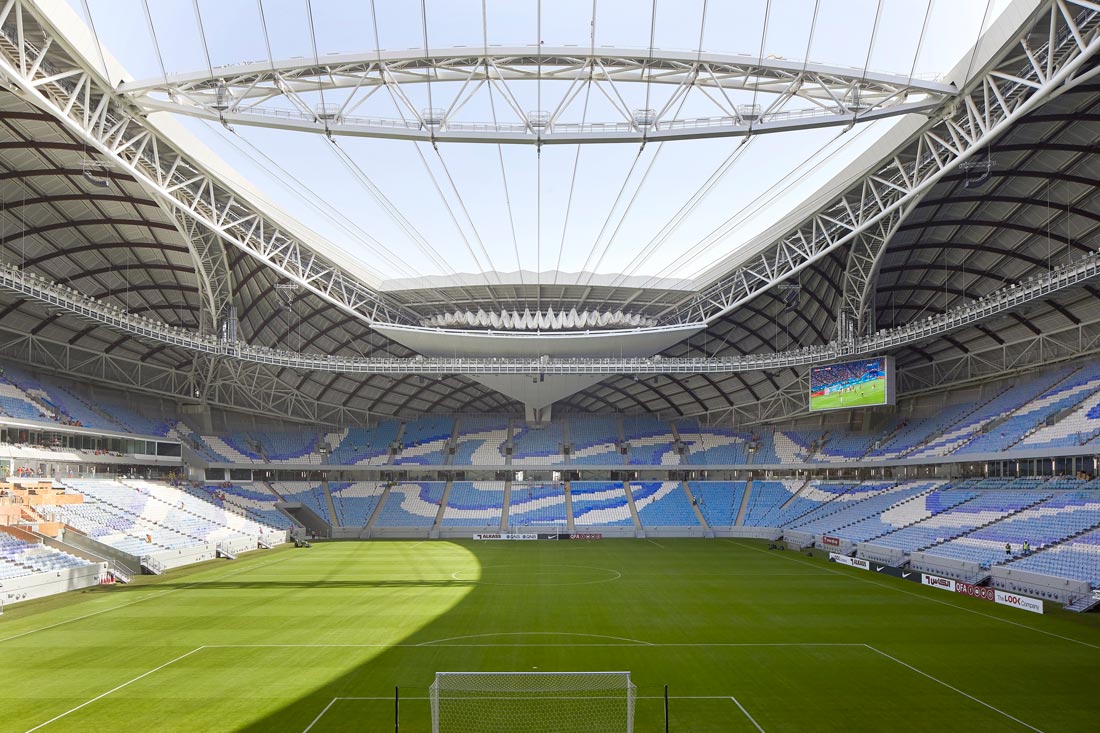 The stadium sits on a large landscaped podium that takes visitors from grade to the main entry-level concourse located at the middle of the seating bowl’s tiers. This podium connects the stadium to the adjacent landscape and reduces its scale. Large parabolic voids within the podium signify different activity zones. On the eastern side, voids allow for the majority of spectators to arrive and depart from the stadium. The northeastern void will include a community market, whilst the southeastern void hosts an activity park. To the west, the parabolic void within the podium allows for vehicle access and drop off at grade for the players, officials and dignitaries. 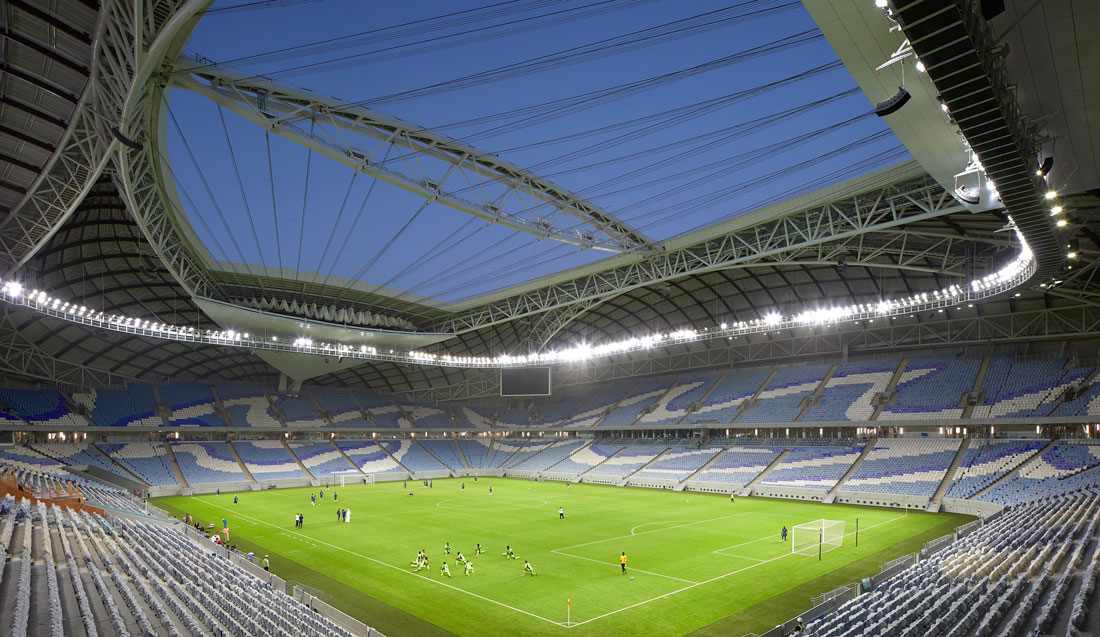 The stadium was designed in conjunction with a new precinct so that its sits at the heart of an urban extension of the city, creating community-based activities in and around the stadium on non-event days. Al Janoub stadium will be a memorable venue and destination during the Qatar 2022 FIFA World Cup and afterwards, at the centre of its Al Wakrah community. 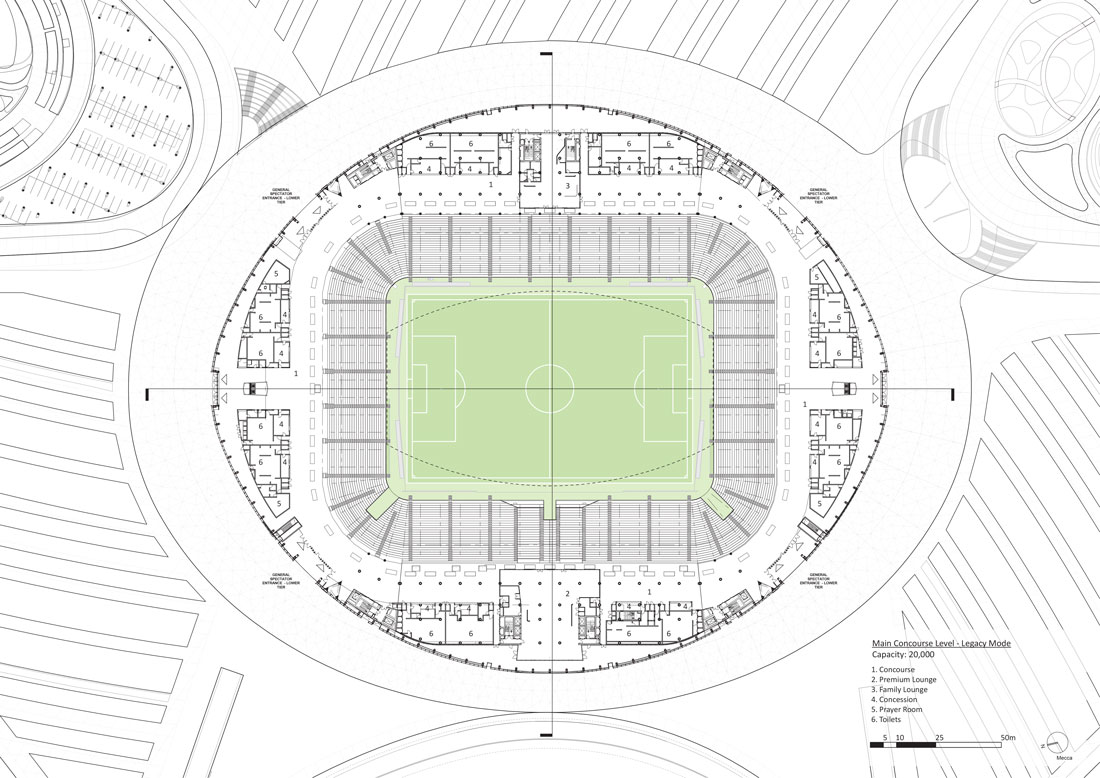 « Daring Cities: Nagano Prefecture
Matter & Materiality: Towards the Future of the Construction Industry »