1111 Lincoln Road: Much More than a Car Park

The mixed use development called 1111 Lincoln Road in Miami Beach comprises four different parcels. An existing building, the former Suntrust building, is renewed since the bank has left the building to be accommodated around the corner. A mixed use structure for parking, retail and a private residence becomes attached to the Suntrust building. A two-story building with the relocated bank on the ground floor and four residences on the upper floor faces Alton Road, with a landscaped alley and surface parking lot behind it. 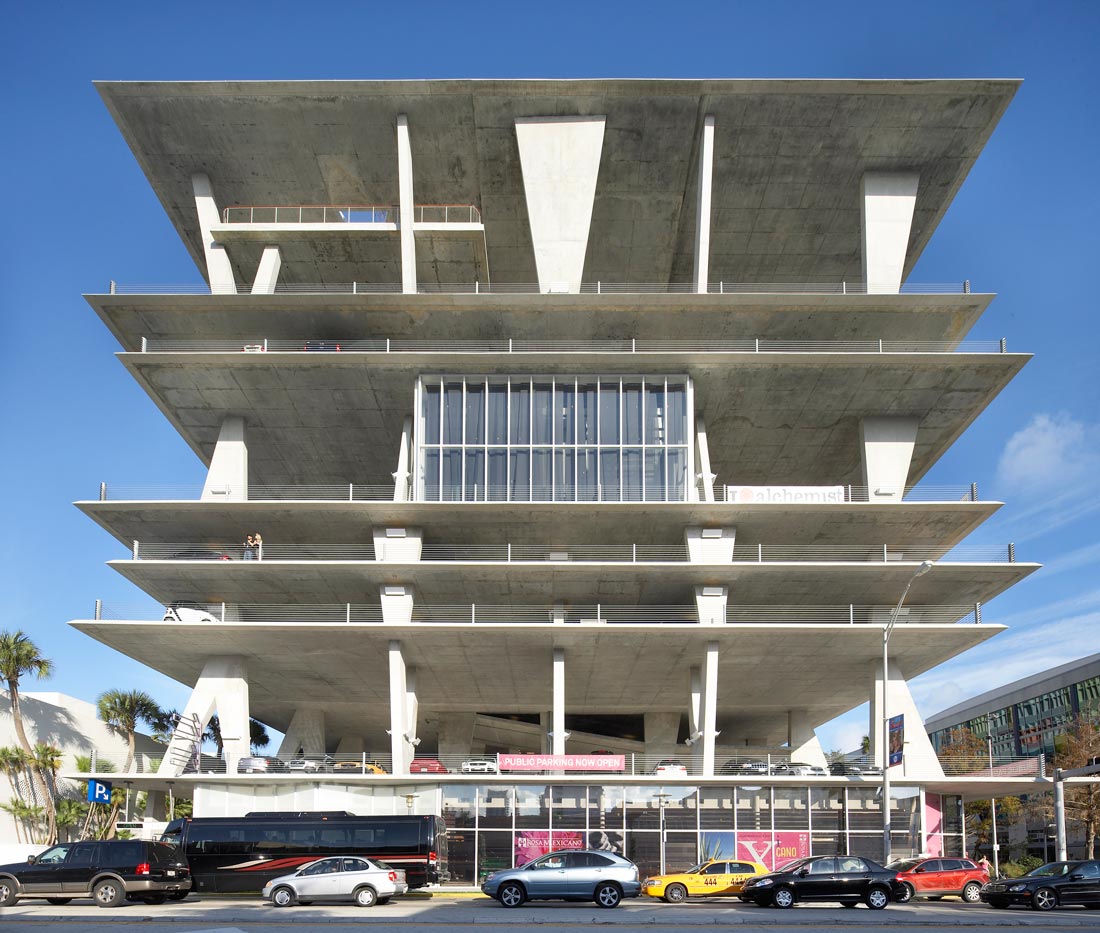 A car park is a public facility, like a train station or an airport, where people change from one mode of transportation to another. Lincoln Road Mall is a very alive, urban experience, a pedestrian shopping street where small-scale restaurants and bars serve their customers day and night, all year round, under lush trees and stars. 1111 is a new place for people to leave their cars so they can hang out on Lincoln Road Mall, go see a movie or have a swim in the ocean. To create another standard parking structure on a retail base, with a façade that hides the ugliness of what is being stored inside, and a recessed penthouse on top would not have answered the urban requirements of this place. Seeing the potential of the project, Miami Beach authorities courageously approved more height on this corner, but not more FAR. The additional height granted is used for higher ceilings, more air, panoramic views and better looks at the structure.

The nature of Lincoln Road was the one source of inspiration for the architecture of the car park, its being connected to the massive, closed Suntrust office building the other. The garage is a fully open concrete structure. Ceiling heights vary between standard parking height and double or even triple height, in order to accommodate other programs, permanently as well as temporarily. A retail unit and a private residence are located on the upper levels, and the structure can be used for parties, photo or film shoots, fashion shows, concerts or other social or commercial activities, offering amazing views as the backdrop for the stage. An unenclosed, sculptural stair in the centre of the building makes pedestrian circulation in the garage a panoramic, ceremonial experience, as is moving through the building in a car. The private residence that is nested on a mezzanine of the top floor of the car park spills out to terraces; it is folded into the structure yet screened by excessive landscaping. The terraces also bridge across to the roof of the existing building. 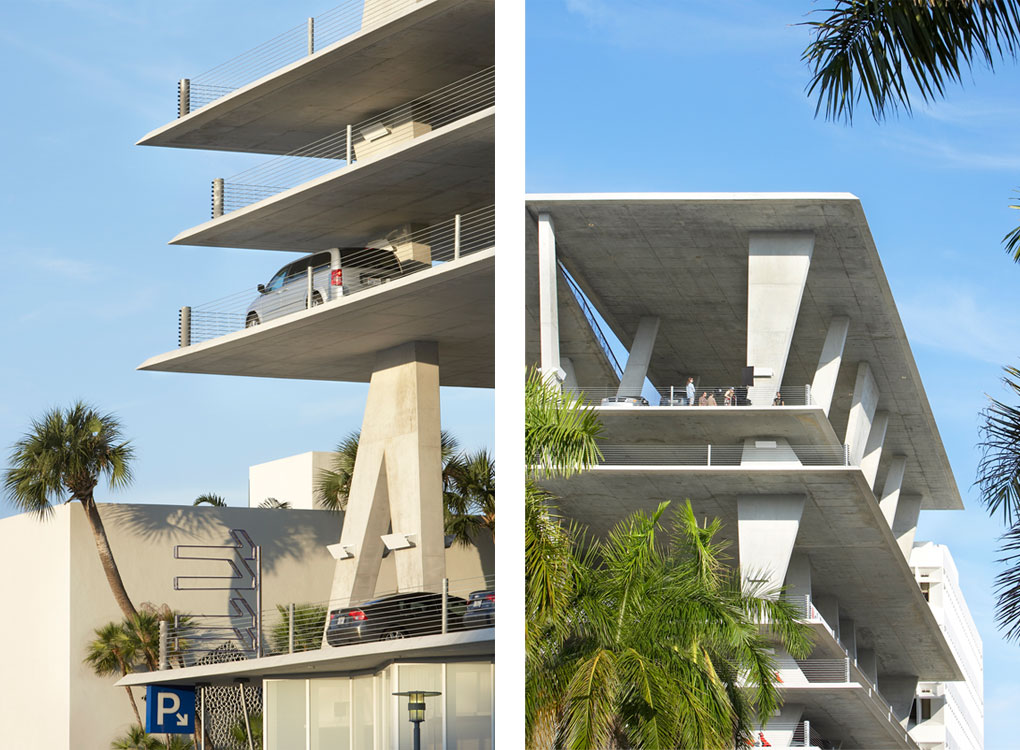 The structure is the architecture. The car park is an organism made up of a family of concrete slabs, deployed as floor plates, columns and ramps. The location and form of these elements result from a series of forces acting upon each other, a complex overlapping of site and building code requirements, combined with program choices and the aspiration to both integrate with Lincoln Road Mall and to formulate its beginning at the corner of Alton Road.

1111 includes the transformation of the massive Suntrust Bank building from the 1970s into a publicly accessible place. The lowest floor plate of the car park cuts away a large part of the ground floor of this building, creating a fully glazed, kinked storefront all along Lincoln Road. The new structure slips under and opens up the heavy concrete building for 16 tenants who bring new brands to Lincoln Road Mall, from Y3 to Osklen to Taschen to Nespresso, from clothes to books to coffee and so forth. A new entry and an open, lit staircase in one of the existing corner towers of the Suntrust building indicate the new rooftop restaurant, which offers exquisite views over the Art Deco District and the Miami Beach skyline alongside the Atlantic Ocean. 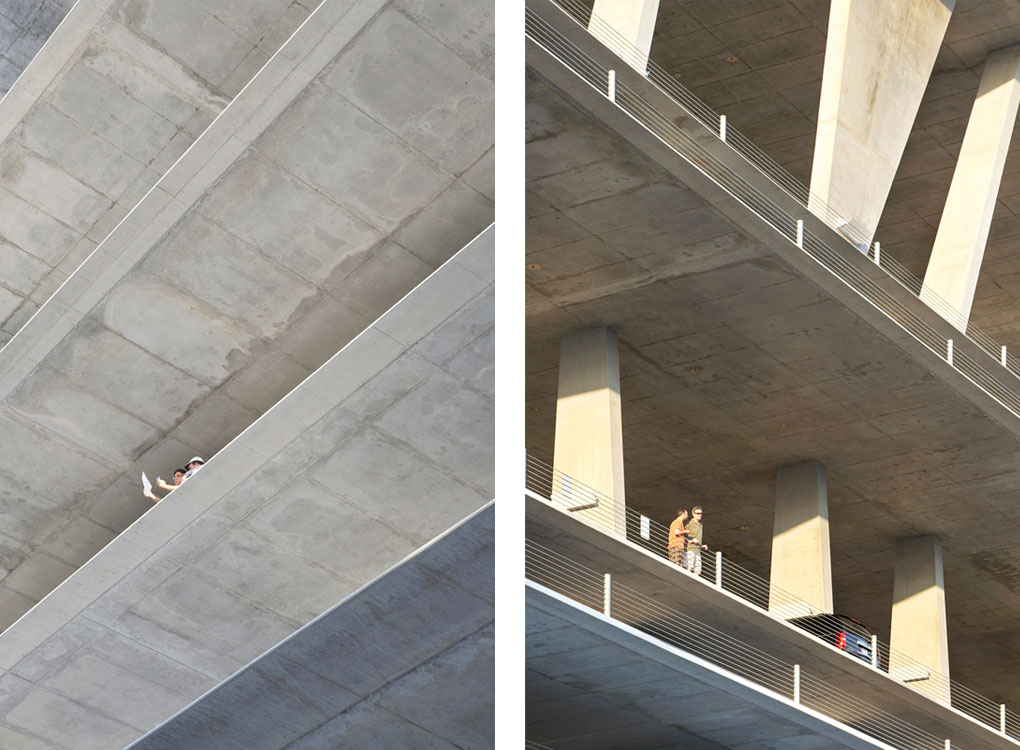 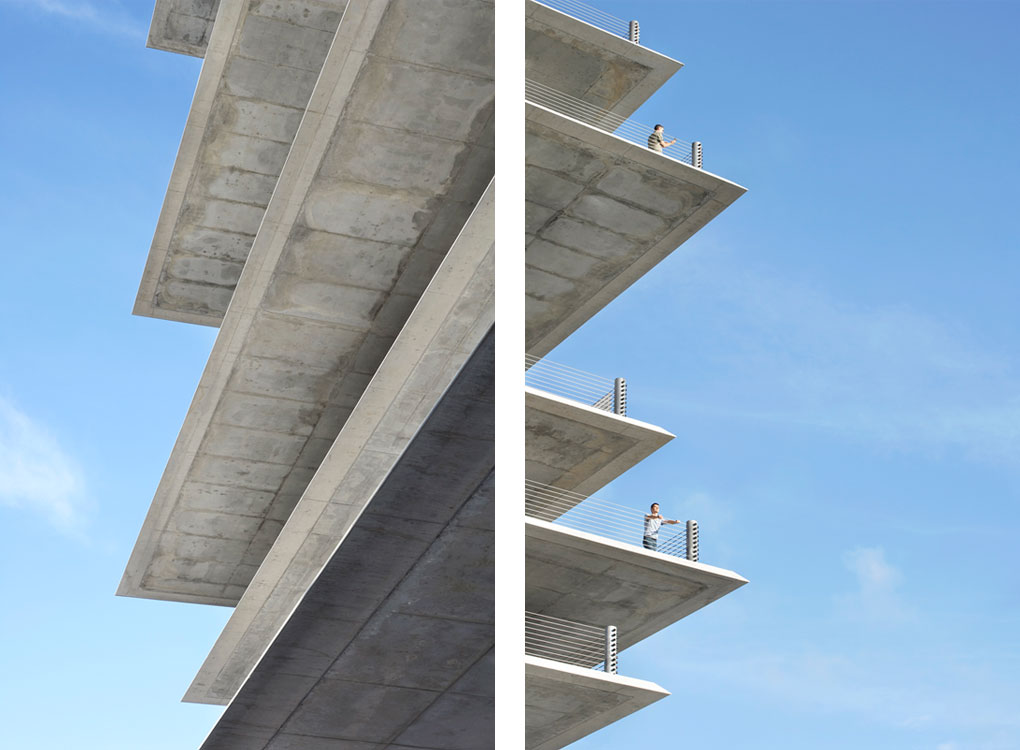 The new Suntrust Bank is a kind of “architecture with no architects”- it tries not to make an architectural statement towards Alton Road, next to the rather expressive car park. It is a two-story stucco building with the bank on the ground floor and four identical, introverted houses on the upper floor. As the site has no views to offer, the scenery for the apartments is created by two carefully landscaped courtyards, and the façade expresses nothing more than the stairs behind a white ornamental lattice.

Finally, Lincoln Road Mall itself has been redesigned between 1111 and the cinema across the street. Before the transformation, this last block was still open for automobile traffic. The full width of the street is paved in black and white stripes of natural stone, from façade to façade, creating a generous common plaza with groups of trees of substantial age and size. Restaurants are limited in number in order to keep a large area of “commerce free” public space – instead of chairs and tables there are benches and water features inviting visitors to sit down and relax. A glass pavilion by Dan Graham raises the status of the plaza to yet another level. 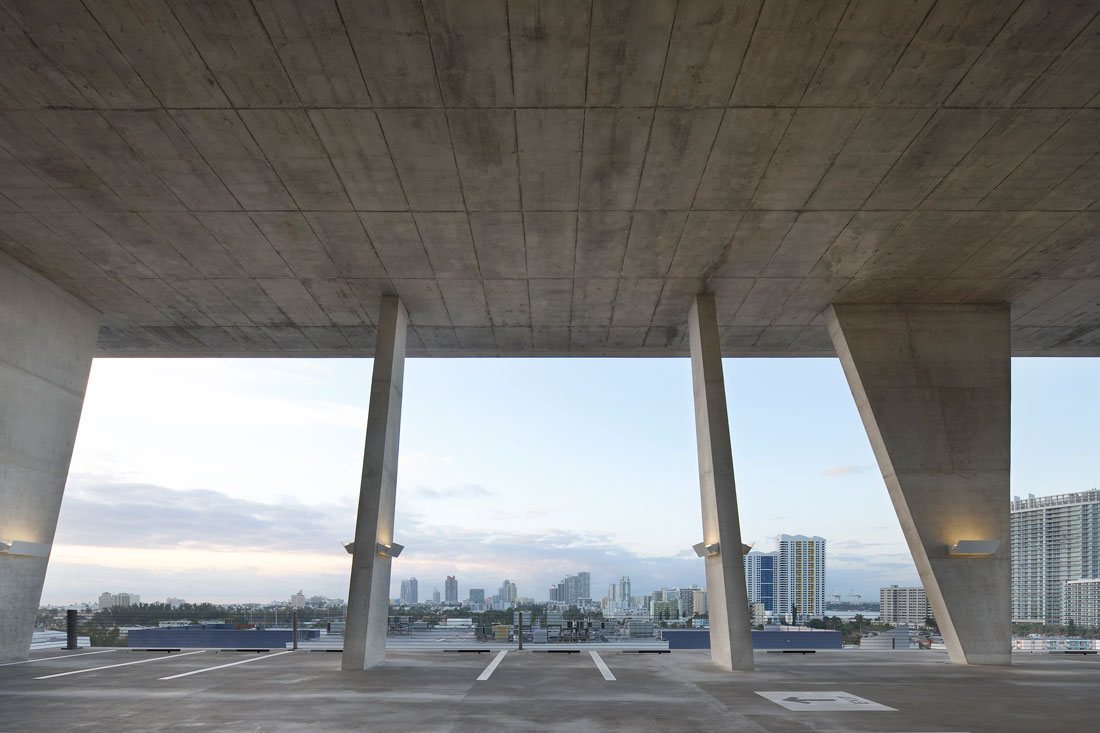 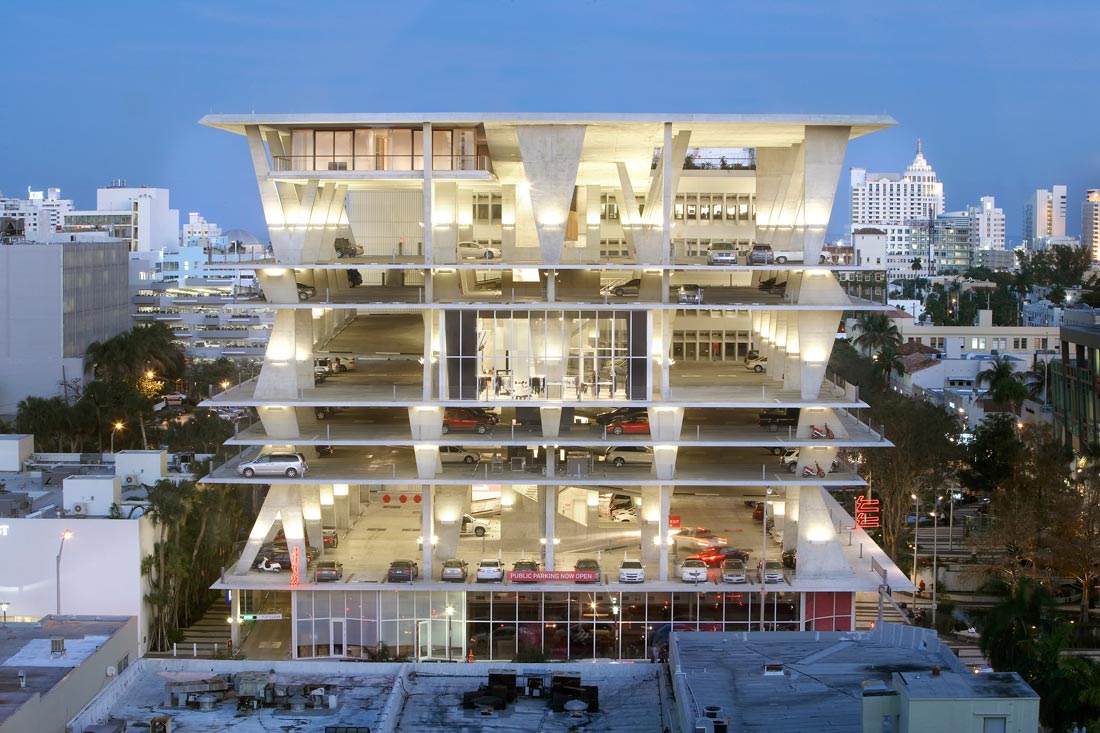