Situated on an active axis of collegiate life, Zephyr Pavilion , a windswept canopy, activates a shaded passage through the courtyard of the Honors Residence Hall at Texas Tech University in Lubbock, Texas. The new permanent architectural structure defines a social anchor in the bustling campus community. An open courtyard becomes a nexus for the merging of innumerable paths. Zephyr elevates a daily stroll into an experiential motion through an urban passage. The rise and fall of the form is influenced by the various traffic paths through the space. Arches curve out of the convergence of canted columns, and the quietly sophisticated body opens new views onto the campus architecture and to the sky above. The structure provides a space to meet with fellow students, to study while enjoying a coffee, or to simply stroll through on the way to class. 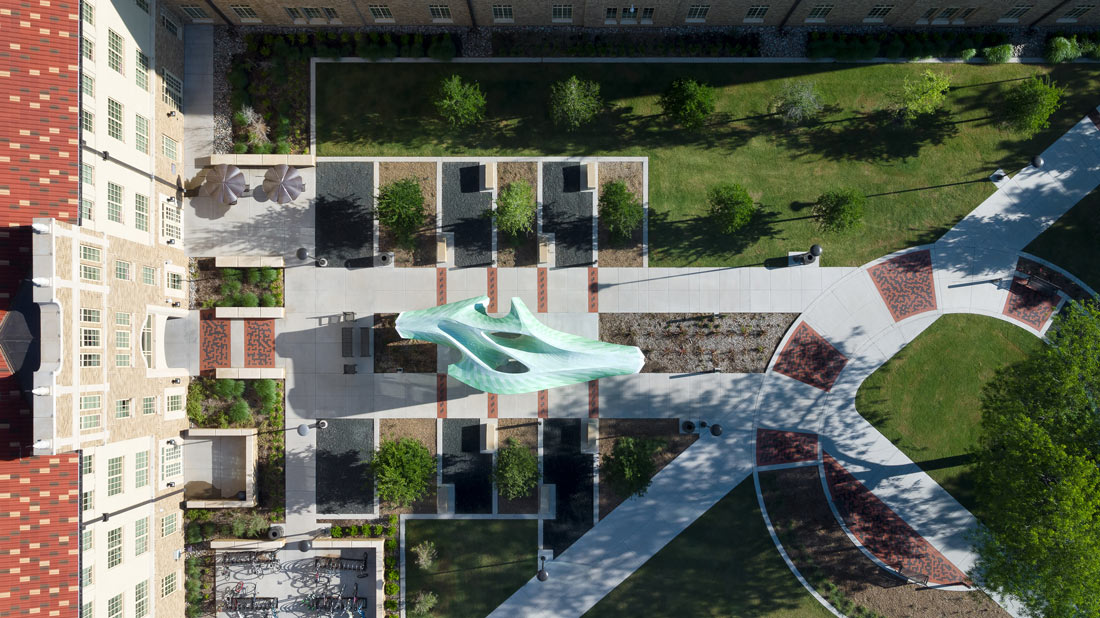 Progressive Assembly (ground up, puzzle up)

Zephyr relies on the hallmark construction process of THEVERYMANY: Progressive Assembly . Each structure, broken down to its component parts, is a series of inter-reliant structural stripes. At this base unit of the stripe, computationally derived patterns are fully ingrained into the coloration, form, and integrity of the resulting structure. The unique conditions at Texas Tech produced a form composed of tightly coiled, angled stripes. Controlled folds produce tangential continuity of the curvature, which generates gentle movements broadly across the angular underlying geometry. As a progressive assembly, each part fits into the position of the last and builds up without any added molding. Structural aluminum stripes climb the intensive curvature of the column and open into surface condition, generating a complex canopy overhead. Progressive assembly requires a very precise sequence in construction: ground up, puzzled-up. Pre-assembly of larger blocks is not an option, since with every additional stripe the overall module becomes more rigid. With no given tolerances, large sections cannot be eased together. It would also require the re-introduction of heavy lifting equipment. Progressive connection of parts primes the overall form for the next piece. If a part is forced into place out of sequence, it will not work. Little by little, one part at a time, the work will come together. Consequently, timing has become a vital component of the assembly process as our primary driver for shaping a double-curved surface. 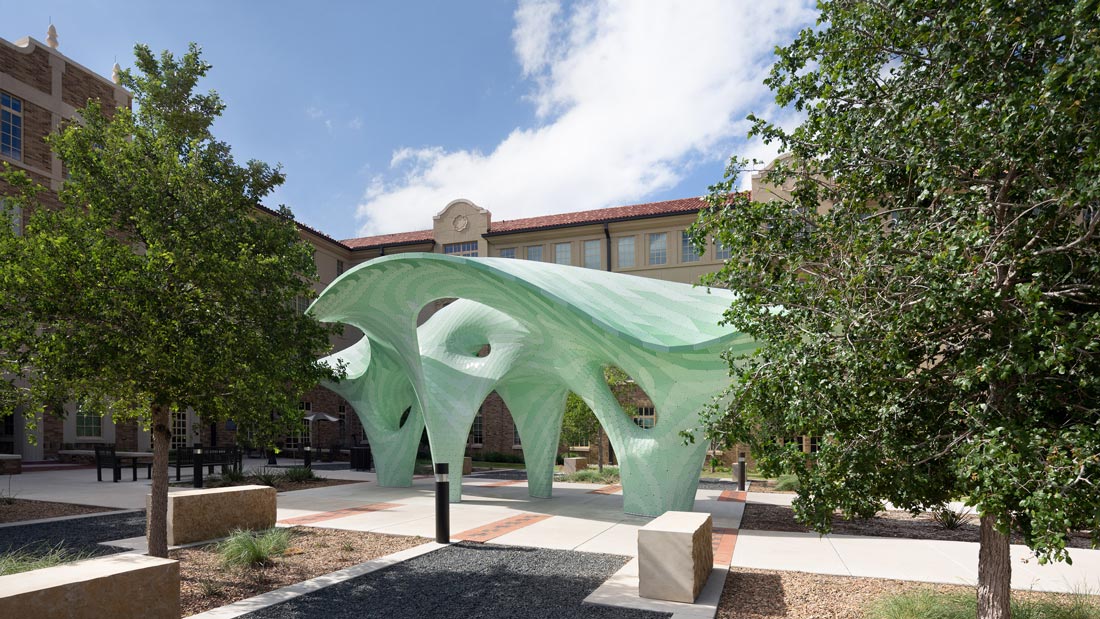 The studio initially invented computational protocols allowing linear stripes to describe a doubly curved, two-layered skin. The stripe system crystallized into a unified, efficient architectonic system. Sometimes, depending on the location and orientation of the system, an issue can arise in which an unwanted hierarchy is formed between the layers: one layer carries more downloads when the other mostly acts as a connector or unifier. In Zephyr, the system was diagonalized – rotated 45 degrees – in order for both layers to carry downloads and act as connectors simultaneously. With the stressors distributed equally, the layers can become optimized in terms of thickness. Material thickness is no longer solely based on dead loads and wind loads, and now responds to situational factors like point load and potential for vandalism.

In Zephyr, the cross-directional patterning of structural stripes allows the formation of a span and height without any thickening, internal structure or temporary scaffolding. 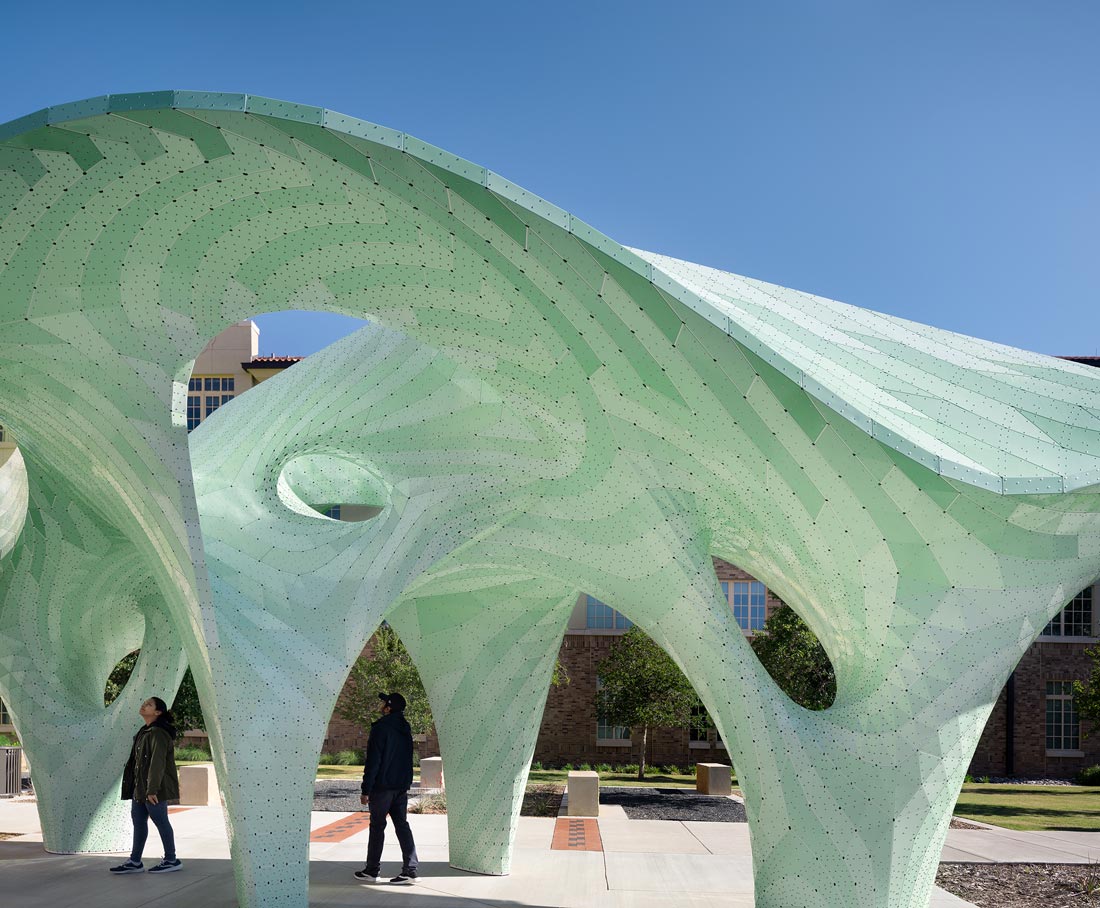 Zephyr is a form partially reliant on physics-based principles and highly curated geometrical moves to drive its design. In design research across the last 30 projects, the studio’s principle of Structural Stripes has reached a temporary apex in defining optimum thickness. Structure is no longer the main driver for this optimization. The extended series of built experiments in ultra-thin structural geometry has propelled a return to form as composition. The work is opening itself to new formal moves that would not have been structurally optimal if based on the quest for structure alone. Open looped columns, funneled bridges, a bisecting creased spine and streamlined locked edges define the beginning of a repertoire of structural typologies that produce the intensive curvature on Zephyr Pavilion. At this level of compressed striping, the skin is able to carry more loads, making it possible for the first time to produce self-supporting cantilevers. Zephyr’s projecting wings are held aloft solely by the layering and subtle folds of its structural skin, as a cantilever-shell, which is neither the typical compressive shell structure loaded at its edges nor the typical beam cantilever. The resulting space complicates the understanding of interior and exterior when the enclosure finally reveals itself as totally hollow from the projected ends. 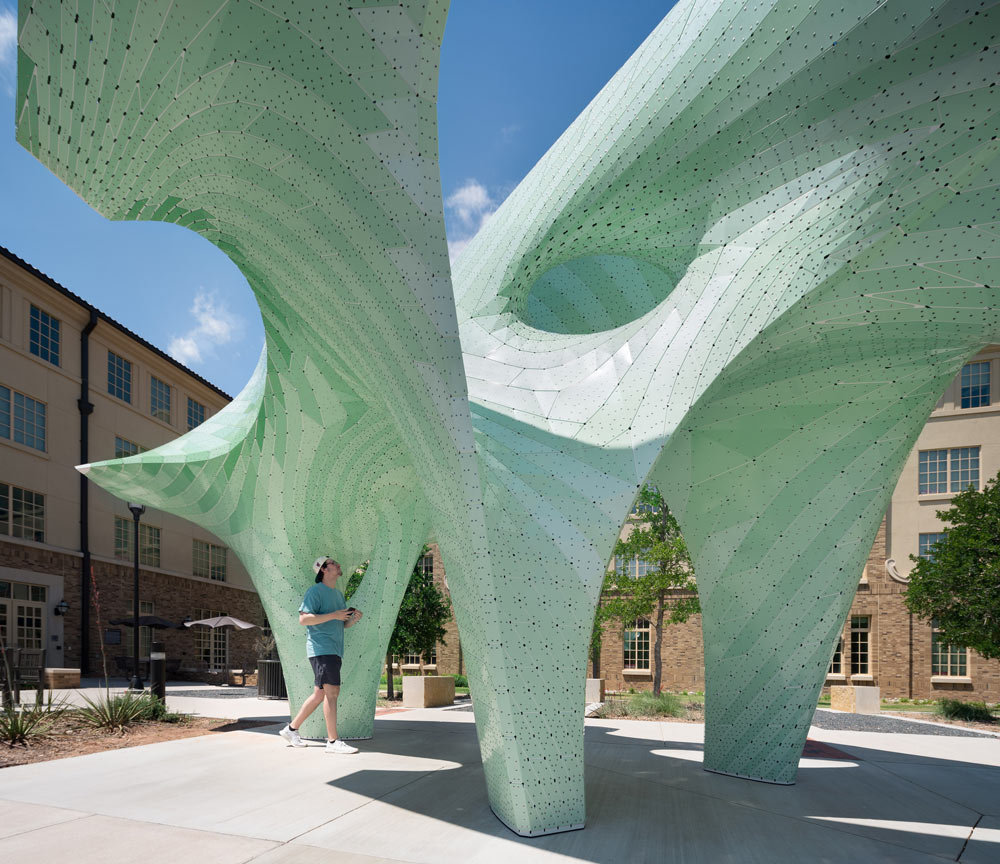 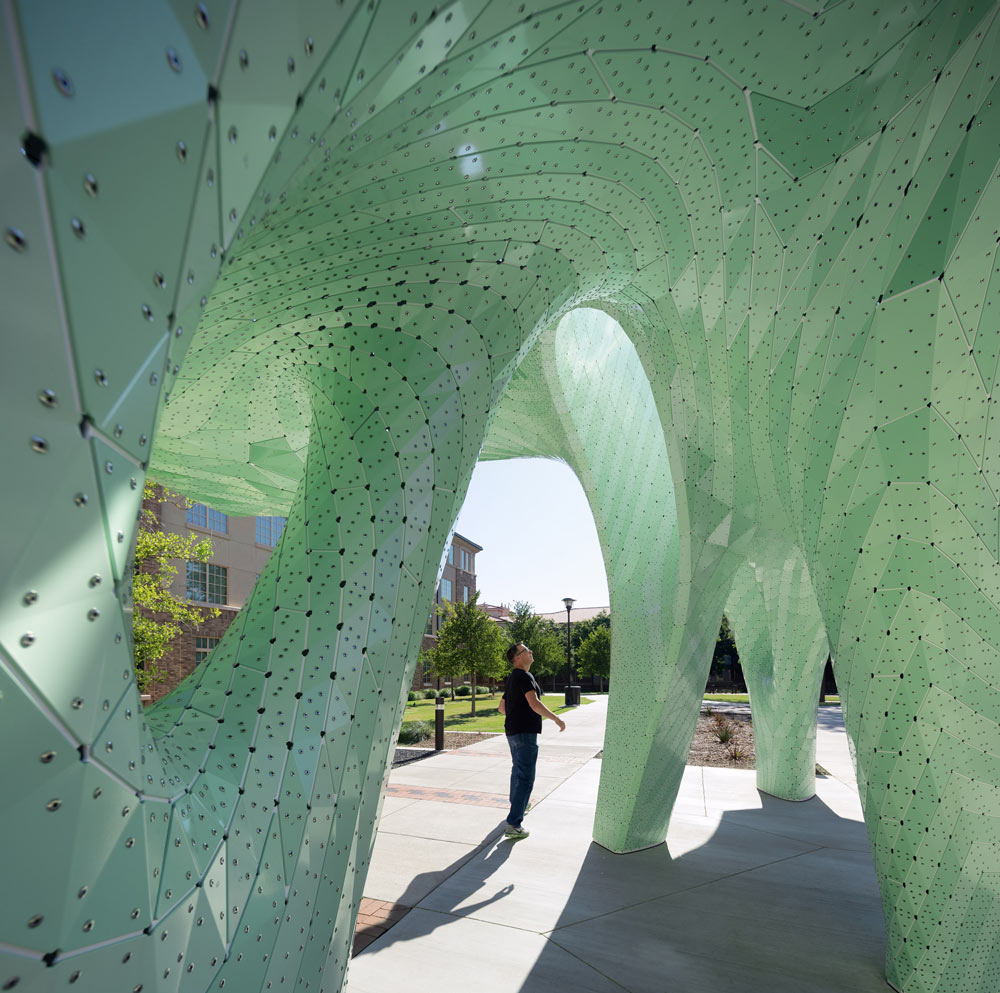 Zephyr Pavilion is a structure that introduces the principle of Free(d) Form in our body of work. Released from essential form finding constraints, one can sample, combine and curate from a structural topology repertoire to produce something truly environmentally unique. Zephyr is formally derived from carefully composed mesh topology samples. Each sample, once computationally relaxed, is known to create efficient structural moments within the overall architectural system. Rather than a universally applied form finding process, which can be somewhat limiting and predictable, topological composition combined with local form finding allows for greater freedom while still addressing structural efficiency. Such an approach to problem solving enables the combination of a shell structure and cantilevers into one integrated structural skin. Supported stripe to stripe, the work is opened to create spaces of volume not only under the flowing canopy but within the hollow body itself. Inside a wind tunnel, through a colonnade or under a canopy, the campus community will find a slowed moment of peace, as if carried away by a pleasant westerly wind.