In the spring of 1996 a group of students from the Department of Architecture at the Helsinki University of Technology travelled to Senegal to study a local architectural problem. Through a relationship with the sociologist Anne Rosenlew, we were introduced to the activities of a women’s group, and upon the initiative of the group we decided to design a center for the women’s associations in their neighborhood as an exercise. The idea was left to mature, and a complex process of several years’ duration took place, during which the project changed shape on several occasions.

Once the project received support from the Finnish Ministry of Foreign Affairs and after the city of Rufisque had donated a site for the women’s center, we began the actual design work. We followed the activities of the women’s groups in meetings, and through discussions we tried to establish the women’s real needs in terms of space. At times, it was difficult to focus attention on the order of realizing the project: someone would be concerned that the center would need a Moulinex blender, while another wanted forks, or a third wanted to small toilet seats for the children. We explained that the most important thing would be to build the house first and that, in the initial stages, we would need information about the activities they would like to pursue in the center. Our budget was not exceedingly large, and we had to underline repeatedly the importance of shared responsibility and the collection of funds. 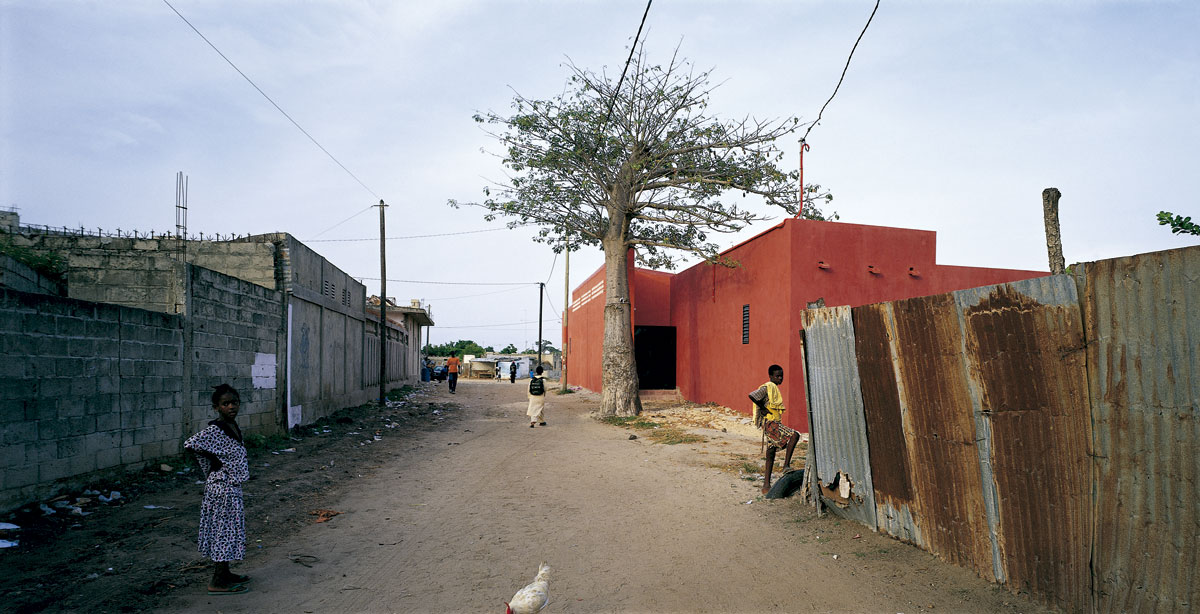 It was also important to inform other civic organizations in the area of the women’s center project from the very beginning. We had to answer questions such as: “Why a women’s center; why not a sports club, crafts workshop, kindergarten, or workshop for young people?” or “Couldn’t you arrange visits to Finland, or perhaps mobile phones?” By providing information from an early stage and by avoiding all manner of administrative ties we sought to prevent the politicization of the project and a situation where the completed building might no longer be reserved for use by the women’s groups.

Once the accommodation of rooms and space was established, the actual design initially required a great deal of footwork in order to internalize the scale of the fabric of the surrounding city blocks. We also studied the granularity of the area with satellite maps and, whenever possible, we visited the homes of the inhabitants. The custom of placing the various buildings of the home around a central courtyard appeared to follow the patterns of traditional rural architecture. Behind the kitchens and auxiliary buildings, there were always small courtyards shielded from view. The distinct borderline between public and private space was also notable. We did not want to underline the public nature of the new women’s center but rather to build it in the manner of a Rufisque house.

The surrounding building stock is densely developed and low, and we felt it was important to accommodate the women’s center in the fabric of the surrounding blocks in a manner that would avoid the fate of similar projects that we had seen, where the buildings stand half-empty in the middle of their open sites with no use for the yard area. Accordingly, we designed a solid outer wall for the center, with the various structures grouped around the inner courtyard. The red color of the house was the result of various experiments; the strong iron-oxide hue gives the house its own identity amid the greyish fabric of the surrounding blocks. Upon completion, the building was immediately given the name Kër Xonq – the Red House.

It wasn’t simple to assemble a competent collaborating team for the project. We knew a few qualified building engineers, but cooperation foundered when the engineer did not want to be paid because of the public utility nature of the projects. Accordingly, the work remained undone. We finally hired Galaye Niang, a competent and professionally skilled engineer to prepare the structural calculations. He was not only a skilled engineer, he also has a sharp eye for noting and perceiving details, and he was often the first of the team to understand our intentions, which he explained to the others.

We wanted to apply ecological and local solutions in the construction work, and for a long while we studied opportunities for using stabilized earth bricks. But there was no suitable type of clay for this purpose in the nearby region. Since Sococim, the largest cement factory in Western Africa, is in the city, cement is accordingly a local material. This issue was ultimately solved by the fact that Sococim donated all the necessary cement for the project. The skeleton of the building was made of concrete as a column-and-beam structure. The walls were made of cement blocks. The bars of the reinforced concrete were made of recycled metal, donated by the Sosetra factory. Recycled wheel rims from cars were used for vents, and “glass bricks” for windows were made from old bottles, which were split and the bottoms were joined together. We felt this was a natural way of recycling, but it happened that the best green bottles were beer bottles, which caused our building contractor extra worries. A good practicing Muslim does not drink beer, and he did not particularly relish even collecting and transporting the empty bottles in his car – although after the house was finished even he laughed at the whole situation. 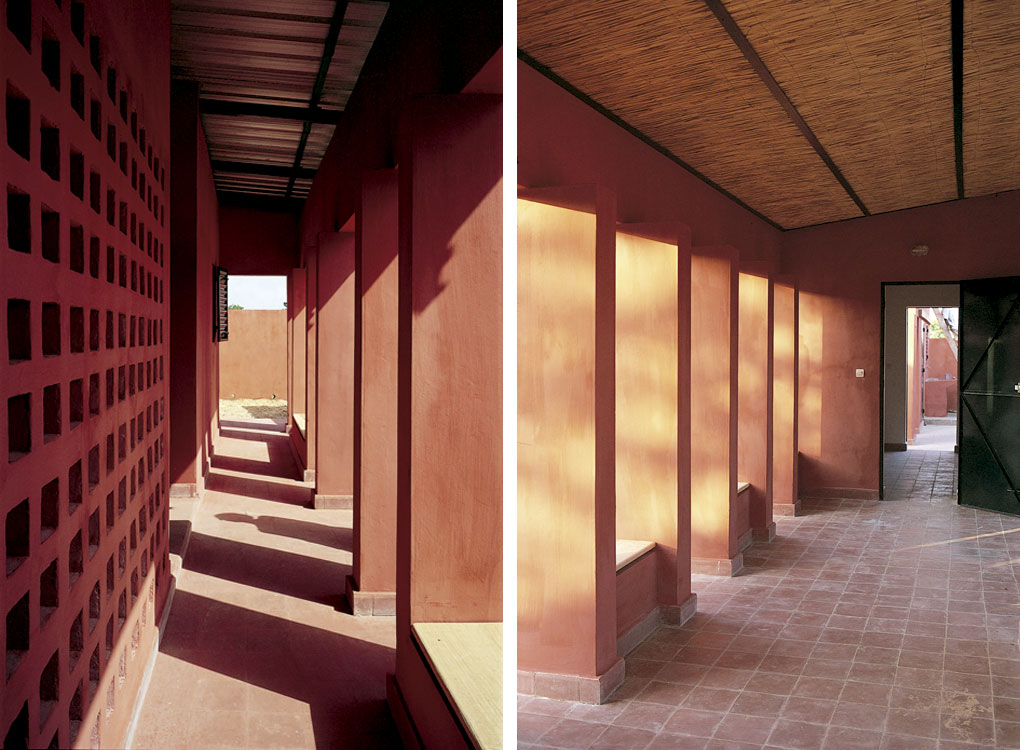 Following our own aesthetic concept of recycling, we wanted to leave the metal parts unpainted, in addition to the sand plastering of the building in keeping with its surroundings. The local partners took an adamant position, however. Leaving the center unpainted would be a sign of a lack of resources. In Senegal, recycling is often dictated by the force of circumstances and it is associated with different values than in Finland. We thus sought to make even the recycled items things of beauty, with finishes to express the right message.

The roof of the women’s center is made of corrugated metal on steel beams, with thick woven straw matting as an insulating ceiling layer. The intervening space is ventilated, which keeps the air inside the building pleasantly cool. The ventilated and insulated ceiling structure was a technical solution that we wanted to keep, even though it the idea was unknown locally and required a great deal of effort in its realization.

The contractor assembled his crew mostly from among local residents, which provided jobs, trained people, and created an atmosphere of shared responsibility. The young men who worked on the project were, for the most part, the sons of the women in our target group, a point that we felt was important. 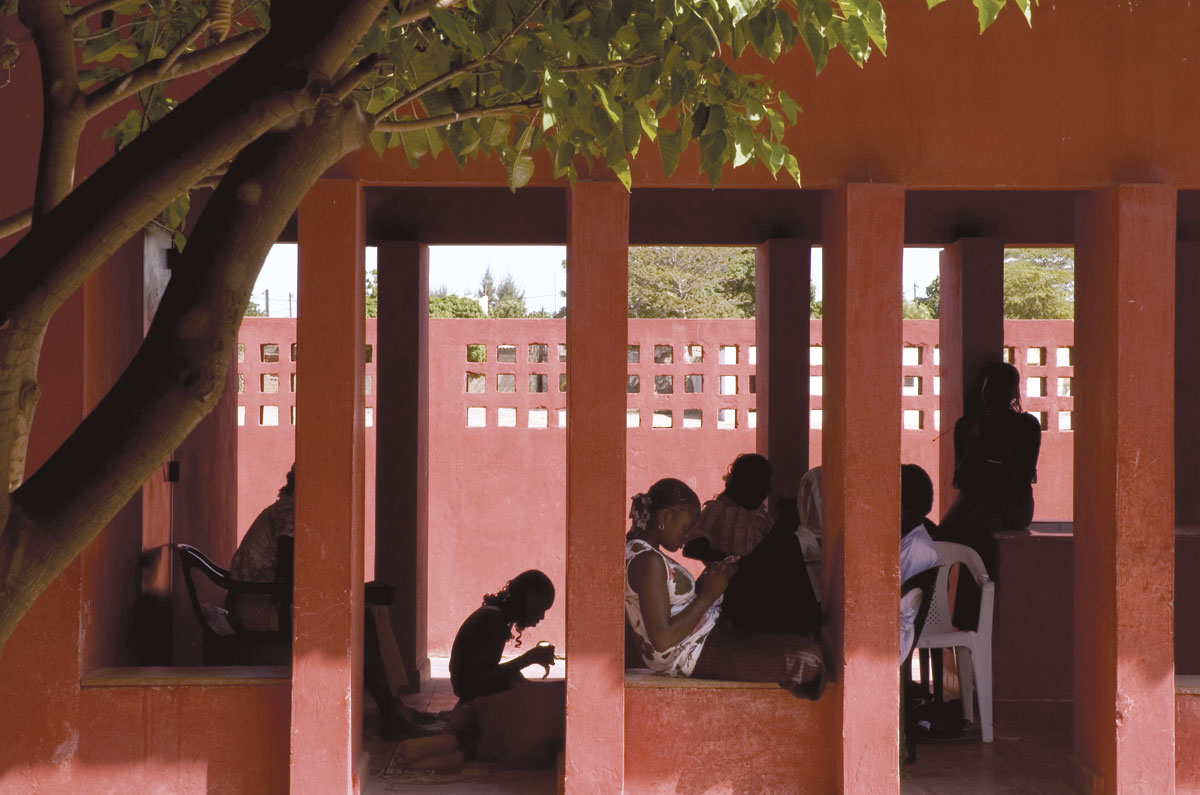 The opening of the Red House drew hundreds of people, and the mood of the event was joyous and relaxed. We had travelled from Finland to Senegal and back for five years and, despite several bouts of fever and gastric disorders, we had avoided malaria and learned a valuable lesson about humanity and our profession. 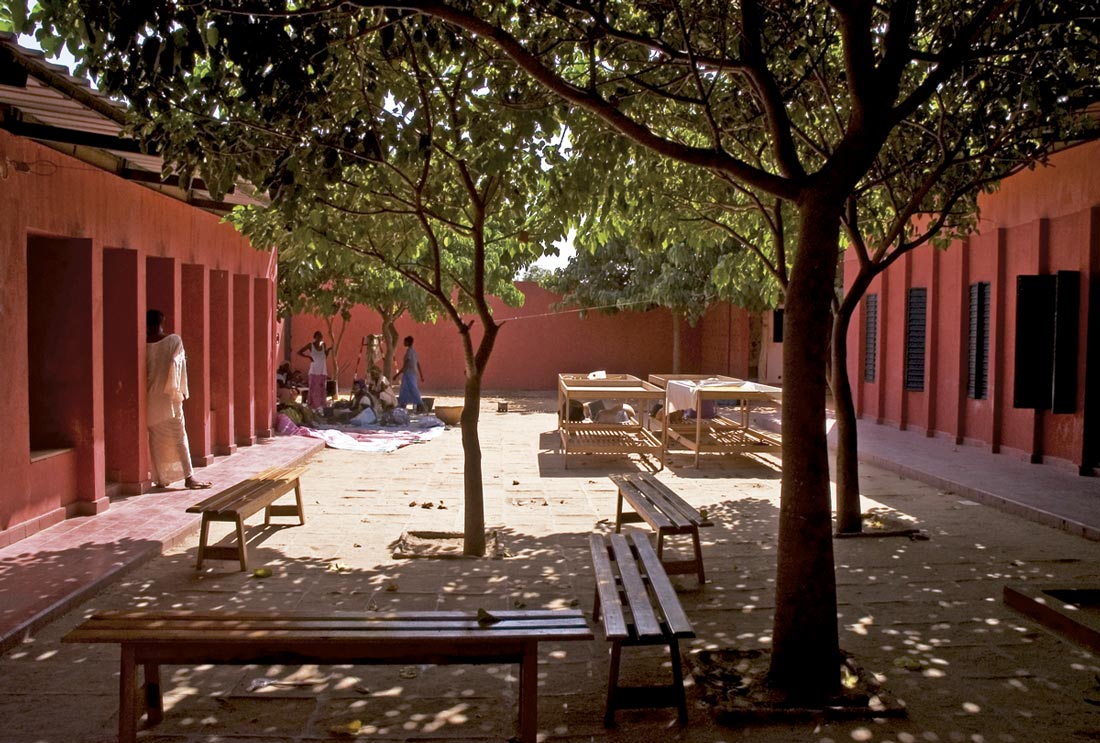 « On their Exhibitions Approach
Changing Epistemologies »