Clouds, drizzle, rain, snow or hail – in all its physical states water is related to sky.

However, if we are requested to think about a [swimming] pool, our imagination automatically starts to dig into the ground. Seas, lakes and ponds explain why we react in that way: essentially, a pool feels like a piece of a lake. It makes sense; the image corresponds to the word: water that rests smoothly on the ground. Water defines the surface. 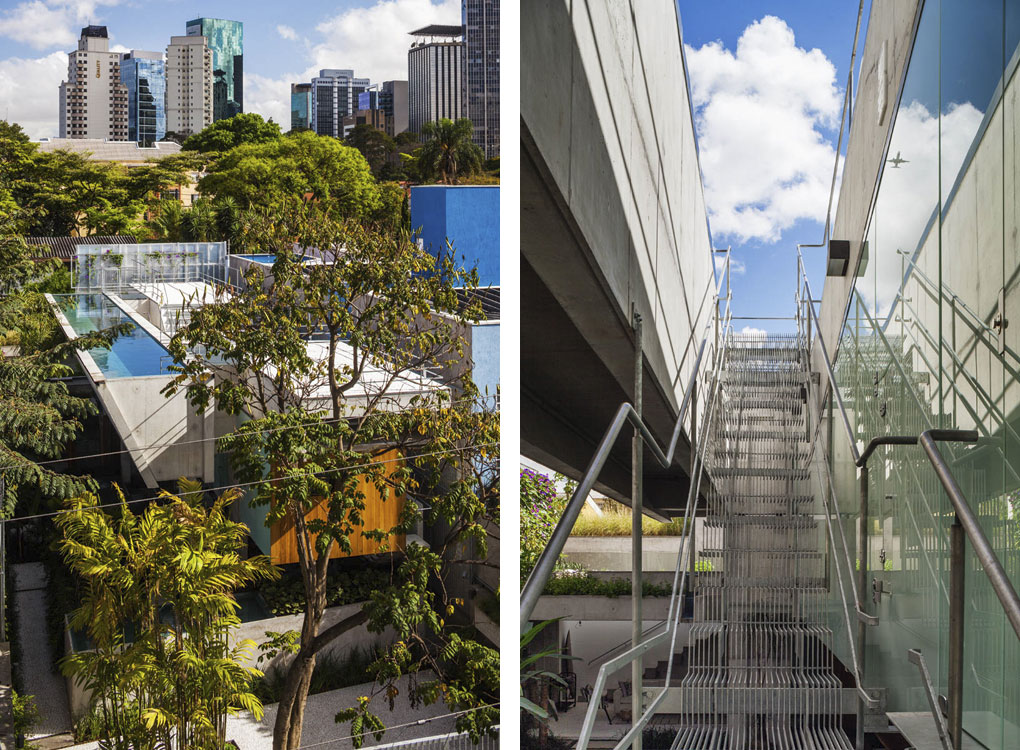 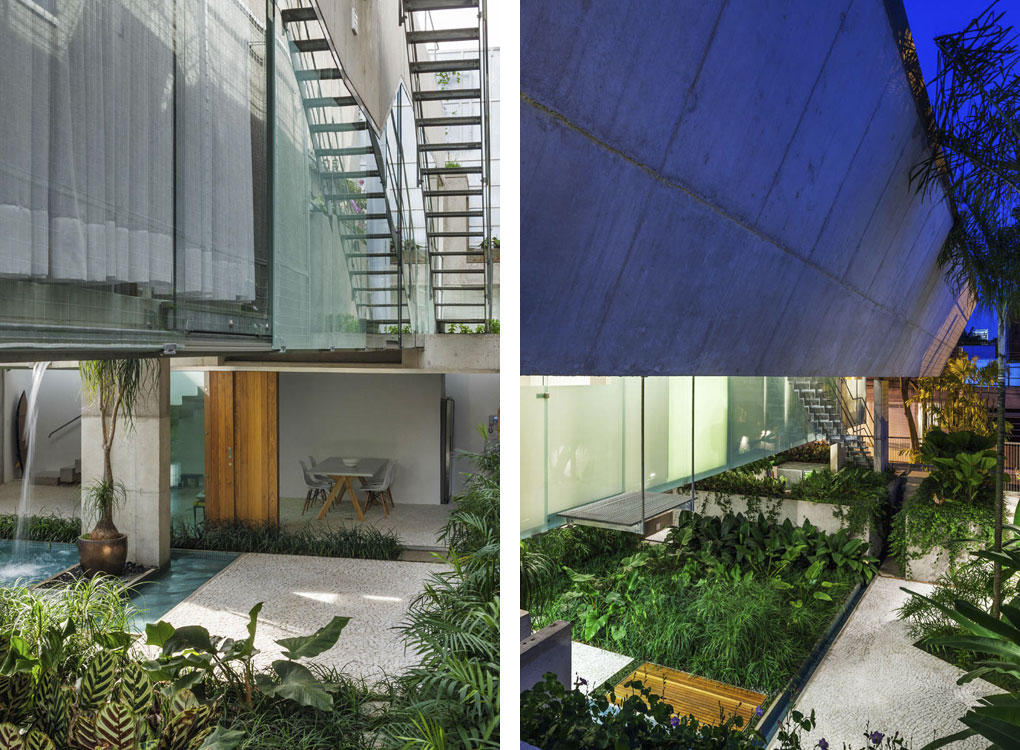 But if I mention a specific type of pool, a water tank or a water tower, we first imagine an elevated volume of water, a pool detached from the ground level. In this case, hydrostatic pressure is a requirement to fill pipes, to supply water. The water level implies a potential possibility.

As we walk on the ground, we might ask: where is the surface? In the specific sense of the word, surface has no layers or thickness. However, when you walk in a city like São Paulo [or New York], the ground level does not correspond to the surface anymore. There are some pieces of the ground that haven’t been touched by the sunlight for decades, since buildings have permanently shaded them. 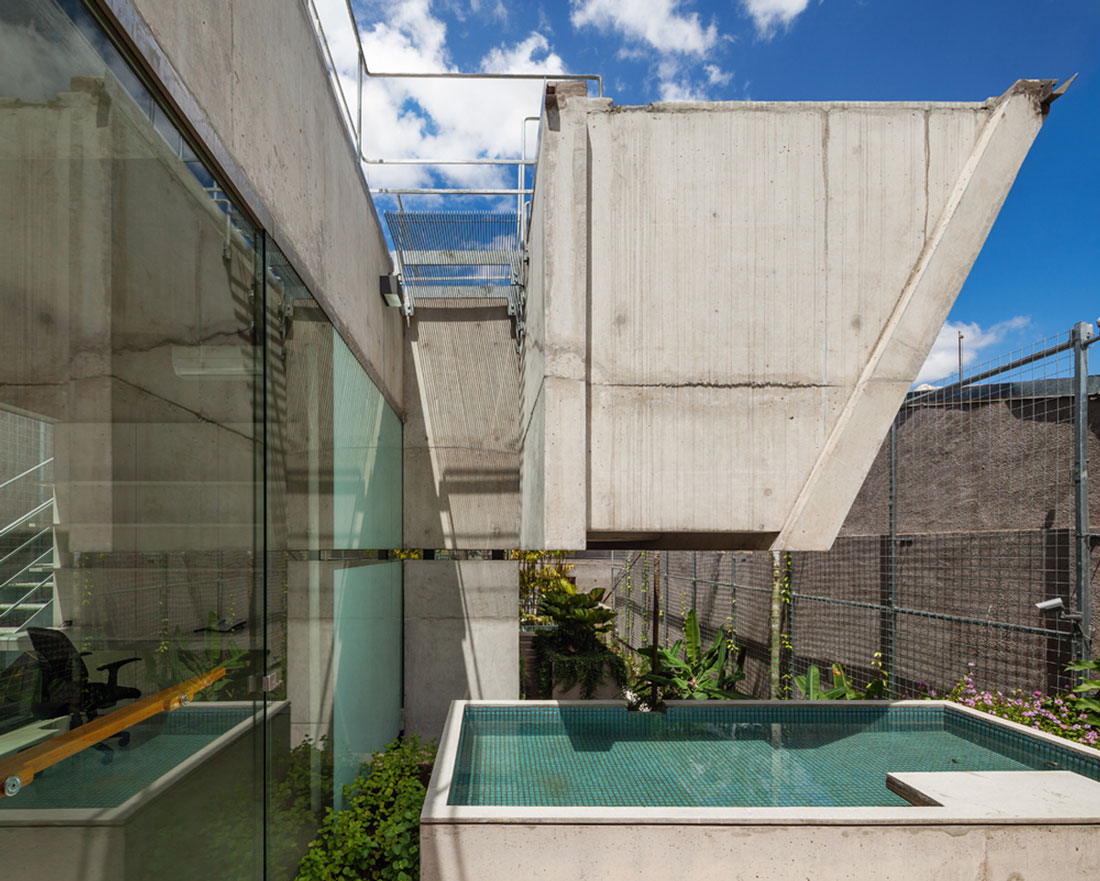 In this specific site, the neighborhood’s average height is defined by the zoning code: 6 m. No side setbacks are required. The neighboring building on the east shades our site throughout the morning until noon, when the neighboring building on the west starts to shade it during the whole afternoon. Therefore, if we want to build a pool that will be exposed to sunlight throughout the day, it is crucial to define its surface: six meters above the ground level.

The assumption here is like swimming in a water tower and harnessing that potential as a design possibility. One more state of water, related to the São Paulo sky. 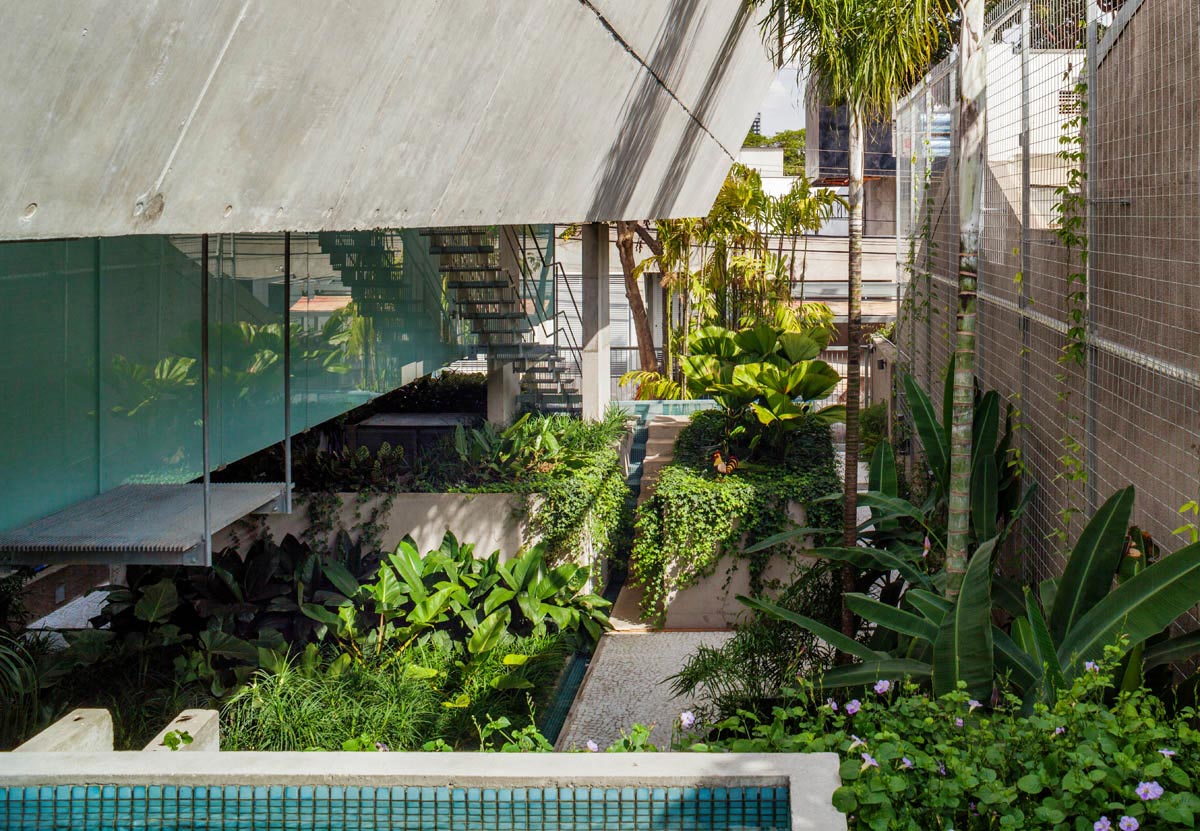 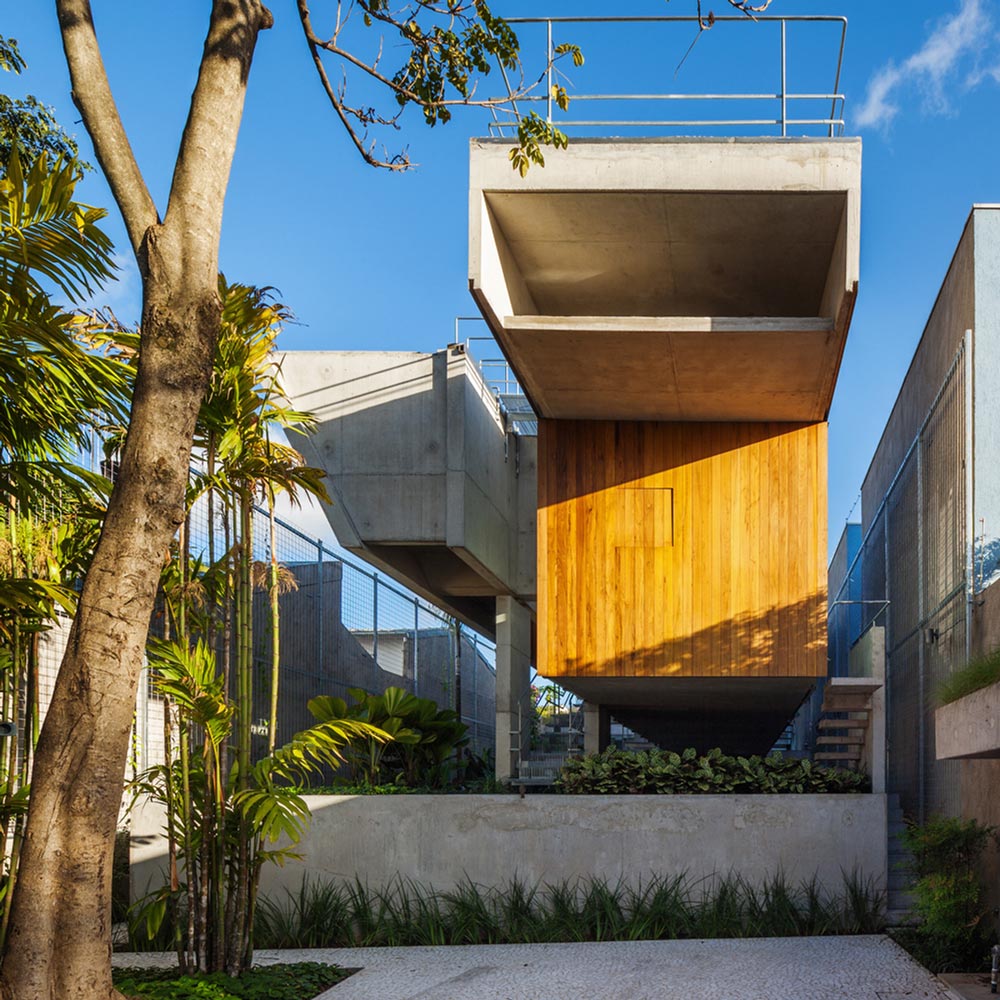 A Weekend House in the City

São Paulo is a metropolis of 20 million people. It is located approximately one hour from the coast. Because of severe traffic jams, its inhabitants spend hours commuting every day. On weekends, especially in the summer, hundreds of thousands of people drive to the beach, causing traffic jams on the roads.

In order to avoid being stuck in traffic during weekends, we received an unexpected but rather logical demand as an alternative: a weekend house in downtown São Paulo. 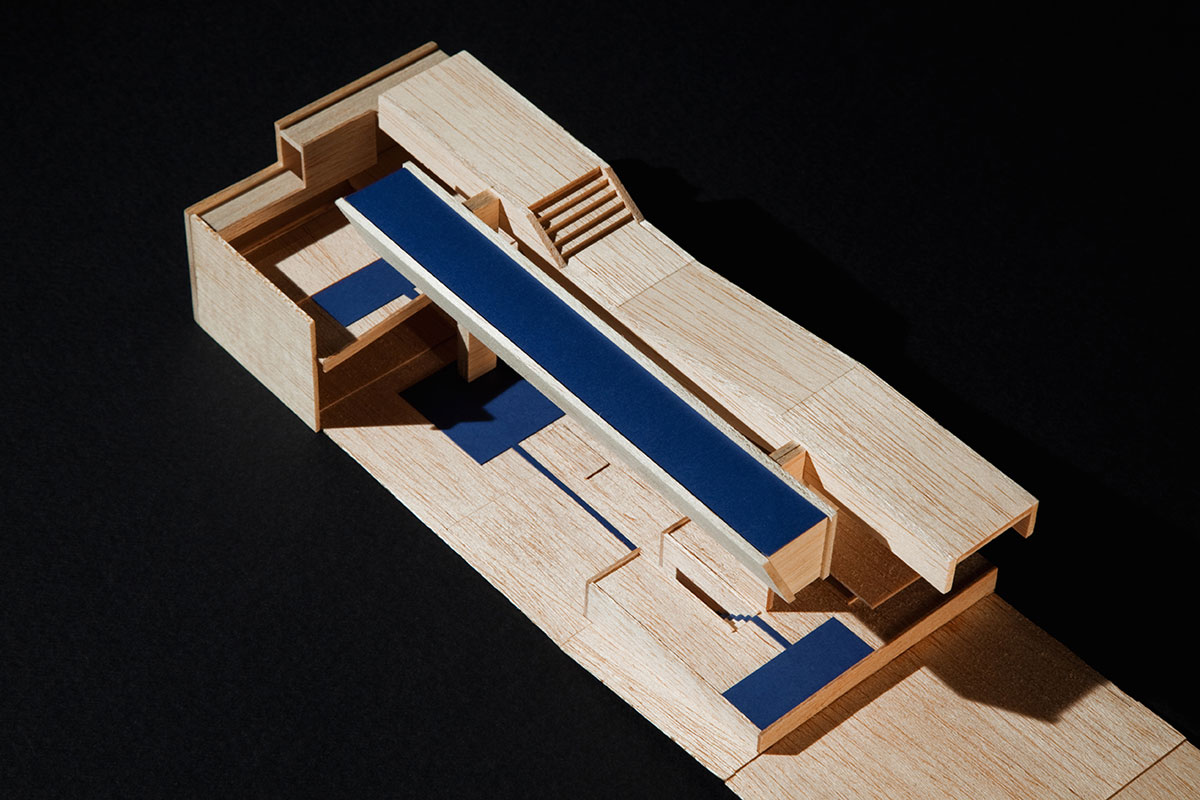 As an anti-FAR [floor area ratio] approach, a swimming pool, a solarium and a garden are the main elements of this project. In a properly inverted hierarchy, everything else in the program is complementary: a bedroom, a small apartment for a caretaker, and a space for cooking and receiving friends.

The site is very central, between an arterial avenue, Avenida Faria Lima, and a metropolitan infrastructural axis [road and railway] built on the shore of the Pinheiros River. The site is also exactly under the airport conical zone, meaning all flights coming in from Rio de Janeiro fly over the site roughly every 7 minutes.

Pool and solarium were designed as parallel volumes. Two columns were placed in the one-meter-wide gap between them. The 12 m span is faced on one side by beams supporting the pool and on the other by beams that support the solarium and also hang the floor underneath. Structurally, the mass of the pool acts as a counterweight for the volume that holds the inhabited spaces. In other words, the water is balanced by the beach.

The ground level was kept free from any construction in order to achieve the maximum garden area ratio. As a result, there are three different layers or three levels for three different moods: ground level [garden – introspective or encompassed by the site limits], apartment level [the only indoor space floating above the ground and underneath the pool], and rooftop [swimming pool and solarium, an extroverted or panoramic space].

This building and its program differs from the focus of traditional architectural projects in two ways: the metropolis becomes a possible place to stay and enjoy during the weekends, and elements generally considered secondary in a big house become the fundamental components.

« Weekend House
House of Would »