Innovation and functionality is the binomial that characterizes one of the newest projects by PMMT, a Catalan architecture firm that just concluded the TR House in Barcelona. Built on a site that presents an accentuated topography, where a pre-existing historical house sits surrounded by a spacious garden area, the new house had to comply with the dimensions defined by the urban planning regulations, while at the same time integrating itself into the landscape and functionally adapting to the client’s needs. 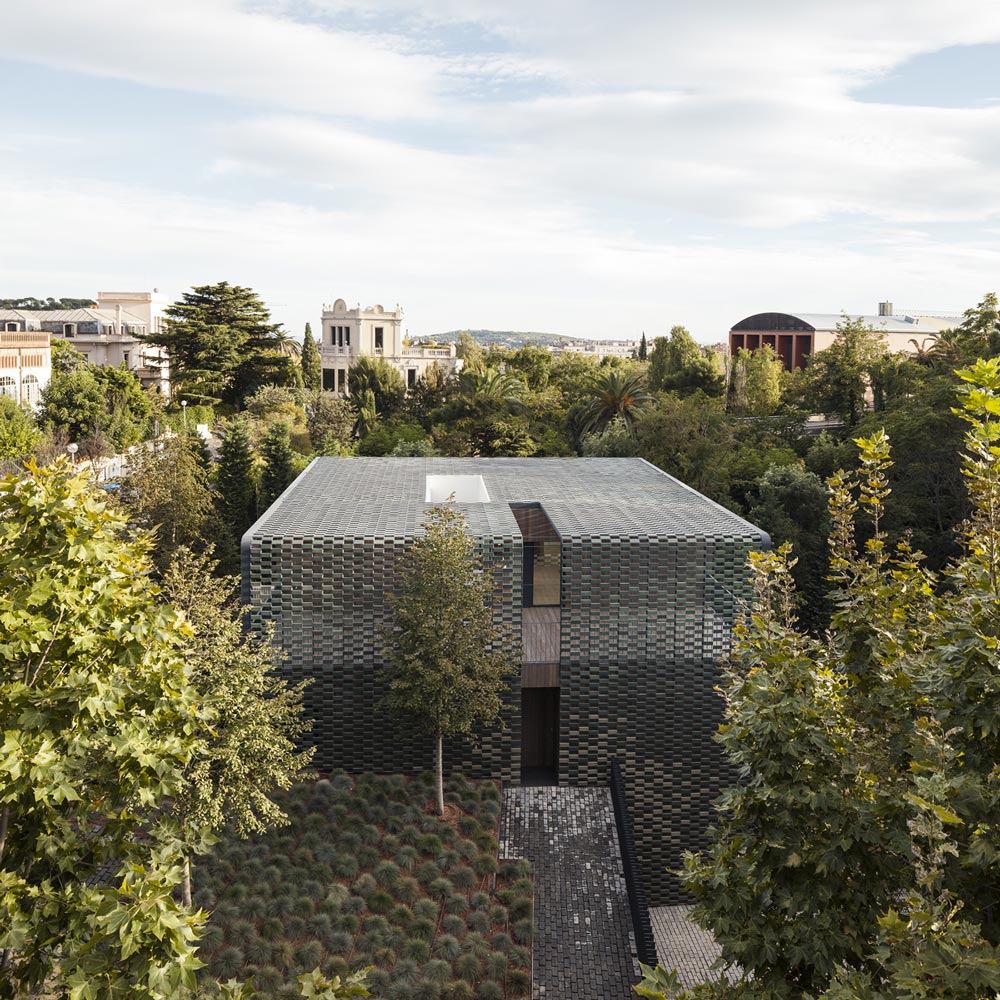 The result is a 13 x 13.5 m three-storey volume that turns all of its rooms in the opposite direction to the main façade, in order to achieve privacy and the functional features demanded by the client. Meanwhile, the other façades are wrapped in a green vitrified ceramic skin that camouflages the house in its verdant surroundings. 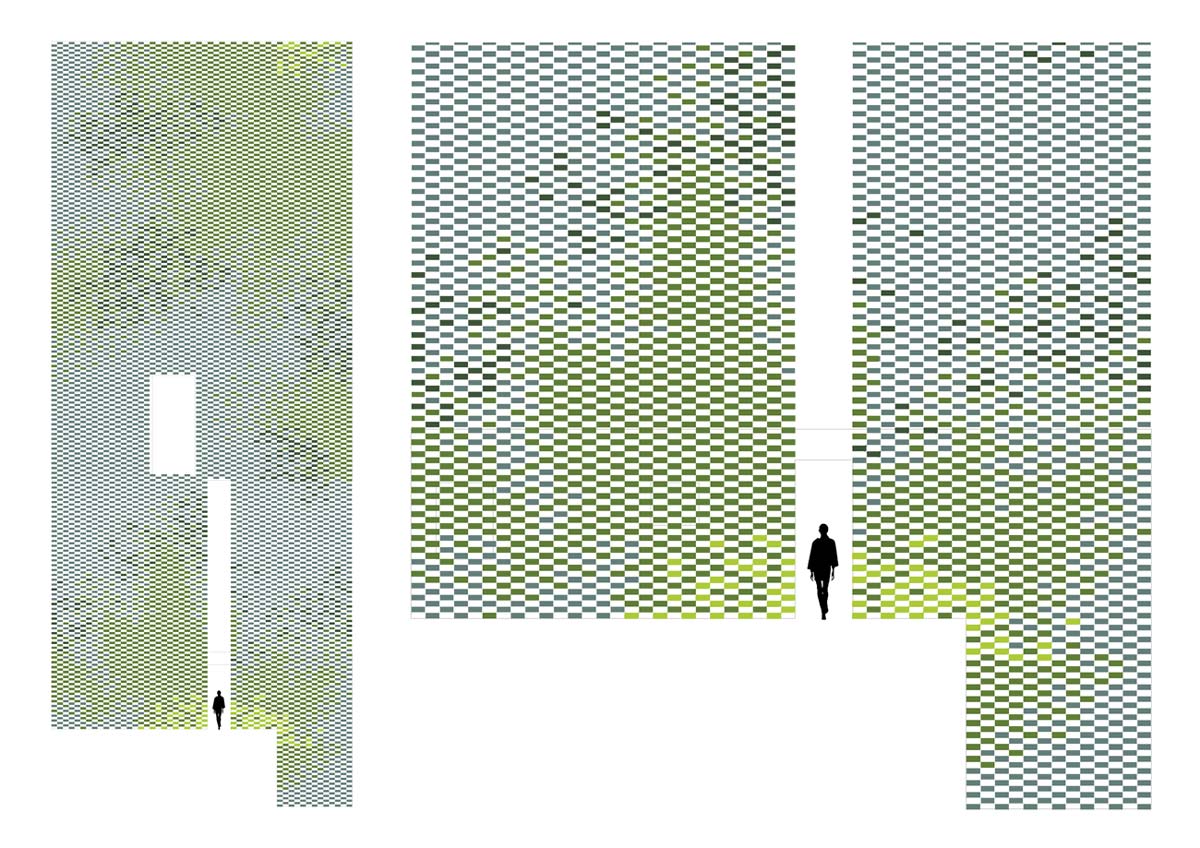 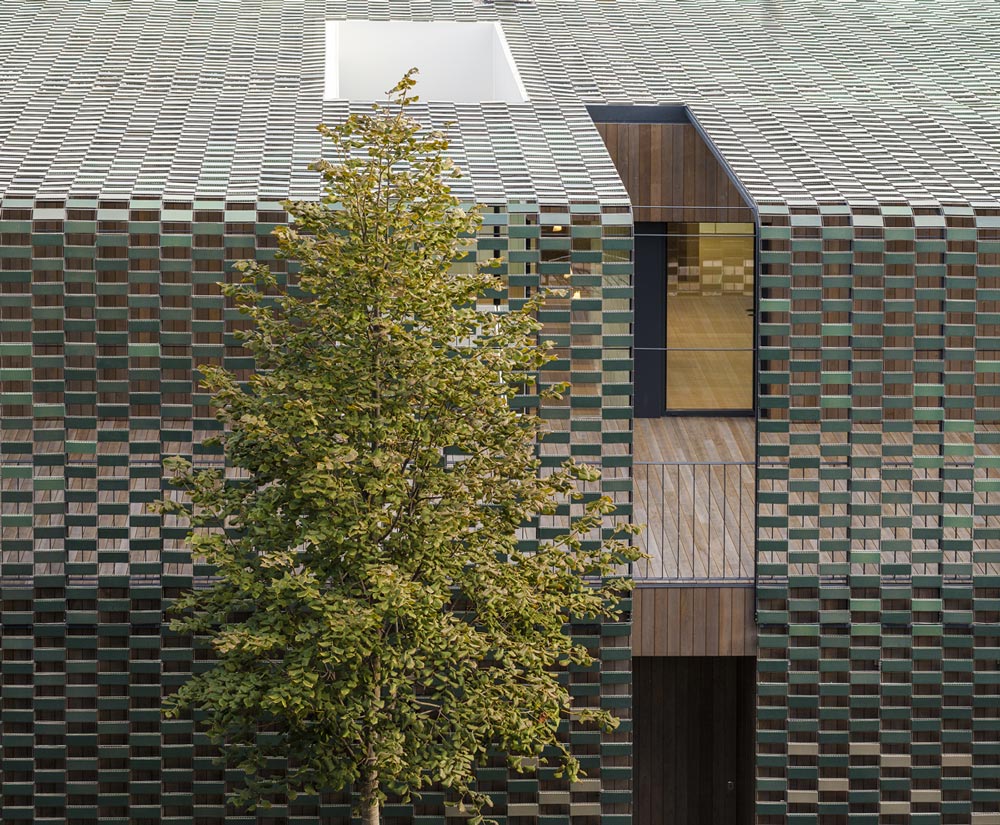 TR House Barcelona is a single-family house with a compact morphology. Its shape is the answer to the limitations presented by the pre-existing conditions, combined with an innovative solution and with solid functional criteria. In light of the urban planning constraints of the site, and because it is located in a recessed area, we had to solve an accentuated slope between the main entrance and the access to the house, creating two levels of access; one inferior and one intermediate. Through slopes and ramps that establish different relations between the landscape, the house and its interiors, we’ve tried to minimize the big impact of the gap between the main entrance and the lower level of the site. 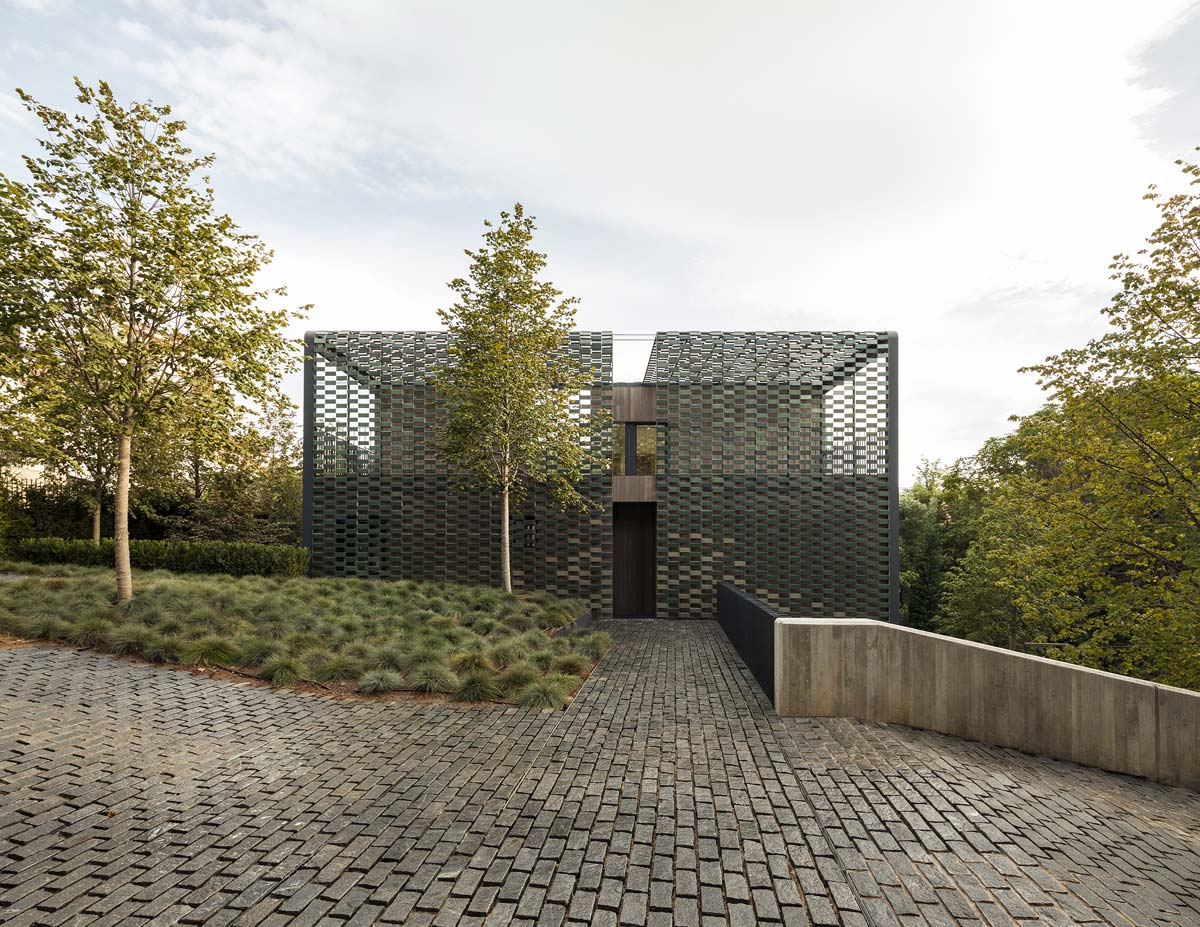 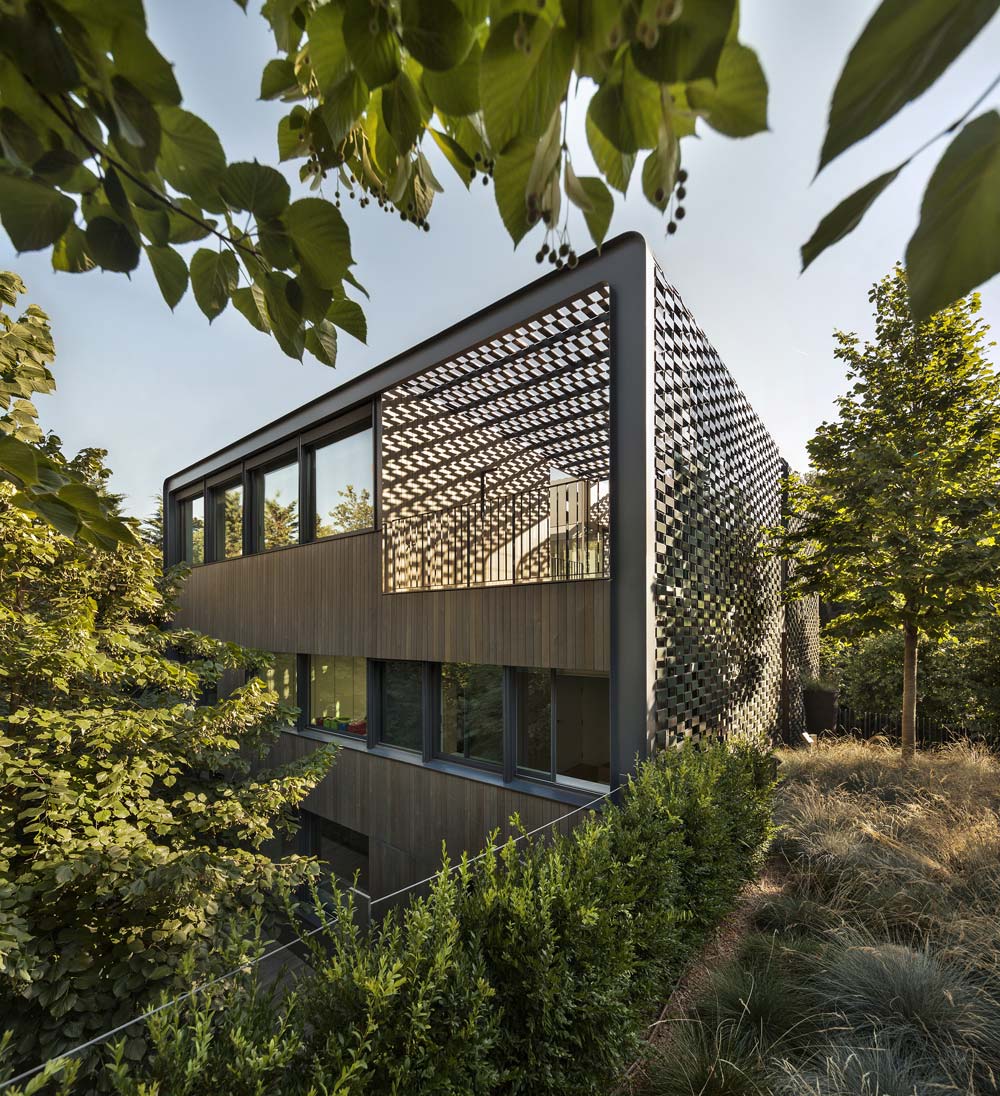 The cube-shaped volume, located on a lower level than the street, tries to establish a visual relationship with the creek that borders on the site, at the same time as it integrates itself visually with the landscape and with the surrounding higher buildings. The volume is organized in a way that gives response to the users’ needs, creating a central axis from which you can access the several rooms while, at the same time, guaranteeing privacy from the street and neighbours and a visual relationship with the natural environment. In the opposite direction of this axis, the house seeks to merge with the verdant surroundings.

The house is structured around a central patio that articulates all the rooms; the perimeter corridor surrounds it at the same time as it connects the different floors with a stairway, also located around the same patio. The existence of this central area allows for the entrance of daylight and creates an interesting game of crossed visual perspectives from one room to another. The lower floor is occupied with the “day areas”, such as the living and dining room and the service areas. As for the “night areas” – bedrooms and corresponding bathrooms – they are situated on the middle floor. The top and third floor is occupied by an office area, a guest room and an outside terrace covered by a pergola. 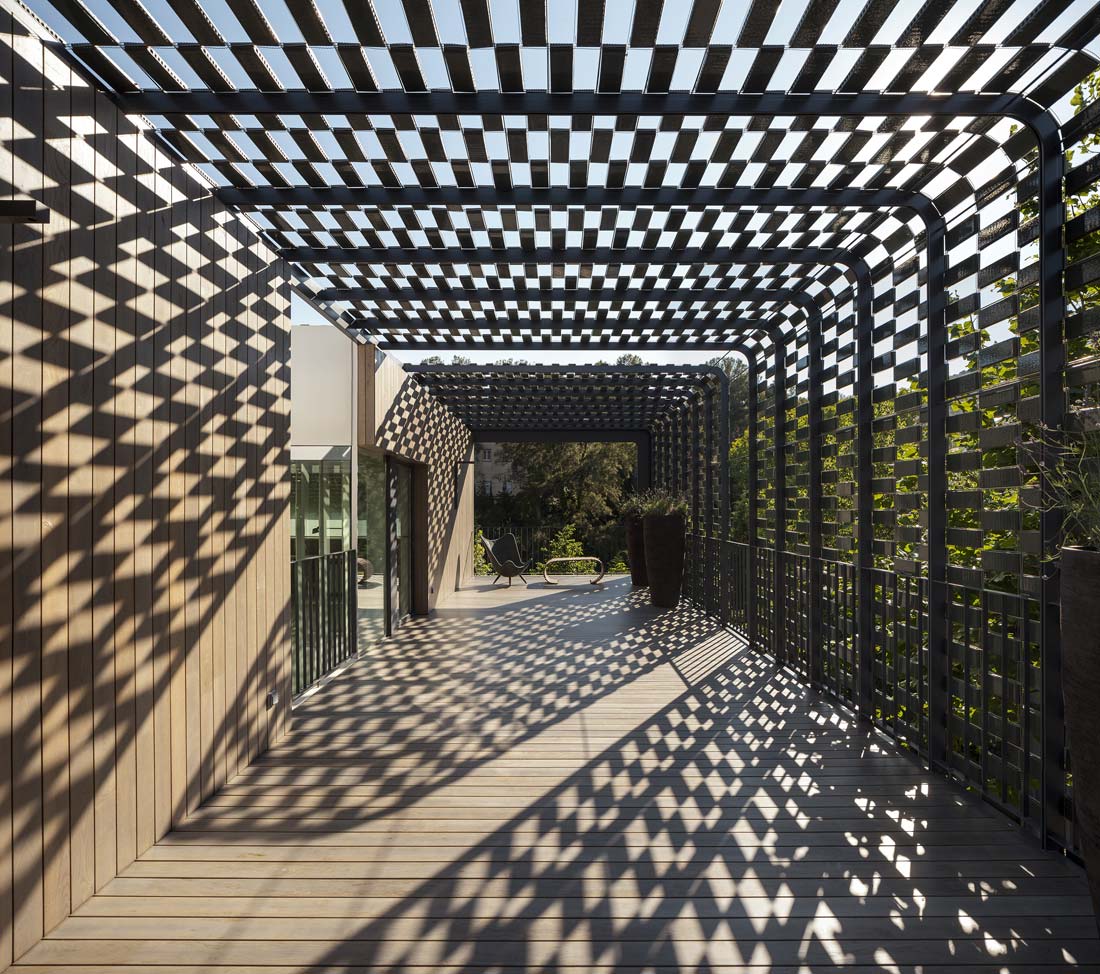 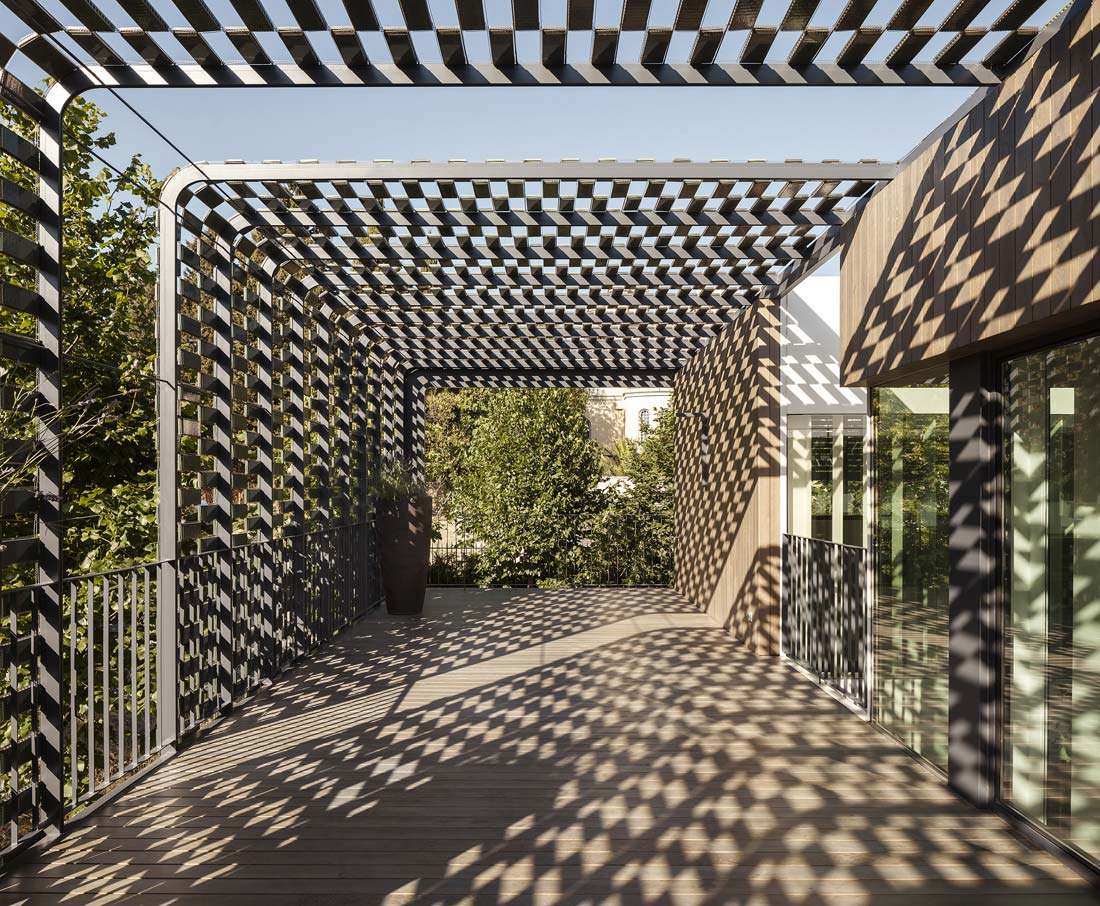 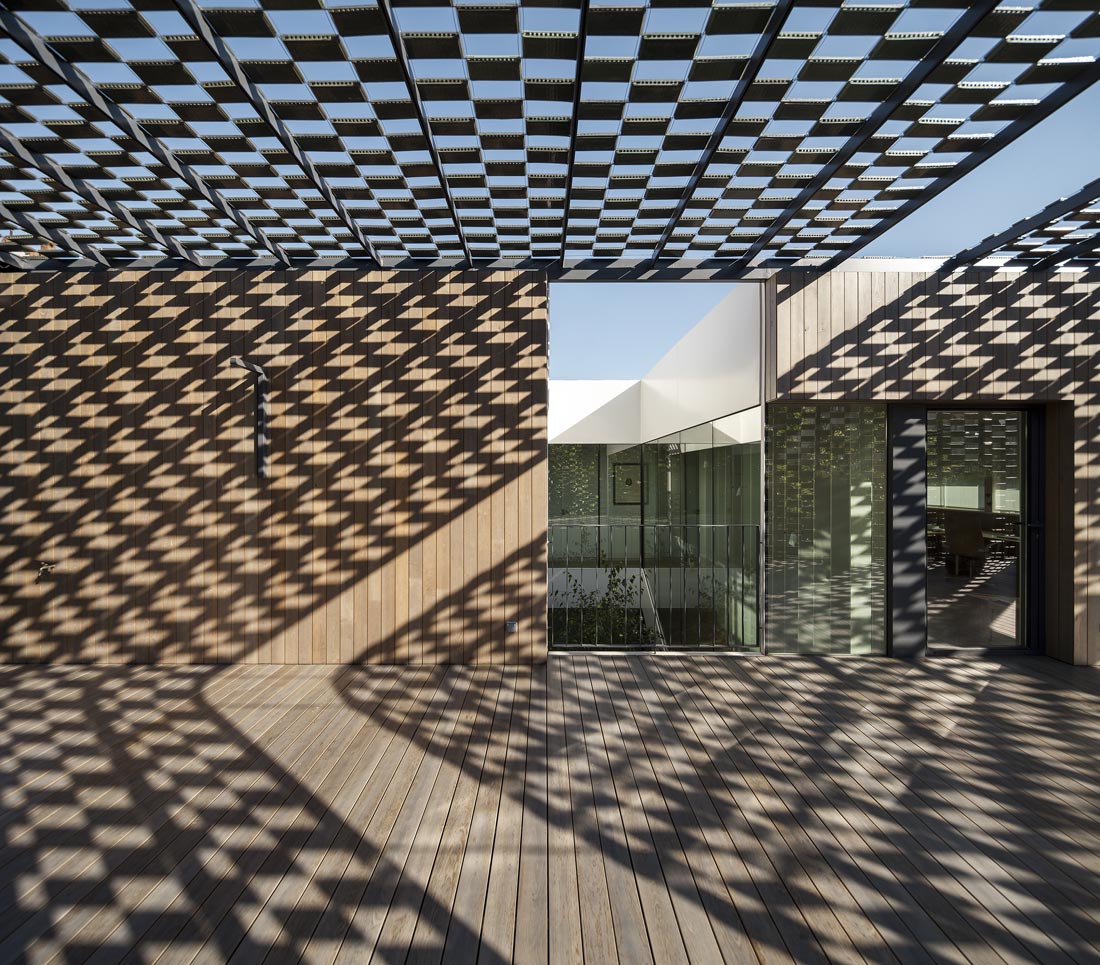 The image of the building aims to respond to the established functional needs. On one side, an outer envelope made of vitrified ceramic tiles, assembled on a stainless steel wired net, responds to the need to merge with the green surroundings. Within a range of greens, we worked with four different tones to obtain the same shades that one observes in the surrounding landscape during the four seasons of the year, creating the required merging feeling. By creating this ceramic curtain, we were able to resolve four plans that in architecture are normally solved in separate ways: the façade, the pergola, the curtain walls and the roof.

On the other side, the façades that the rooms open onto respond to visual and privacy settings, which connect to the outside or hide the inhabitants from the surroundings. The resulting solution is a façade created with chestnut wooden slats, with openings that were strictly dimensioned according to lighting needs and users’ comfort. These opening areas include a hidden system of adjustable horizontal aluminum slats that allow the user to control solar incidence and to provide greater comfort levels. 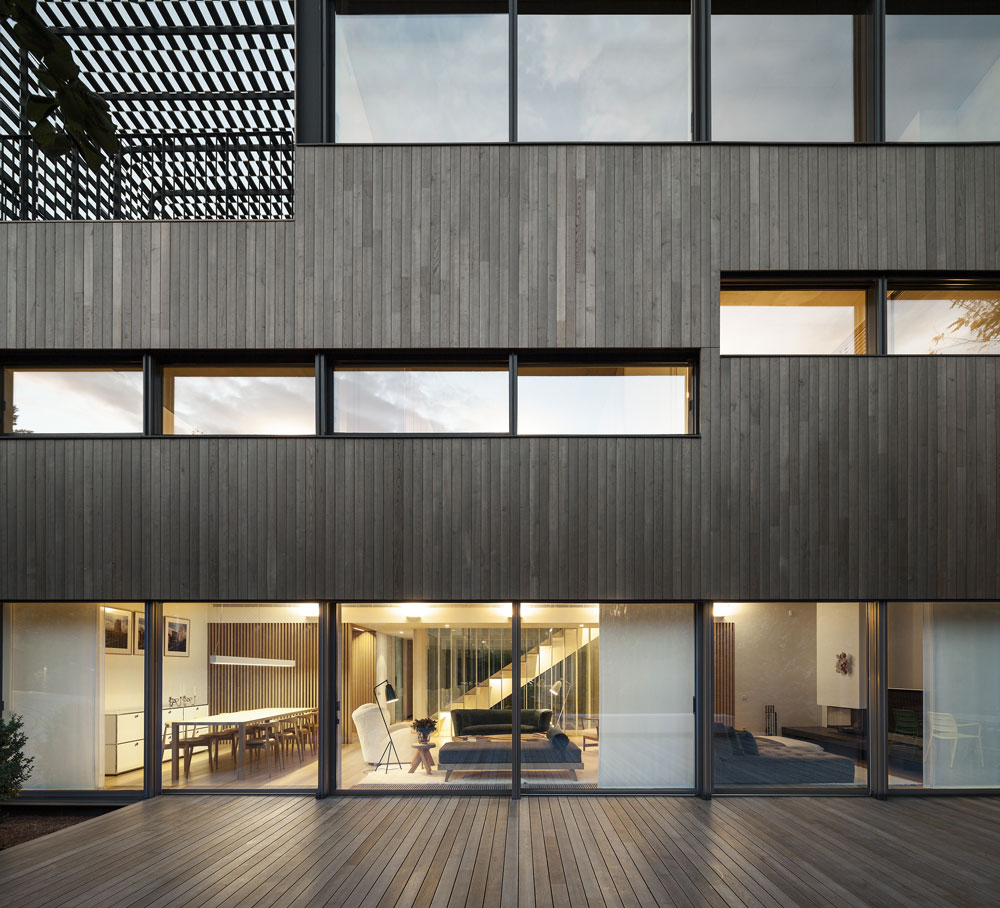 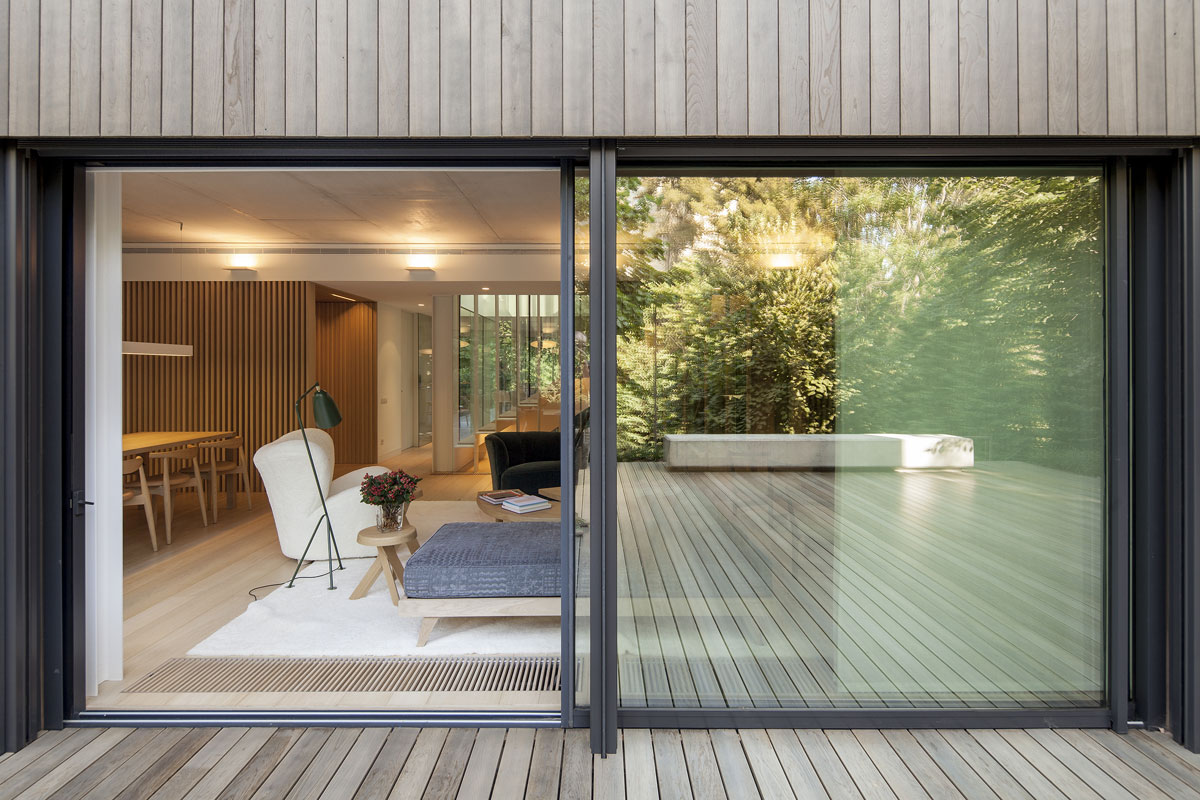 The outside platforms are stitched in a way that connects the different access areas located at different heights, with a cobblestone ramp made of granite pieces interspersed with small grass areas. 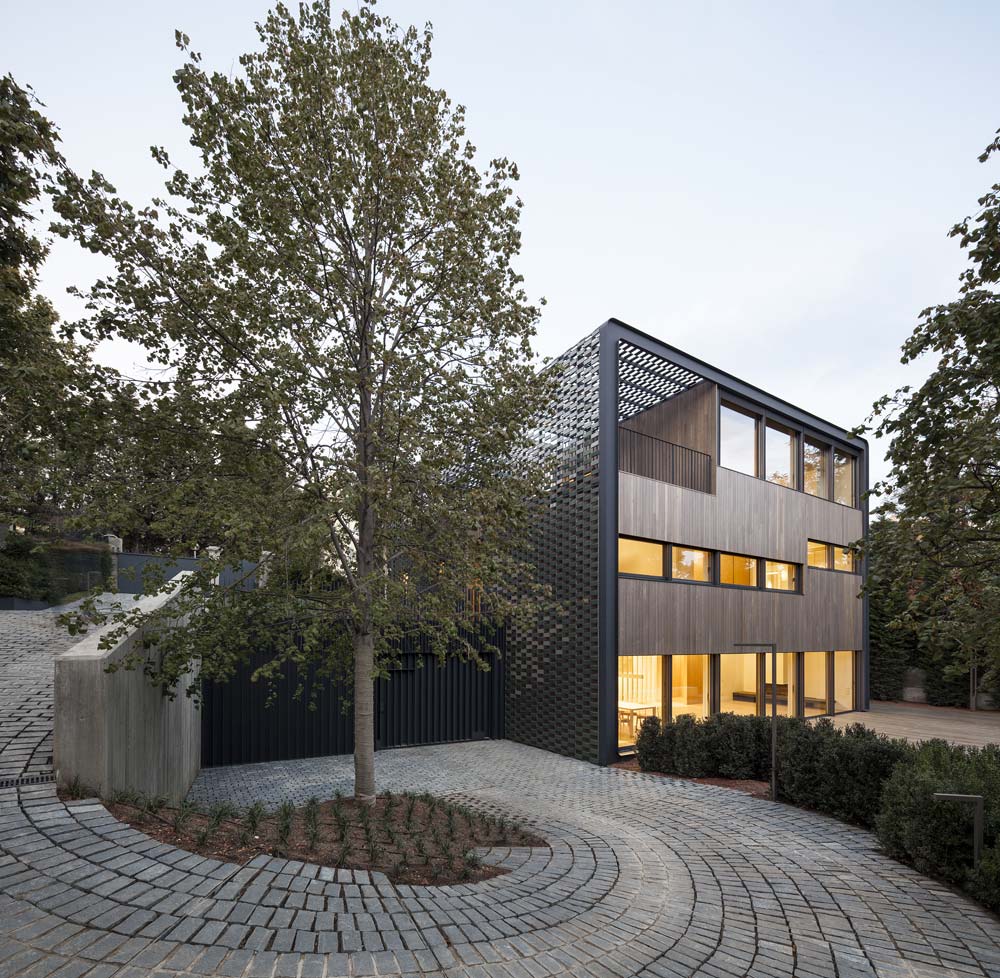 On the exterior side that is open to the landscape, a large wooden platform fulfills the function of lengthening the living/dining room area, extending it to the outside, creating a nice outdoor living space, under the shade of trees. This platform also provides access to the back part of the house, establishing an interesting traffic flow. 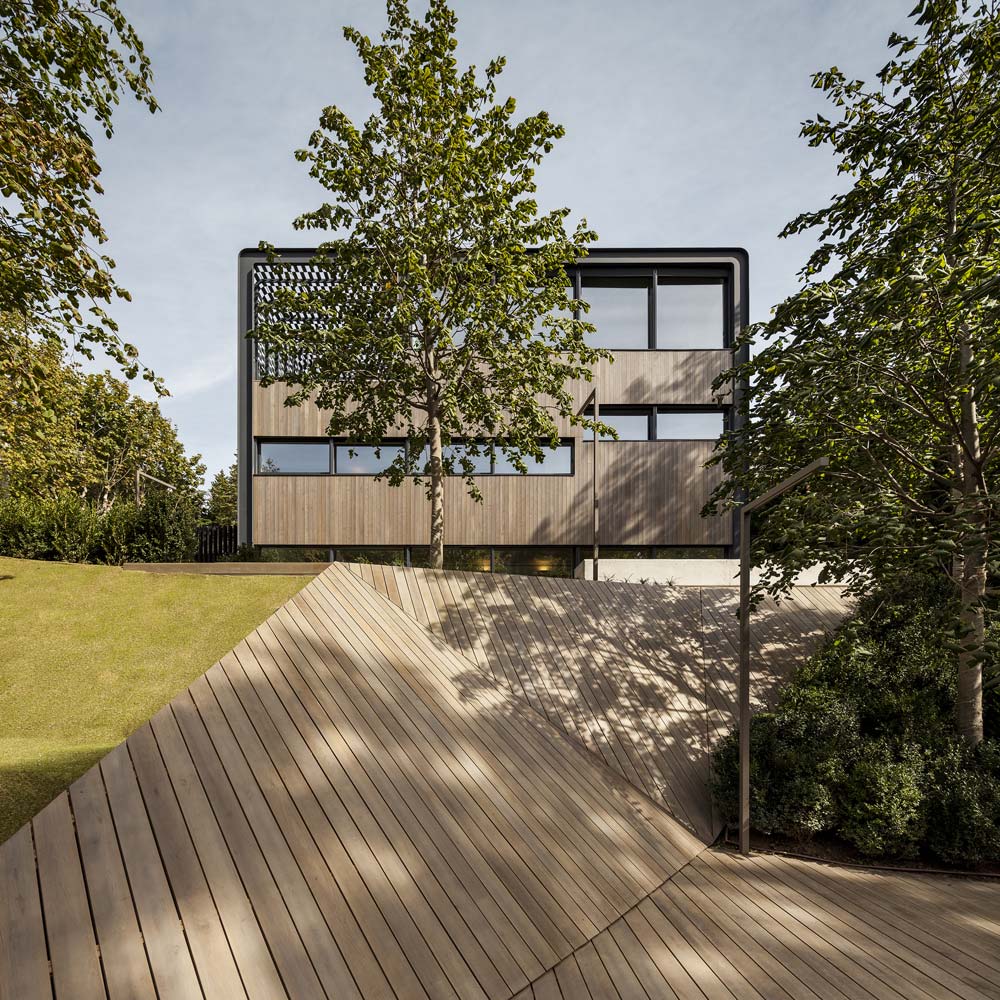 Due to its morphology and topography, the trapezium-shaped site present a heavy slope at the tip that is closest to the creek. In this area, further away from the street, a playing area is generated. The pronounced slope is solved with a wooden platform sequence that establishes a dialogue between the house and the garden, since the platforms are made with the same type of chestnut wood used for the façade. The proportion and arrangement of the wooden pieces are the same, both on the facade and on the exterior platforms. 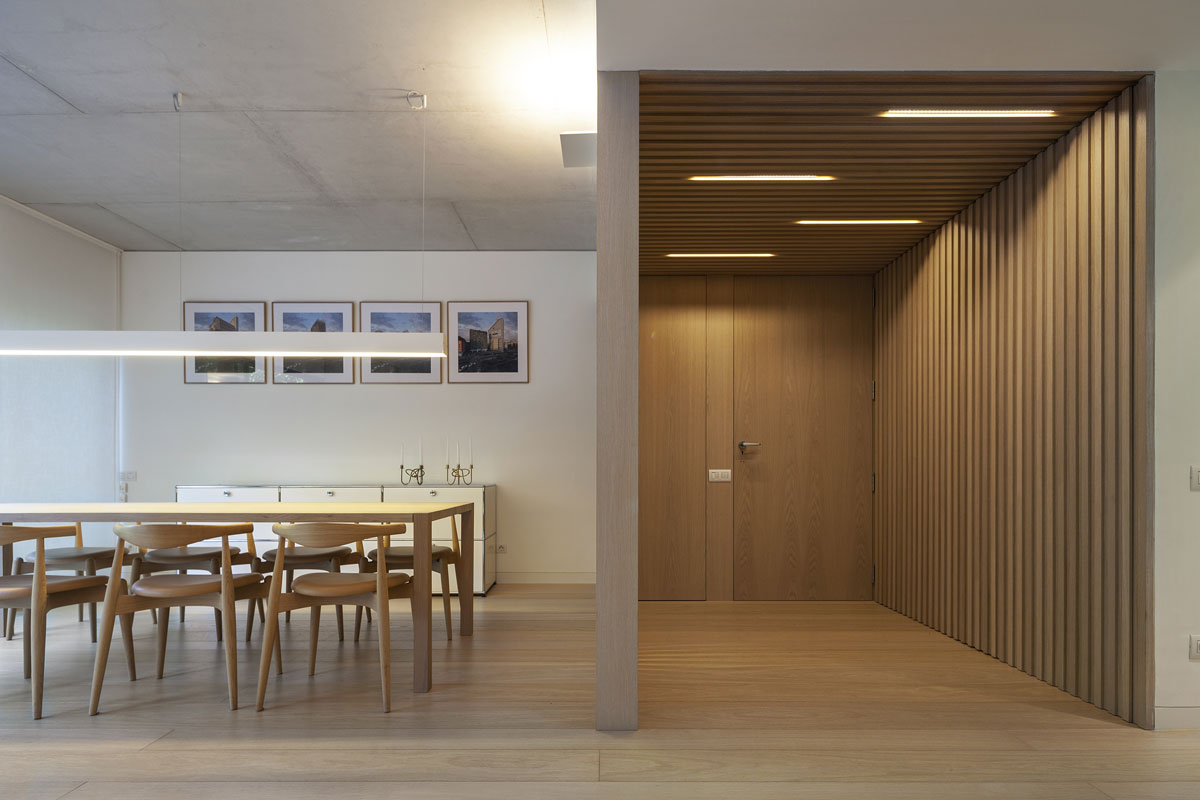 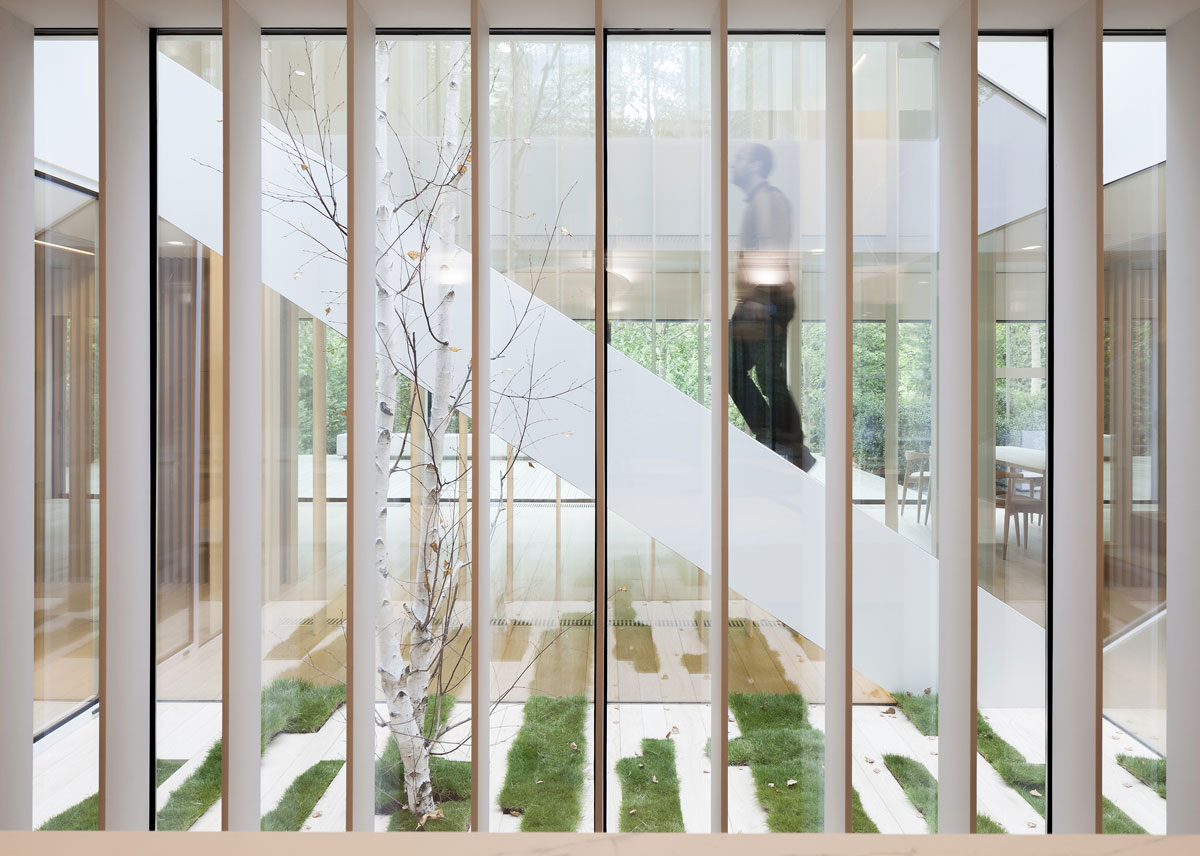 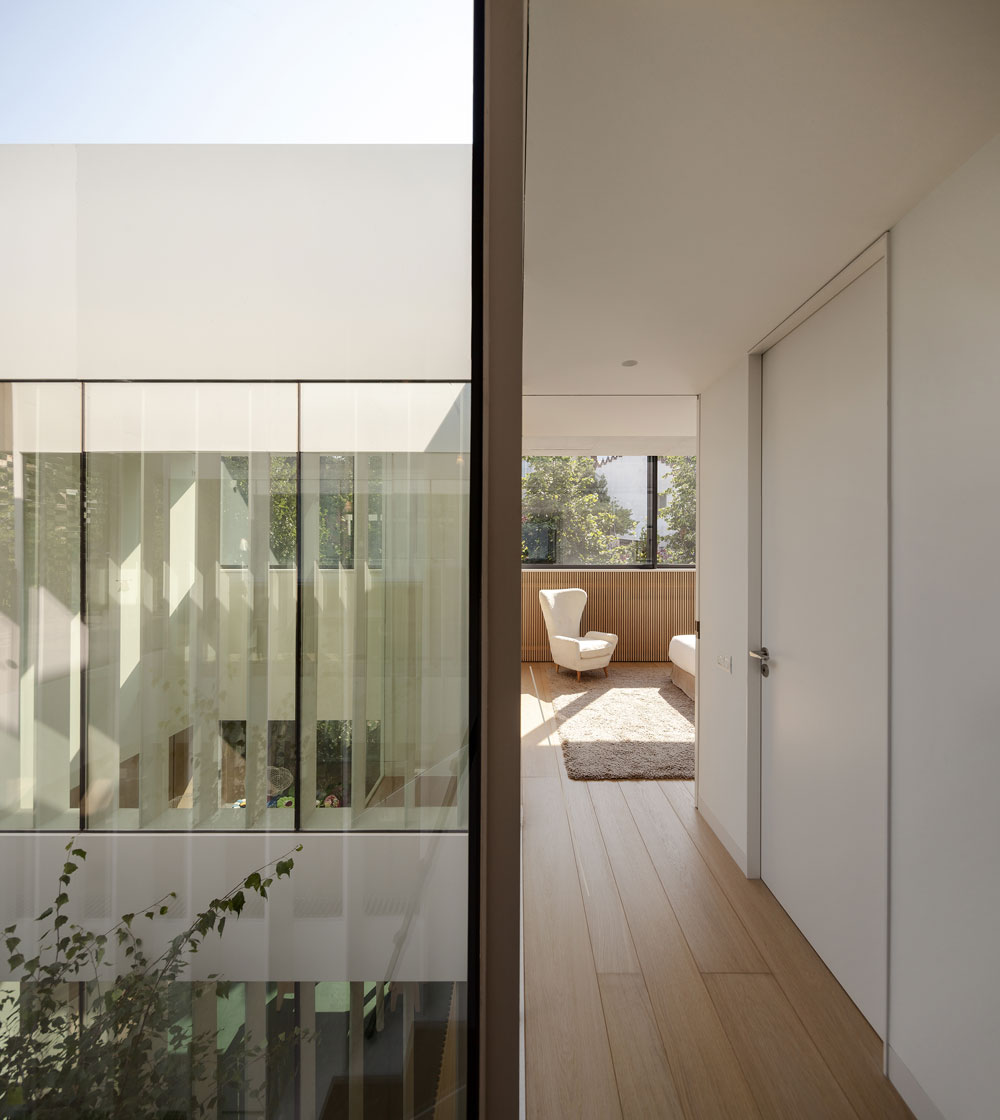 TR House Barcelona represents an innovative fully-functional exercise that achieves a clear dialogue with its surroundings while attending to the changing needs of its users.