The Village of Children: New Secondary School in Sauland

PPAG Architects has developed around 30 school projects in the last 10 years. These include pilot projects such as the Bildungscampus Sonnwendviertel in Vienna, which, with its open educational landscape consisting of clusters and marketplaces, far outdistanced traditional school building concepts based on aisles and classrooms. It became the symbol of a new understanding of pedagogy, the spatial manifesto of a complex and playful concept of learning.

In the meantime, PPAG Architects have become experts in educational buildings, and that goes beyond Austria. In 2018, in the programmatic exhibition “Of the New School” at the Architekturgalerie Berlin, they presented the state of their research at the panel of architecture and pedagogy. In March 2019, they won the competition for the new construction of the secondary school with a refined cluster model at the Allee der Kosmonauten in Berlin-Lichtenberg. 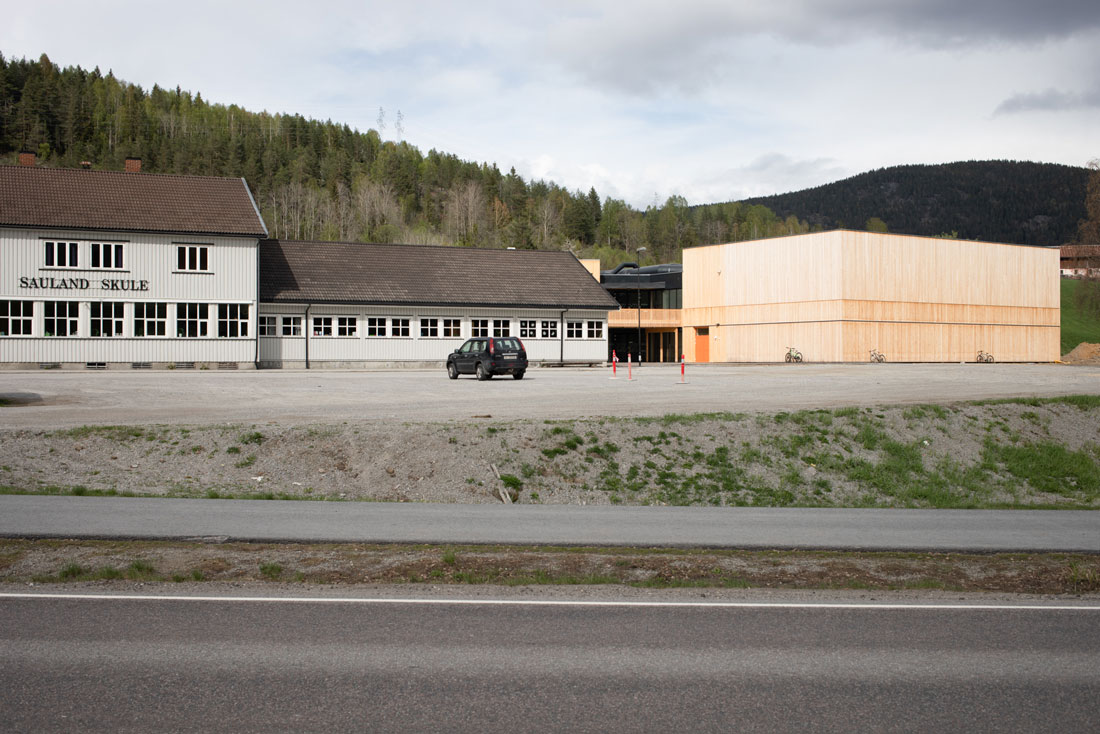 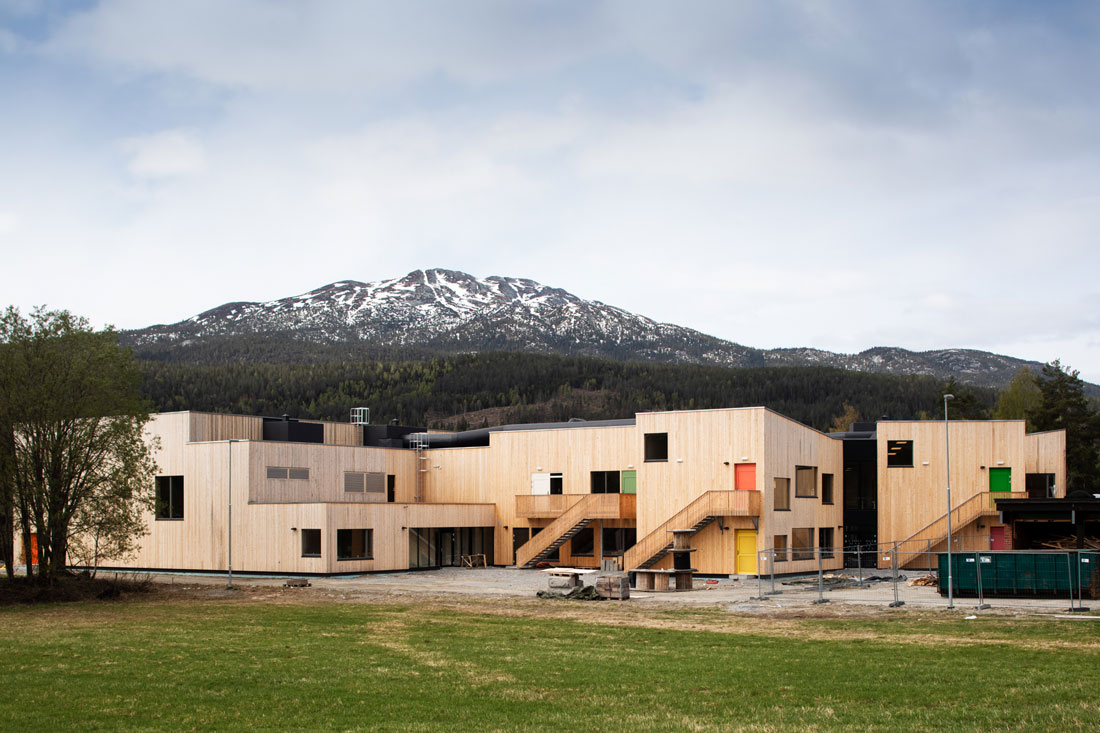 Sauland: One Village, One School

Sauland is a small community in the Telemark region, in the south of Norway. They had old school with a traditional typology – corridors, classrooms, frontal lessons – that was in need of renovation. Instead of renovating this school, the community of Sauland opted for a new building that would meet the requirements of the 21st century. Free learning and project-oriented teaching are in the foreground; frontal teaching is limited to a sensible level. It was the largest new construction project in the village for 20 years.

An application process resulted in a winning project, which was created in cooperation between PPAG Architects and the Norwegian architects Helen & Hard. Austrian and international school construction expertise plus Scandinavian timber construction expertise were the subject of a successful fusion. By no means was a standard design simply copied. Instead, a spatial structure developed by PPAG over the years was combined with the cluster system: a polygonal central space around which smaller rooms virtually rotate. “It is a geometric, spatial, socio-cultural and economic answer for the cluster school,” say Anna Popelka and Georg Poduschka of PPAG. 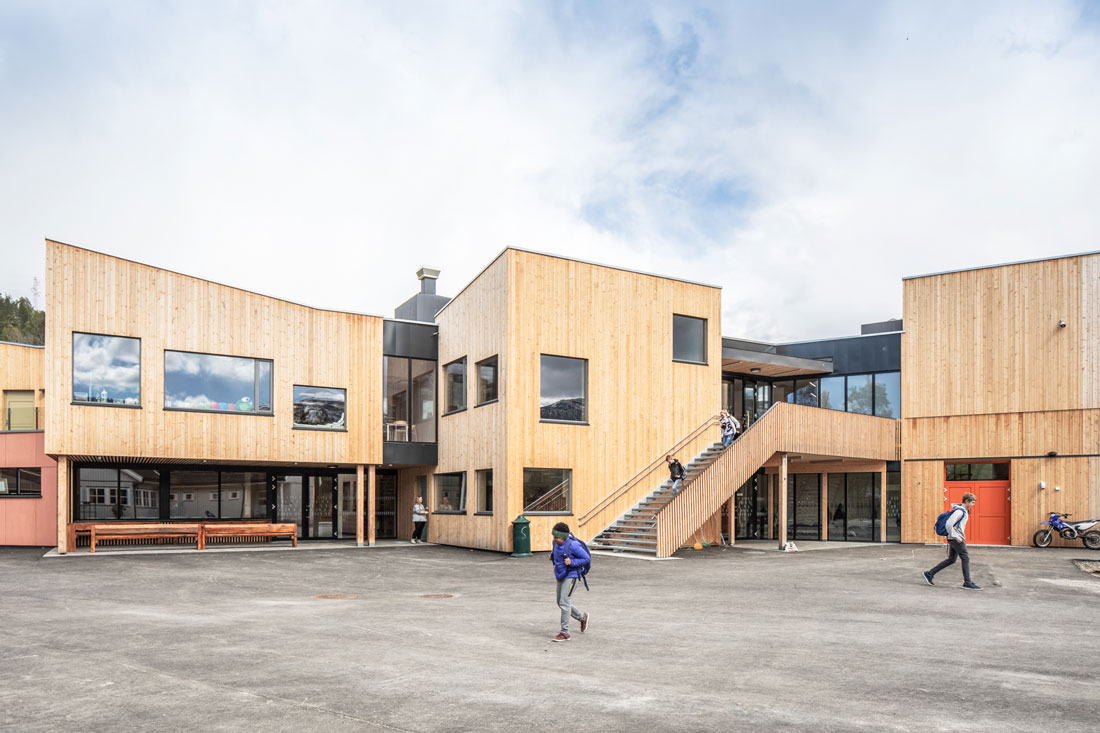 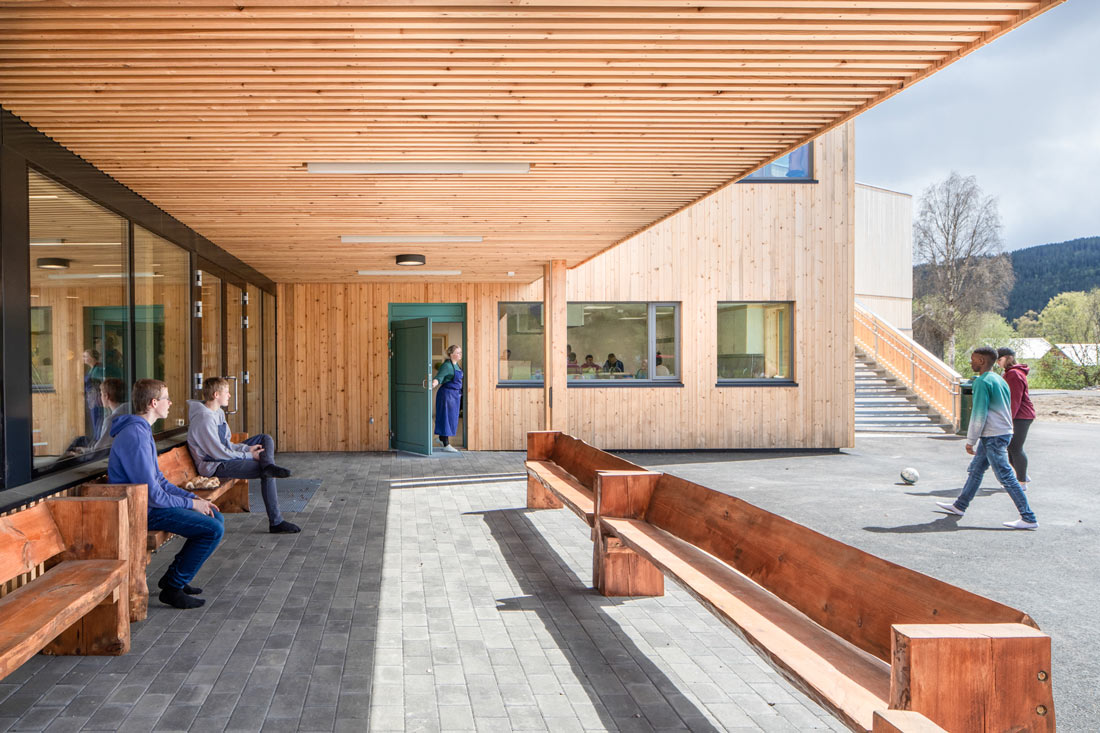 Learning Clusters: How the Village Came to School

The place and the architecture came together quickly and in an uncomplicated way. “We explained the concept of the cluster school only once in front of the assembled community, and the director said: ‘That’s exactly what we want,’” remember PPAG. What was unusual was that the teachers all started directly in the new rooms without any separate training in the new spatial concept. It came so naturally that the switch to the 21st century was not a problem. The manageable, rural size of the school building made this familiarity even easier. “The house radiates a potential of use that nobody can miss,” explain PPAG.

Another unusual aspect: the proven cluster model was applied here so that virtually the whole school is a single cluster, including all specialist rooms. It stands as a spatial symbol for a comprehensive education. 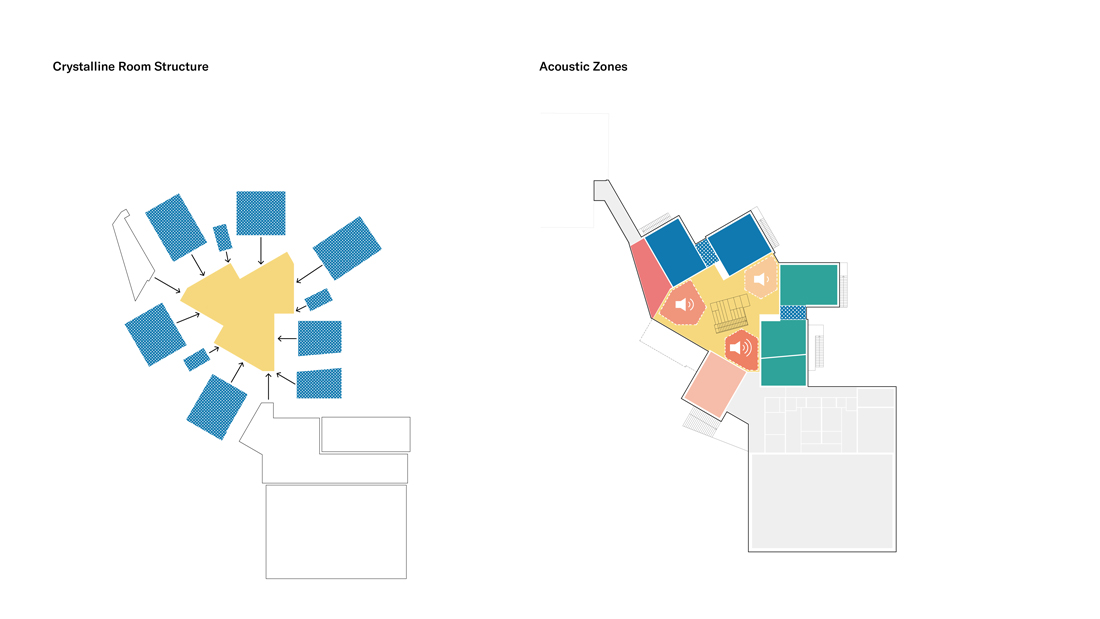 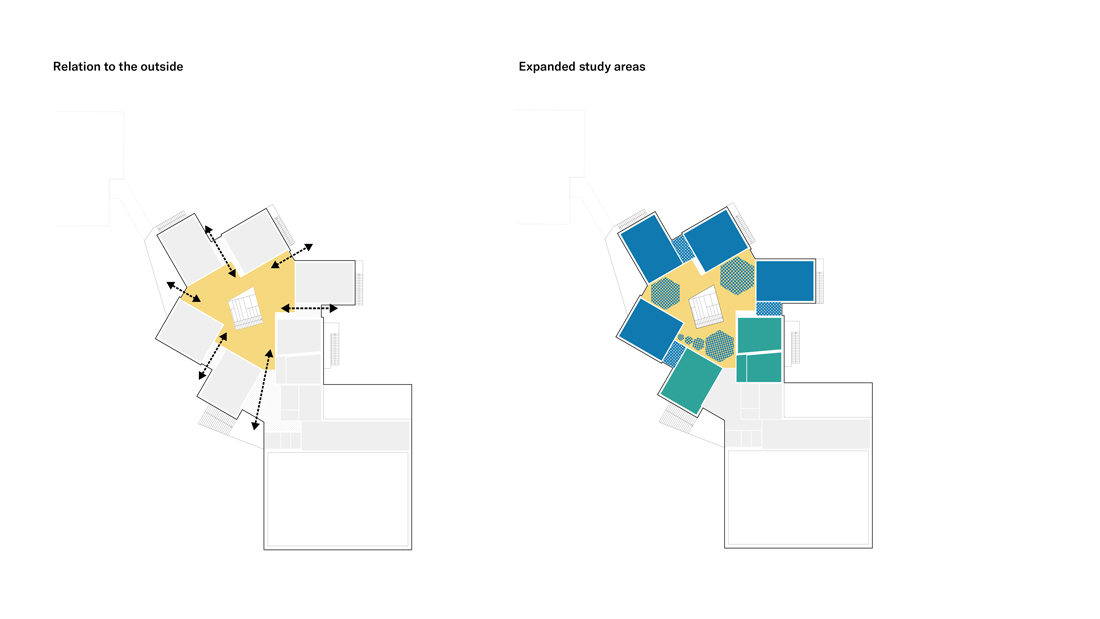 The Structure: The School as a Village

The village of Sauland and the surrounding hilly landscape are characterized by rural homesteads. This local typology also shapes the character and identity of the school. The new secondary school does not appear as a special element, but as an almost random grouping of houses. The size of the two-story superimposed classrooms corresponds to the wooden houses in the area. The terms front and back are becoming less important, and the building looks the same from every direction: friendly, accessible, open. 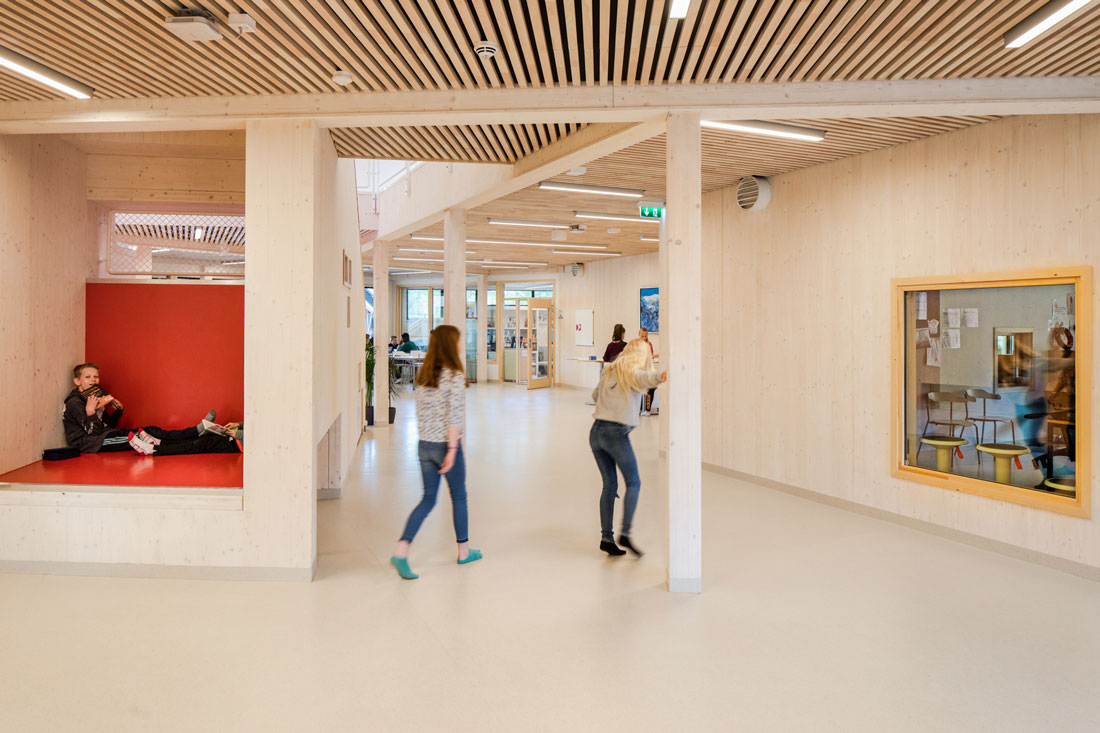 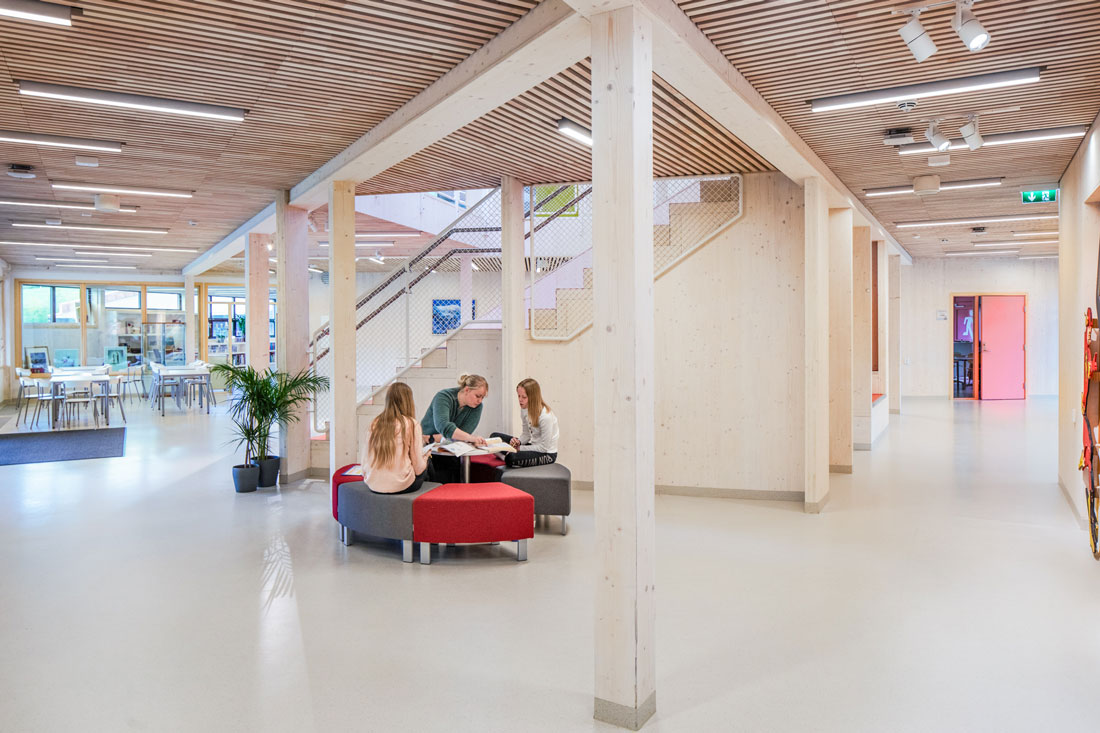 The aim of modern pedagogy is to encourage and to promote the needs, talents and interests of each individual child. The old system of 50-minute lectures in a class-sized group does not quite live up to this goal. The appropriate teaching methods – free learning and project teaching – are oriented towards small groups. Each group works on a tailor-made task, and the pedagogues act as supervisors who provide assistance.

This requires different spatial structures, in which each group finds its appropriate place and in which the often cross-age and cross-class cooperation of the students can function. The space in front of the classes is not a break room; it is used all day long as a central educational forum area. Students can study, read, gossip, while another small group in the classroom may be watching a French movie. Parts of the forum are designed as niches for small groups and can even be separated with glass doors. 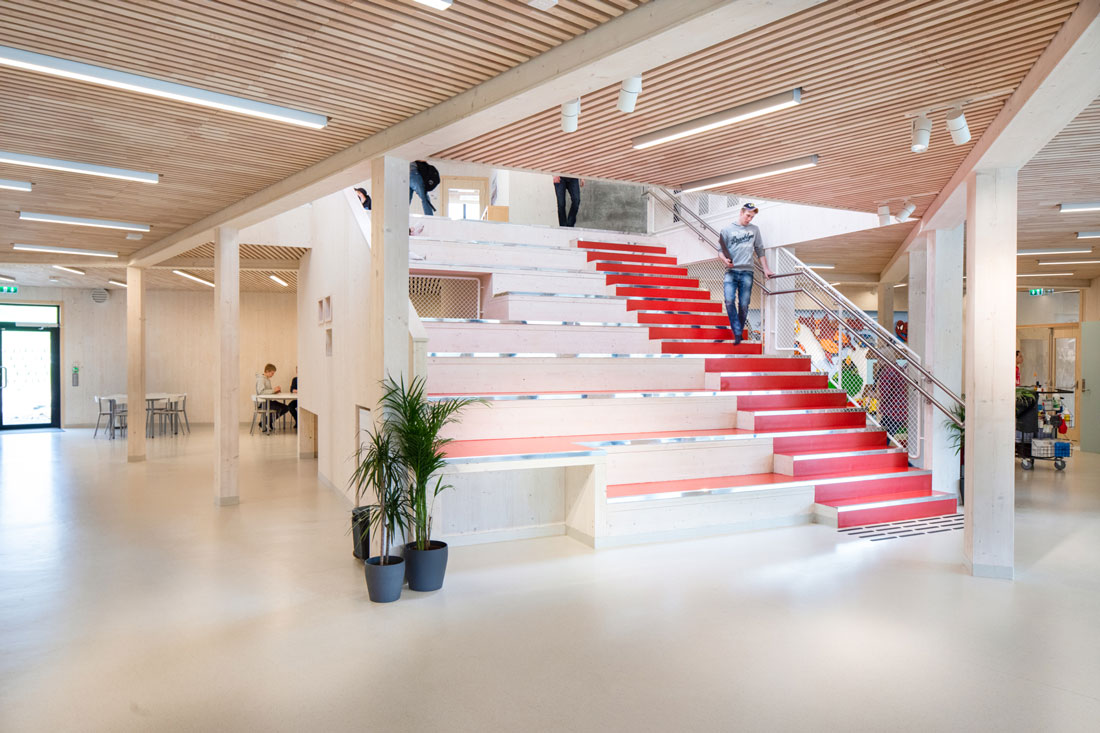 The windows inside and out are deliberately set so that they always show a certain section: be it the landscape or part of a classroom. The roof, the fifth façade, is perforated and light is directed toward the center of the building, the Forum.

The forum, though surrounded by the classrooms, has direct windows to the outside, views and daylight, thanks to the building’s rotational arrangement. The educational areas on both floors also have direct access to the outside. The concept of visual connections continues from the outside in: visual connections between the areas of use form the basis for an open lesson. There is an outward view, to the schoolyard and the surrounding landscape. Windows and niches allow the visual contact between the classrooms and common spaces.

A large, wide staircase in the middle of the forum – the only wish the school voiced to the architects – is also used pedagogically. It is equipped with niches, windows and shelves and also serves as a venue for general school assemblies or as a meeting place for the community. 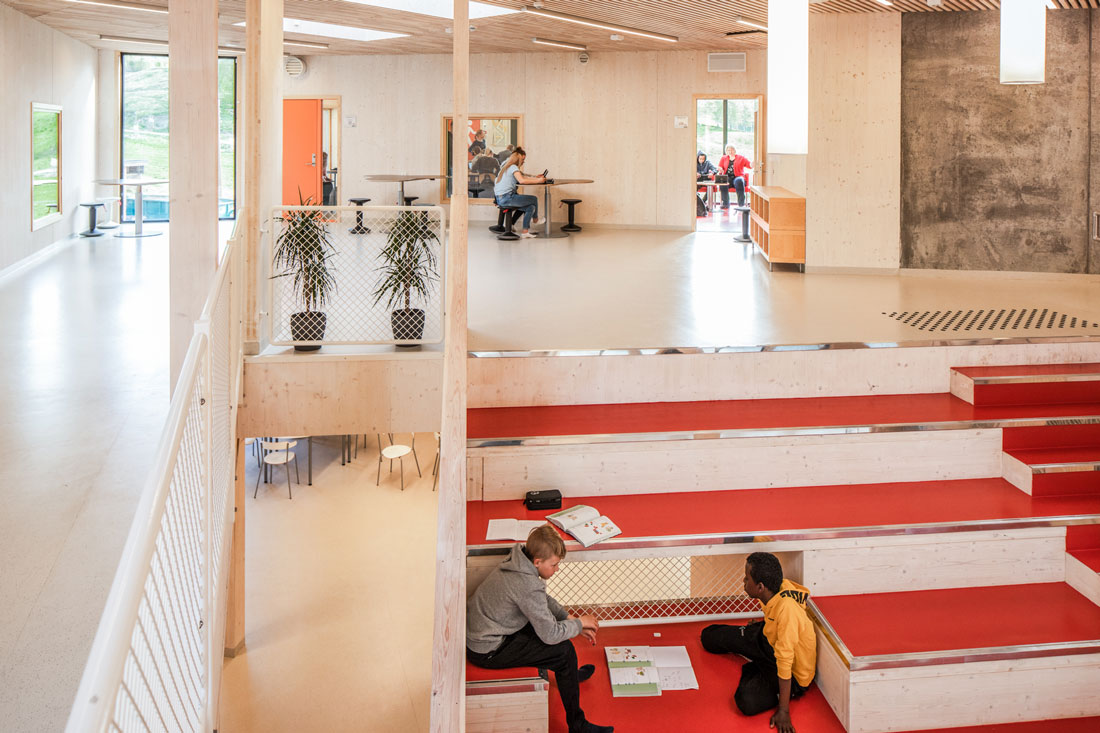 The Other Rooms: The Village in the School

The library on the ground floor serves both as an extension of the forum, and as a connecting element between secondary school and administration building. It is equipped with generous windows, both to the outside in the schoolyard and to the adjacent educational space.

The main entrance on the ground floor of the school is shared with the adjoining gym, which, in addition to its function as a sports center, is used as a multipurpose room as well as for out-of-school activities of the community. Meetings and parents’ evenings take place here, as well as informal gatherings outside the regular school. The central wardrobes are located in the entrance areas of each floor.

The arrangement of the teaching kitchen (ground floor) and the music room (upper floor) allows use for extracurricular events. The access to the study areas can be closed in these cases. All areas are accessible and barrier-free. 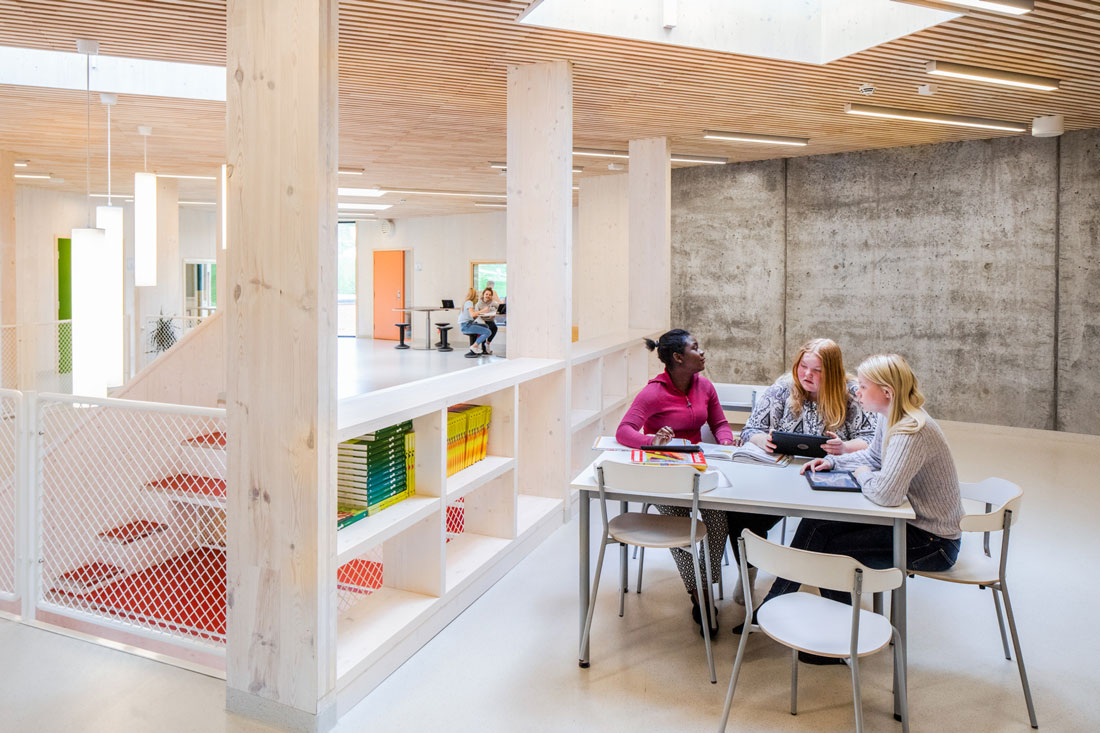 The Materials: A House to Touch

The majority of the school and the sports hall are executed in CLT (Cross Laminated Timber), solid wood panel construction. In the interiors, these elements are left visible. The hygroscopic nature of the wood panels regulates the humidity and creates a pleasant indoor climate. The atmospheric effect of the wooden surfaces encourages the children to touch the building, to sit on components, or to work. The house becomes a tool of pedagogy, a workshop of the senses.

The sound-intensive rooms (workshop areas on the ground floor and music rehearsal rooms on the first floor) are housed in a concrete core, which can be read through the exposed concrete surface in the interior. The façade is clad with vertical wooden slats. 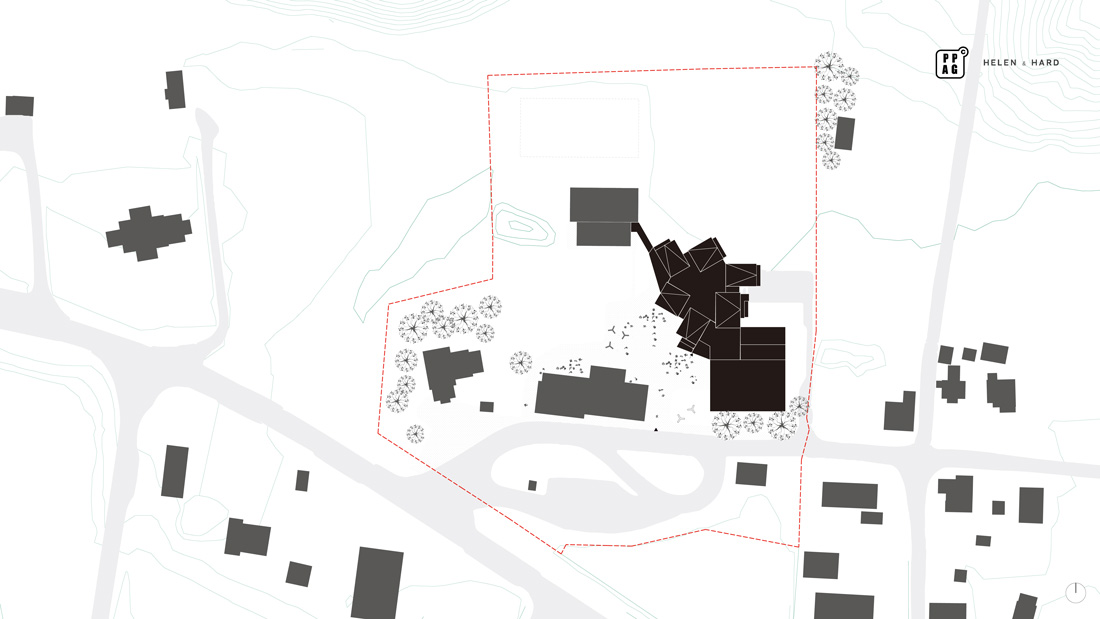