The School Grows: In Need of Extra Space

A Need as a Starting Point

The School Grows is a project launched at the Madrid School of Design [Escuela Superior de Diseño de Madrid] during the academic year 2013-14, in response to the urgent need for space. Since its opening in 2011, the school imparts degrees in Graphic Design, Fashion Design, Product Design and Interior Design.

Currently, the school hosts more than 700 students in a 1965 building, originally intended for 172. Considering the building had never been extended since its construction, it is not difficult to imagine how much it was in need of extra space. 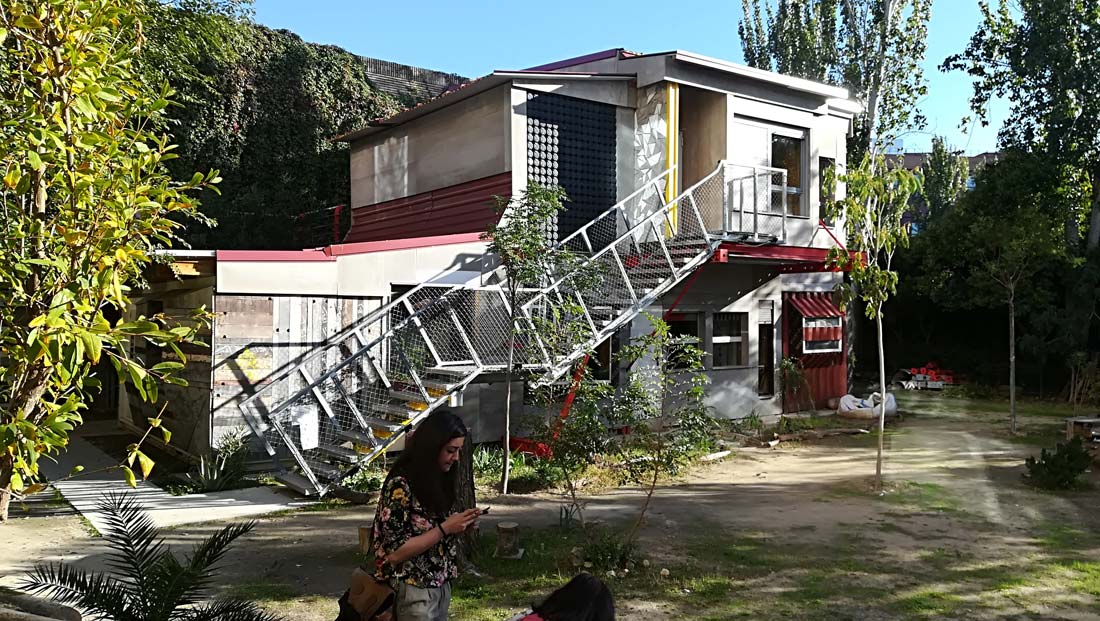 As a first step, the school turned to the educational authorities, since they were responsible for the situation and, thus, for finding a solution. Different proposals were submitted to them, including building an entirely new pavilion on the land belonging to the school, extending the current building or moving to a bigger place. All these options were welcomed at first but finally rejected due to a lack of funds.

The school then decided to address the situation using only its own human and material resources. It was suggested that the space problem could be made into a teaching activity for Interior Design students enrolled in a course on Prefabrication & Modular Elements. The ideas proposed by the students were submitted to different prefab unit companies, along with requests for construction estimates. At that moment, the school board and the lecturer in charge of the course had the same idea: Why not do it themselves and self-build the school? Through self-construction, a double aim would be accomplished: first, funds would be saved; and, second, the self-building activity could be turned into an educational opportunity from which a very valuable lessons could be taught. 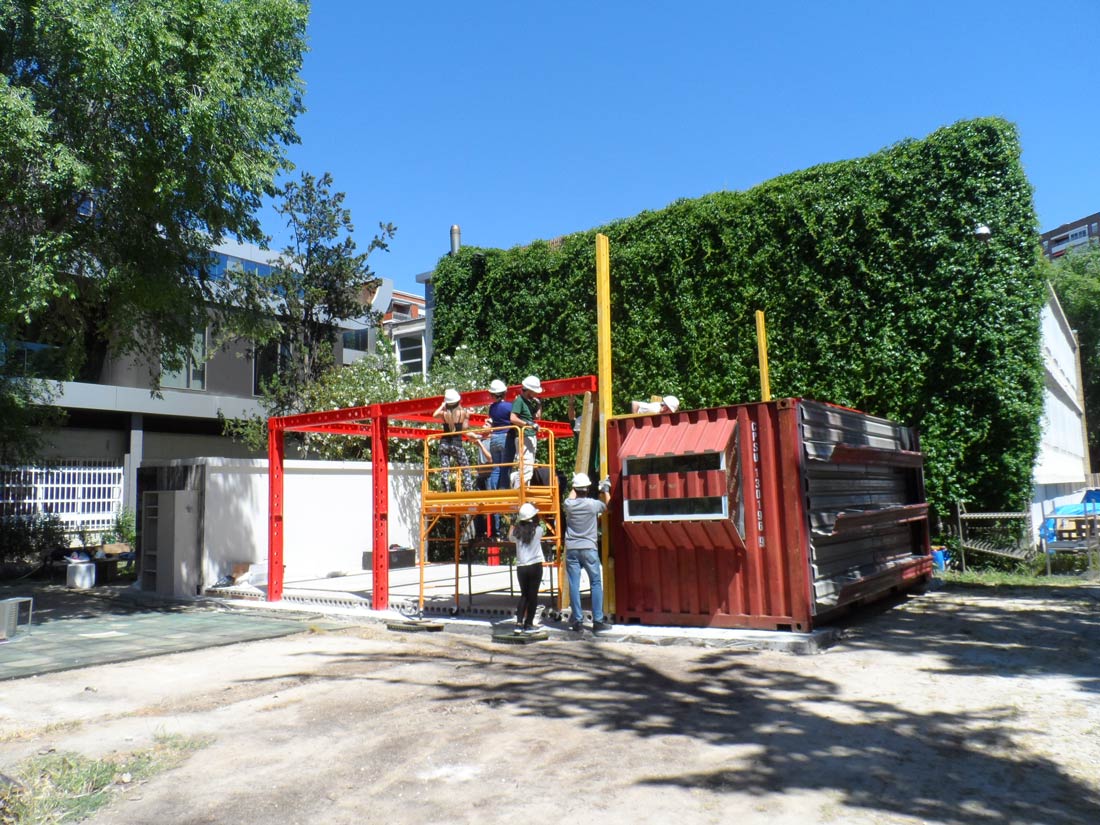 After considering the pros and the cons, before making a decision, the school contacted our office, Recetas Urbanas [Urban Recipes], and offered us the job of leading the self-construction project. This choice was not a coincidence. In addition to our extensive experience in self-building projects, we had collaborated with the School Arte4 before it became the Madrid School of Design.

Our answer was not long in coming, and we were very enthusiastic about the idea from the outset. A team of school lecturers was selected to manage the activity with us, and we got down to work.

In the subject line for the email in which we agreed to participate and invited the school community to get involved, we wrote “The School Grows”. It was the birth of a project that today involves more than 150 people. 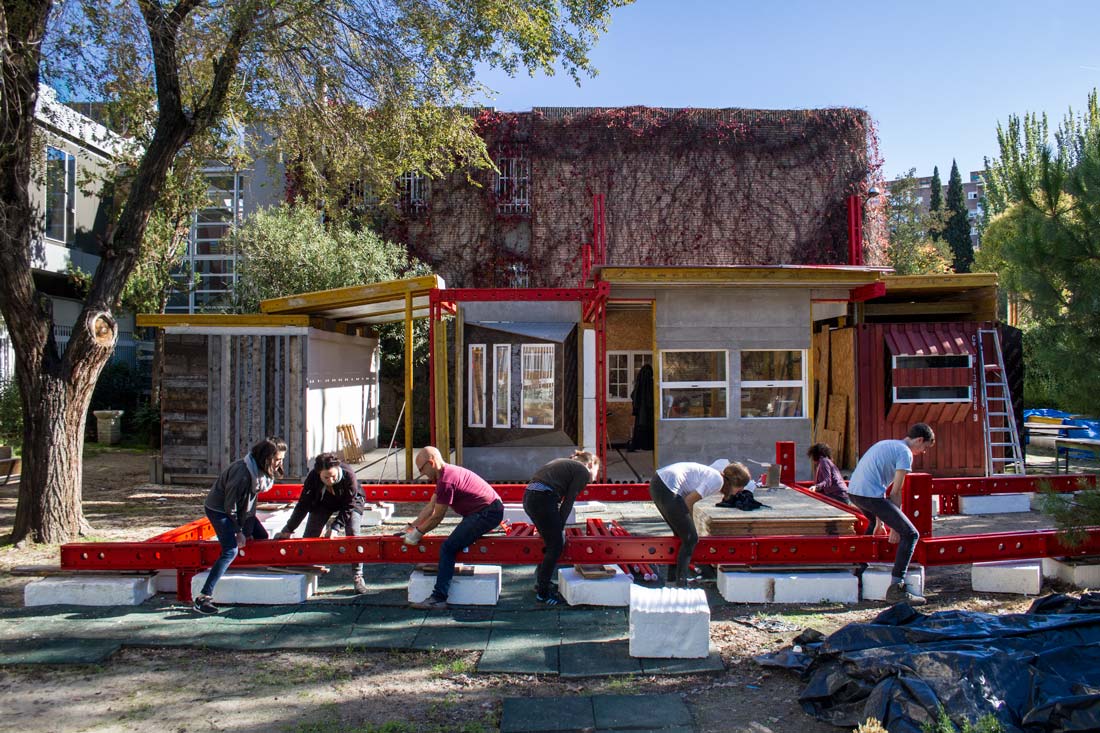 The proposed building extension included 170 square meters on two floors supported by the existing building, in order to save costs in the structure. We chose a construction system based on prefab units that we made ourselves, incorporating a dry installation with no need for mortar. As such, there was no need to hire companies to provide specialized services.

Both the structural system and most of the materials used were recycled.
It is important to note that the new building project was never conceived as a closed design but as a work-in-progress to be resolved as we went along. The design itself is understood, therefore, as a process in which the participants are not a mere work force that helps or carries out orders from above. On the contrary, they share in the decisions and the responsibility for what is built. 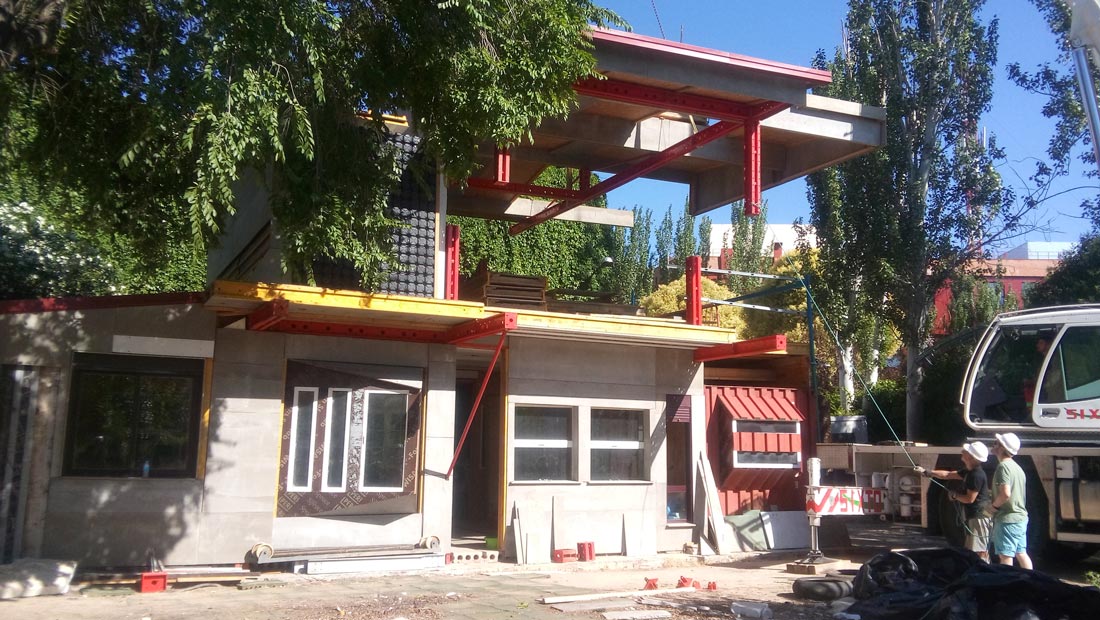 In order to not to interfere with academic activity, the construction of the new building is carried out through workshops that take place every fortnight. These workshops are usually three days long and are divided into morning/afternoon shifts. In this way, the students who are interested in participating can do so without neglecting their studies, since the school offers both morning and afternoon courses for the four degrees in Design. So far, 15 workshops have taken place.

This activity is now part of the school’s curriculum, and students are allowed to request that their work be included in their transcripts, counting for up to 6 ECTS credits in elective subjects. Attendance at the workshop is quantified in hours, which can be rated as ECTS credits at the end of the year.

Lecturers are also encouraged to include different activities related to the project on their syllabuses, contributing to create a space of collaboration with different levels of participation: anywhere from isolated participation in a concrete task – for instance, the construction of a particular element – to a more extensive involvement, such as the interior design for spaces in the new building.

Currently, the first floor is almost finished and so are the floor structure and closure elements for the second floor, as well as the roof. This has been possible, as we said before, thanks to more than 150 people. 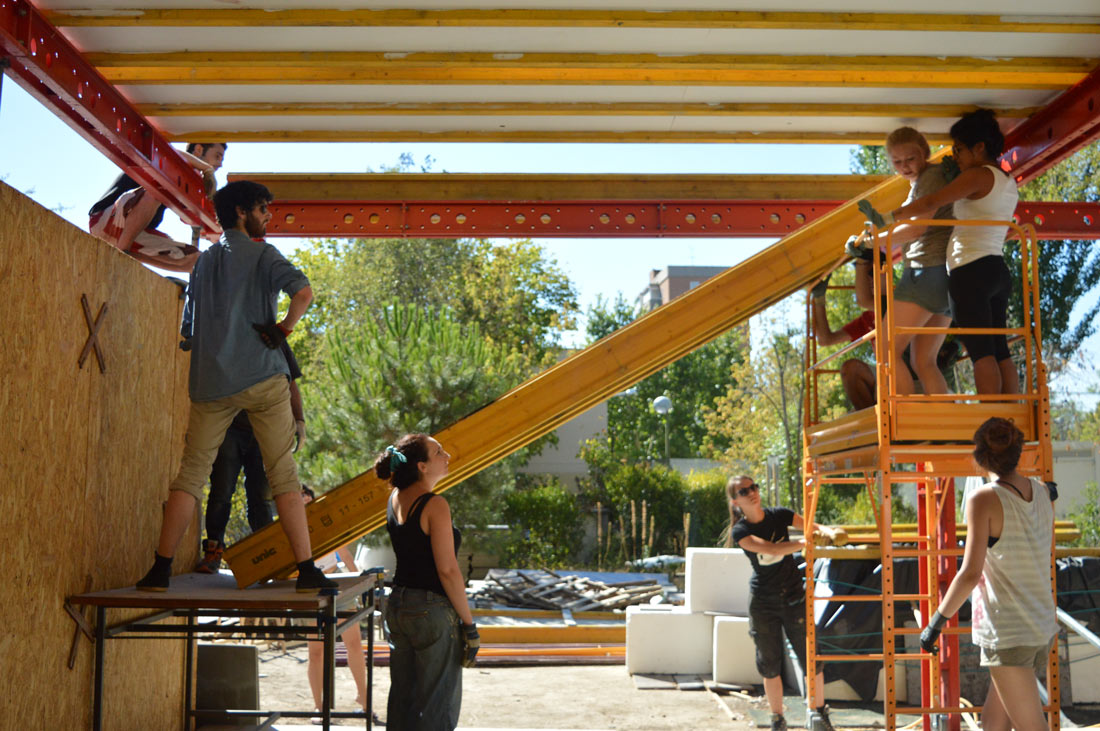 Over the years, the self-construction workshops have been attended by students and lecturers from Uruguay, Colombia, Brazil, Scotland, Switzerland, Canada, USA, Russia, France, Great Britain, Chile, Venezuela, Italy, Malaysia, Poland, Mexico, Germany and China, as well as from many cities and towns in Spain. As a result, on the one hand, we have become familiar with design programs and teaching methodologies from all around the world and, on the other, we have been able to make our school project known to a wider audience.

This fruitful transfer of theoretical background and practical knowledge has gone beyond the educational community. The School Grows is open to members of groups, associations and non-academic professionals from different fields, who are willing to participate in this co-working experience. We have been fortunate to collaborate with a team of developers who designed an app for better managing collaborative work, engineers and architects interested in “thinking-through-doing”, journalists, and photographers and media editors committed to communicating and disseminating the project.

Finally, since the beginning of the project, we have had the efficient cooperation of the school administrative staff. Both the administrator and the secretary have been involved and have handled the accounting for the workshops, despite an increased workload. Otherwise, these workshops could not have been organized so easily. The cleaning staff has also made a big effort to keep the building clean during the work days, even during the excavation of the foundations. Maintenance staff and janitors have supported us by unlocking gates, delivering orders, tools, support facilities, etc. 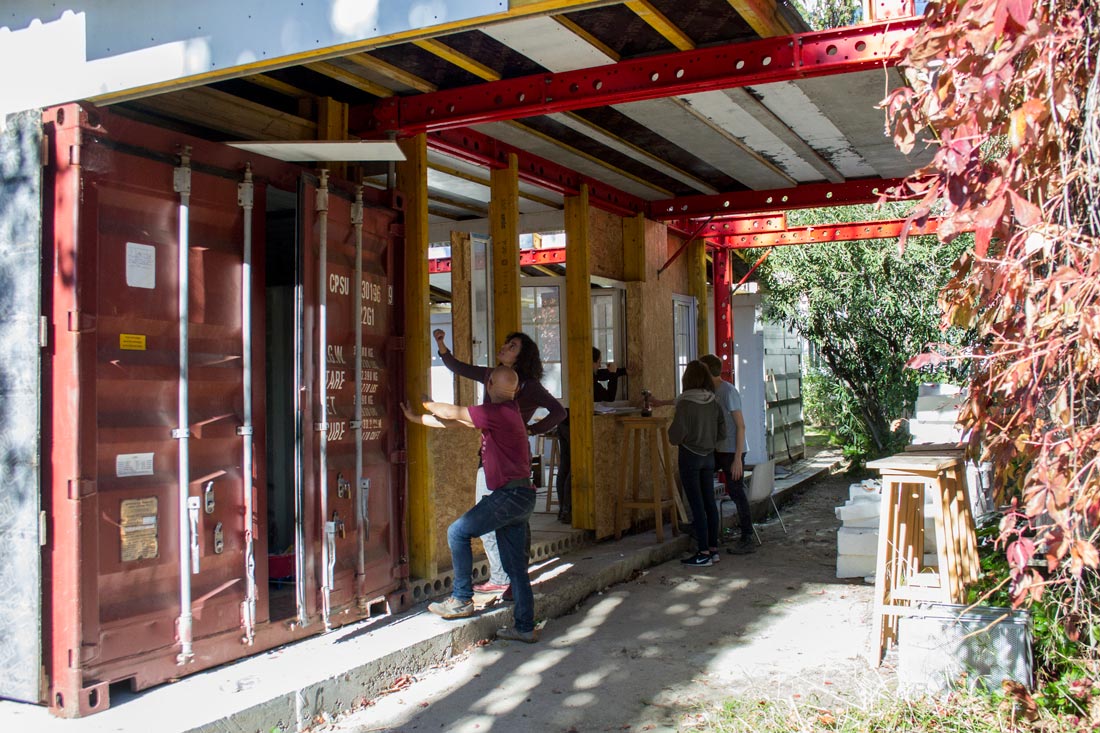 Summing up such a complex experience in a few lines is a difficult task, and some details have to be left out. We cannot fail to mention some of them, however, before concluding. This extension projects has made us look ahead to the future, but it has been also necessary to look back to the past and rediscover our own history. We have learned about the origins of the school, its changes and transformations in adhering to the different educational curricula, and now we understand better the place we inhabit, the district of Madrid where the school is located and its history. We have worked together for more than a year and a half, and we have celebrated by sharing good food and drinking a toast to our achievements. Teamwork has been organized to disseminate the experience through flyers, social networks, websites, media, etc. A landscaping workshop has also taken place with an eye to arranging the landscape around the new building, and another workshop focused on the design and manufacture of furniture is forthcoming… And, most importantly: we can assert that the educational community is today fully accustomed to everyday cohabitation with construction work: they feel that the work is something of their own. New bonds have been forged between people, beyond their academic and professional roles. The search for a new physical space has thus made possible the creation of a new human space which, in contrast to the former, has no deadline and will continue to produce learning opportunities in the future. At the School of Design we are building new spaces but also new and different ways of growing and sharing knowledge.