The Place that Remains: Density and Insularity

Considering the specific geography of Lebanon and the density of our built environment, the idea of Freespace of the Venice Biennale 2018 has been translated by Hala Younes, the curator of the Lebanese Pavilion into ‘The Place that Remains’, thus putting emphasis on the un-built spaces, their qualities and their potential.

View from the Lebanese Pavilion at La Biennale Architettura 2018.

Lebanon is an overcrowded place. It is one of the most densely populated countries in the world in a region plagued by war and political instability. This situation of extreme vulnerability is bound to call to mind a century earlier when the crisis and isolation had led to the Great Famine of World War I. It makes us contemplate the narrowness of our territory and the scarcity of its resources. The singlecrop farming of mulberry that took over Mount Lebanon then, in addition to the locust devastation and war blockade of maritime and land routes, had caused one of the greatest tragedies of our history.

On this gruesome commemoration, it is time to evaluate the situation of our territory. The past silkworm-rearing that had taken place at the expense of food agriculture, has been replaced by the real estate market; agriculture is abandoned more than ever, and building seems to be the only purpose for any space.

One century ago, Lebanon had suffered the early repercussions of globalization. Today, with the refugee crisis, it is suffering its latest aftermath before the big reversal that seems to be taking off namely, the re-emergence of national identities and the reification of national frontiers.

In such circumstances, we have to assess the resilience of our territory – its capacity to shelter us. We have to evaluate the place that remains, the place that would still host our dreams and expectations. This place that still remains is a precious resource for creating a meaningful territory and allowing its poetic appropriation with a modern spirit or point of view.

At the moment, the territory takes the form of an urban sprawl unreasonably diffuse, and informal. Its underlying logic cannot be understood solely from the morphology of the objects built or the shapes of the corresponding networks, because the underlying bedrock is not unruffled – it is loaded with tensions and with different narratives and promises.

The “urban” flows along routes, like water that rushes filling all empty spaces, even tiny interstices, by gravity. The logic of real estate development seems clear: to build closer, faster, higher! And as visible as possible: before the others, in front of the others, and above the others. Nevertheless, this is not enough to figure out the shape and motives of the new city.

The objective of this exhibition is to provide an alternative perspective on the urban reality through identifying the ‘unbuilt’. Instead of pinpointing the driving forces of this sprawl and the forms it can take, the project aims at shedding light on the logics of inertia and resistance that may channel or divert the urban sprawl. It aims at identifying the unspoken in the urban discourse.

The project implicitly reveals the urban pattern -between the lines- within the blanks of the built etching. It draws the powerful invert image that hosts the telluric forces of the territory. This image is made up of steep, slippery and loose terrains, deep and incised valleys that are murky and inaccessible, and windy and misoriented slopes. It is made up as well of industrial backyards, polluted grounds, abandoned quarries, and remnants of huge infrastructures left behind. There are isolated landlocked and useless territories, agricultural wastelands, lost and forsaken villages, and those that are drowning in the city. But there also exist cherished common spaces, where the ownership is unclear, and those places that are too precious to be built at the moment, thus protected temporarily through speculation. All of these diverse spaces comprise multiple resources and breathe the same winds of freedom.

The project we ought to build aims at identifying and putting together those fragments of our country, thus refurbishing what is left -those forgotten treasures in the folds of the territory- and weaving the canvas of the future. This project for the 16th Venice International Architecture Exhibition is a first milestone of identifying and highlighting these places that remain.

The Place that Remains

The project explores the preconditions for architecture through an assessment of its bedrock and its main challenges: the fragility of the territory, the scarcity of its resources, and its commodification.

Accordingly, the territory has to be rendered visible, and the tangible/sensitive reality needs to be brought back to the center of focus, whereby it becomes possible to identify, inventory, list, and shed light on the Place that Remains and the conditions for its preservation. The exhibition formats include a 3D relief map, landscape photography, and video aerial surveillance.

The setting is a river watershed, so as to bring back the natural resources in the focus of attention. The historical perspective covers over a century of capitalism, from the Great Famine of 1917 until the “autophagous territory” of today entangled in a suicidal logic of productivity.

There is an urgent need to question the preconditions for architecture in Lebanon through an indepth assessment of the territory and its relentless commodification. A century on from the Great Famine that depopulated Mount Lebanon and comprised one of the reasons for establishing Greater Lebanon, today all of the territory produces nothing but real-estate income. The whole country seems to be for sale, entirely destined for construction, every inch of land is gradually being overrun by by the homogeneous fabric of the real-estate economy, which swallows up the land, levels it, and normalizes it according to a relentless logic of productivity. In this way the actual territory is losing its meaning, becoming no more than an abstract “unbuilt” space, a continuum to be built. Restoring meaning to the land seems to be a prerequisite for building it.

The land expresses the perceived reality: it shelters, nourishes, and is notably tangible and concrete. The memory of the Famine, and the choice of material for the exhibition, serve the objective of accentuating this perceived reality, thus making the land visible and eliciting an awareness of the vital and corporal dimension of the ground beneath our feet.

In truth, not everything has been lost, certain territories have resisted: slopes, isolated plots, landownership legalities, or historical heritage, have meant that large parts of the territory have been put on hold. In the absence of planning, the forces of resistance, the obstacles, and inertia, are all that currently give form to the city; a form made by default by “the place that remains.” Identifying and securing those places that remain is a challenge, a challenge of reconstructing with the apparent haphazardness of the void what has not been done with the rational and the built. Thus, it is a matter of bringing these places into focus and shedding light on their potential. This requires an inventory of the places that remain.

The equipment employed in the exhibition relies on several formats that traditionally reveal the nature of a given territory: the 3D relief map, photographs of the landscape, and video surveillance. Before modern mapping technologies arrived, the topographic map was considered a form of strategic armament, whereby the geographical knowledge acquired became classified data reserved for military use. Contributing to the exhibition is the Directorate of Geographic Affairs of the Lebanese Army, to demonstrate that geography is not only meant to serve in warfare as denounced by Yves Lacoste in 1976. It helps recognizing the fragility of land, the spatial continuities that traverse it, and the interdependence between our action and the capacity of our territory. Geography reveals the land’s finitude, its scale, and its limits. The photograph of the landscape, through the blinkers that frame the setting, selects what needs to be said, and what needs to be seen; it expresses the preoccupation and the taste. It expresses the cultural dimension of a certain territory; it makes up ideal landscapes, heterotopias.

The video relates the momentum of the territory through time, it recounts how the territory is being lived or experienced, that the land is a dynamic entity, and remains there at the beginning and at the end of our own life-cycles, it is both nourishment and excreta. Although, thanks to modern technology, today our every action and gesture is geolocated and subject to surveillance, cynicism aside, this hyper-scrutiny of its denizens has made the territory more legible than ever. Along the same lines of the military topographic map, the surveillance drone video is one of numerous arms of state control. Here we have repurposed it, in order to reveal the living throb of the inhabited territory, its pulsations.

The choice of the river catchment area amply supports this idea of a territory being something vital, alive. By framing this watershed, the 3D relief map once again puts water and its continuities at the heart of territorial logics. The valleys of Mount Lebanon are inhabited along the flatter areas and ridge lines, while the slopes that are too steep are left vacant, serving as backyards of sorts, places forgotten and ignored. Today however, they return to the fore as essential parts of those yearned-for places that still remain, parts now most at risk.

The watershed of Nahr Beirut has recently been the focus of several pioneering studies related to territorial policies and landscape preservation. It constitutes one of the last remaining territories in the immediate vicinity of Beirut that have been (relatively) spared from speculation. It was the presence of the Syrian army in this area until 2005 that had kept urban development in check. However, during the past decade this territory has been undergoing significant mutations. From both sides of the watershed, the summer resorts are expanding along the two ridgelines and approaching each other at the foot of the mountain range. Along the slopes, on the relatively flat areas, the old towns that are bypassed by the new main roads are struggling on their own. Their agricultural fringes lie fallow indefinitely. The bottom of the valley has been forgotten. Pine forests that are a feature of an old rural abandonment seem to be expanding; in some areas they are left untouched because of landmines remaining from our past wars.

A century after the Great Famine, the valley of Nahr Beirut, similar to other areas in the country, seems to be an “autophagous territory.” It stretches from the high karst plateau that has been excavated to create an artificial lake, and stretches seaward to an ever-expanding landfill of silt and effluent at the shore of the Mediterranean. This limb of waste material is a growing token of all the secretions of the city. Thus, the logic of profit eats away, gouges out, and effaces the territory, creating a sort of avatar of the land: a dry even ground, flat and marked out into square parcels of terrain that ironically remain unbuildable.

How can this collapse of the landscape be contained if not through cultivating a deeper appreciation of the reality of this natural heritage? An awareness that ranges from the most telluric down to the tiniest feature, and even the most anecdotic; this is the objective of the exhibition. 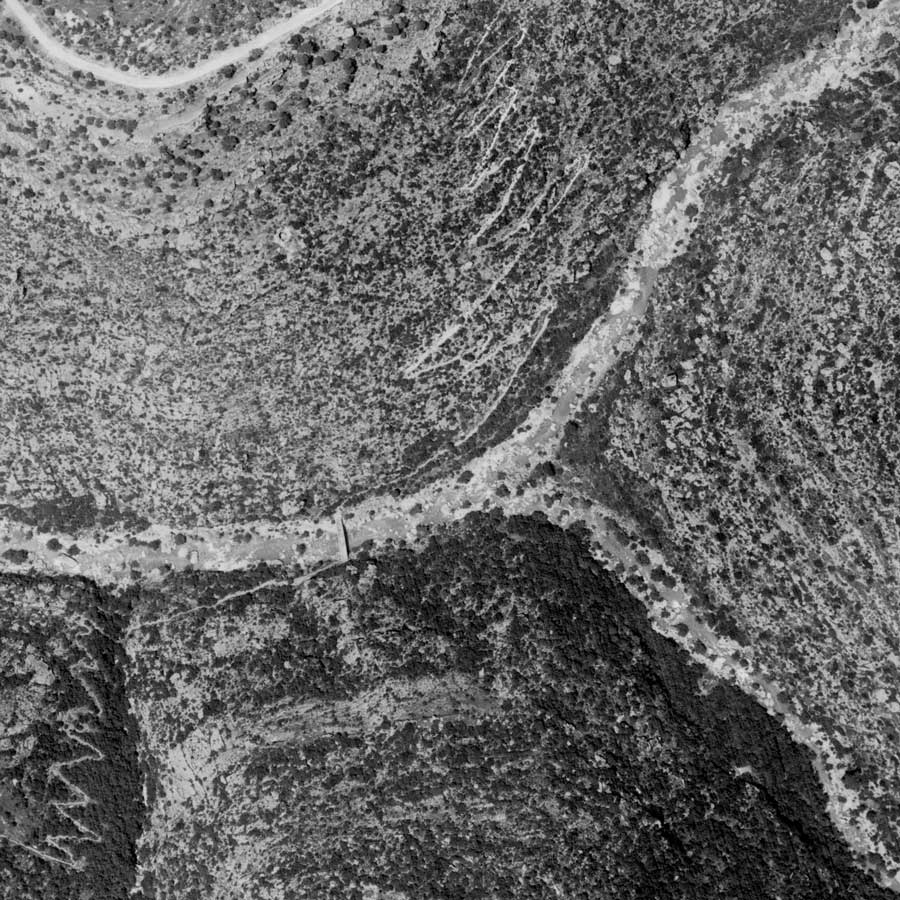 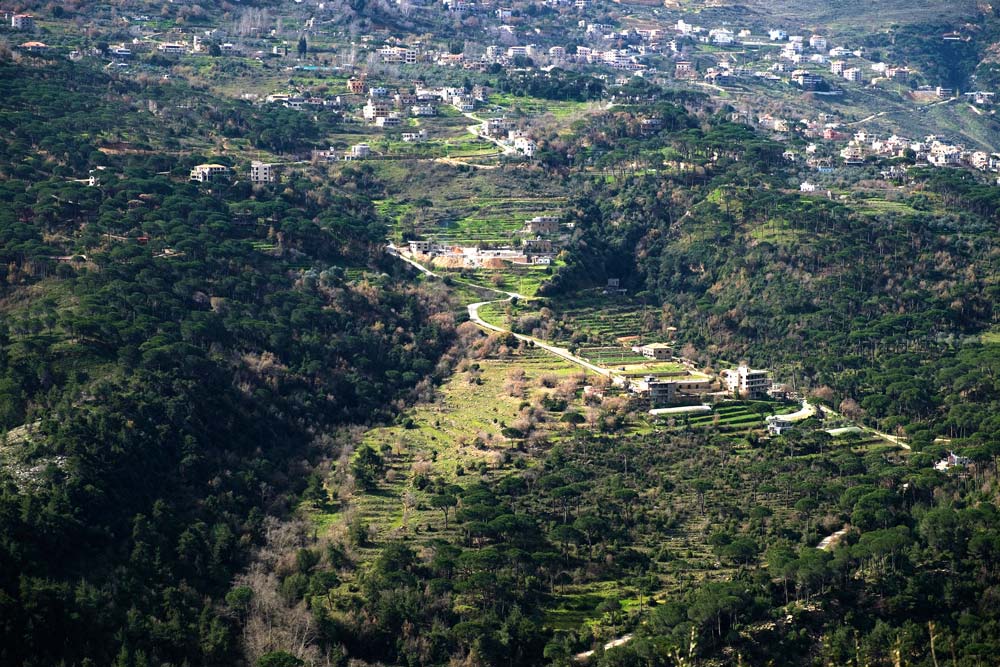 Catherine Cattaruzza, The thin lines between the river and me, 2018, courtesy of the artist.