The Form of Wander: A Tree-like Structure

Where the Riverfront Park recreational space extends onto the waterway, Form of Wander is situated to host new outdoor activities and new memories of the Tampa’s active waterfront. As an inverted mangrove, the green-hued aluminum canopy announces itself among palms as a signal on the Hillsborough River. The tree-like structure appears to float between water and land. 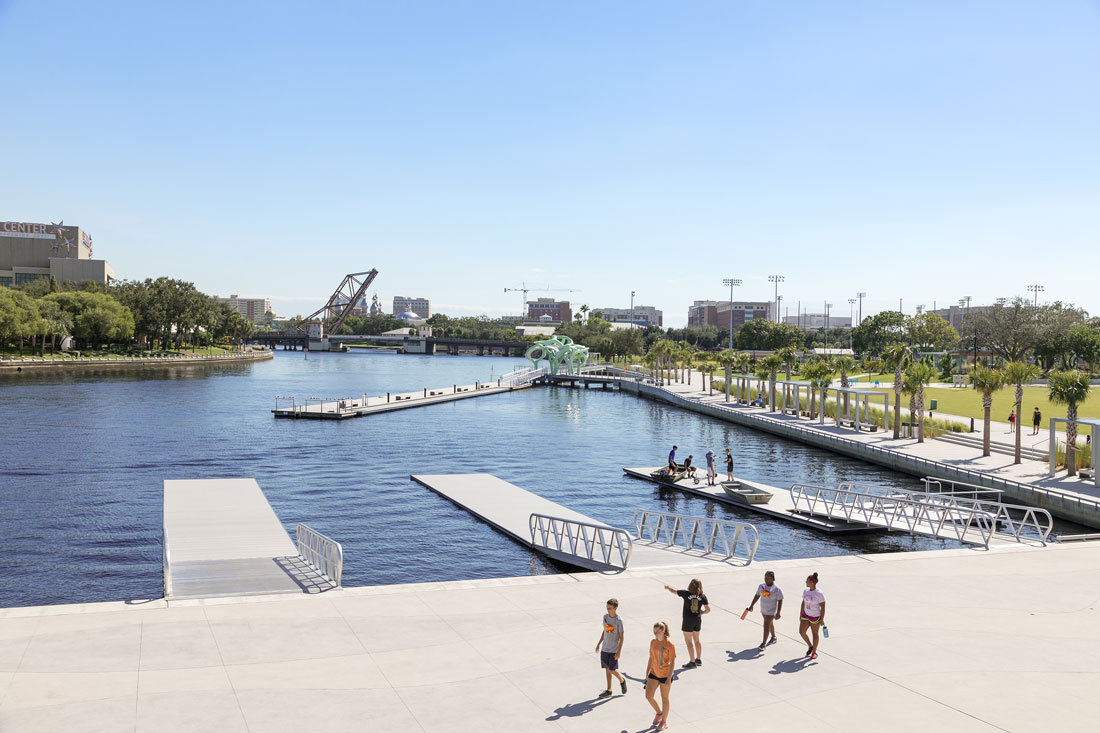 Seven trunk-like columns straddle this path onto the water, inviting visitors to walk around and through on a winding path. They thrust up into a tangle of branches, not unlike the root structures of mangroves which take root along Florida shorelines–part of the resilient ecology, evolved to withstand hurricane force winds. 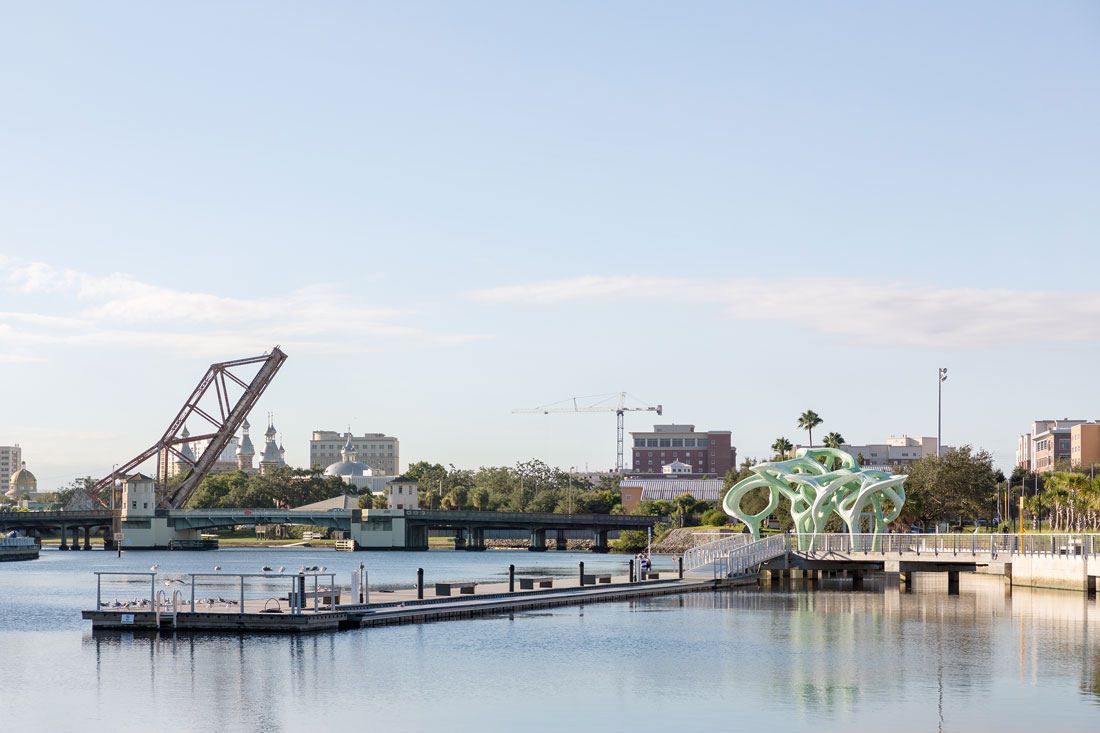 An atmosphere of filtered light and reflected currents is to be found there, under faceted members that split, arch, and recombine to produce an open network. Gradients follow linear stripes pale green to brilliant white, which alternately highlight cantilevered edges and shadow the interior portions. Somewhere between the natural and the iconic, the piece is identifiable on the riverfront, regardless of the direction of approach, but emphasizes the greenery to be found on the newly opened Julian B. Lane Riverfront Park. 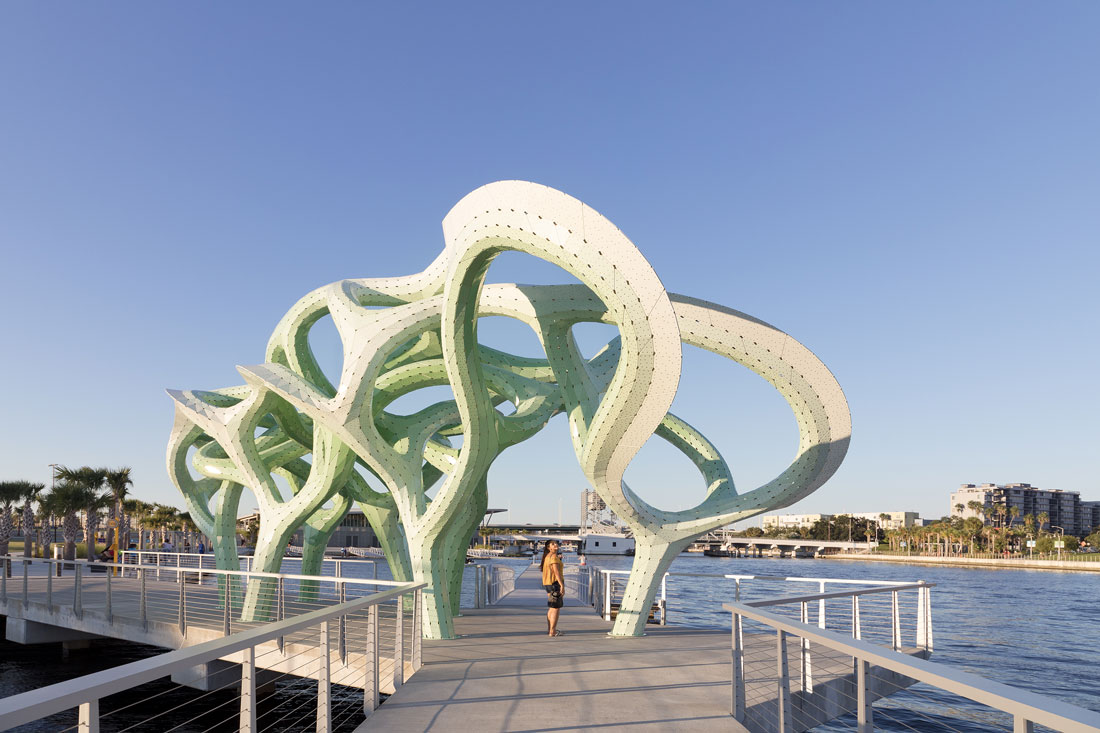 A destination for your Sunday stroll, a meeting point for your morning runs, an obstacle course for games of tag — Form of Wander is an experience as much as it is a signal on the horizon. From within its boughs, the structure performs as a framing device for the surrounding landscape, both heightening the scenery and providing new visual access to it. 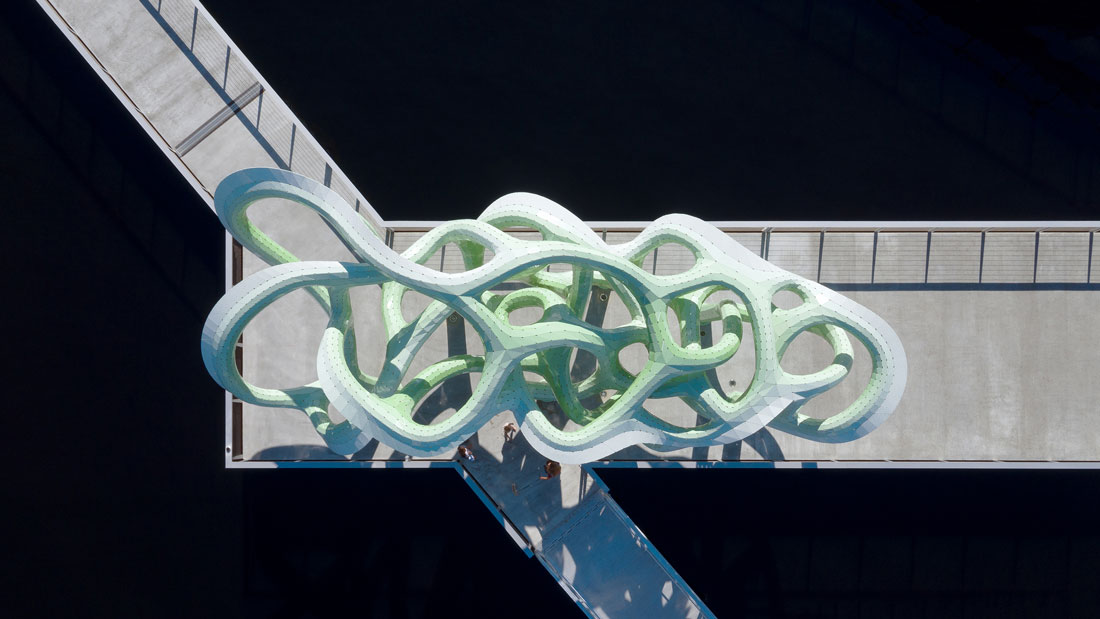 In the tradition of 17th century french gardening, this form of movement directly translates to landscape design. The allée is a feature of the formal garden, where a promenade of manicured trees would frame views and allow for leisurely strolls of French courtesans. Seemingly carved through a wooded grove, the perspectival quality of the allée emphasized the extension of the path, as stretched on toward a point on the horizon. Aspects of this landscape live on in public parks in Paris, but the changing fashions in French garden design eventually veered from the straight allée to meandering pathways through old growth trees.

These qualities and the experience of the leisurely walk can be found across other architectural references. We see it echoed on the boardwalk, the pier, the streetside promenade–all places that provide for a pace of walking that gives way to pause, reflection, and wavering affections. 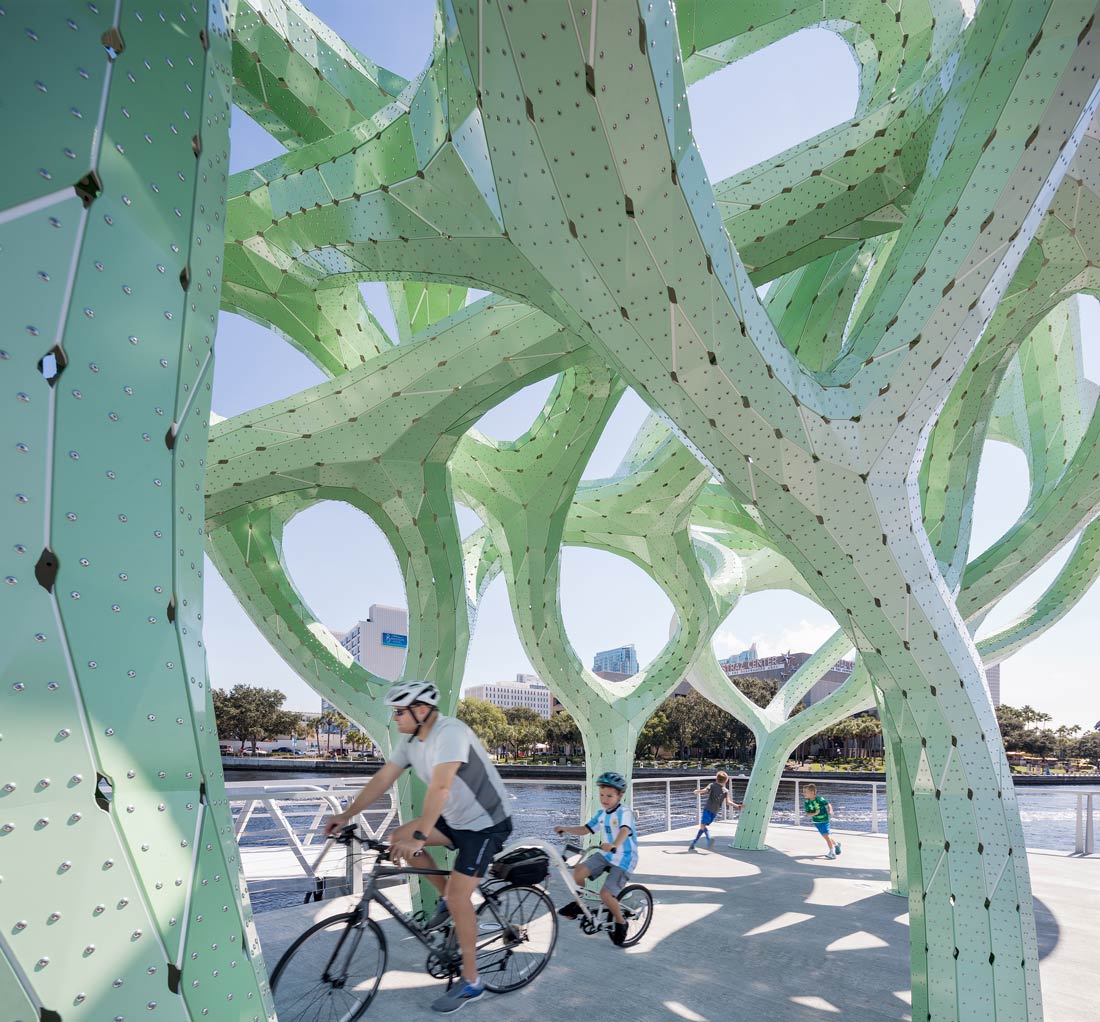 Six greens from “Chatty Cricket” to “Green Whisper” make up a linear gradient applied locally and according to the direction of the topology. Chosen specifically to react to the changing sun, the palette livens to a bright green in response to Tampa’s usually sunny weather, without tipping into the yellow spectrum, and appears more pastel on the rarer grey days. The muted green borrows from a tradition of Art Nouveau-era riveted structures, and stands up against the verdant palms of the shoreline surrounds. 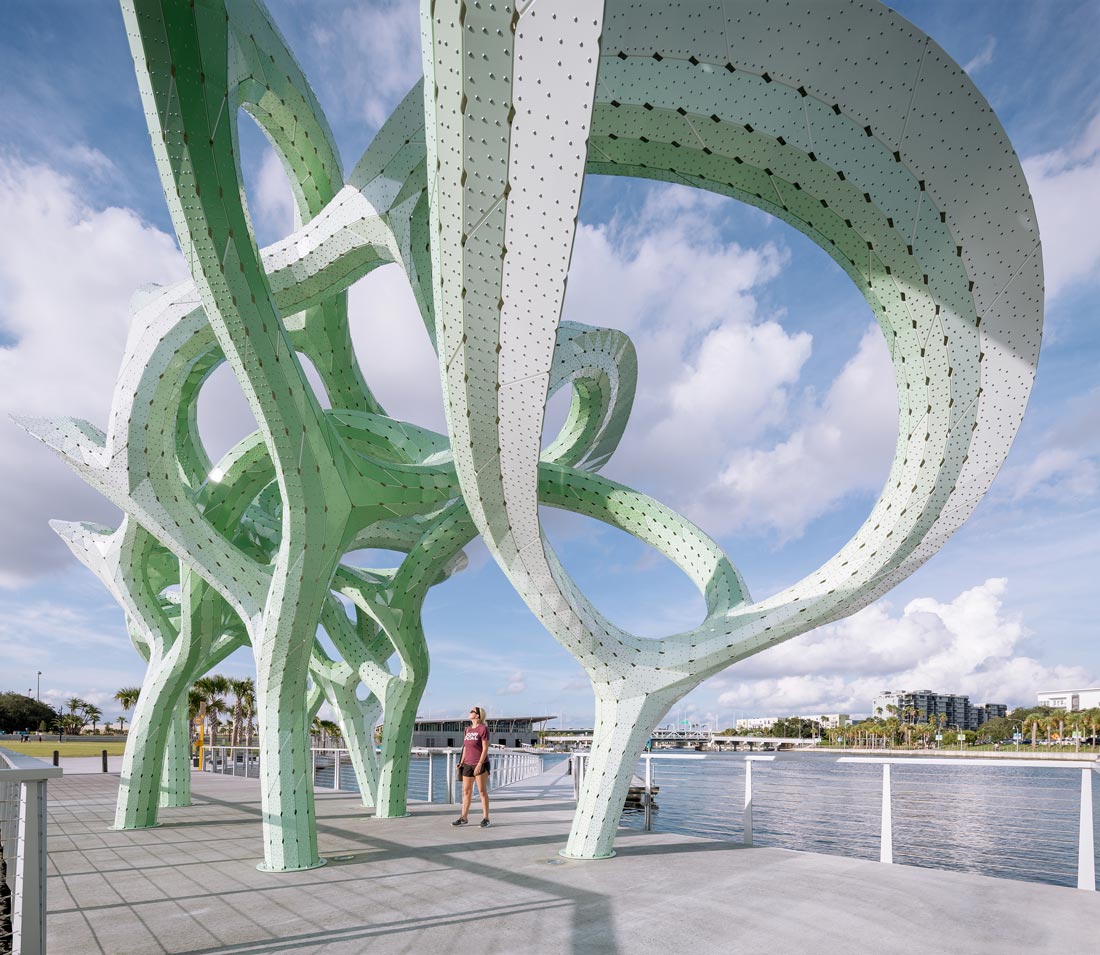 Distinct from our other projects that use a structural network, like another project in Florida, Under Magnitude , the branches and intersections of this network are not distributed and held in tension, but highly curated and directional. Legs splay out strategically to make spaces between them and frame views. The form is pulled to project out toward the water, in swooping cantilevered. The columns aid in that directionality, giving a sense that the form has been picked up by the wind. 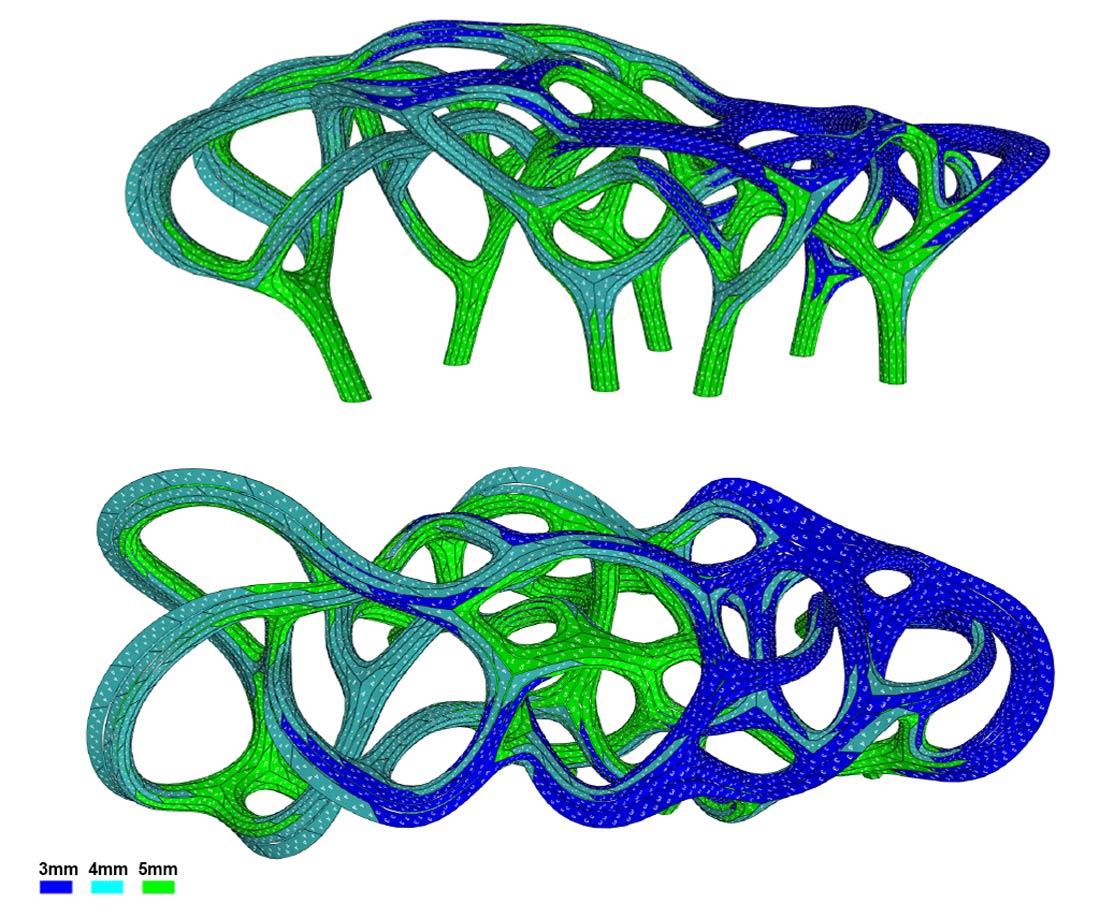 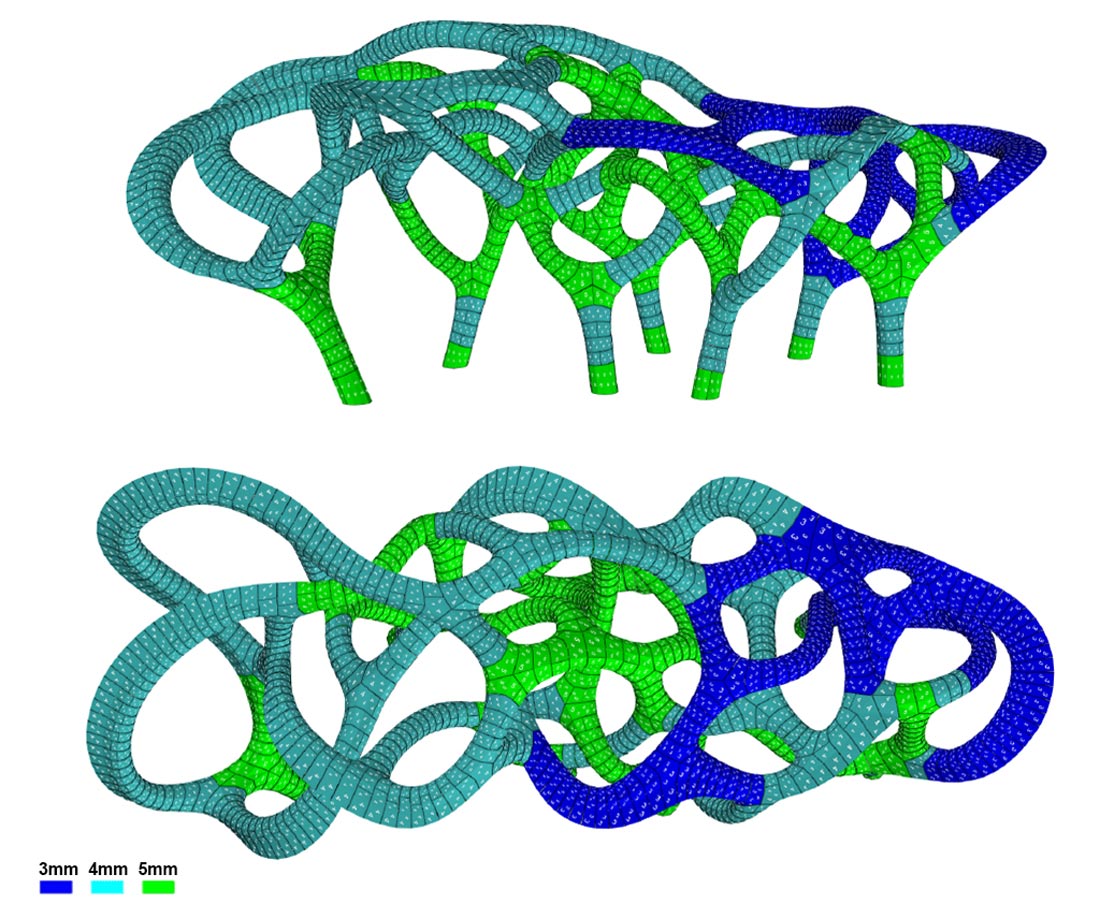 Shortly after the last pieces were riveted in place, Tampa withstood extreme wind loads from Category 4 Hurricane Michael. But the structure was devised to stand up to such weather: its 3,123 parts make up a double-layer structure, with rings forming the interior layer of the columns and stripes cross-laminating as an exterior skin to compose the branching elements.

Mangroves and other Florida Greenery

The structure borrows directly from the mangrove and its root forms which can thrive in salt water and sustain the biodiversity of the shoreline. Form of Wander is an inversion of the mangrove, allowing you to walk under the tangle of roots which often hidden under water. Floating above the river on the pier, its branches are reflected below, producing a familiar image of coastal greenery. 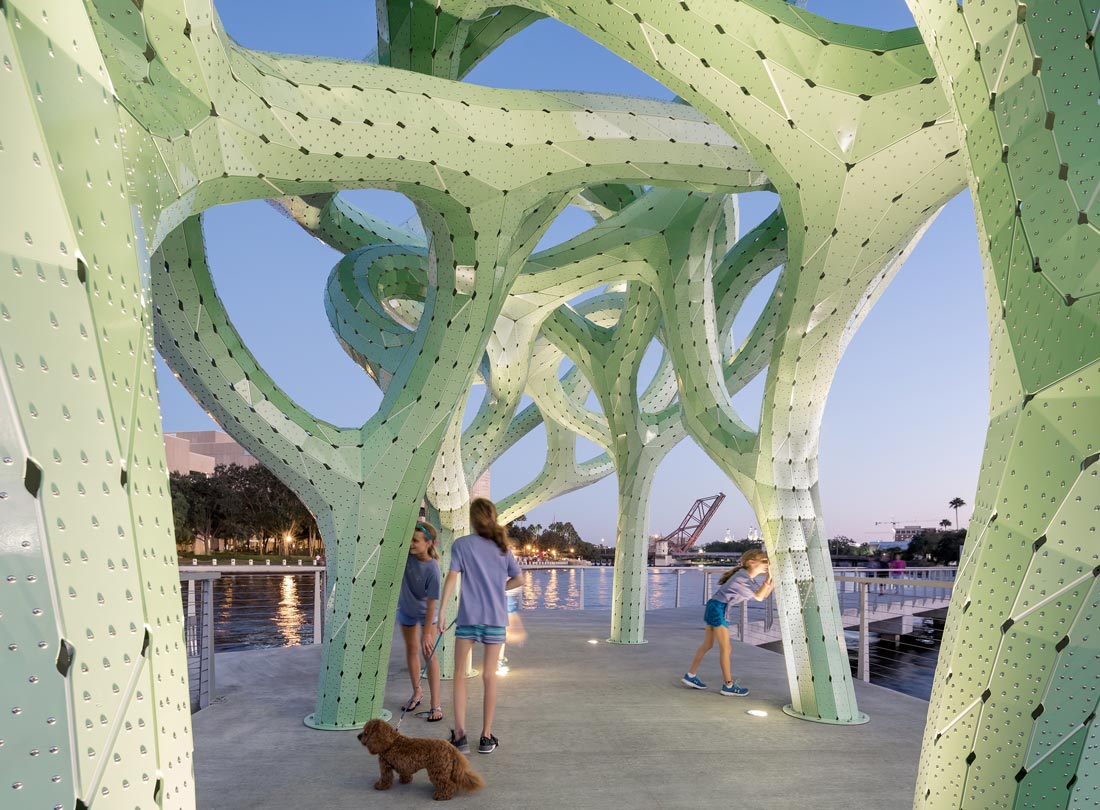 Form of Wander is the second permanent project by the studio in Florida, after Under Magnitude in Orlando. It was commissioned by Hillsborough County Public Art and is located at Julian B. Lane Riverfront Park in Tampa.

« Pergola in Luotuowan: Reuse of Wood Waste from Renovated Old Village Houses
Off the Cuff: Filtering the Sky and Capturing the Space »