The Bridge: Design Solution for Spatial and Socio-Economic Landscape

The Bridge embodies a design solution responding to the context of the spatial and socio-economic landscape of urban Vietnam. Housing the teams of several luxury brands that make up the OpenAsia Group in a typological blend between a warehouse and a logistic service building, the structure stands enigmatically in the middle of Old Hanoi. 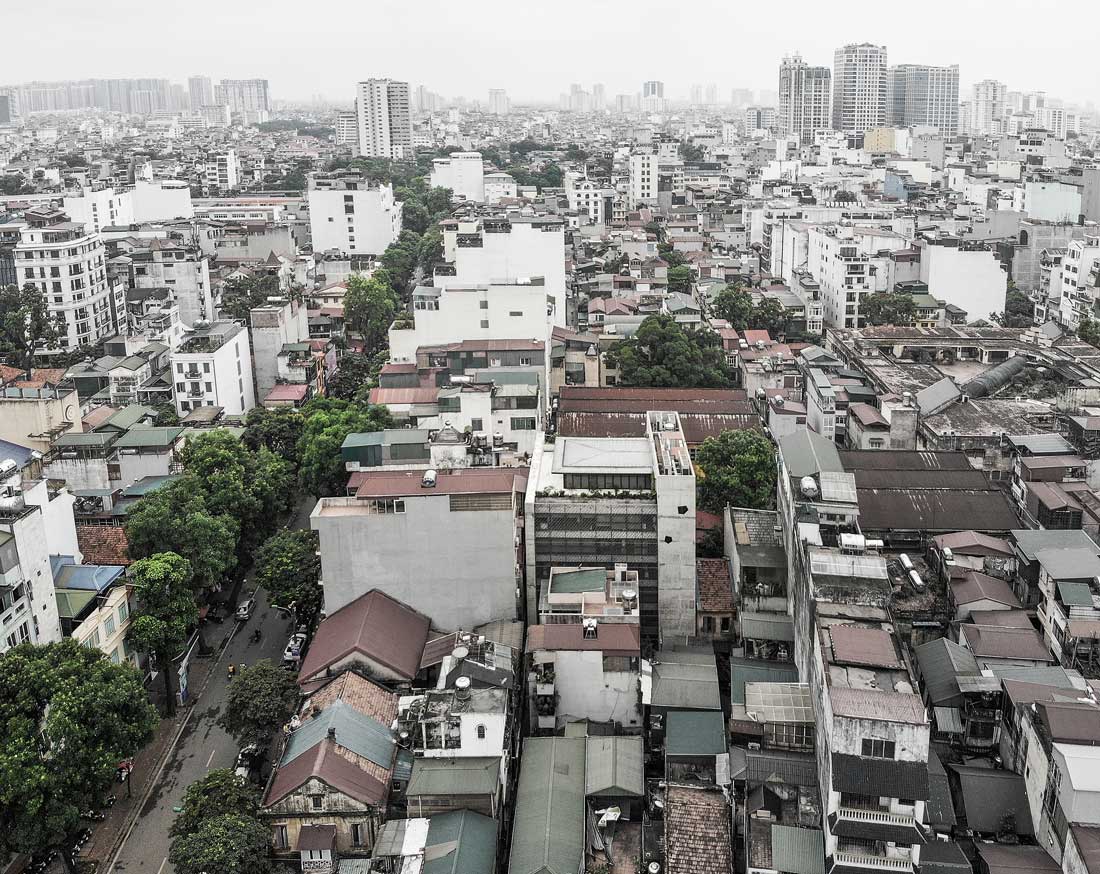 The proposal envisioned the office building as a series of platforms lifted by two concrete cores: one containing the circulation paths and main services, the other as a support for documentation, called “the memory wall”. In between is an open space, free of any columns, with large windows on both sides creating unobstructed panoramic views across each floor. 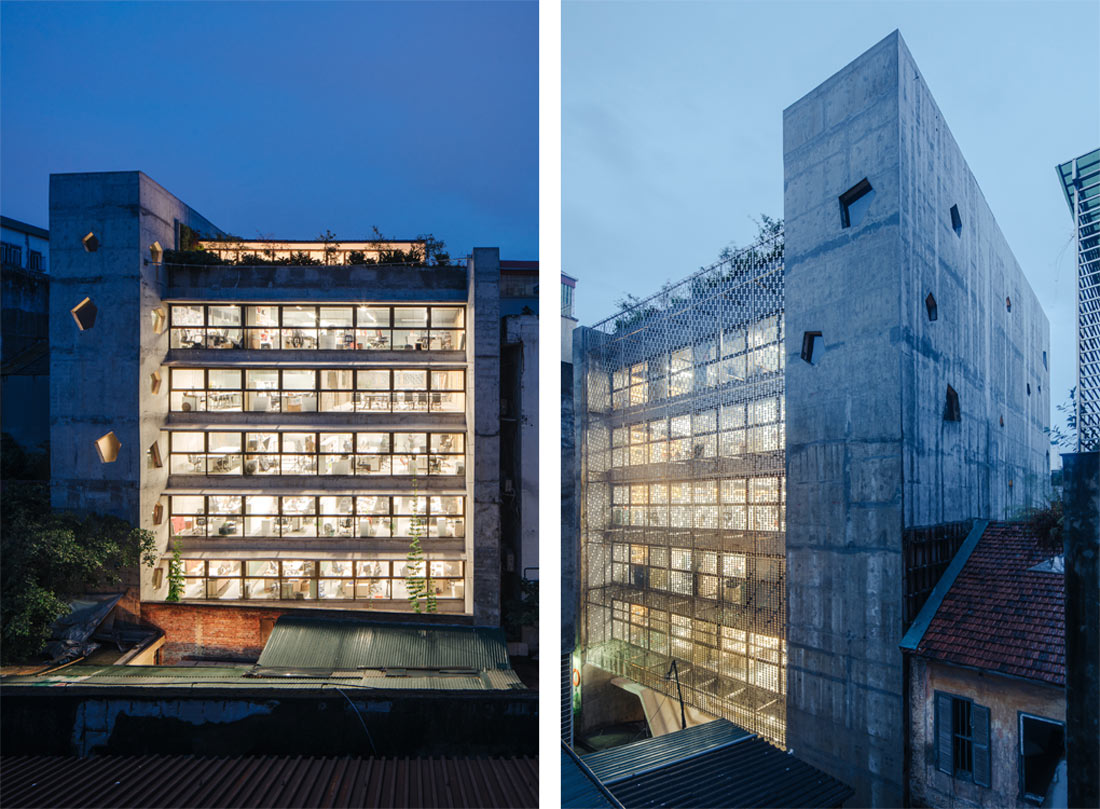 This sensation of space gives the building its unique character. In stark contrast to the surrounding density, the platforms are open to the surroundings, offering users a rare context of open space. These sweeping office areas represent synergies and transparency, allowing for a maximum of flexibility for any future use. 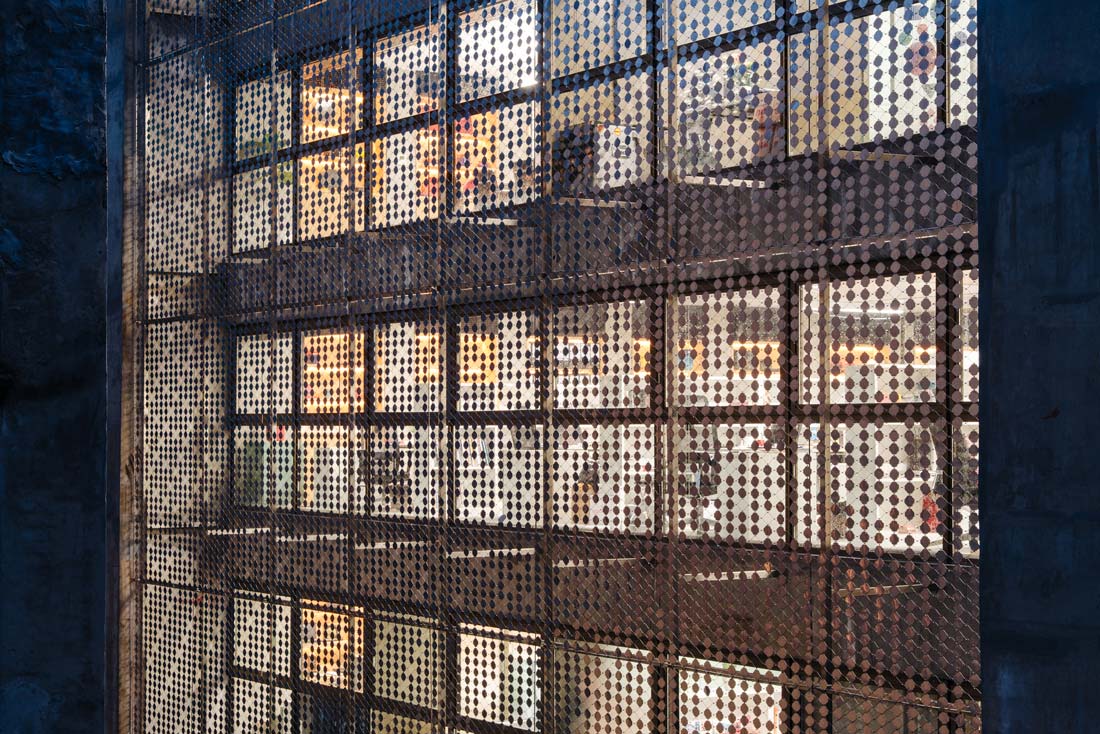 Here G8A proposes to diverge from density with a structural and visual porosity: the door-less entrance to the building seems like an extension of the sidewalk, and the building’s north-south exposure generates an open platform. Façades are voluntarily recessed to absorb the potential construction of surrounding buildings, in anticipation of further growth in the coming years. 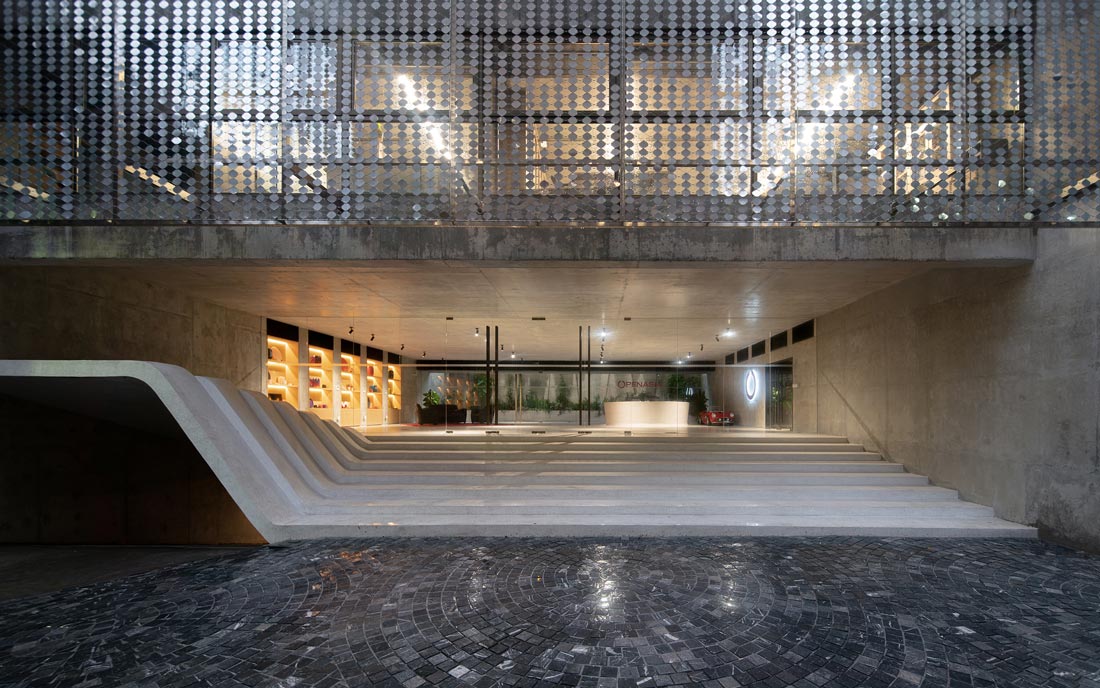 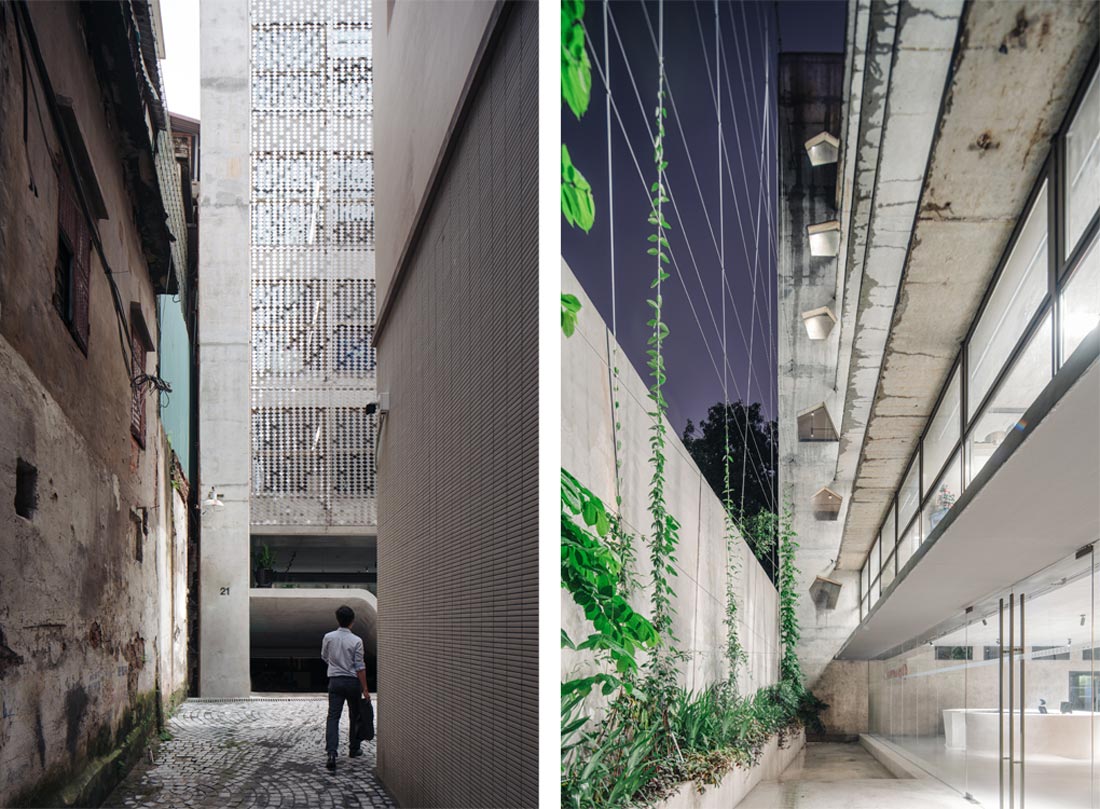 The mesh net on the entrance side and green façade cabling at the rear of the building provide passive shading and offer a sense of intimacy. At the back of the building, the open vertical space allows the site to generate its own light and ventilation, a soft filter from the nearby chaos. 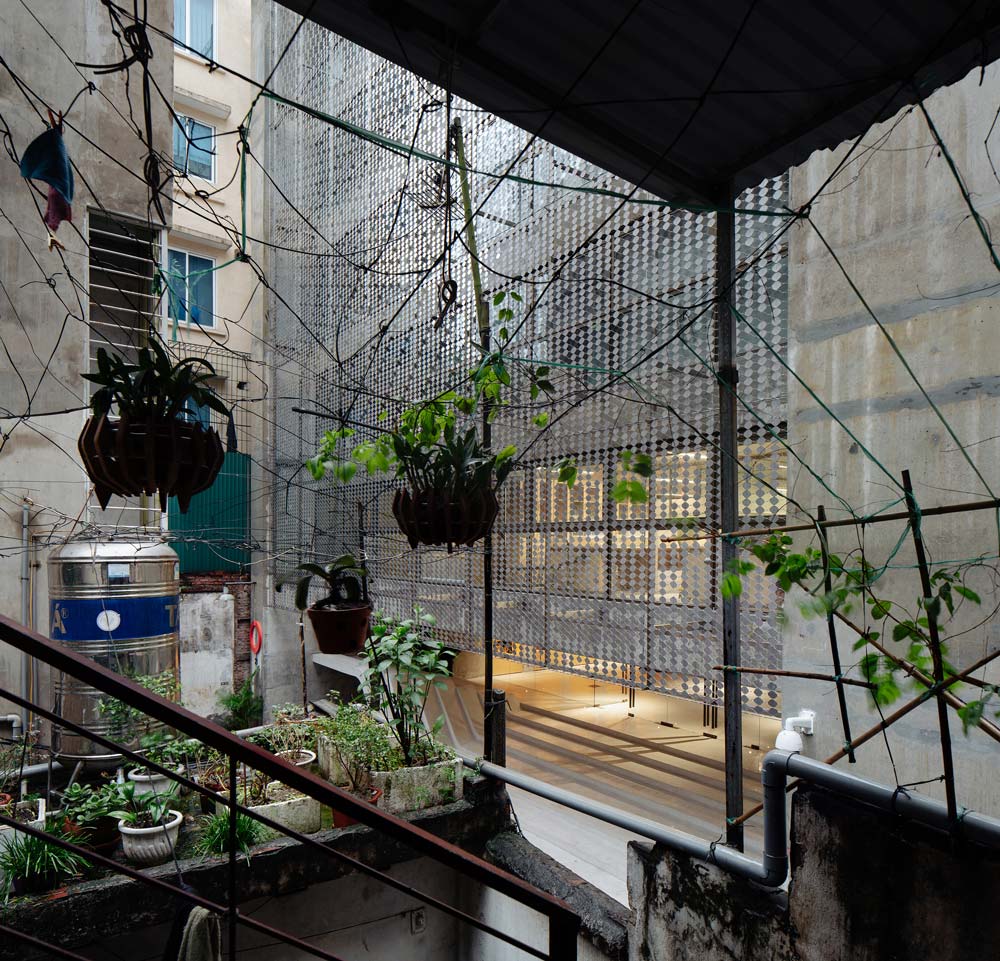 Upon entering the building, we are met with cues of materiality that embody the OpenAsia philosophy: “the transformation of raw material to fine product”. A prevailing use of unfinished concrete textures in relation to the light hues and fine polished details of bronze communicates the idea of transforming rough to precious and coarse to polished. This is followed by another sense of contrast, as the user moves from the defined areas of circulation to the panoramic open workspaces. 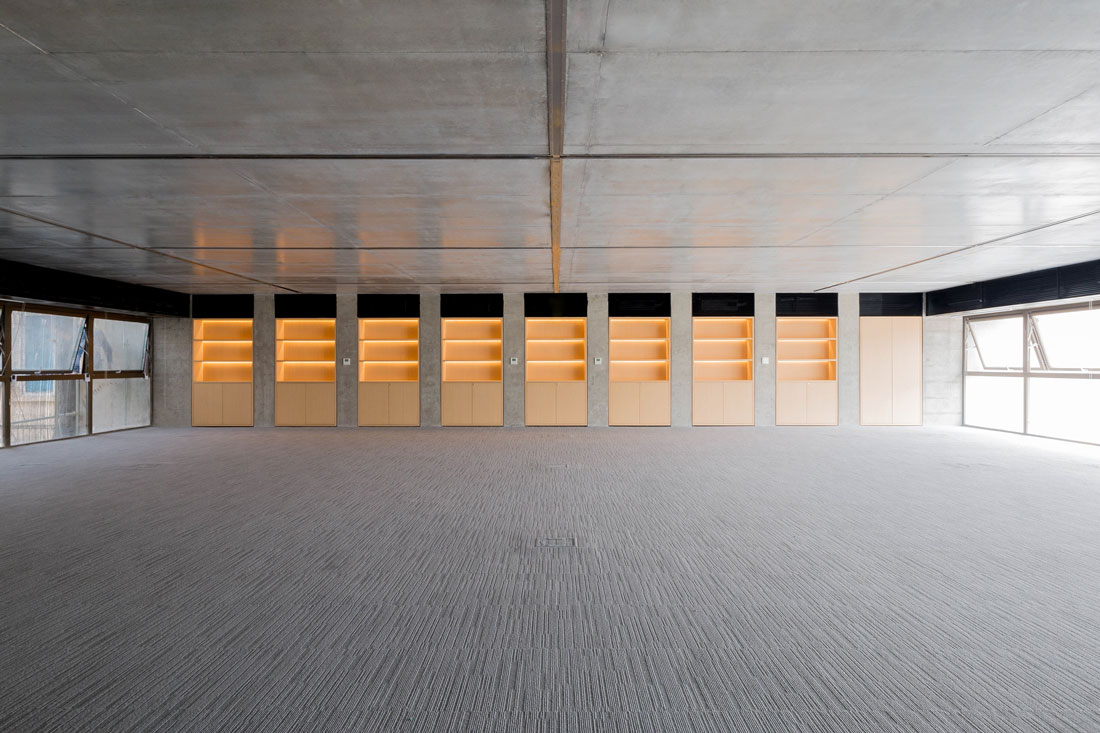 Here, G8A applies an adaptation of the “sustainable ruin” philosophy in the urban density of old Hanoi, a concept previously developed in the High-Tech Park of Hoa Lac. The ideology proposes creating a highly adaptable structural system, underscoring the robust infrastructural nature of the building, while prioritizing climatic responses, spatial relationships, and the exoskeleton constructive logic, as well as a strong identity expression that allows for future adaptation.