Thinking of a project as a process is the only common thread running through our work. Beginning to think about a project at the opposite end of the planning spectrum – from the bottom up – helps us merge into a deep understanding of local know-hows and the capacity for widening or subverting the initial end result to new uses. 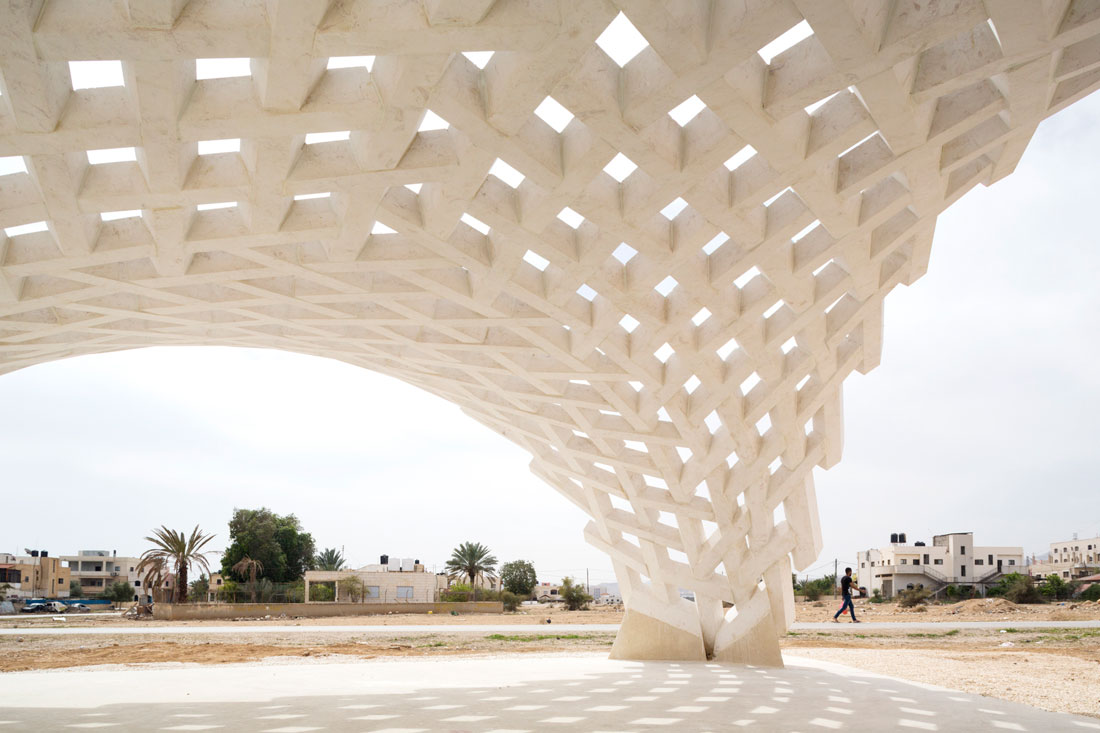 We consider the process as a means of minimizing energy consumption between design and realization. Working directly with factories and artisans helps optimize energy consumption in keeping with the available resources and the project goals. 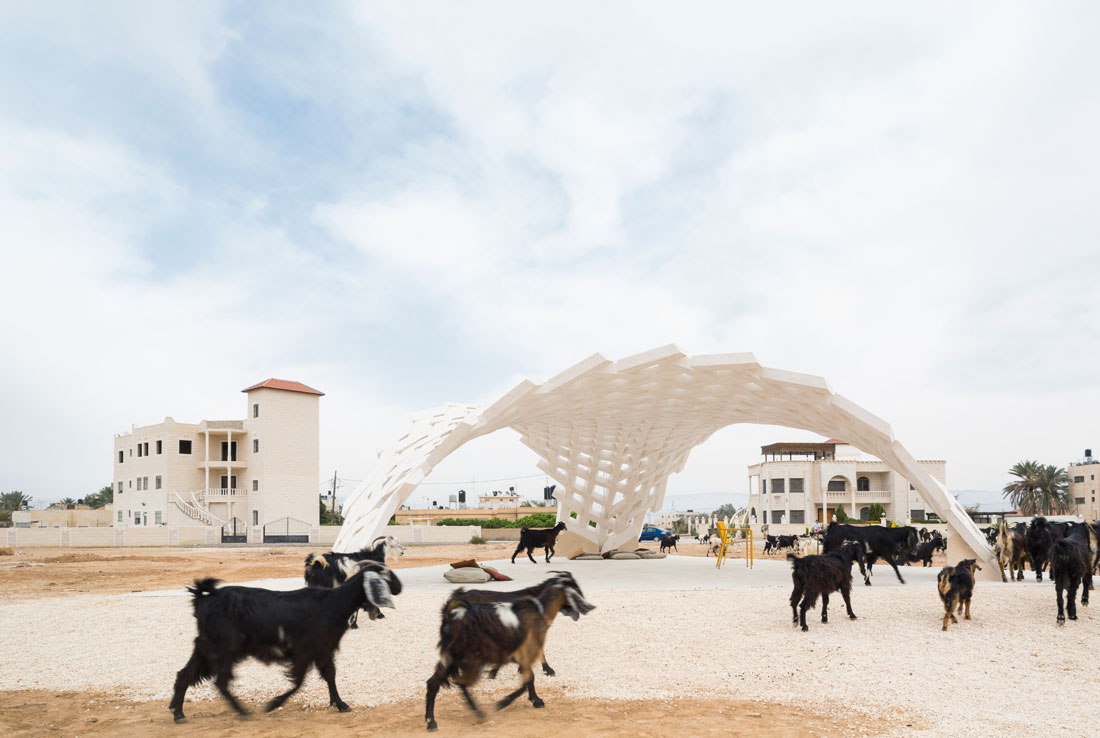 We believe that sustainability is no excuse for sacrifices. Instead, research is synonymous with the search for a more sustainable, more comfortable, and more interactive design.

The Laboratory Geometrie-Structure-Architecture (GSA) is a research unit of the National Graduate School of Architecture Paris-Malaquais. Founded in 1990 to foster research in the fields where the exact sciences and architecture come together, today GSA joins researchers from four French schools of Architecture, working together along three interwoven paths: the history of construction; the correlations between forms, materials and processes in architectural construction; and the building integration and environmental assessment of eco-materials and structured materials.

AAU ANASTAS’ research department ‘Scales’, and the GSA Lab of ENSA Paris-Malaquais are examining the use of three-dimensional free-form stone vaults in Palestine. The results of the research will be used for the construction of the el-Atlal* residency in Jericho. 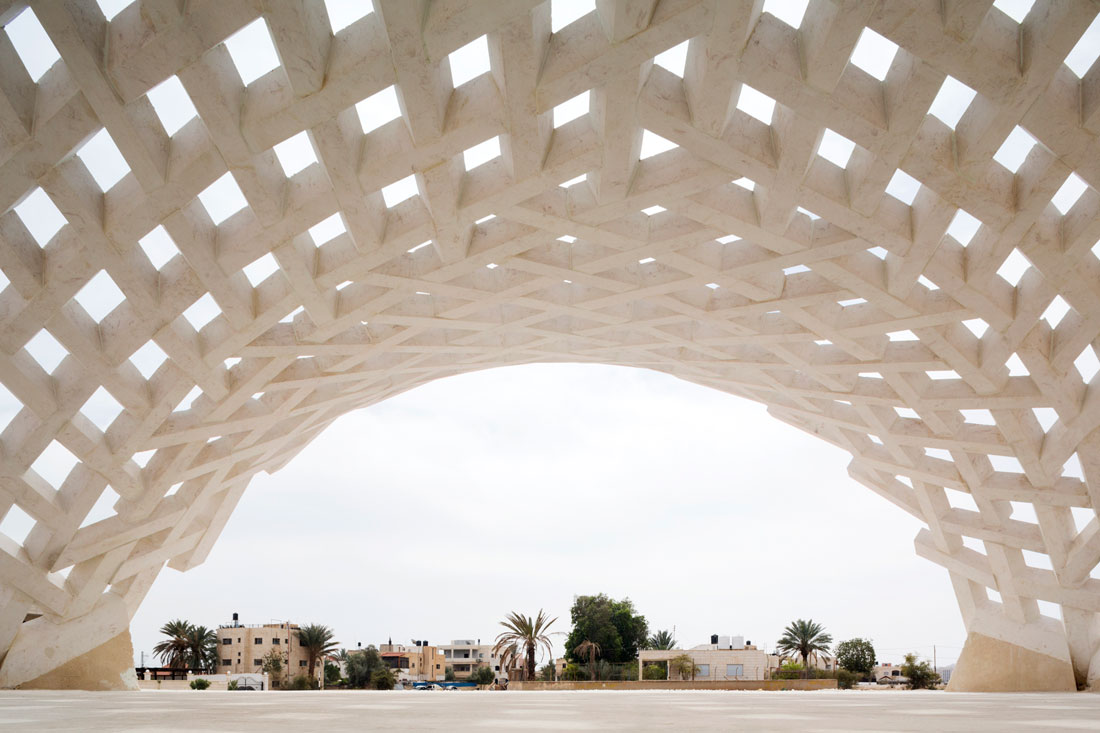 Palestine is suffering from the misuse of stone as a structural material: while, in the past, it was an abundant material used for structural purposes, it is now only used as a cladding material and the know-how associated with stone building is disappearing.

Our research department – SCALES – and GSA (Geometrie Structure Architecture) Lab are leading this research on stone construction techniques. The results of the research will be used to build the el-Atlal artists’ and writers’ residency in Jericho. As such, Stonematters is the first module of the residency and the first built vault in our research.

Stone Matters is built using an innovative construction principle, allowing for unprecedented forms for such structures. The architectural innovation is rooted in structural morphology and stereotomy. The vault covers a surface of 60 m2 and spans 7 meters, with a constant depth of 12 cm. The geometry follows the shape of a minimal surface on which geodesic lines are drawn to set the pattern of the interlocking stones. The whole structure is made of 300 mutually supported unique stone pieces.

Beyond the scientific and technical issues that make Stonematters a unique object, the project represents a cultural challenge as well: it was entirely built with available know-how in a peripheral zone of the culturally marginal city of Jericho.
The processes of several factories have been combined in order to harness existing techniques for new uses. The polystyrene blocks, for example, have been roughly cut in a factory and transported to another for a robotic carving process. Right after its completion, Stonematters attracted curious inhabitants of Jericho, and elsewhere in Palestine, putting together the seeds of the future el-atlal artists’ and writers’ residency.

Through the understanding of our historical cities the research tries to link construction techniques to urban morphologies. It creates a non-hierarchical hypothetical link between the scale of stereotomy and the scale of the urban fabric. In that context, the idea is to suggest new urban morphologies linked to the scientific use of a largely available material in Palestine.

In Palestine, the most common construction material is stone. Stone is abundant, widely available and – most importantly – an urban law imposed by the Ottomans requires stone construction in order to unify the built landscapes. This law underlines the shift from a self-managed urbanism to an authority urbanism. 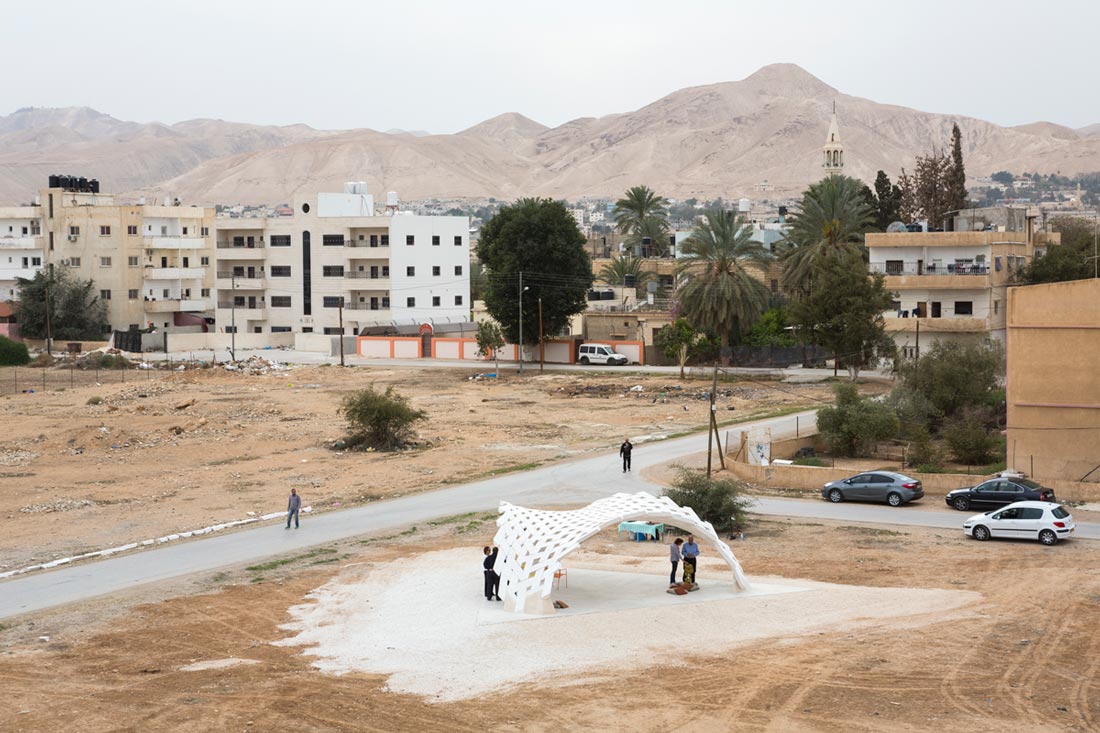 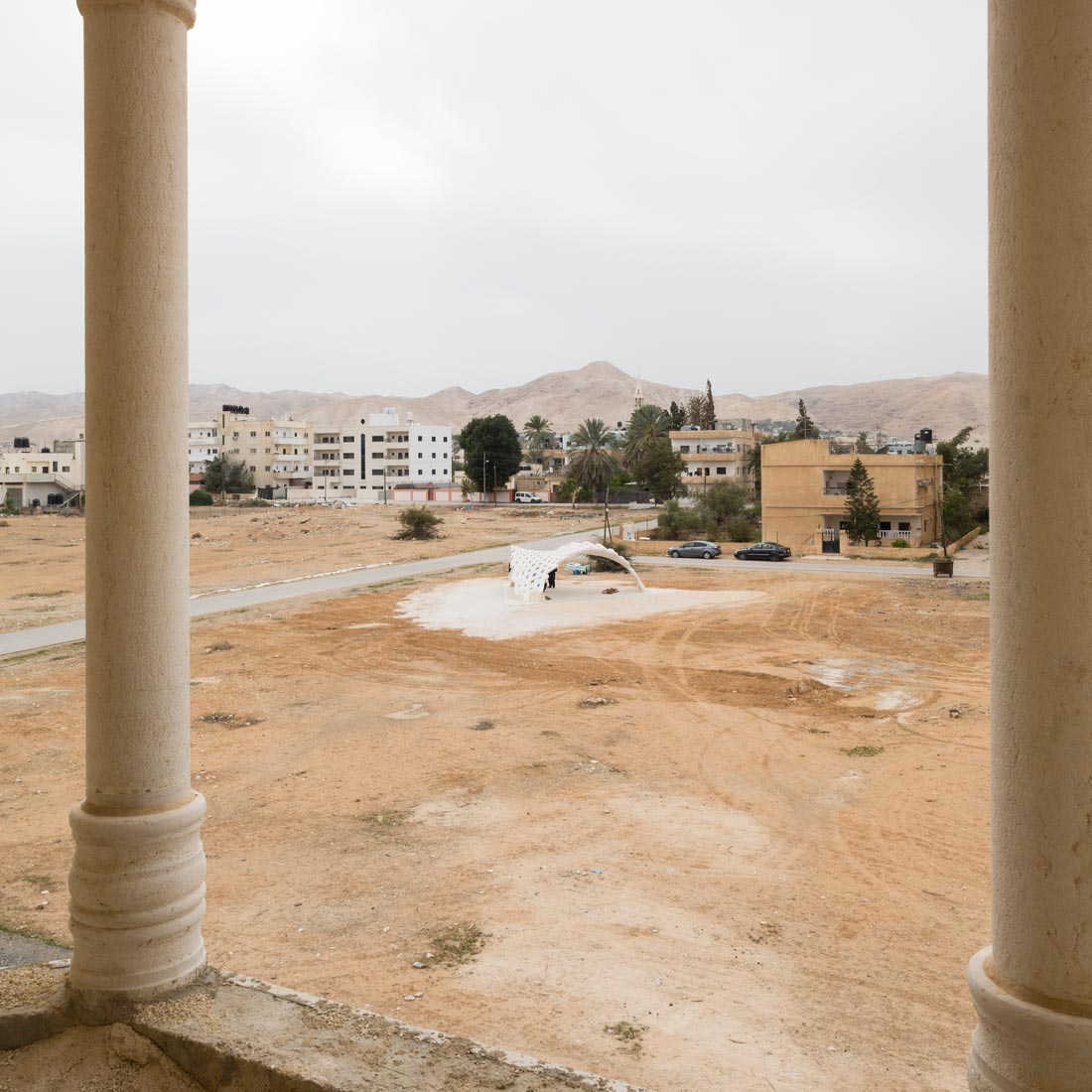 The vault covers a surface of 60 m2 and spans 7 meters, with a constant depth of 12 cm. The geometry follows the shape of a minimal surface, on which geodesic lines are drawn to set the pattern of the interlocking stones. The whole structure is made of 300 mutually supported unique stone pieces.

The geometry of the vault follows the shape of a minimal surface, on which geodesic lines are drawn to set the pattern of the interlocking stones. The whole structure is made of 300 mutually supported unique stone pieces. Each stone has 4 inclined interfaces that allow for the assembly of the different stone voussoirs.

Based on geometrical parameters such as the overall shape, the density of the paving, the inclination of contact surfaces, the size of the voussoirs, and the number of voussoir types, a specific structural criteria can be improved.

The formwork of the vault is made out of blocks of polystyrene of variable heights, carved into the shape of each stone. When arranged together they form a continuous counter-form of the entire structure. For each block, stones are referenced and placed in their exact position. 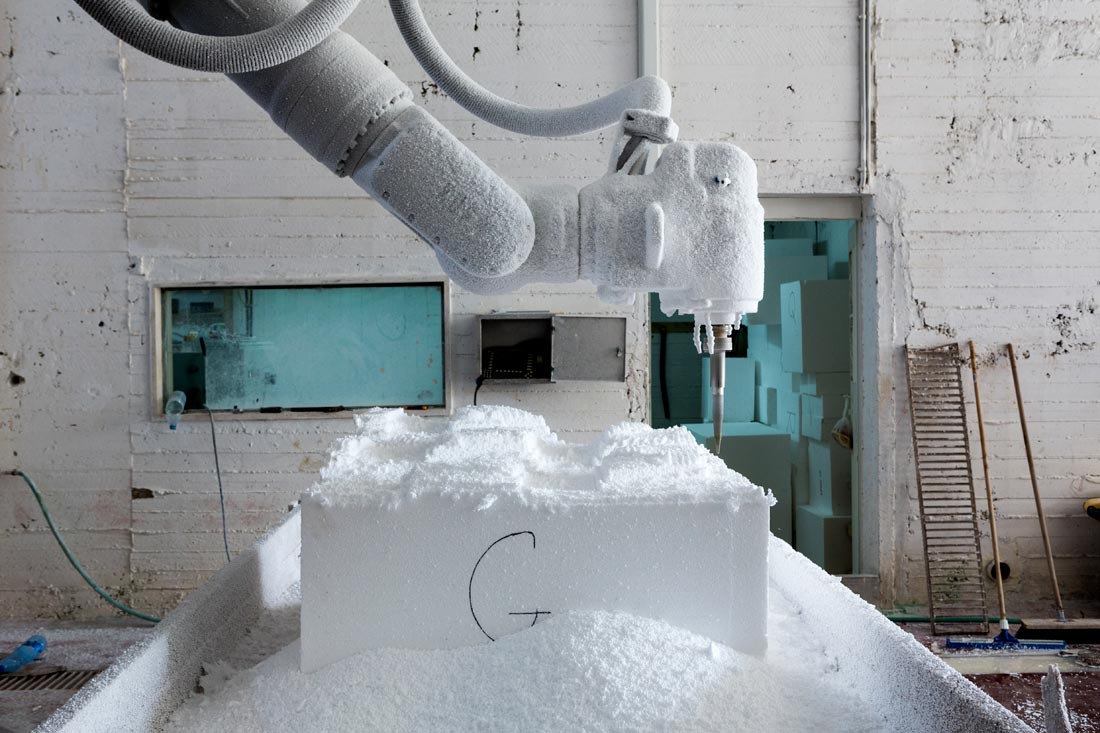 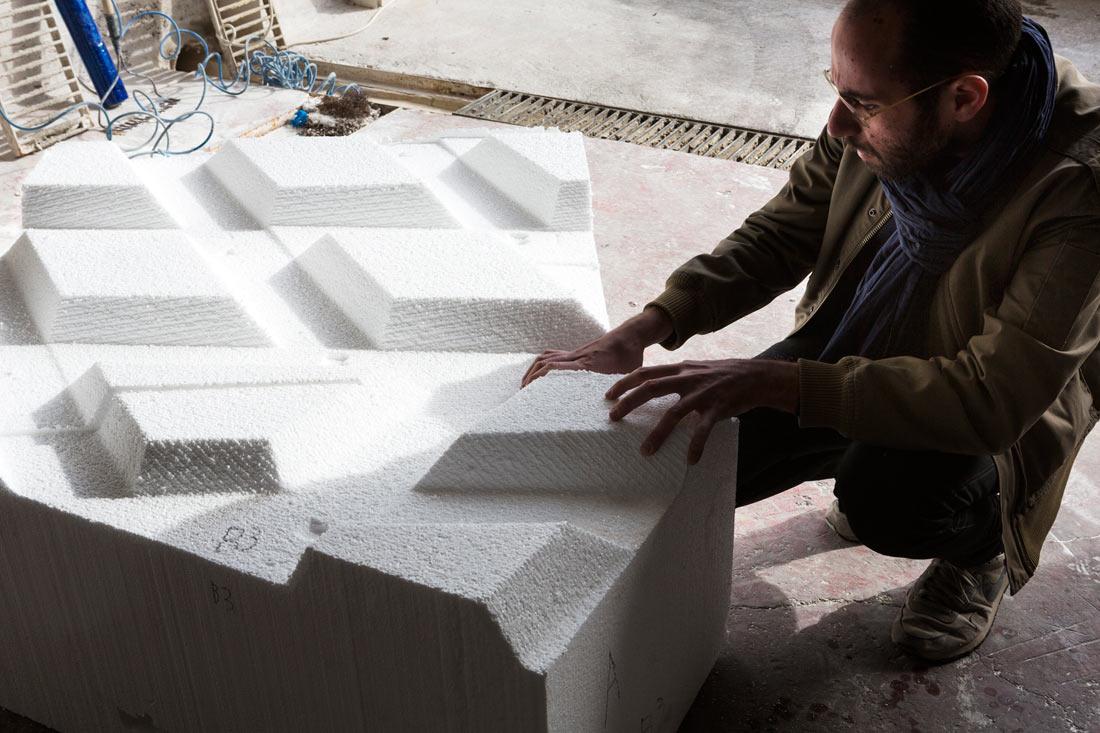 While the polystyrene blocks were digitally cut using robots, the main formwork was created by local artisans with the usual wooden elements. Different altimetries were defined, generating a stepped formwork that receives the carved polystyrene blocks.

Stone voussoirs are assembled on the mounted polystyrene blocks. Each stone’s location is defined on the formwork. The mounting began from the upper center of the vault and progressively advanced towards the edges in a concentric process. The inclined interfaces between the stone voussoirs generate the interlocking system of the structure.

Spanning 7m, the vertical displacement of the vault has been delicately controlled. The initial shape has been adjusted several times, adding a counter jib in the center of the gyroid form, increasing the curvature thus reducing the displacement. 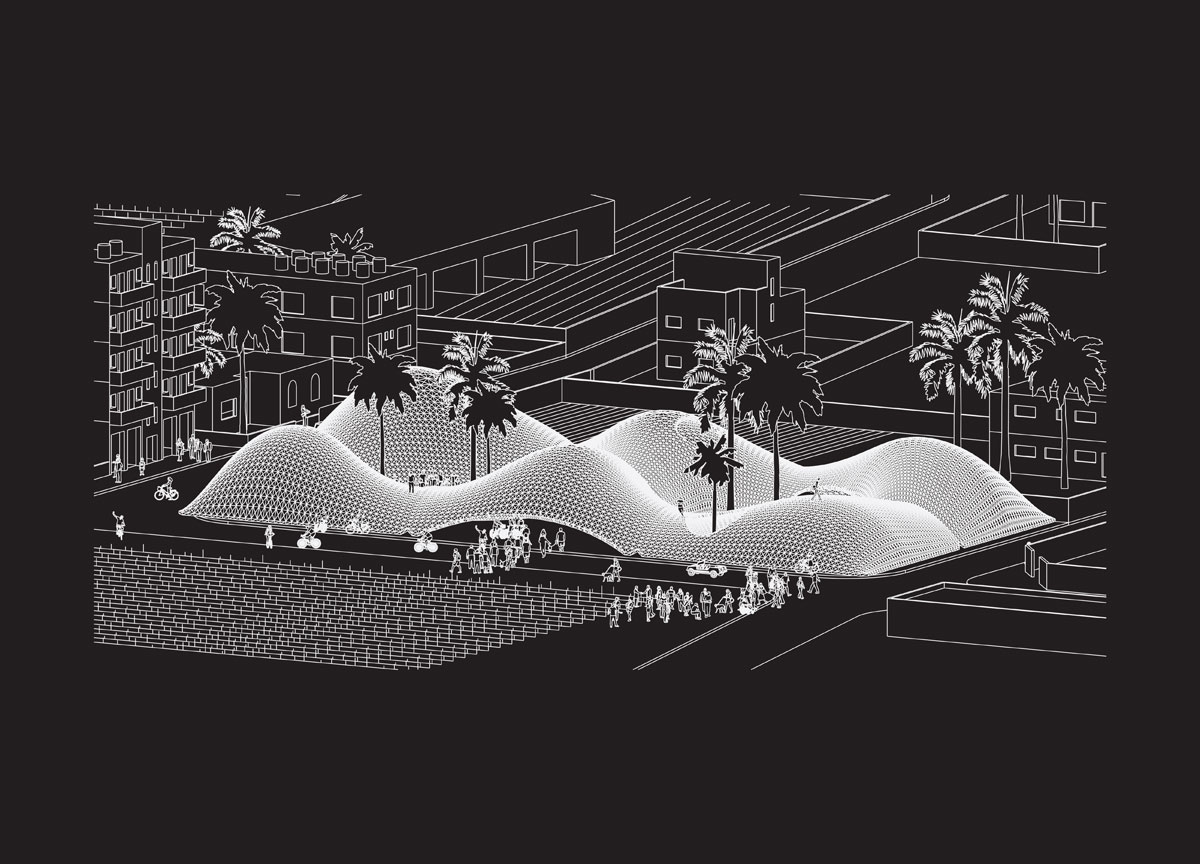 The dismantling of the scaffolding was sequenced into different steps. Laboratory glass plates were first installed at a few locations along the structure, allowing for measurement of the movement in the structure during the disassembly of the scaffolding. The formwork jacks were then taken down a few centimeters, letting the whole structure hold by itself. After a few hours the glass plates were inspected, and no brakes were visible. The scaffolding was gradually taken down. 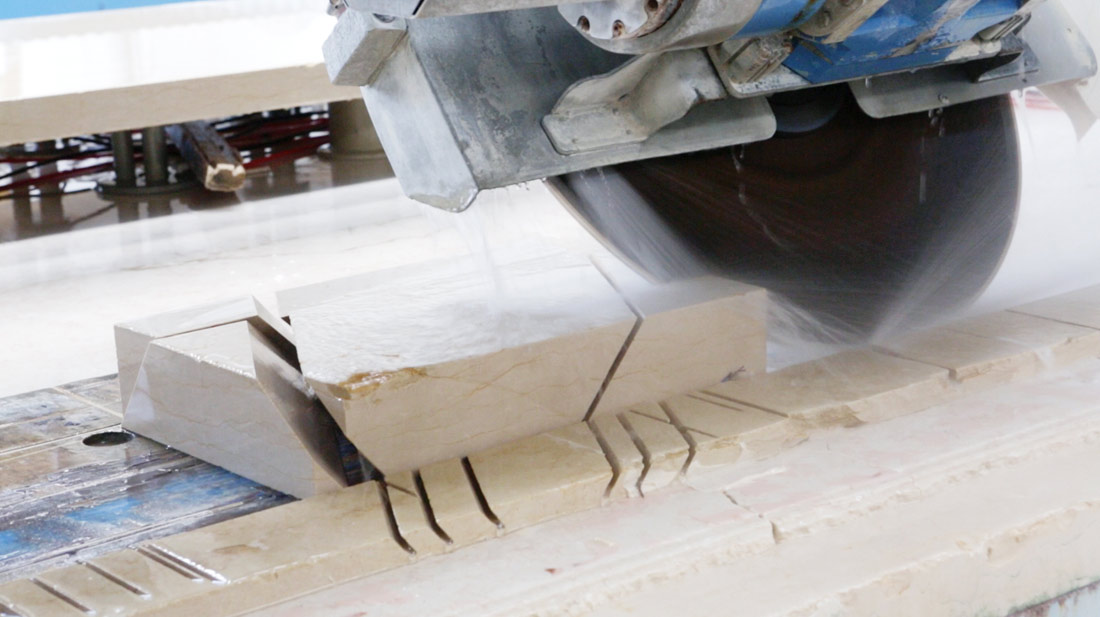 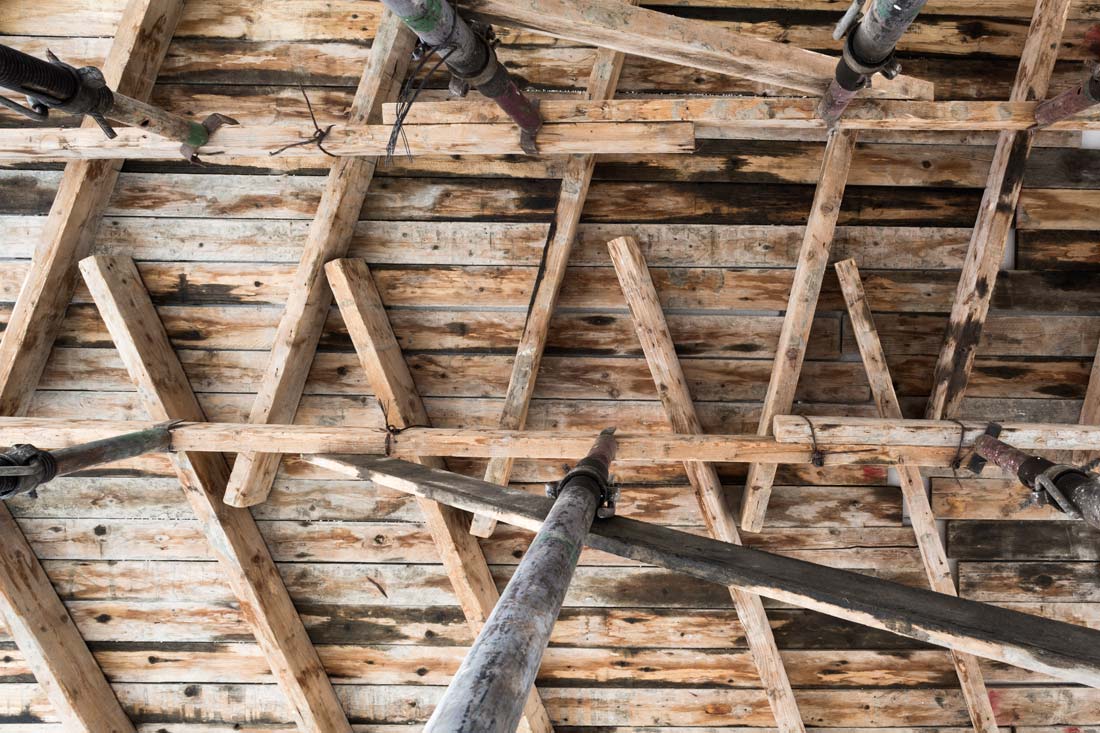 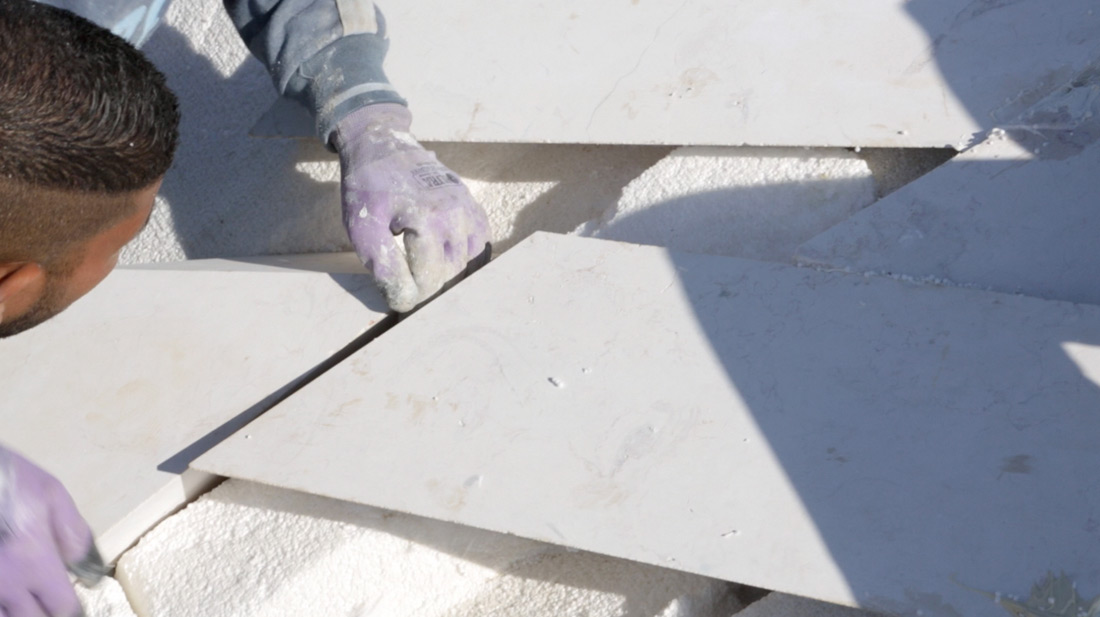 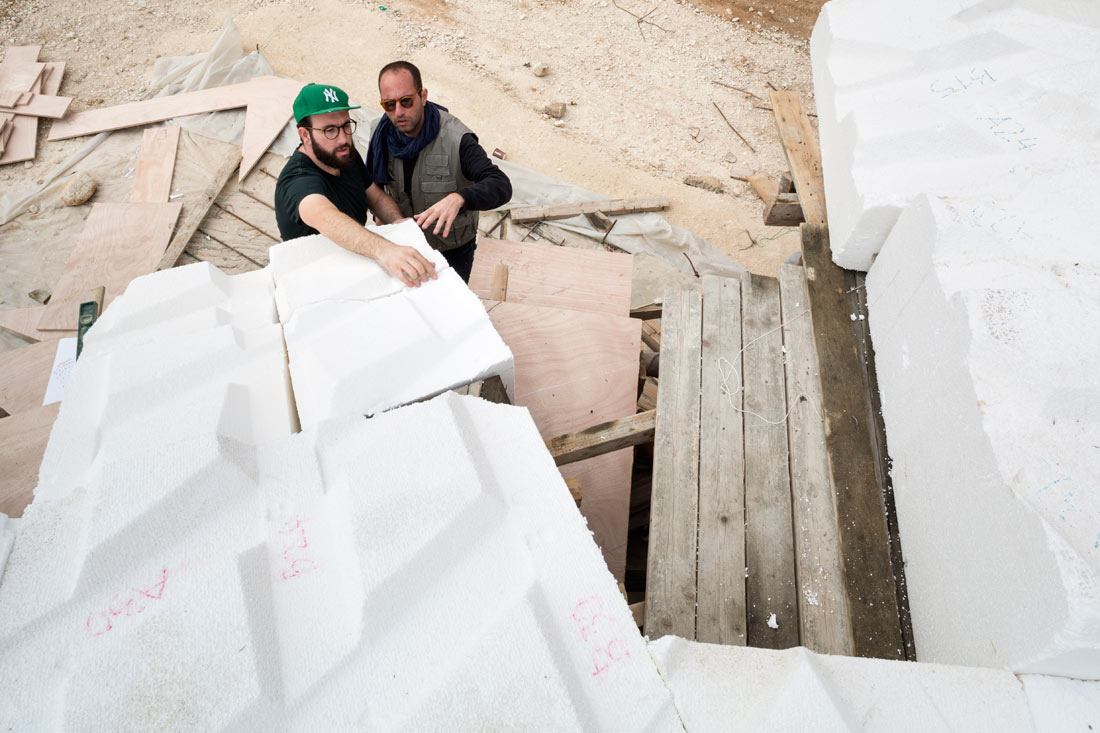 Until the beginning of the previous century, stereotomy – the art of cutting and assembling stones – played an important role in local aesthetics as well as in structural construction principles. Today’s stone factories only produce standardized blocks of a few cm in width, used as cladding for reinforced concrete structures. The techniques used for building with stone have an effect on the speed of construction, the urban spread of territorial boundaries, and the morphology of all buildings. In other words, stereotomy and the construction methods leave their mark on the Palestinian landscape. 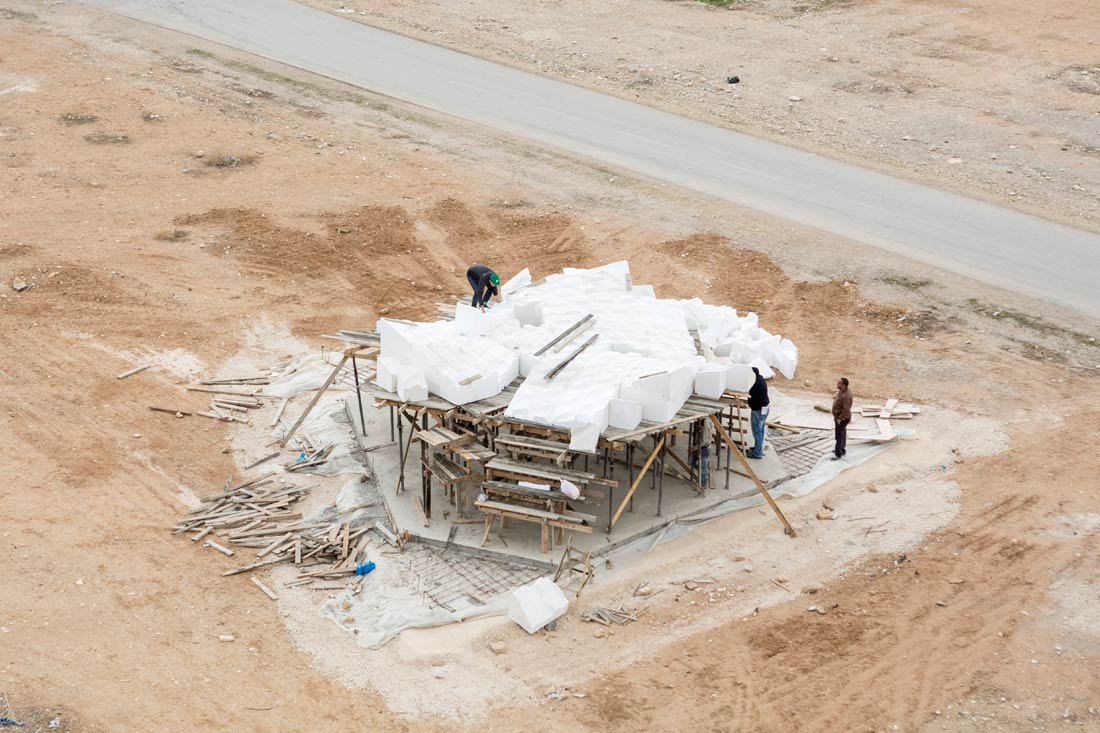 Reviving stereotomy as a way of optimizing structural performance, using advanced design simulations, is the founding principle of Stone Matters.
Based on geometrical parameters such as the overall shape, the density of the paving, the inclination of contact surfaces, the size of the voussoirs, and the number of voussoir types, a specific structural criteria can be improved. The whole process is an in-progress workflow which will aim at using computational design and advanced fabrication techniques to present a modern stone construction technique as part of a local and global architectural language. 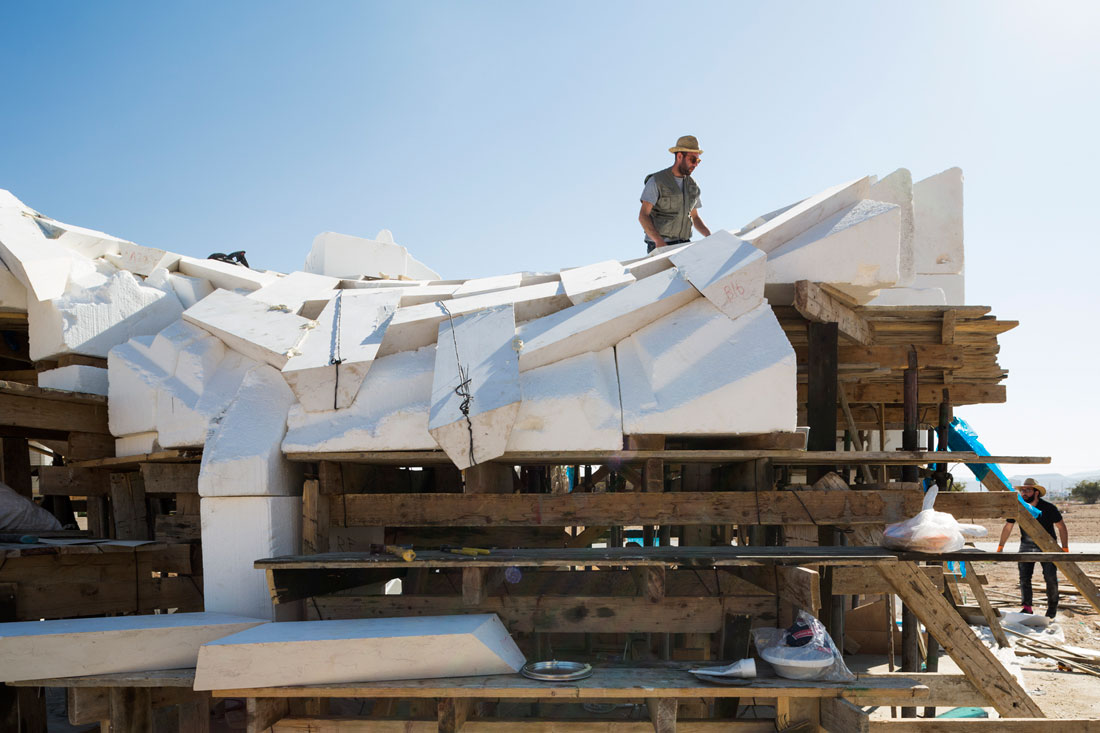 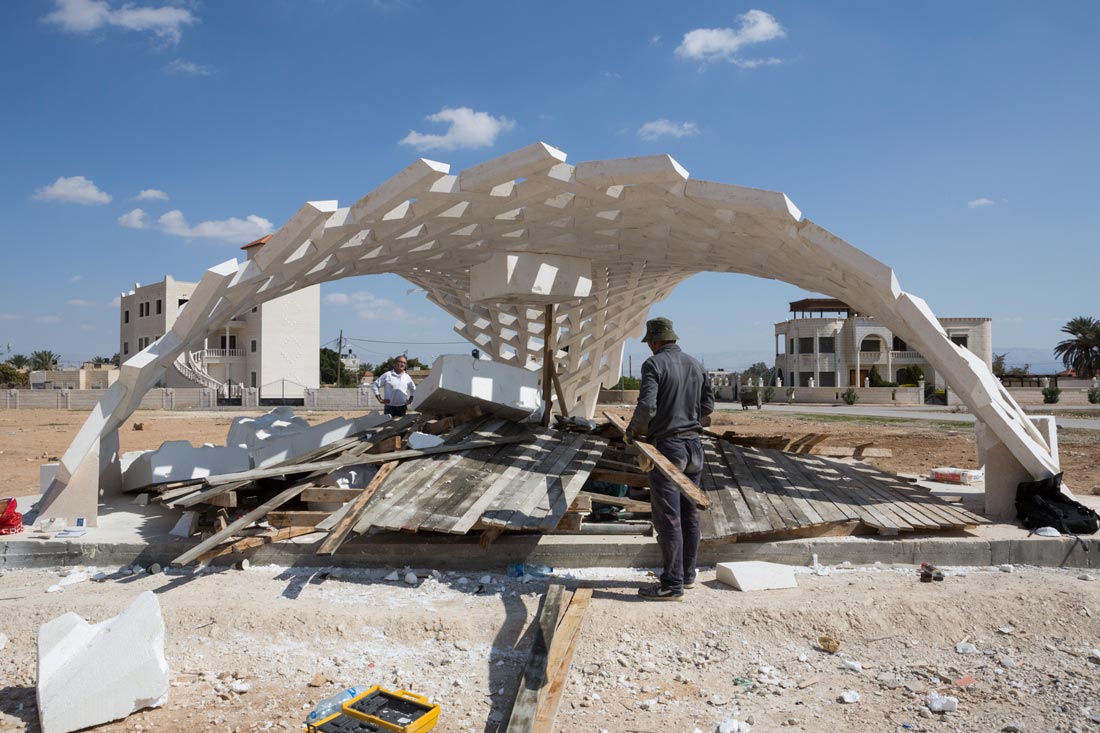