Sheikh Zayed Plaza: The Urban Environment as a Living Urbanism

If we look at the urban environment as a living organism, with its circulatory systems, tissue stratification and matter metabolization, we start to understand why the generic urban patterns from the Modern period weren’t completely effective, demonstrating why a better relationship between the natural and built environments needs to be at the center of the discussion for healthier cities. Although using biology to solve major problems in contemporary architecture is not novel, bionics offers numerous strategies based on the amalgamation of natural and artificial mechanisms, and in this case, bionics is used to enhance the circulation of people in the urban environment, with less impact and waste generation. 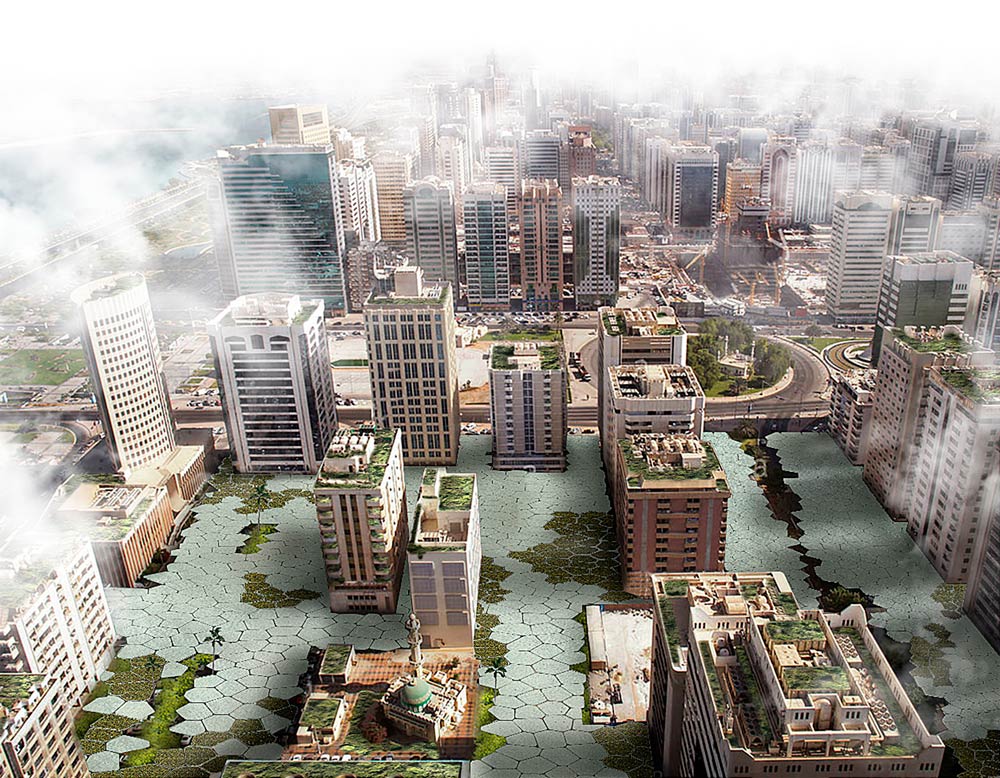 When used in conjunction with bioreactors, microalgae is up to 400 times more efficient than a tree at removing CO2 from the atmosphere: 1 kg of algae requires about 1.8 kg of carbon dioxide, which is converted into biomass and oxygen. Now imagine if we could scale up this process and use algae at an urban scale. Not only would it sequester carbon dioxide and boost hyper-local oxygen levels; it would also dissipate the pollution haze that traps heat over the city, decreasing local temperatures. 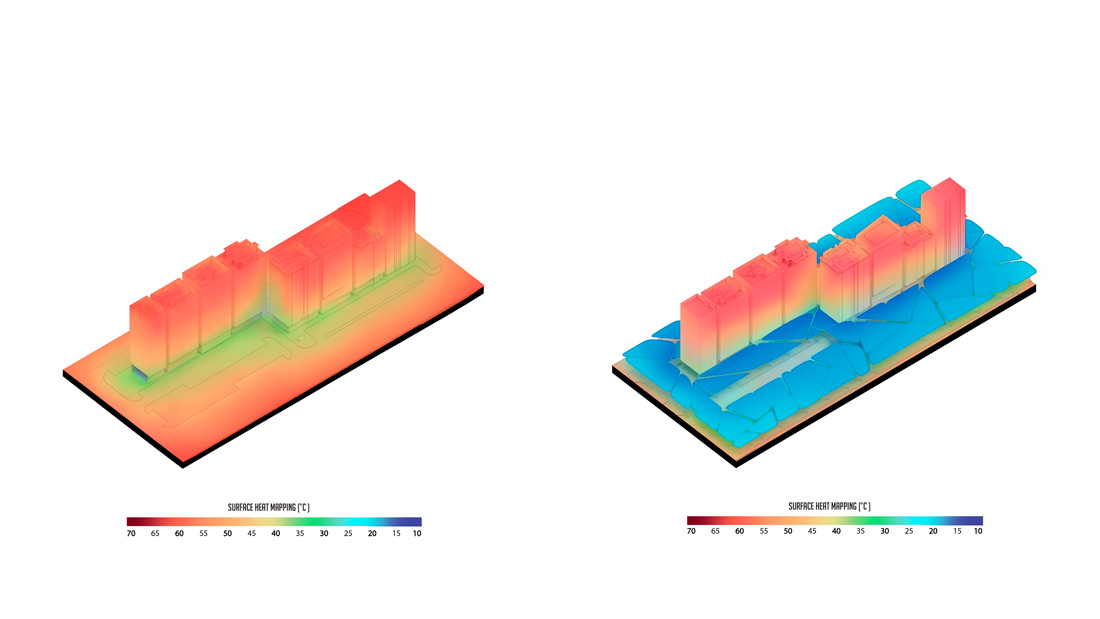 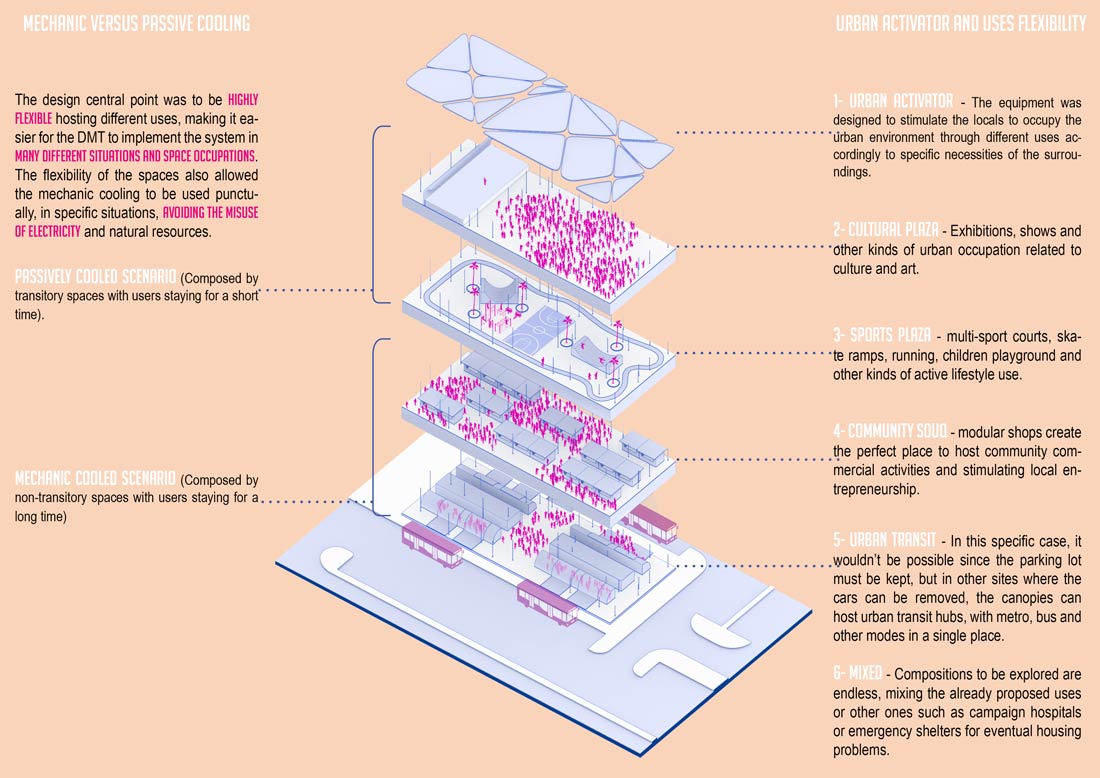 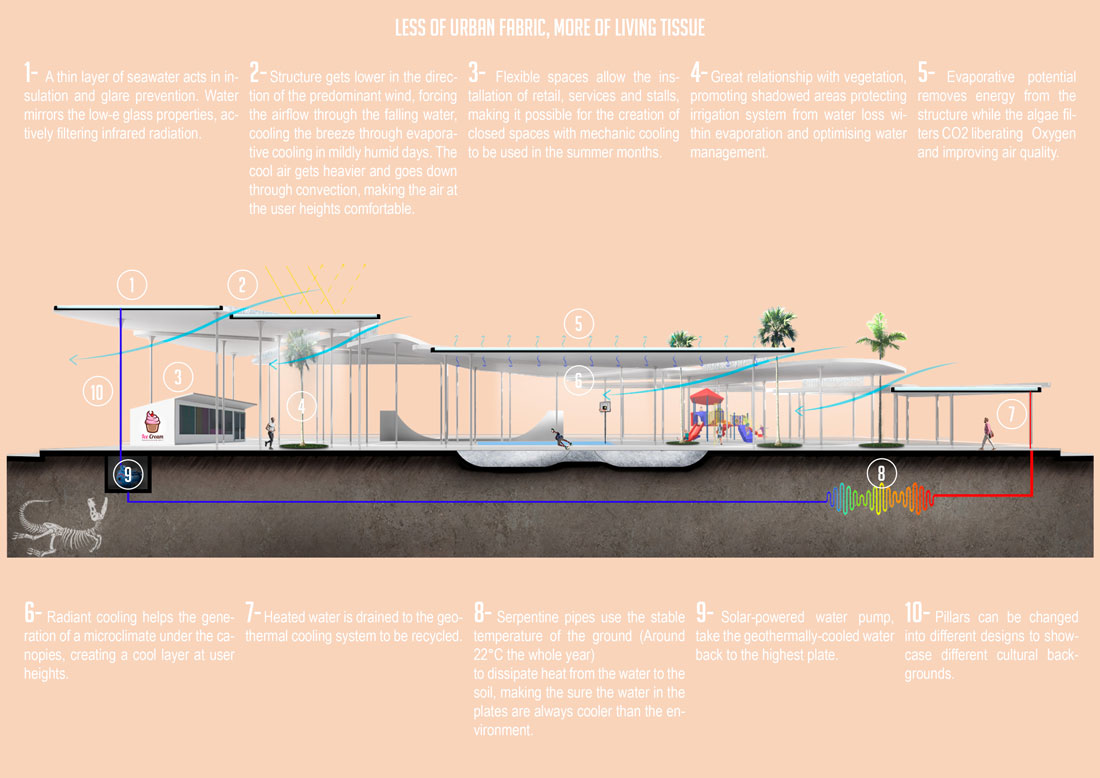 Vegetation is the most obvious answer for cooling cities, but Abu Dhabi’s harsh climate needs us to be more inventive than that since freshwater is not highly available, making large irrigated areas a bad option for urban resilience. The central strategy here was to replicate the effect of trees in other climates, without the disposal of a single drop of freshwater. The modular structural pattern creates a cluster of lightweight canopies, which might be applied to a large range of programs – from small public pavilions, plazas and walkable streets, to large compositions, covering entire neighborhoods – serving as a medicine for overheated areas, acting quickly acting to support local temperature regulation. 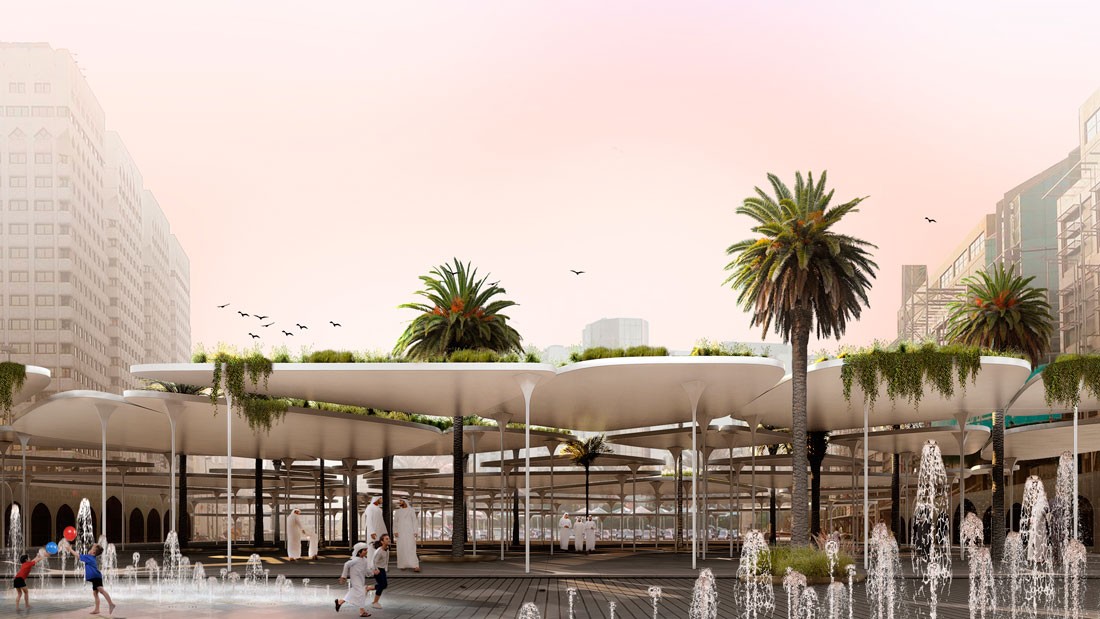 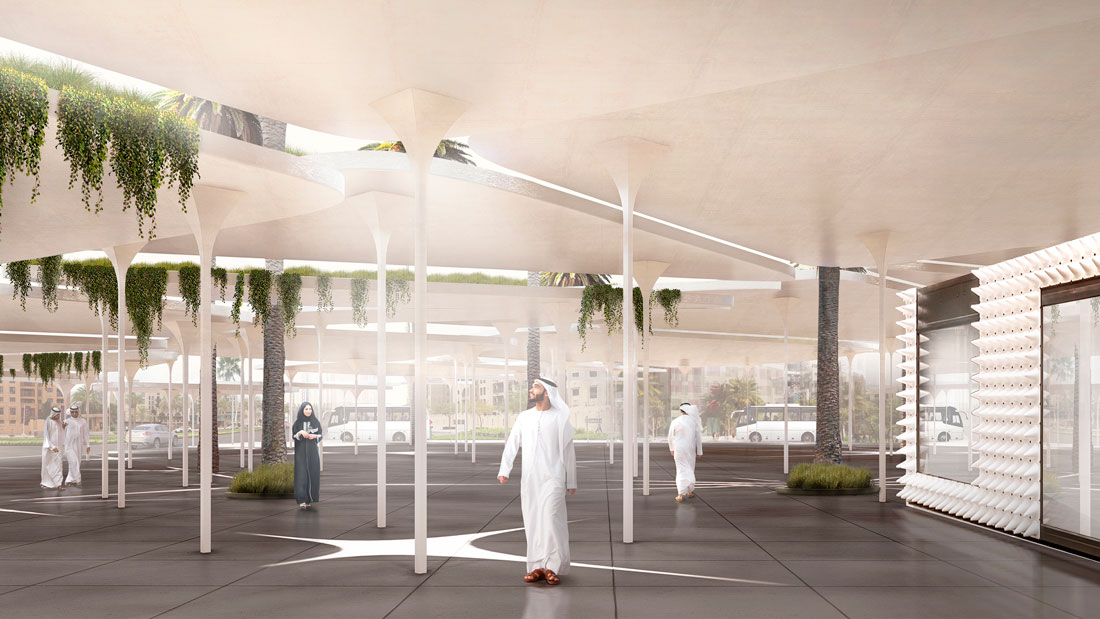 Taking advantage of the absorption and transmission properties of water, the water layer blocks infrared radiation, protecting the surface of the tanks from absorbing and re-radiating heat into the surroundings. The geothermally cooled water approaches a wet-bulb temperature of 15°C (a typical asphalt surface reaches 60-100°C), mitigating the albedo effect. 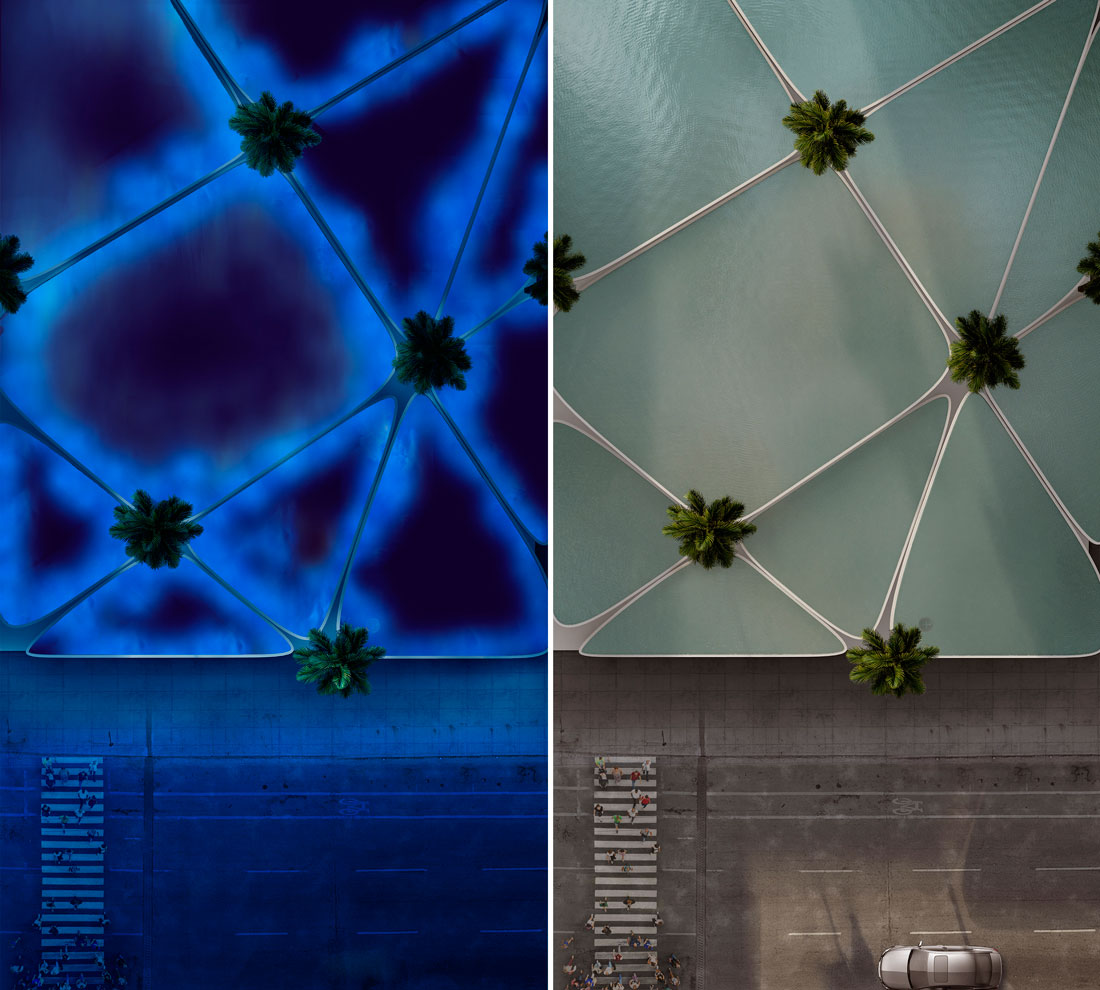 The air temperature is approximately 50% radiant heat from surface radiation and 50% air temperature, which means that under large compositions of the system given air temperatures of 35°C, a mean radiant temperature of structure and air of 25°C is achieved. With this 10°C drop in local temperatures, the number of days in which mechanical cooling is required can be cut by 15% to 20%, bringing down the carbon emissions embedded within electricity production, while offering better quality of life, more comfortable public spaces and a new source of wealth.

The proposal was one of the 20 projects chosen in the “Cool Abu Dhabi” competition, with a jury composed of representatives from Princeton, MIT and OMA-Middle East, among architects from 67 countries, to integrate future strategies implemented in the urban spaces of the city. In addition, the project also received an honorable mention from the jury of the Institute for Advanced Architecture of Catalonia in the 8th Advanced Architecture Contest.