Selected as one of the “historical and cultural villages” in Fujian province, Shangping village has been sustained by its agricultural tradition and Hakka culture. In Shangping, most of the villagers have the surname of Yang, who are the descendants of Captain Yang Zhen from the Han Dynasty. Shangping village has a complete rural feng shui pattern where two streams run around the village and gather at Shuikou area (the water gap, village entrance). It has many buildings of provincial-level cultural heritage such as the Tai Fu Tai Mansion, the Yang’s Ancestral Temple, Shezumiao Shrine, Zhaogongmiao Temple, etc. According to the legend, the great scholar Zhu Xi used to give lectures in Shangping and left it with treasured calligraphy works. Therefore, Shangping has a reputation for being a “literary village surrounded by water”. 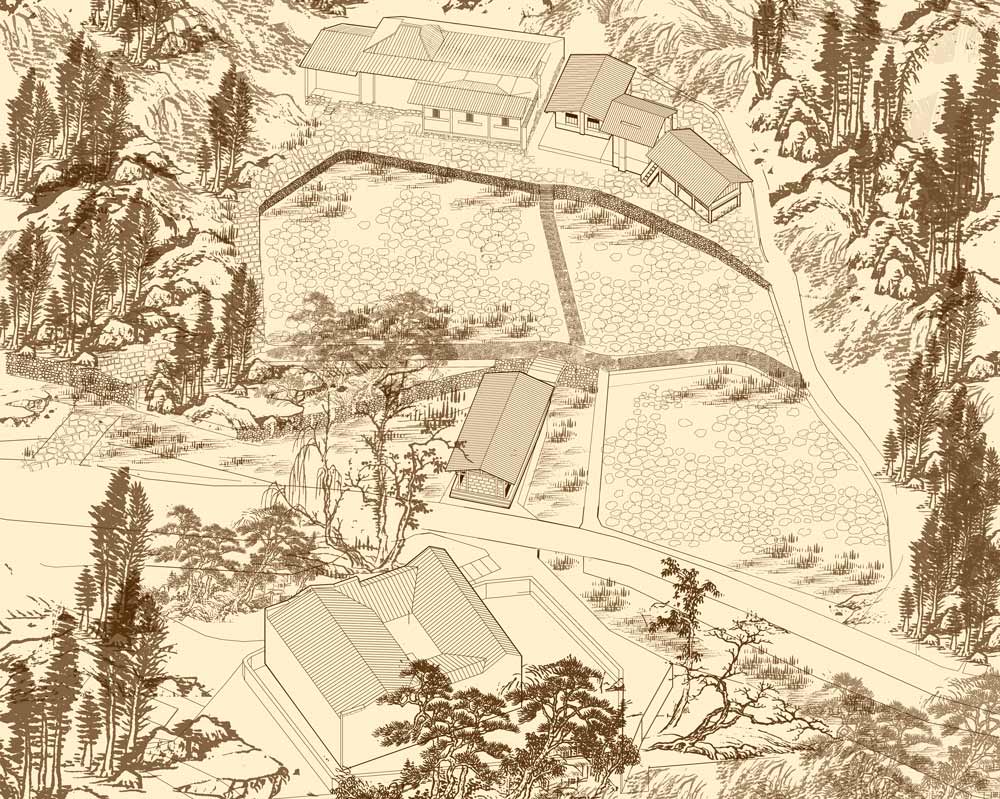 The regeneration of Shuikou area is part of an important node construction in Shangping village, as was the case with Yang’s School area and Tai Fu Tai Mansion area. Under the premise of protection, the design team has neither used the common way of “repairing old as old”, nor created the trendy mode of vernacular bed & breakfast. On the contrary, the design team has selected and transformed a number of abandoned agricultural facilities and infrastructures, such as cowsheds, pigsties, barns, and bamboo shoot squeezers, implanting upgraded industries, complementing tourism service facilities and providing a new economical platform. Based on the principles of locality and contemporariness, the design team has also designed cultural and creative products and has provided business guidance and promotions, which could be described as an integral service from conceptual planning to spatial construction and the provision of tourism products and promotion. 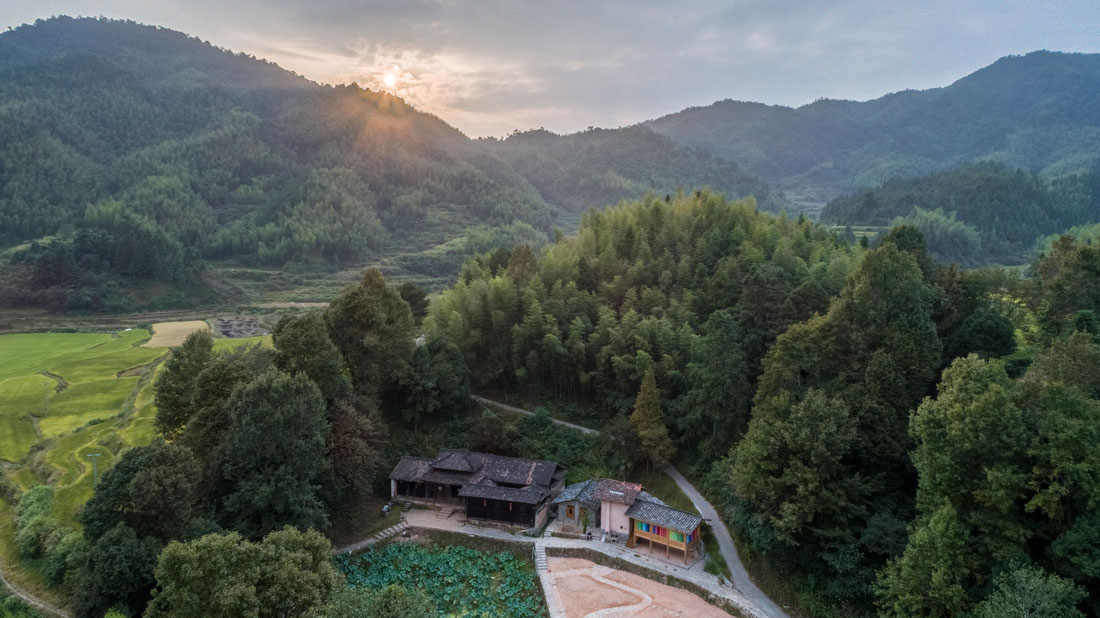 1. The site condition: vital location, but in urgent need of improvement

The Shuikou area is the village entrance, as well as it serves worship activities to ancestors and divinities. The existing buildings include the Shezumiao Shrine, the Yang’s Ancestral Temple, a gallery pavilion, a tobacco-curing house and a debris shed. An ancient bridge, a magnolia tree, and lotus ponds constitute the landscape elements to integrate with the buildings.

Apart from the Shezumiao Shrine and the Yang’s Ancestral Temple, the rest of the buildings were not in their best condition. The gallery pavilion was once hastily built for blocking off water in the 1980s as a result of constructing the motorways that destroyed the feng shui pattern. The main structure, built with rubble stone, was heavy and shoddy. Its closed form was not conducive to internal use and also blocked the sight of the entrance into the village. The abandoned tobacco-curing house and debris shed were also negative elements. 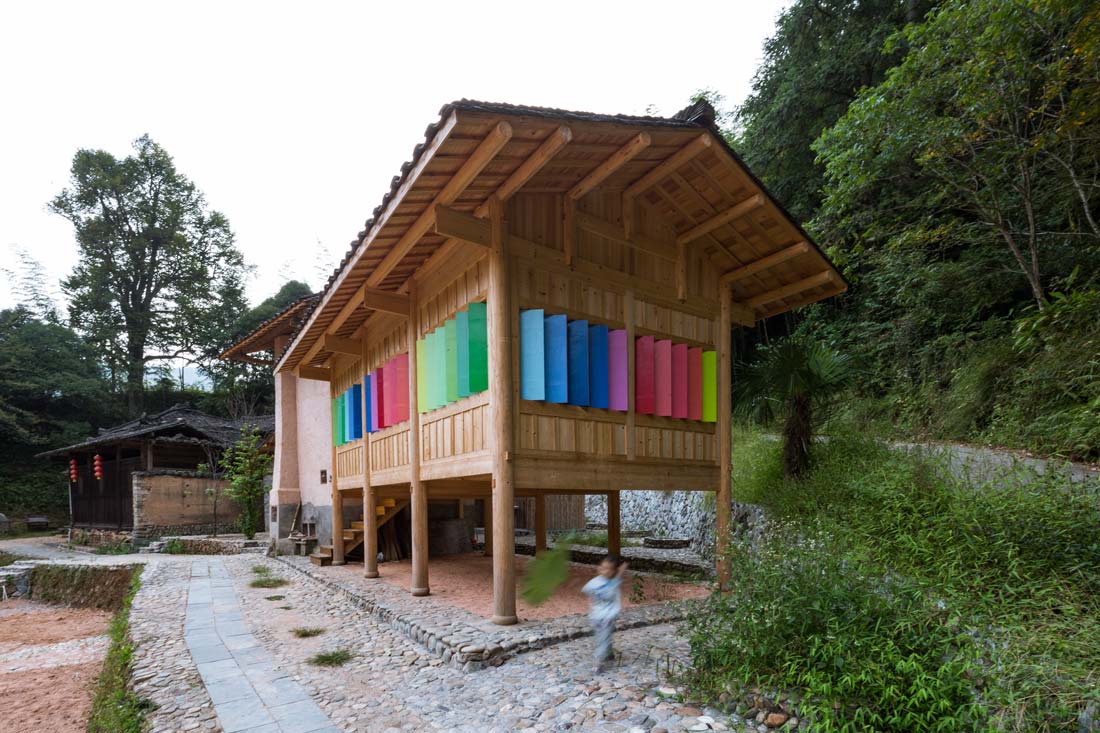 The Shuikou area is the gateway to the village, with cultural heritage and landscape elements while in lack of service facilities for tourists. The location of the original gallery pavilion was very important as it is the landmark when entering the village and the conjunction connecting Yang’s Ancestral Temple and Shezumiao Shrine. However, the original pavilion failed to meet these demands and needed transformation. In addition, it was also vital to completely re-use the abandoned buildings.

3. Transformation techniques: newness permeated in the old in an artistic manner

The design team neither deliberately pursued the retro form, nor used an overly modern, urbanized form. Several new buildings at the village node aim to present this new style with the intention to keep locality at the same time, so that they preserve newness and antiquity. 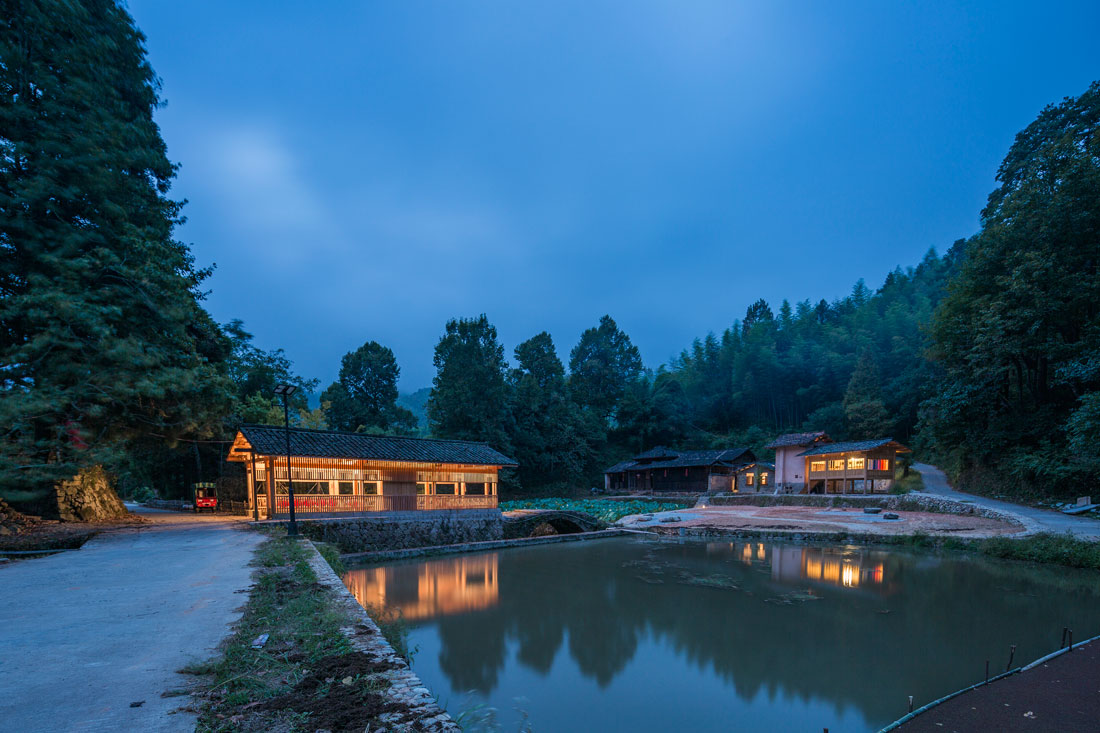 Yang’s School area is located at the intersection of the two streams in Shangping village, where two main trails branch off from the entrance. This is the reason for being important geographically. According to a legend, Mr. Zhu Xi, a national historian and educationalist, had lectured in Yang’s School and created great poems as well as calligraphy. The design of this part aims to transform this historical site into a tourist spot and unveil the great history of Shangping village. 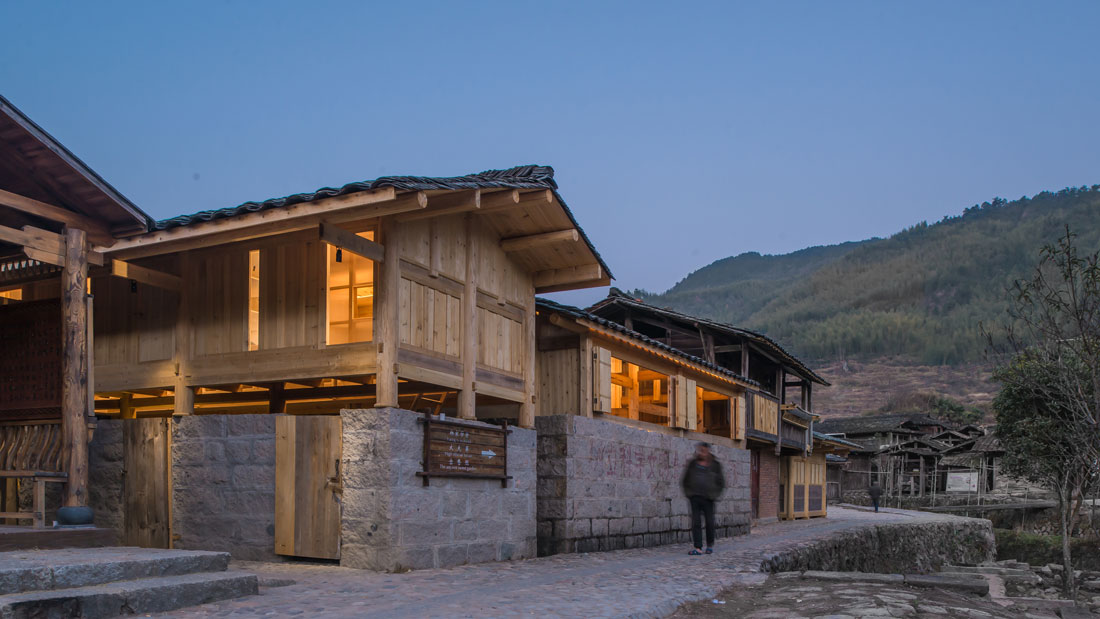 The design includes a few deserted agricultural buildings, such as utility rooms, cowsheds and barns. The design team hopes to transform the original buildings into a library, which will provide space for tourists to learn about the history and culture of the village. Meanwhile, it will also provide locals, especially children, with a place to get knowledge from the outside world. This gives us a great opportunity to mention a well-known Chinese tradition: “Cultivation and reading is to bequeath to the family”. 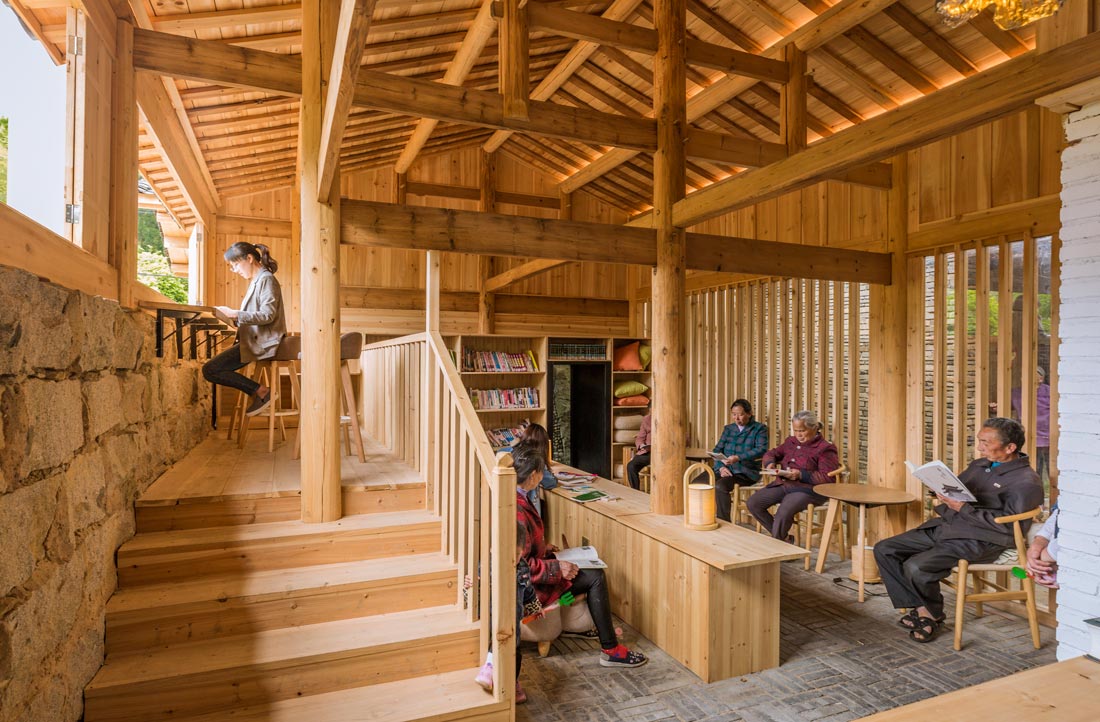 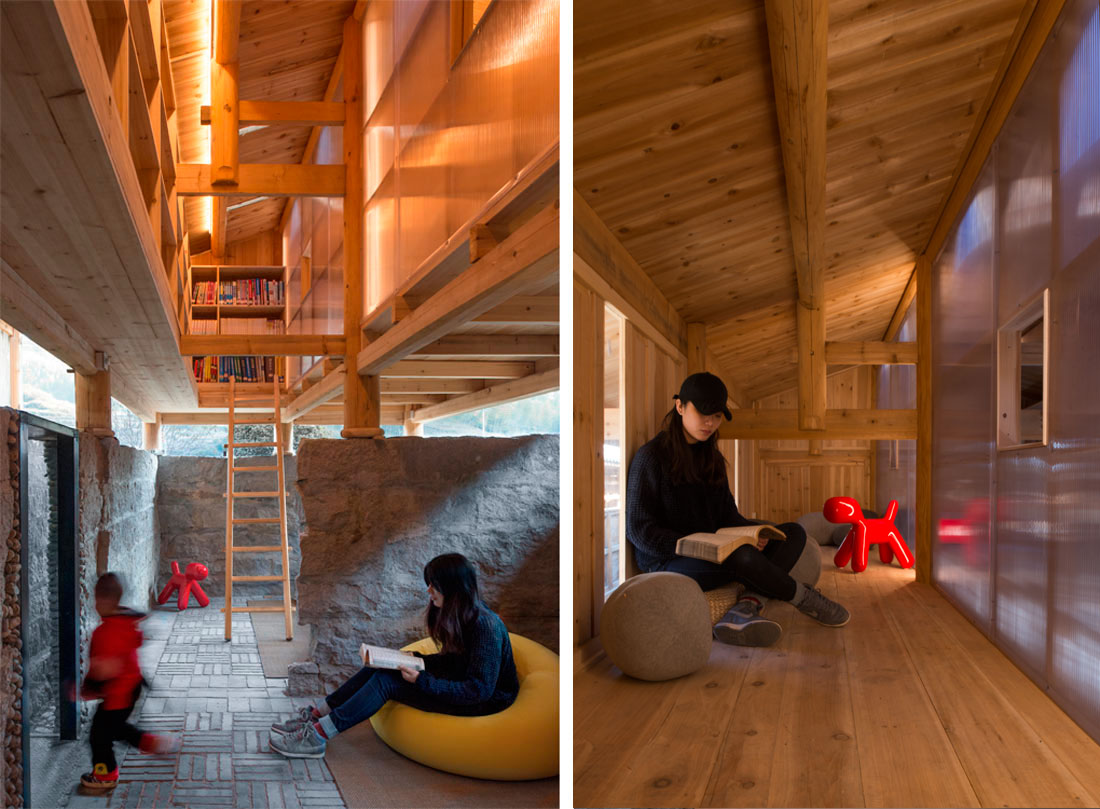 Interiors of the bookstore © Zhou Meng

The last design area of the Shangping village regeneration is somewhere hidden inside the village. It is located on the east stream. According to the legend, a giant house named ‘Tai Fu Tai Mansion” was built here by a famous government officer after retirement. The gate tower is well preserved, but the main building was destroyed by a fire many years ago, which is quite regretful. The original cultural elements and landscape such as the pond, ancient wells, bamboo shoot squeezers, the gateway and the ancient stage ruins are being used by designers for the regeneration. Some unused structures such as a pigsty and a shed are obvious on site, which will remain to be major landscape elements. Actually, these existing structures become great sources of new types of businesses, as well as village revival items. 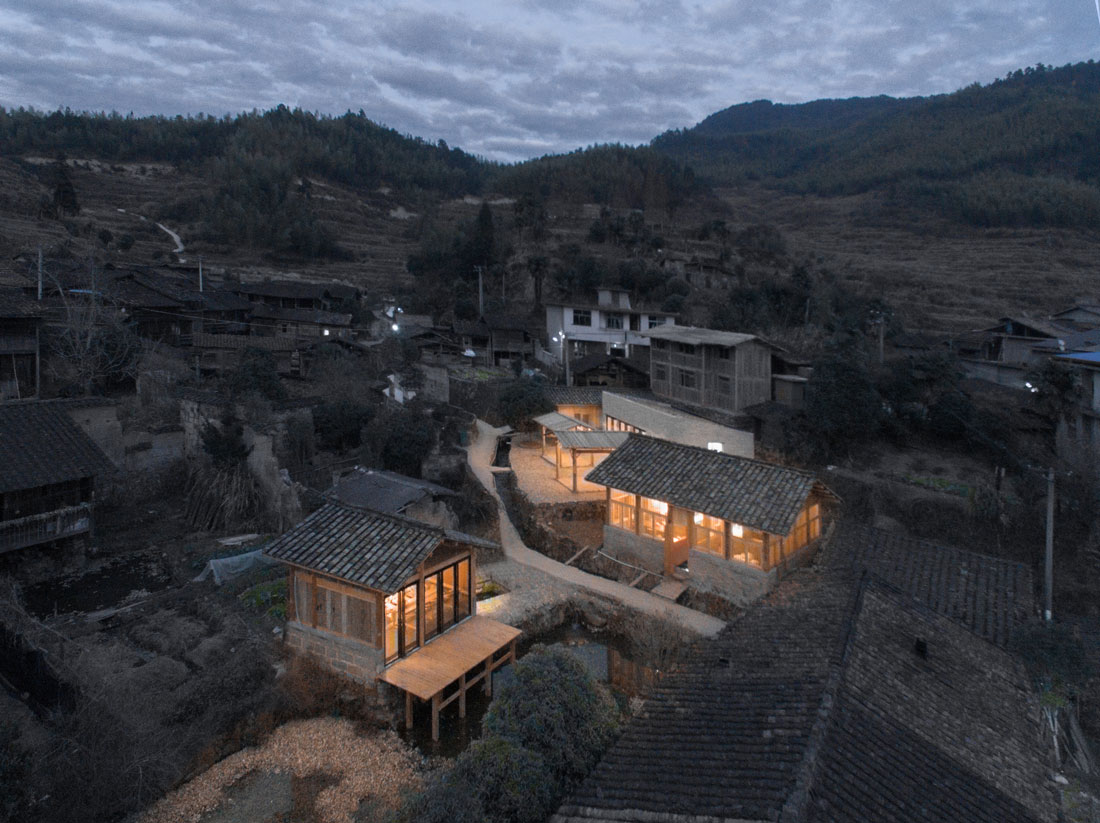 The special location and culture of Tai Fu Tai mansion make it a great attraction for tourists. However, the lack of public spaces such as restaurants and visitors’ centres impact the tourism industry and local economy. The design team renovated unused spaces by plugging in new programs, such as transforming pervious production spaces into cultural/commercial use. A series of cultural products and activities attached to these spaces also have a strong appeal to travellers. It makes a lot of sense to combine cultural industry and spatial design together for rural renovation. 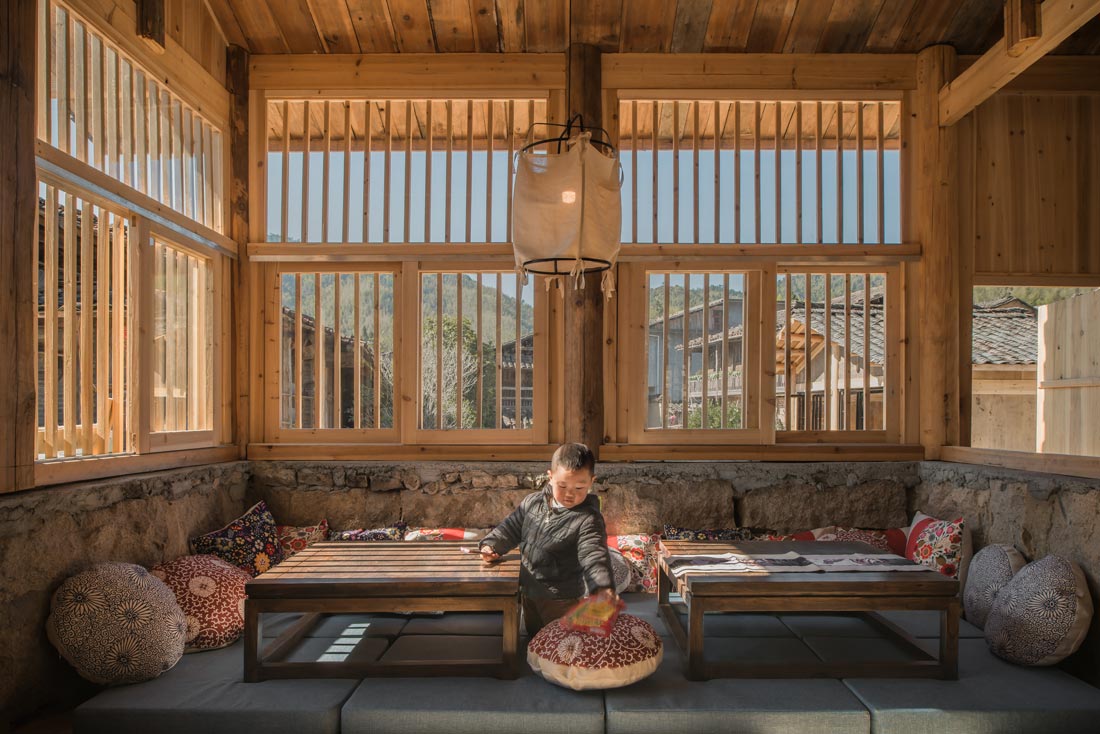