The historical center of Oberhausen raises the question of how centrality, urban density and public spaces beyond commercial uses can be realized in light of economic structural change. As an answer to this question, the city’s property management company OGM (Oberhausener Gebäudemanagement GmbH) has proposed a development that integrates two very different uses in a new way. For the first time in Germany, a building is being constructed that combines functions as diverse as a job center and a rooftop greenhouse where the possibilities of urban agriculture are practiced and researched. The building technology integration makes the office building, located on the central market square of the old town, usable as a resource for agricultural production.

Kuehn Malvezzi was the winner of the architectural competition in 2016. The design, developed in collaboration with landscape architects atelier le balto, adds a third element to the two uses, going beyond the original brief. A vertical garden is an effective urban planning element that purposefully combines old and new landscape typologies into a public space. The varied course leads visitors from the lime-tree-lined market square up steps and platforms, past climbing plants and seating areas, up to the roof. Once at the rooftop, the view opens up over the center of the historical center of Oberhausen and creates a new view of the city. The vertical garden ensures that, although the research and production greenhouse on the roof is located high above the city, it is still closely linked to it. 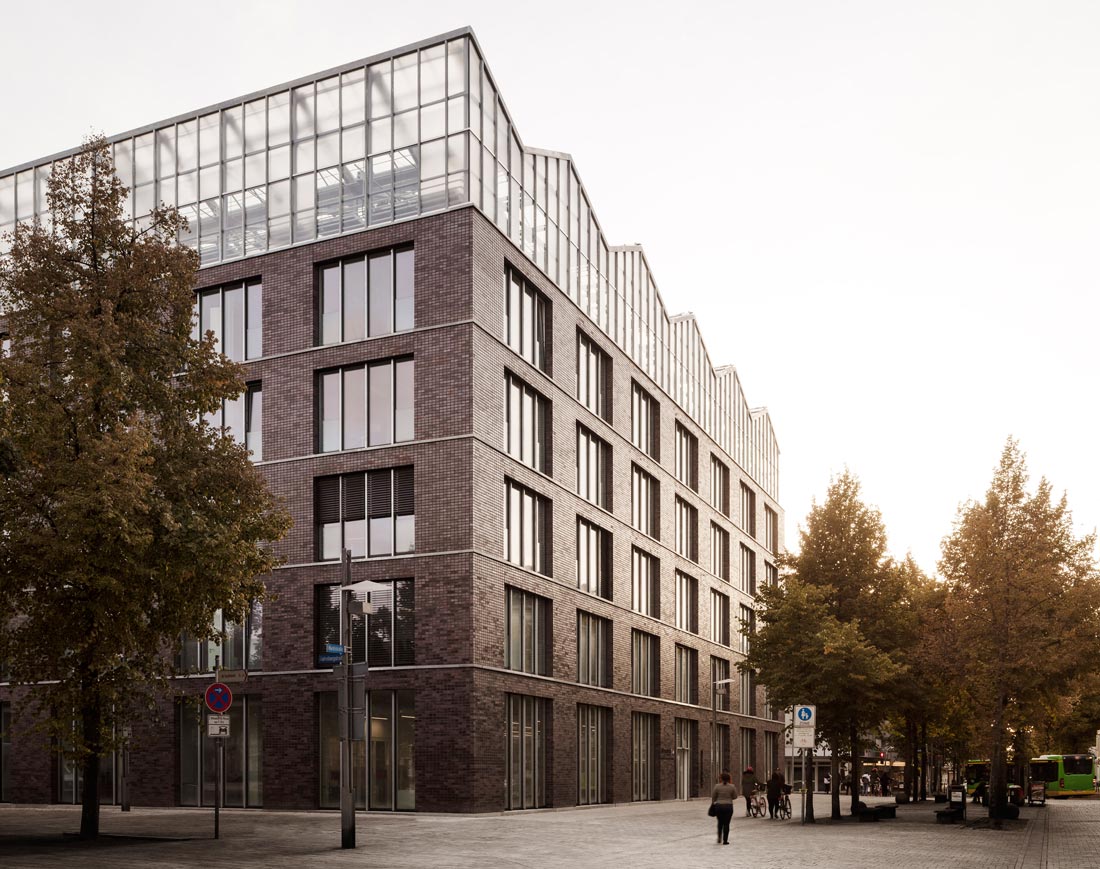 Center at the Altmarkt

In 2014, the city conceived the innovative project with the aim of promoting sustainable urban development that combines production, work and public spaces with a high quality of living on the Altmarkt. In the historic urban space along Marktstraße, vacant buildings, dollar stores and amusement arcades still tell of the decline of the old center of Oberhausen. With the Gutehoffnungshütte, Oberhausen was once home to one of the largest mining and mechanical engineering companies in Europe. The economic changes that began in the 1960s hit the city hard. Colliery after colliery were closed and tens of thousands of jobs were successively lost. Since the early 1990s, the former industrial area of the Gutehoffnungshütte has been transformed into a shopping and leisure area of considerable size. The opening of the Centro shopping center in 1996, now known well beyond the Ruhr area, also resulted in a further loss of significance for the historical city center. Against this background, and through the combination of two situations that were initially not connected, the urban development project was created bringing life into the city center. The job center was looking for a centrally located site, while the Oberhausen based Fraunhofer Institute for Environmental, Safety and Energy Technology (UMSICHT) was looking for an opportunity to realize its concepts in the area of building-integrated agriculture. The city of Oberhausen brought the partners together with the aim of creating a sustainable work and production site in Alt-Oberhausen. The combination gave rise to the idea for the administration building with a rooftop greenhouse project at the Altmarkt. Ultimately, funding from the federal program “Nationale Projekte des Städtebaus” (National Urban Development Project) created the conditions for the architecture competition in 2016. 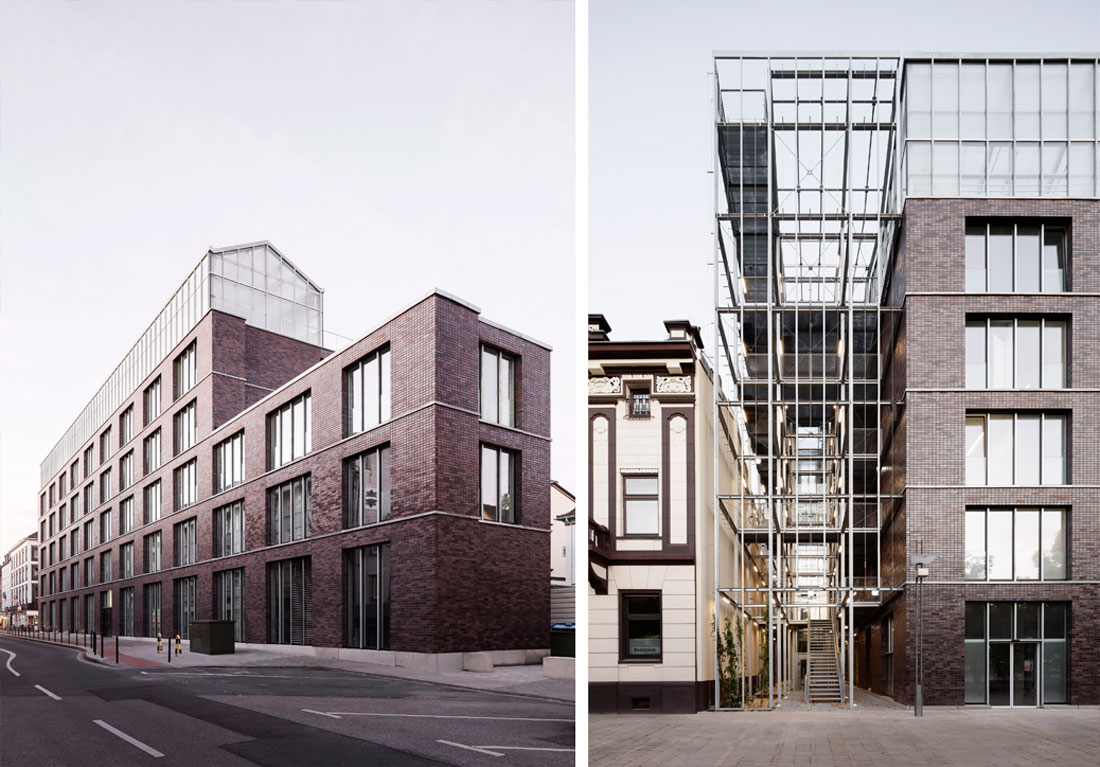 Building on the Square

The building, designed by Kuehn Malvezzi, blends confidently but calmly into the historical city. As a new addition, it joins the ensemble of public buildings whose striking brick façades shape Oberhausen’s cityscape. These include the town hall (Ludwig Freitag, 1928), the Bert-Brecht building (Otto Scheib, 1928) and the former main warehouse of Peter Behrens’ Gutehoffnungshütte (1925), now part of the LVR Museum. The brick cladding is consciously revealed as a façade instead of giving the impression of being solid. The stacked bond brickwork produces an atectonic visual appearance.

The specificity of this important urban location at Altmarkt results from the tension between the physicality of the brick building and the filigree lightness of the rooftop greenhouse, planned in cooperation with Haas Architekten. From the regularity of its structure, the greenhouse on each of the three sides of the street forms its own conclusion, which responds sensitively to each context. On Marktstraße, it appears clearly legible as an independent structure. At the Altmarkt however, it develops a clear visibility with its high ridge front, while the vertical garden communicates as an open, green link to the smaller, neighboring building. On Friedrich-Karl-Straße, the building connects, via several steps, to the adjoining buildings. The greenhouse commences on the eaves and ends flush with the recess of the building.

The three elements of the office building, the greenhouse and the vertical garden are modularly related to one another. A galvanized steel structure takes the basic dimensions as a starting point and varies them in different components. Vertically, it forms a division in the office windows, in the glass of the greenhouse wall and the metal trellis. Horizontally, the platforms of the trellis continue story by story on the surrounding window sills. The utilization of standardized components enables both a more economical construction and efficient operation. 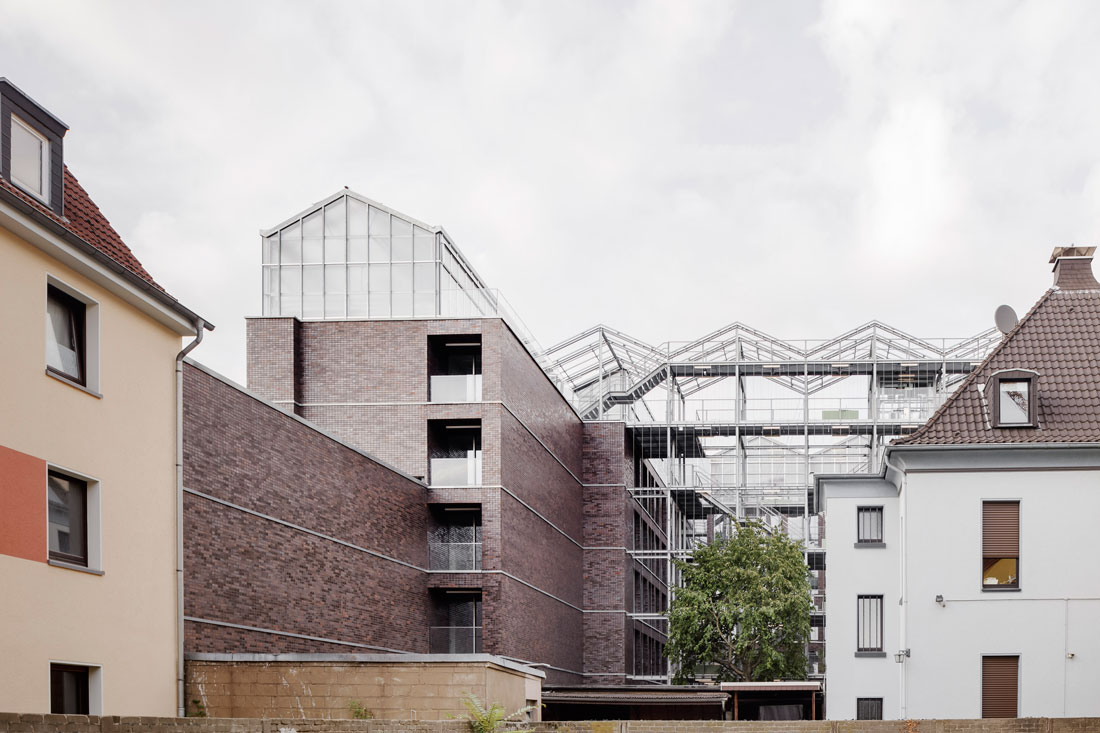 Floor-to-ceiling windows, exterior views and structural clarity give the rooms inside the building a generous feeling. Contrasting with the clinker cladding, the foyer on the ground floor is designed to have a raw, visible finish. The concrete construction is exposed, suspended ceilings were dispensed with in favor of the experience of the full room height, and the building services are installed visibly. In cooperation with the Berlin agency Double Standards, a signage and information system was designed that offers easy orientation within the job center.

The warehouse typology of the building is sustainable in terms of adaptability to possible future developments of the city. With comparatively simple means, the office building can be flexibly transformed into living spaces, and a combination of inner-city living and working can be realized. 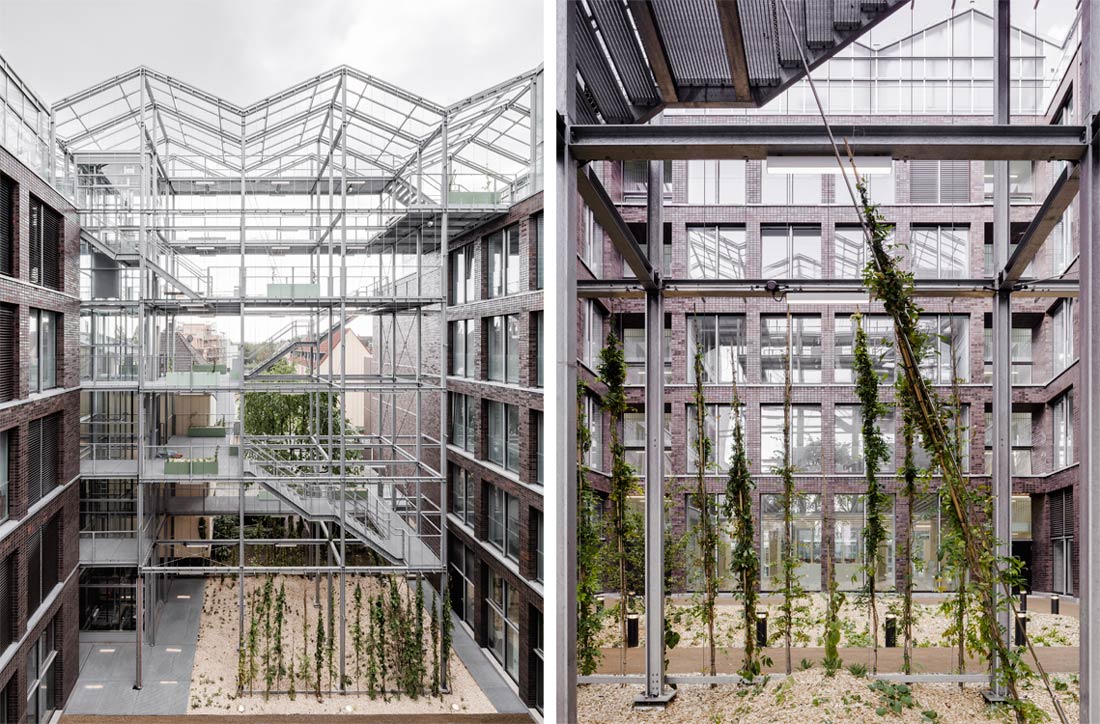 The vertical garden is the spatially visible link between the traditional Altmarkt, where a market is held six days a week, and the rooftop greenhouse as a place of agricultural production. The basic structure of the green space consists of an open steel frame supporting platforms, staircases and a freight elevator, which also serves as a trellis for the various climbing plants. Sealed surfaces were completely omitted from the exterior of the project, which is also a new step. Hardy plants such as the crimson glory vine, common hop, Chinese wisteria and climbing hortensia have their roots at ground level. A bed of small shrubs and ground coverers marks the entrance to both the vertical garden and the inner courtyard. A seemingly floating surface of galvanized steel grids makes it easy to walk over the bed to the first staircase. New plants are added to the garden on each floor. Chocolate vine, hardy kiwi and Himalayan clematis are more delicate plants that climb up from the plant troughs and make the walking experience that much more varied and rich. Benches at this point invite people to enjoy both the views of the square and the garden in the courtyard. The rooftop greenhouse is a highlight of the route, with a balcony at the end of the walk offering a view over the town and market square – itself the starting point for the walk and the place where produce from the greenhouse can be purchased. 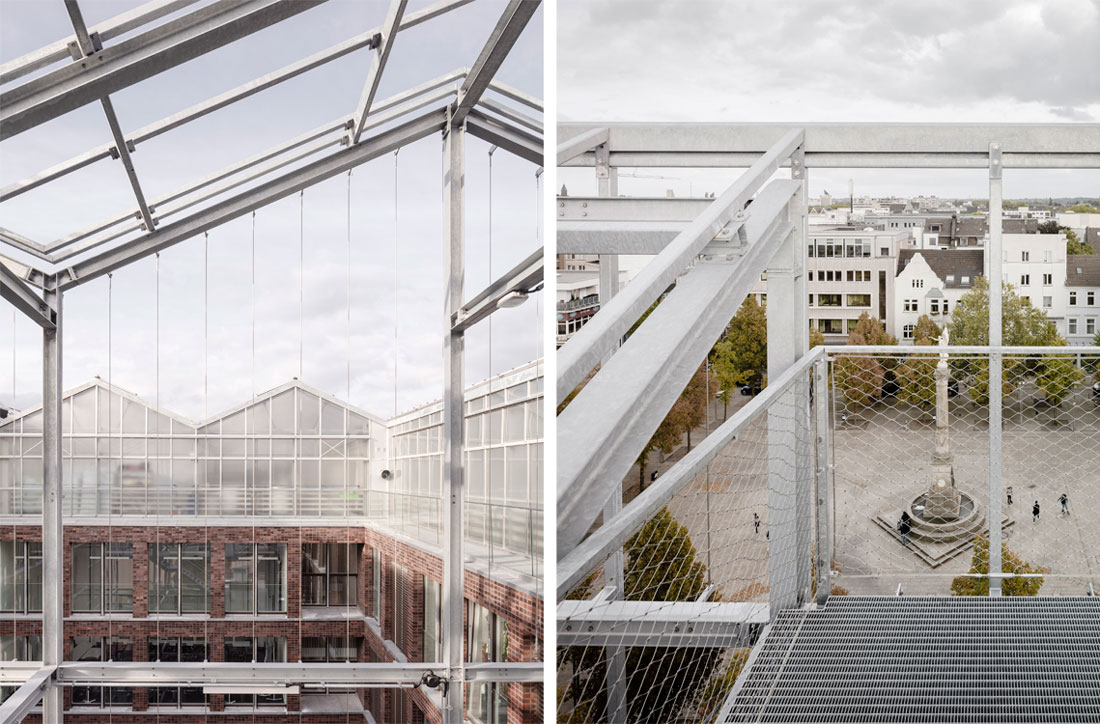 The rooftop greenhouse with a U-form following the inner courtyard is operated by the municipality and will be regularly accessible to members of the public. Here, the three sides of the building, which respond to three different urban situations, can be experienced from the inside. Rolling plant tables and various work stations structure the area. In three climatized spaces, different cultivation methods (ebb and flow systems, water basins, pyramid-like grow beds) are used for salad greens, herbs and strawberries. The area intended for research and development is arranged along Friedrich-Karl Straße. The Fraunhofer Institute will research further technical systems and synergies for the optimization of food production in the field of closed-loop material flows and material development. A seminar and conference room located on the fourth floor offers additional space for events, cooperation and training. 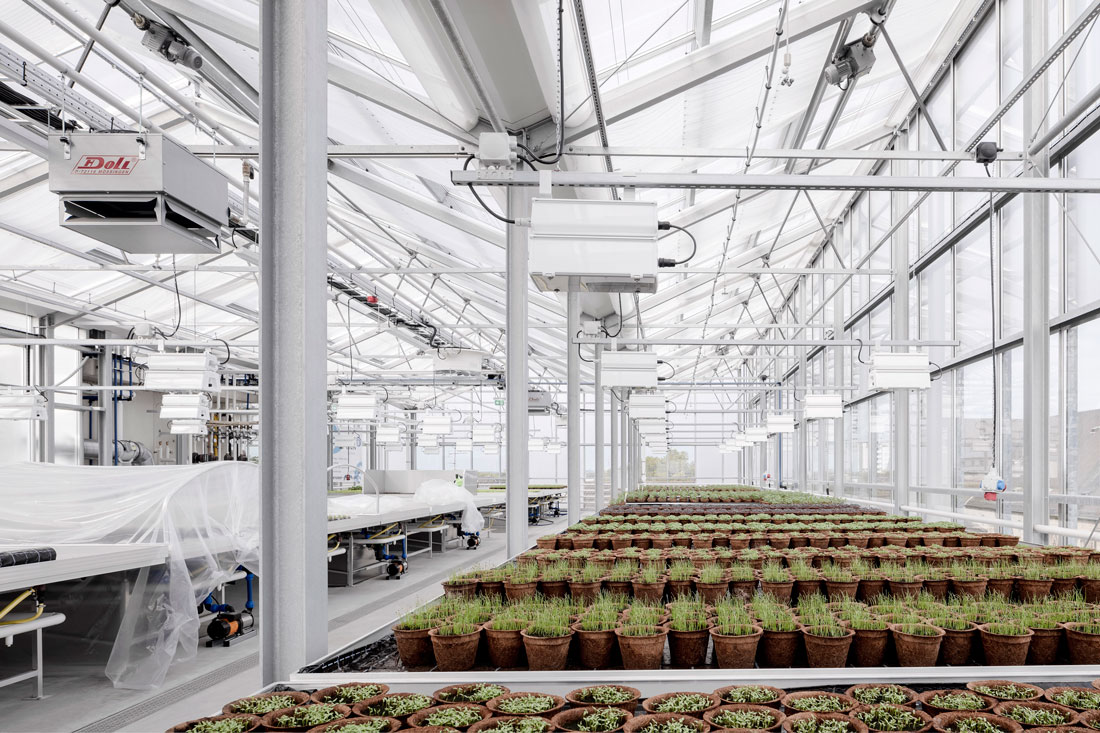 The integration of building services, which was investigated in feasibility studies and has been implemented here for the first time, means that various functions can benefit each other. Air removed from the office building, for example, is fed into the greenhouse, where waste heat and CO2 can promote plant growth. Rainwater harvested from the roofs is collected in a cistern and used to water the plants. The grey water from the sinks and washbasins is treated and reused as service water, partly for flushing toilets in the office building and partly in the vertical garden. In the research area, the use in horticultural production is being investigated. The separate collection of all types of wastewater ensures that even more far-reaching synergies can be established in the future. 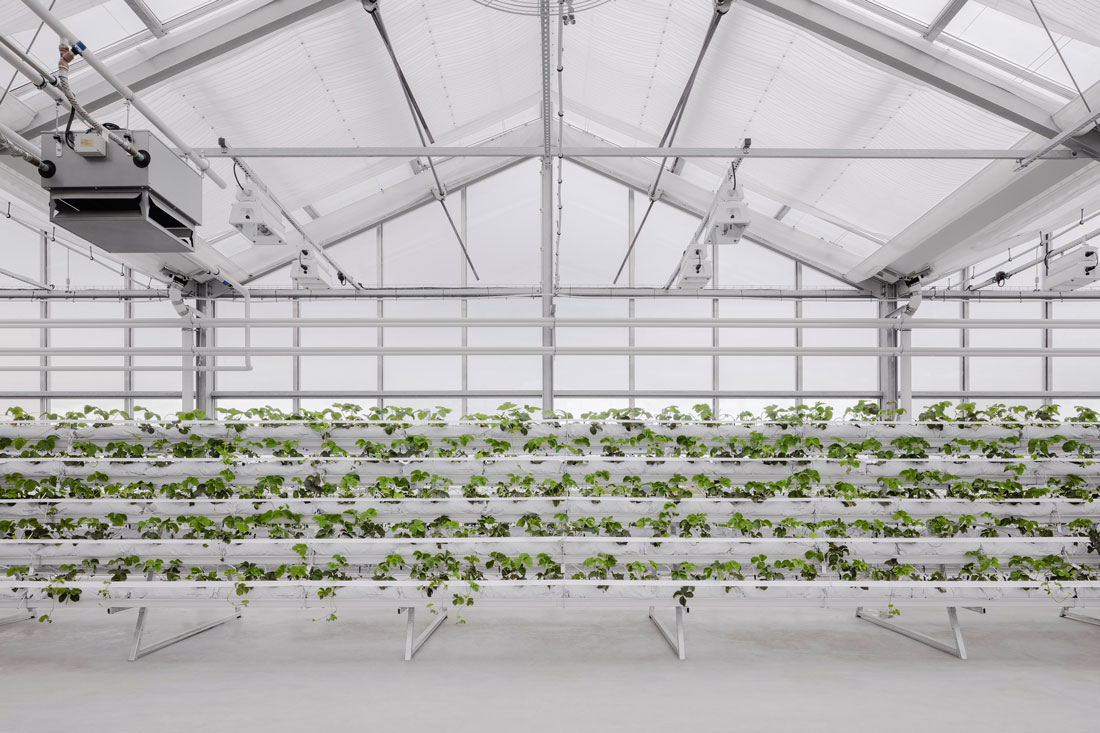 The courtyard can be experienced from different levels, each offering a different perspective. From the offices and the trellises, it offers a pointillist impression. A self-binding gravel surface frames the topography, which forms drier and more humid zones with height differences of up to 60 cm and represents a suitable habitat for various plants. The wave-like soil modelling accentuates the play with the colors and leaf structures of perennials, shrubs, ferns and grasses. Three shadbushes are the only trees present; they have multiple trunks, and bloom very early in the year. The selection of plants creates a summer picture dominated by a variety of green tones and a winter picture dominated by brown tones. From the open foyer of the job center with its floor-to-ceiling windows, the view over the courtyard drifts towards the vertical garden.