With the rooftop greenhouse Agrotopia, van Bergen Kolpa Architects (NL) and META Architectuurbureau (BE) have delivered Europe’s largest public building dedicated to urban food production, a commission from the Flemish research institute for agriculture and horticulture, Inagro, and REO Veiling.

With its faceted glass frontages, monumental entrance staircase and stacked functions, Agrotopia gives a striking, architectural face to horticulture on the city’s rooftops. Through innovative water recovery and by reusing urban waste heat, Agrotopia enters a circular symbiosis with the city. 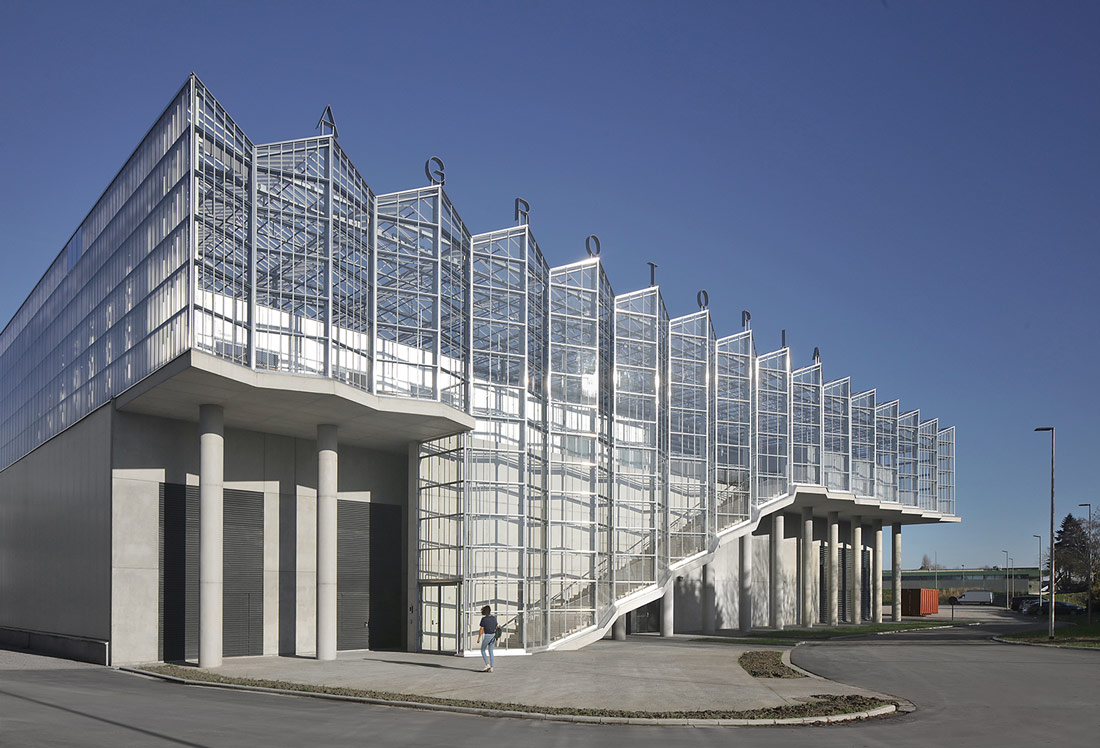 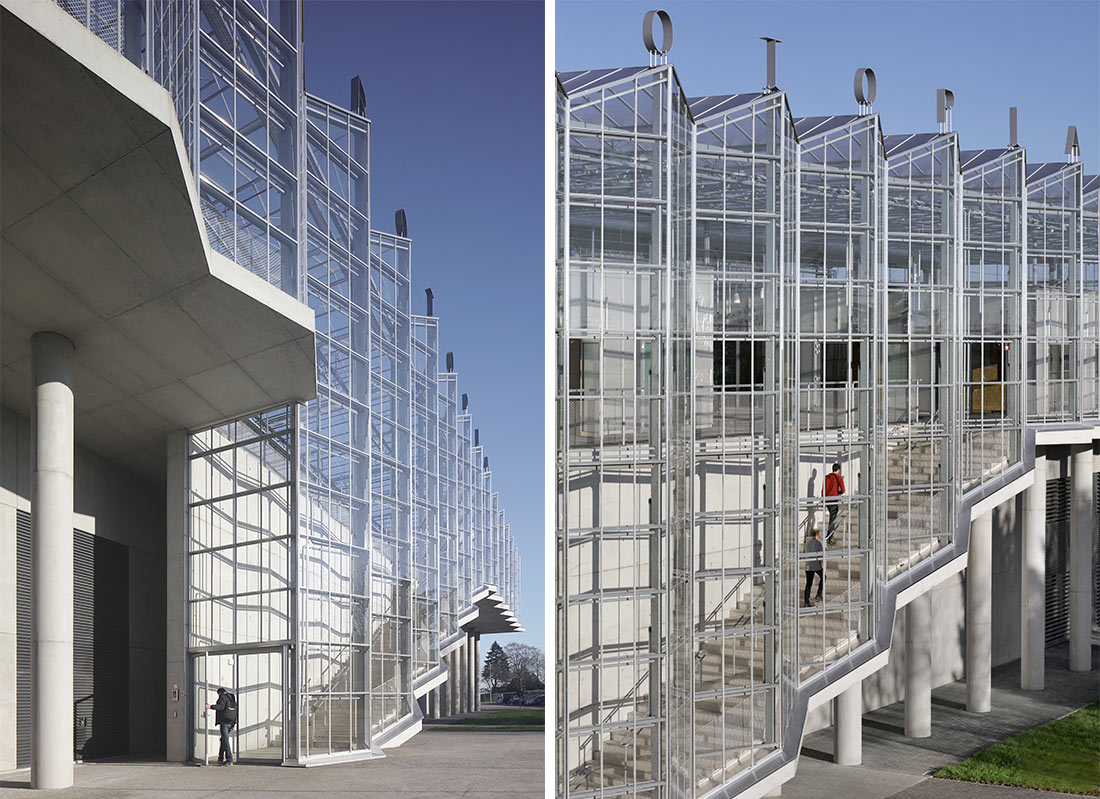 Agrotopia was constructed on the roof of the REO Veiling headquarters: the logistic heart of West Flanders for fruit and vegetables. With a spectacular view across the expansive landscape and the city, urban horticulture atop industrial rooftops is afforded a prominent place in Roeselare’s skyline.

“Together with the clients, Inagro and REO Veiling, we have realized an ambitious building with numerous innovations: a single building featuring different climate zones, a sustainable and economical use of space, research into leafy vegetables and fruit in the city, opening the rooftop to a public function, circular use of space and energy, to name but a few.” Jago van Bergen, van Bergen Kolpa Architects 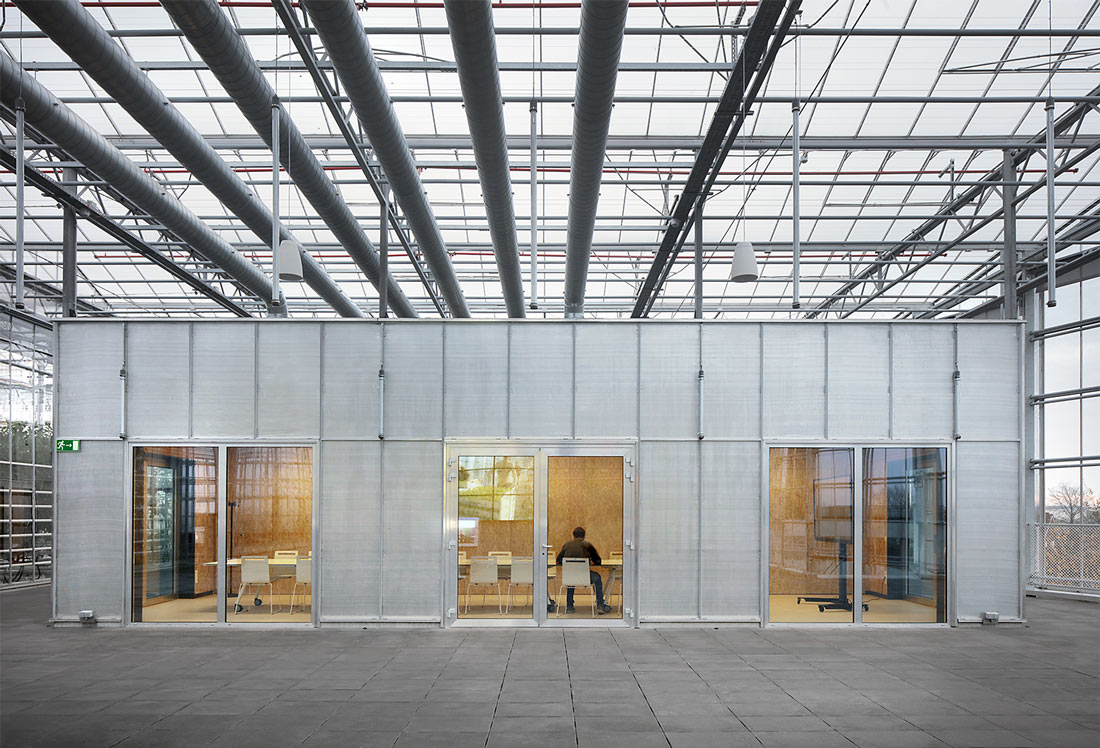 A Building for Research and Education

In the 9,500 m2 building, high-tech research facilities for the cultivation of fruit and leafy vegetables are surrounded by an educational trail for the general public. In four different climate zones, the cultivation of tomatoes and lettuce, but also peppers and strawberries, can be followed.

“Agrotopia as a test case: building a greenhouse atop an existing building has never been done before on this scale, and it presented many opportunities and challenges. The integration of the steel greenhouse with the concrete substructure and complex installations has resulted in a true public building with exceptional architectural quality for the city of Roeselare.”
Niklaas Deboutte, META architectuurbureau 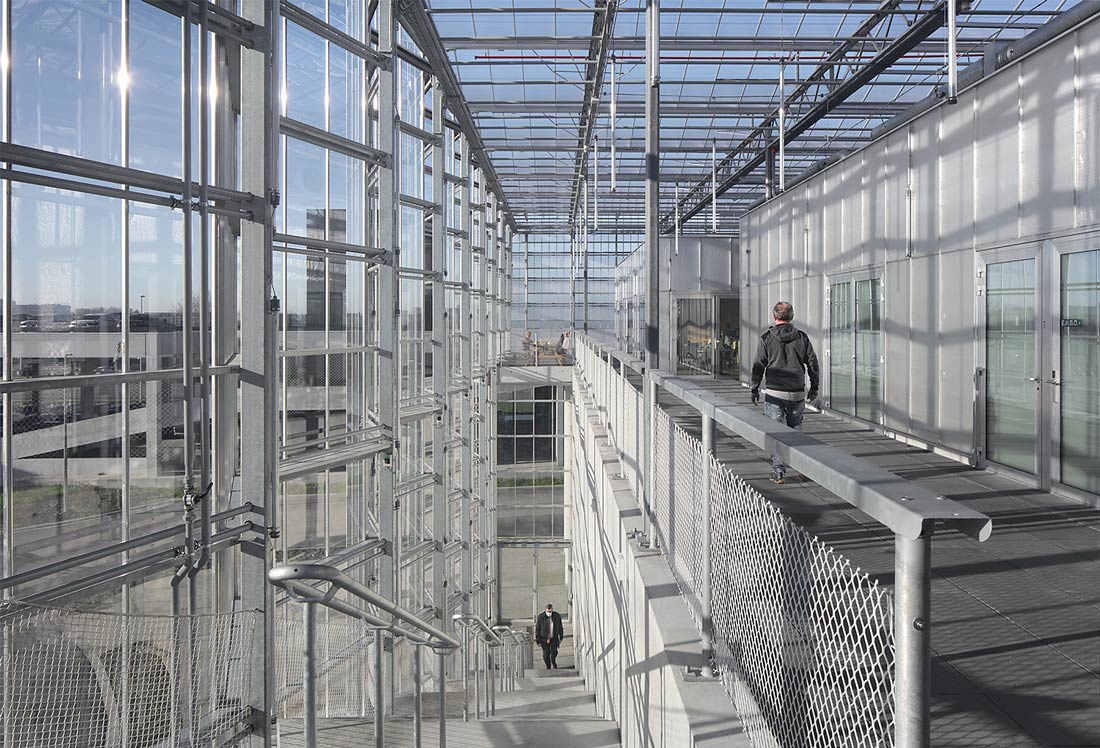 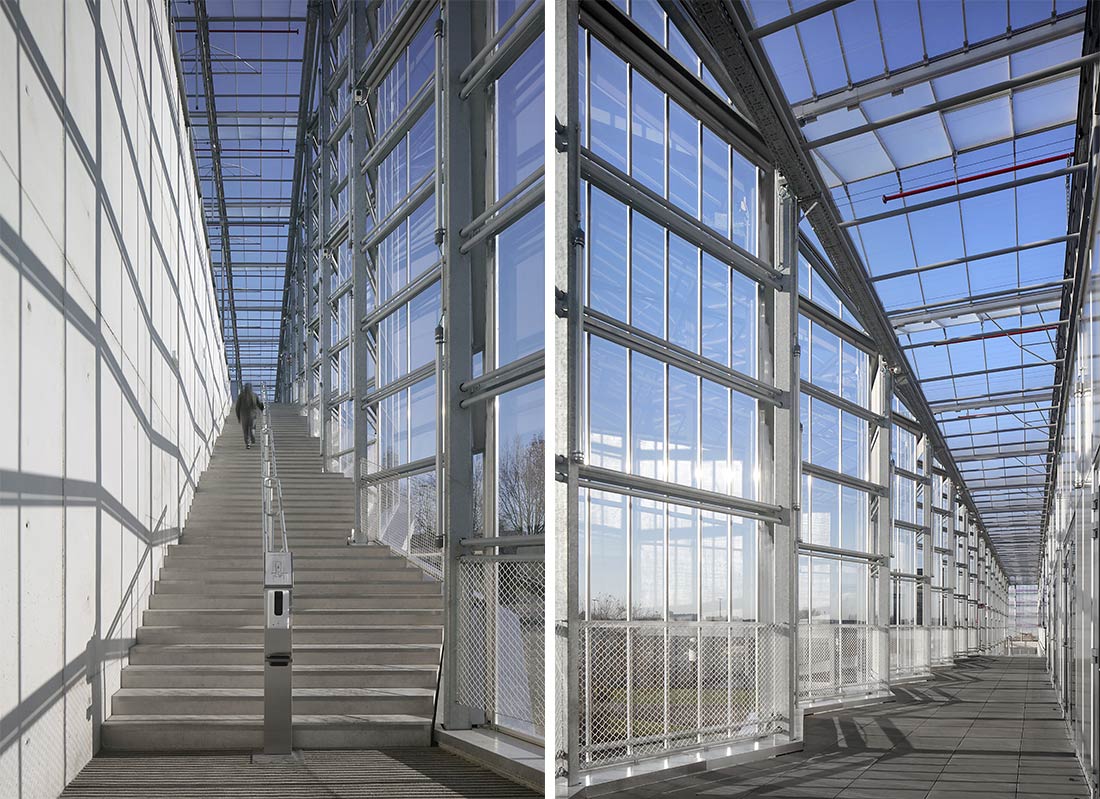 One of the challenges was to reconcile the needs for research facilities in a greenhouse, maintaining a warm and humid environment while fulfilling the requirements for visitor facilities. In Agrotopia’s greenhouse climate, it is not only plants that must thrive; it is also a place where people come to learn and work.

“To achieve this, box-in-box spaces were created for research and education with a climate adapted to people. For the public spaces, fogging is used to temper the wind chill on hot days.”
Frederik Ghyssaert, Tractebel engineering 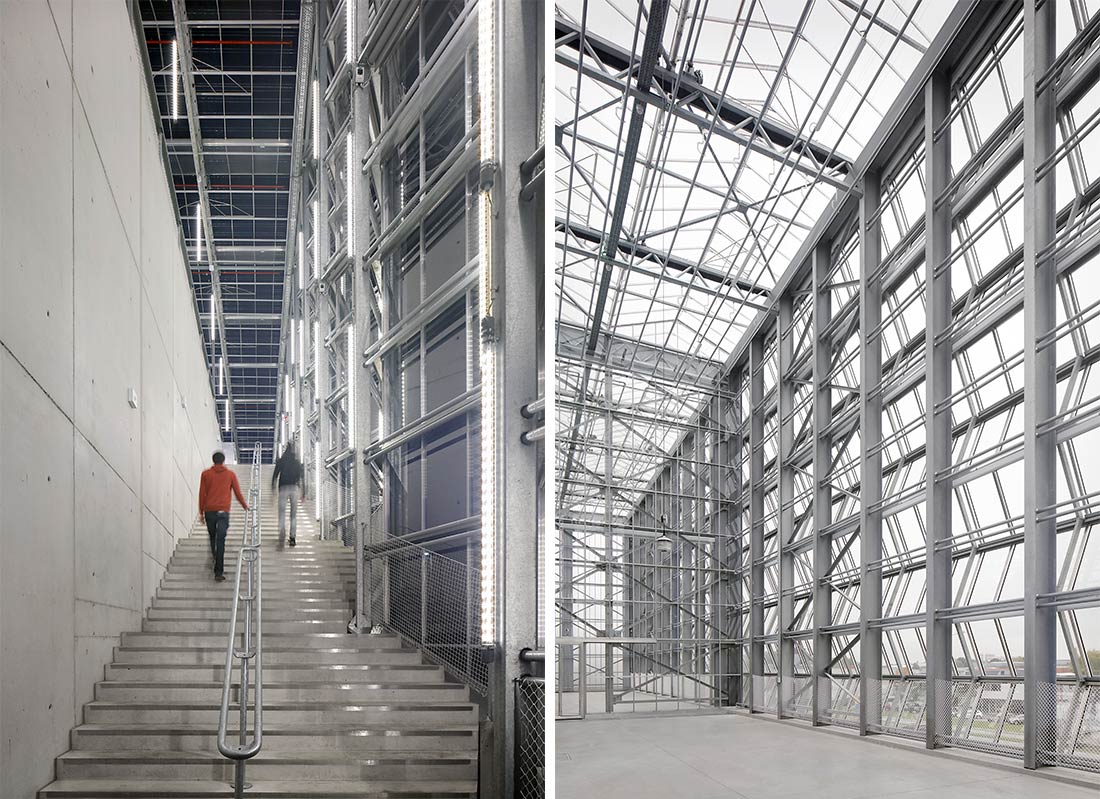 Agrotopia is a proud, transparent sculpture of steel and glass, which underscores both its agricultural and its public function. To this end, the architecture is composed of a slender greenhouse construction that stands out against the sky and rests on the concrete base of the crate sheds.

The entrance, with a broad ascending staircase, leads to the urban horticulture square at the heart of the building where the visitor facilities are located. A double-height greenhouse for innovative vertical cultivation can be found in the façade greenhouse along the ring road. The foot of the latter stores the rainwater from the roof, which is then used to irrigate the crops. 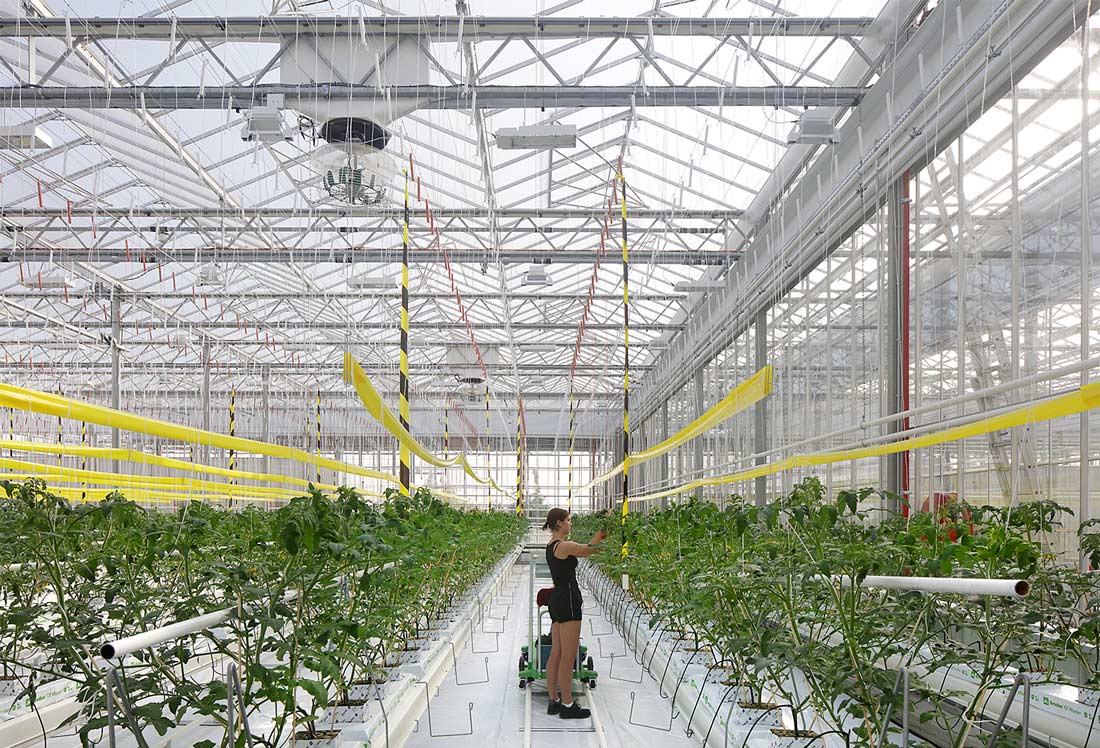 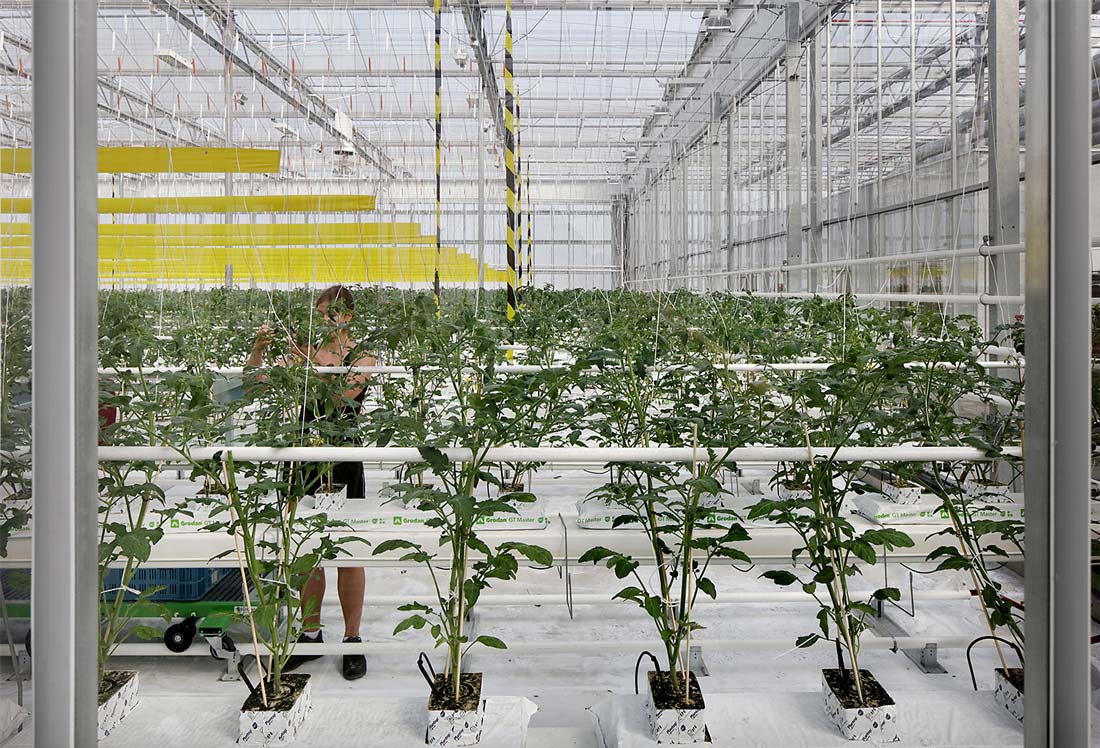 The entire building consists of one standard greenhouse with diffuse glass. The greenhouse on the two cantilevered building heads owes its striking appearance to the expressive, faceted façades in transparent glass. On the entrance side, it forms vertical glass bay windows, to which specific sunscreens could be added whilst also preserving the interior and exterior views. On the west side of the façade greenhouse along the ring road, the horizontal faceted construction guarantees a good incidence of sunlight for the crops and a reflection-free view at ground level.

“With Agrotopia we have differentiated and perfected the standard Venlo greenhouse.”
Jeroen Smiemans, Smiemans Projects 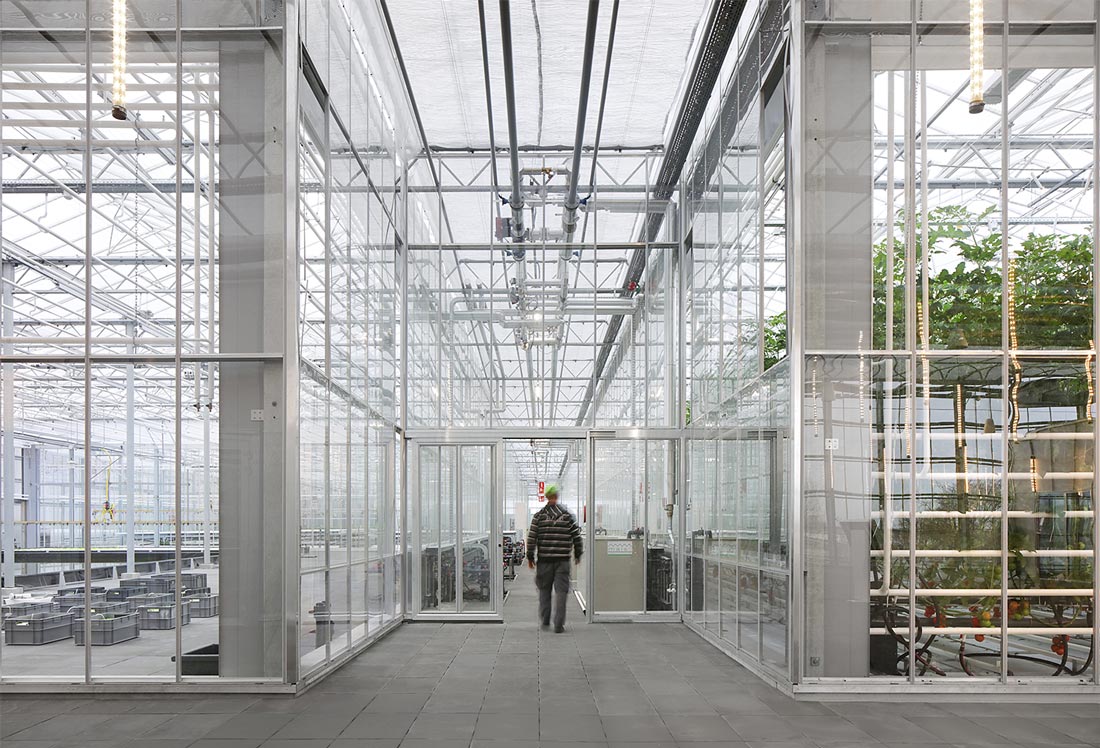 Sustainable and Economic Use of Space

The increasing and urgent need to use space as sustainably, efficiently and economically as possible has created a growing trend for urban agriculture, especially as a way of activating residual space in the city. In Agrotopia, two previously independent worlds – architecture and agriculture – are united in a single building dedicated to urban agriculture.

“With Agrotopia, we have created a unique location for practical research and the development of innovative techniques for greenhouses and urban agriculture. At the same time, this is the ideal place in which to conduct large-scale and professional research into the emerging field of urban horticulture. Thanks to the proximity of REO Veiling, where the growers convene, we strengthen the link between research and practice. We also want to use a visitor corridor in the greenhouse to give the general public a better understanding of greenhouse horticulture and contemporary agriculture and horticulture.”
Mia Demeulemeester, Chief Executive Officer, Inagro 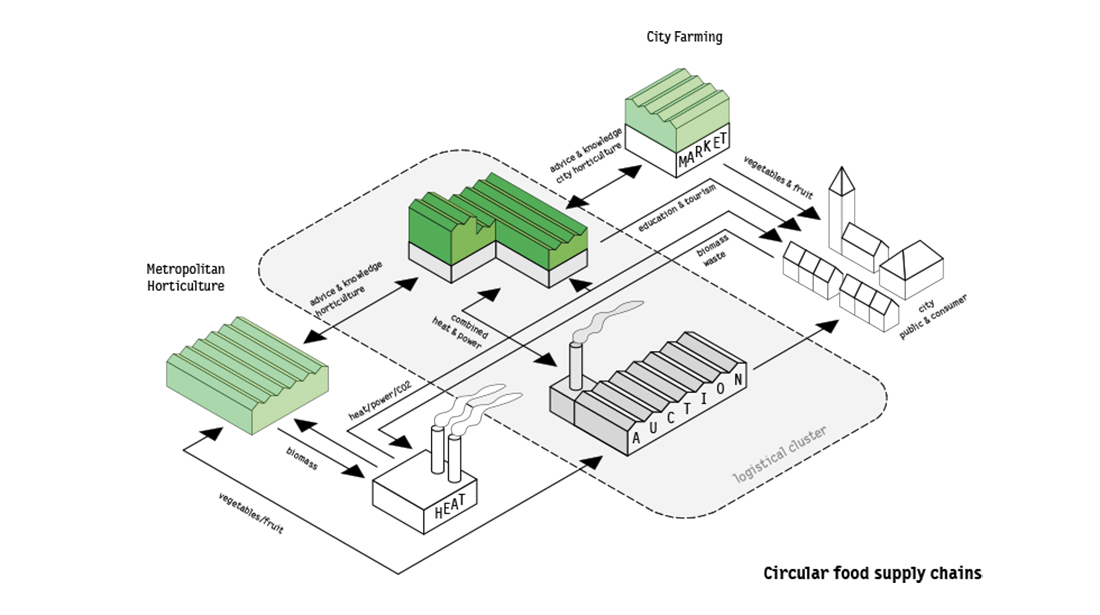 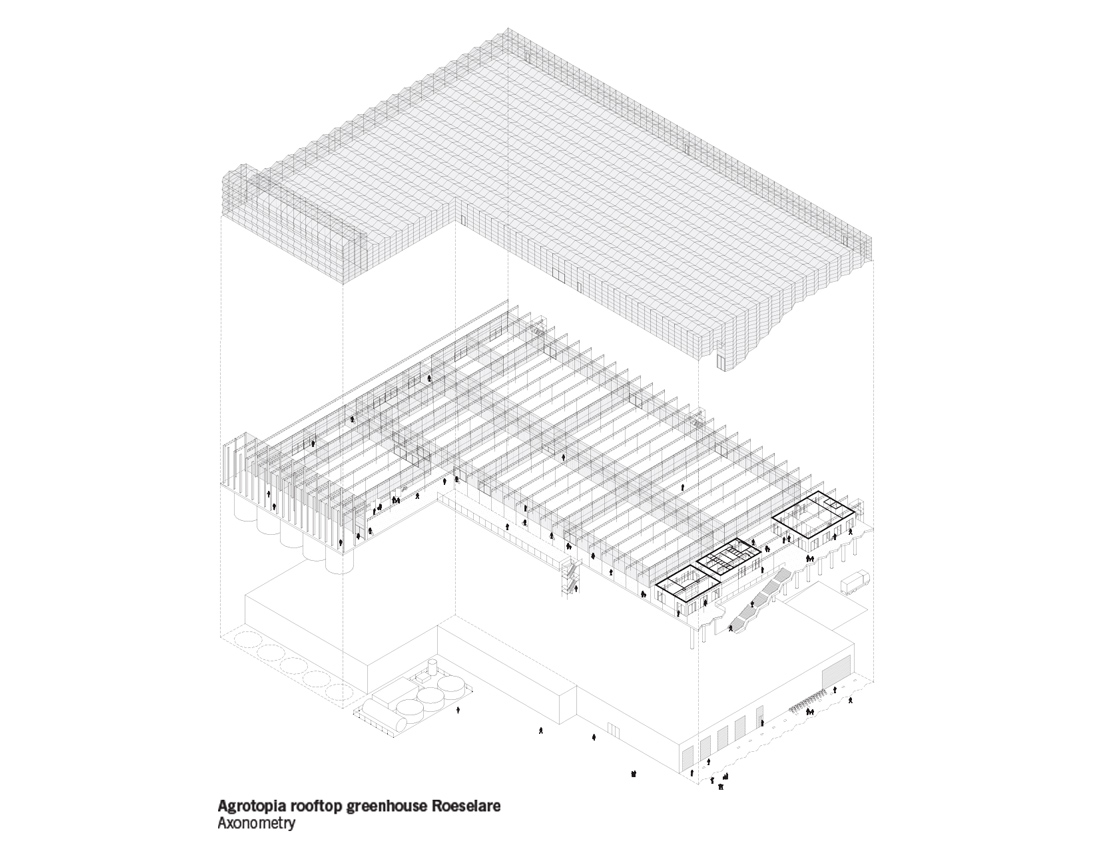 Circular Water and Energy Use

Not a drop of water is lost in this building. When irrigating the plants, the run-off is recycled and reused. The same applies to energy: the greenhouse is warmed by the surplus heat from the Mirom waste incinerator. In short, Agrotopia exists in a circular symbiosis with the city.

“Agrotopia: where the urban farmer of the future is trained. The next-generation urban farmer will not only learn how to grow both leafy vegetables and fruit; they will also learn how to work with new technologies and business models.”
Sjaak Bakker, Wageningen University & Research, BU Greenhouse Horticulture 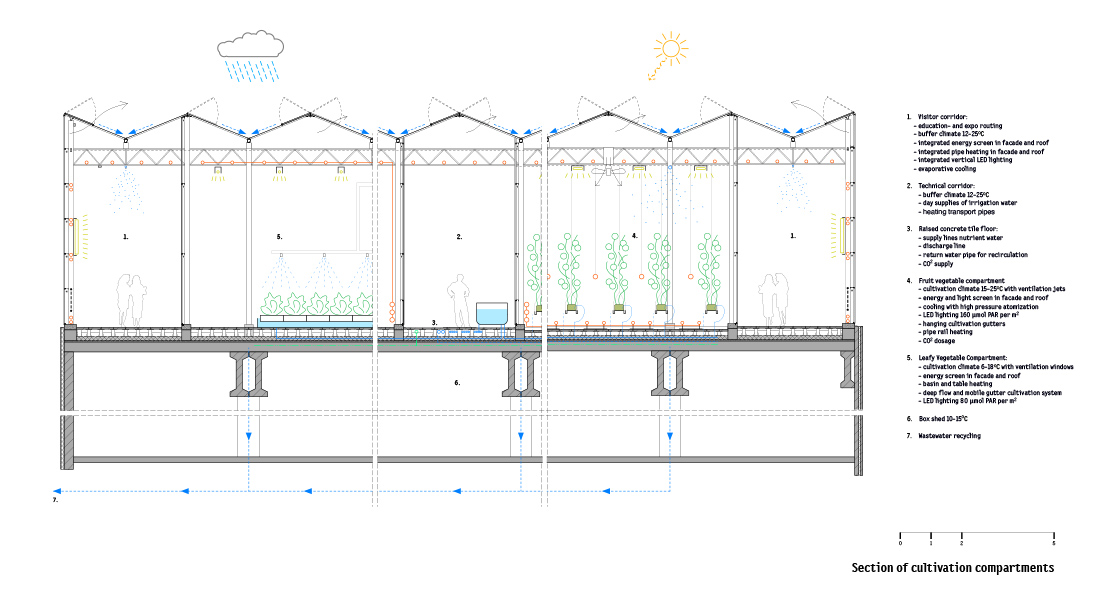