Roman Quarry Redesign: a Path Through the Rocks

Watching a performance in a Roman quarry is doubtless a unique experience for visitors. As a lover of classical music one can enjoy the opera shows, and as an inhabitant of the region one can attend the Passion repertoire to watch friends on stage. Acting and singing under the sky on a warm summer night, far away from the noise of the street; these are experiences that overwhelm even the “normal visitor” who is not a big fan of opera or Passion plays.

Until now, however, only the stage itself profits from the quality of this unique location in Austria. The path leading visitors from the parking lot to their seats and then back to the parking lot after the performance is just too direct. 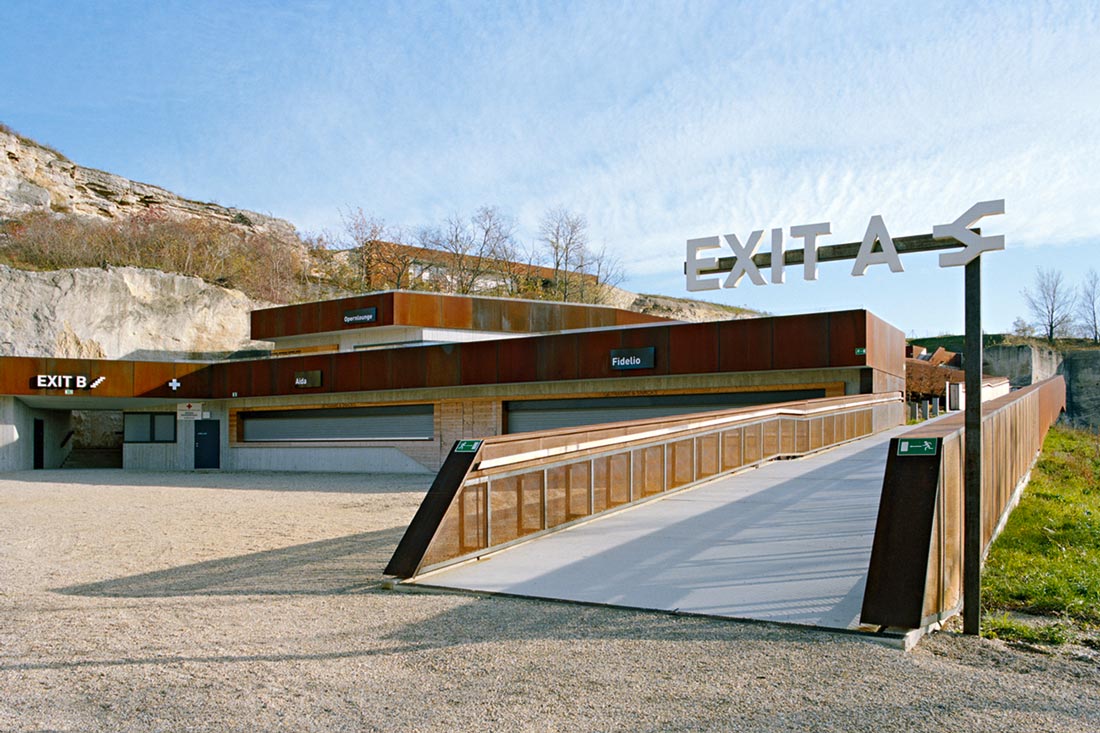 It is hard to imagine that this impressive scenery – characterised by precise cutting edges, minutely worked surfaces and careful subtraction of the ground is only a by-product of the mining that took place a long time ago. It almost seems like the two Japanese artists from the Sculpture Symposium, who created the “Japanese Channel” by carving the compact rock in a nearly impossibly precise way, might have transformed the meadow in Burgenland, called the “Austrian Grand Canyon” in the same way. That is why it seems only logical to take the “Japanese Channel” and its principals as a method and model for a redesign, which can be interpreted as a continuation of this sculptural artwork. 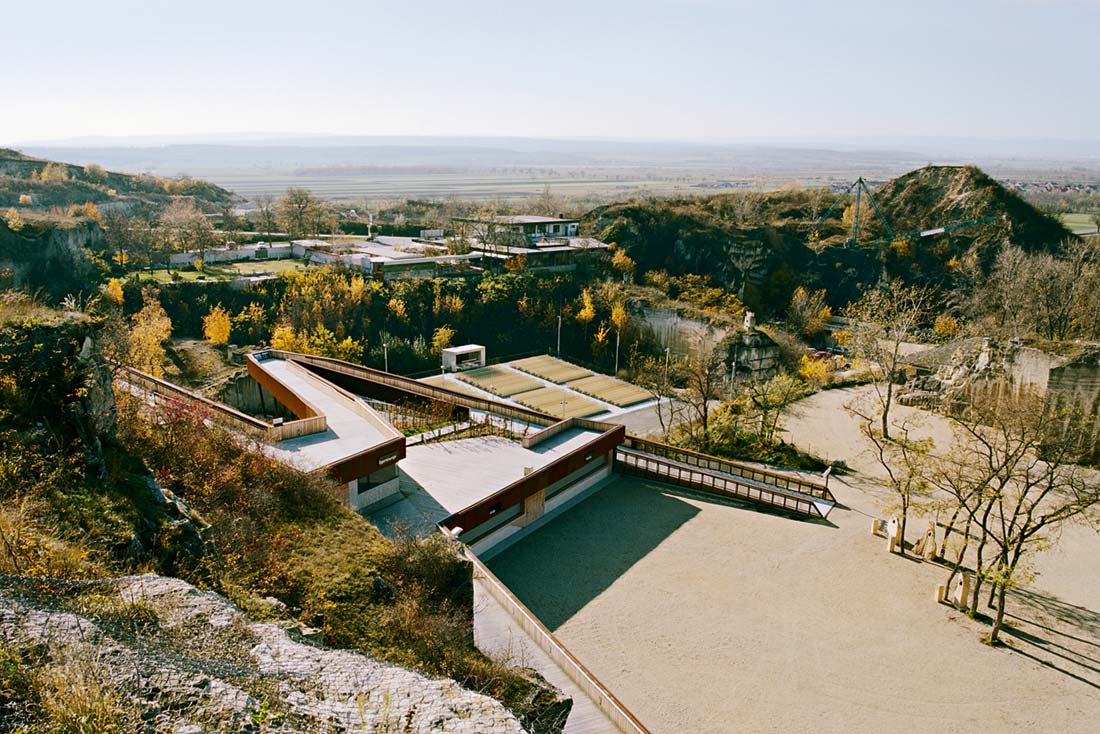 The foundation of our concept is the idea of letting all the parts of the theatre and visitors’ circulations take part in the picturesque rock scenery. It is imperative to visualize the surroundings and help visitors better experience them. 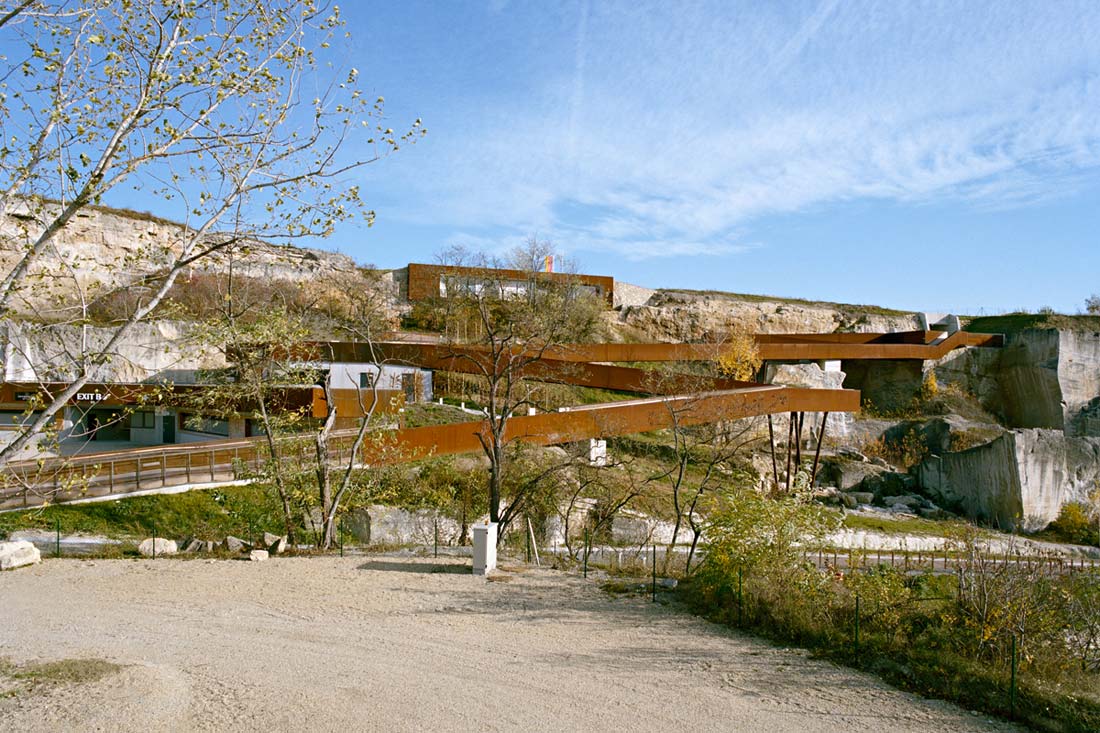 At the parking lot, visitors are welcomed to the world of the Roman quarry with an information panel. Through a cut in the rock, visitors descend into the stone. After passing the underground entrance to the building, at the edge of a cliff visitors can finally orient themselves. Past the ticket control, a handicapped accessible ramp with a length of about 400 m leads visitors above canyons and along the rock faces down to the 19 m deep level where the festival site is located. Visitors enter the foyer square to the east through a massive rock formation which is bordered by an artificial angle in the site formed in the west. At this point they are welcomed by the ushers. The foyer square is intended for relaxing and strolling around before the start of the show. Behind the central rock formation lies the existing performance area, including the natural stage. In between, along the western rock face, the toilets are strategically arranged from north to south on the level of the grandstands, as well as on the level of the foyer square.

Visitors have two possibilities to reach their seats from the foyer square according to their seat numbers. Visitors who are seated on the left (north) climb a large staircase to the “pass” in order to get their first view of the stage. Visitors who are seated on the right (south) descend through a tunnel in the rock formation in order to reach the visitors’ area from the foyer. Both ways hold a surprise – and a moment of tension – as the rock takes over the role of the curtain and veils the stage for the time being. Furthermore, it offers natural noise protection between the catering area and the stage area. Alternatively to both main accesses, there is an access for people in wheelchairs south of the rock, which runs along the ramp across the park to reach the reserved seats in the front.

The boulevard continues to the backstage area and connects the park located to the south with the tribune. The VIP areas are situated in places with respectively laconic areal quality and spread over the whole premises that can be used. Artists and office staff have their own separate access from the parking lot. It leads over a staircase directly into a forecourt, which marks the end point of the boulevard. The backstage building hides behind the rock of the natural stage. 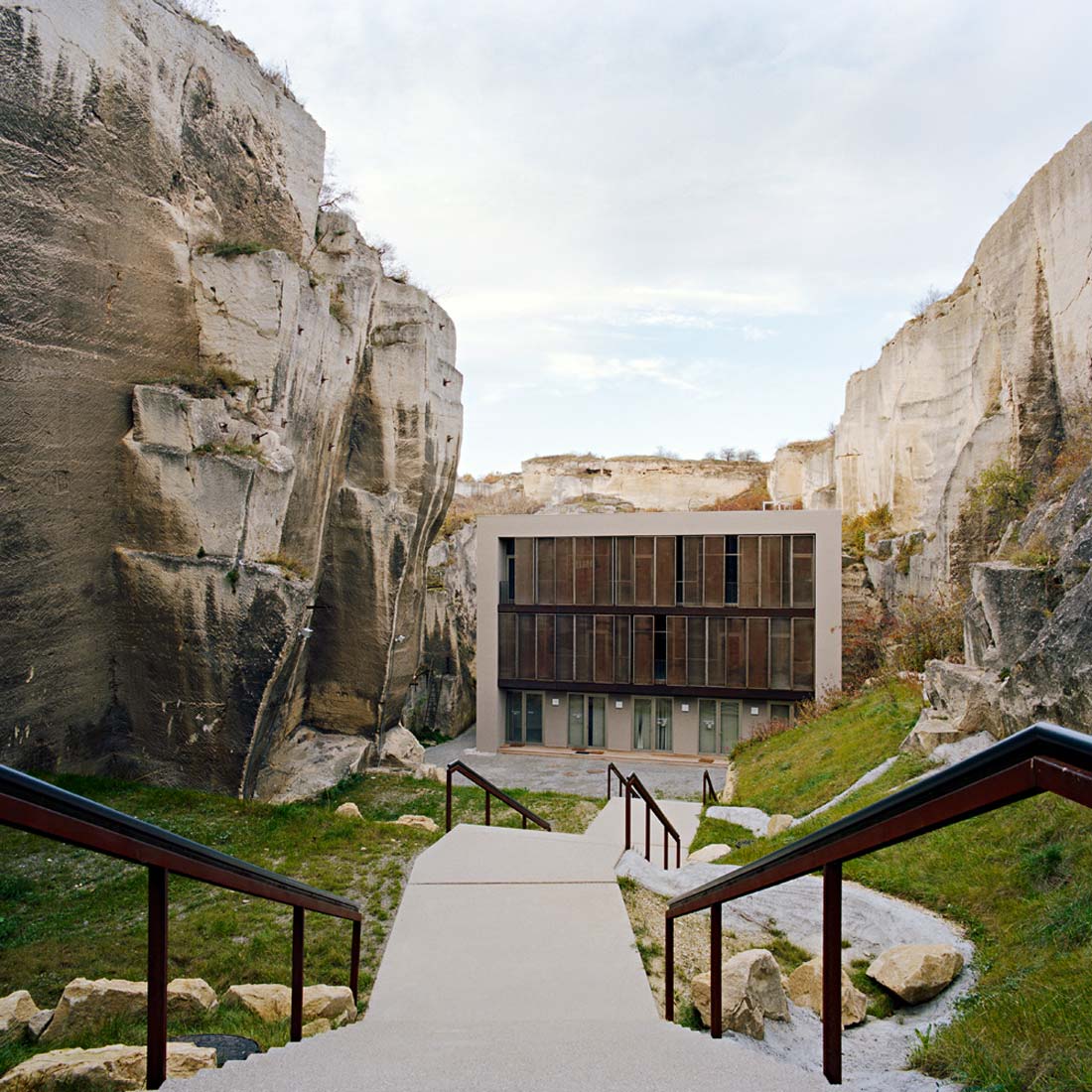 Accuracy: clear and simple language of shapes. Reduction: reflexion to the essential. Subtraction: adding via taking out

As much as possible, the rock itself is used as a building material. Already, visitors’ first contact in the notch of the parking lets the stone become a wall. The VIP areas as well use the surrounding stone as an element that creates a room. Quarry-related materials and materials from the quarry itself are used predominantly for the surfaces of the open spaces. In the foyer, visitors find a carpet made of different sorts of grit, which are converted into a water bound cover. This guarantees necessary infiltration areas and avoids the formation of dust over the dry summer months.

All the added volumes and edges are covered with oxidised steel plates, a material which is used because of the history of the quarry. The associations with heavy construction machinery are intentional. Additionally the steel guarantees protection from weather and vandalism during the winter time due to its controlled oxidised surface.

Wherever visitors are likely to come in contact with these surfaces – at the box office, catering counters, toilet entrances, etc. – white fibre-cement sheeting has been used, which creates a more refined note in contrast to the rough sandstone and the rusted steel. 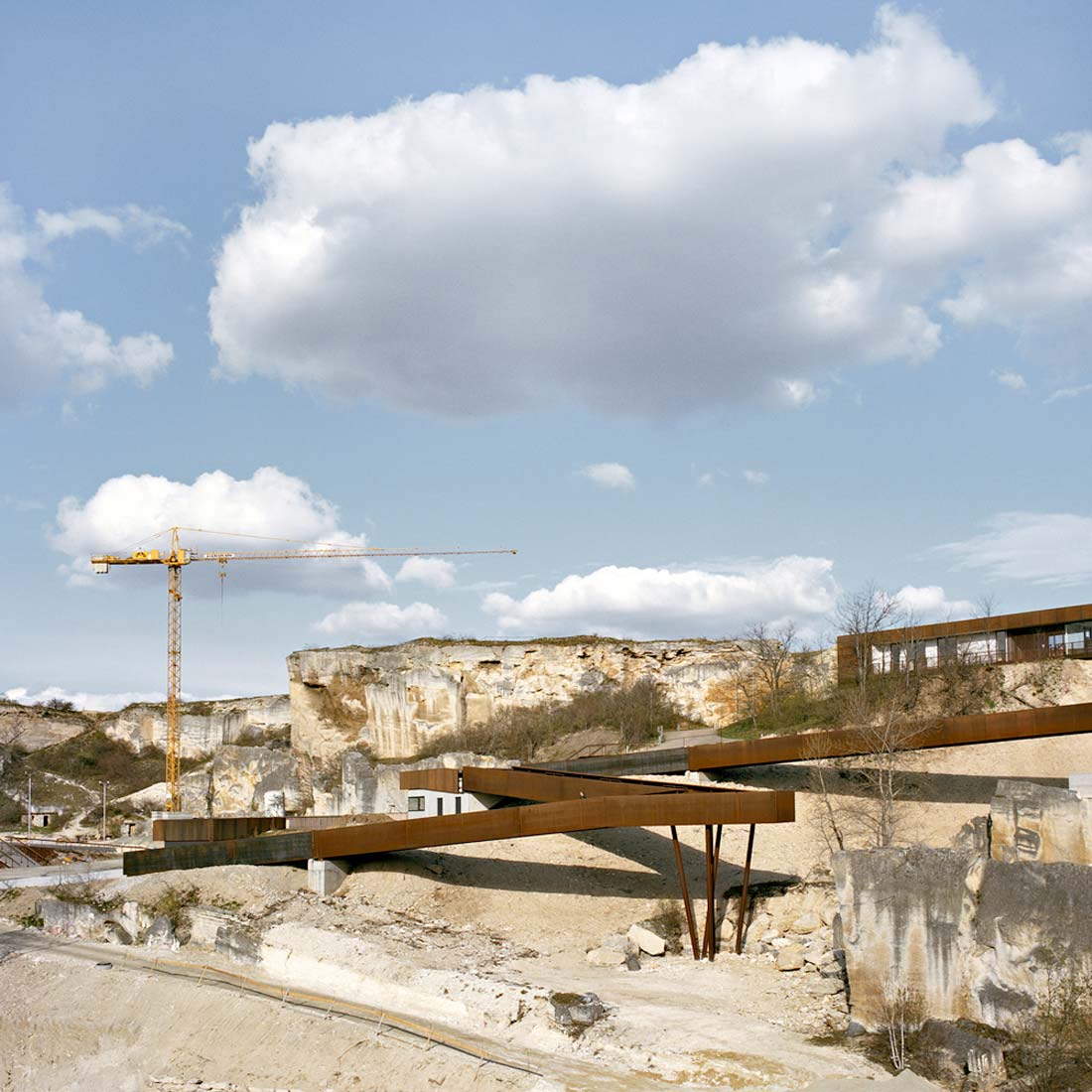 According to the different conditions for the specific parts of the structure, various construction methods are used.

The backstage area, with its complicated access and limited space, uses a timber construction. It is possible to deliver prefab elements, including all the necessary facade plates, to the construction site. Those could then be brought in to the construction site over the cliffs via a crane. The division of the backstage area into two autonomous parts allows for two different construction phases, according to requirements. The ramp, toilets, and VIP02 till VIP04 are completed with a conventional steel structure. The difficulty in accessing several of these areas demands working as much as possible with prefabricated materials. In this case, steel structure is better than timber construction. All the other areas (catering, VIP01 and entrance area) are built conventionally using exposed concrete. 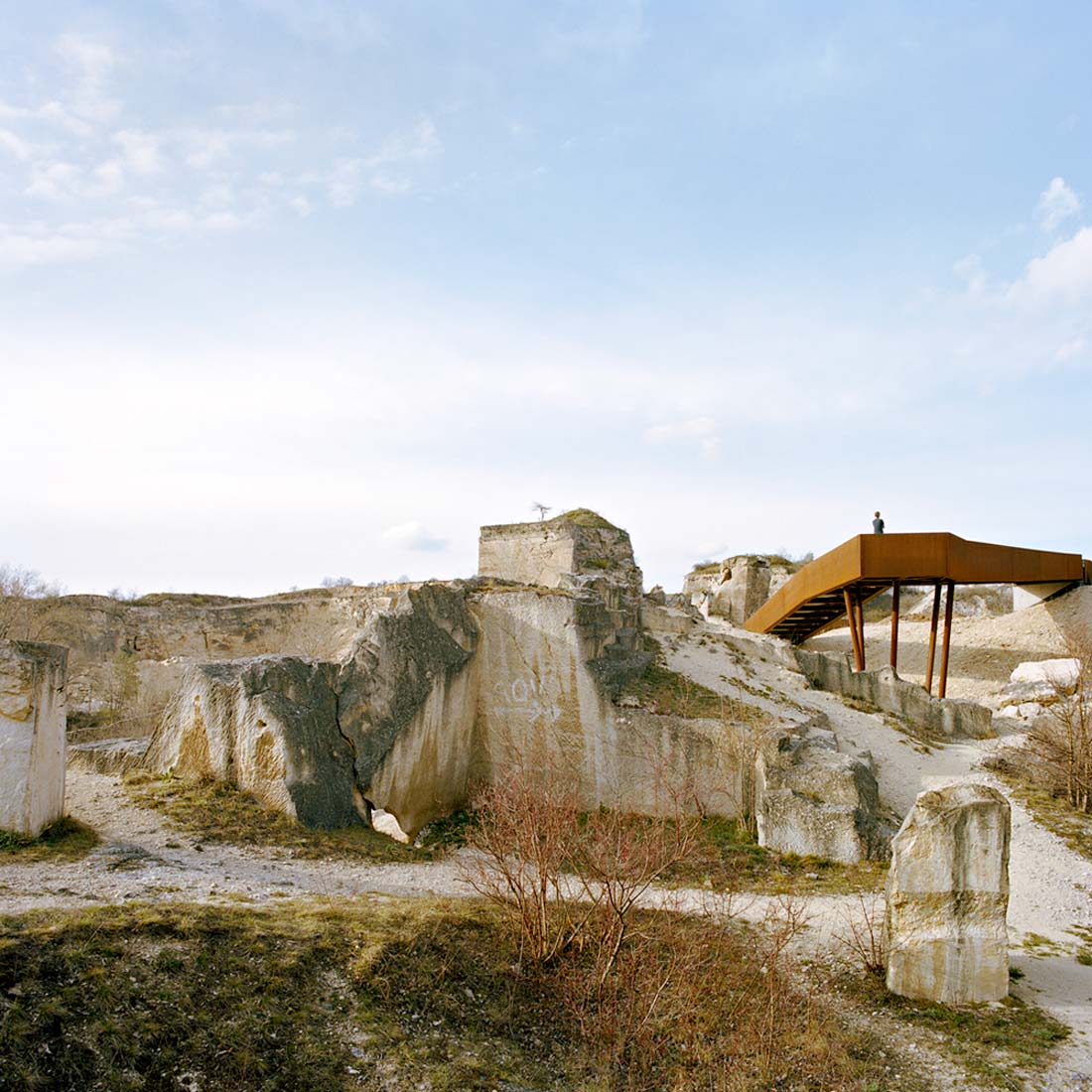 The main illumination for the whole area is based on the accentuation of the existing rock faces and rock edges. The goal is to keep the sky clear of disturbing spotlights or lanterns and to offer an unobstructed view of the night sky full of stars.

The use of “wallwashers”, which are used in urban façade illumination, transforms the quarry into a unique offstage scenery. Additionally, the characteristics of the various areas are boosted due to different illumination concepts. That means that the linear ramp is defined by elements that are integrated into the balustrade. The edge of the premises in the visitors’ catering area is also outfitted with linear lighting. The pond is full of swimming lights, similar to water lilies, which emphasise the romantic atmosphere. The individual picnic areas get lights which are integrated into the benches, spreading soft streaks of light onto the ground. Emergency lights are integrated into the paths and guarantee that people can move around without falling even during the show. 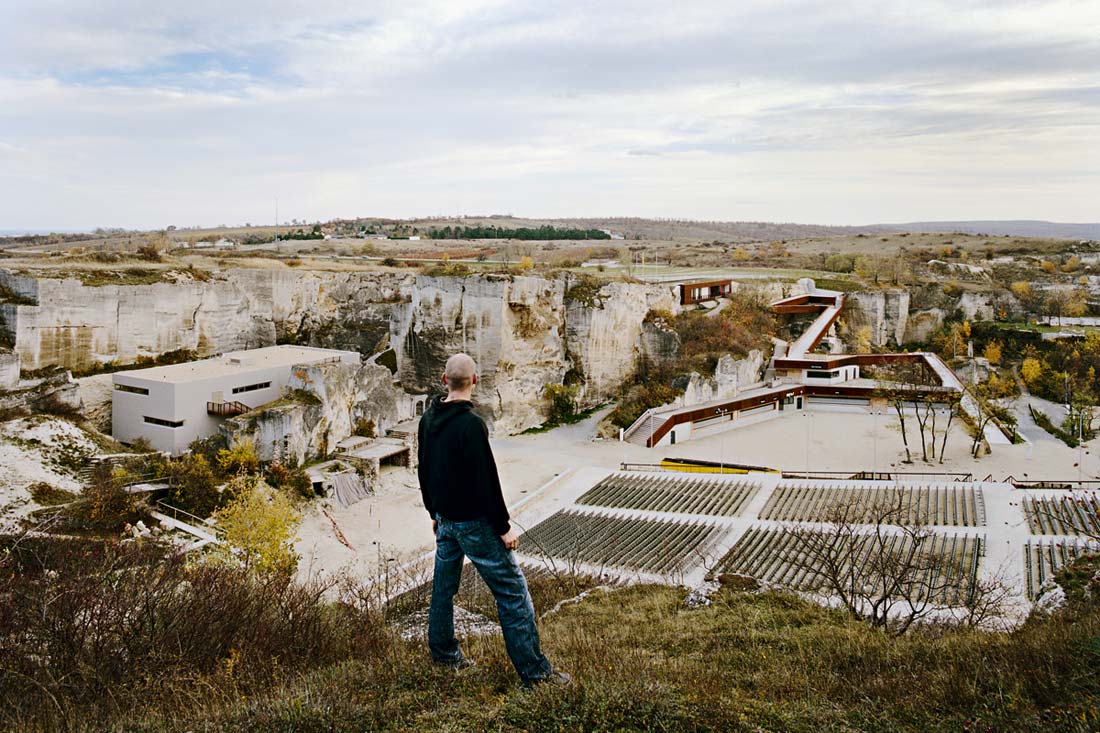 The theatre serves as a model for the organisation of the individual functions. Short paths inside the area are needed to accommodate the estimated number of visitors: up to 6,000 people. The performance acts as a model in order to create a spatial experience as well. It demands moments of surprise and a staging of the paths and lounges.

« Play Landscape be-MINE: a Playground Set on a Coal Mine
Storkeengen: Landscape and Climate Adaption »