Cargo drone routes have utility wherever there is a lack of roads. Just as mobile phones dispensed with landlines, cargo drones can transcend geographical barriers such as mountains, lakes, and unnavigable rivers without the need for large-scale physical infrastructure. Just a third of Africans live within two kilometres of an all-season road, and there are no continental motorways, almost no tunnels, and not enough bridges that can reach people living in far-flung areas of the continent. 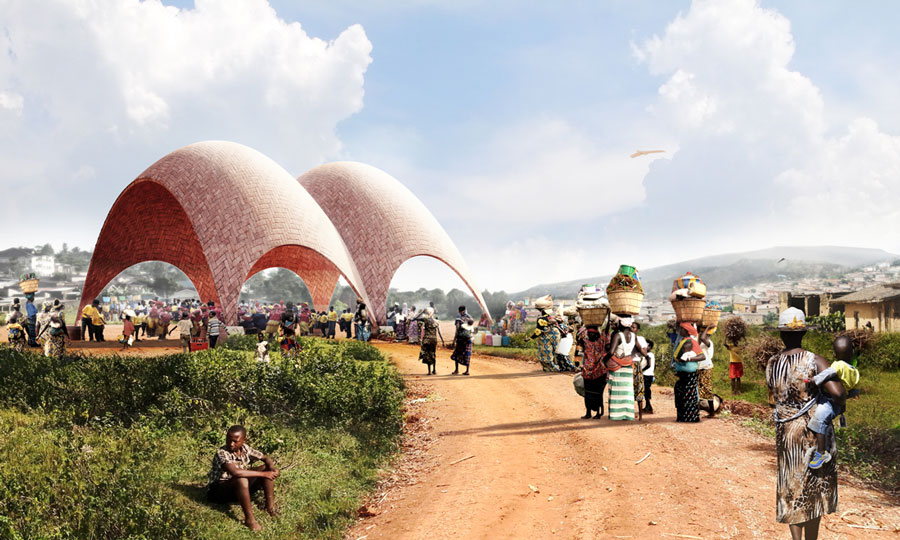 It would require unprecedented levels of investment in roads and railways to catch up with the exponential growth in Africa’s population, which is set to double to 2.2 billion by 2050. An ‘infrastructural leap’ is essential using drone technology and clean energy systems to surmount the challenges of the future.

The specialist drones can carry blood and life-saving supplies over 100 kilometres at minimal cost, providing an affordable alternative that can complement road-based deliveries. Two parallel networks would operate services, the Redline using smaller drones for medical and emergency supplies; and the commercial Blueline that would transport crucial larger payloads such as spare parts, electronics, and e-commerce, complementing and subsidising the Redline network. 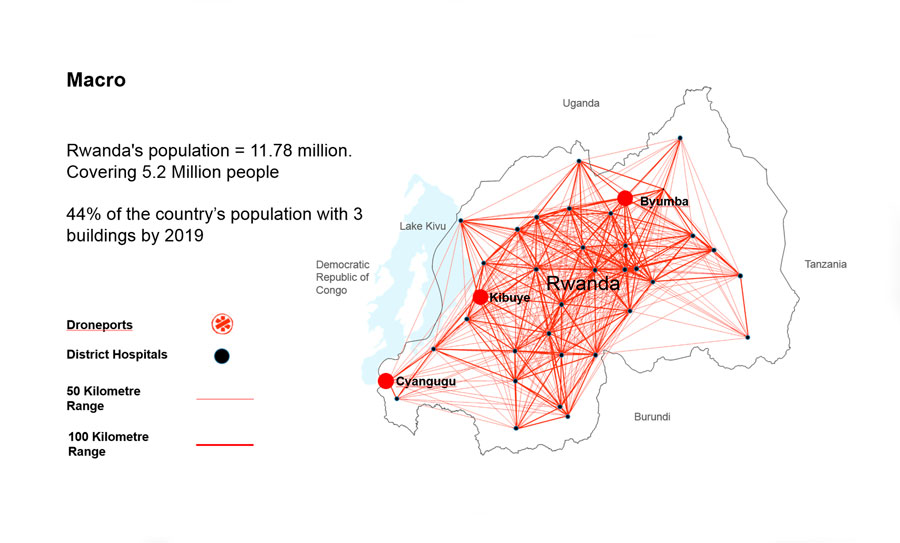 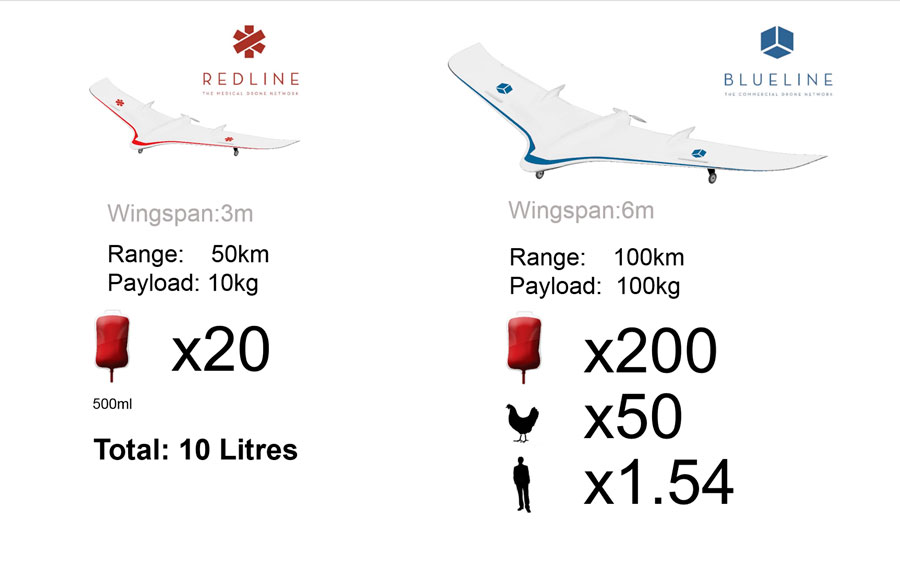 The Droneport offers a new typology for a building which we hope will grow into a ubiquitous presence, much like petrol stations have become dispersed infrastructure for road traffic. The proposal will have a strong civic presence, based on sharing and multiple uses. It allows for safe landing of quiet drones in a densely packed area, and includes a health clinic, a digital fabrication shop, a post and courier room, and an e-commerce trading hub, allowing it to become part of local community life. 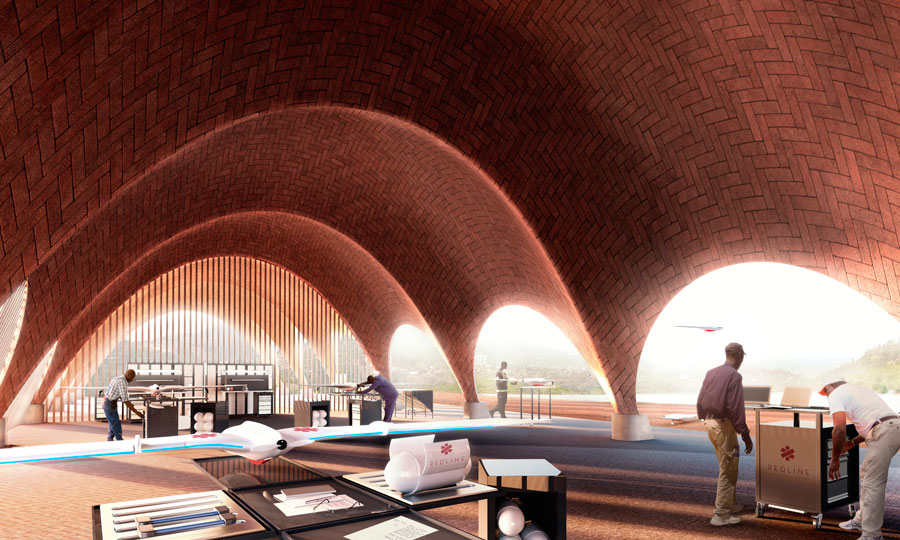 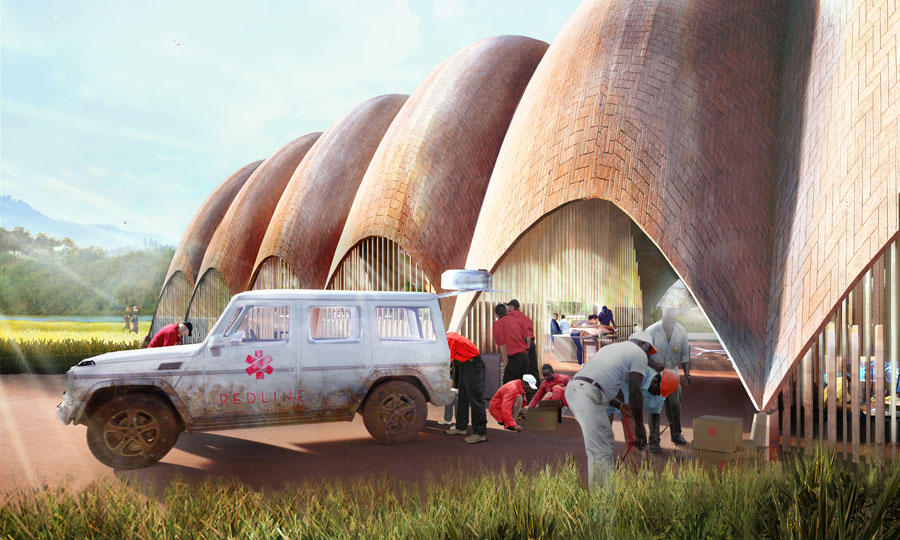 The project is an evolution of Foster + Partners’ previous experience in building airports, as well as earlier lunar building studies conducted in association with the European Space Agency. Just as the structures designed for the moon use a minimal inflatable framework and 3-D printed lunar soil, the Droneport is imagined as a ‘kit-of-parts’ where only the basic formwork and brick-press machinery is delivered to site, and the raw materials, such as clay for bricks and boulders for the foundation, are locally sourced, reducing material transport costs and making it more sustainable. The central idea is to ‘do more with less’ and the vaulted brick structure with a minimal ground footprint, can easily be put together by the local communities. Multiple vaults can also link together to form flexible spaces based on demand and needs of the particular place, and the evolution of drone technology. The Droneports will also be manufacturing centres for drones, generating employment opportunities for the local population. By giving the local people the construction knowledge, the project seeks to leave a legacy that will initiate a change that is bigger than the building itself. 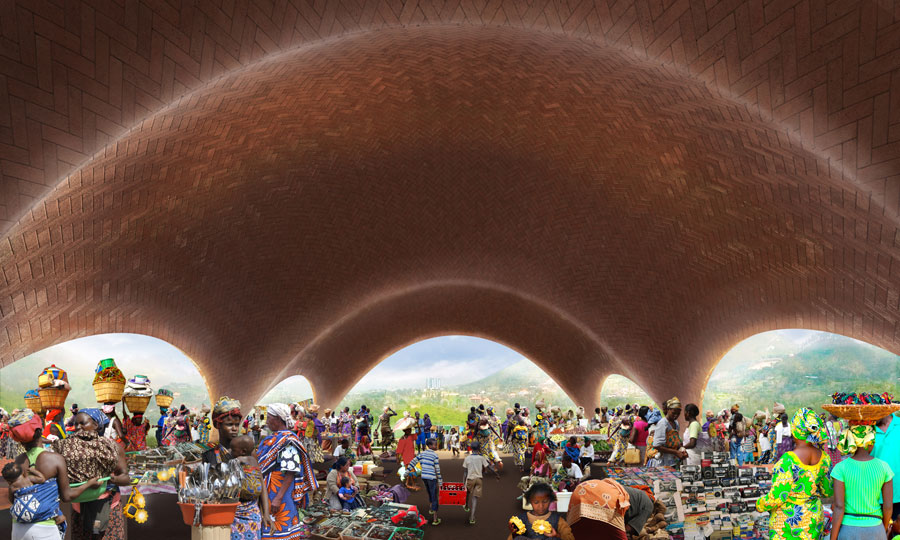 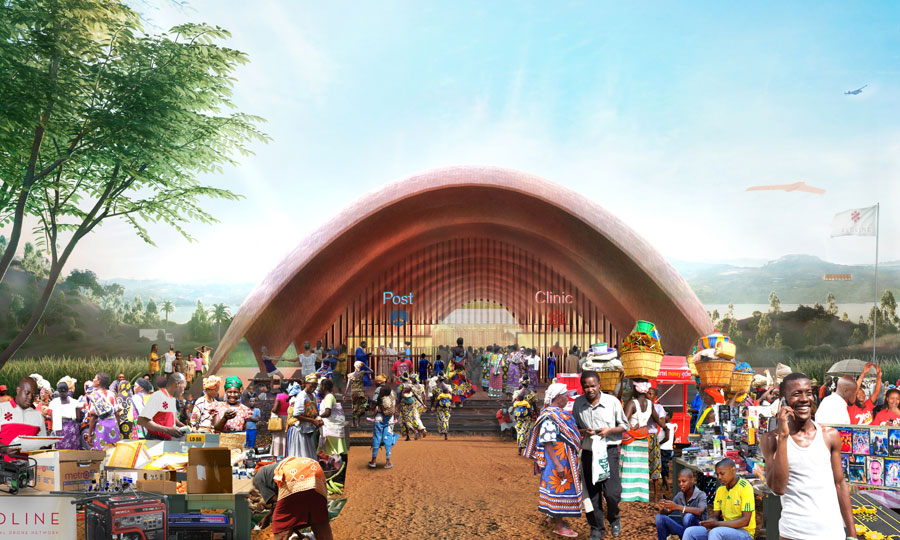 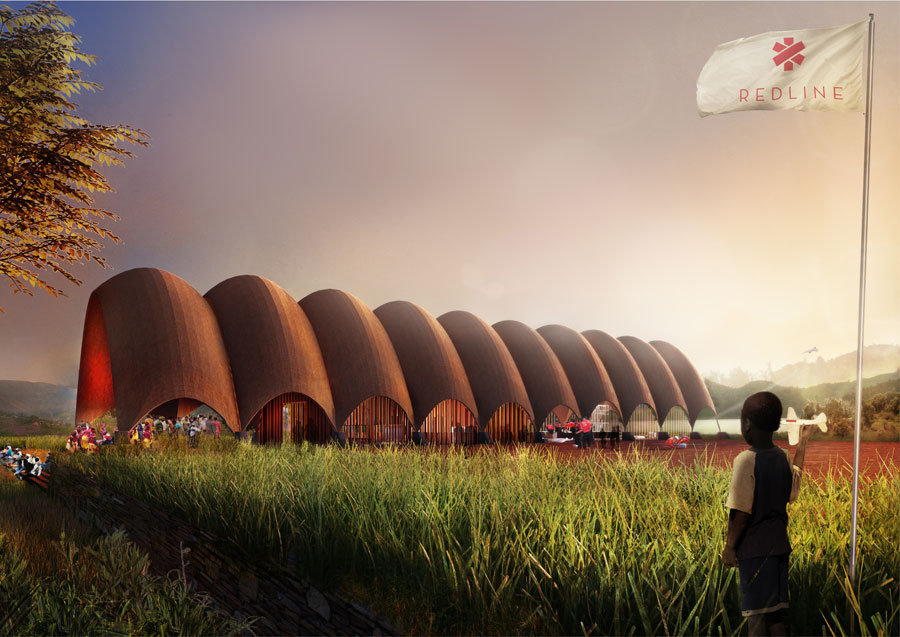 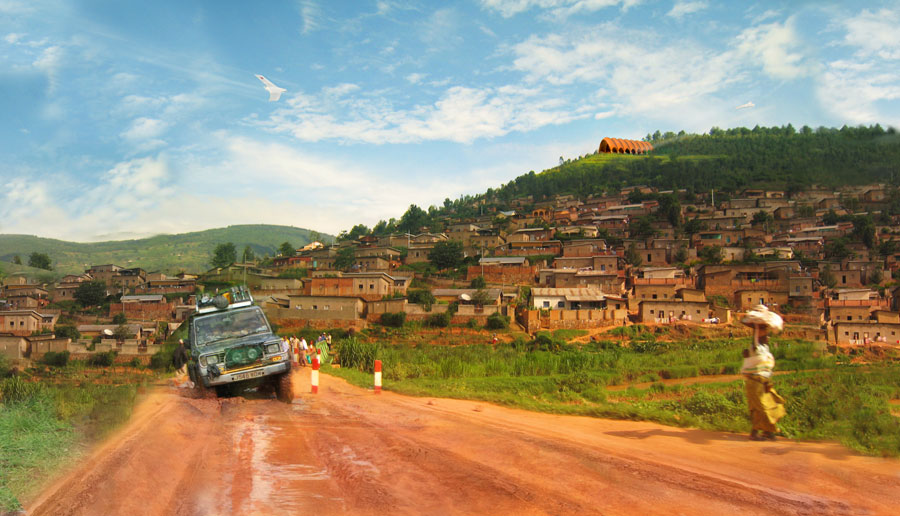 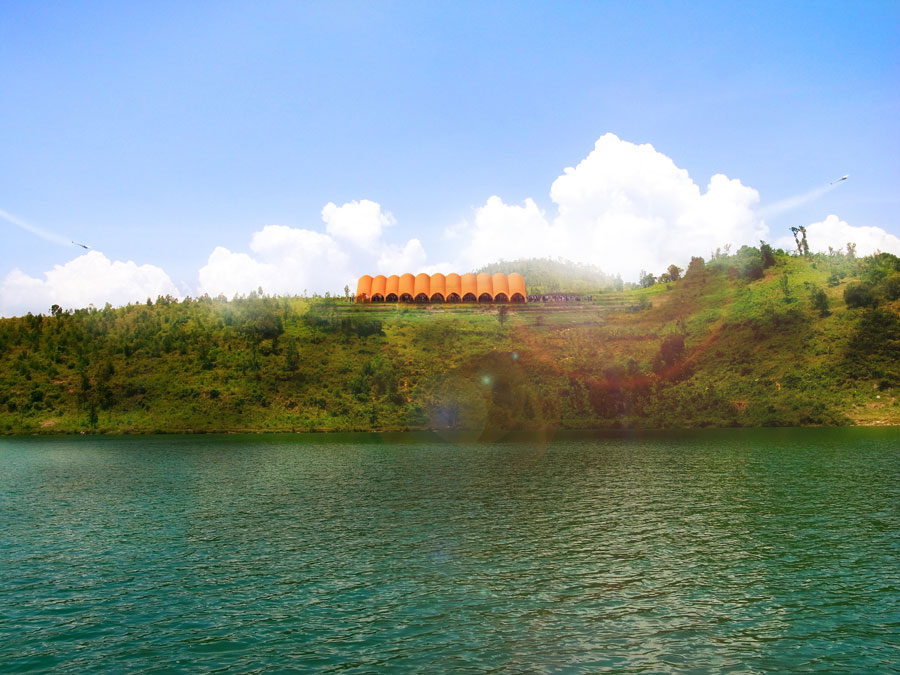 The pilot project – slated to begin in 2016 – is based in Rwanda, a country whose physical and social geography poses multiple challenges for prototyping the future of the projected Redline trans-continental network. This initial plan for three buildings, to be completed by 2020, will enable the network to send supplies to 44 per cent of Rwanda. Subsequent phases of the project could see in excess of 40 Droneports across Rwanda, and the country’s central location could allow easier expansion to neighbouring countries such as Congo, saving many thousands more lives. 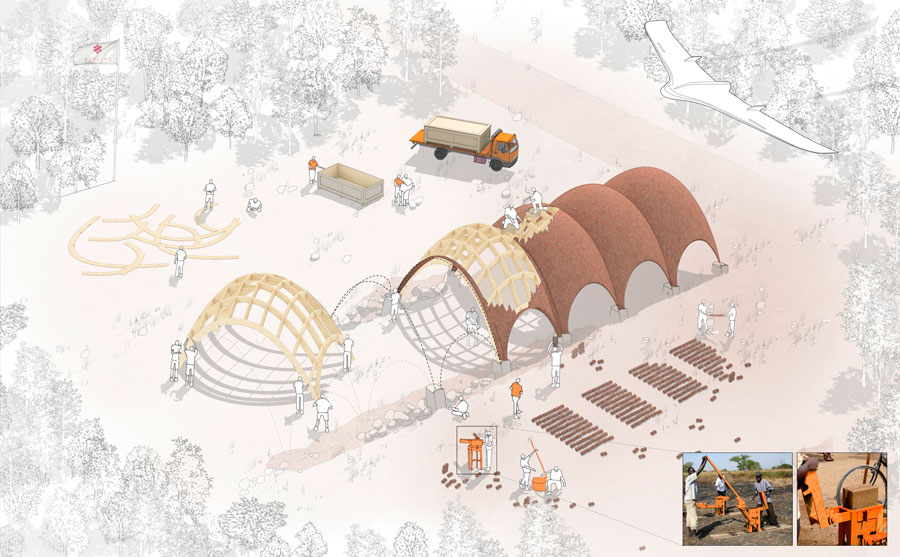 “It is inevitable on a crowded planet, with limited resources, that we will make more intensive use of our sky using flying robots to move goods faster, cheaper, and more accurately than ever before. But it is not inevitable that these craft or their landing sites will be engineered to be tough and cheap enough to serve poorer communities who can make most use of them. Droneport is an attempt to make that happen, and to improve health and economic outcomes in Africa – and beyond. We are proud to have Norman Foster – an architect with extensive personal experience of flying – as our partner on this project.”