Sitting under a tree on a pile of discarded furniture, surrounded by fifteen-story buildings, the sad-eyed farmer and his wife tell a gloomy story, that of disappearing agriculture at the periphery of Cairo. The man is in his mid-sixties, dressed in a garbiya, the traditional long shirt of the rural areas. His wife, in black, feeds baladi bread from a plastic bag to a frightened buffalo tied to the tree. Surrounded on three sides by blind brick facades, their field is about 100 meters long and 15 meters wide, planted with clover. The farmer explains that he has been working this land for over 50 years, but his sons don’t want to farm. He does not own the land, and he knows it is only a matter of time until the soaring real estate values in the area will convince the landowner to sell and force him out. He has no hope. His field stands in the shade of the neighboring buildings and is sprinkled with trash from the streets. He used to grow vegetables for human consumption here – wheat, eggplants, and tomatoes. But as the city grew, quality declined, and neighborhoods kids stole the harvest anyway. Cultivating animal feed like clover is the only viable option now. The main reason he is still able to farm this urban plot is that there is a well on the property and he can irrigate easily. Across the street, there is an unfinished, 14-story-high concrete-and-brick construction. The owner told us that the plot used to be farmed, but the tenants were evicted when he bought the land. This is how it goes. Considered informal because they are built on former agrarian land, these housing settlements are informally constructed, without planning or building permits. The pace of illegal construction on fertile areas at the Egyptian capital’s fringes and in the Nile Delta may have quickened since the 2011 revolution, but the phenomenon is not new. Some 65 percent of the inhabitants of the biggest city in Africa – the seventh-largest metropolitan area in the world, with a population over 20 million – live in informal housing.[2] In the massive agglomeration that comprises downtown Cairo, Giza, Shubra El-Kheima, and eight “New Towns,” urban sprawl has taken a dramatic turn as it expands into already scarce agrarian land. 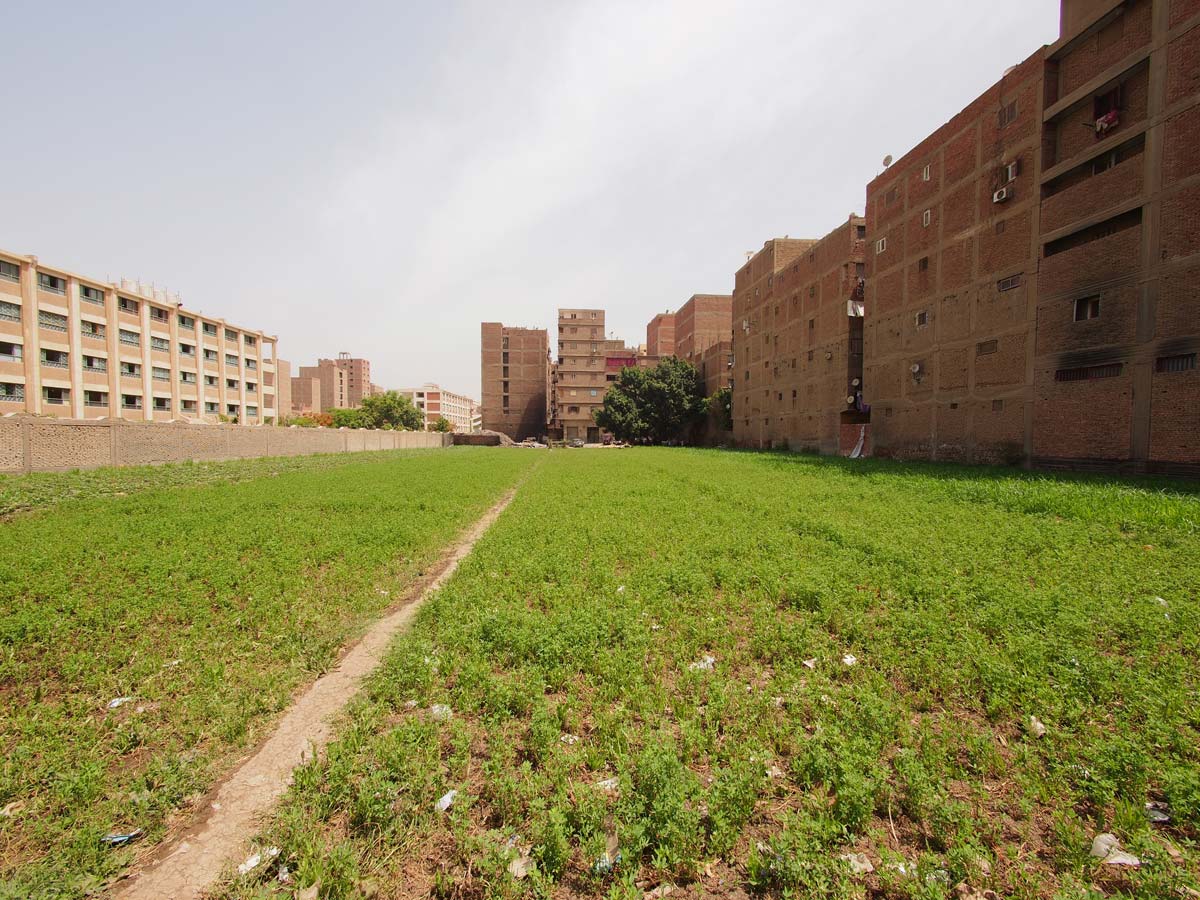 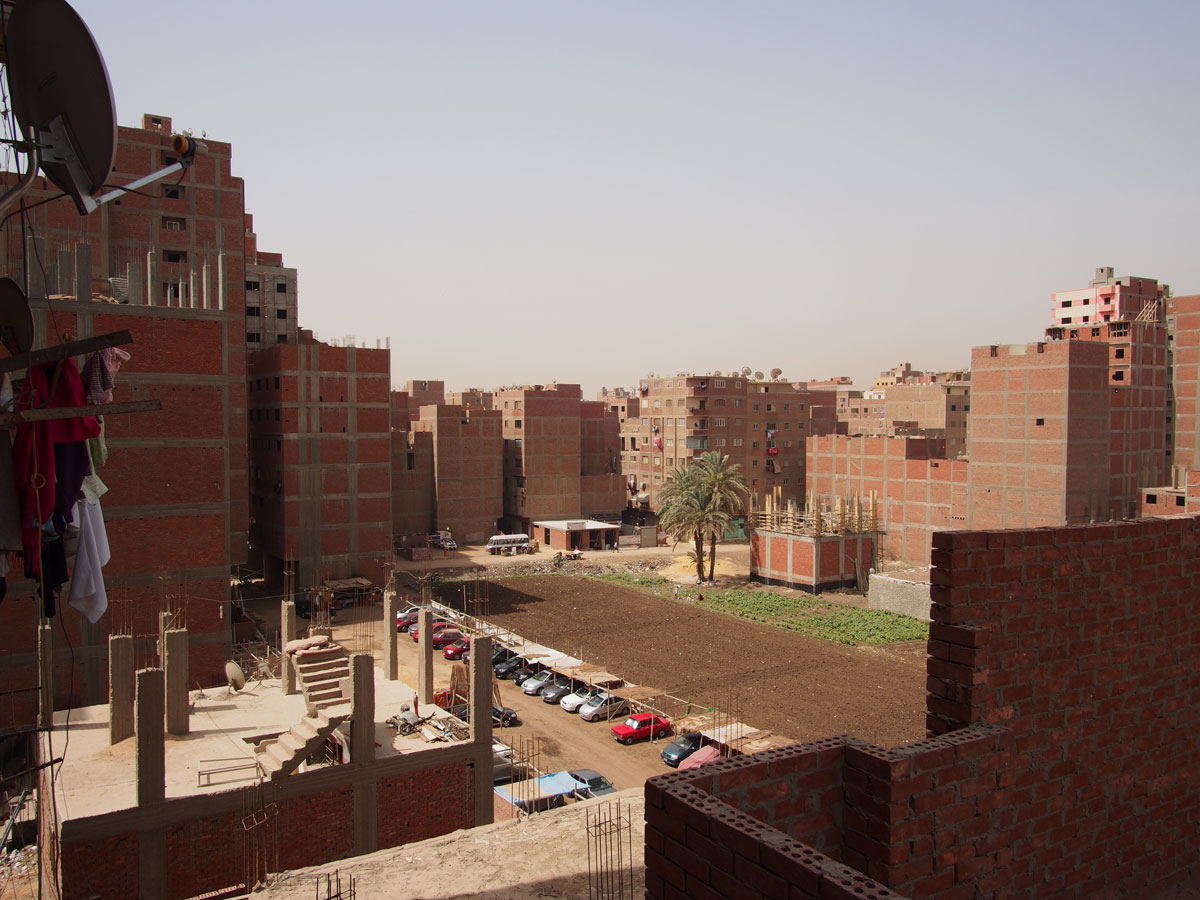 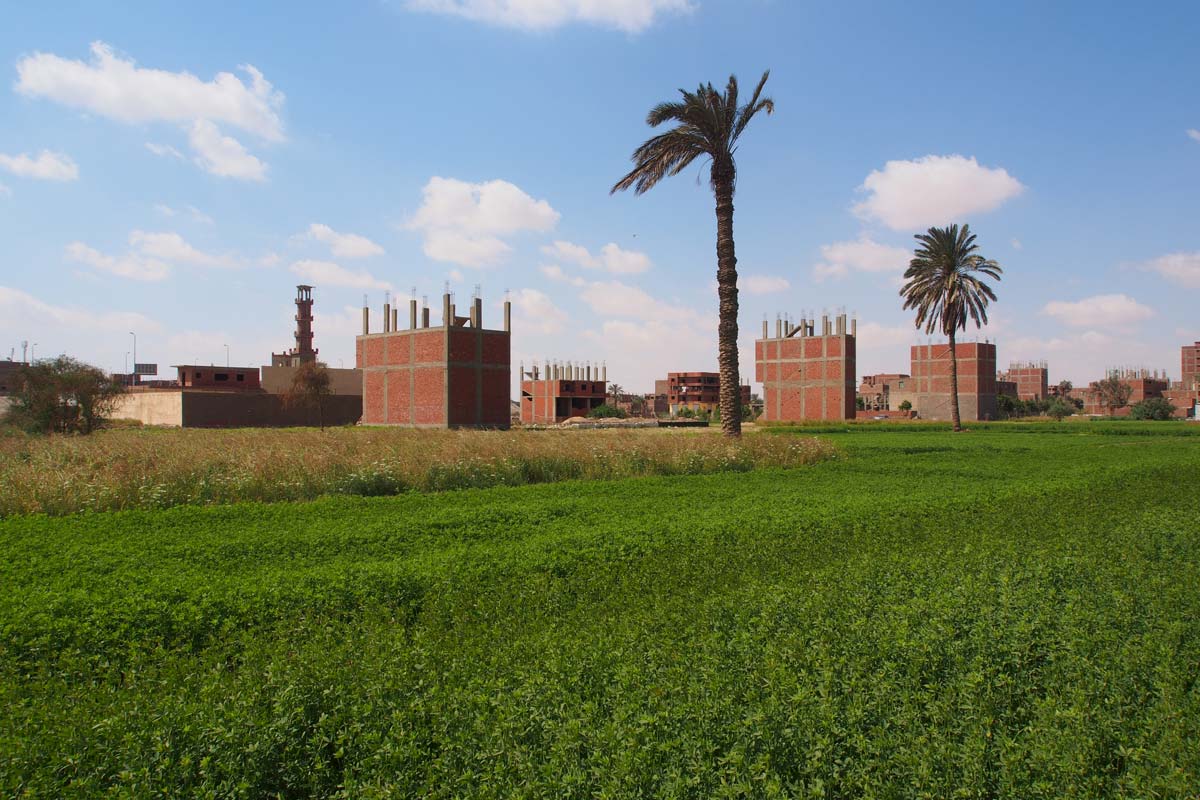 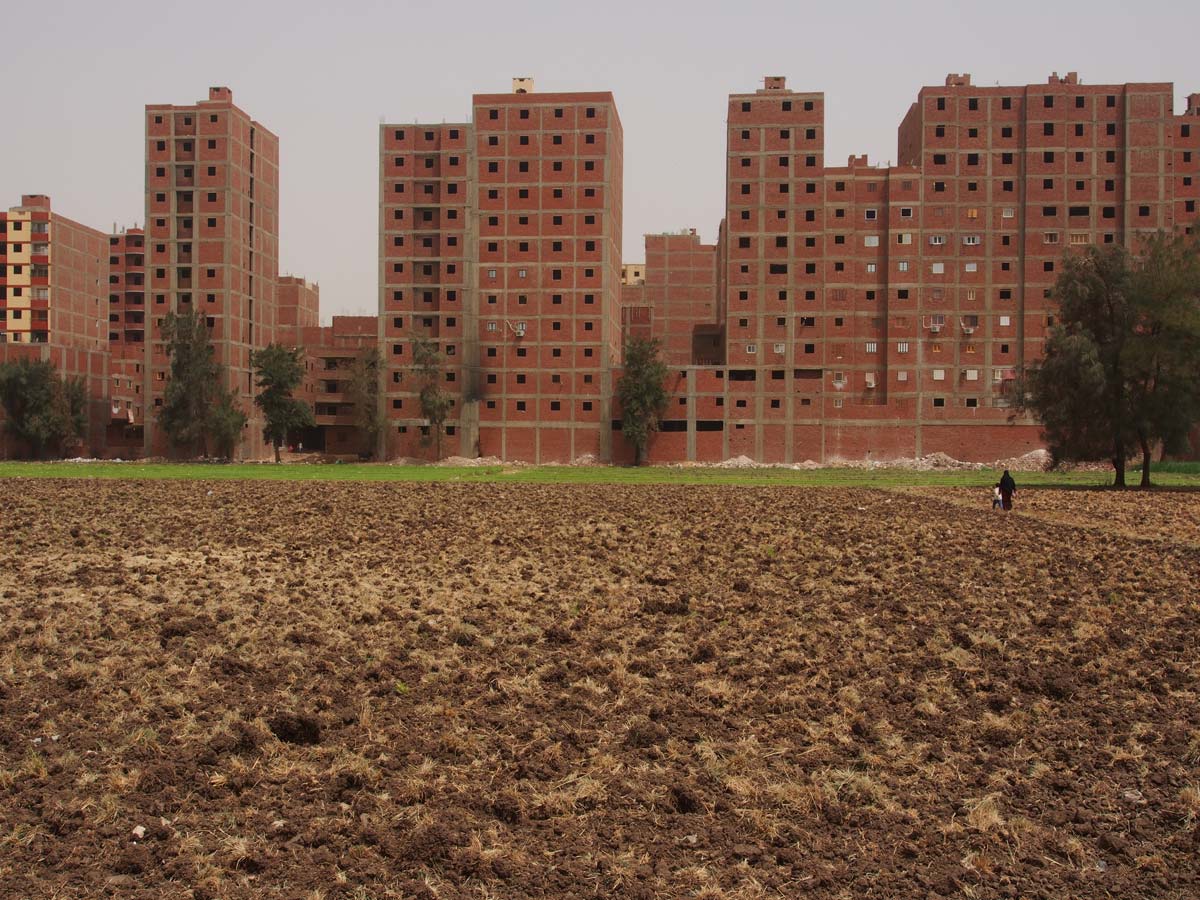 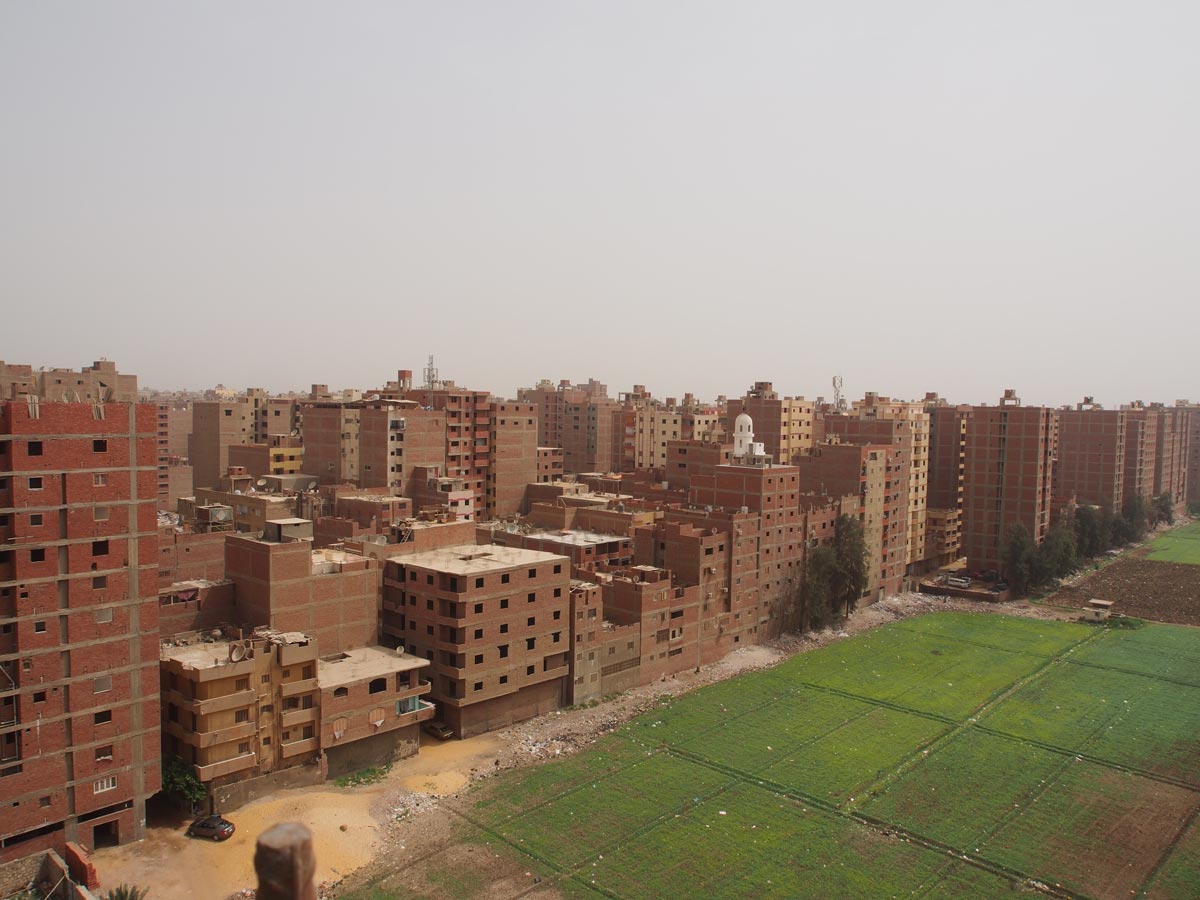 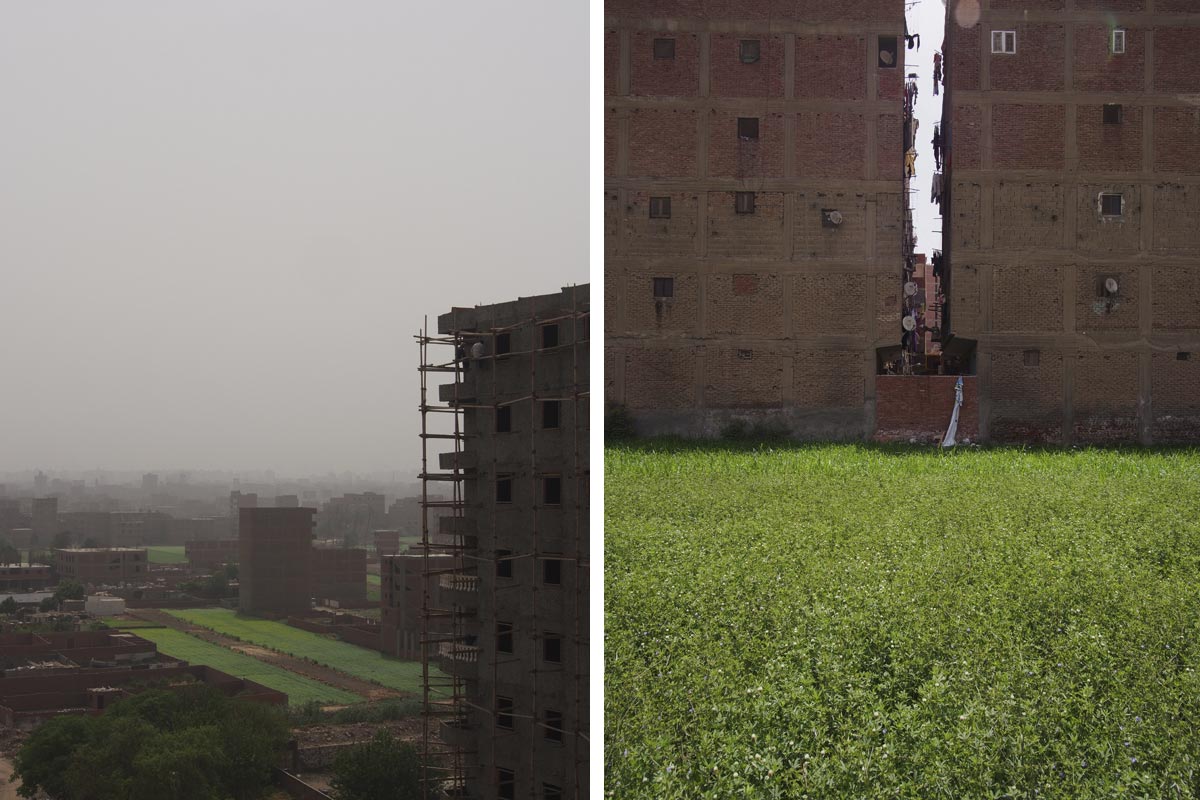