The path of the train and metro tracks through the Sants neighborhood (Barcelona) has been an open wound in the urban fabric for the past century. With an average width of 30 m. and a platform for 8 tracks, it has divided the neighborhood into two practically unconnected parts, along 800 meters from Plaça de Sants to carrer Riera Blanca, which has led to urban defects, in terms of noise pollution and a deterioration of the surrounding areas. 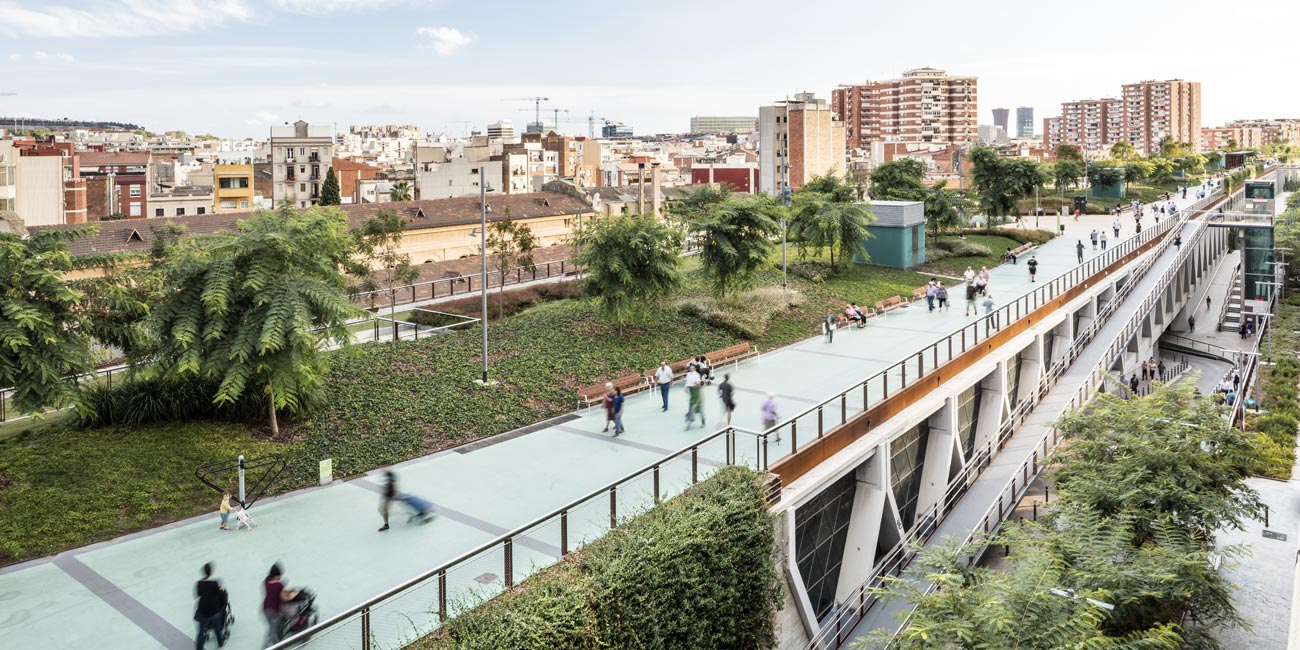 In 2002, the city government decided to launch an urban renewal project for the Sants railway land, which marked the beginning of a complex process that has implicated three public administrations and civic organizations in the Sants neighborhood. 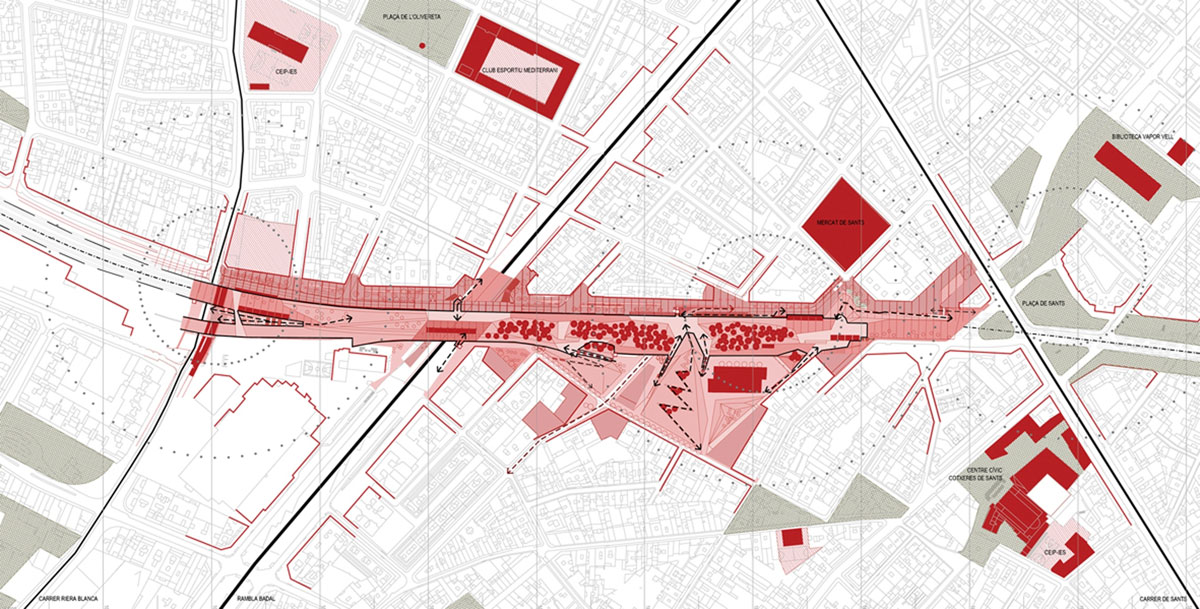 Once the option of burying the train tracks had been ruled out, due to technical and economic difficulties, the proposal that emerged involved building a lightweight box to enclose the tracks, which would be transparent for the most part. The roof would be transformed into a long, 800-meter-long elevated green walkway, which would extend further along into the neighboring municipalities of Hospitalet, Esplugues and Cornellà, creating a 5 km-long “green belt”. The support structure for the construction is a container made of precast concrete sections in a diagonal sequence that imitates the form of a Warren truss, recalling images of old train bridges. The structure creates large triangular open spaces that are closed in with glass, preserving the views of the trains through the city, while reducing noise to a maximum. Maintaining certain areas of the building without glazing opened up the possibility of designing large planted slopes from the lowest-lying surrounding areas, which rise up to the roof level. These slopes “anchor” the building to its surroundings, allowing for the plant life from the roof to spill down onto the side streets, and they support pedestrian ramps that provide a “natural” access to the roof. 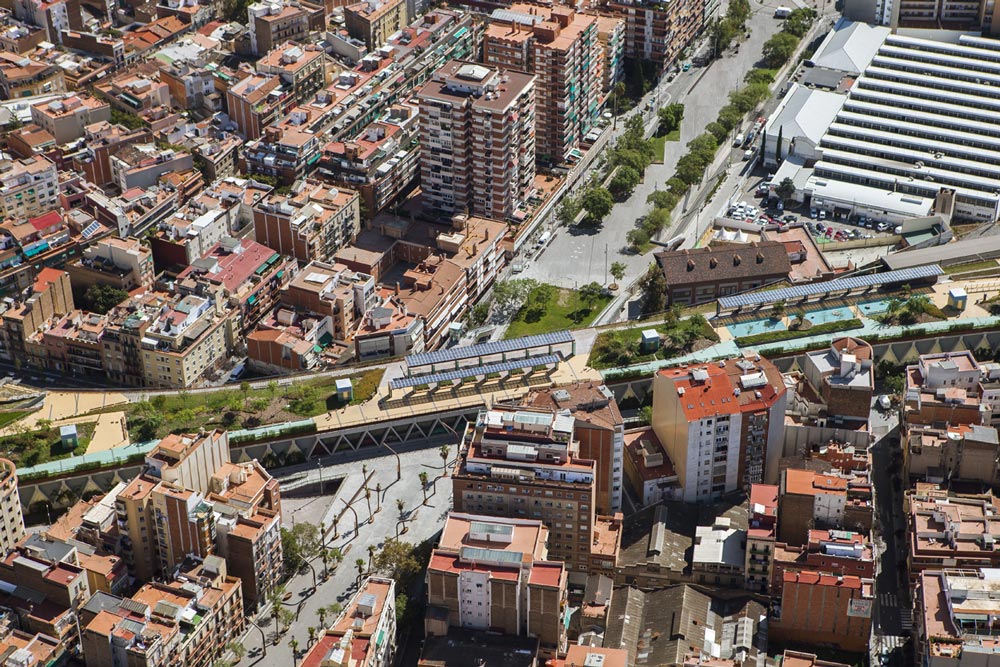 The building’s roof is elevated above the surrounding streets by a distance of 4 to 12 meters. As a result, the gardens become an overlook onto the city. The gardens begin in Plaça de Sants with a large urban space, covered by a shade roof, which acts as the gateway to the gardens. With an average width of 30 meters, they reach all the way to carrer Riera Blanca, a total distance of 800 meters. The gardens are structured according to two linear paths: one on the north side of the roof, which is well shaded by trees; and another on the south side, in permanent sunlight. The space in between the two paths is the backbone of the gardens, centered on the creation of a complex artificial topography with a high-density tree cover and a diverse selection of bushes and ground cover, chosen in keeping with a very selective color palette. The elevated areas created by the topography, reinforced by the density and strategic locations of the tree groupings, encourage the creation of atmospheres where pedestrians lose the feeling of being in the city and feel like they are ensconced in a natural environment. 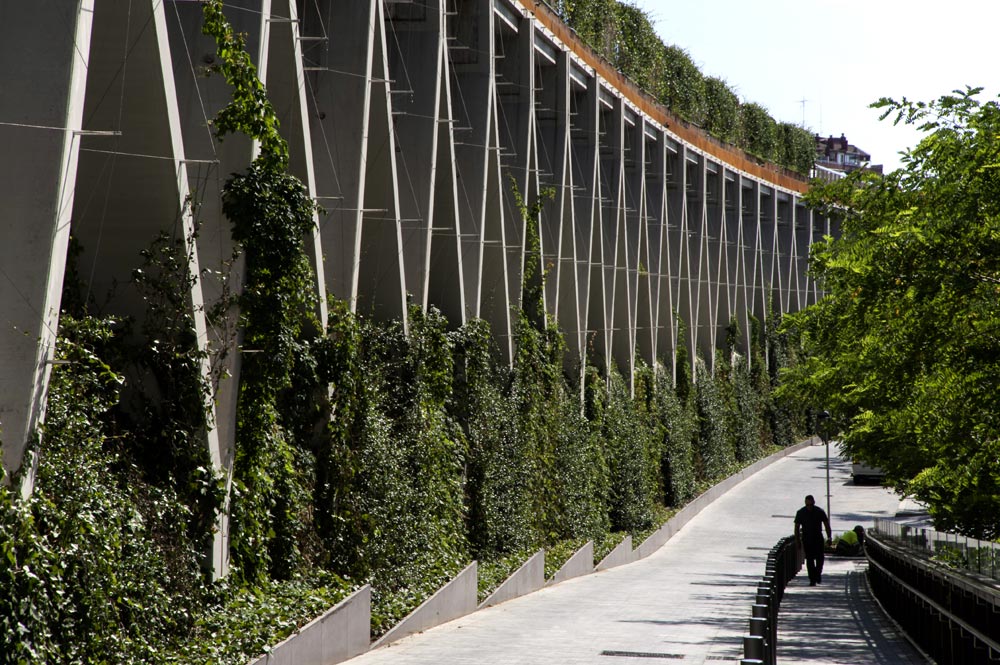 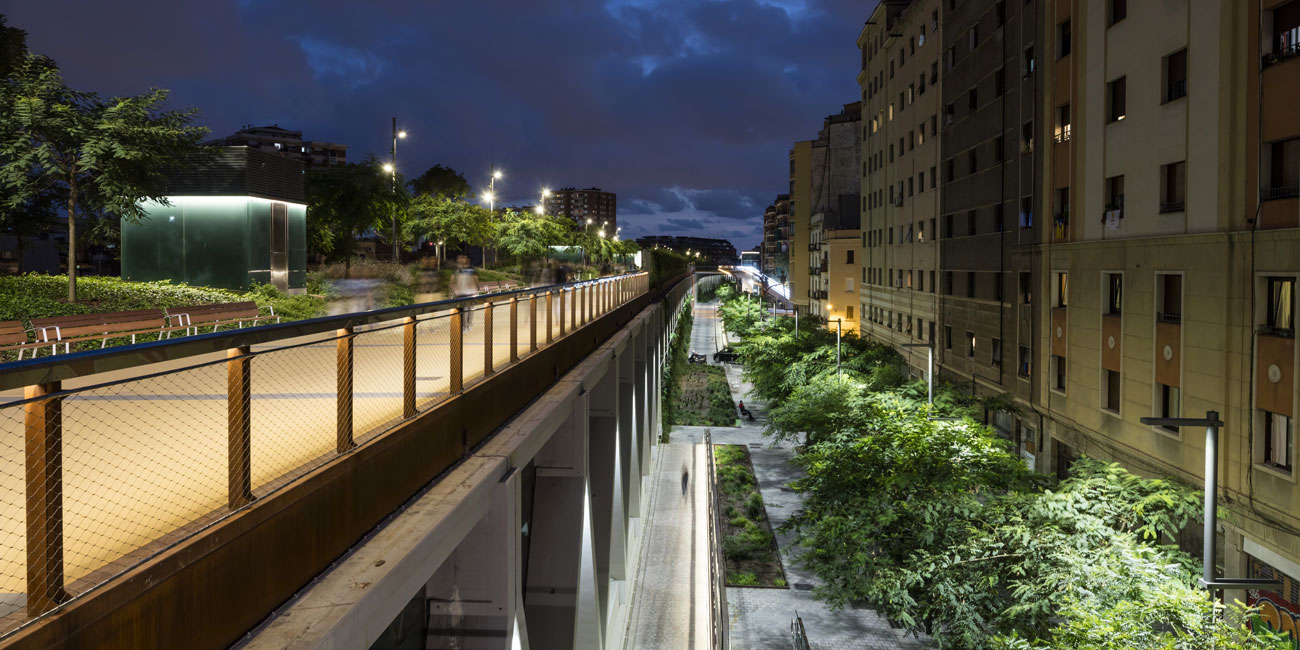 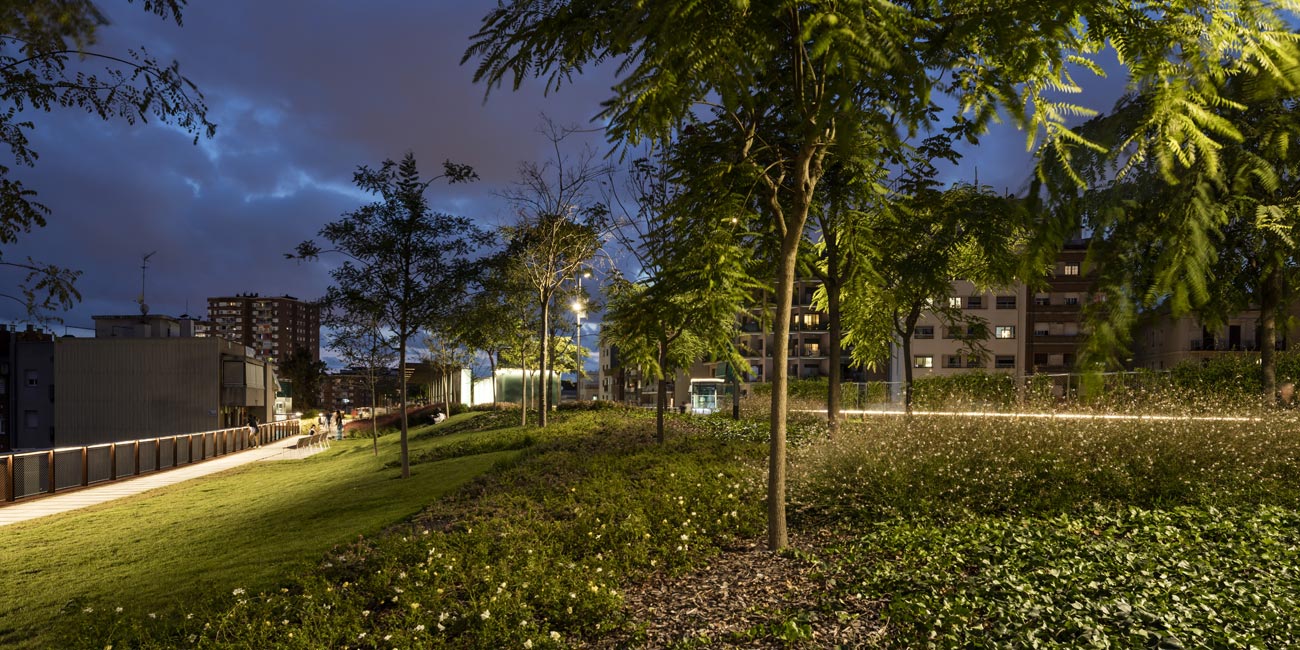 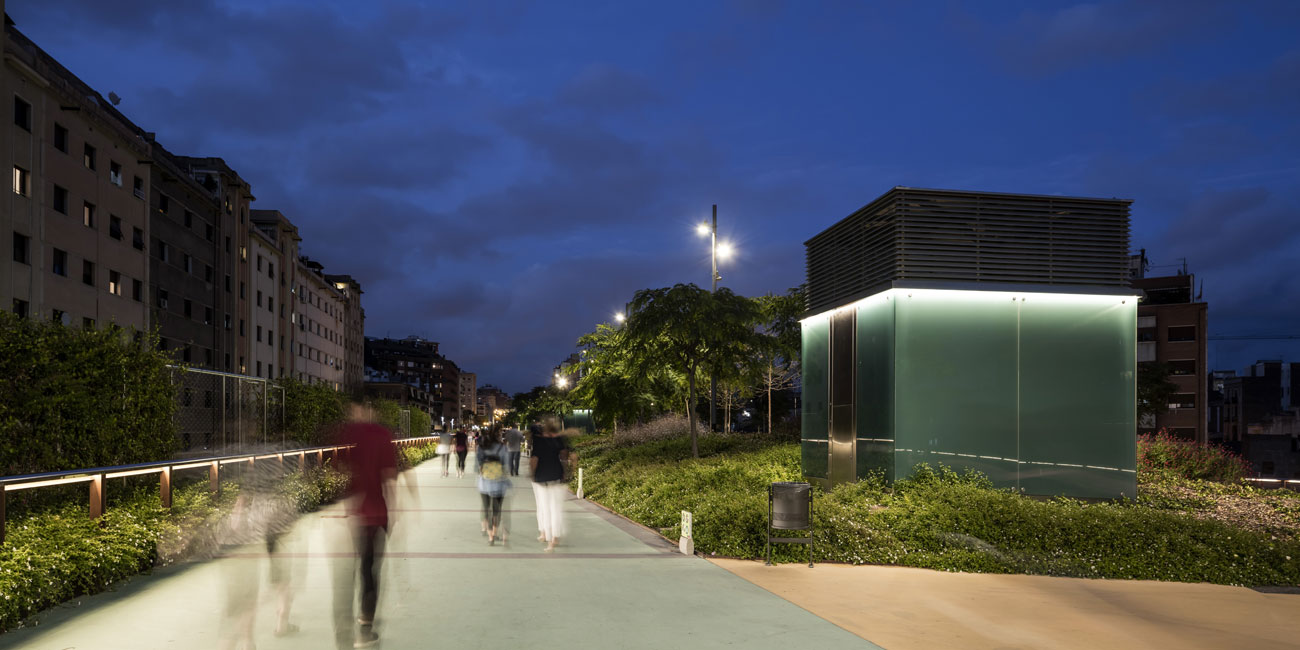 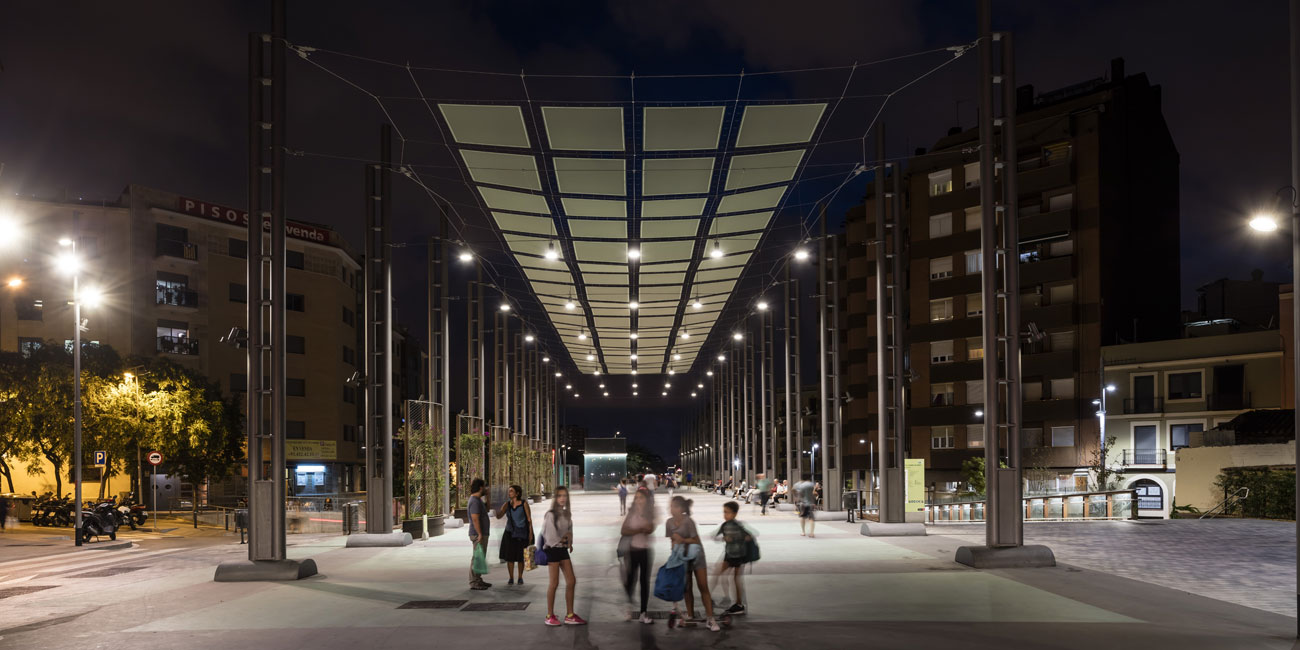 Along this naturalized route, there are three spaces that are treated differently, which serve as junctures in the access system for the roof. They incorporate: 5 elevators and 2 adapted ramps, plus 3 stairways and 4 escalators. These three spaces interrupt the plant life and are characterized by large pergolas where photovoltaic panels are installed, which provide for part of the project’s needs in terms of energy consumption while also generating shade. 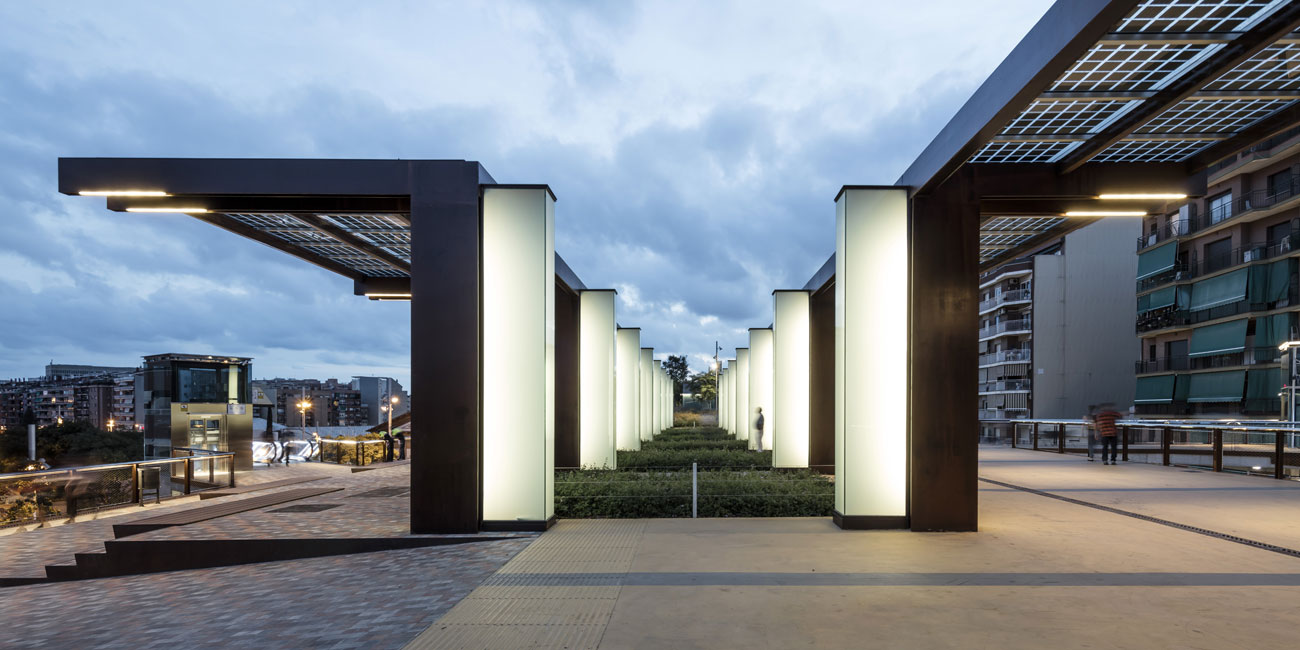 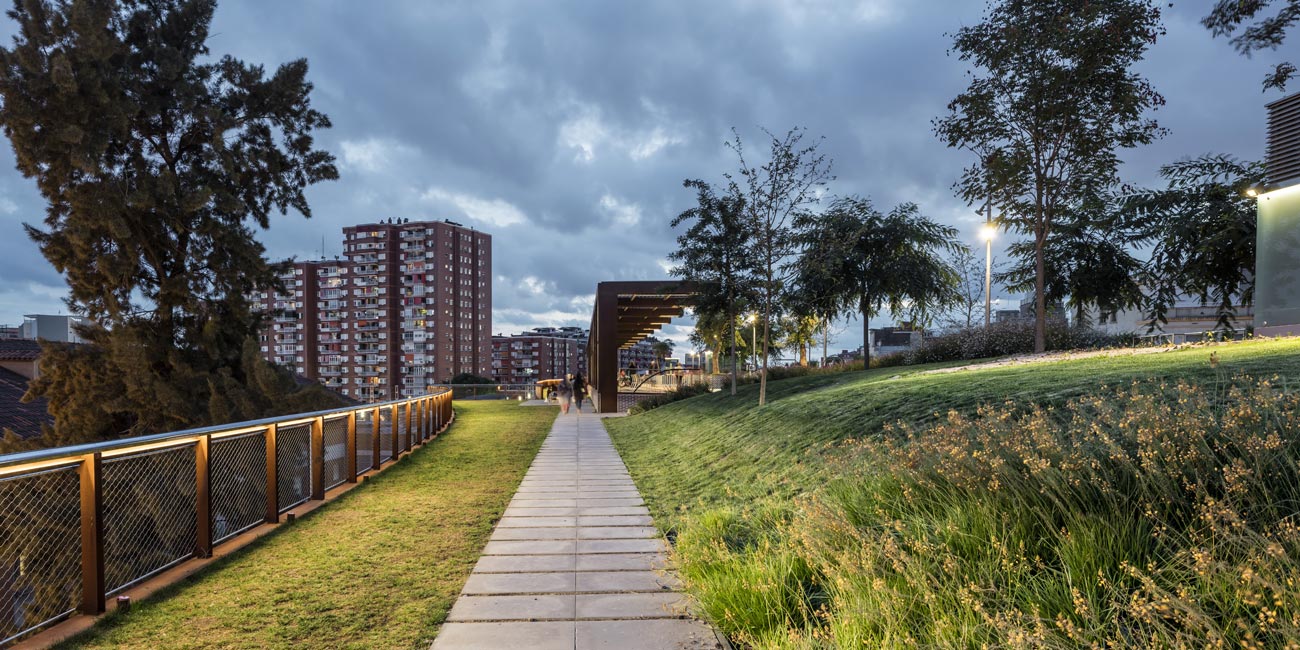 The most common types of trees planted were Tipuanas, Sophoras, Koelreuterias, and Malus evereste, characterized by yellow and white flowers. As for ground cover and bushes, the landscaping includes grass, Bulbine, Salvia splendens, Rosa canina, and Hedera helix on the sunny side with bright and warm colored flowers; and Hedera helix, Vinca, Gaura and Lantana on the shadier side, which run along the northern path, creating a dark green background contrasting against white flowers. 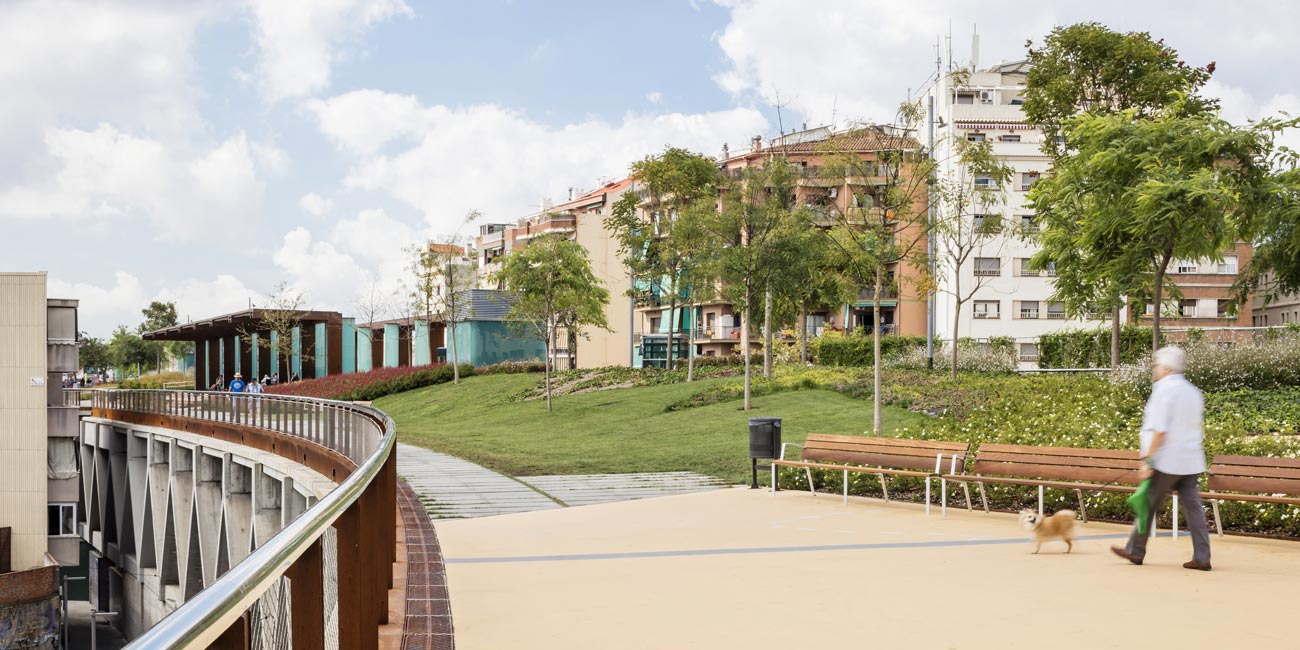 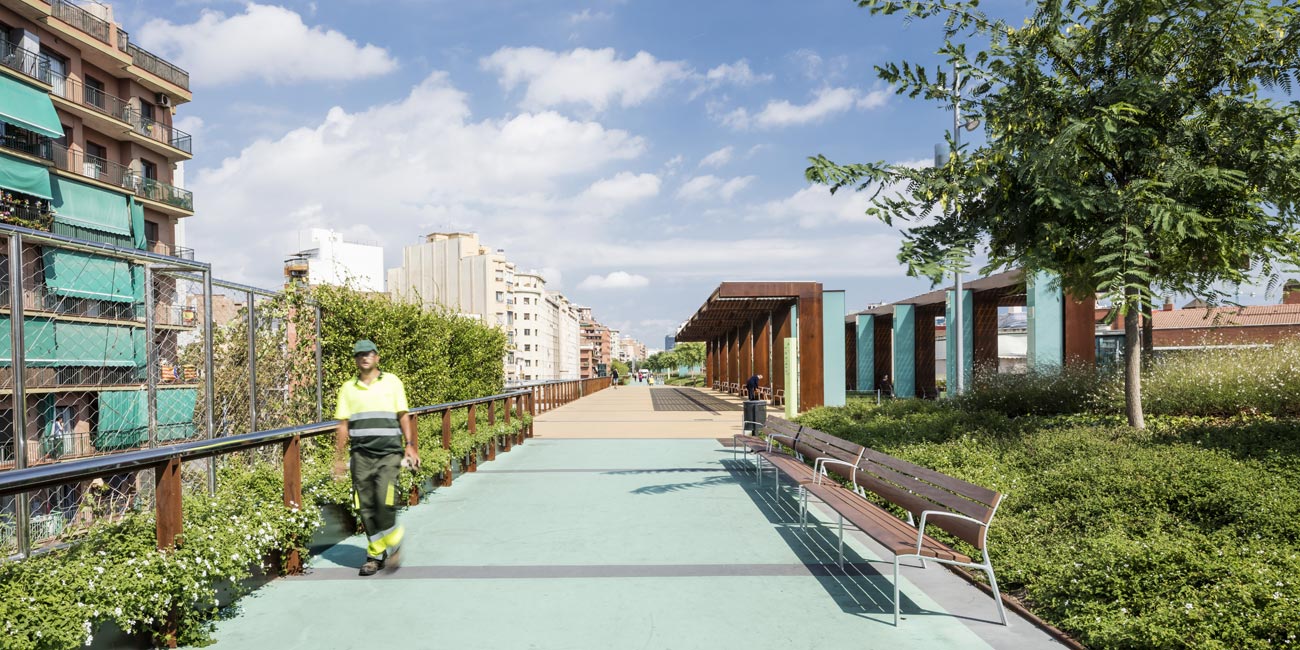 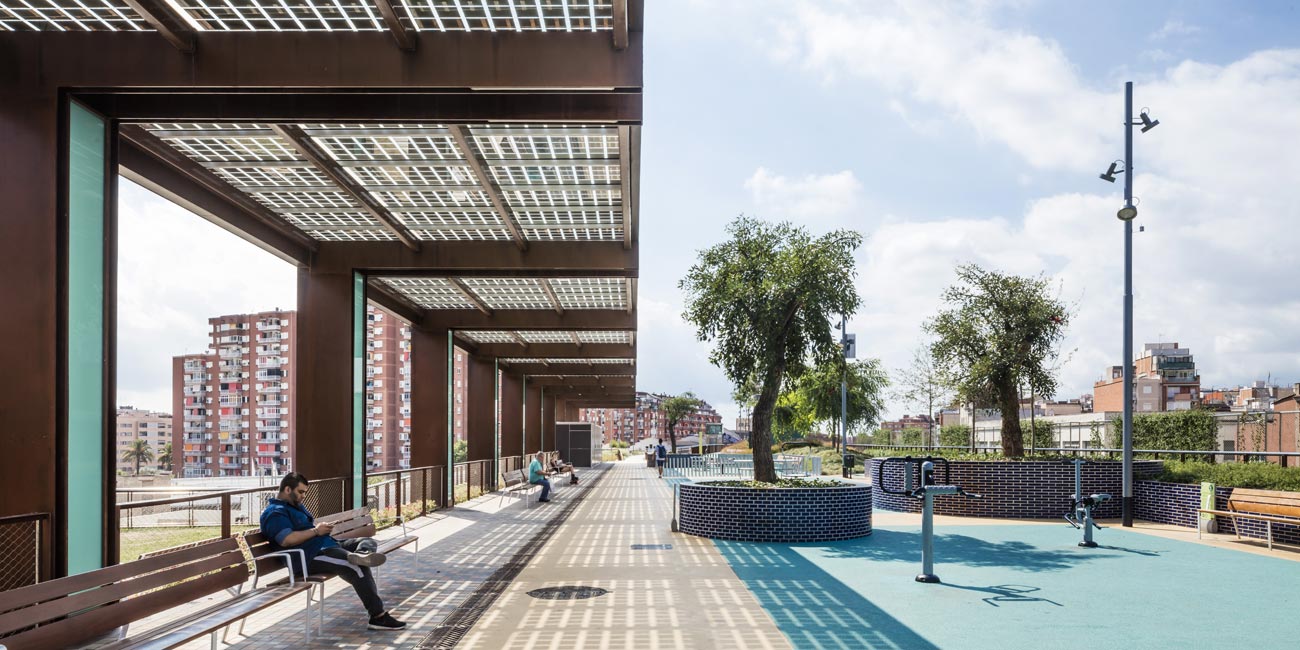 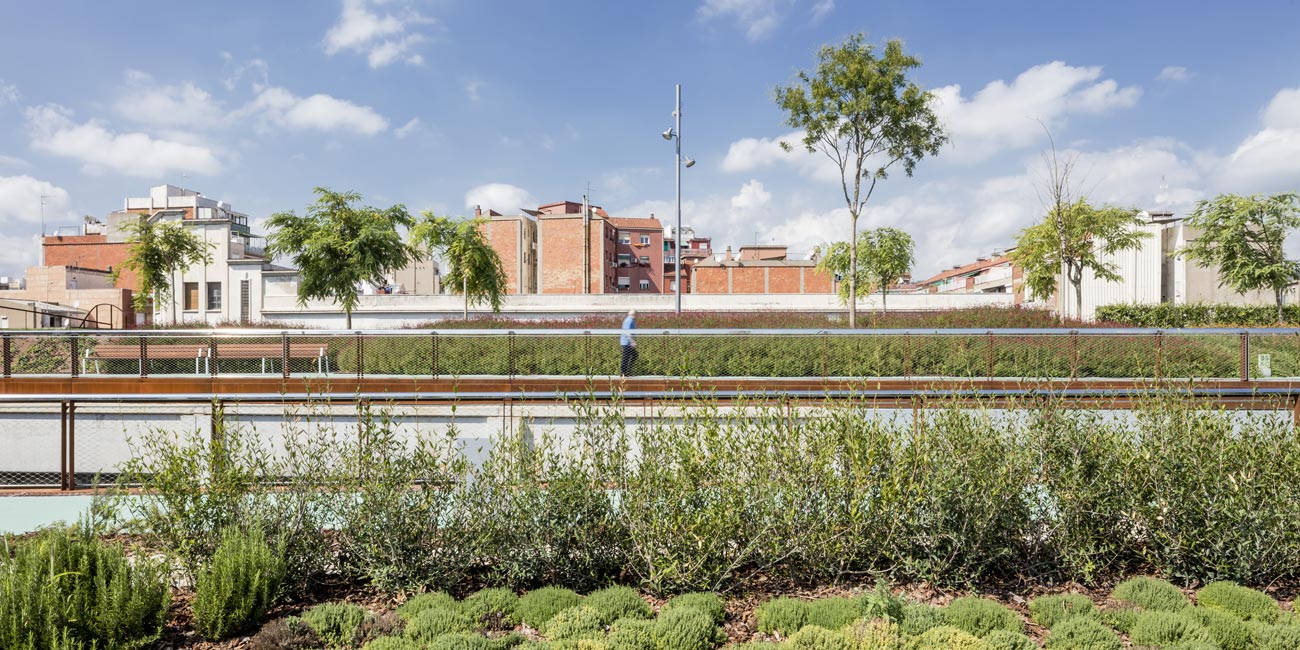 Along with the greenery on the roof itself, climbing vines were planted all along the north façade (Hedera helix, Trachelospermum jasminoides, Parthenocissus tricuspidata) on a system of cables which, in the short term, will help train the vines across all of the façades, except for the glazed sections. 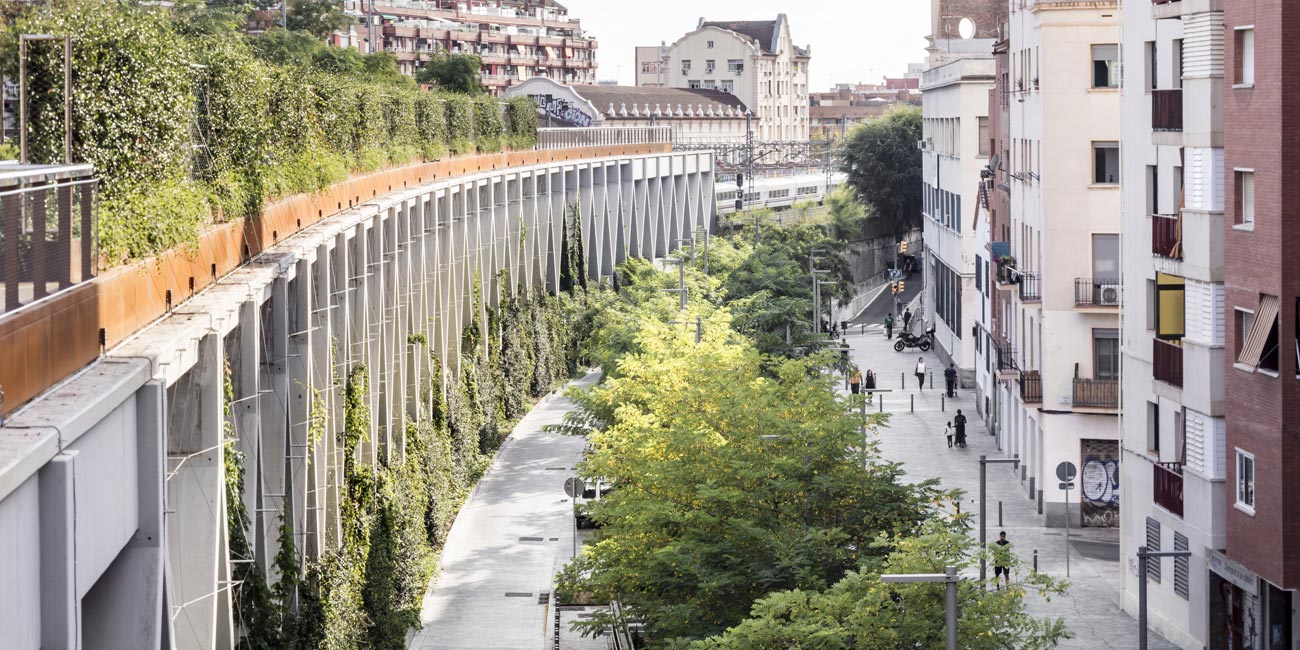 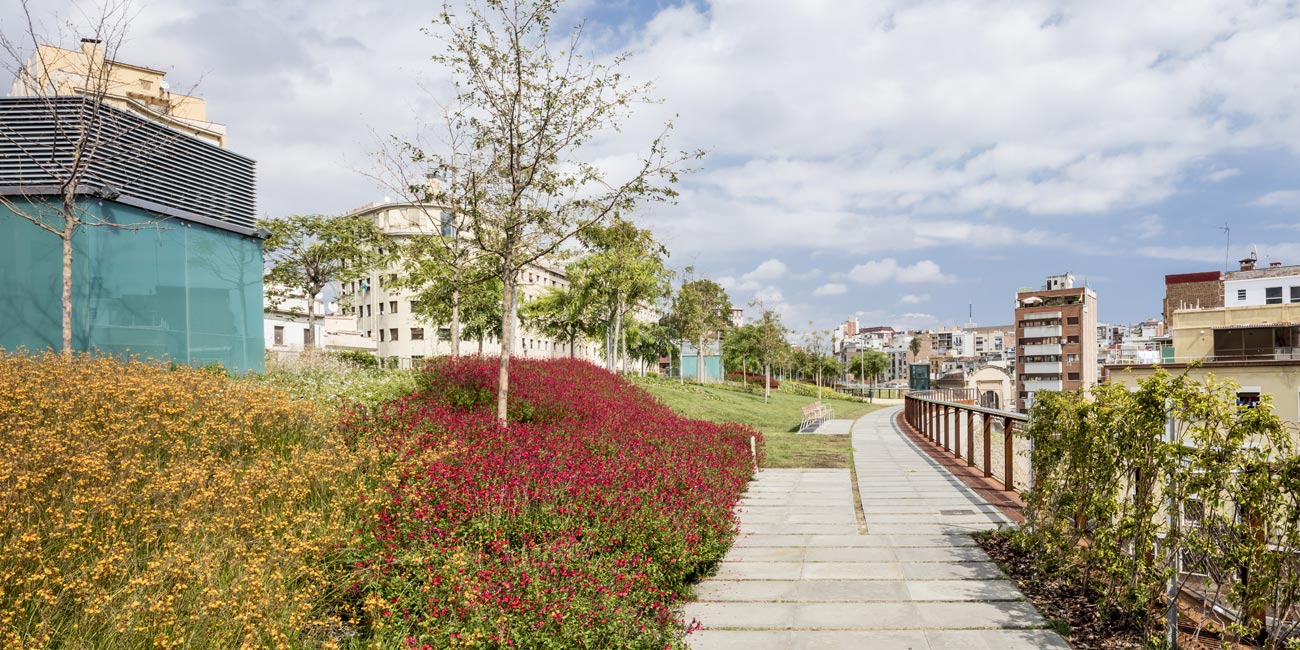 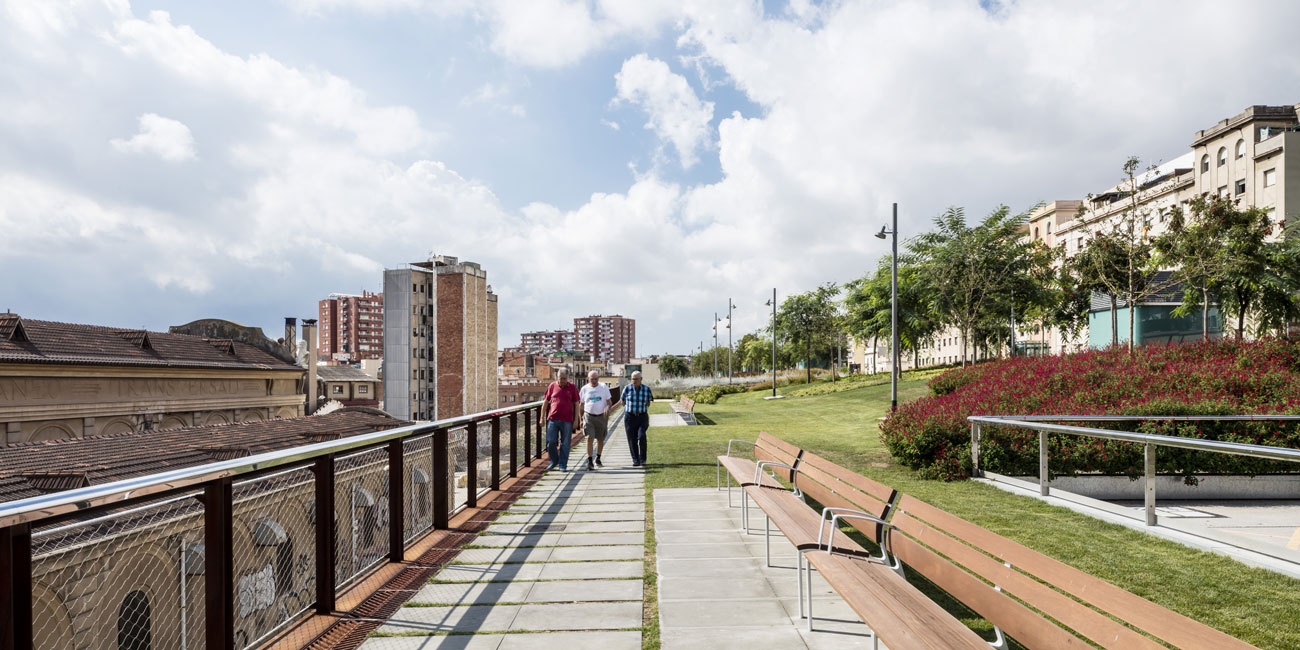