Palestinian refugee camps house the world’s largest and oldest refugee population. Following the 1948 Nakba, about a million Palestinians were expelled from what became Israel. In the 1967 Naqsa (the Six-Day War), Jerusalem, along with the Syrian Golan Heights and Egypt’s Sinai Peninsula, came under Israeli occupation. These annexations were never recognized by the UN and created a million more refugees and internally displaced Palestinians. One of these camps, more than 50 years old, is Shu’afat, whose residents come mainly from the old cities of Jerusalem and Hebron. Following the Oslo Accords, all camps in the West Bank and Gaza came under the control of the PA except for this one, which stayed in a limbo, sort of ruled by UNRWA.

Shu’afat RC is located in East Jerusalem, surrounded by illegal Israeli settlements and by a wall that separates them. The area is about 0.2 km2 with around 50,000 refugees who are stateless citizens. It is a dense concrete jungle, a non-place left behind in a permanent temporariness.

Due to the age of these refugee camps, the lack of public space is more tangible. At the same time the need for it is more pressing. The refugees came from different locations, and they were forced to live together at a certain point, whether they liked it or not. There was much tension as a result, but at the same time new communities emerged. New alliances arose with specific needs, but the architectural solutions that responded to these needs were generally cumbersome. The limited space available does not allow much leeway, presenting a challenge for architectural practice. 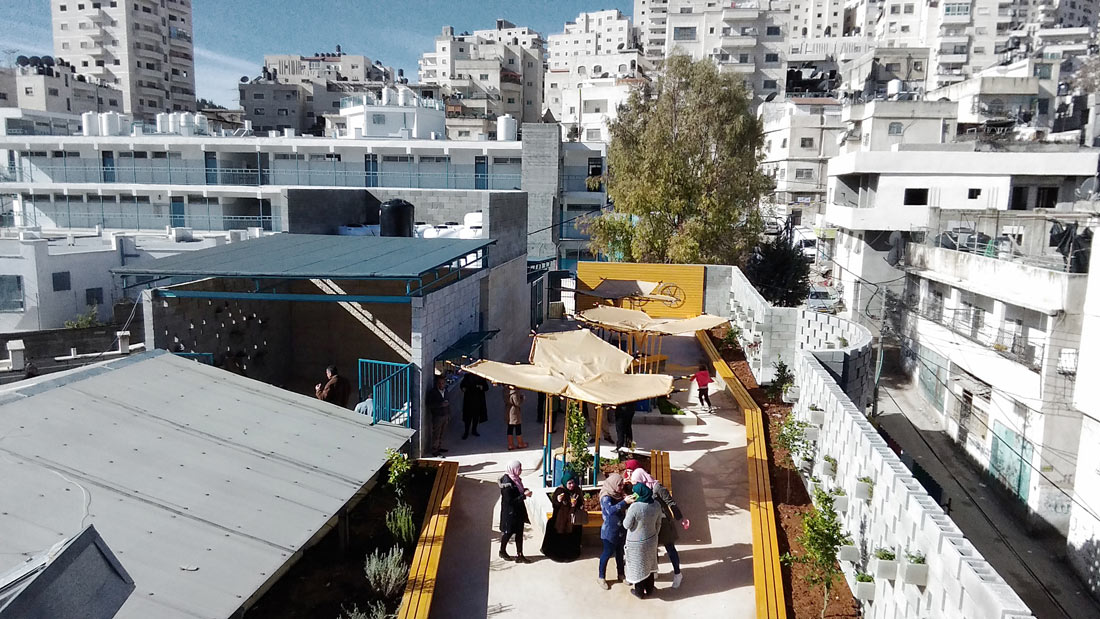 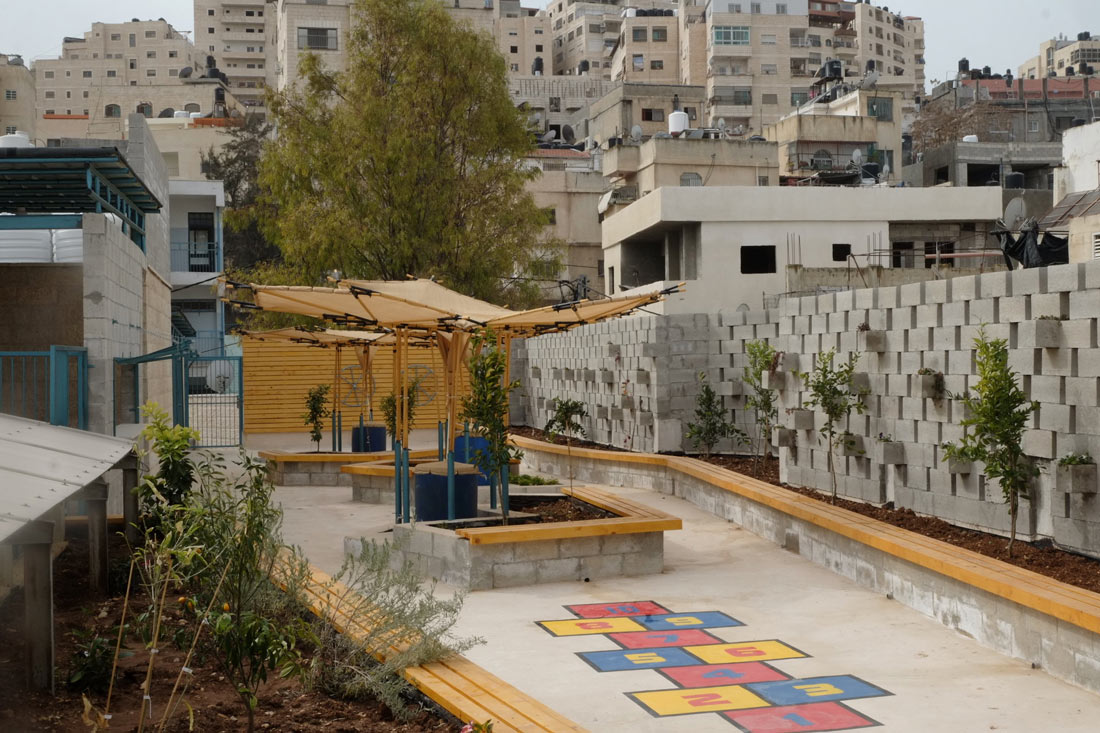 I have been based in the camp for two years, on and off, learning from the people about their backgrounds and “temporary” situation. Together we have made a map of potential empty spots – in-between spaces, like solid rooftops and alley junctions – understanding these sites as nodes in a possible network. At the same time, we were looking at the social networks and their needs, in part at open community meetings, where the main neighborhood associations of the camp presented their needs. It was a slow process that took an entire year.

We set up a potential green space network, looking at patterns of circulation, meeting places and types of activities, commercial zones and types of business, especially for groups with a high risk of social exclusion like children and women. We paid attention, for instance, to children’s street games, routes to schools, and places where women meet, etc. 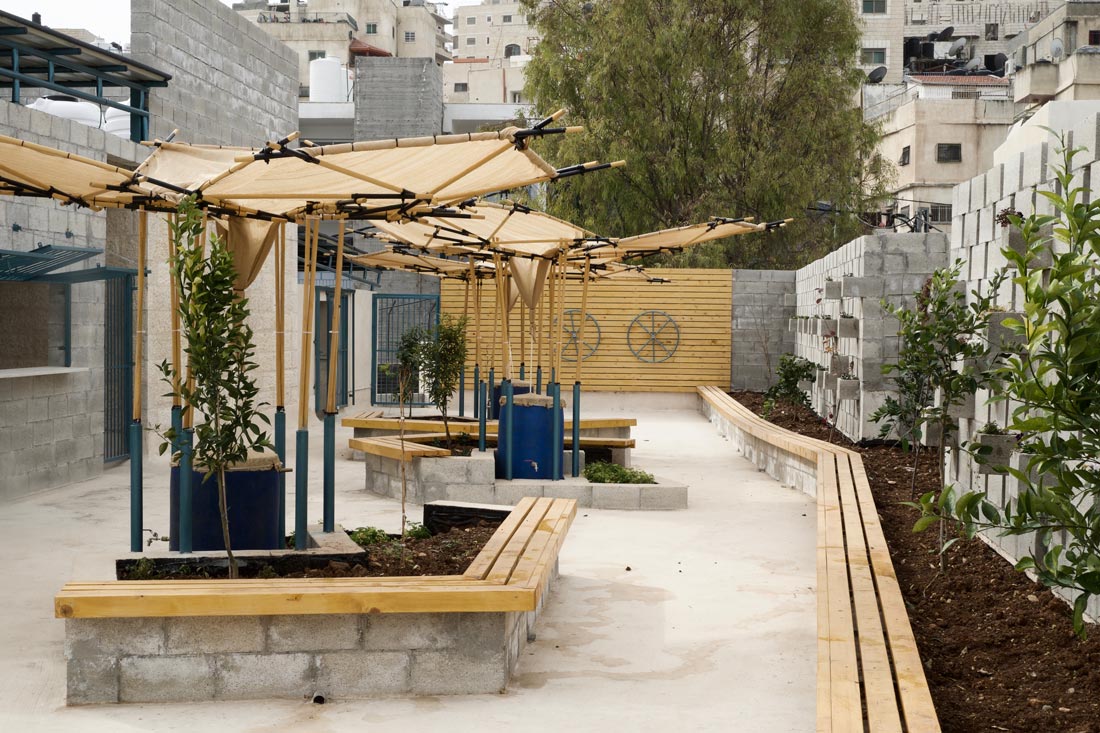 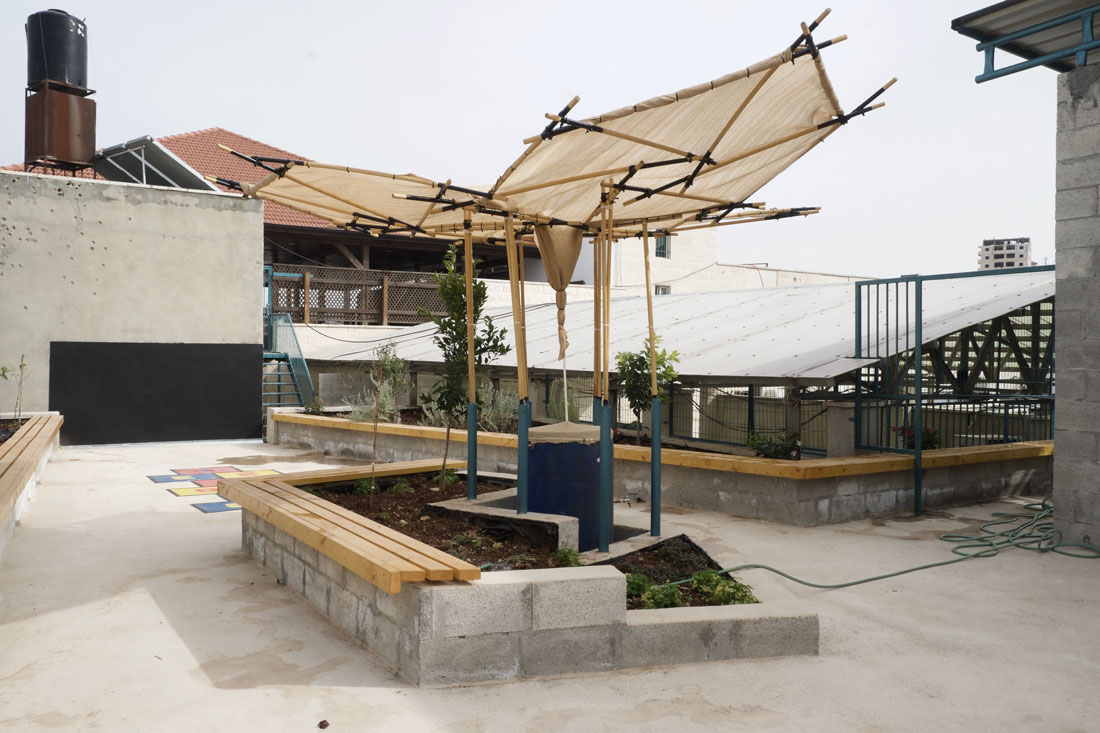 As a start, we set up the first “public square” on one of the rooftops. It is supervised by the Women’s Centre, which is based in the building.

Because it can be reached in a number of ways – from the Women’s Centre, the street and other rooftops – it was chosen as a shared space, which various groups could use for diverse activities at different times of day.

The aim of the project was to create a fully equipped outdoor space, a safe place where people could gather to grow plants, exercise, relax or exchange knowledge. The simplicity of the floorplan allows for multiple combinations of use, according to the needs and desires of the main users.

The entire project – from design to construction – was conducted through participatory workshops. In this way, the users would be more attached to the space. They would feel like it was their own design. At the same time, they could use this experience as an inspiration for other spots in the camp, letting the network grow spontaneously.

Little by little, the users became the designers and our work became to facilitate the process. We studied solutions for creating a comfortable outdoor space, using only the materials that we could find in the camp. In this way, we made it possible for the most vulnerable group – the women – to become the leaders of the first public space in the camp. 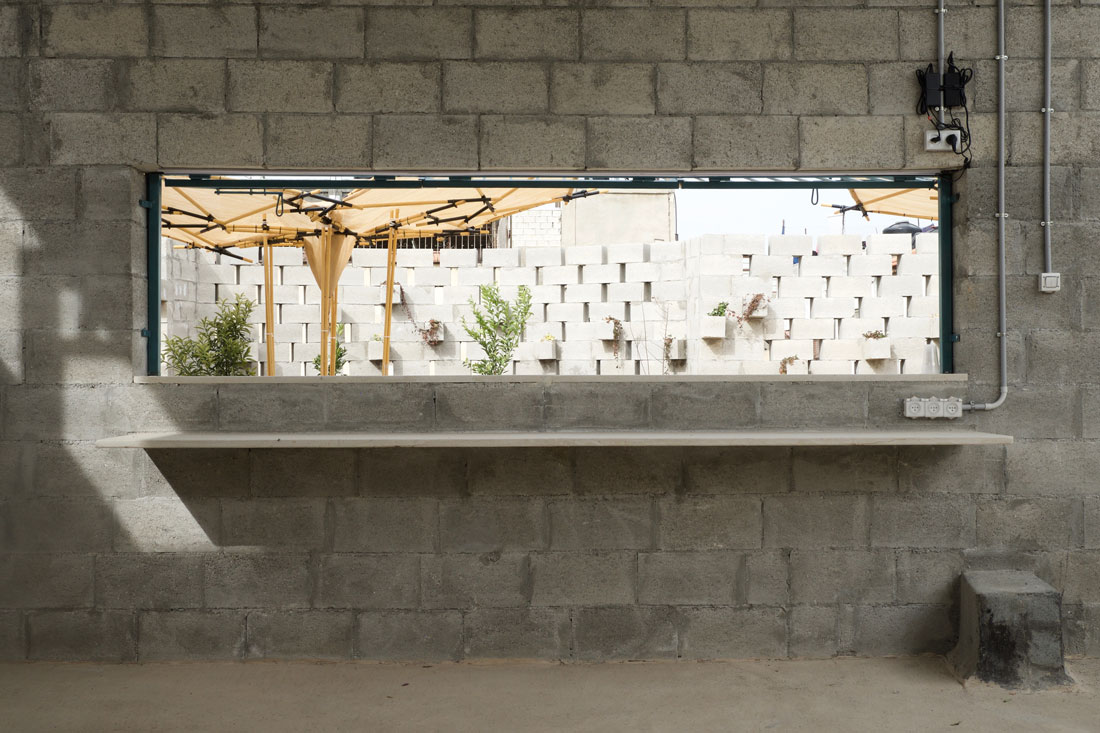 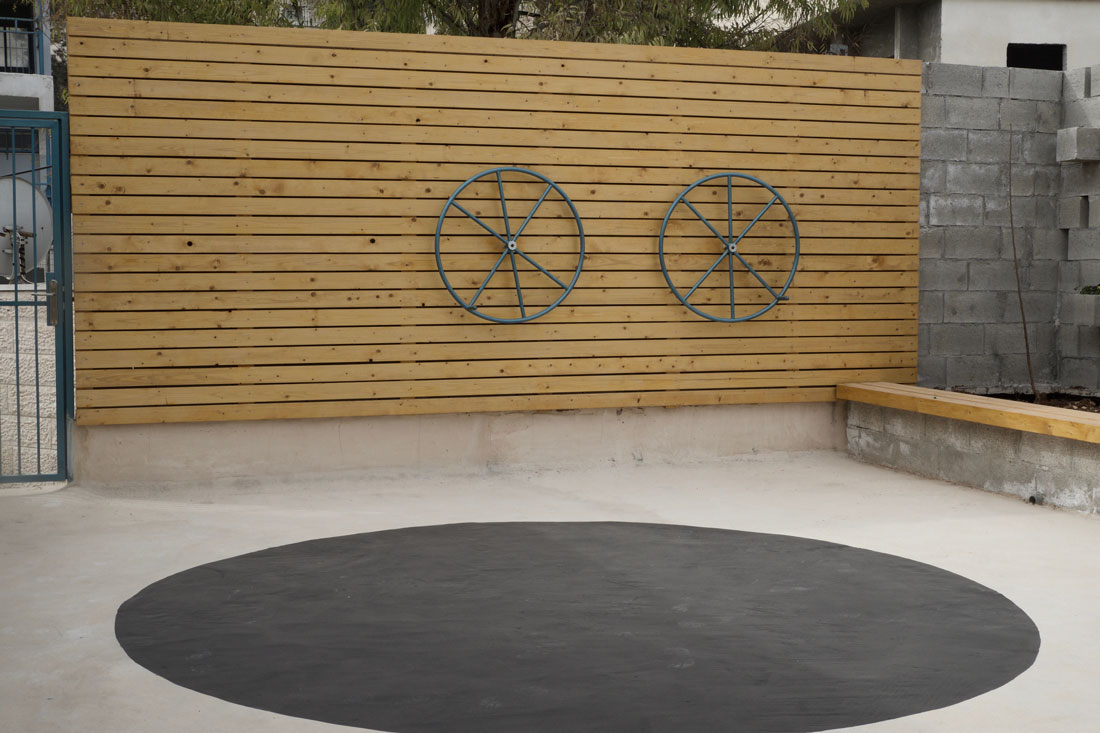 Refugee camps are particularly high-risk areas, where dense population is connected to an insufficient water network. Shu’afat refugee camp has one of the highest population densities in the West Bank. It is also located in the sensitive area of East Jerusalem and surrounded by three Israeli settlements.

When we started planning the green areas of the camp, the main issue was water collection and storage. Basically, we had two things in mind:

1- Water collection from the environment;

2- Water collection from the network (controlled by Israel).

With regard to the first option:

Jerusalem has heavy rains for two months of the year, during the winter time. Mostly the rest of the year is dry, but with huge temperature variations between day and night. This creates condensation water that, when properly collected and stored, can be used as irrigation water.

We held workshops to generate an efficient structure that could collect as much of this water as possible. At the same time, the structures had to be easily built and replaceable in case of damage. This became the heart of the whole design and somehow the symbol of the space. Overall, even if a water shortage comes, we will still have water in our square.

With regard to the second option:

It is important to mention that the water coming from the network is low pressure and is also a tool used for social control. When refugees manage to store a decent amount of water in propylene water tanks connected to the network, these tanks become targets of the Israeli military when they break into the camp during clashes. In response, in our project area we prepared a specific spot for the building’s general water tanks, which would be protected from gunfire but accessible for management. Originally this was not related to the terrace project, but it became one of the main issues to be solved. In fact, it was the first thing we built. 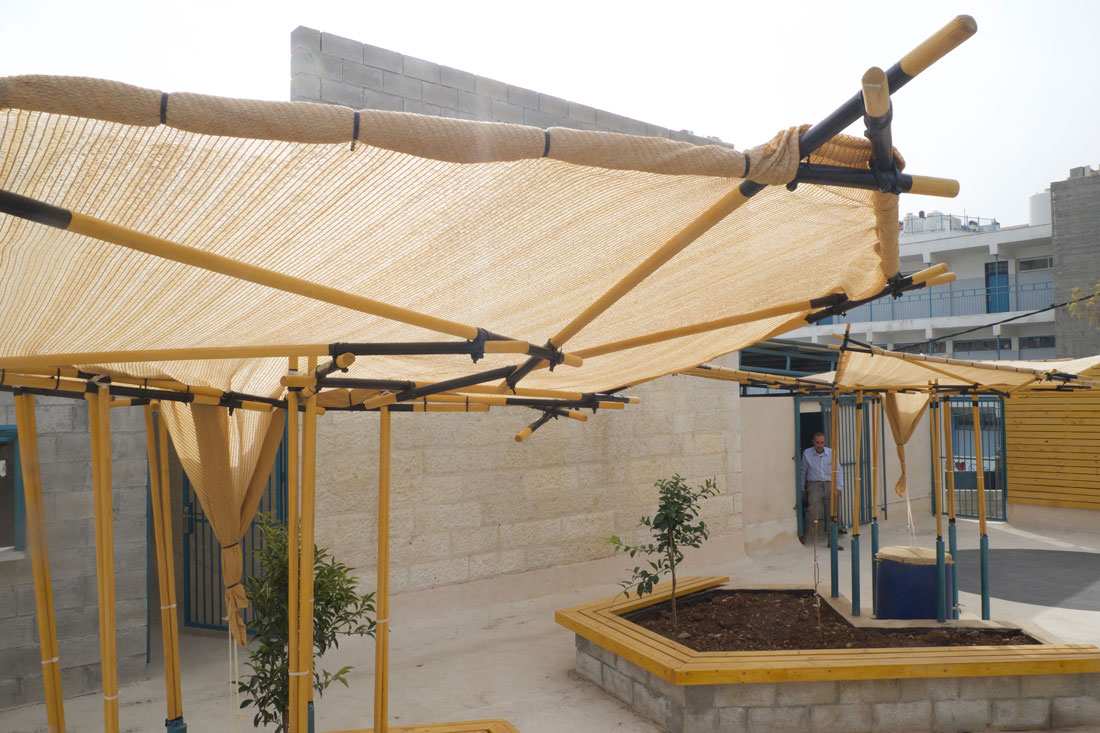 This was meant to be an ongoing project, where the construction of the spaces would be workshops for exploring ideas and providing the refugees with the tools to implement different solutions in their houses. That way, the network could grow freely depending on the residents’ needs, while creating public, semipublic and community green areas.

Since the Trump administration cut the funding to UNRWA, the project is on hold.

There has also been movement toward tearing down the camp to extend the adjacent settlements. Last week, the Israeli military started the demolition of some houses on the perimeter of the camp.

Forced migrations bring together people with different backgrounds and realities. These people are placed in temporary settlements for uncertain periods of time. Refugee camps seem to be unbreakable bubbles detached from reality, non-places.

Architectural schools in many countries study “temporary shelters”, and well-known firms design emergency housing. In reality, these temporary settlements may well last for decades and become “temporary cities”. We are not providing solutions for basic infrastructure (like access to water), public functions or public spaces.

These complex situations require suggestions for long-term occupation, keeping in mind the temporariness and the “right to return” of the refugees. What we carried out is a survey of the refugee camp, considering the solutions that they have found (or where solutions are lacking), using the materials that they had on hand and felt confident working with. 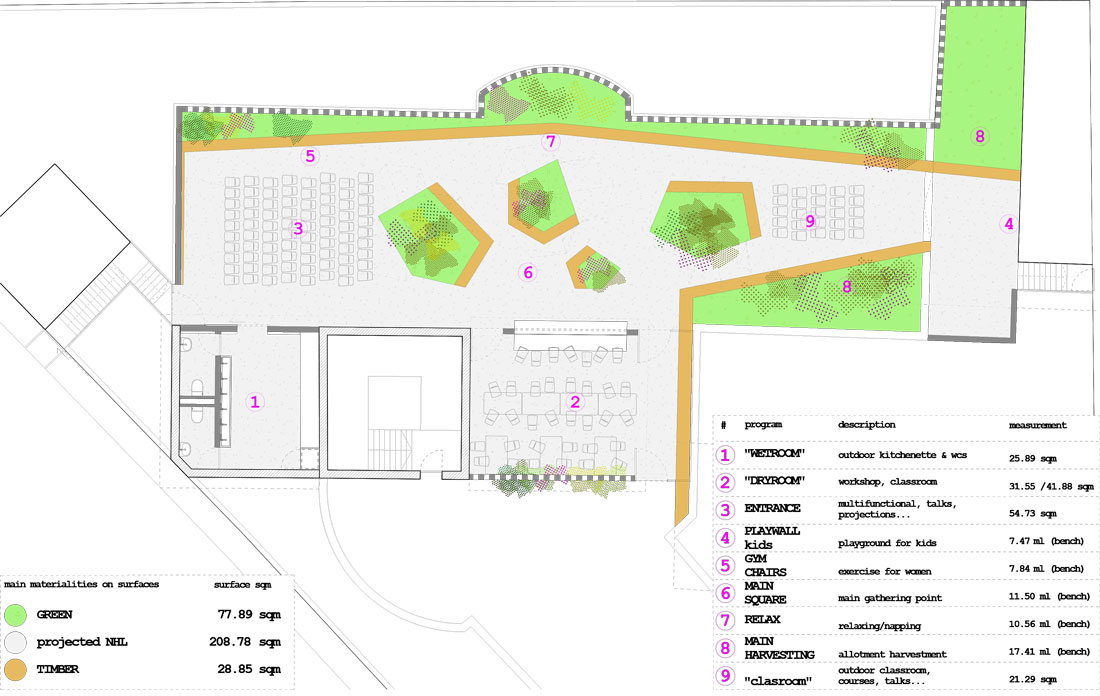 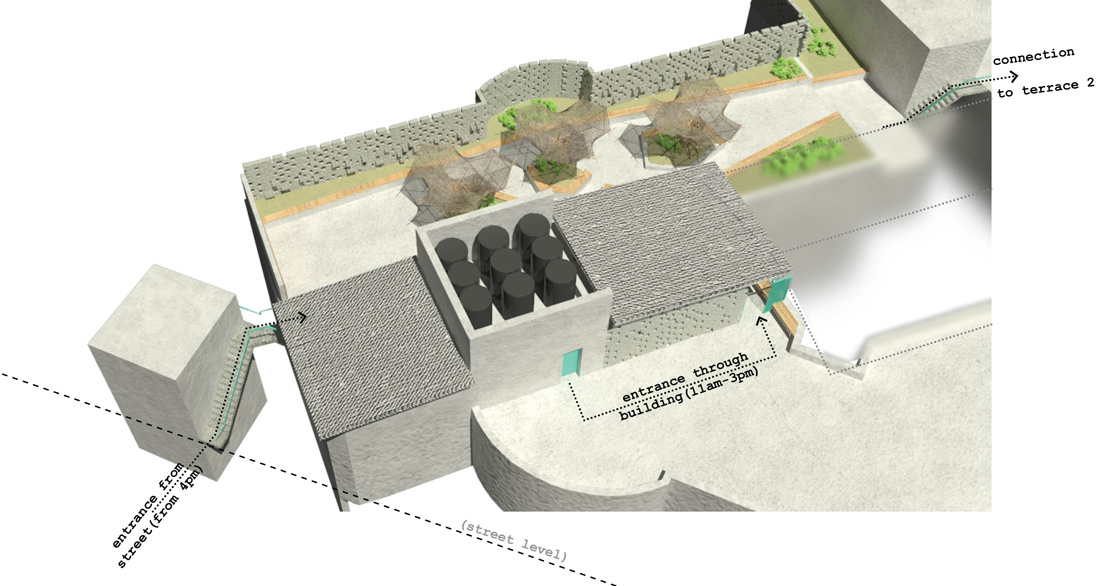