The 50th anniversary of the Museum Of Modern and Contemporary Art – MMCA coincides with the centennial of the establishment of the Korean Provisional Government in Shanghai on April 11, 1919: the birth of an ongoing revolution. Architecture and Heritage: Unearthing Future connects outdoor spaces at the heart of the city’s center and provide a platform for commissioned architects to reflect upon Seoul’s modern heritage while highlighting issues facing urban life in today’s world and in the future. The Perpetual Spring Pavilion, designed by Obra Architects in collaboration with Front Inc., ObraAbim, Dongsimwon Landscape and Supermass Studio, will occupy the front courtyard of the museum from September 21, 2019 to April 5, 2020. 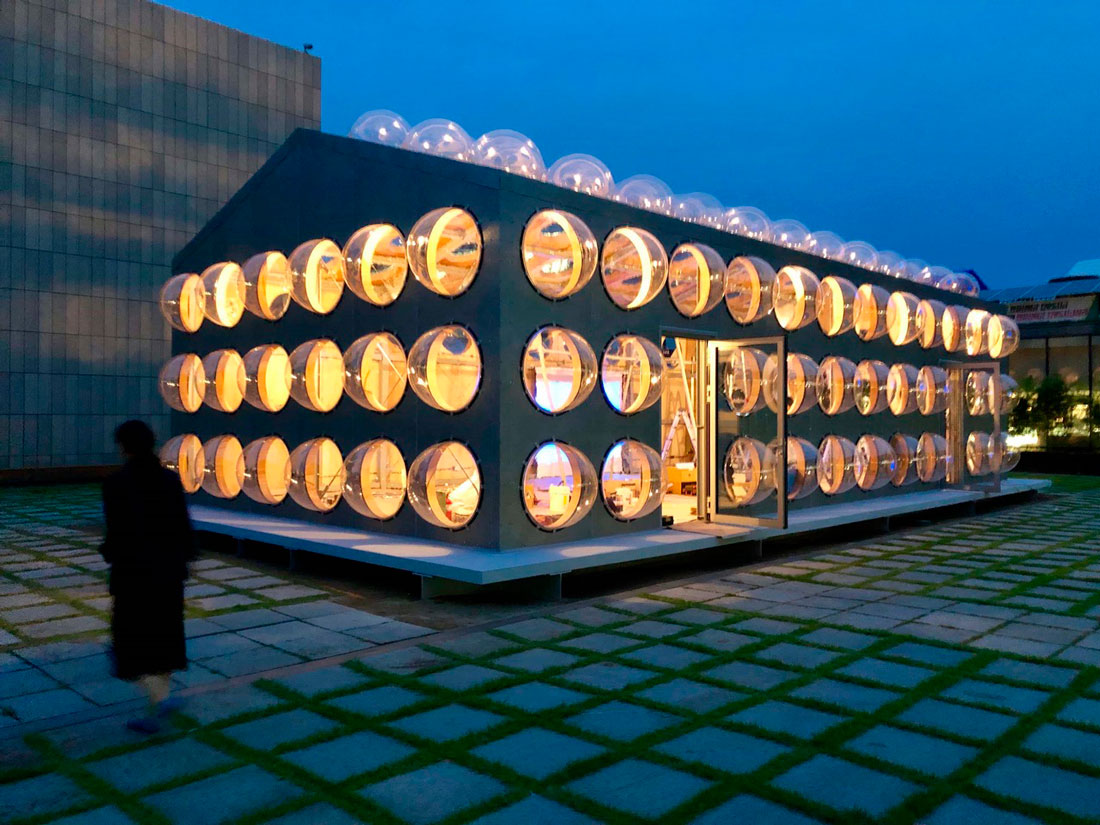 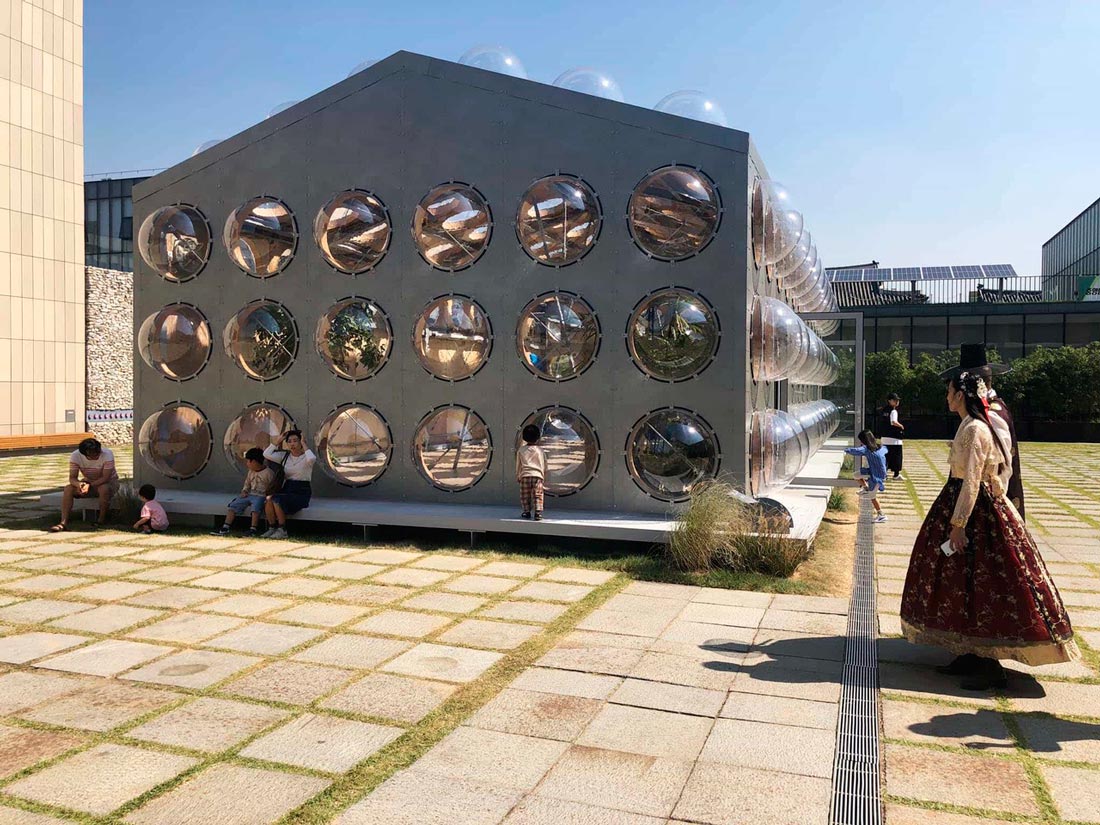 The Perpetual Spring Pavilion will serve as a one-of-a-kind prototype showcasing the functional aspects of urban community gathering: a building as an artificially controlled greenhouse machine to address and bring attention to a pressing global issue of our time: climate change. Combining form and destination with function, the Pavilion is proposed as a “climate-correcting machine,” both a platform for awareness and an invitation to action.

As though it were the head of some giant insect, the Perpetual Spring Pavilion will be outfitted with 150 “eyes,” each a 90-centimeter-diameter polycarbonate plastic semi-sphere, ambiguously separating interior and exterior, while generously allowing sunshine into the space to help keep it warm. The Pavilion is outfitted with a variable climate control system including photovoltaic panels on the museum’s nearby roof, automatic exhaust fans, reflective curtains and a phase-change radiant floor heating system to balance temperatures inside the space and preserve permanent spring-like weather conditions. A specially designed garden inside the Pavilion will be grown during the fall and winter months. Audiovisual displays will inform visitors in real time about climatic and environmental data on a global scale. 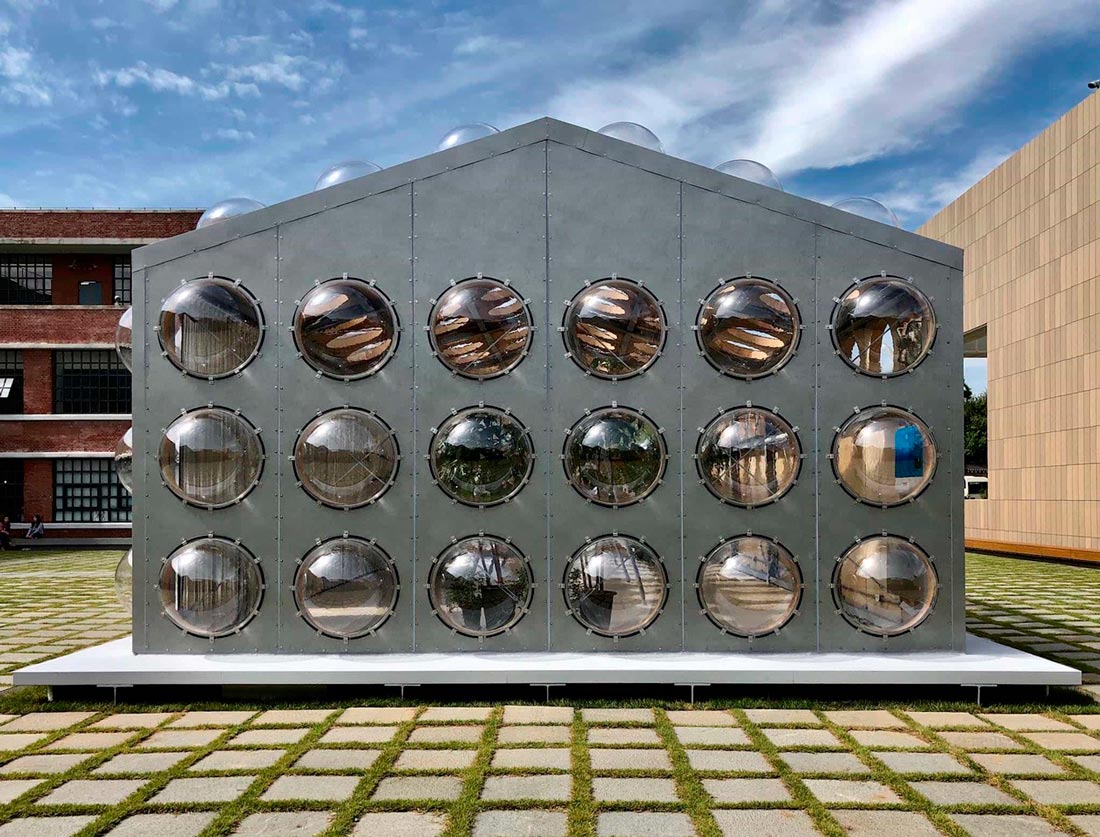 This project is a demonstration, a chance to focus public attention on issues of the city, climate change, our environment, and the future. In this unique experimental installation, we combine elements that will be used as a public platform for events to further broadcast our message as both a work of architecture, a work of art + technology + engineering, and a work of social impact. We have designed the Perpetual Spring Pavilion to be on display and in use in a public courtyard of one of the most frequented and visible institutions in the city of Seoul. The placement positions the pavilion for the widest reach and greatest impact of the message.

Founded on the idea that creating a true space of free public expression is already a radical way of questioning how the city is reproduced and expanded today, the Pavilion, once erected on the grounds of the museum, will serve as a space for public use and activity, gifted to the city of Seoul by the MMCA. Offering a place of comfort during days of severe weather, the Pavilion will be a free open-access venue for a variety of public uses including public lectures, poetry readings, theater, music, dance performances, discussion groups of all kinds, book club sessions, etc. All who are interested can sign up online to use the space during open museum hours at www.perpetualspring.org. Special guests will also be invited to talk about issues related to the intersection between the global climate emergency and the prospects for the unlikely rise of authentic democratic rule and universal justice. 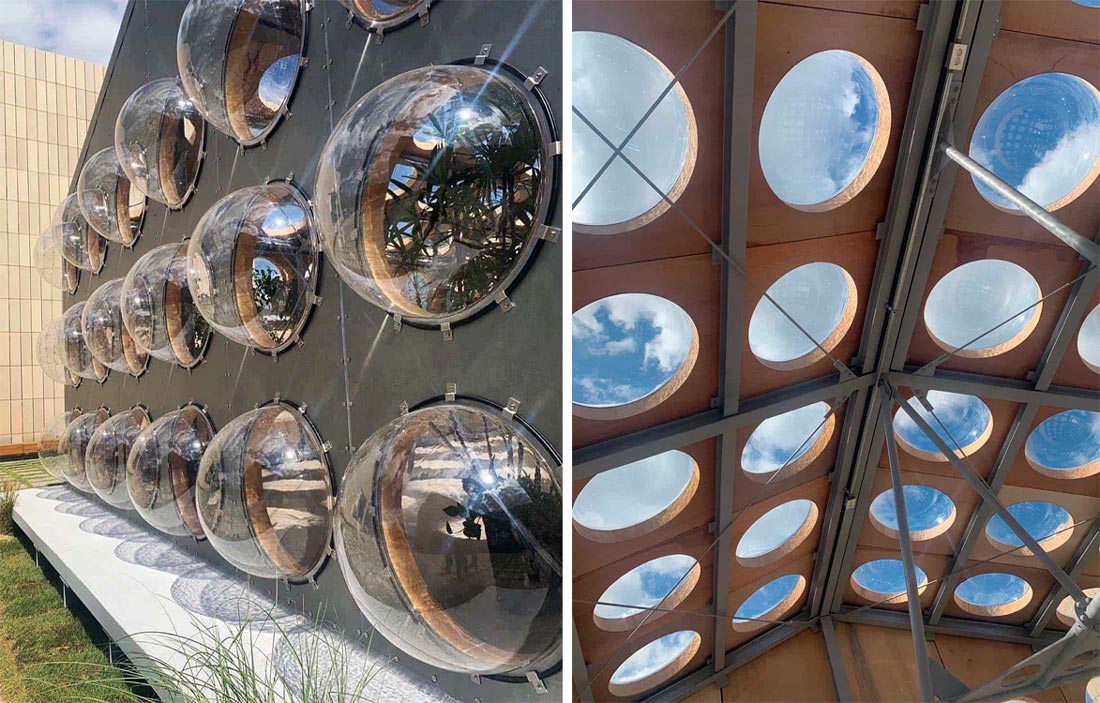 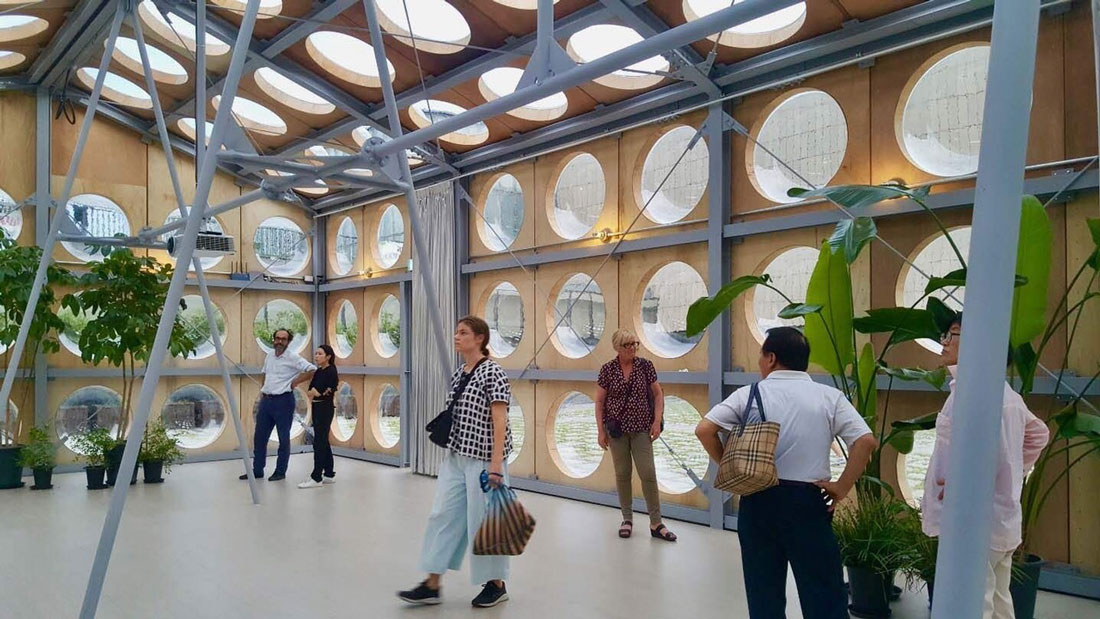 And so, it is by way of a machine that we can then attempt to prefigure both some kind of future and its denial at the same time. If the prevalent economic system has provided storage of the efforts of the many for the benefit of the few, the machine is both empowerment and substitute of human agency towards the transformation of the world into a home. It should come as no surprise, then, that the anticipated fundamental presence in the coming city of impersonalized artificial intelligence is still that of the machine. The unfulfilled promise of modernity in general, and of the Modern Movement in architecture in particular, is that of finally gaining control over the time of our lives, freedom from labor and the possibility to pursue our self-realization and finally attempt to become who we really should have been. The machine is the preeminent tool in that struggle. Perpetual Spring is then intended as both concrete and abstract machine, as a place where the very real parameters of weather gone awry can be rudimentarily tweaked both as modest example and proposed symbolic ritual, and as the repository of collective efforts towards a meta-technology. If the rightful ownership of people’s machines has been confiscated in obsessive fixation with individualism – the antidote for fear – new machines shall be invented through a popular effort towards an alternative technology. 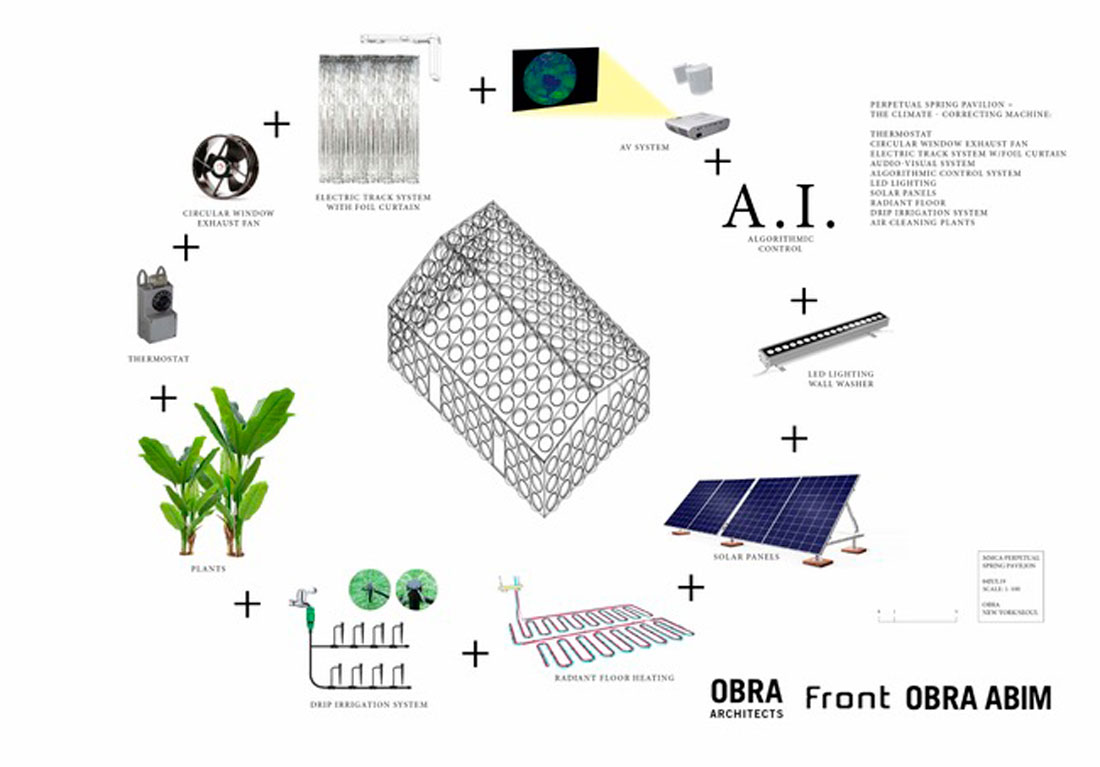