NAWA is an ultralight, durable construction made up of 35 FiDU steel arches. Put together, they create an open portal that is easily accessible from all sides. Its bionic form and highly polished surface, which reflects the surroundings, create the effect of a naturally growing sculpture. NAWA’s look changes constantly throughout the day and gives off an amazing play of light at any time. 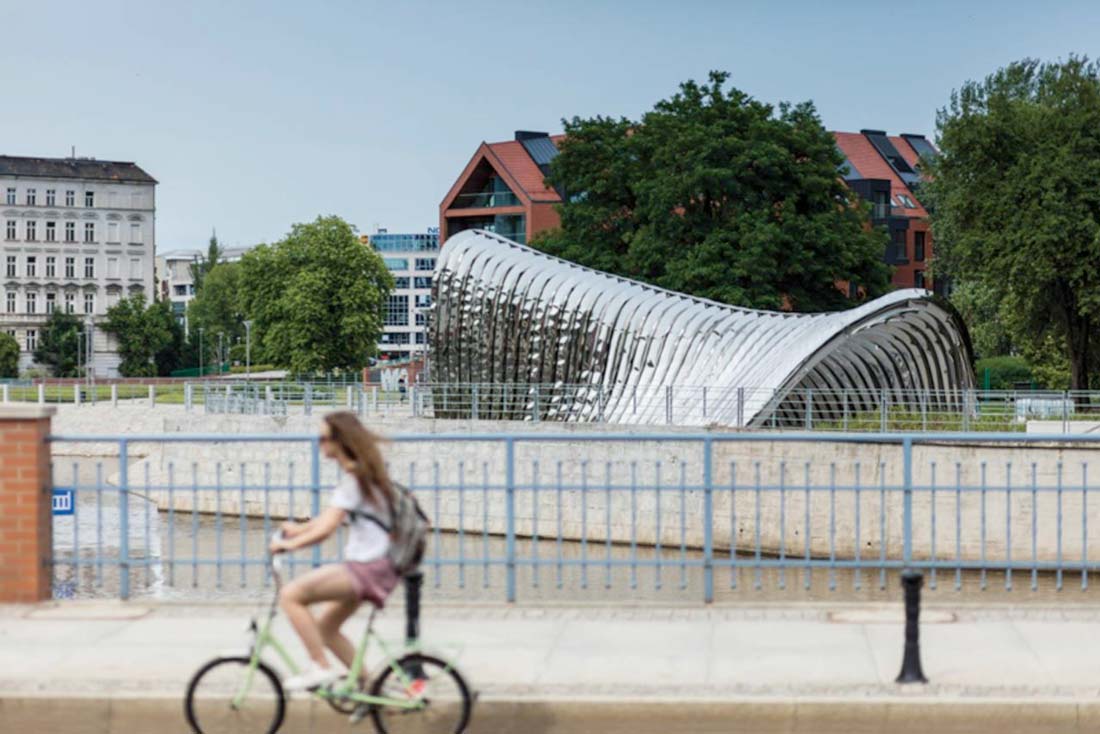 The NAWA sculpture sits on Daliowa Island. The smallest of over a dozen islands in Wrocław, it is situated in the primal current of the Odra river and is surrounded by both lush greenery and historic architecture. In recent years it has been almost forgotten. Today, thanks to the NAWA sculpture, set up as part of the European Capital of Culture, the island can be re-born and remind the citizens of Wrocław of its presence. 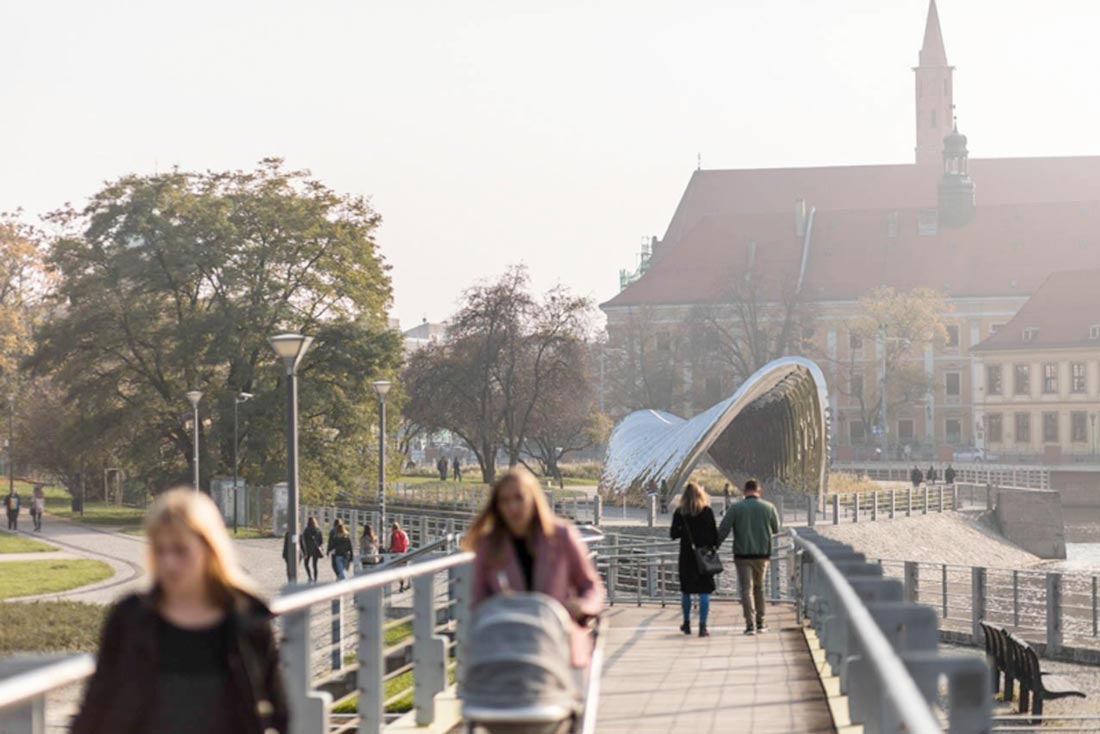 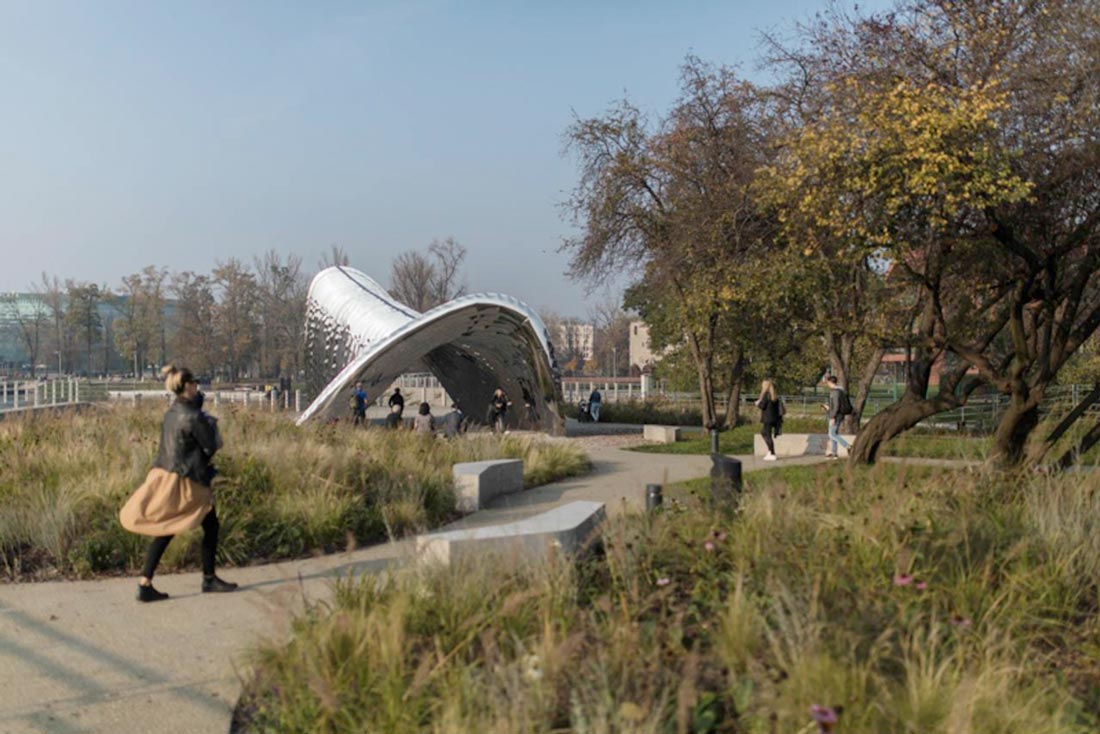 NAWA is a part of the Daliowa Island revitalization, which includes turning the island into a place full of greenery which can also be a meeting place in the city centre at the same time. The NAWA sculpture perfectly embodies these assumptions. It does not ruin the natural character of the island and simultaneously it is an articulate and attention-grabbing urban element in Wrocław.

NAWA sculpture by Oskar Zieta received broad critical acclaim at the finale of Architektura-Murator magazine’s competition. It was named the most innovative Polish architectural project of 2017. Moreover, Oskar Zięta’s design office received the honor of “the most innovative design practice”. 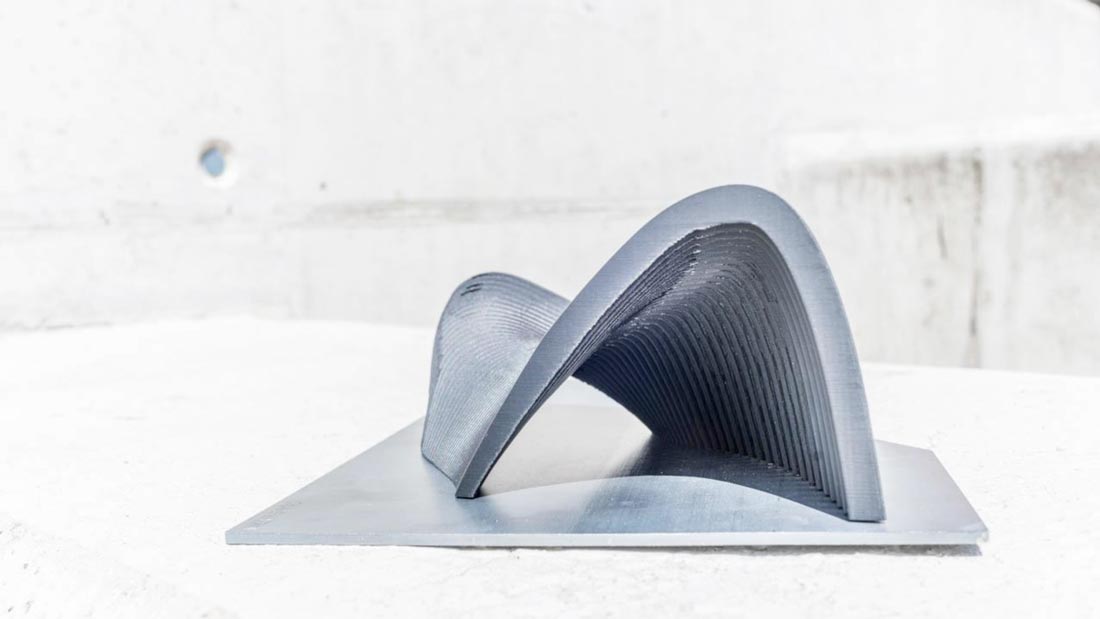 The organic arches are the result of parametric design. This innovative domain operating in architecture, engineering and city planning relies on software which allows for generating blocks on the basis of a combined input of parameters. During the process of computer shaping, forms are generated, which surprise the creator of the sculpture himself. Thanks to the initial parameters, the final shapes fulfill practical goals, such as optimal size, weight, and adaptation to the environment. 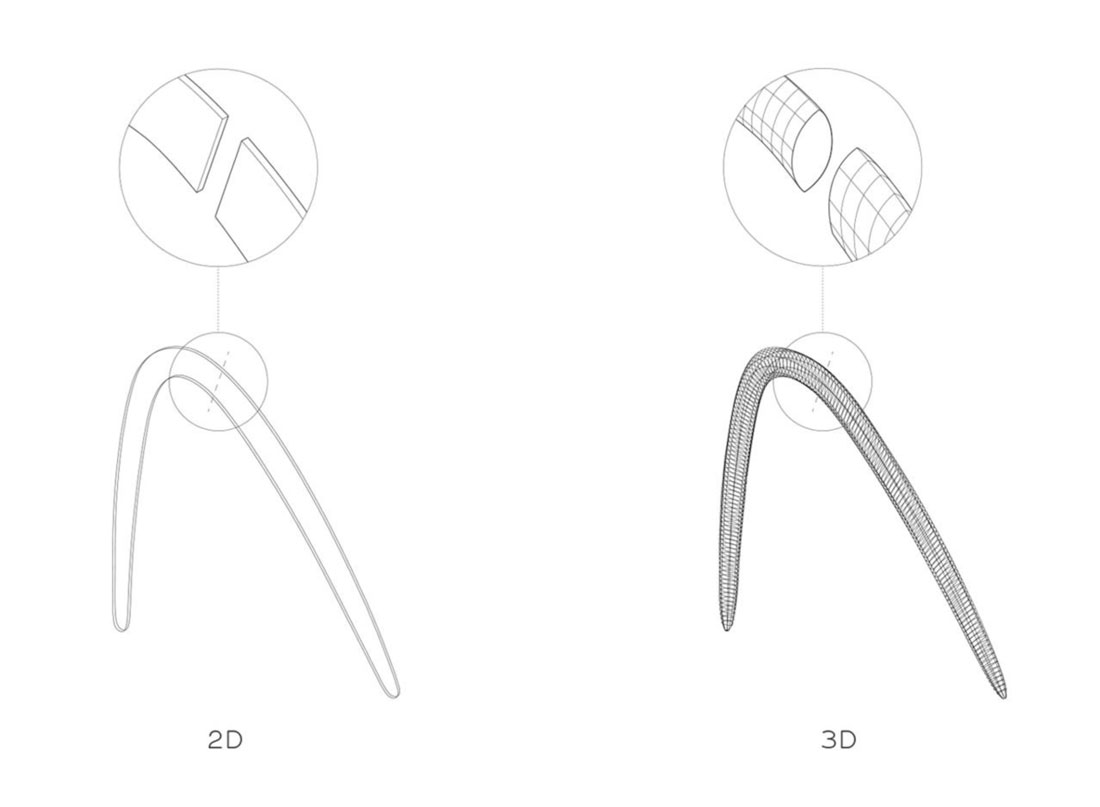 The weight of the ultralight construction was possible thanks to FiDU – the innovative technology invented by Oskar Zięta. It allows for distorting the shapes of steel elements welded together. Through “inflating” it with compressed air, the metal forms become durable and stable, while maintaining their lightness at the same time. NAWA is the first FiDU construction on such a large scale. In that sense, it stands as a manifesto of this innovative technology. 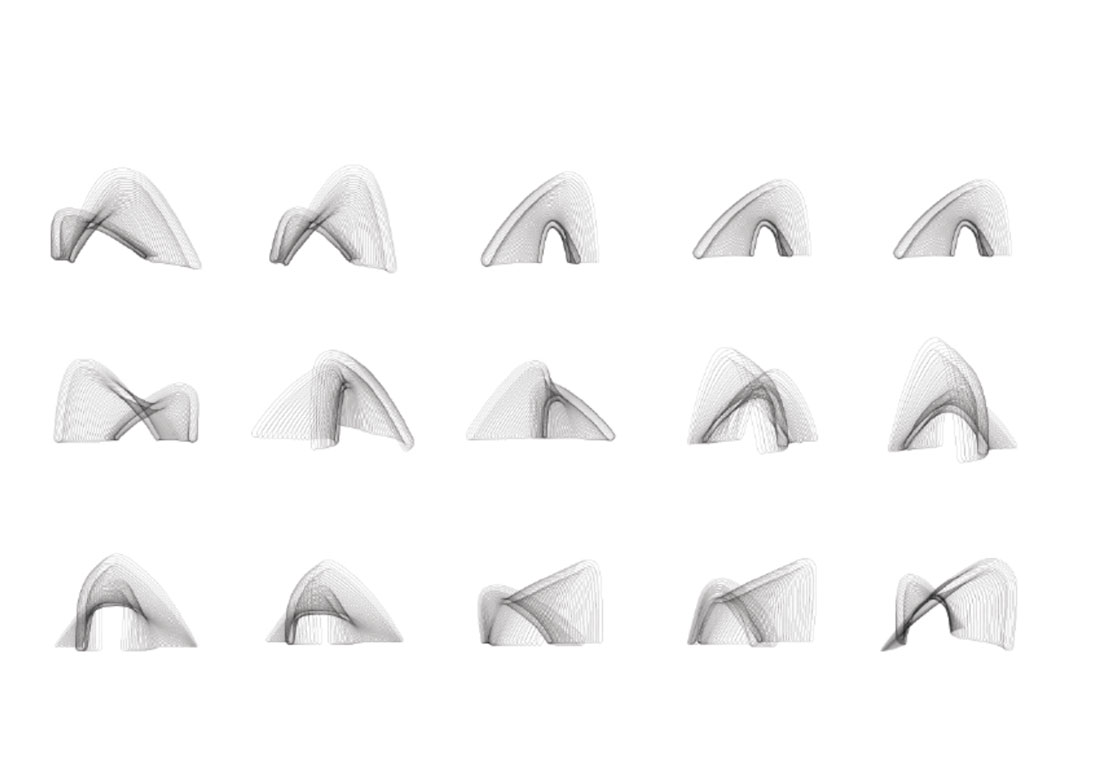 Operating at the intersection of art, design and science, Oskar Zięta reaches beyond the traditional definition of an artist. During the sculpting process, the form is created with the use of digital manipulations. The initial vision of the construction of the sculpture was translated into a digital language, which allowed for measuring the durability of its elements. 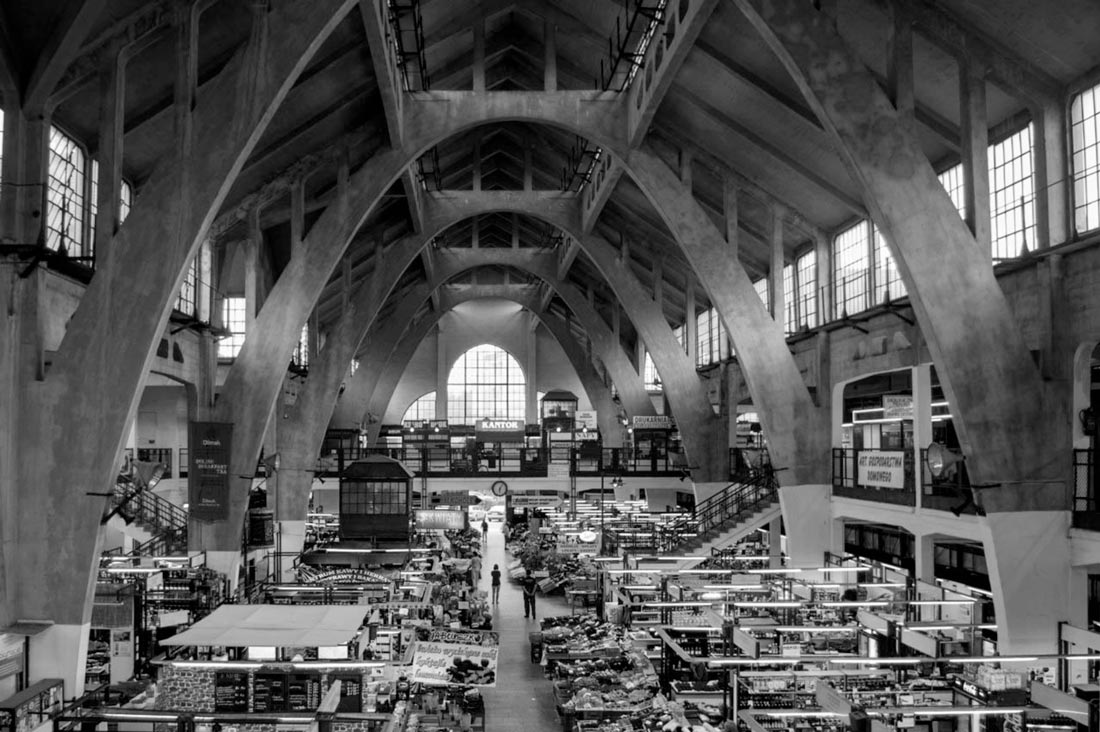 NAWA’s construction is based on arches. Looking at it through the perspective of an architect, an arch is a perfect structure, used in antique and gothic buildings. The invention of the arch was an immense breakthrough in architecture and allowed for building tapered constructions. In the NAWA sculpture, arches serve both as the elements of construction and as an artistic means of expression. 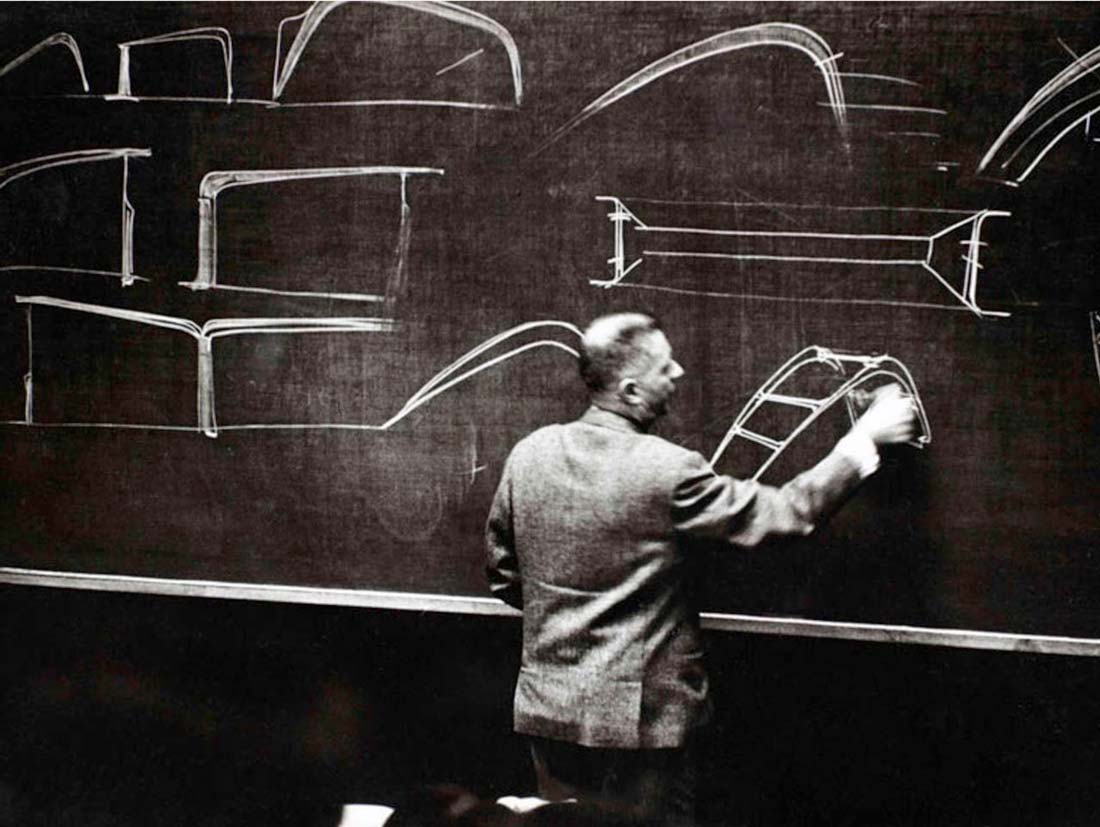 The arch was the main research object for Jean Prouvé, the famous French designer and builder, as it constituted an optimal form for modern constructions. It allowed for the effective exploitation of resources and made the production process relatively easy. NAWA is a manifesto for the innovative use of the traditional arch form, made possible by FiDU technology. 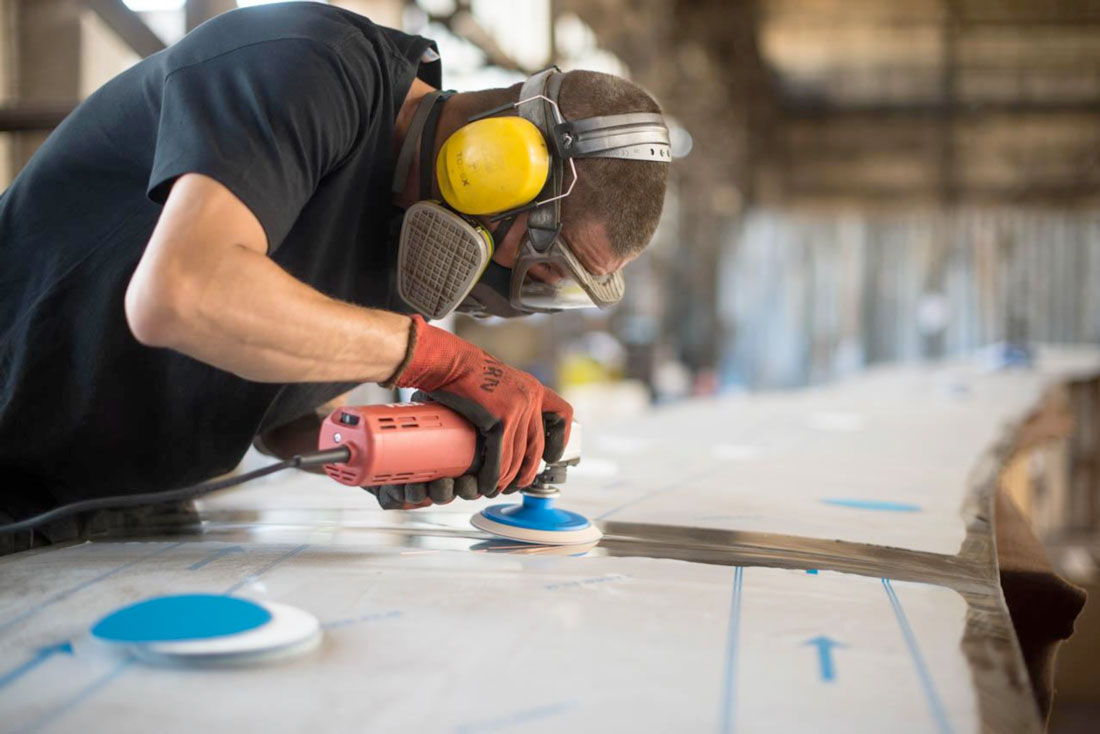 NAWA was born in a special place: a former shipyard. This choice was determined by the size of the sculpture, which required an unusually large production hall and also easy access to the Odra river.

“For months, the elements for NAWA were cut, welded and then blown with air. The vast majority of the work took place in the production hall. As a result, we could save time during the installation on Daliowa Island. The long hours of hard work paid off when we saw the final effect”
Oskar Zięta 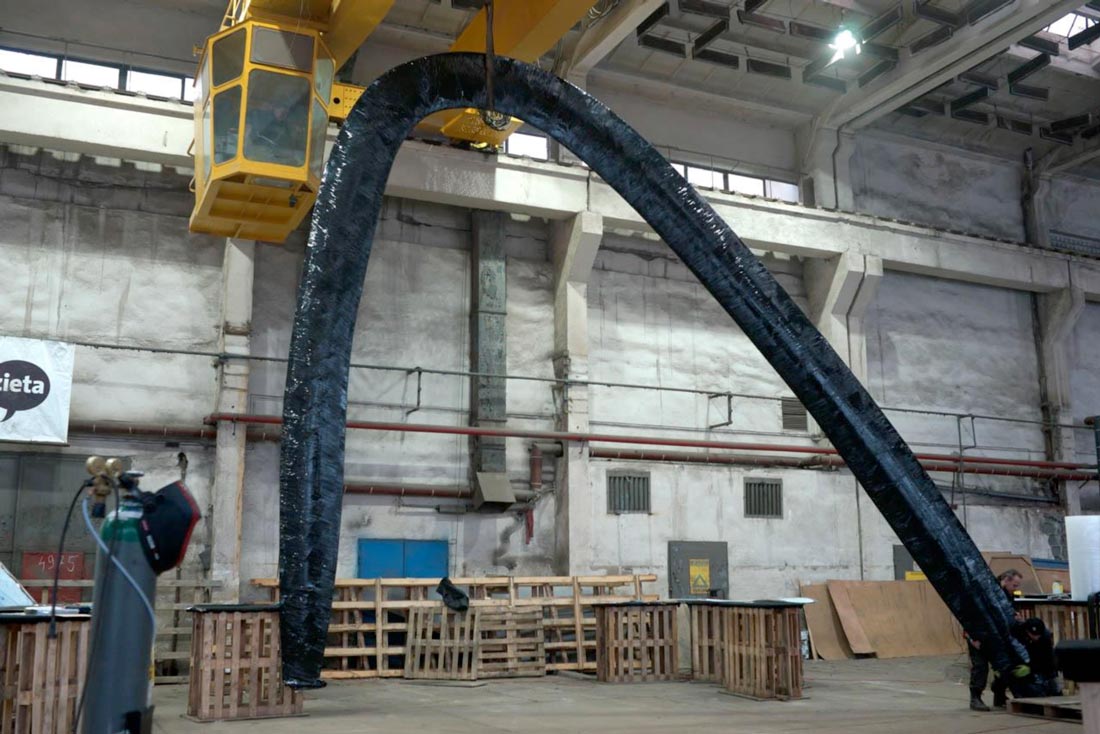 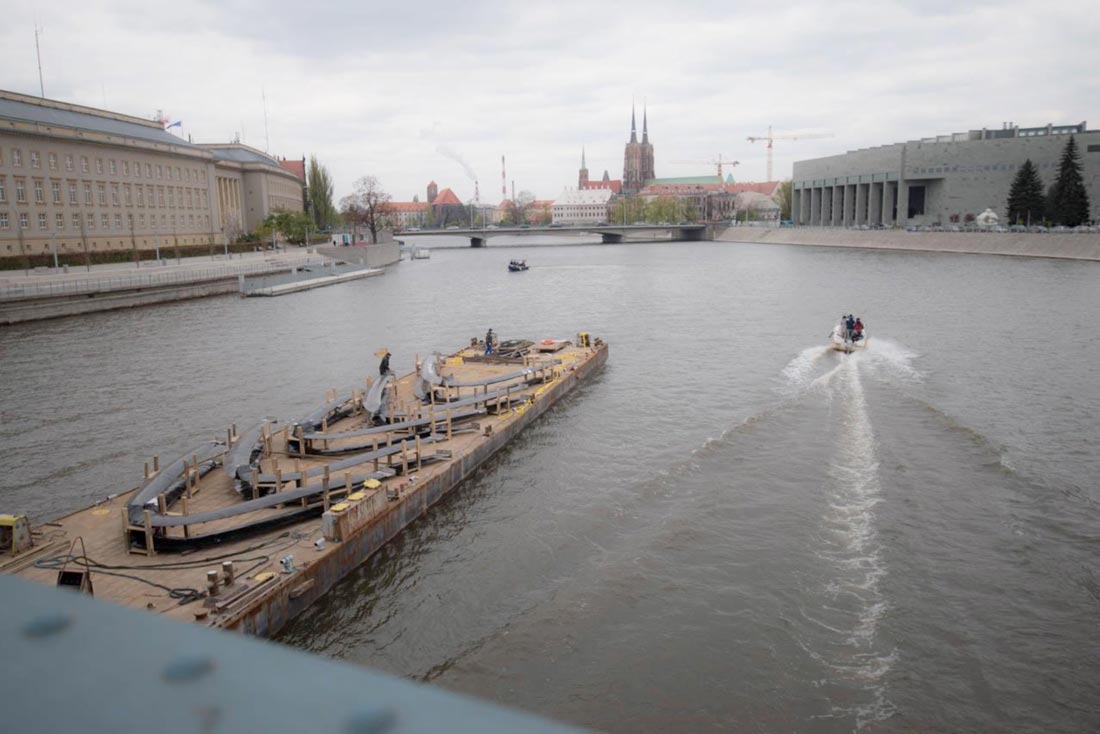 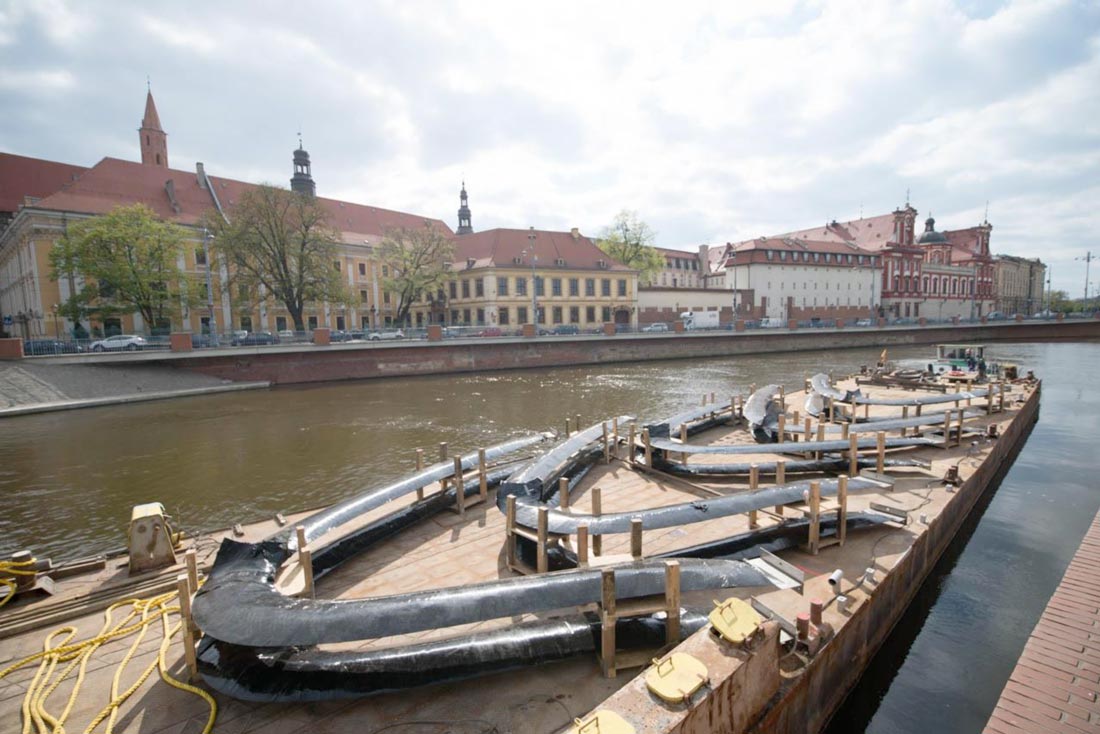 Extraordinary projects require extraordinary solutions. Because of that, we used a special method to transport the arches for NAWA. All of the elements were carried from the production hall to Daliowa Island on barges. The citizens of Wroclaw could witness this spectacular journey from the streets, bridges and banks of the Odra river.

Paradoxically, in Wroclaw – a city famous for the number of its bridges and known as the Venice of the North – inland water transport has lost its popularity over the last few years. Hopefully, such a spectacular project will help in restoring it and bring the Odra River back to life. 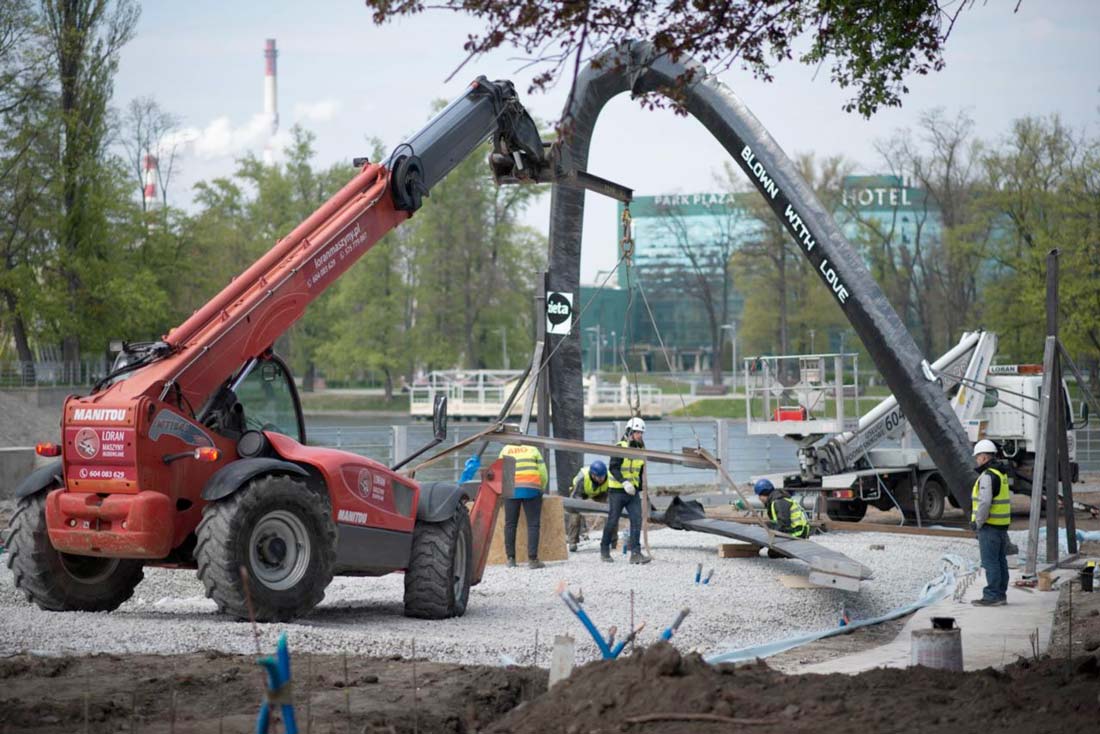 Construction and assembly works began in April. Prior to that, builders and surveyors prepared the ground on Dailowa Island for several weeks. NAWA was transported in parts and then assembled on the island. Because of this solution, the work resembled an installation and took much less time.

NAWA opens another chapter in the history of Daliowa Island, returning it to the residents of Wroclaw. The place became a bustling, open space for meetings, concerts and artistic events.

The sculpture, along with the planned vegetation, will create a consistent organic unity, emerging naturally from the river. At the same time, the realization will fit perfectly into the architectural order of the area and its vibrant life, full of tourists and passers-by. 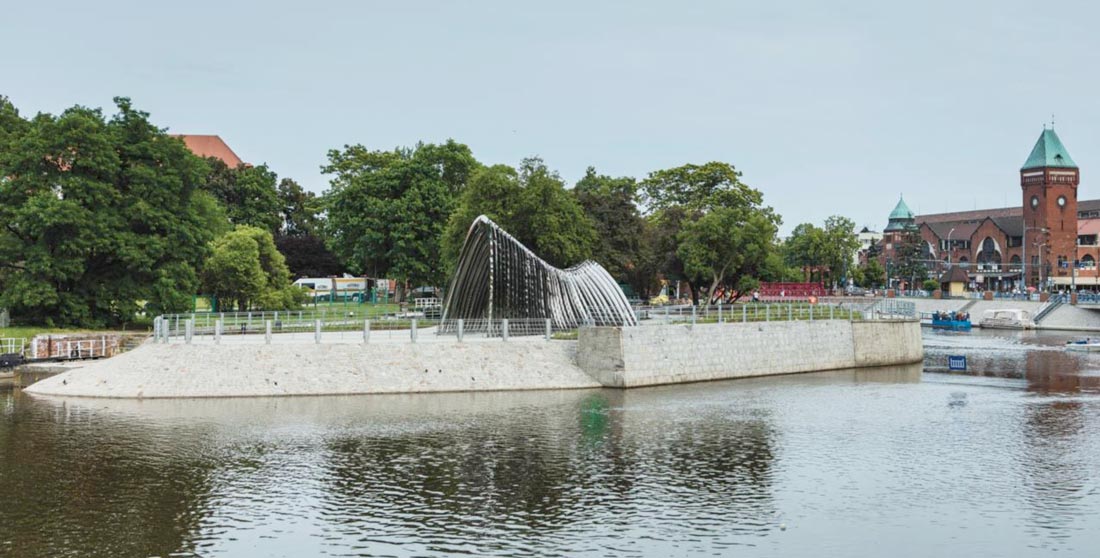 Facts: - Dimensions: 7.5 m x 10 m x 11 m - Weight: 11.2 t - Around 1,000 m3 of air were used to inflate the arches - The production process took about 700 hours of work - Combined length of the weld totaled 2 kilometers - Elements were carried on three barges on the Odra River to their final destination - Around 7,500 new plants were seeded on Daliowa Island around the sculpture

« Organizational Models for Global Architecture
The Origin of Stripes »