Kaohsiung is an informal, lively city of almost 3 million inhabitants. Not only is it the second-largest city in Taiwan and one of the world’s largest seaports, it is also host to a dramatic sub-tropical climate of typhoons, high temperatures, heavy rainfall and regular earthquakes. The new 140,000 square-meter performance complex must cope with all of these extremes. 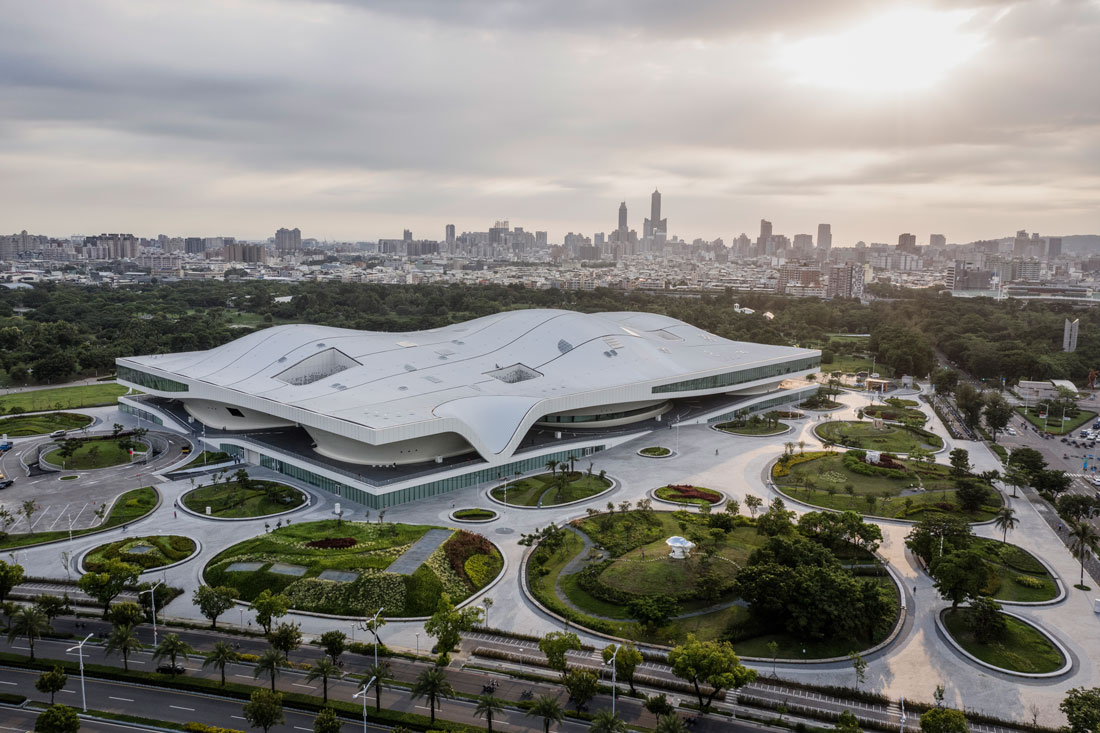 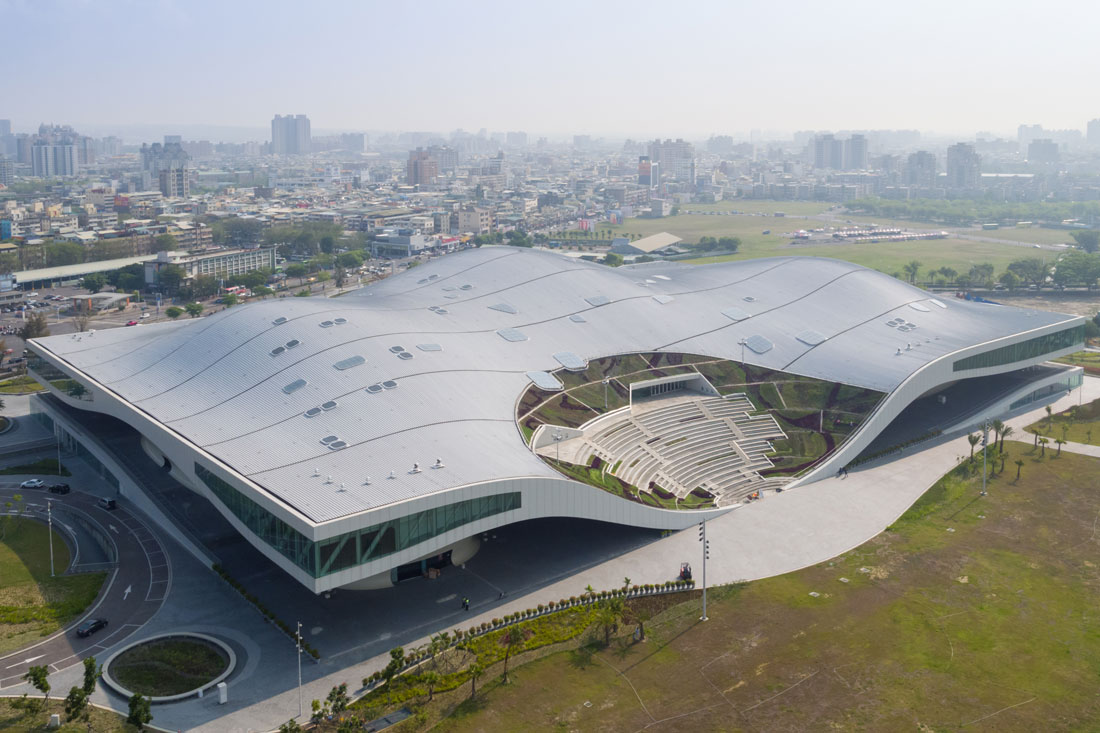 The location for this building is a 65-hectare former military compound in the center of the metropolitan area of Kaohsiung – a place which is intended to become a sort of ‘Central Park’ for the city. When we first visit the site in 2006, it is still a fenced-off zone of military barracks occupied by a lot of wild, barking dogs. It is also dense with banyan trees, their twisting trunks and branches having gradually interlocked over decades. Their aerial shoots grow down into the soil forming additional trunks, spreading over an astonishingly wide area, and the crowns of these trunks become one, like a huge umbrella. According to local legend, Alexander the Great once sheltered his entire army beneath the crown of a single tree. 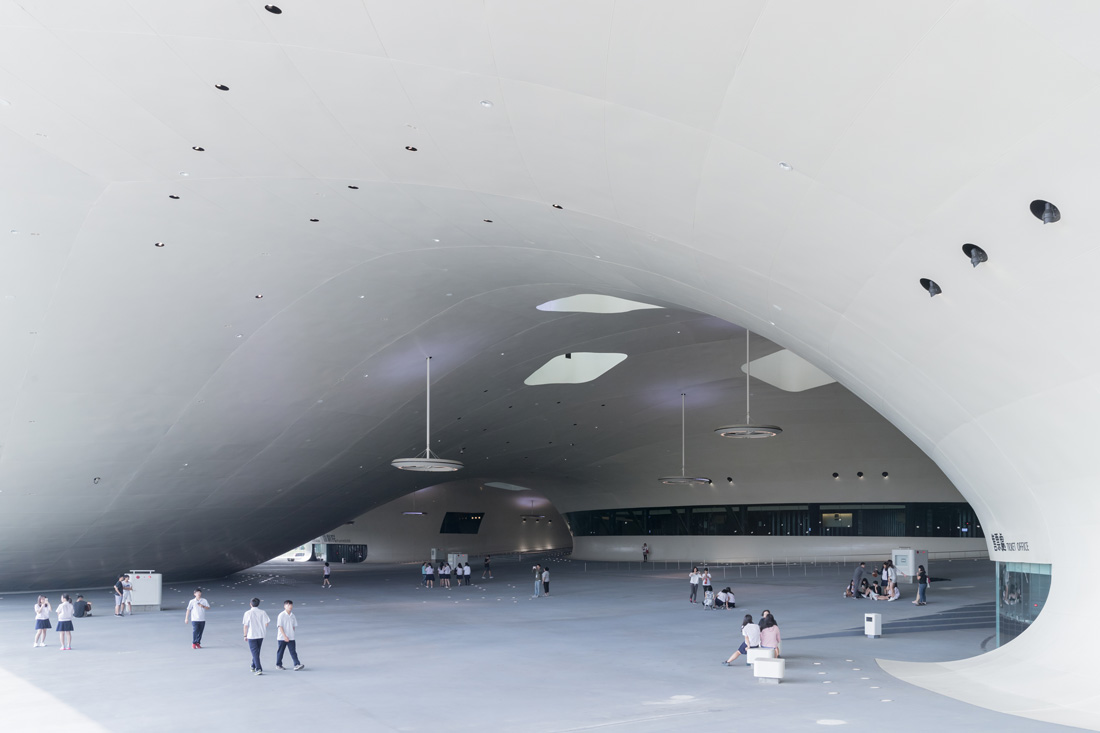 The form of the banyan reflects the local climate. Its wide crown, providing shelter against the sun and rain, is a perfect expression of Kaohsiung’s humid atmosphere. In the sub-tropics, the sun sets at around six or seven o’clock and, just as it disappears beneath the horizon, the city comes to life. During these twilight hours as the temperature cools, people stroll the streets, shop for their groceries, and eat outside. Under the canopies, as well as under the trees, informal performances occur: people dance, play music, perform plays, or practice Tai Chi. What we see, hear, feel, taste and smell on this first trip to Taiwan inspires us to somehow harness this unique urban atmosphere. 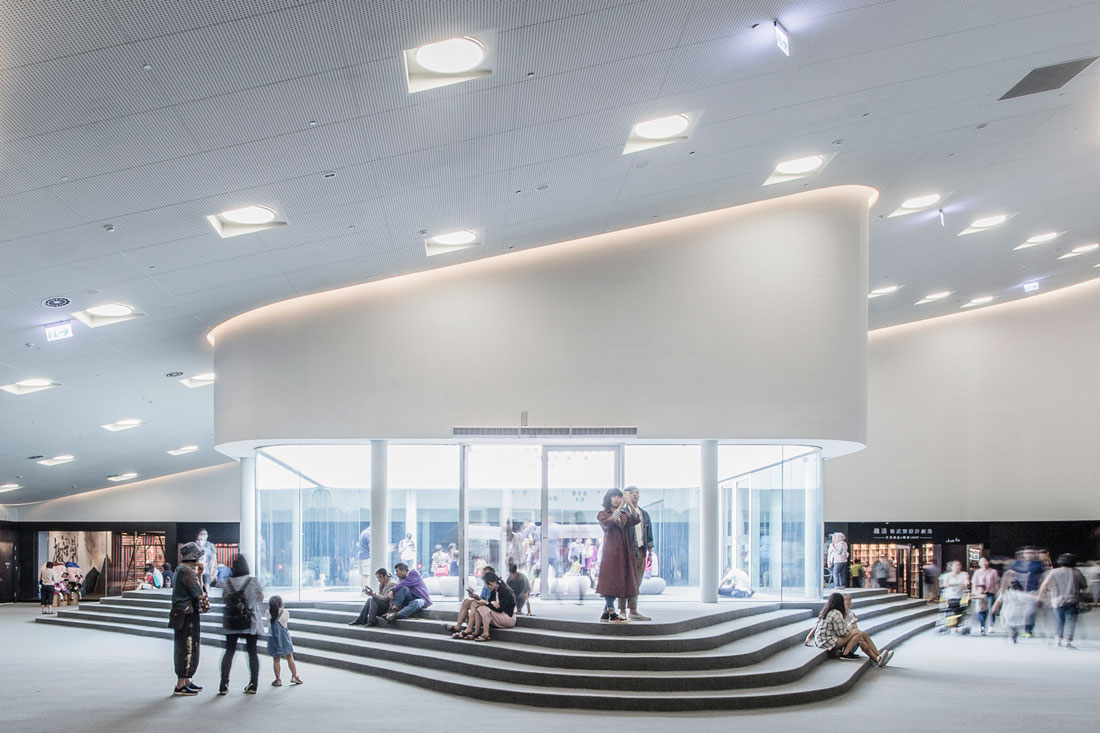 A Continuation of the Park

We wonder whether the banyan tree could help us to create a combination of formal and informal performance spaces. In this way, the building would be full of life around the clock; a natural continuation of the park. We know that good public buildings need good public spaces, a mantra that is central to our approach to civic architecture: think of the Library of Birmingham’s sunken amphitheater, or La Llotja de Lleida’s urban stage beneath a cantilever, using the stairs of an adjacent building as audience seating. The formal qualities of these three buildings are very different, but they have one thing in common: they are a perfect match with their respective locations, cultures and climates. 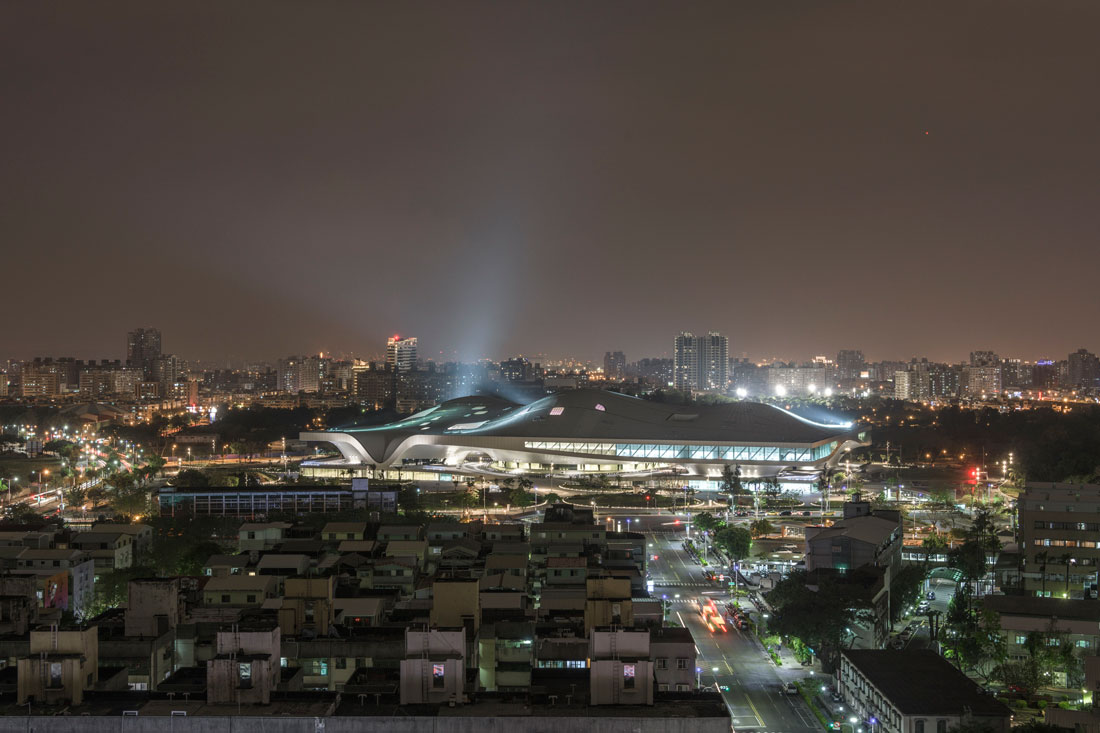 The open, protective shape of the banyan tree becomes a springboard for the design. Its expansive sheltered crown becomes the Banyan Plaza, a partially enclosed public space where the cooling wind can freely flow. Between the four formal performance halls, which form the ‘trunks’ that support the undulating roof, a topography rising from ground level to plus five meters becomes part of the park’s landscape. Where the roof touches the earth, the building becomes an amphitheater, open towards the surrounding parkland which, in turn, becomes both its stage and its set. 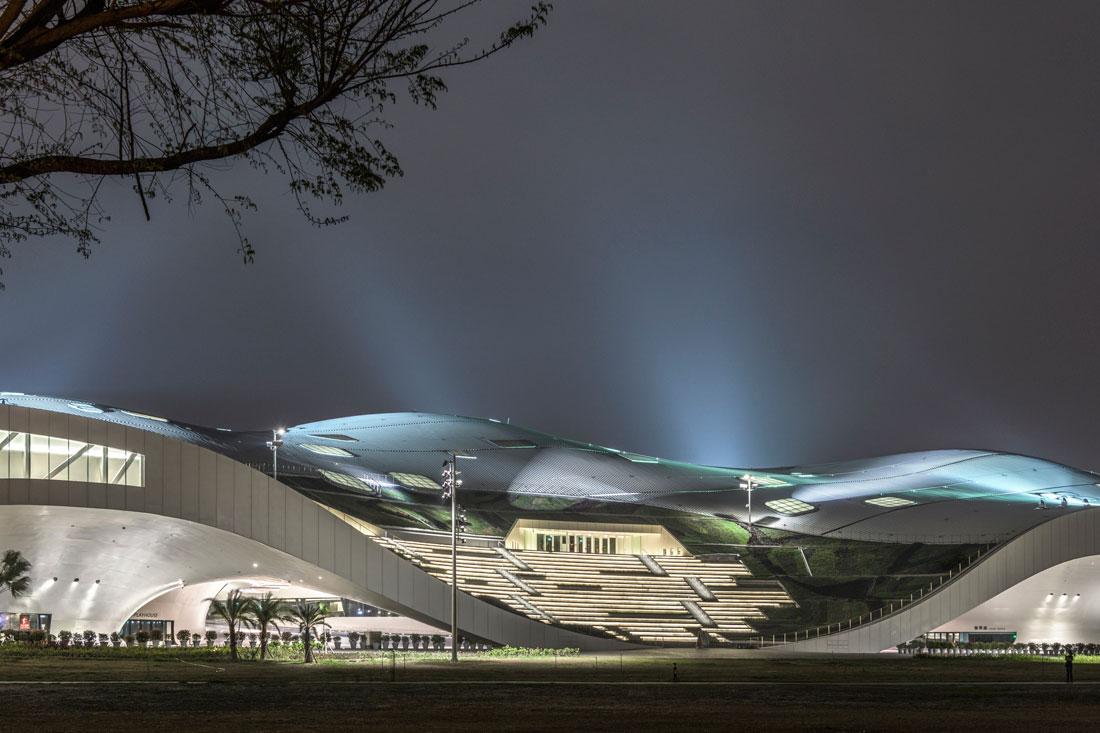 Each performance venue and foyer have its own unique atmosphere and together create one fluidly connected space. The walls and continuous ceiling surface of the Banyan Plaza is a neutral white, allowing for artificial light and projections to alter the mood. With 12 chandeliers suspended against the billowing form of the plaza; the building can really dress up for the night! But a question remains: how do you materialize a space the size of a cargo ship, almost 160 meters wide and 225 meters long? Should it be clad in stucco, tiles, aluminum, or steel?

A Piece of Banyan

In 2008 we are invited to design a pavilion for the Salone del Mobile in Milan. We decide to build ‘A Piece of Banyan’ – a 1:4 scale model of a sliced fragment, 20 meters long and 3.5 meters wide, to research and test the proposed ceramic tile cladding for the Banyan Plaza. We affix tiles to the model reminiscent of the craquelé of Chinese porcelain and we also test the ambient lighting. The changing colors and atmospheres are spectacular; the tile cladding on the curved façades, on the other hand, is less of a success. For one, it’s raining heavily in Milan, and it is impossible to glue the tiles to the ceiling.

We continue our search for the building’s skin, and the idea arises to use the finely tuned, locally accessible techniques of Kaohsiung’s ship building industry. We convince everyone that the Banyan Plaza should have the detailing of a cargo ship, and not of a luxury yacht. There should be hoist points, for example, so that lights, banners and fabric can be hung. We don’t want to aim for a perfectly smooth façade – we want to employ the ship builders to do what they do best: create a durable, long-lasting skin on a scale that some contractors would be intimidated by. We ultimately want the building to look like a ship on the land. 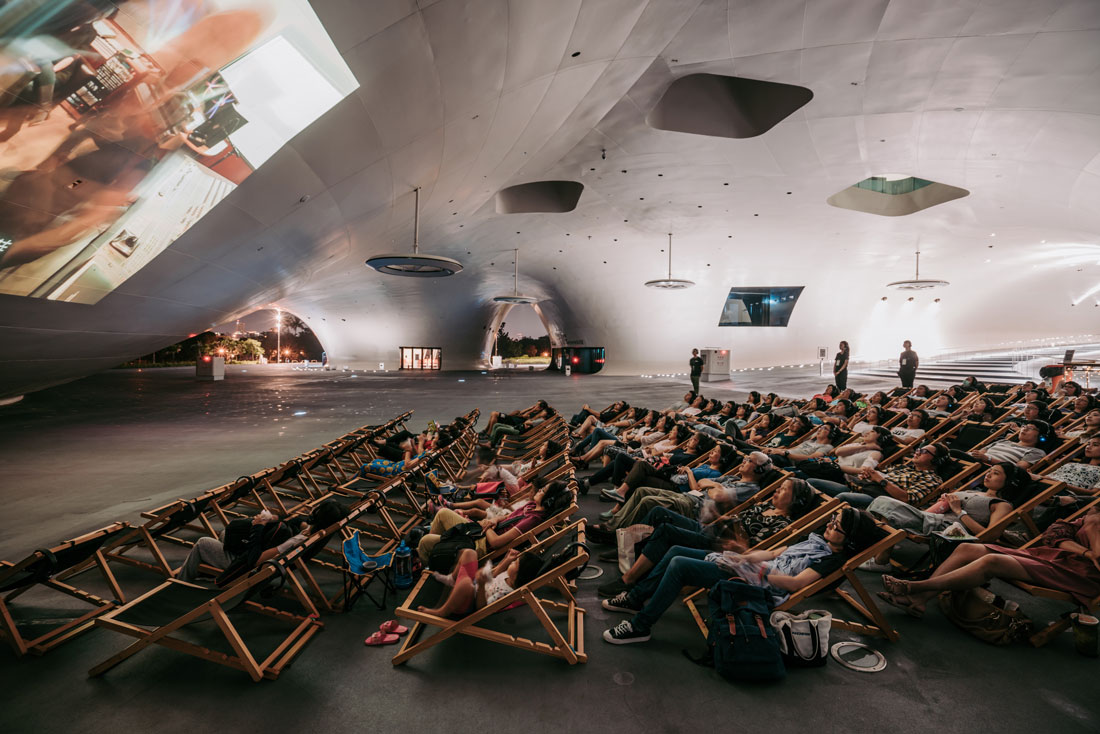 Each of the four performance halls has its own acoustic challenge, and so we collaborate with acoustician Albert Xu. He constructs a 1:10 scale model to test the performance of the most complicated venue: the 1,981-seat Concert Hall. Despite its size, we want the theater to have an intimate feel. Wouldn’t it be great if every member of the audience could see the hands of the pianist? We choose the shape of a stepped vineyard with a stage at its center, so that terraces at different floor heights encircle the podium. With seating on all sides of the stage, the audience is in close proximity to the performance itself. The public enters the oak-lined hall from the ground floor, and spiraling ramps lead them to their golden seats. 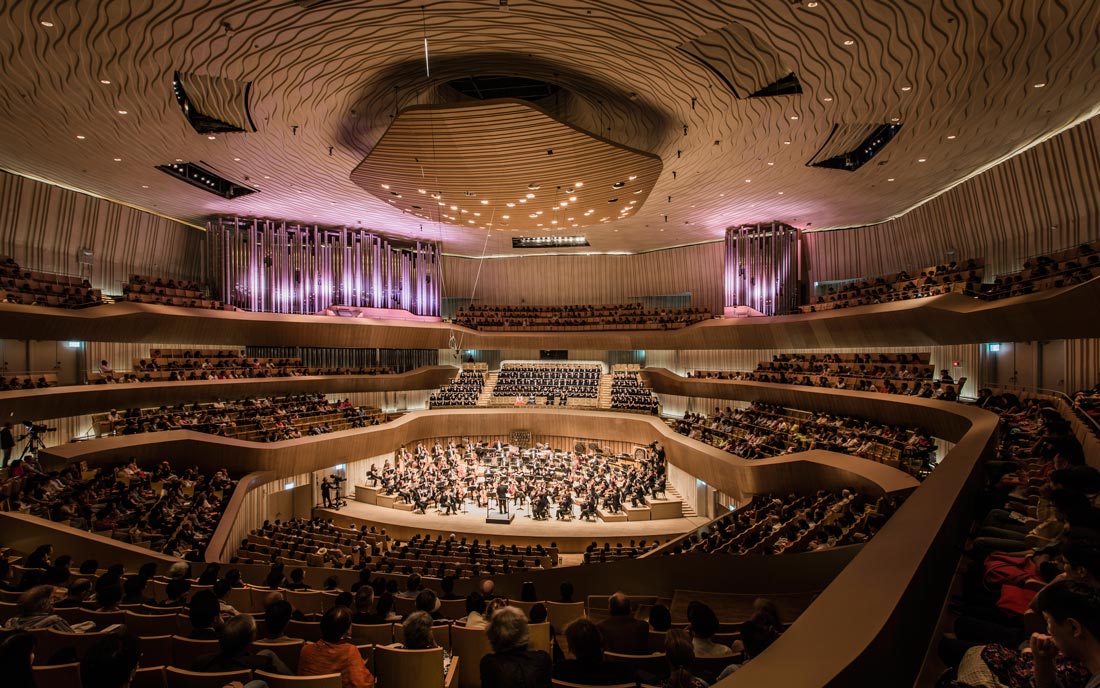 The 2,236-seat Opera House is arranged in the form of a horseshoe with three circled balconies. The seating is upholstered in a mixture of red and purple fabrics with a pattern of Taiwanese flowers, contrasting with the darker walls. This theater is not only suitable for Western opera, with an orchestra of over 70 musicians, but can also be acoustically adapted to accommodate Chinese opera by maneuvering a suspended acoustic canopy.

The Playhouse, with its 1,210 seats in Mecanoo Blue, is designed to host a variety of drama and dance performances. Flexibility is the core element in the design of this multifunctional space. The layout is adaptable and can be changed from a typical proscenium stage, with the audience in front, to a thrust stage with the audience on three sides. 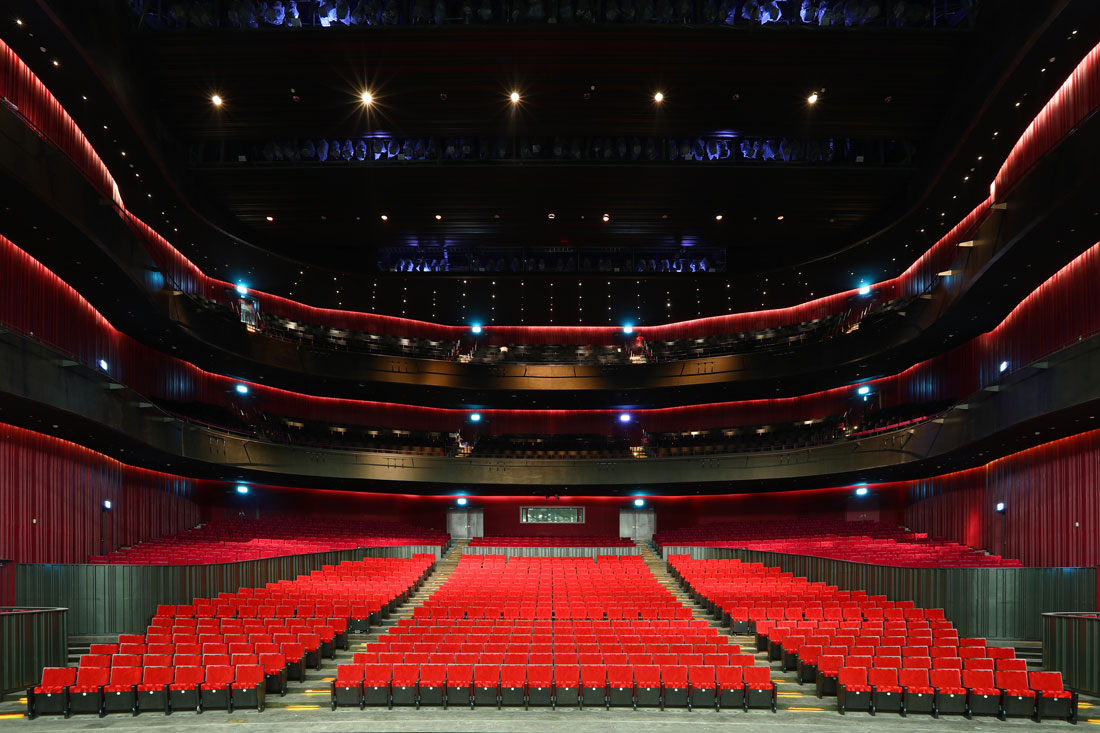 The 434-seat Recital Hall has the most intimate atmosphere of the four. With its asymmetrical composition and seating across two levels, it is designed for chamber music and recital performances. The seats have the same golden fabric as the Concert Hall, and oak lines the walls. The upper part of this hall is enclosed by a circle of sound-asorbing curtains, allowing for the reverberation time within the space to be tuned to specific types of performances. 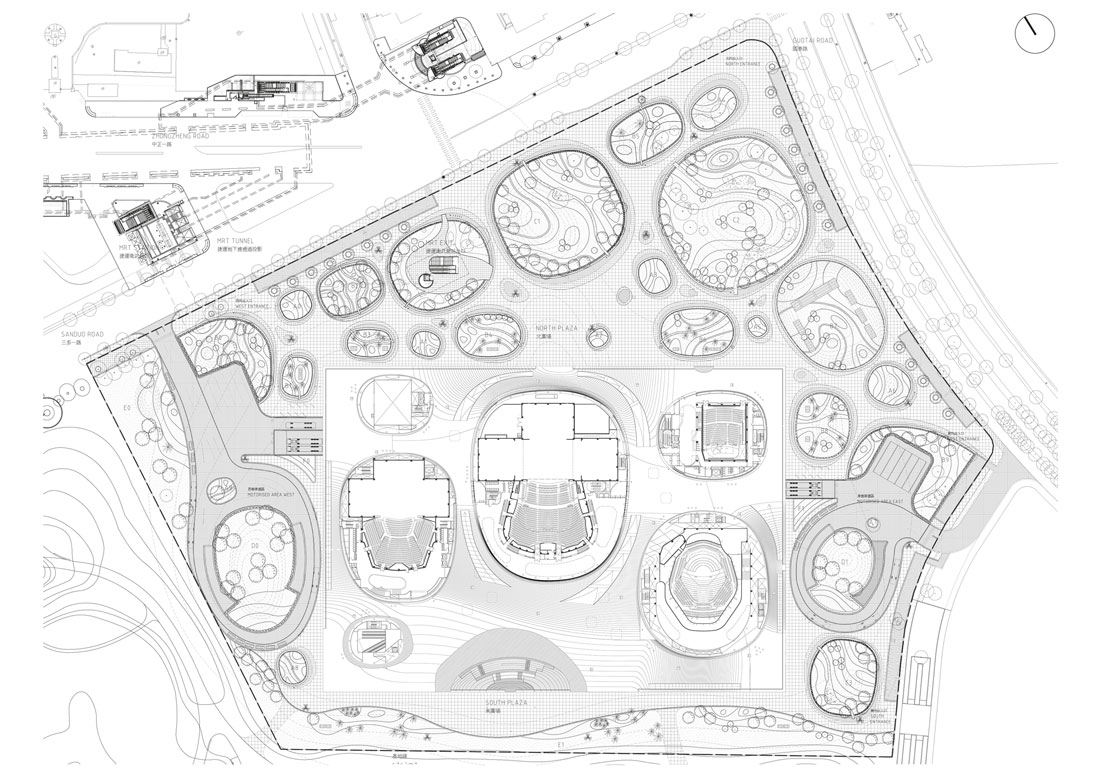 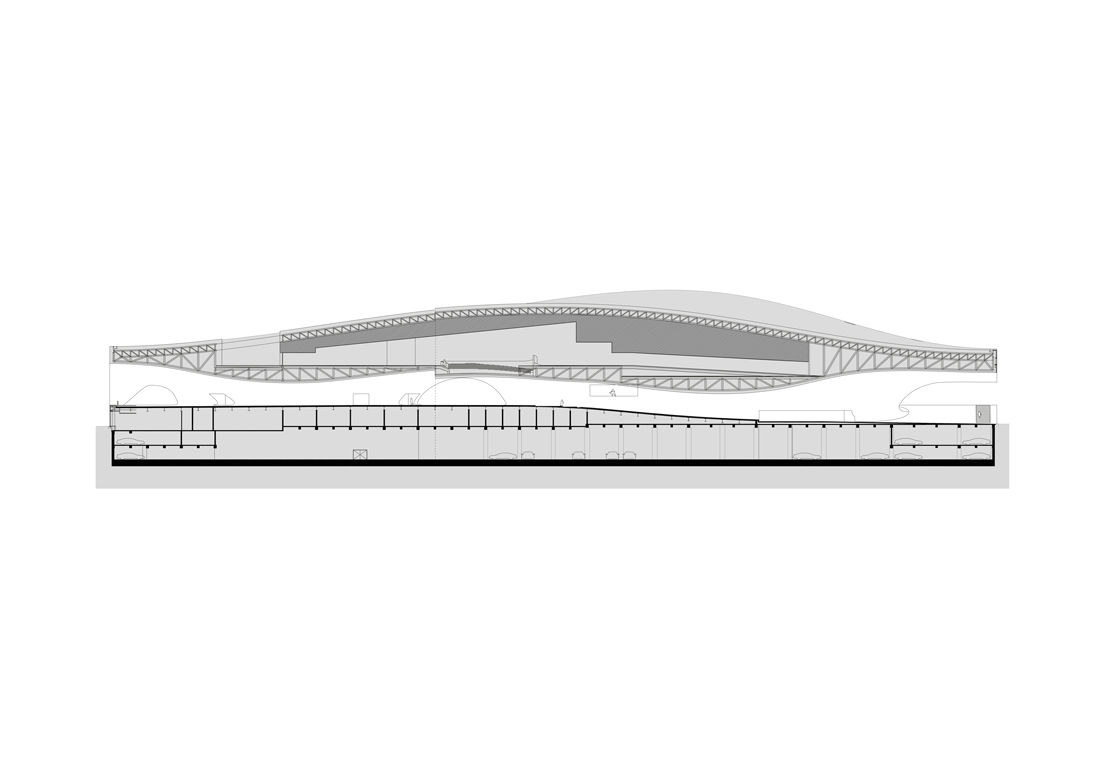 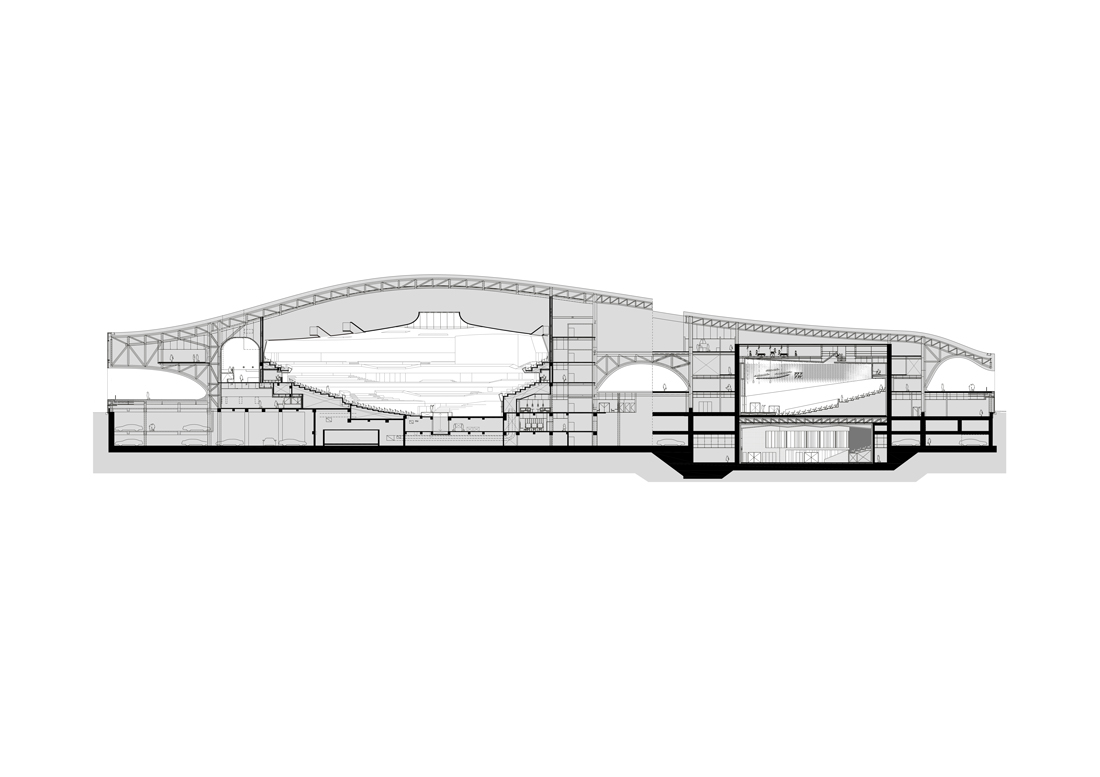 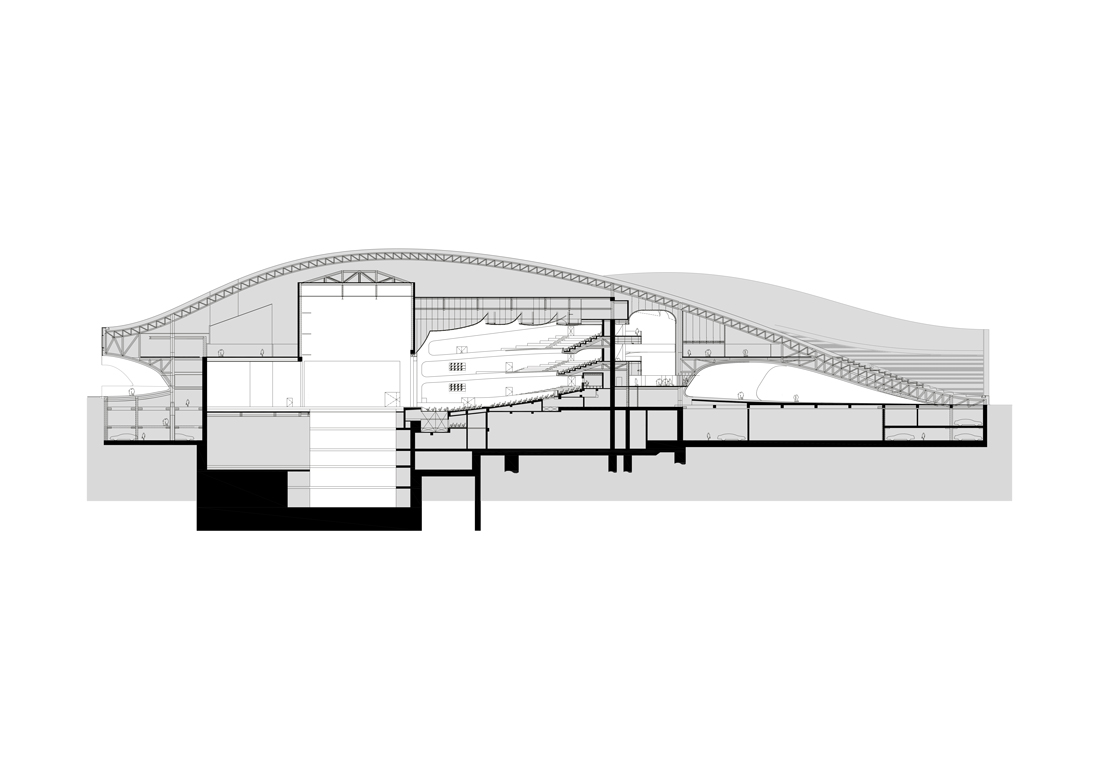