“The closed world includes not just the sealed, claustrophobic spaces metaphorically marking its closure, but the entire surrounding field in which the drama takes place.”[1] – Paul Edwards, 1996

Architects have described spaceport facilities as empty industrial boxes in the American landscape.[2] These are not dull boxes but represent the federal government’s attempt to generate architectural modernity, as space programs relied heavily on strategies for enclosing scientific activities, coordinating logistics, and simulating extraterrestrial environments. Particularly in the postwar era, humanity became obsessed with generating a fully “closed” and synthetically constructed “world in a machine.”[3] The spaceport complex was no different. Traditional practices and our understanding of “landscape” are completely detached when intellectually and critically exploring the evolution of the spaceport complex. Instead, the enclosure of the rocket assembly in the American spaceport demonstrates radical changes and blurry associations between technology and land—from the romantic wilderness (or manicured English gardens) to a series of technical lands exemplifying global power. Assembly, manufacturing, and distribution of rockets all contribute to the enclosure of the space program. Curiously, such activities relied on the construction of the garden—the place of natural history tied to technological power—as transformed from the wilderness “out there” to a garden enclosed in the machine. And therefore, the notion of landscape and garden are defined and appropriated into an image of a nation in Cold War politics. 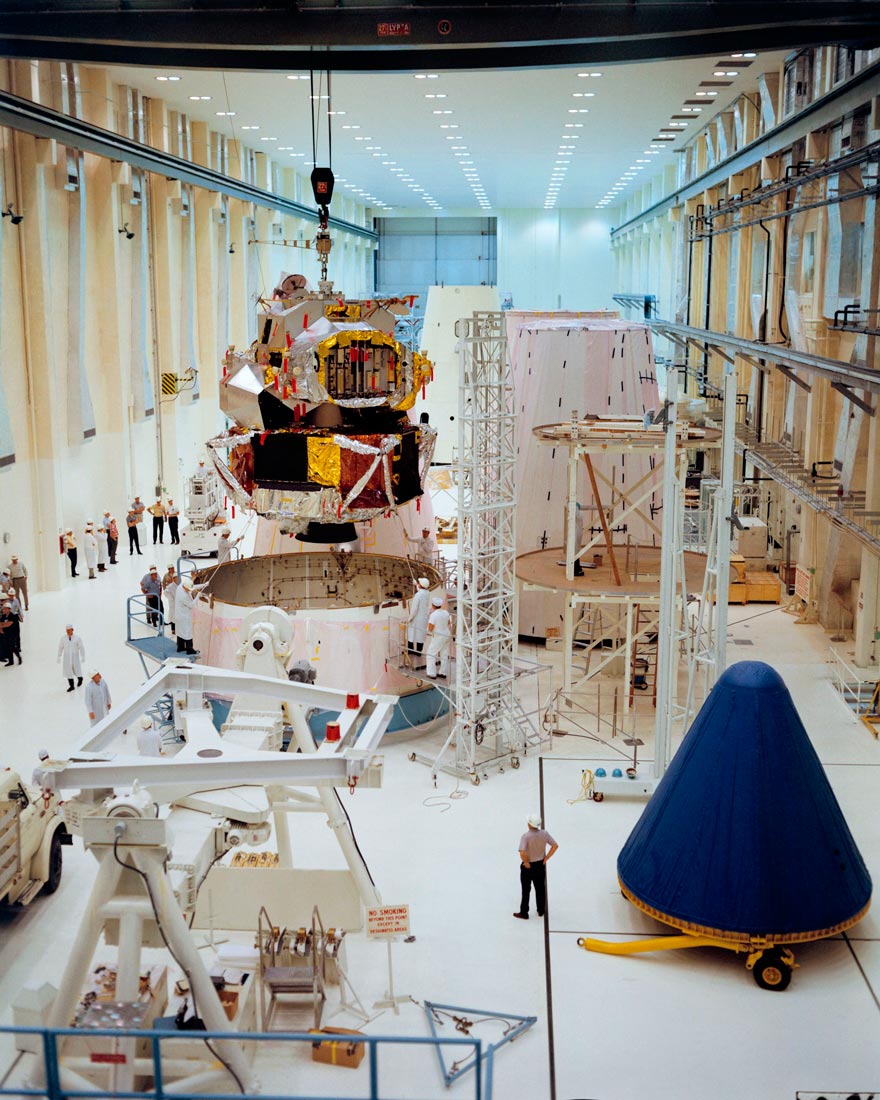 [1] Paul Edwards, The Closed World: Computers and the Politics of Discourse in Cold War America (Cambridge: MIT Press, 1996), 13. [2] Reyner Banham, Megastructure: Urban Futures of the Recent Past (London: Thames & Hudson, 1976). [3] Paul Edwards, The Closed World: Computers and the Politics of Discourse in Cold War America (Cambridge: MIT Press, 1996), 1-12. As compared to Norbert Wiener’s antiaircraft predictor machines, or the “centralized computer control” of military weaponry and strategic systems pointed out by Paul Edwards, it seems the cyborg dichotomous boundaries are further stripped from the nature of closed-world meta-structures in the world. Edwards declares, “the key theme of closed-world discourse was global surveillance and control through high-technology military power.” He continues by suggesting the closed world under the Truman doctrine focused on the “secretive communist society” (containment metaphor), was “self-containment to maintain its integrity,” and that the “global stage as a whole was a closed world.” Such practices, argued by Edwards, intimately linked “metaphors, beliefs, and ideologies to practices, policies, and technologies of the Cold War.” [4] David E. Nye, American Technological Sublime (Cambridge: MIT Press, 1994). [5] Leo Marx, Machine in the Garden. Technology and the Pastoral Ideal in America (New York: Oxford University Press, 1964). [6] Thomas Hughes, Human-Built World: How to Think about Technology and Culture (Chicago: University of Chicago Press, 2003), 128-131. Hughes describes American painter Charles Sheeler’s work from the 1930s as one who replaces the traditional landscape with the technological one. Hughes points out Sheeler was well known as having a “passionate response to the machine sublime.” It is no coincidence that American culture by the early 1960s became fully absorbed into the machine’s aesthetic, especially at the illustrious scale of the rocket. [7] Much like those we see during spacecraft rendezvous and docking sequences in outer space. [8] Henri Lefevre, Production of Space, 234. [9] Norman Mailer, Of a Fire on the Moon (Boston: Little, Brown and Company, 1969). [10] See Perry Miller, Nature’s Nation (Cambridge: Harvard University Press, 1967). [11] As described in NASA’s public material regarding its JSC tram tour. [12] See Fred Scharmen; see also Felicity Scott (2016), “Securing Adjustable Climate,” in James Graham (ed.), Climates: Architecture and the Planetary Imaginary, New York and Zurich: Columbia Books on Architecture and the City and Lars Müller Publishers. Approximately 15 years later, in 1975, six years after landing on the moon, NASA’s Ames Research Center proposed a torus-shaped space colony. Including the typical suburban artifacts from American living, the Toroidal Space Colony project—directed by Princeton University physicist Gerard O’Neill—was funded through NASA’s Ames Research Center. Rendered as “suburbia in space”, the proposal included single-family residences and agricultural plots enclosed by a tubular shell regulating an artificial atmosphere for life and plant growth. The space station and settlement buildings were rendered with the same suburban typologies you would find on Earth—evidence of a disconnect between megastructure and the enclosure fixed to old suburban artifacts.