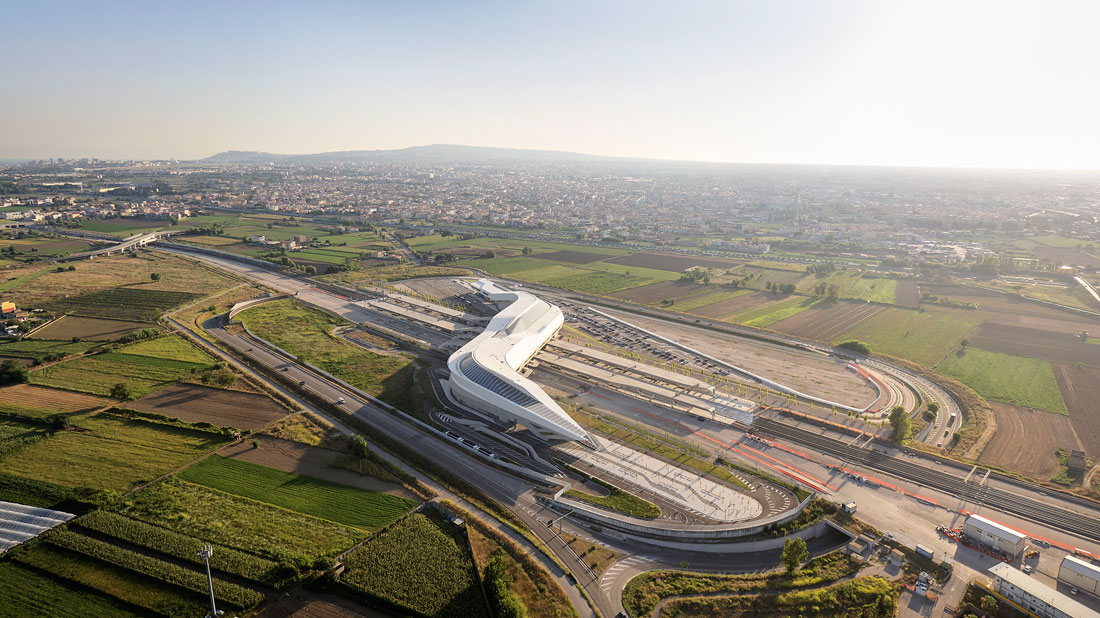 In addition to the planned high-speed rail services connecting Bari and Reggio Calabria with the north of Italy and Europe, by 2022 new rail infrastructure will create an important hub at Napoli Afragola serving the entire Campania region by integrating the southern expansion of Italy’s high-speed rail network with the Napoli Cancello line and the Circumvesuviana commuter railway extension. 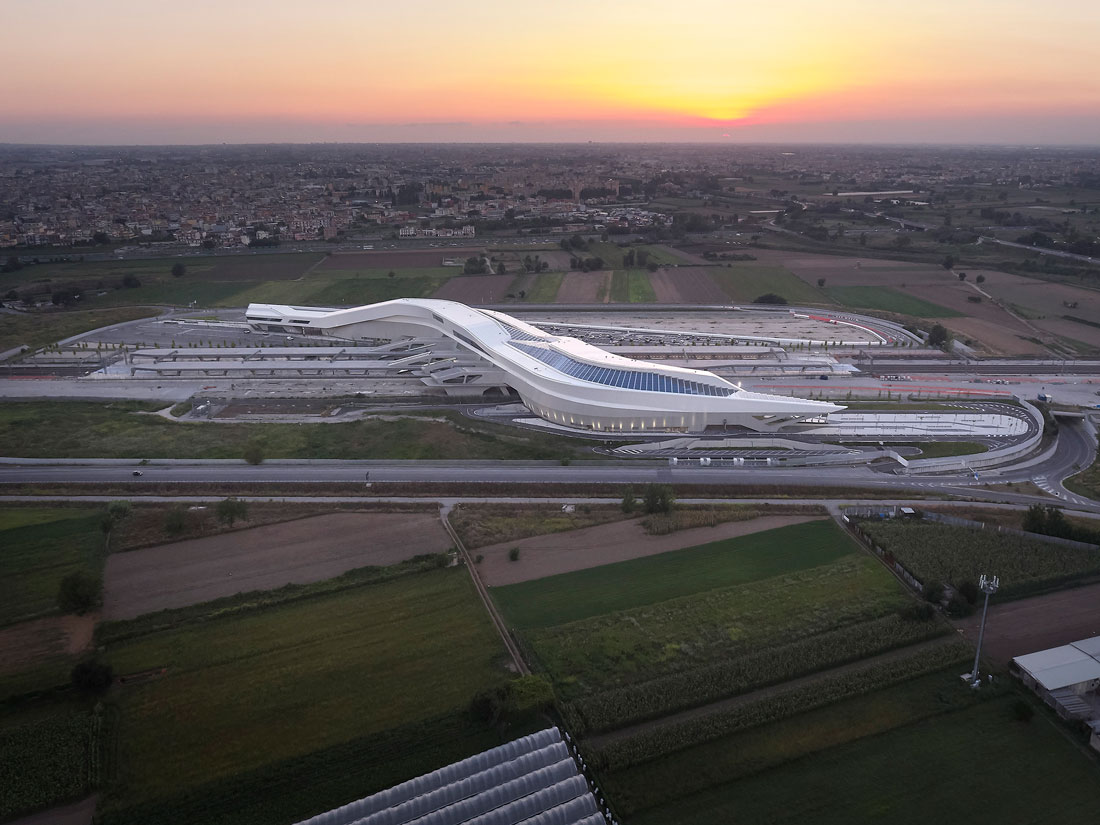 Located at this major intersection, Napoli Afragola connects the 15 million residents of Campania, Puglia, Molise, Calabria and Sicily in southern Italy with the national rail network in the north and the rest of Europe. It also enables goods and passengers from Europe and northern Italy to access the southern ports of Gioia Tauro, Taranto, Bari, Brindisi, Palermo and Augusta. 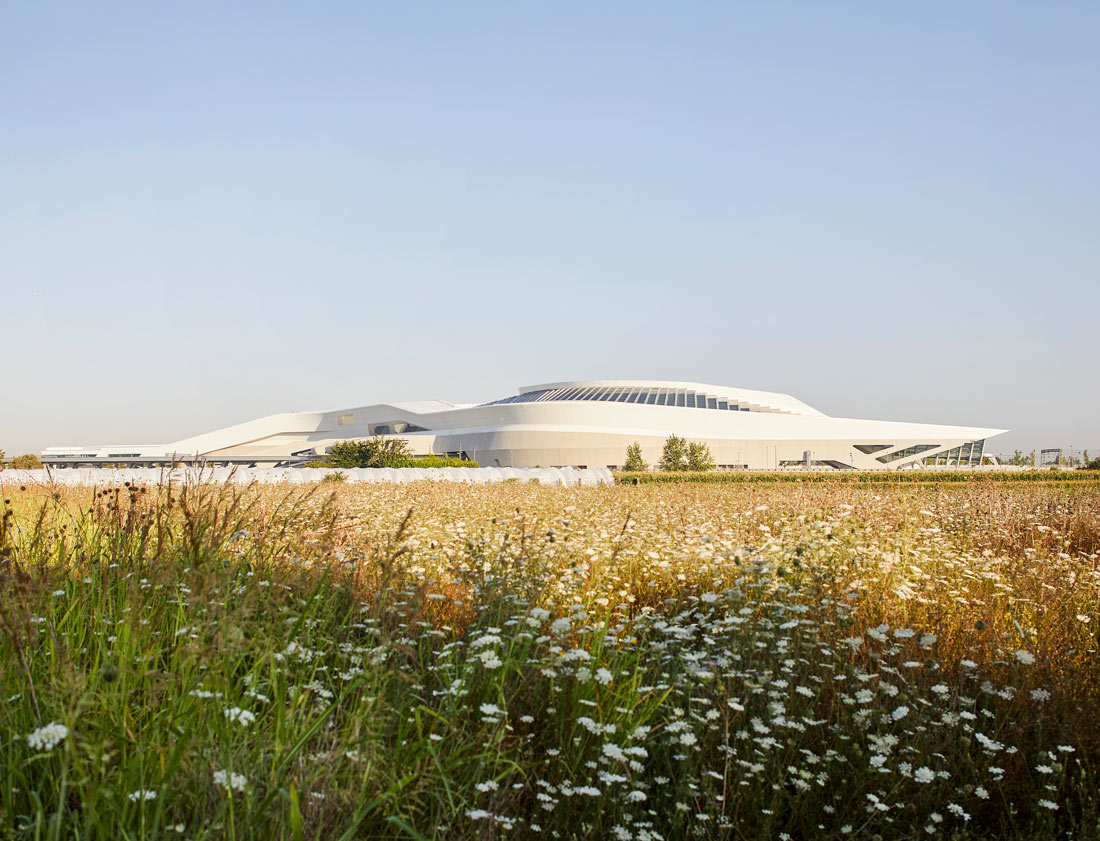 To meet future demand for rail travel throughout the region (which has increased by 50% in the past decade) the Napoli Afragola station is part of the new north/south rail corridor to the east of the greater Napoli metropolitan area, which will be wholly integrated with local and regional rail services.

Once all lines are operational, 32,700 passengers are expected to use the station every day (approximately 12 million passengers per year) with 4,800 commuters using the station each morning and evening during rush hour. Twenty-eight high-speed trains serving each direction will stop at Napoli Afragola daily, providing an express service in each direction every 30 minutes (40 minutes outside peak times), with approximately 700 passengers planned to alight or board from each platform. A further 200 regional and local train services will call at Napoli Afragola daily, creating a key interchange within the national, regional and local rail networks. 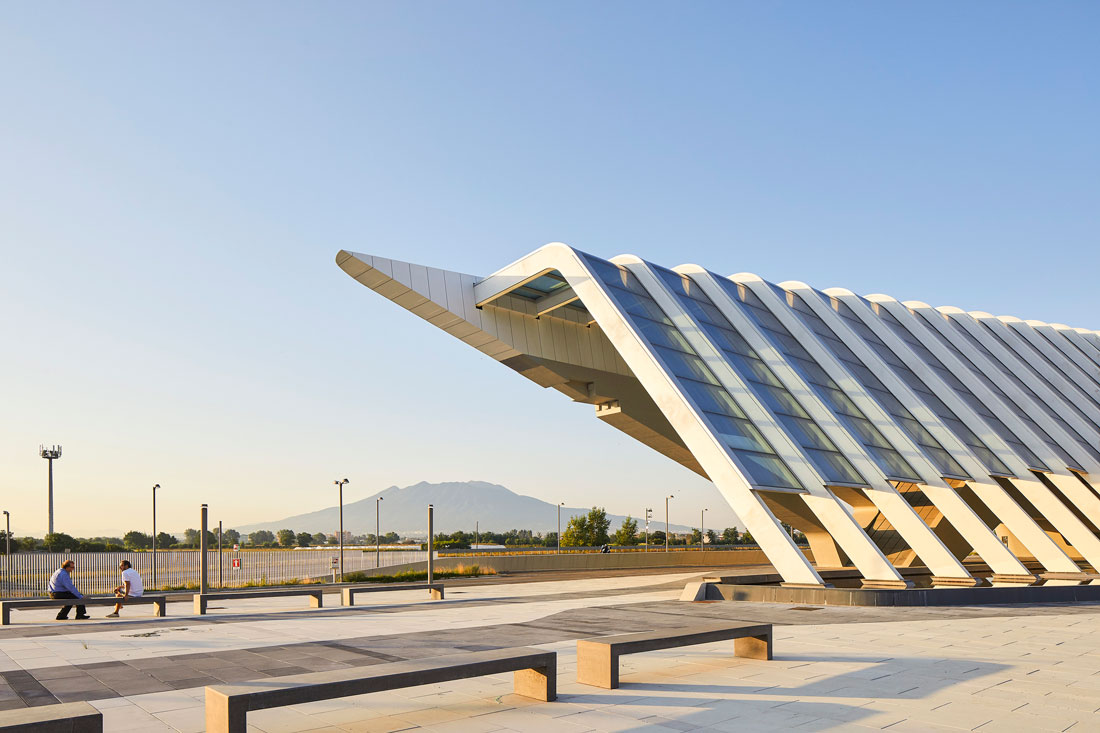 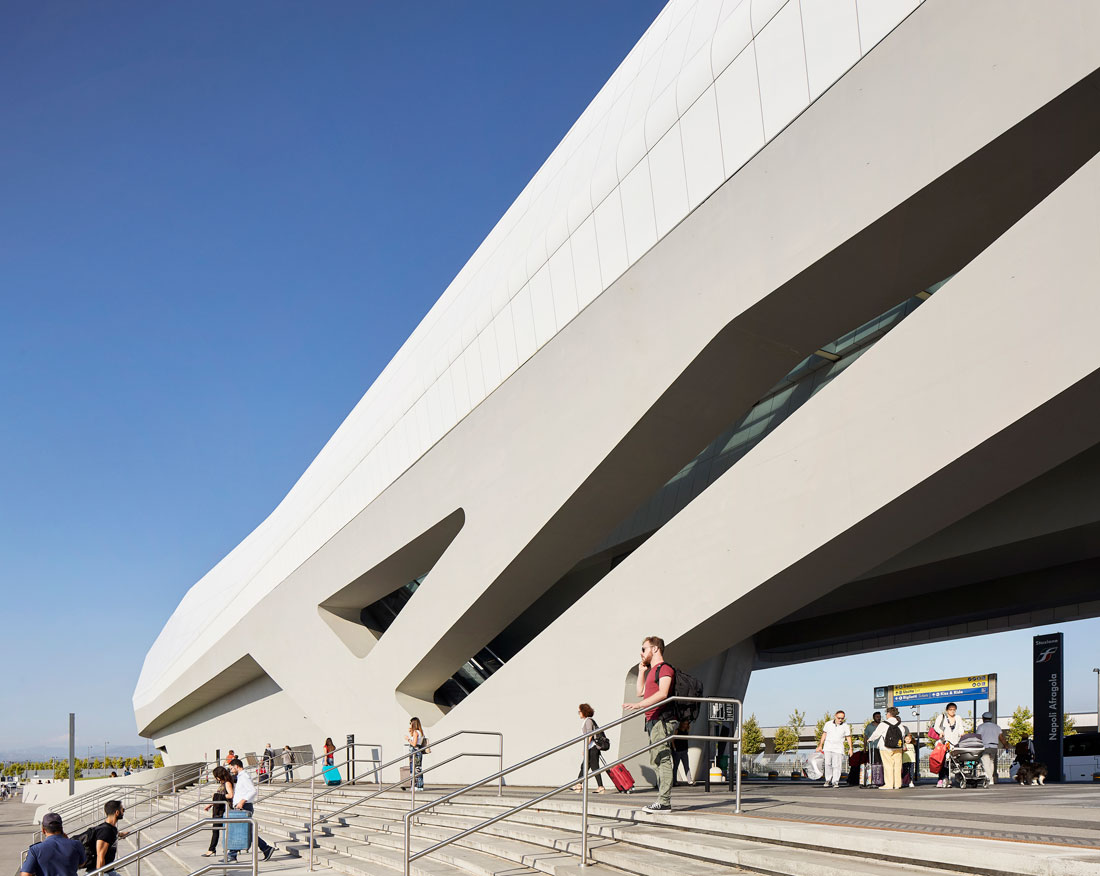 Located 12 km north of Naples, Afragola station is also planned to serve the local communities of Acerra, Afragola, Caivano, Casalnuovo di Napoli and Casoria, which range in population from 10,000 to 50,000 residents. Afragola will be an intermodal hub, relieving congestion in the city centre, and not a replacement for the existing Napoli Centrale terminus. 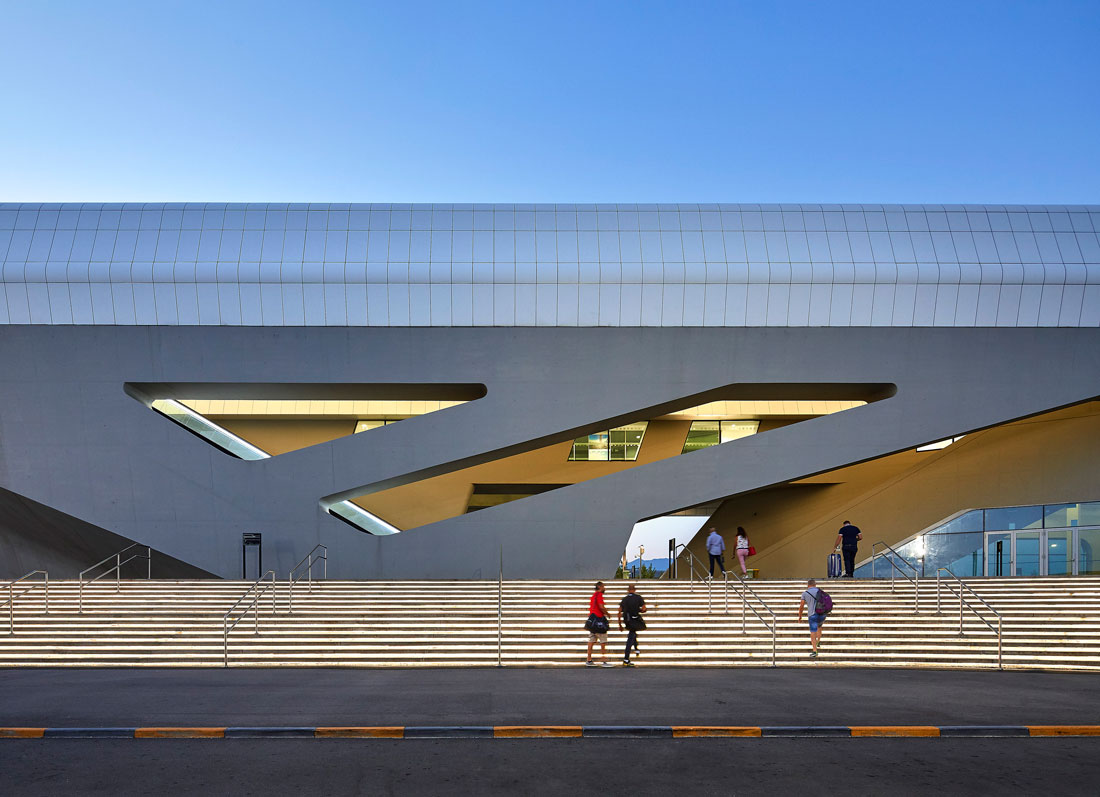 Designed as an urbanised public bridge connecting the communities on either side of the railway, the station is defined by the circulation routes of passengers, minimising distances for those embarking and alighting at Napoli Afragola as well those passengers connecting to different train services.

The design enlarges the public walkway over the eight railway tracks to such a degree that this walkway becomes the station’s main passenger concourse: a bridge housing all the services and facilities for departing, arriving and connecting passengers, with direct access to all platforms below. 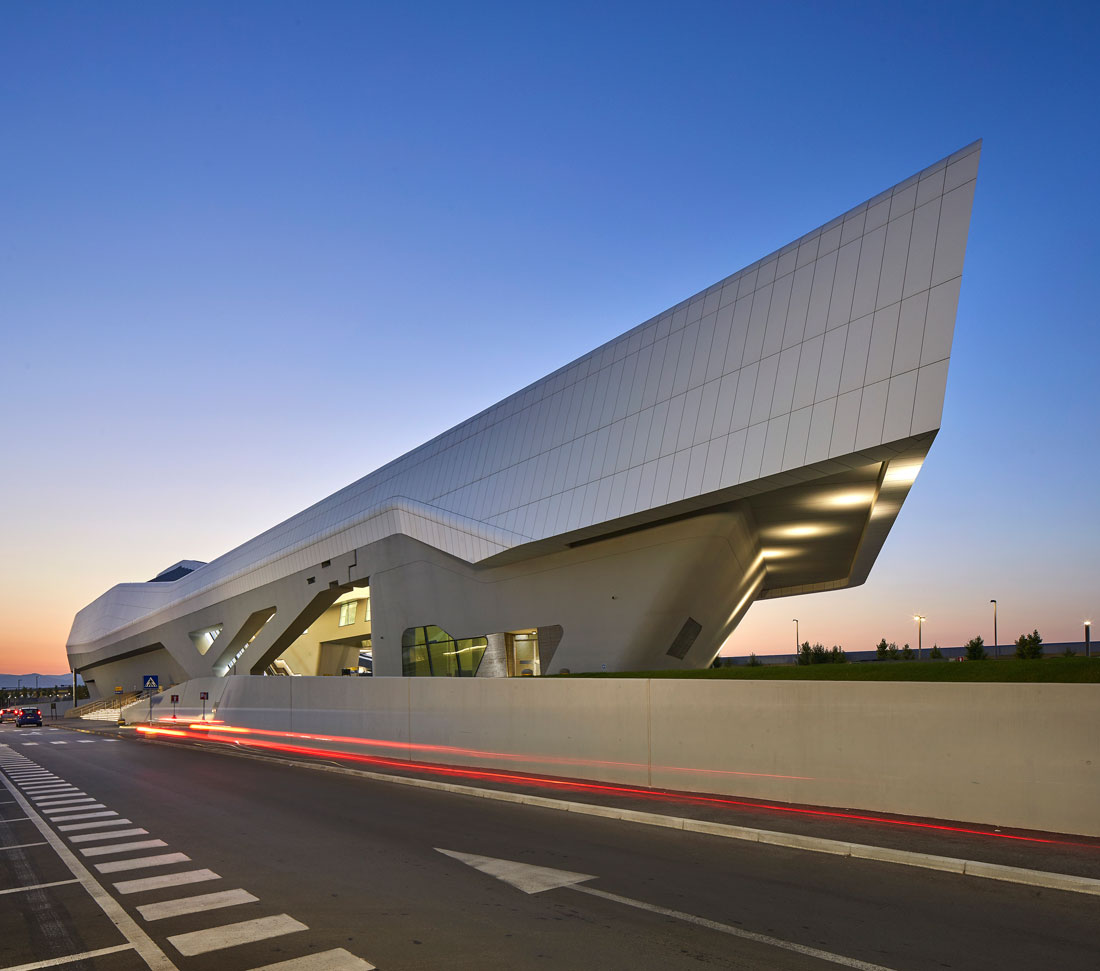 The paths of passengers have also determined the geometry of the spaces within. Large entrances at both ends of the station welcome and guide visitors up to the elevated public zones lined with shops and other amenities. Visitors from either side of the station meet in a central atrium overlooked by cafes and restaurants. This central atrium above the railway tracks is a much-needed new public space for Afragola and the main concourse where rail passengers descend to the platforms.

The station was designed as a reinforced concrete base supporting the elevated concourse of steel ribs, with a glazed roof. Construction began in 2015. 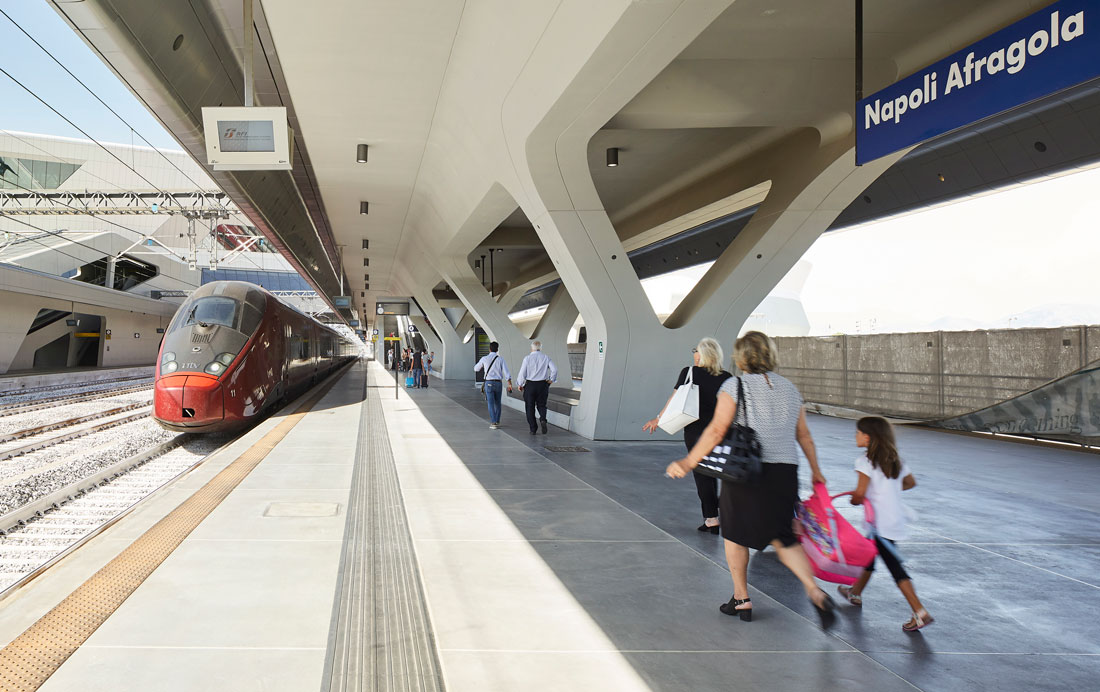 The concrete used within the station is a specific composition that provides optimum performance, with curved structural concrete elements built using technologies initially developed for the construction of the MAXXI Museum in Rome: its wooden formwork replaced by prefabricated steel units, and double-curves realised with formwork created from CNC milled polystyrene models. 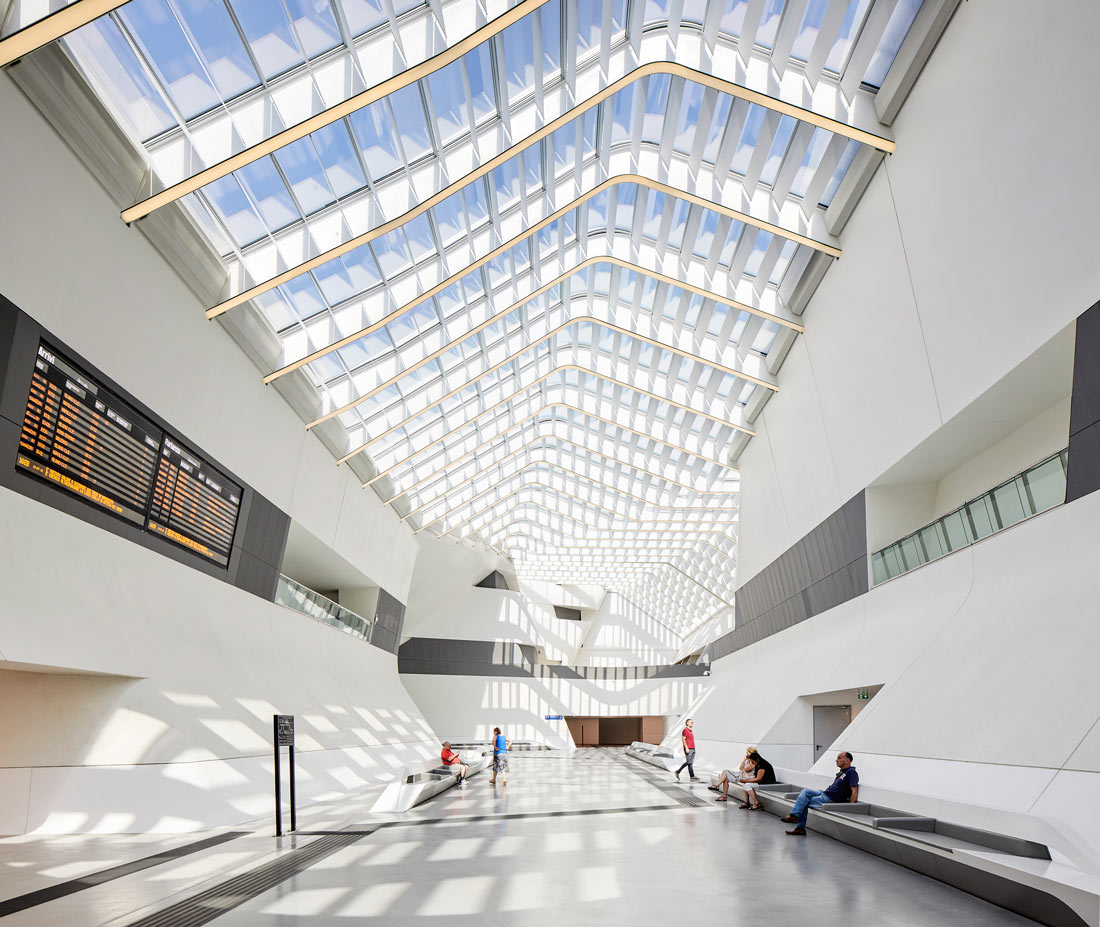 Designed as the extrusion of a trapezoid along a 450m curved path, the elevated concourse is made of 200 differently shaped steel ribs that are clad in Corian®.

The main concourse of the station is oriented to benefit the building’s ecological sustainability. Integrated solar panels in the roof, combined with natural light and ventilation as well as ground source cooling/heating systems, will enable the station to minimise energy consumption. 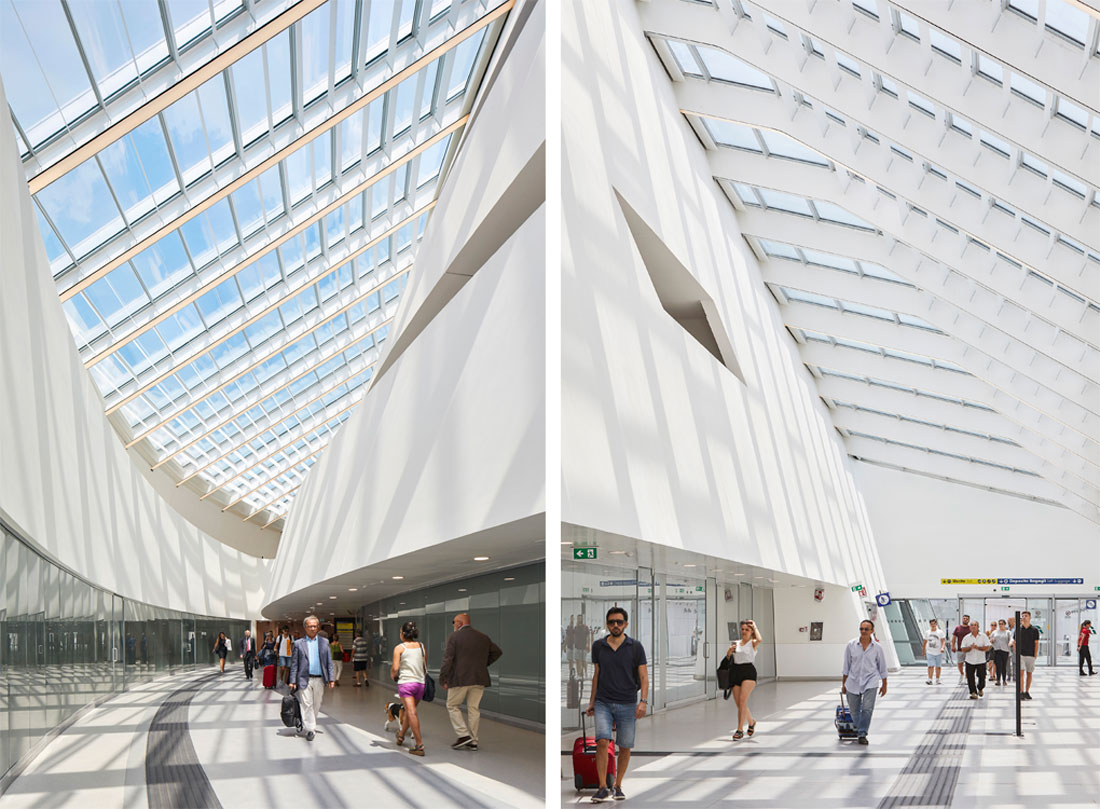 “This extraordinary station is the work of a great architect and of enormous strategic value,” explained Gioia Ghezzi president of Ferrovie dello Stato, Italian state railways. “We wanted to build a station that is not only for transit but which, over time, will be a source of renewal for the south, creating jobs and growth.”

“Any great country needs great projects that are a leap forward,” said Italian prime minister Paolo Gentiloni. “The new station at Afragola is the foundation of the infrastructure program that promotes economic development in the south.”

“We have allocated €47 billion over 12 years and the vast majority of this investment is for new rail infrastructure, which will contribute to sustained growth in southern Italy,” continued prime minister Gentiloni. “With this inauguration, we send a message that Italy is moving, the country is growing. Here is a wonderful combination of artistic and engineering expertise.”

« Central Axis of the Multimodal Hub in Nice Grand Arénas
The Next Frontier: The Houston Spaceport »