This is the second in a series of articles which explores the complexities of moving in Nairobi through the eyes of four commuters as they walk, ride motorcycles (boda boda), take buses (matatu), and hire Ubers from the wealthy neighborhoods adjacent to the United Nations to the low-income communities in the city center. Three and a half million people move through this East African capital every day, and the lack of coordinated transportation planning often causes the city to grind to a halt. Our second story is about Kevin Karani, the conductor of the famous Mad Cow matatu.

There is order behind the chaos of matatus, Nairobi’s famous 12-30 person commuter buses, and it is established by the matatu conductor. Kevin Karani is one of these conductors, and his job is daunting: through the peak hours of traffic, conductors facilitate boarding procedures in order to make sure that their matatus leave with no empty seats on board.

Kevin convinces passengers to board his matatu with his quick wit and advertising the best music DJ in town. He’s known for telling jokes and making quips as his passengers board the bus. Kevin quickly negotiates a cost of 80 Kenyan Shillings as he guides people on board. The process of negotiating fares and convincing passengers to join your matatu is called touting and the better you are at it the more money you make – Kevin is one of the best touts. 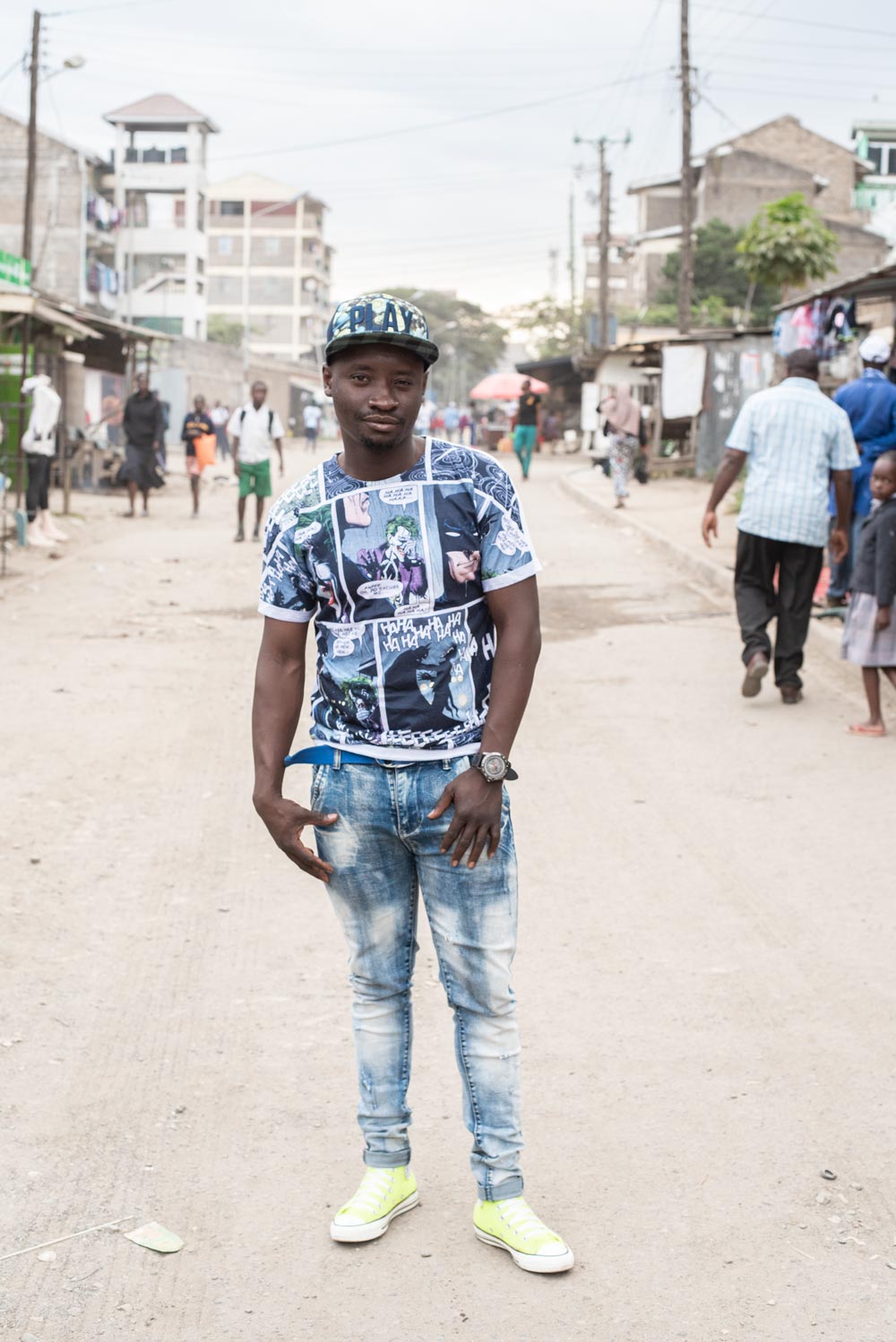 During peak hours, matatus operate as an express service with one pick-up point and one drop-off point. In off-peak hours, they will often make multiple stops before their final destinations. It is the conductor’s job to advertise these drop-off points and to fill every seat as quickly as possible to ensure an on-time departure. Often, many matatus will serve the same route, so competition for passengers is stiff. To vie for attention, conductors and drivers will often adorn their buses with colorful decorations and amenities, like monitors, fans and music.

Kevin’s Mad Cow matatu is painted like a cow, with fun riddles printed on the side such as “Only milk and juice come in 2 liters,” and “Milk ATM.” The painted matatu matches Kevin’s exuberance and attracts customers to its service. Plus, these extra touches mean they can charge a bit more for their service. 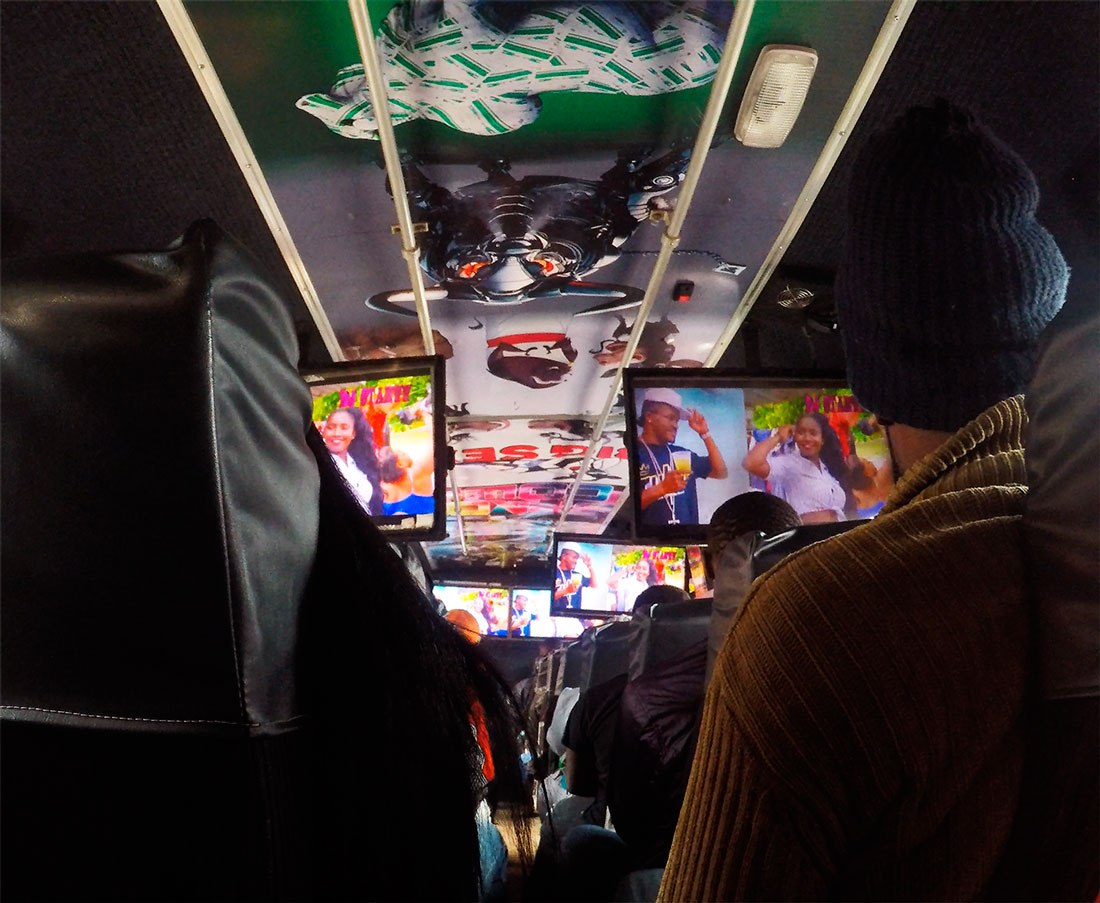 Most matatus will have their own versions of this vibrant display. Some are decorated according to a theme, like the Mad Cow; others are bedecked in graffiti by local artists and play the music of new up-and-coming musicians through their speakers. For this reason, they are a central and adored part of Nairobian life and a vital thread in the cultural fabric of the city. Matatus are the common ground, the shared lived experience of millions of Kenyans.

The government has occasionally moved to restrict matatus, by either regulating where they can drop off passengers or by ordering that they lower the volume of music they play, but it’s unlikely that these buses will be restricted. Too many people rely on their service, and there is an active community that protects the creative capacity of these buses as outlets and advertisements for young artists. 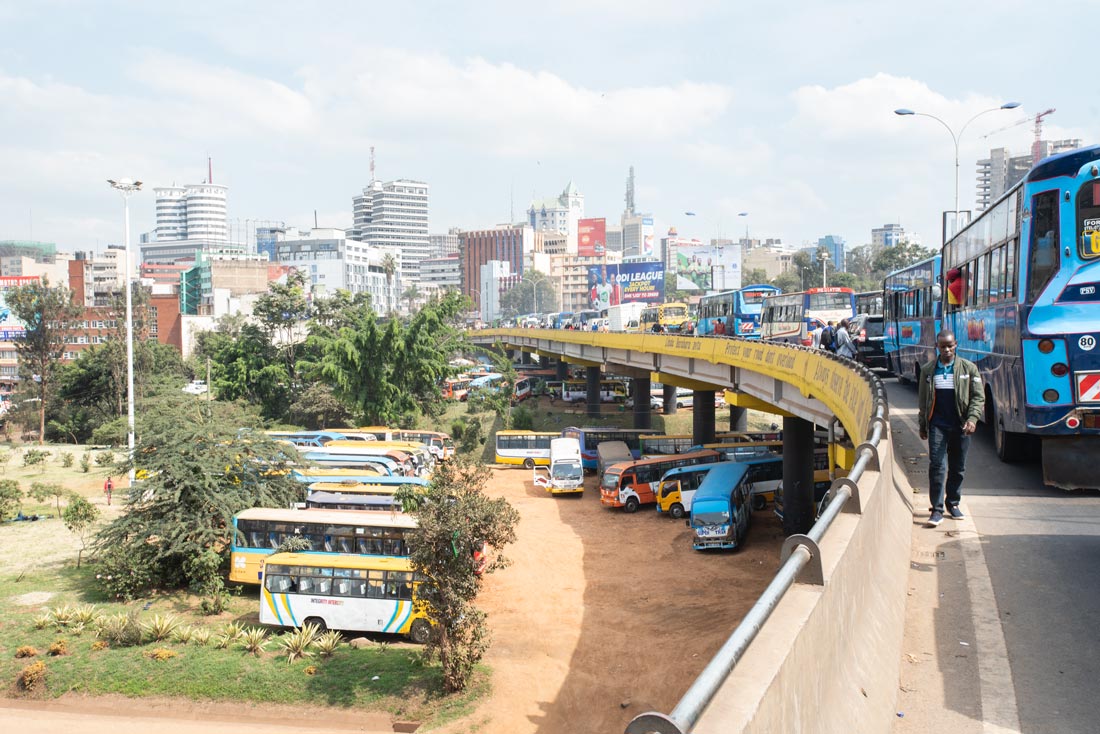 It’s partially this lack of regulation and oversight, though, that makes the matatu business so tough. The industry is entirely based on the premise of fluctuating fares. Matatu owners will set a daily expected profit, and any additional profit over that amount is divided between the conductor and the driver. Kevin and Steve, the driver, are therefore incentivized to set prices high and make sure the bus is always full. This also means that prices can fluctuate based on weather and traffic: on rainy days, for example, the cost can be significantly higher. These fluctuations make it hard for commuters to budget their daily travel costs. Kenyan Bus Services, one of the biggest Matatu companies (also known as Sacco’s) has been advocating for set fares for rides, but for now this privatized system can set the fares based on need. Nairobi’s low-income residents often choose to walk rather than ride matatus: with high and ever-increasing fares, only 32% of low-income Nairobians can afford riding a matatu regularly. As a conductor, Kevin helps in making the process efficient, but commuting via matatu does not save the passengers from the ferocious Nairobi morning traffic.