This project aspires to serve as a new model for media libraries. The programme calls into question the functions of a media library, lending it the content of a ‘third place’ – a place where members of the public become actors in their own condition, a place for creation as well as reception. In association with the basic programme, the building includes areas for displays, creation, music studios, and a café-restaurant. The various activities in the programme blend into each other, creating a dynamic arrangement. The building comes up close to the crown of plane trees – which act as a filter from the street, apparently playing with this first colonnade of plant-life. 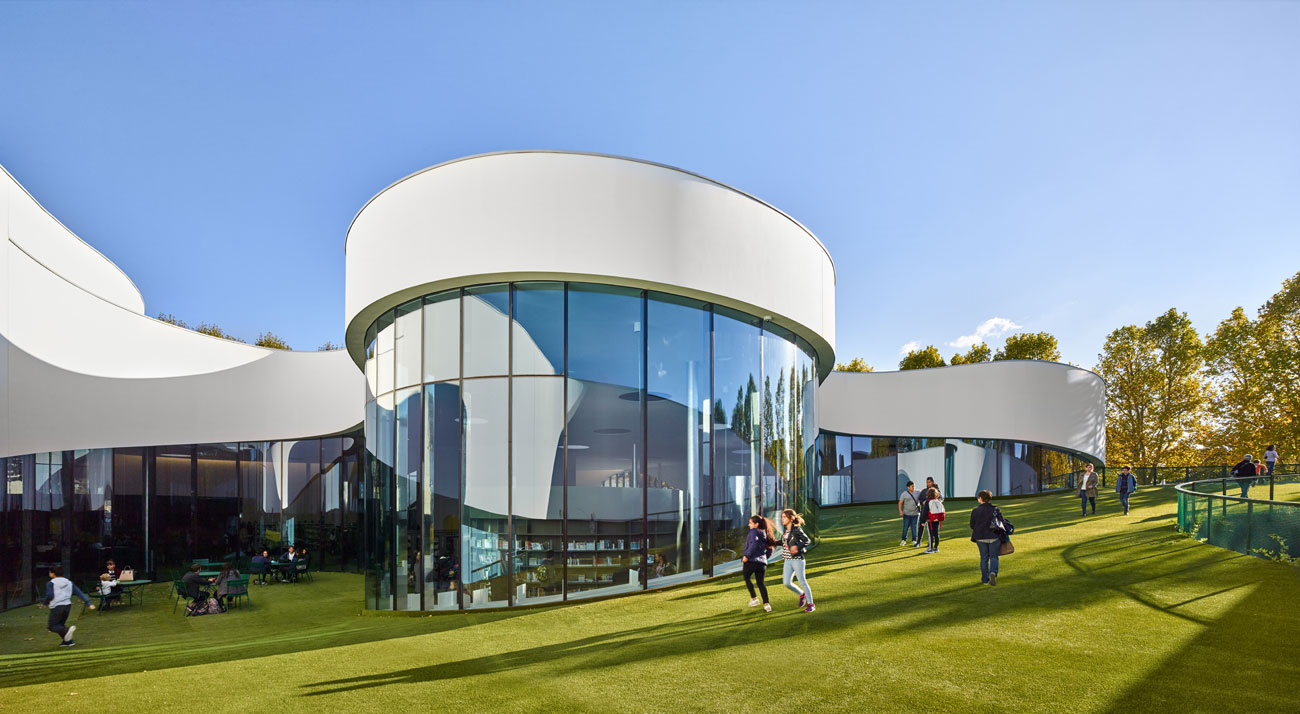 The façade serves as an unfurling ribbon that provides a backdrop to the different universes contained in the programme. Closest to the street the ribbon drops lower, and it rises again where the building is set further back. In the hollows, the border between the interior space and the urban space is less clear, which makes it possible to come closer to embrace the building visually. The hollow and solid sections produce an ambiguity between inside and outside, questioning the borders of public space. Space becomes uncertain: it ceases to have clear outlines and calls itself into question in practical terms.

Light spreads out along the ribbon, and the ribbon distributes the light to the area right in the heart of the building. A garden ramp offers another escape route toward the outside, leading upwards to a summer bar, the culminating point of the architectural promenade. The garden extends the indoor walkway, getting closer to the line of the horizon; the town disappears, leaving just the crown of plane trees to dialogue with the sky. New uses become possible: people can take a nap, picnic, read outside, or gather in a group. 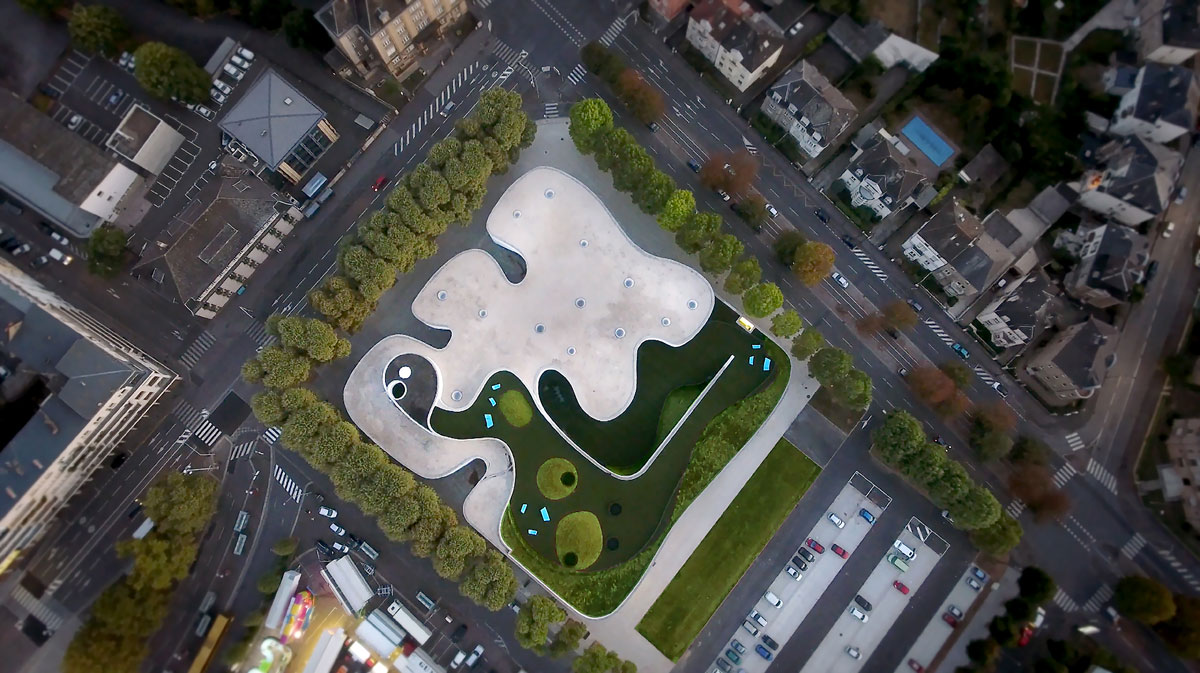 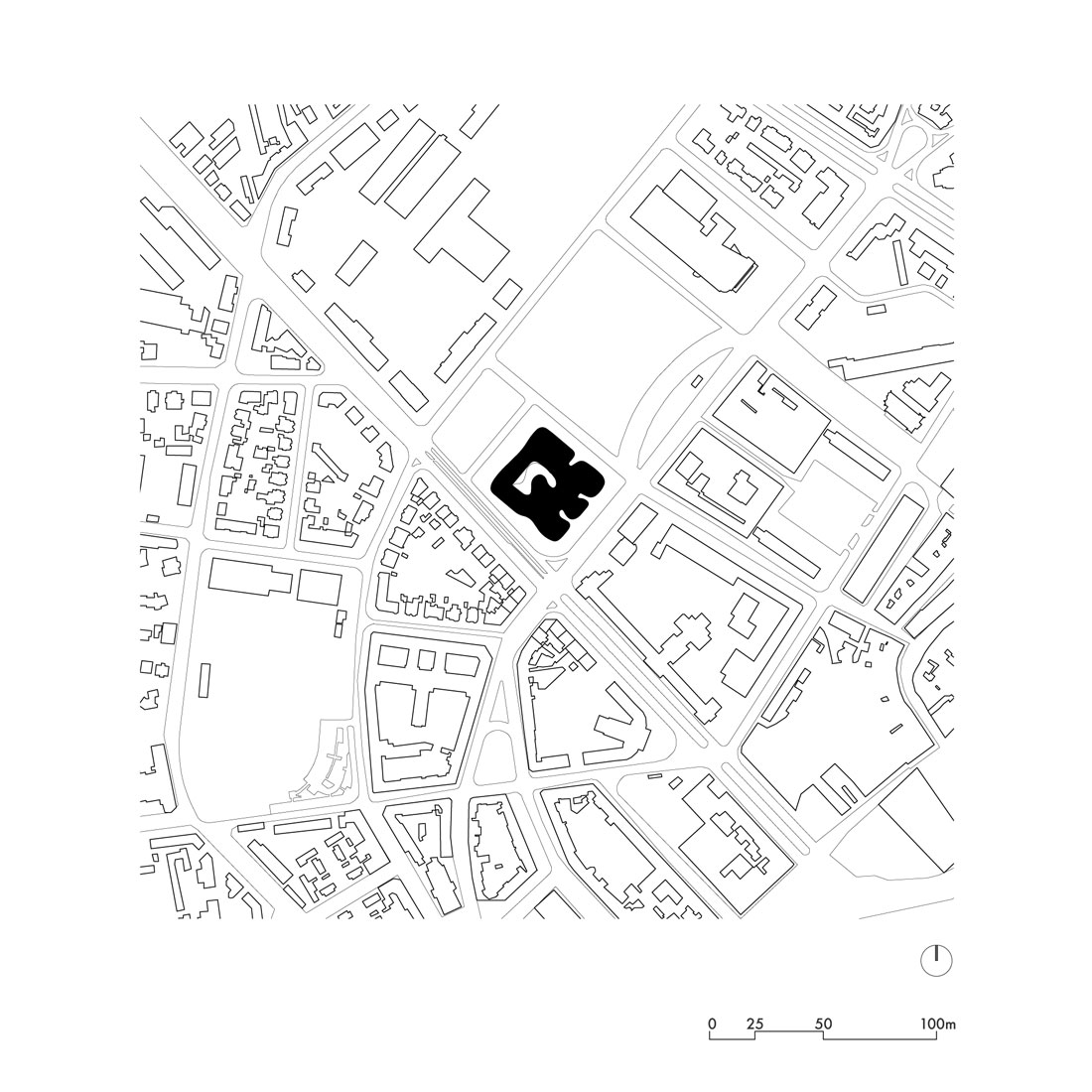 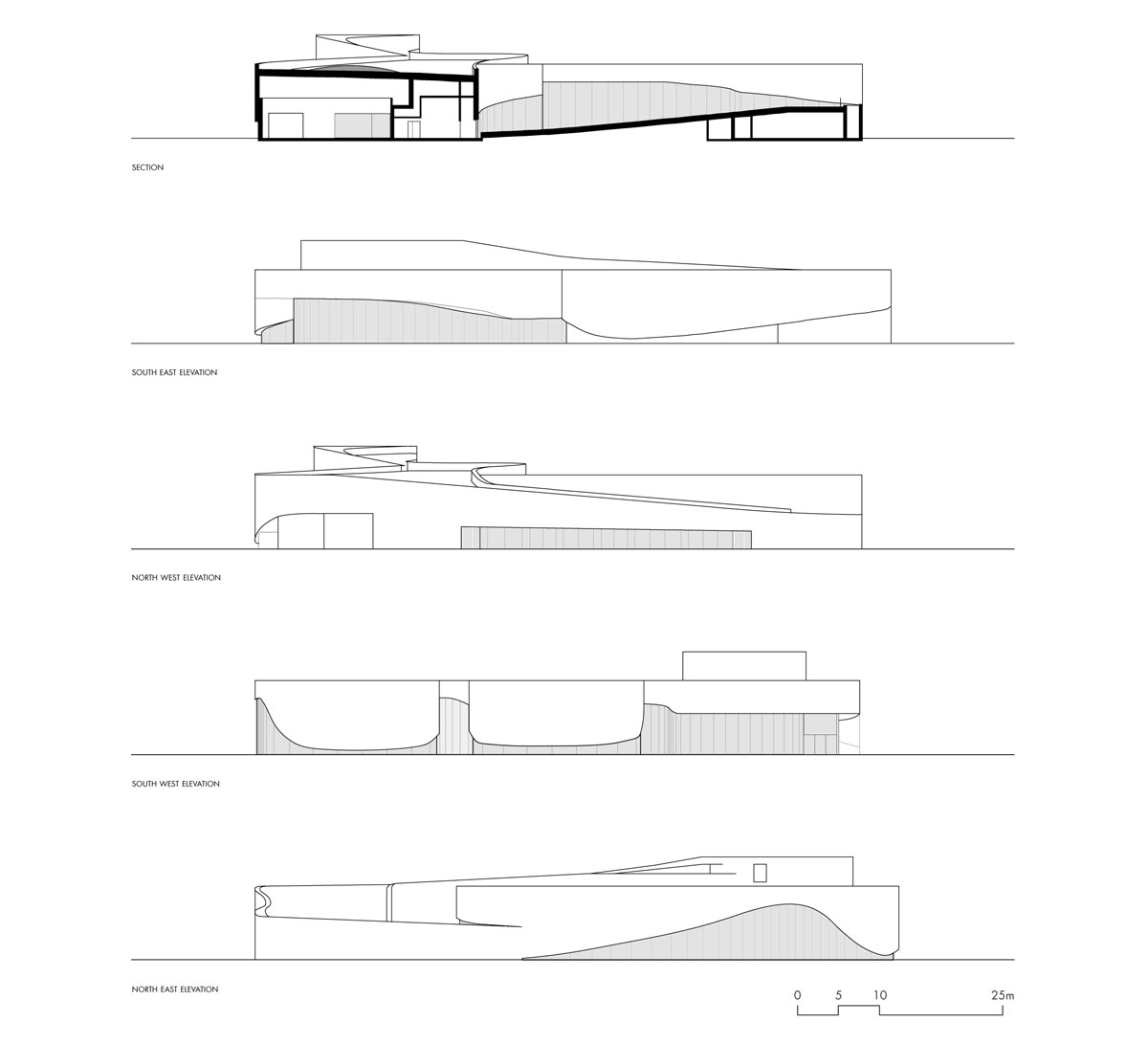 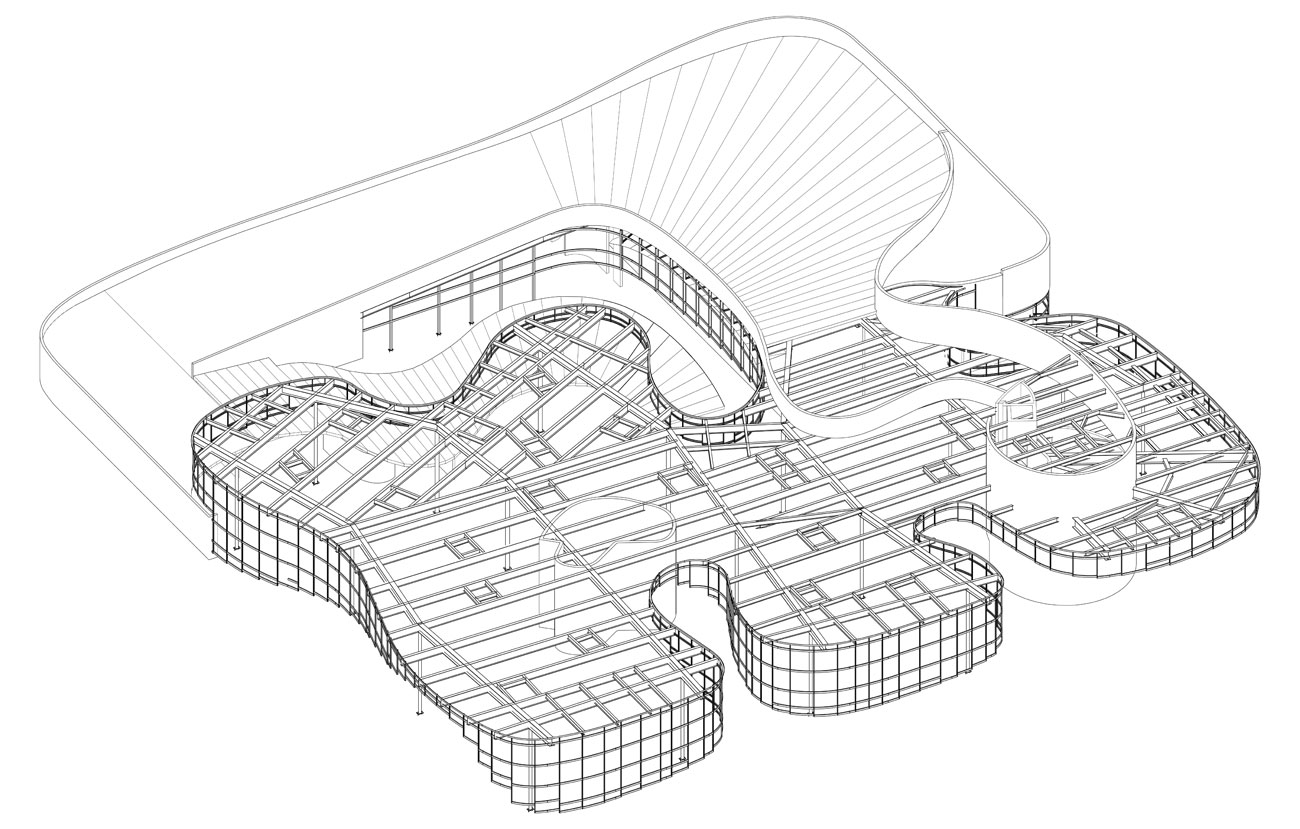 The building design is based on a principle of independent, irregular systems. Stacking these simple systems, each with their own logic, creates tension in the space and in how it is read. In this way, the optical perceptive space eludes the Euclidean space and its preference for straight lines. 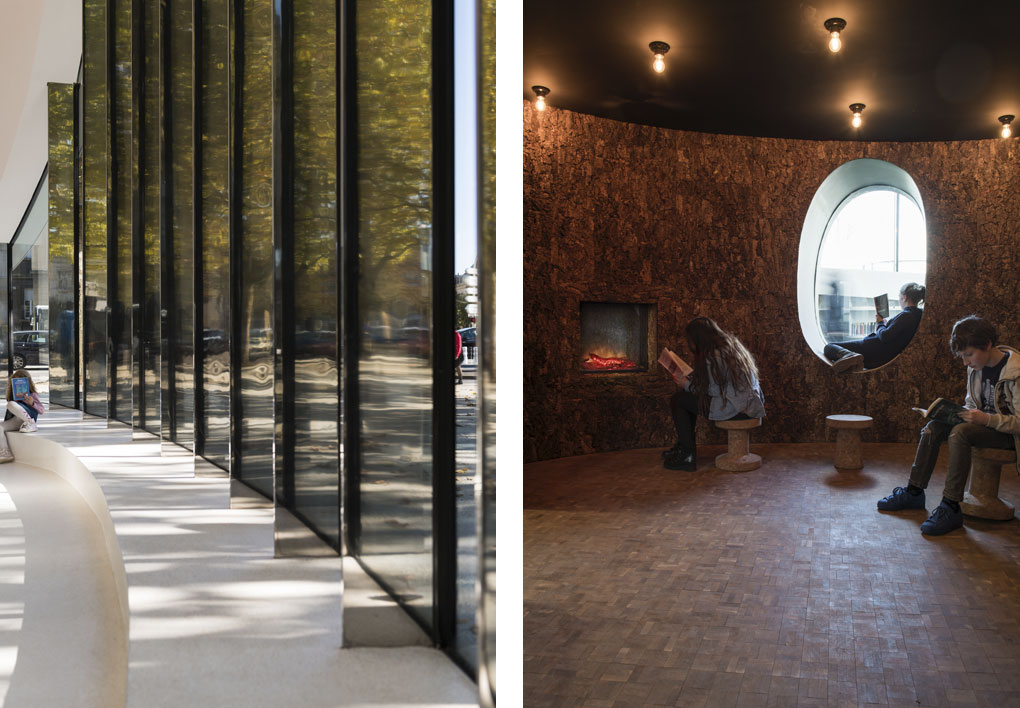 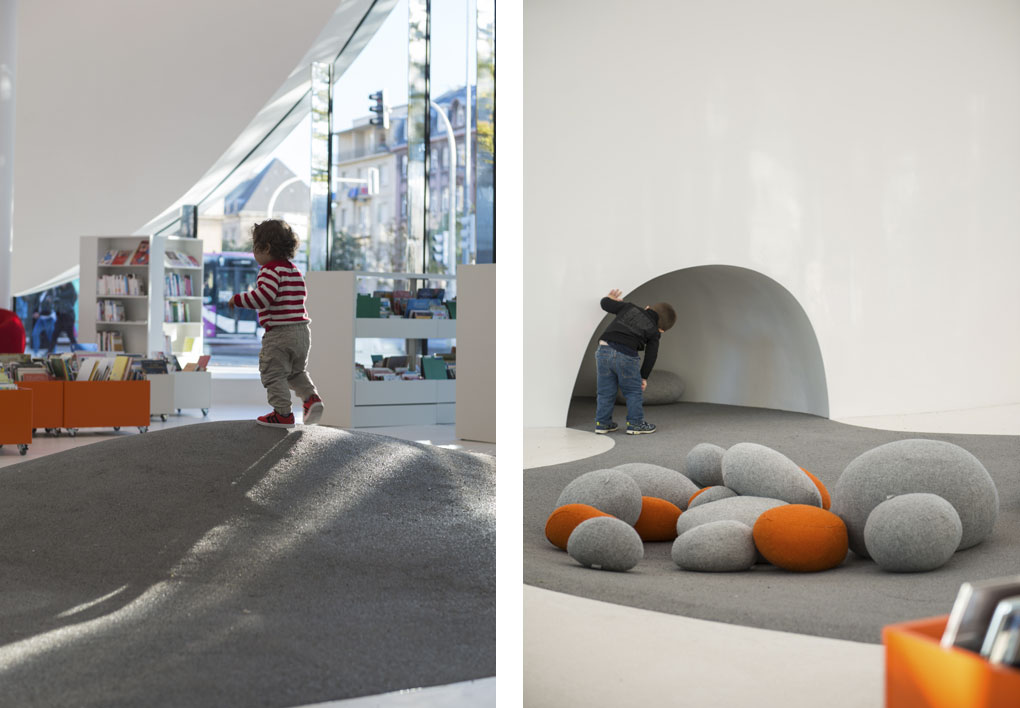 The bubbles contain very specific elements of the programme, such as a storytelling area, language laboratories, places for playing video games, a plastic arts room, etc. They are defined as cocoons where people are cut off from the other universes, escaping from the collective area. The bubbles are the last refuge, the most intimate part of the building. They do not respond to Cartesian logic either. The distance between them depends on their area of influence and on their scale. The colour and the materials of the principal space bring out variations of light and colouring that contrast with the material nature of the bubbles. 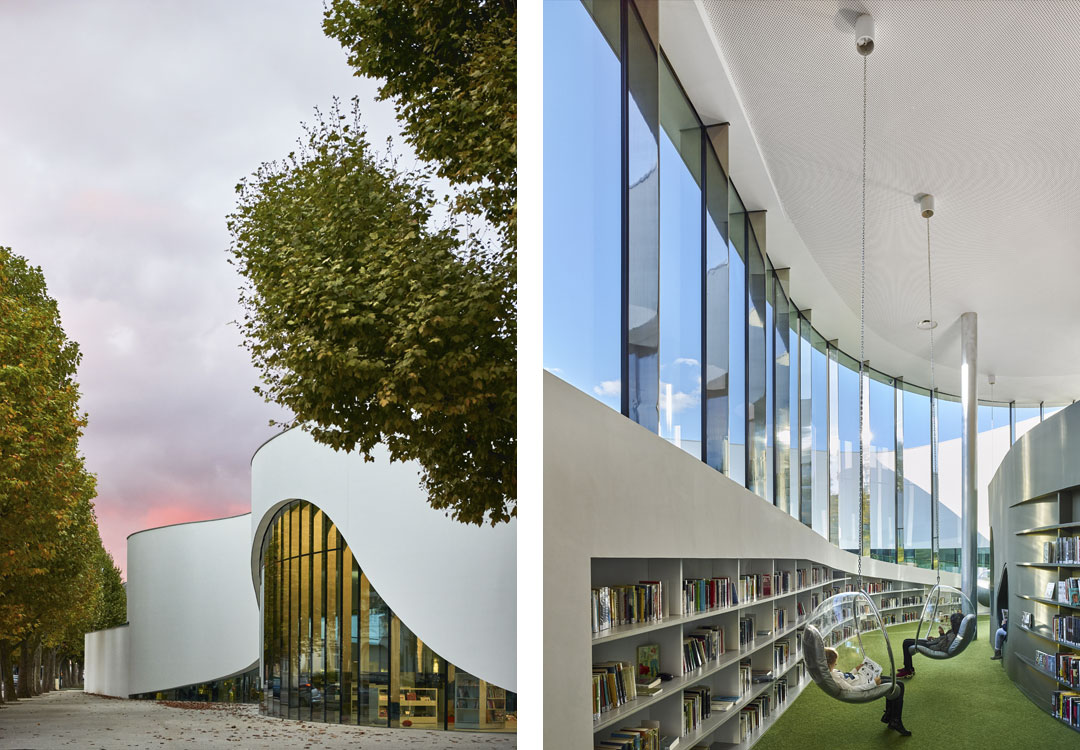 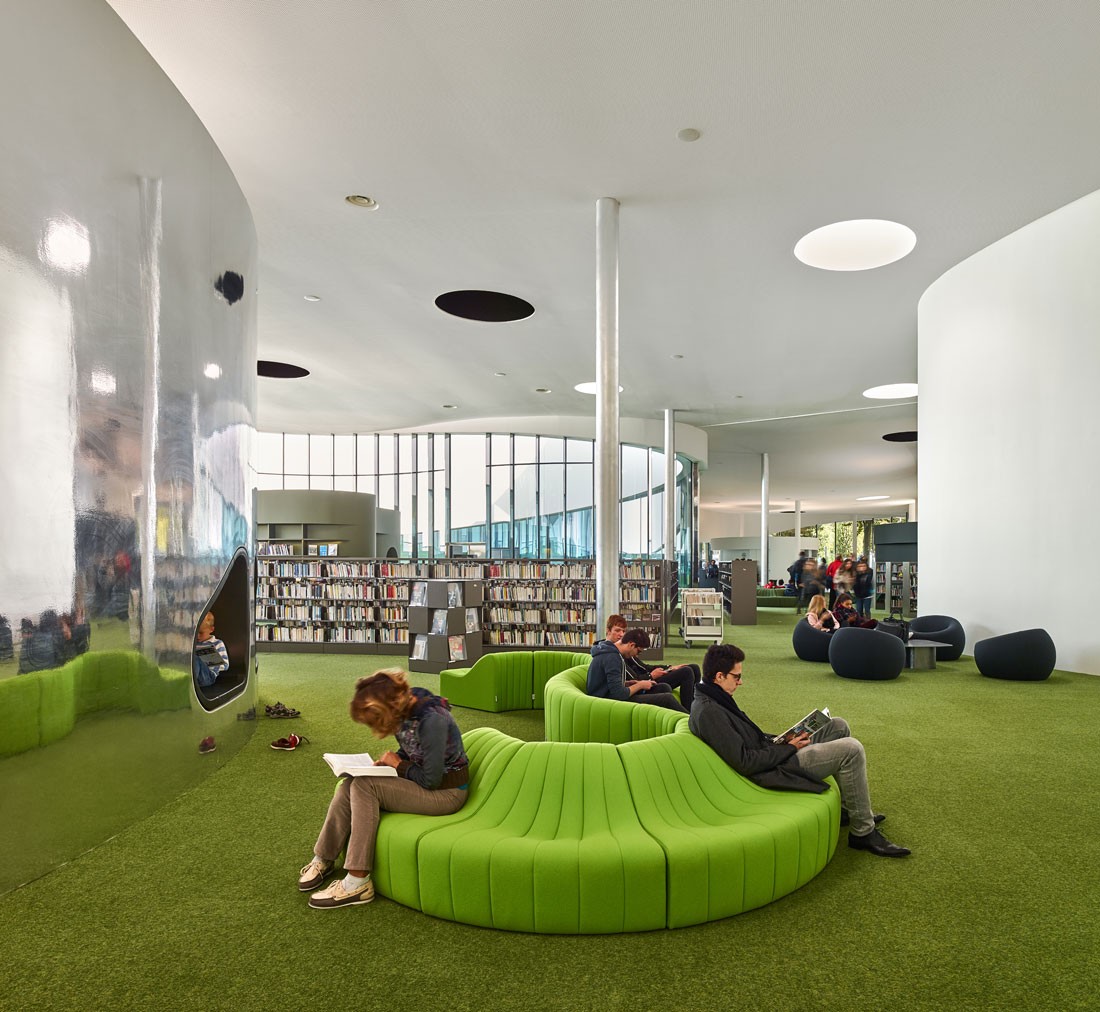 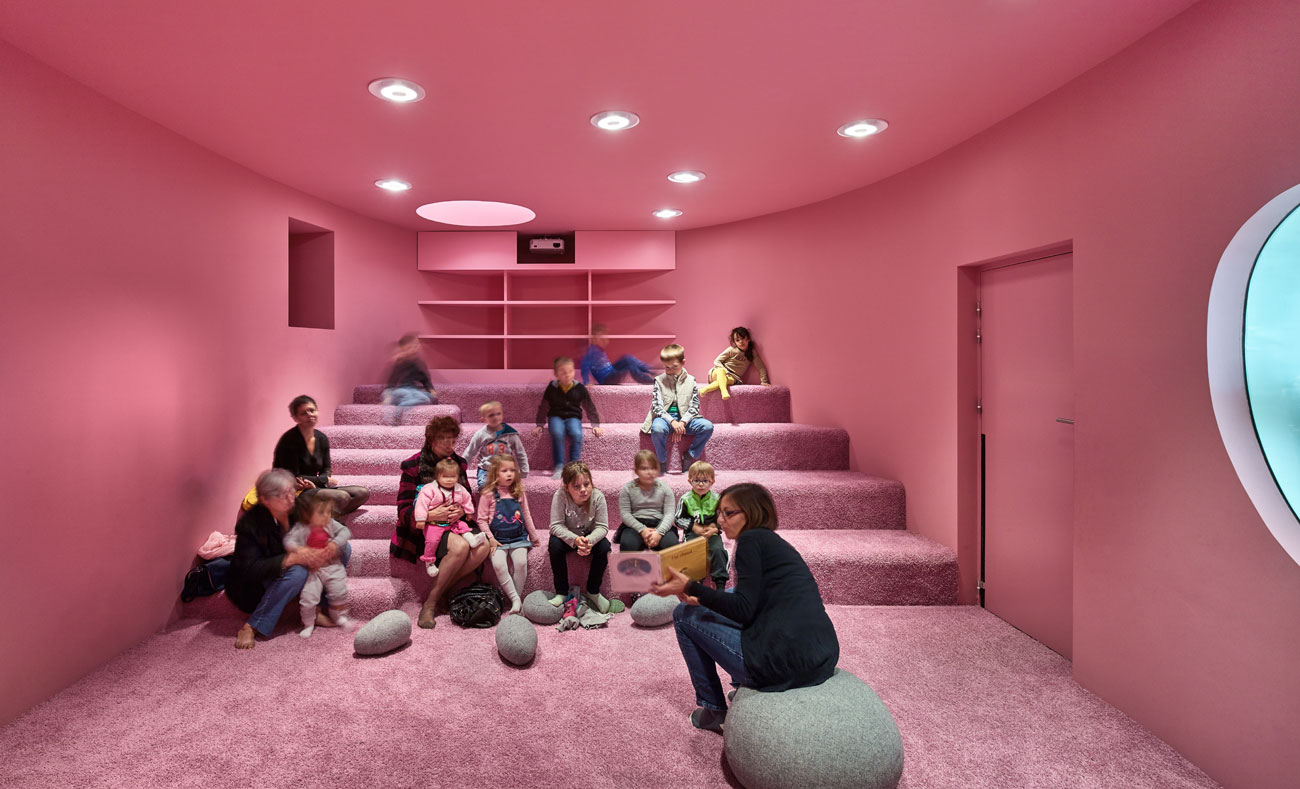 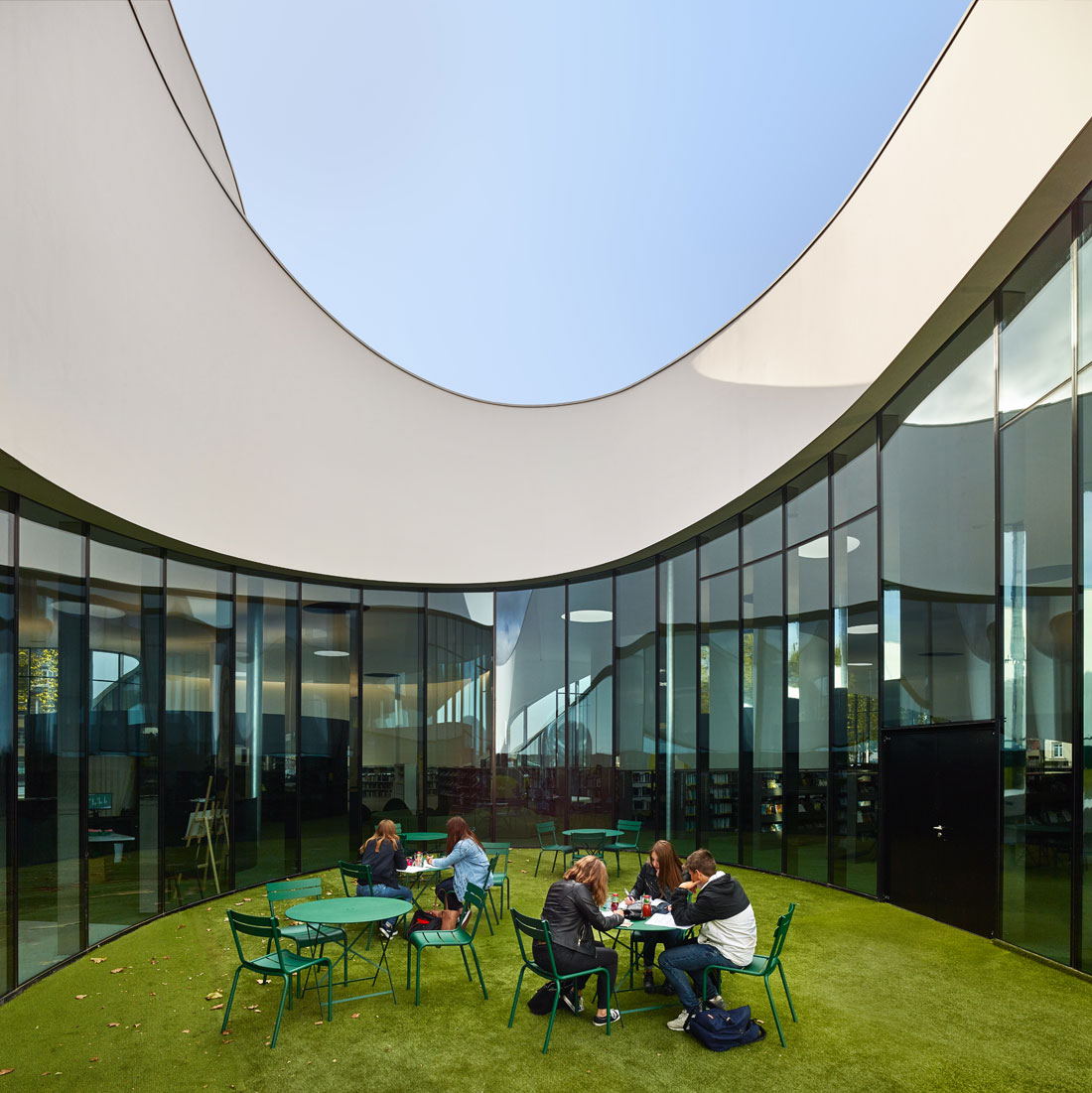 The space is fluid, and the multiple routes offer constantly renewed viewpoints. The promenade turns into a process of revealing the various universes. The unfolding of the outer envelope accentuates this impression of infinite space. In this “ineffable” space, the notion of gravity seems to disappear – the roof and walls appear to float. This sophistication generates a “plastic acoustic”, which lends this new place an atmosphere that transports users and re-examines the relationship with the body and fluidity. There is no unequivocal reading of the space; the perception one has of it reveals a complexity and an unexpected richness. It is a place of freedom. 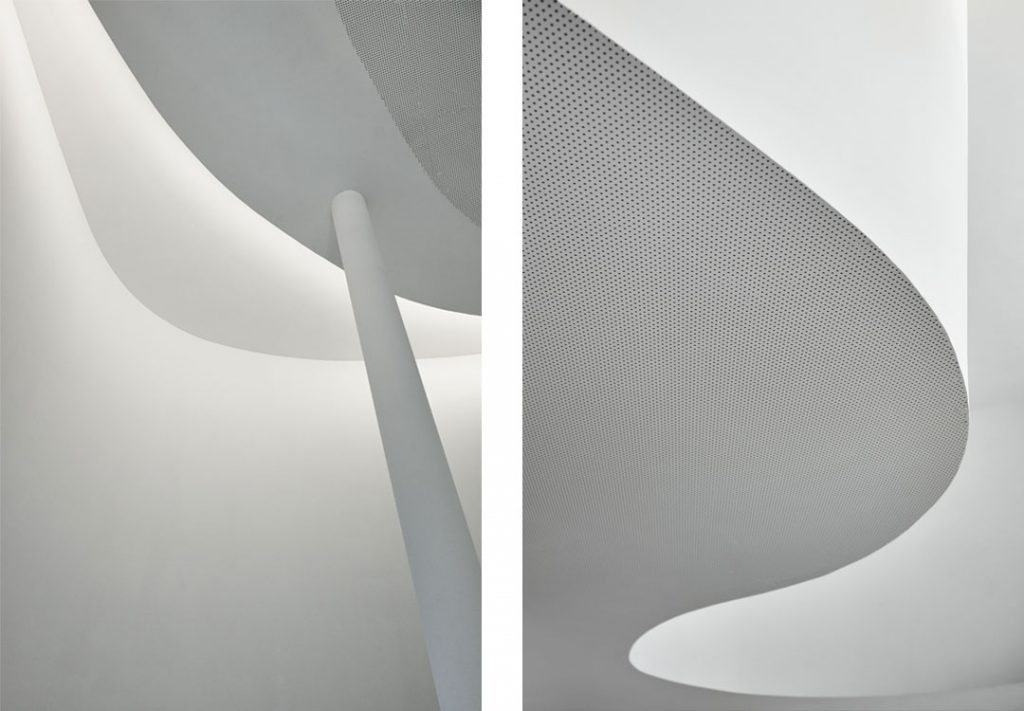 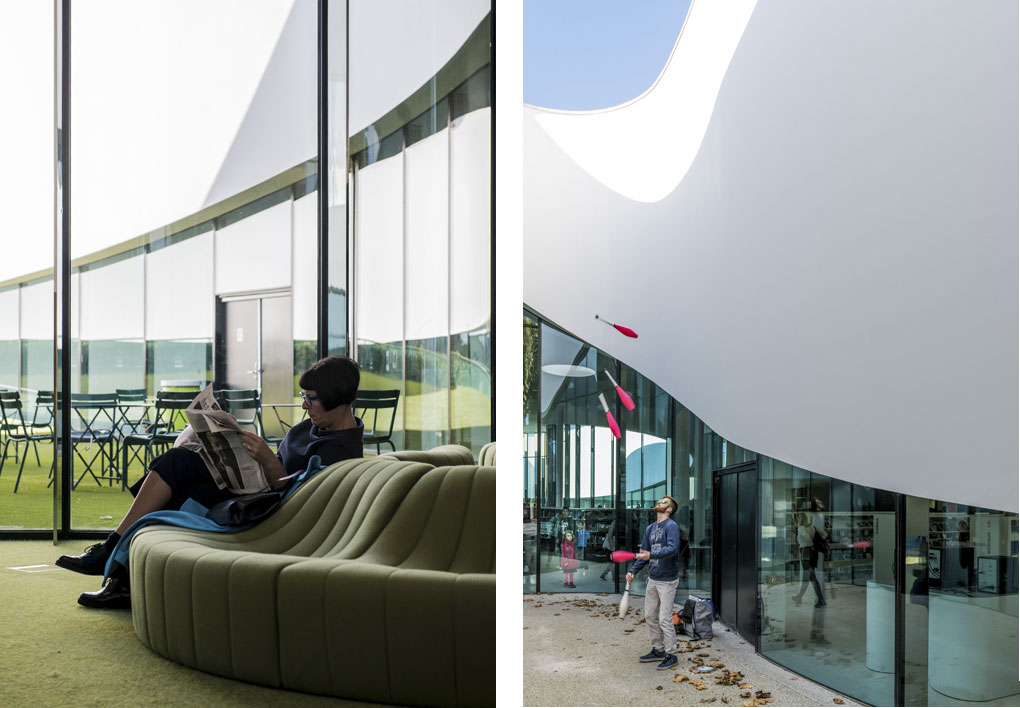