Makoko Floating School is a prototype floating structure, built for the coastal water community of Makoko, and located on the lagoon fringe of Nigeria’s largest city, Lagos. As a pilot project, it has taken an innovative approach to address the community’s social and physical needs in view of the impact of climate change and a rapidly urbanizing African context. Its main aim is to generate a sustainable, ecological, alternative building system and urban culture for the teeming population of Africa’s coastal regions.

An estimated 100,000 people reside in Makoko in housing units built on stilts. Yet the community has no roads, no land and no formal infrastructure to support its day-to-day survival. In many ways, Makoko epitomizes the most critical challenges posed by urbanization and climate change in coastal Africa. At the same time, it also inspires possible solutions and alternatives to the invasive culture of land reclamation. 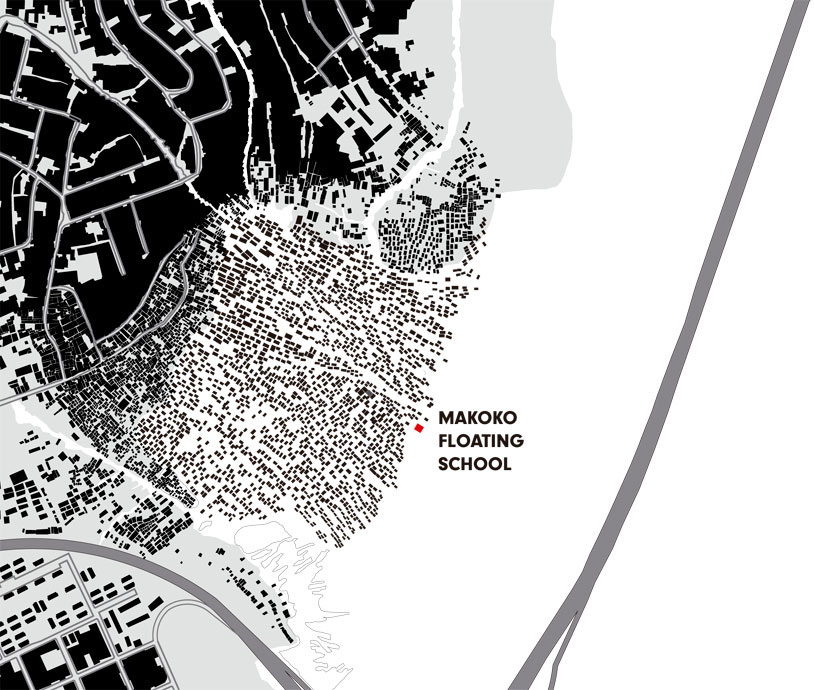 Until now Makoko has been served by one English speaking primary school, built on uneven reclaimed land, surrounded by constantly changing waters. Like many homes in Makoko, this has rendered the primary school building structurally precarious and susceptible to recurrent flooding. Sadly, the inability of the building to effectively withstand the impact of increased rainfall and flooding has frequently threatened local children’s access to their basic need – the opportunity of education.

In response to this and in close collaboration with the Makoko community, NLÉ has developed a prototype floating structure that serves its first pupils and is officially being used as a school, whilst being scalable and adaptable for other uses, such as a community hub, health clinic, market, entertainment center or housing. The prototype’s versatile structure is a safe and economical floating triangular frame that allows flexibility for customization and completion based on specific needs and capacities. 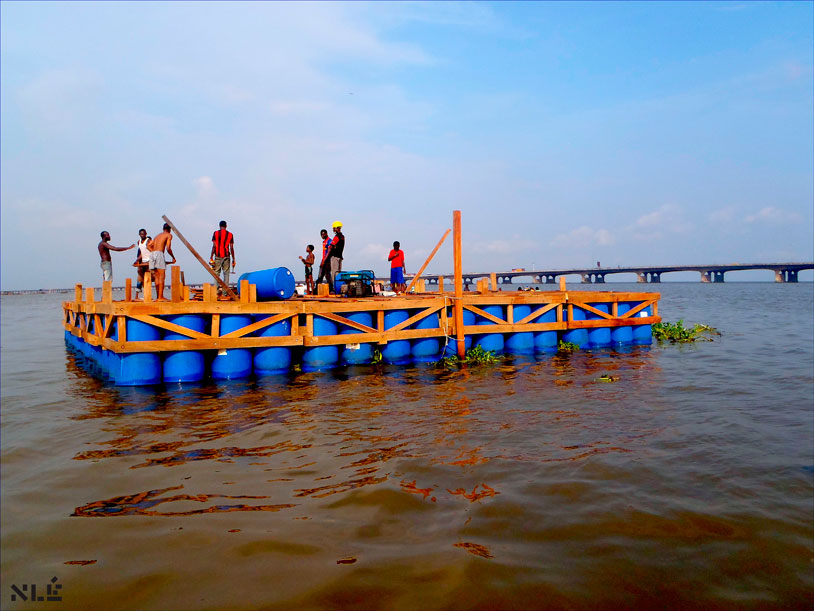 The triangular A-frame or pyramid is 10m high with a 10m x 10m base. It is an ideal shape for a floating object on water due to its relatively low center of gravity, which provides stability and balance even in heavy winds. It also has a total capacity to safely support a hundred adults, even in extreme weather conditions. 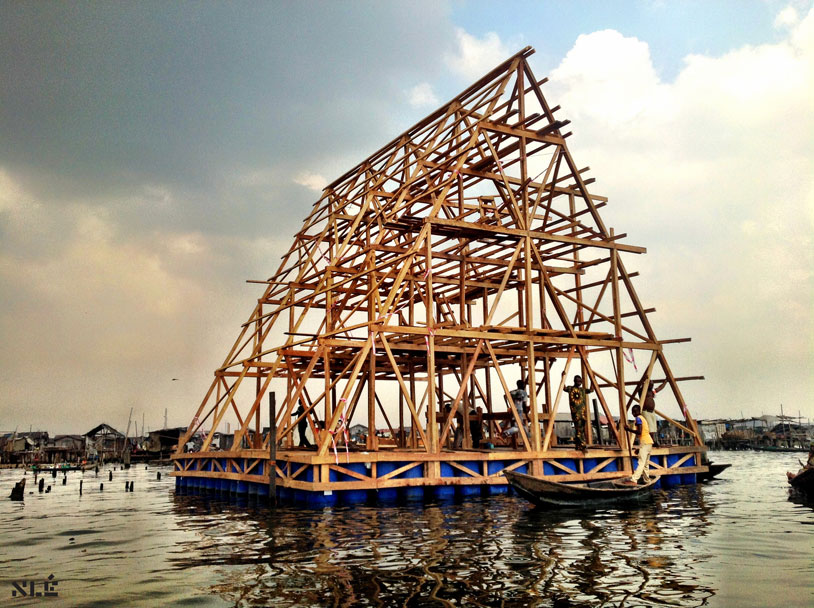 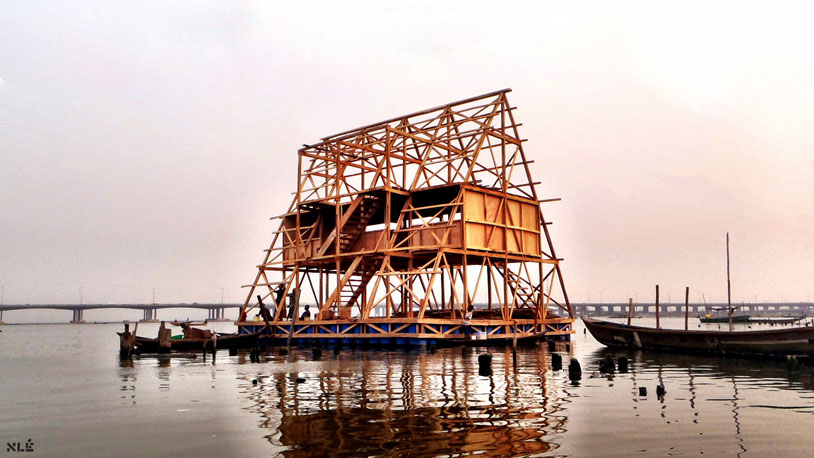 The building has three levels. The 1st level is an open play area for school breaks and assembly, which also serves as a community space during after hours. The 2nd level is an enclosed space for two to four classrooms, providing enough space for sixty to a hundred pupils. A staircase on the side connects the open play area, the classrooms and a semi enclosed workshop space on the 3rd level. 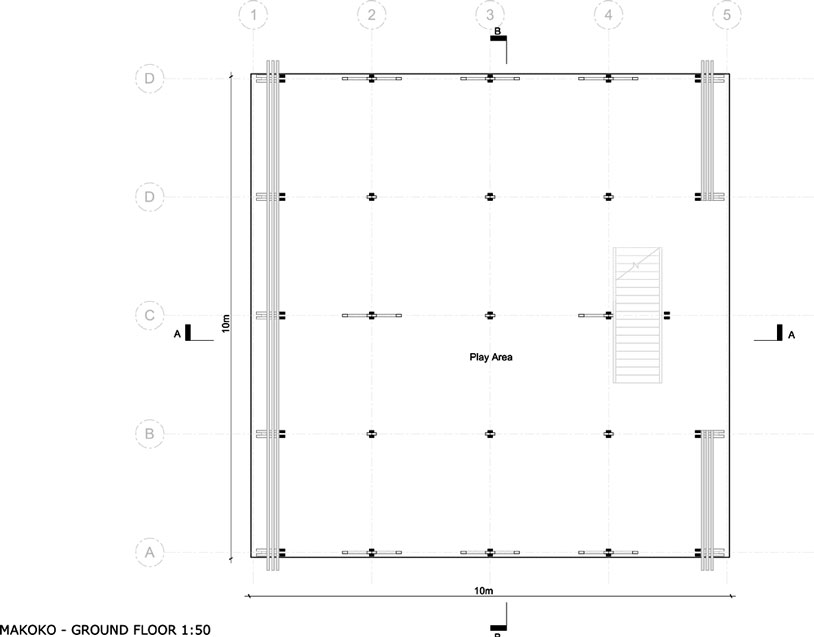 The simple yet innovative structure adheres to ideal standards of sustainable development with its inclusive technologies for renewable energy, waste reduction, water and sewage treatment as well as the promotion of low-carbon transport. Furthermore a team of eight Makoko based builders constructed it using eco-friendly, locally sourced bamboo and wood procured from a local sawmill. 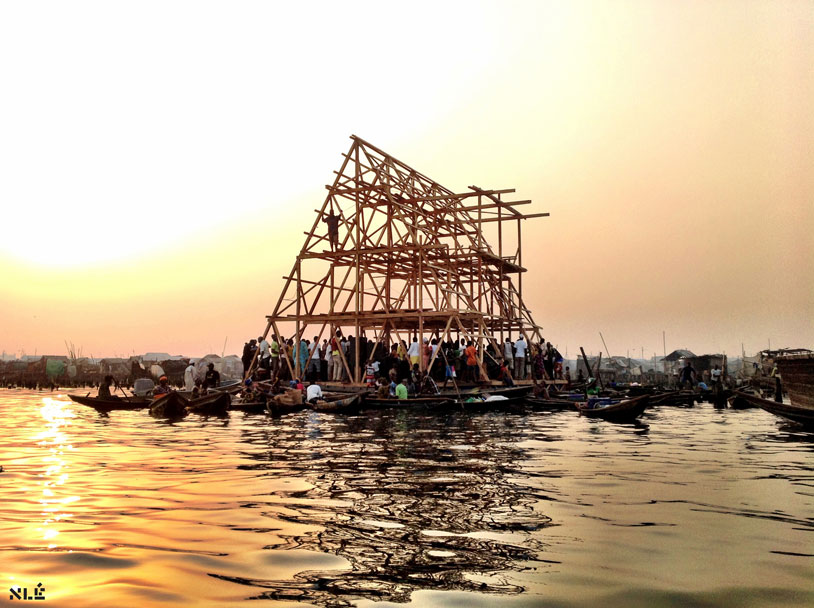 Construction began in September 2012 with floatation mock-ups and testing. Recycled empty plastic barrels found abundantly in Lagos were used for the building’s buoyancy system, which consists of 16 wooden modules, each containing 16 barrels. The modules were assembled on the water, creating the platform that provides buoyancy for the building and its users. Once this was assembled, construction of the A-frame followed and was completed by March 2013. Makoko Floating School will soon welcome its first pupils. 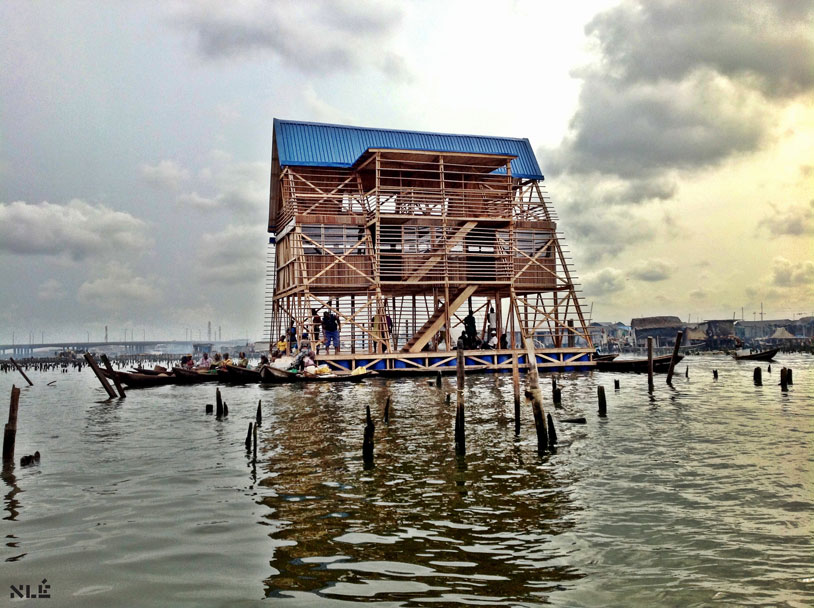 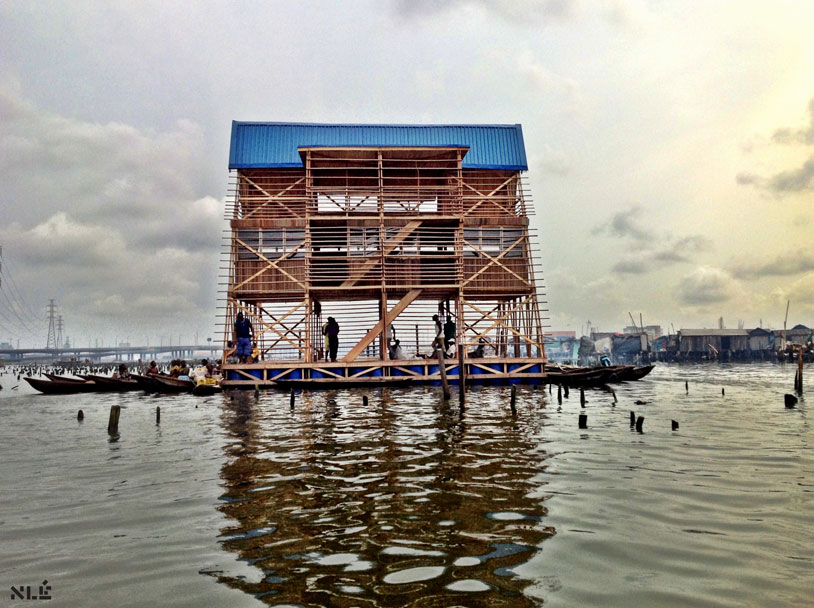 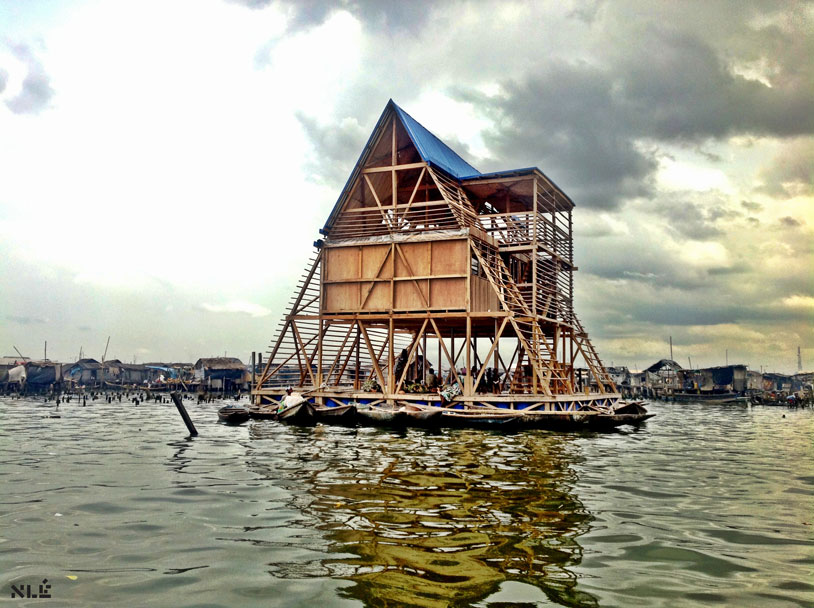 The project was initiated, designed and built by NLÉ in collaboration with the Makoko Waterfront Community, in Lagos State. The project was initially self-funded by NLÉ and later received research funds from Heinrich Boll Stiftung as well as funds for its construction from the UNDP / Federal Ministry of Environment Africa Adaptation Programme (AAP). 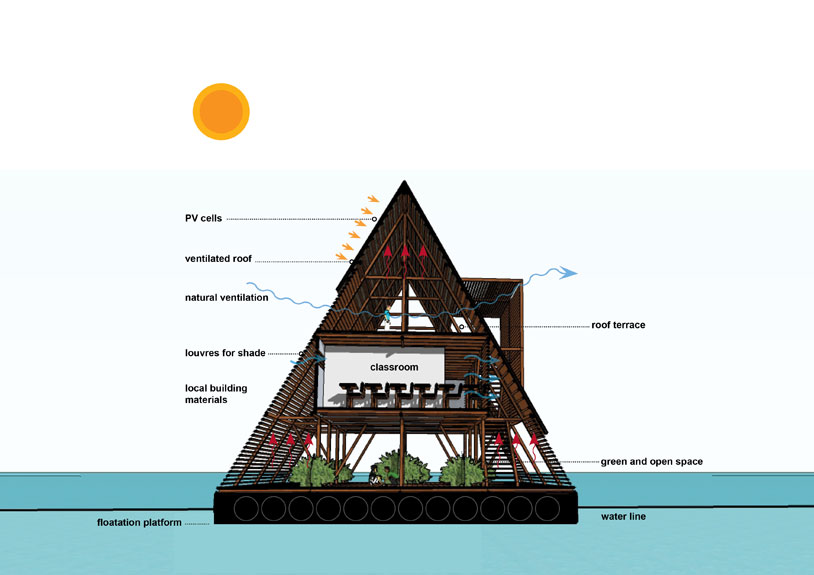 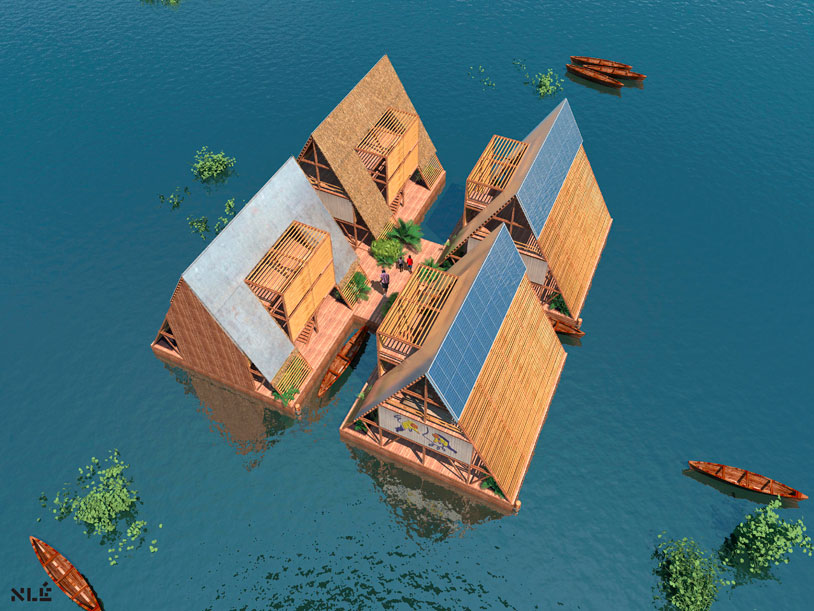 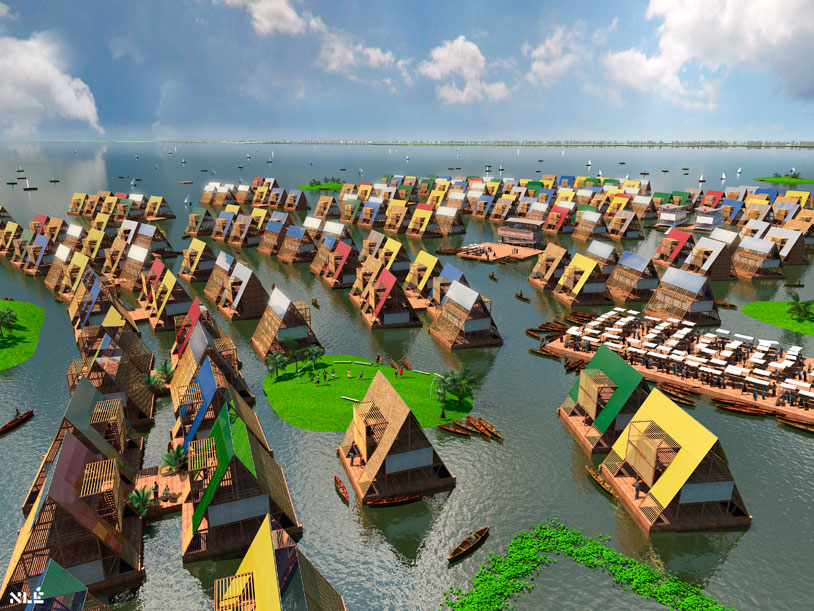