There were three starting points to the design: understanding the historic value of Lleialtat Santsenca (1928), an old working class cooperative in the Sants neighborhood; investigating the building’s (physical) state in detail, in order to maintain as much of it as possible; and being sensitive to the collaborative process launched by neighborhood organizations in 2009 to recover the building. 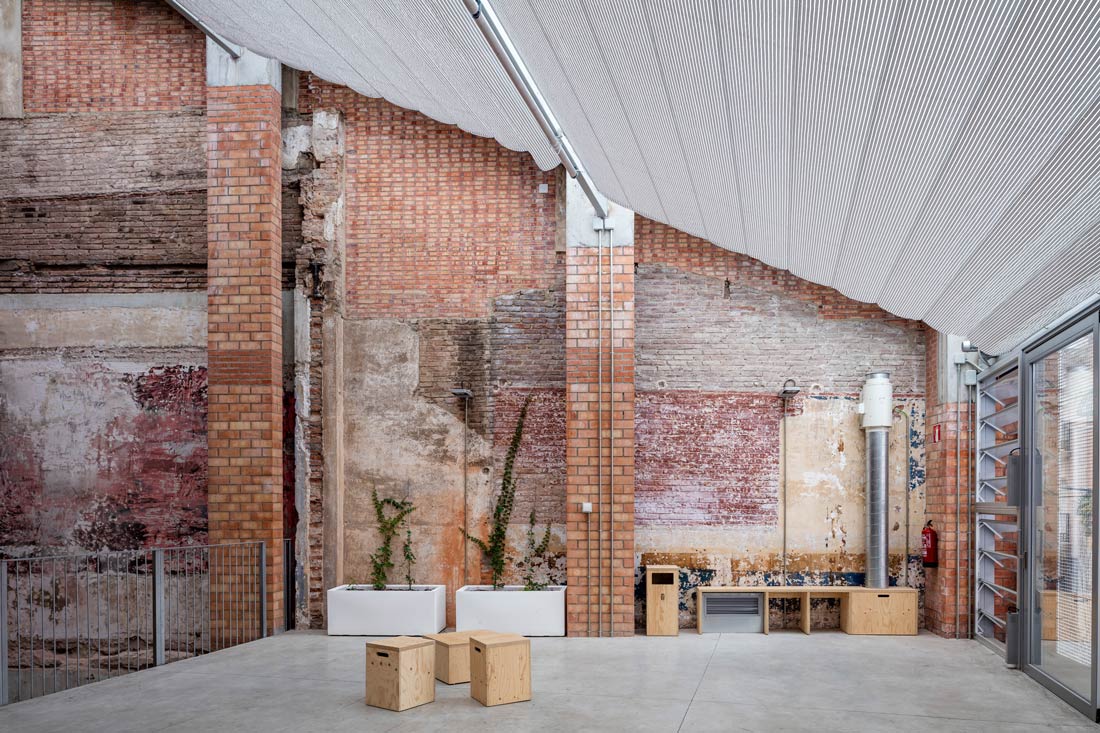 To this end, four basic objectives were set: first, taking advantage of everything that could be used from the original building; second, defining an intervention strategy to outline the essential actions (directed at conservation or otherwise) to recover and increase the potential uses of all the spaces; third, establishing an intensive – and tense, if need be – dialogue with the surroundings; and, fourth, developing a sustainable proposal for the work on the existing construction as well as the new interventions. 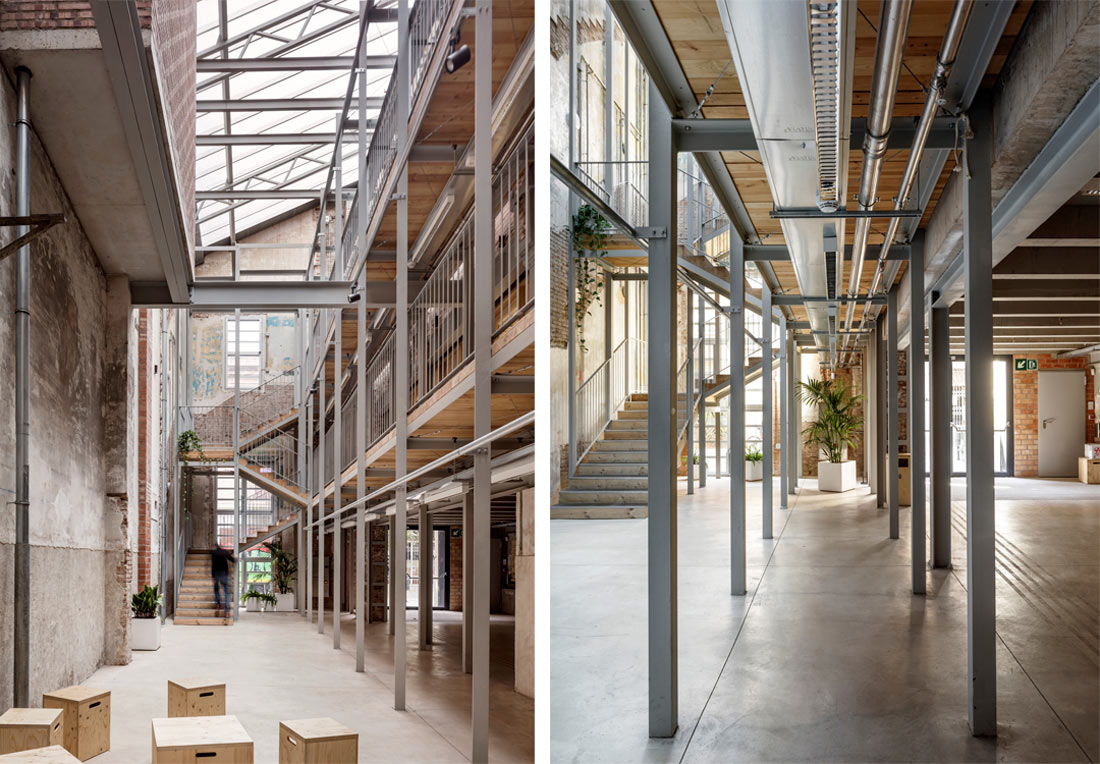 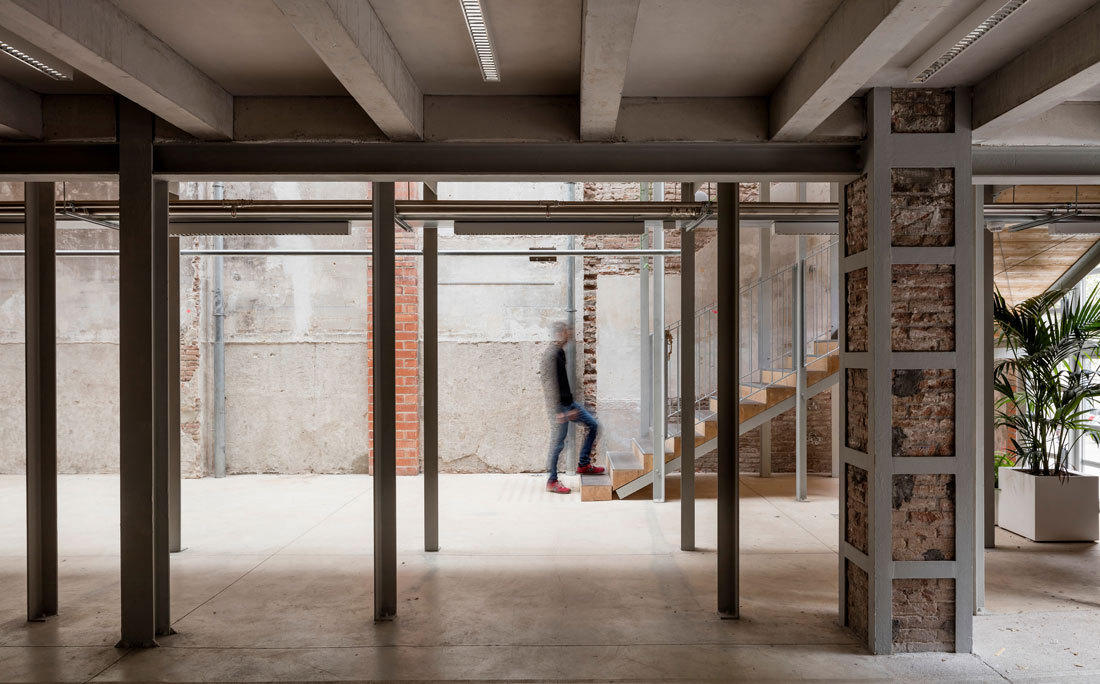 The building consists of three structural bodies: the main body, facing Olzinelles and Altafulla streets, houses the two main halls (an old shop on the ground floor and atrium on the first floor); the central body, with access from Altafulla street; and the interior body, with no street access, which is L-shaped. The precarious condition of the rest of the constructions, in addition to poor connections, encouraged the proposal of a large longitudinal void, joining the three volumes and all their spaces – new and old – through a gradual progression from more public to more private spaces. The void is produced by completely demolishing the centerline near the party wall facing Olzinelles street, creating an interior street of sorts, which is emphasized in the second structural volume by enlarging the existing light shaft. Finally, behind the final structural volume, a triple-height space adjoining the void in the two previous volumes wraps up the sequence. The succession of voids creates an atrium bounded by “new” façades opposite the existing party walls, which show traces of the building’s history. The atrium brings light and air into all the spaces, serving as the axis for horizontal and vertical circulations, and offering new potential uses for unforeseen programs. 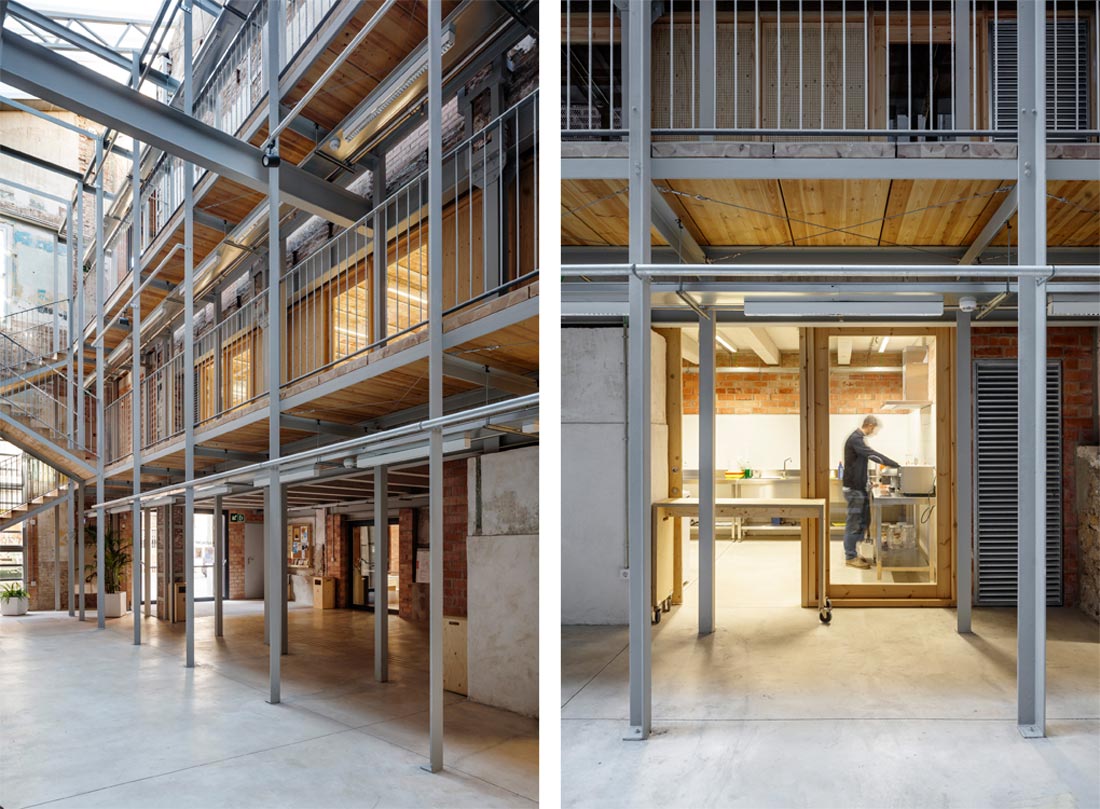 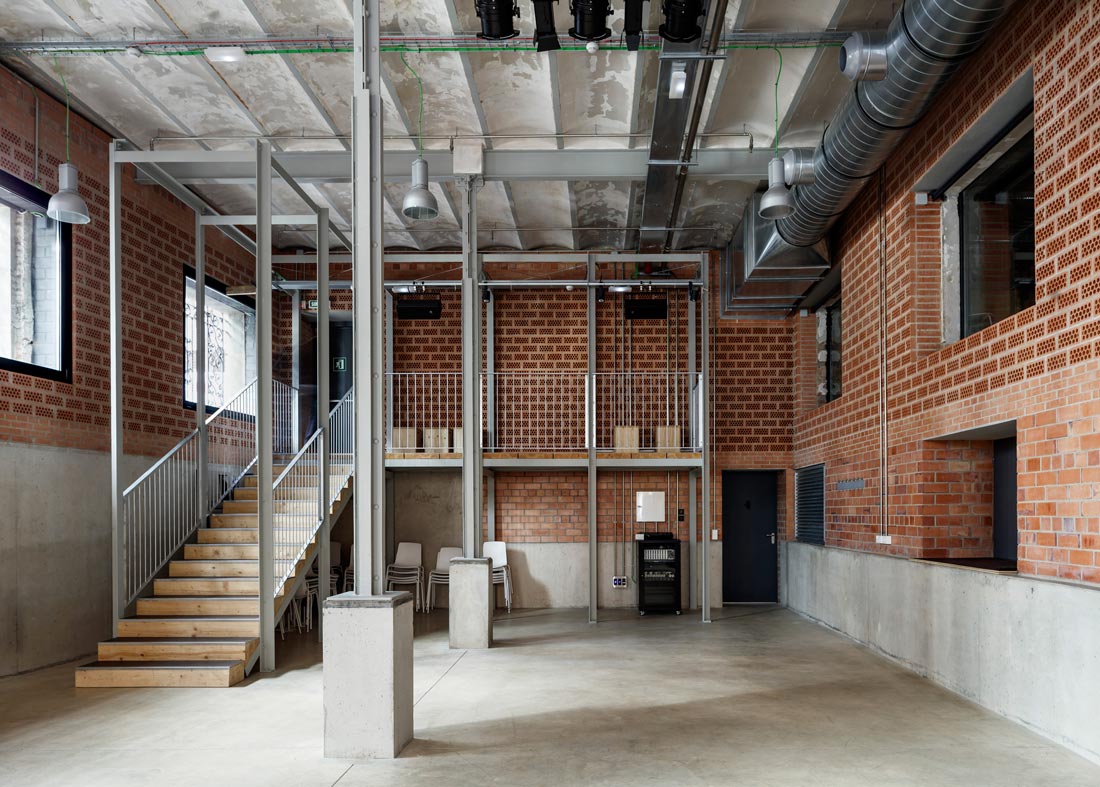 The existing roofs could not be used, so only the trusses in the main hall were maintained. A new roof was built above the whole building, associated volumetrically with the three structural bodies: three gable roofs made from cellular polycarbonate to the south and insulated sheet metal to the north, sitting atop a metal structure, illuminate and ventilate the atrium with windows in the highest corners to favor natural heat transfer. 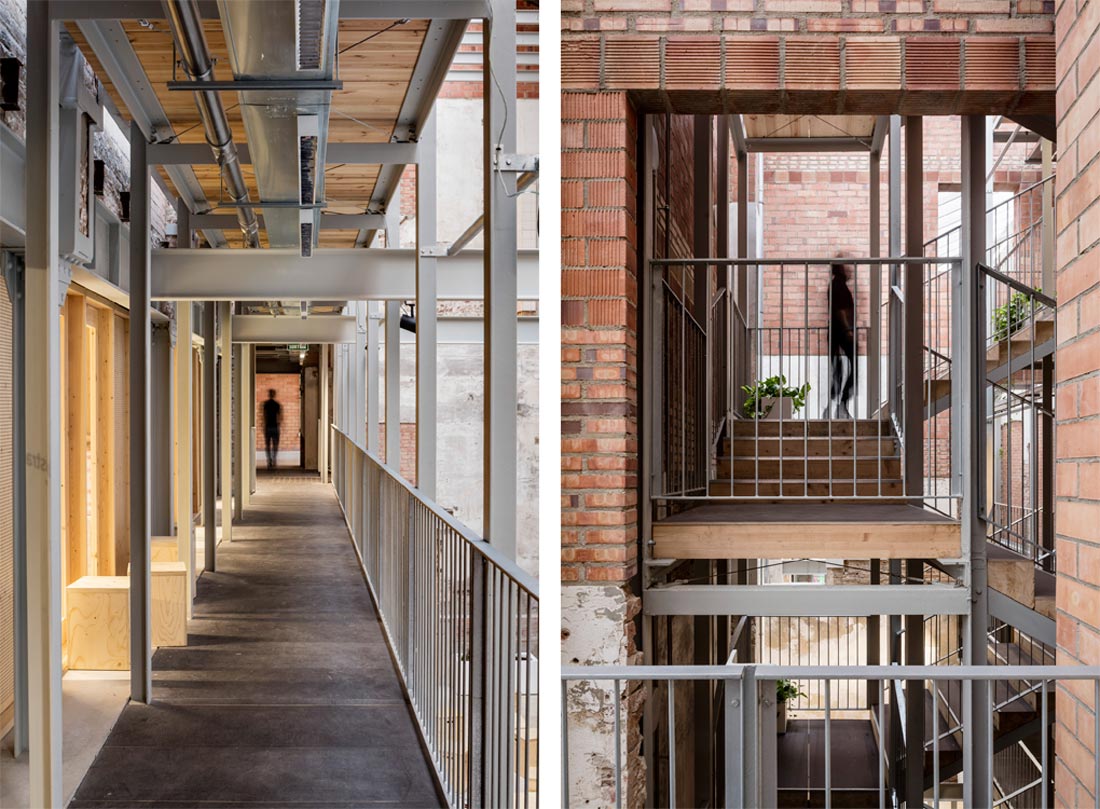 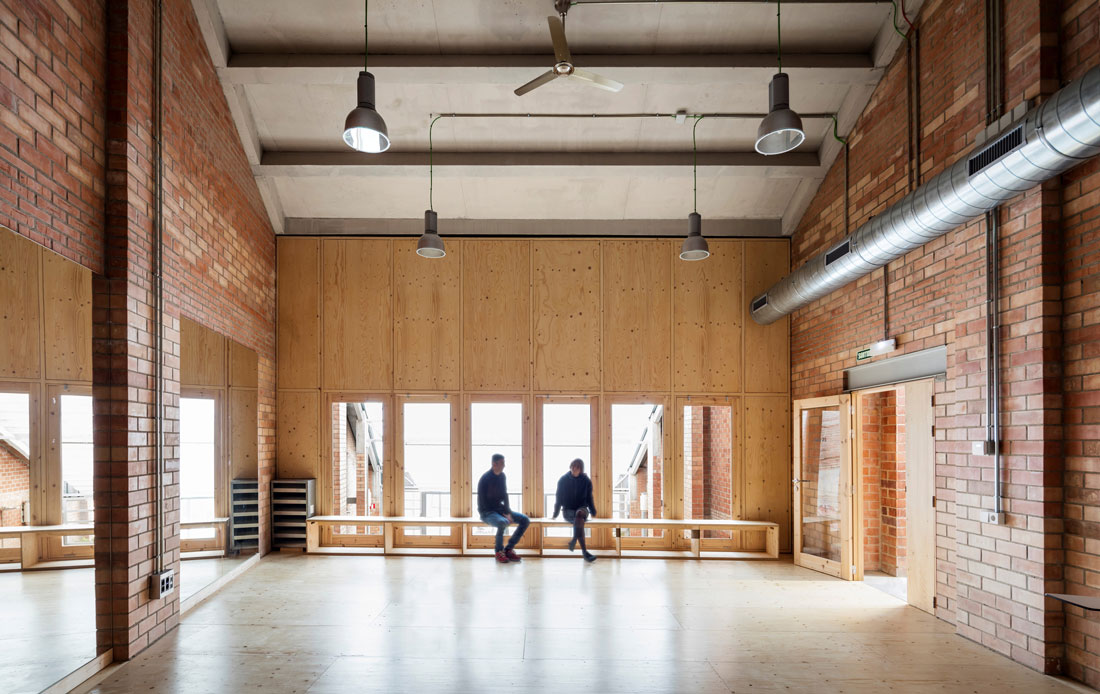 Inspired by Lina Bo Bardi’s Teatro Oficina, the Atrium is an intermediate bio-conditioned space that organizes all the circulations through a series of footbridges and stairs, which evoke the image of the scaffolding at a construction site. The building functions thermally using passive strategies based on inertia and insulation: three lightweight roofs permit natural lighting and favor ventilation. 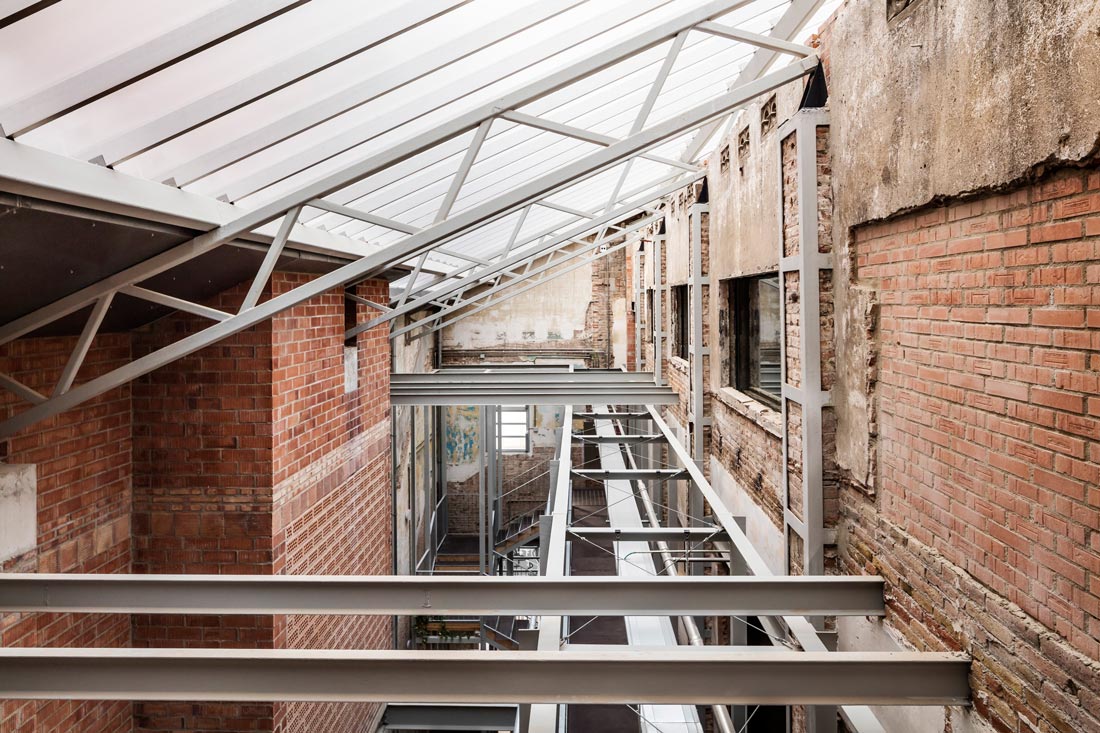 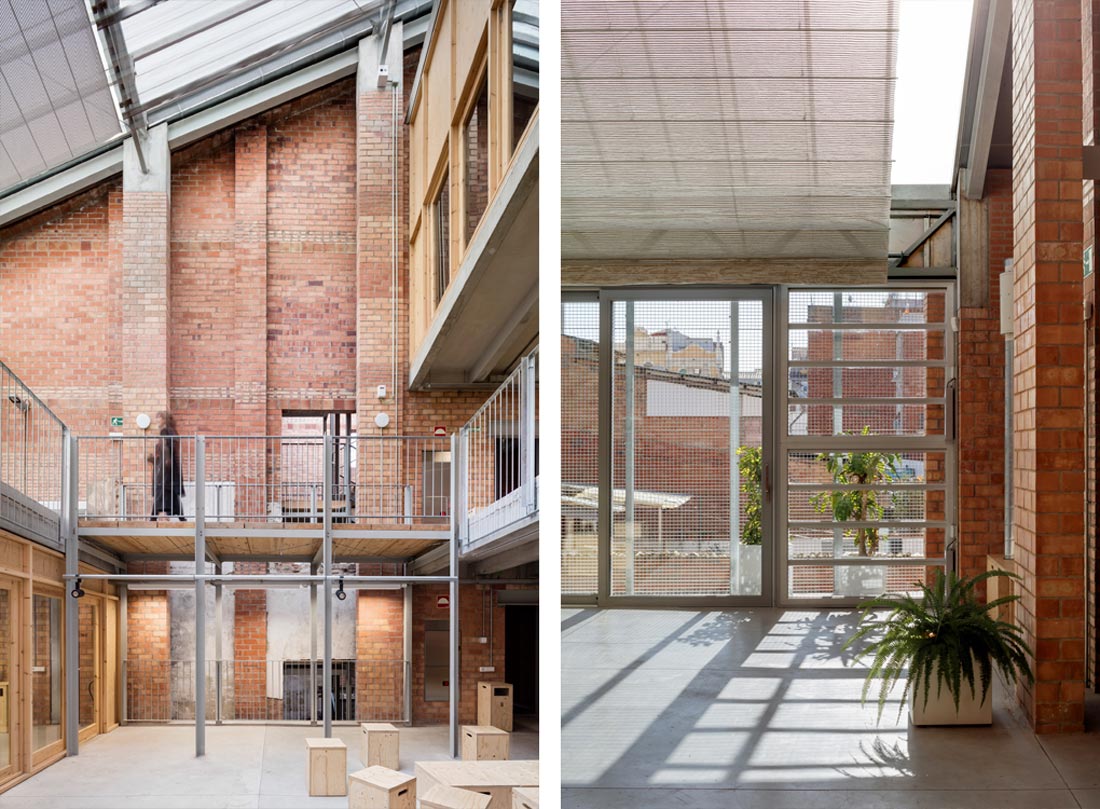 By increasing the volume of the roofs, it is possible to increase solar gain: in winter, heat is collected thanks to a heat recovery system for the interior spaces; in the summer, the air in the top part of the atrium is reheated, forcing convection, which releases the hot air by opening the roof ridge windows, operated by automatic sensors.

In winter, the climate-controlled spaces release warm air, tempering the Atrium; in the third body, due to an excess of solar radiation, a ventilated chamber with a sun filter optimizes solar caption in winter and summer. 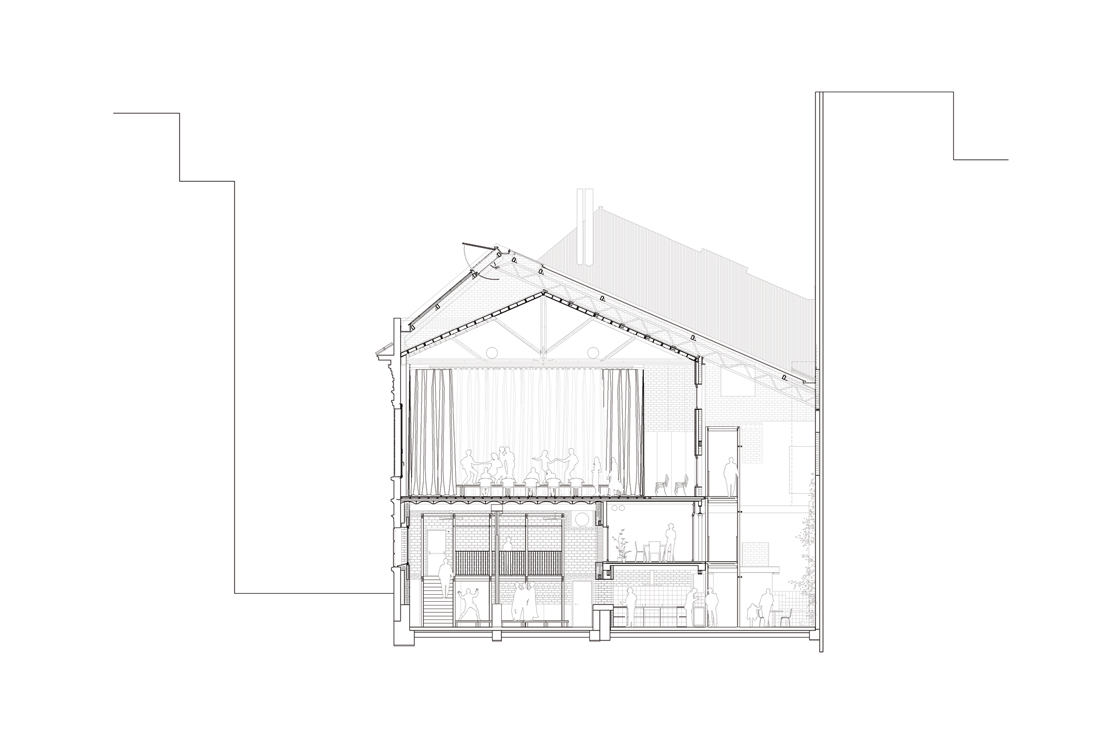 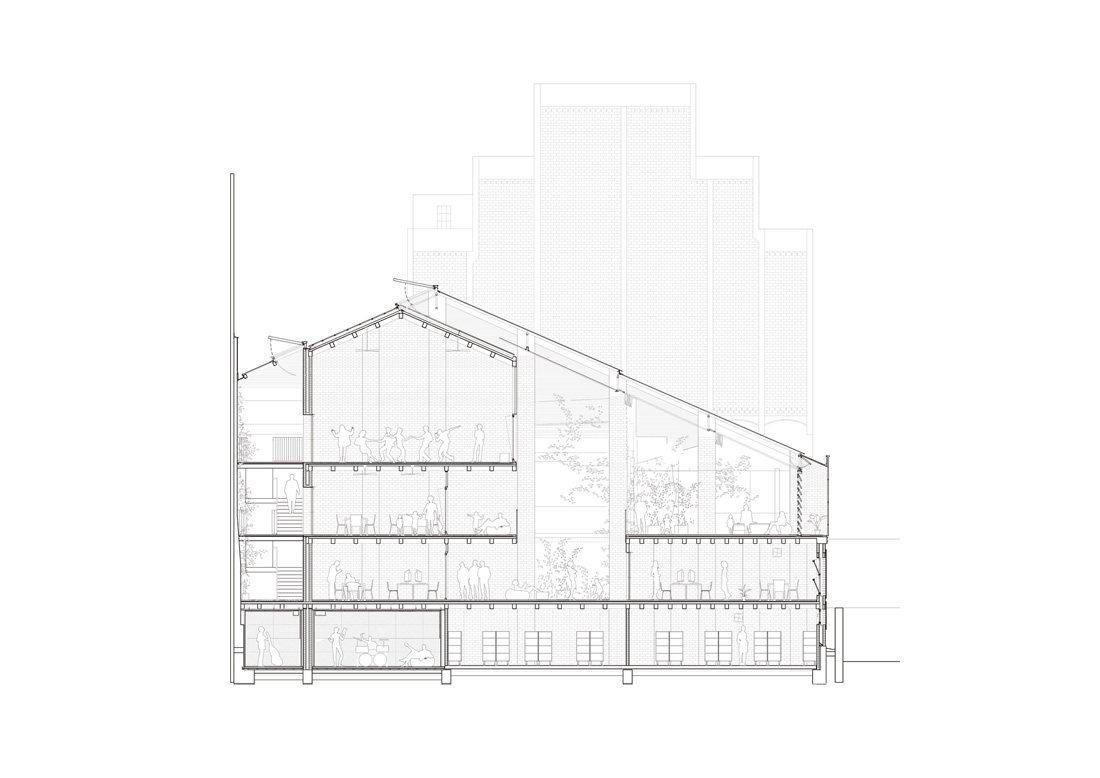 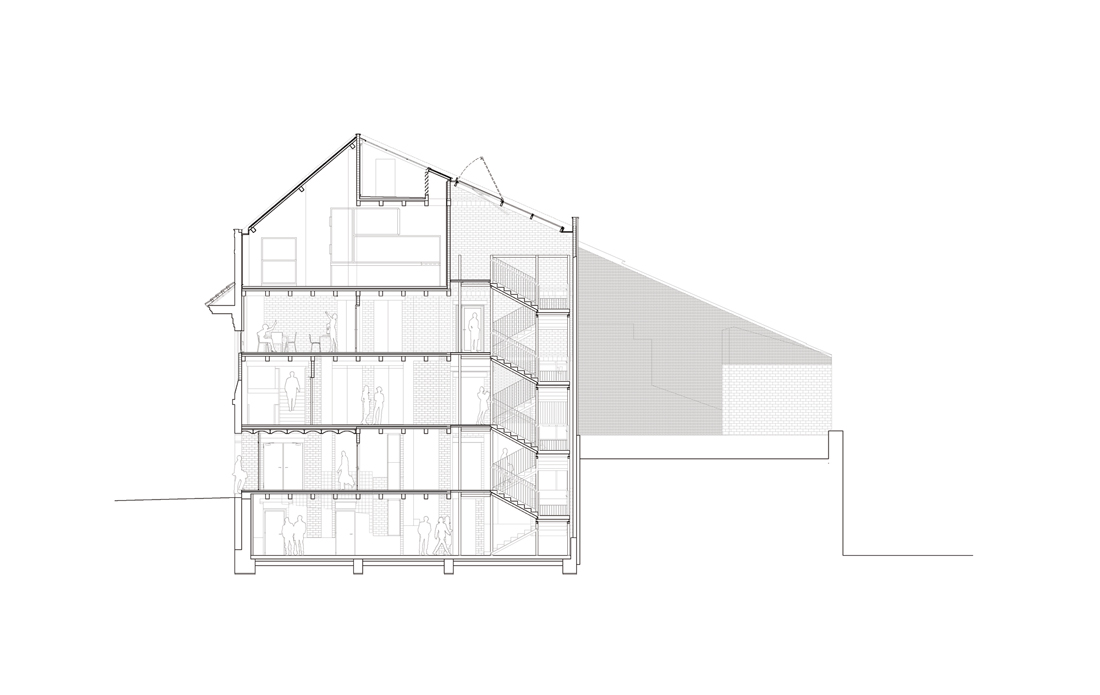