The project consists of three housing building on a foundation of business premises. It is articulated by a landscaped garden with vegetal and mineral nuances.

We believe that “beautiful” housing accommodations are bright, well-oriented and offer wide views. This is what we have planned for the three buildings with views to Nantes city or to the river. We used the same codes and registers with small changes for each project. The aim is to distinguish each entity while having an overall unity. Thus the limelight of the housings through their outside extensions (such as loggias and terraces), put into the light buildings from public spaces. The intrinsic quality of the housings draws the facades. The architecture emphasizes the use and the opportunity offered by the housing. We did not want a demonstrative architecture, but rather an architecture that invites you to move in.

We are particularly interested in the orientation of housing. Thus the vast majority of the flats has a Southeast or Southwest exposure. And most units have a double crossing angle or orientation. The slenderness of the corners’ buildings forms two “towers” that ends the plot and touches Picasso’s alley, even though the below central building connects with the garden.

Our objective is to design a thin and slender tower. We played on the movement of stabs with systematic overhangs and rhythms to create a dynamic tower… The shape of the tower remains on the other hand compact and regular. Thus, we can read two towers (6.50m by 55m. high). 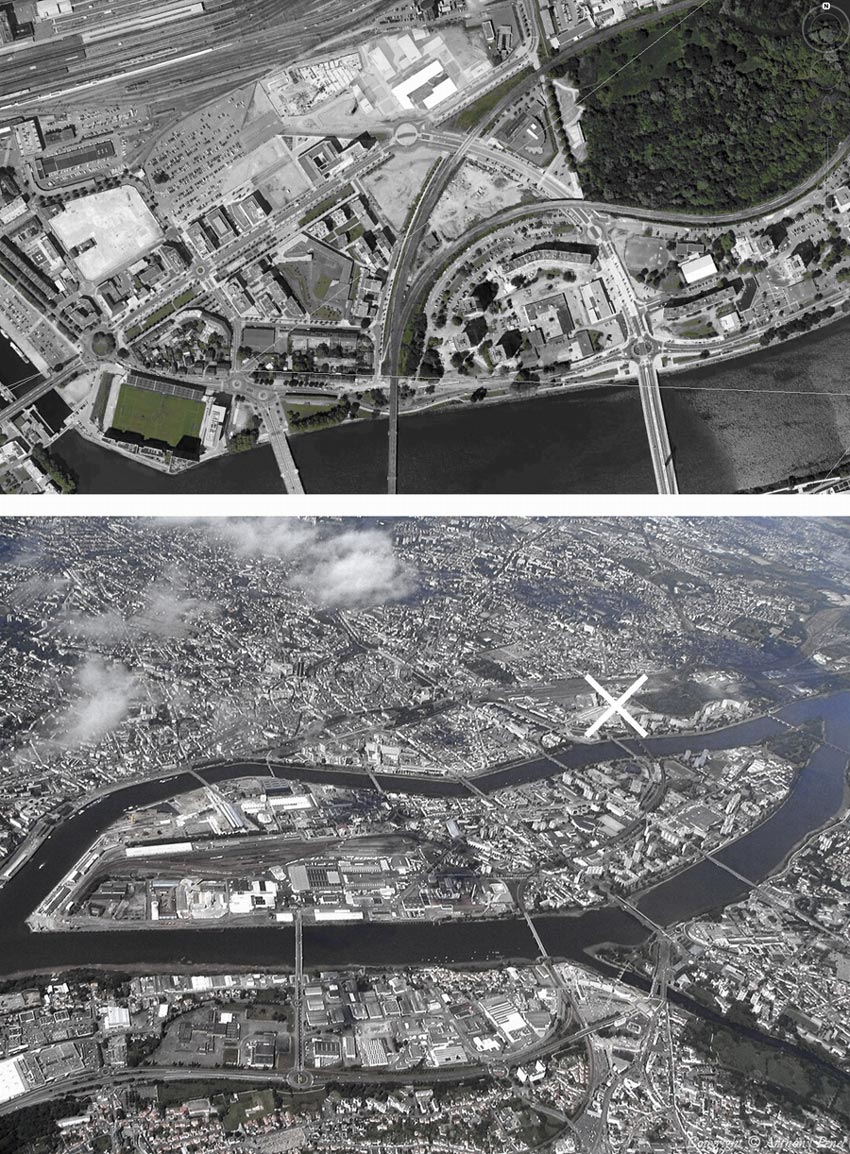 The project take advantage of the situation and the configuration of the parcel :

– Belonging to the geographical entity the “Prairie Mauves”.

It offers a shelter area, a wet meadow planted with willows that borrows from its neighboring Little Amazonie’s atmosphere and terms of approach :

– Plant expansion and humidity, variety of textures and colors.

– Distance perception (from the street, the “dock” the “wedge”, the floors).

ILOT 3B, Project into the Pre-Gauchet ZAC

Along the Loire, just a few steps from the city centre, a large public housing made of curved bars (“Bananas“…) and tours: the Malakoff borough.

In between railway and road embankments, Malakoff is a recognized enclave “from outside” with its long or high emblematic buildings.

Between Malakoff and the historic center (Castle of the Dukes of Brittany, Cathedral …) characterised by a short physical distance but a tremendous mental one: The Pre-Gauchet, semi-wasteland railway area studded with hangars on the South side of the railway station, is an urban no man’s land which completes the insularity of Malakoff.

The sources of the urban project….

In 2001, GCP was launched, Grand Project for the City whose purpose was the urban renewal of the whole lot and its connection to the city center via the Pre-Gauchet.

Pre-Gauchet becomes an industrial borough, and became known as the “Euronantes Gare”, Nantes’ district in the making, at the South gates of the TGV train station, suitable to tertiary implementation as well as residential development.

Both Pre-Gauchet and Malakoff are associated in the Grand Project for the City under the name “New Malakoff” clearly stating the will of the Urban Community: Pre-Gauchet i.e. Euronantes train station will connect Malakoff to the city….

The urban project must do its utmost to achieve this objective.

There are two ways to connect Malakoff to the city: by road and by sky.

Firstly, Malakoff needs to become a public with respect to the city codes: street address, lightings, parks, gardens, school courts, connection to the structuring mesh (continuities created under railways, bridge over the river): an opening to the Loire…

Secondly, do not level Malakoff for its skyline to equal the one of the city but identify Pré-Gauchet with its own towers.

Finally, whether the “tower” rises and offers a wide field of view to its inhabitants regarding an urban landscape with some beautiful views (the Loire, the “Little Amazon”, the Nantes’ horizon and its sky in motion …), it must also be the ground of the city. This challenge is particularly highlighted in the urban project Malakoff / Pré-Gauchet. The ground of the urban passer-by (pedestrian) is a priority and the emergence of verticality should not come as a brutal burst into the passer-by’ world: parking, technical rooms, foundation, rescue equipment… Building ground floors is therefore subject to special requirements, which aims to put wandering and transparency, depth, activity, porosity into the “pedestrian space” (streets, sidewalks).