Designed by Jean Nouvel, La Marseillaise marks a real turning point for the Mediterranean city of Marseille. Not only does this 135-meter office block demonstrate architectural and technical prowess, it is also a sustainable economic and social project.

La Marseillaise will have 35,000 m² of office space, thereby providing the city with a professional property vital to any metropolis with international aspirations.

Although La Marseillaise is an office building, it is much more than a simple real estate operation. The tower has emerged as the symbol of a new aspiring neighborhood: by joining a skyline already formed by Zaha Hadid, La Marseillaise becomes a reference point for the inhabitants of a former industrial zone that, just 10 years ago, was referred to as “challenging”. Bordered by two superelevated highway ramps and the port terminal for ferries on the Mediterranean, the coastline of Marseille is undergoing transformation – from a place for passing through to a commercial and residential quarter served by the tramway. This metamorphosis of the urban fabric of the city forms part of the projects supported by Euroméditerranée (Euromed), an enormous operation to reclaim southern Europe, which has played a highly active role in the regeneration of Marseille and notably its coastline. 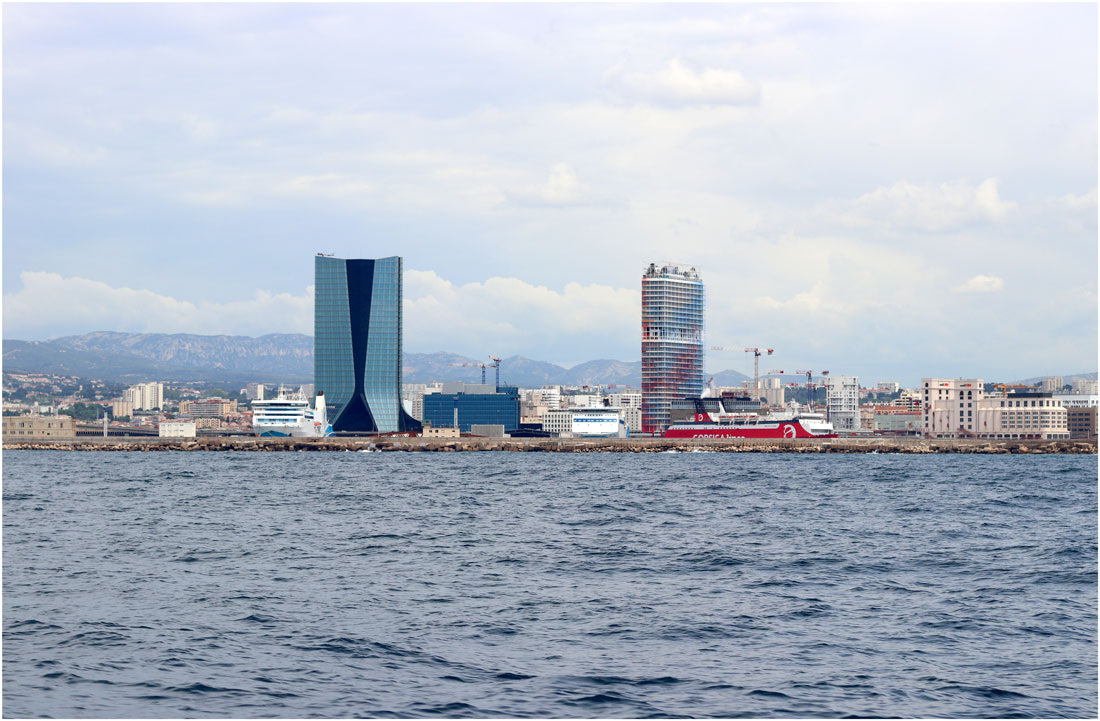 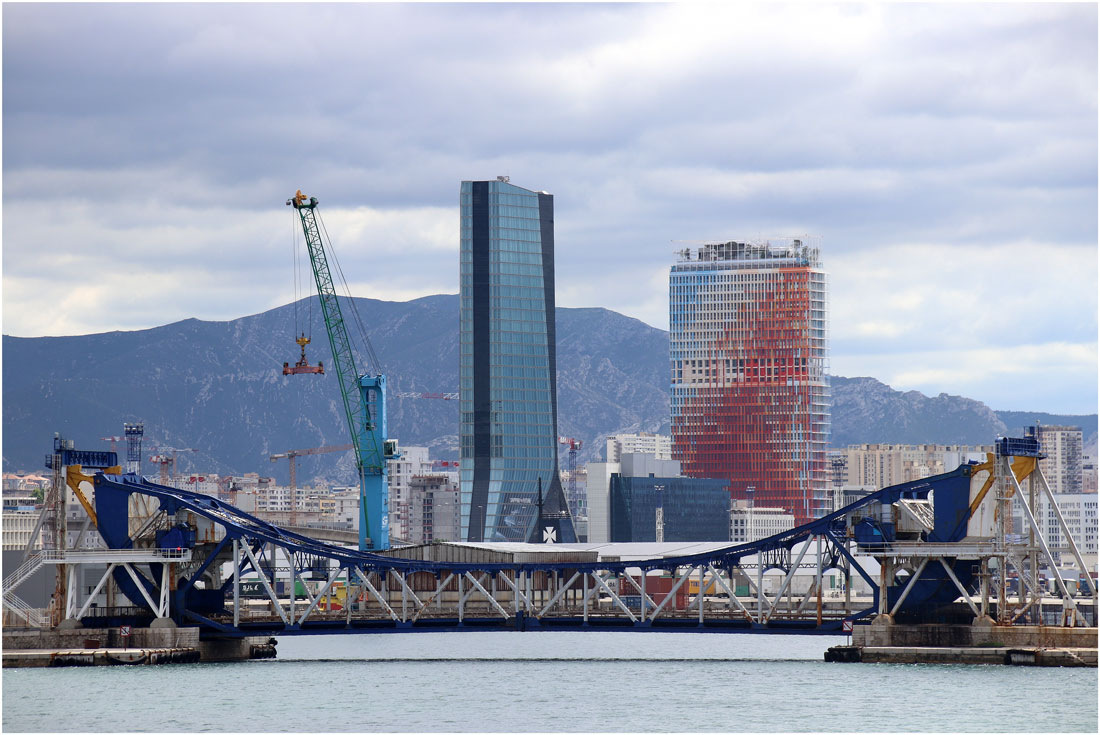 Unlike Zaha Hadid’s tower, which acts as the headquarters of the world’s leading maritime transport group, CMA CGM, delivered in 2011, La Marseillaise will not be reserved for just one company. With 12 floors already claimed by the urban community, Jean Nouvel’s tower will host nine tenants and receive visits from professionals from other companies, who will be received in the building for meetings. Facing the sea, the tower suggests an openness to the exterior that is not merely allegorical. La Marseillaise seeks to be a place that is experienced by the inhabitants of the region.

Just like Pouillon, Le Corbusier and Ricciotti before him, Jean Nouvel is fascinated by the landscape of Marseille and the surrounding countryside. This initial fascination can be seen in the way in which the architect uses high-performance concrete. As for the backdrop of the Marseille landscape, this has played a determining role in the design of the project. La Marseillaise embodies the desire to build a tower that draws the eye without compromising the panorama.

The façades are made from concrete painted in 30 shades, with the gradation of colors lending the construction a singular depth. The awnings integrated into the façade make it possible to opt for clear glass, an undeniable advantage for the users, who will thereby be able to benefit from the natural Mediterranean light, which will enter their offices without being altered by the tinting usually employed in this context.

Borrowing from the approaches typically used in optical and kinetic art, from a distance the 30 colors of the façade will create an optical illusion as the tower blends in to either the sky or the ocher of the Marseille roofs. Conversely, on approaching the tower, the shades and the morphological complexity of the façades will be fully revealed. 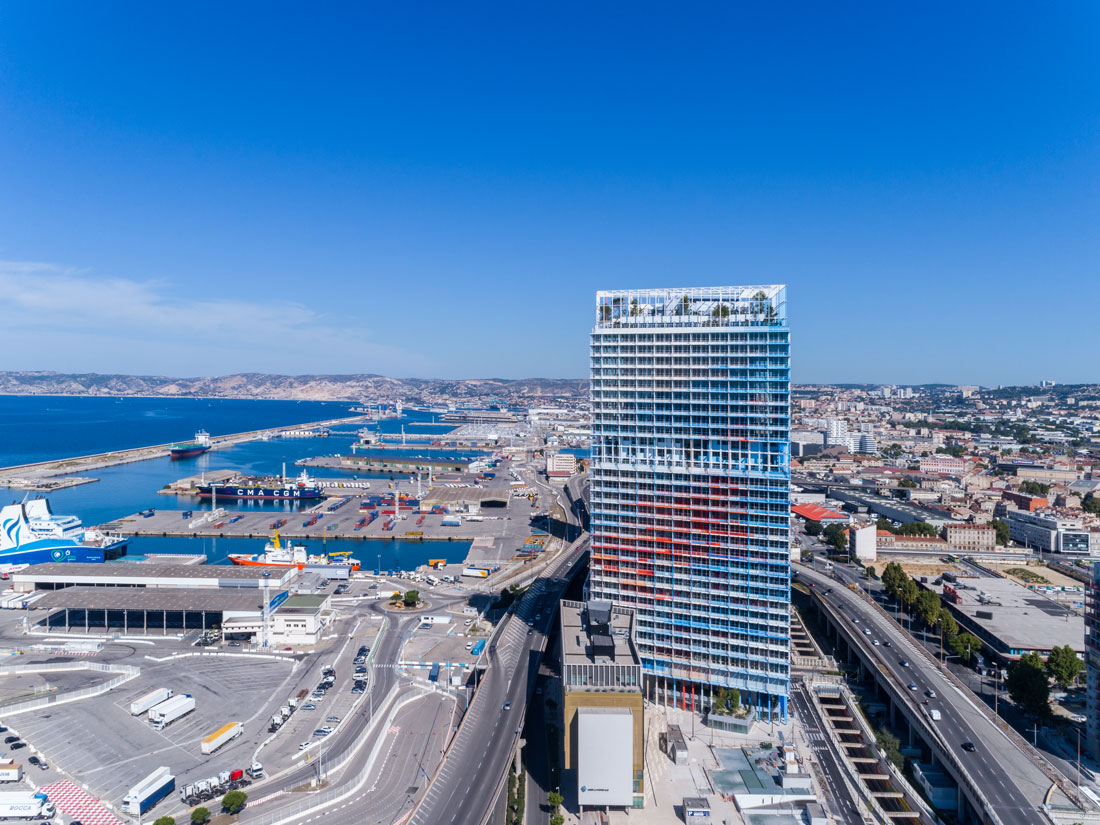 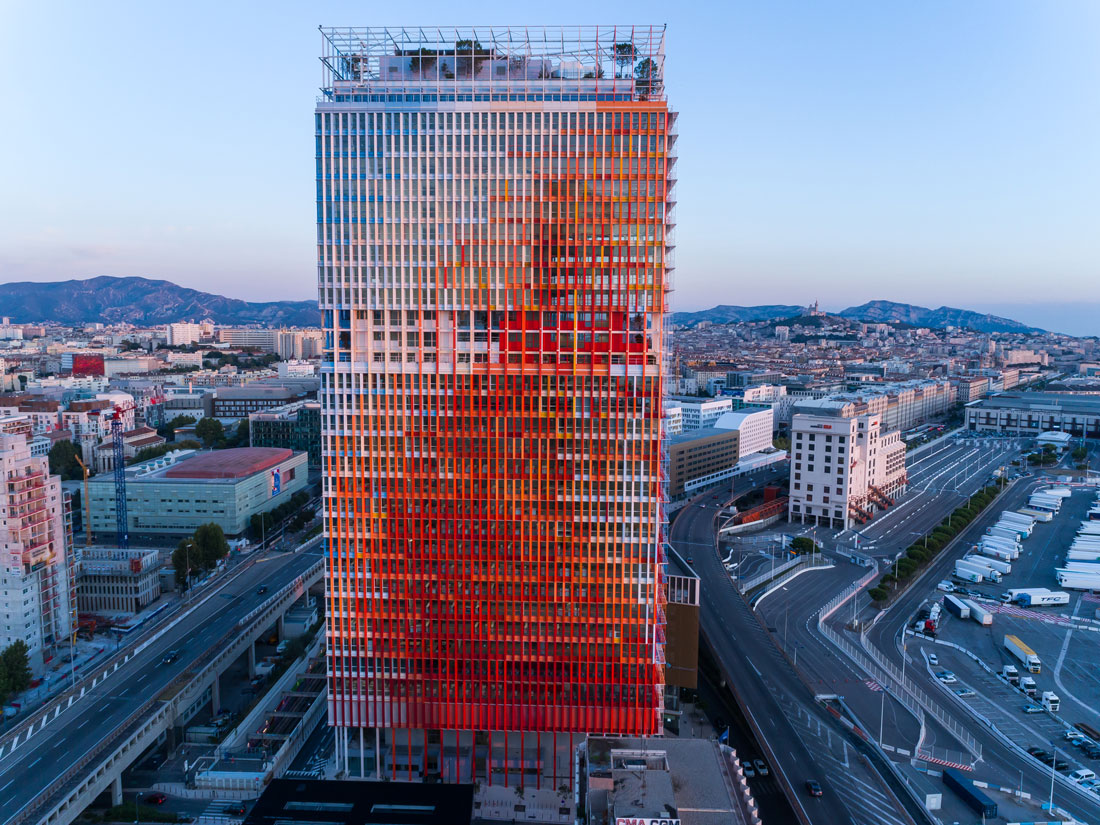 La Marseillaise has been designed to meet the most up-to-date international standards in terms of planning as well as the environment. In this way, the tower has confirmed its position at the cutting edge of sustainable development by aiming to achieve, for the first time in France, environmental excellence, with “Excellent” HQE® and LEED Gold environmental certifications, promoting the rationalization of operating costs and real competitiveness in terms of cost per workstation.

In addition, the tower is connected to the Thassalia marine geothermal power station launched by Cofely, a subsidiary of GDF SUEZ, making it the first high-rise building to harness this type of technology, which will use marine termal energy to cool the building. This modern, economic and sustainable solution will make La Marseillaise one of the most high-performance towers in France.

A building designed with the environment in mind, high-performance equipment and resolutely sustainable materials are the assets of La Marseillaise that make it a project respectful of the environment.

As Didier Brault, the site manager for La Marseillaise, explains, the tower air-conditioning system is connected to a seawater loop that takes water directly from Mediterranean, making it possible to use existing cold water without the need for excessive electricity consumption. This is an innovation for the city of Marseille. As for heating, the building is very well insulated, with the loss of heat and energy limited as much as possible. The tower also has solar panels, which chiefly supply the company restaurant.

Reusable materials were used for the La Marseillaise project, notably eco-certified concretes, which are ecological concretes produced by reusing waste, as well as the ultrahigh-performance fiber-reinforced concrete (UHPFRC) produced by MED PREFA in Marignane. The external awnings were made from a material called Ductal, developed by the Lafarge group (this was also used in Marseille for the decorative mesh that covers the Mucem building). This material is rarely used for façades, and in the case of La Marseillaise, it is the first time that the material has been used to create a sealed, refractory façade. Numerous tests were performed before the use of these innovative materials was definitively confirmed. 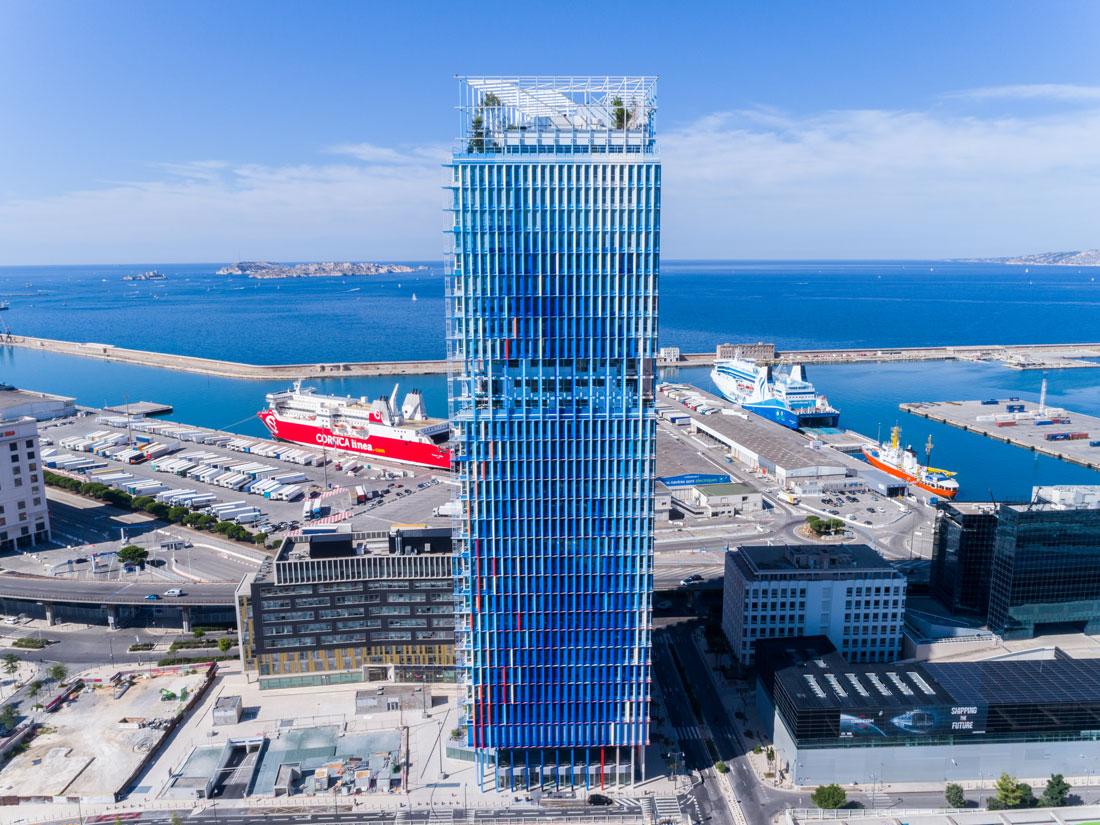 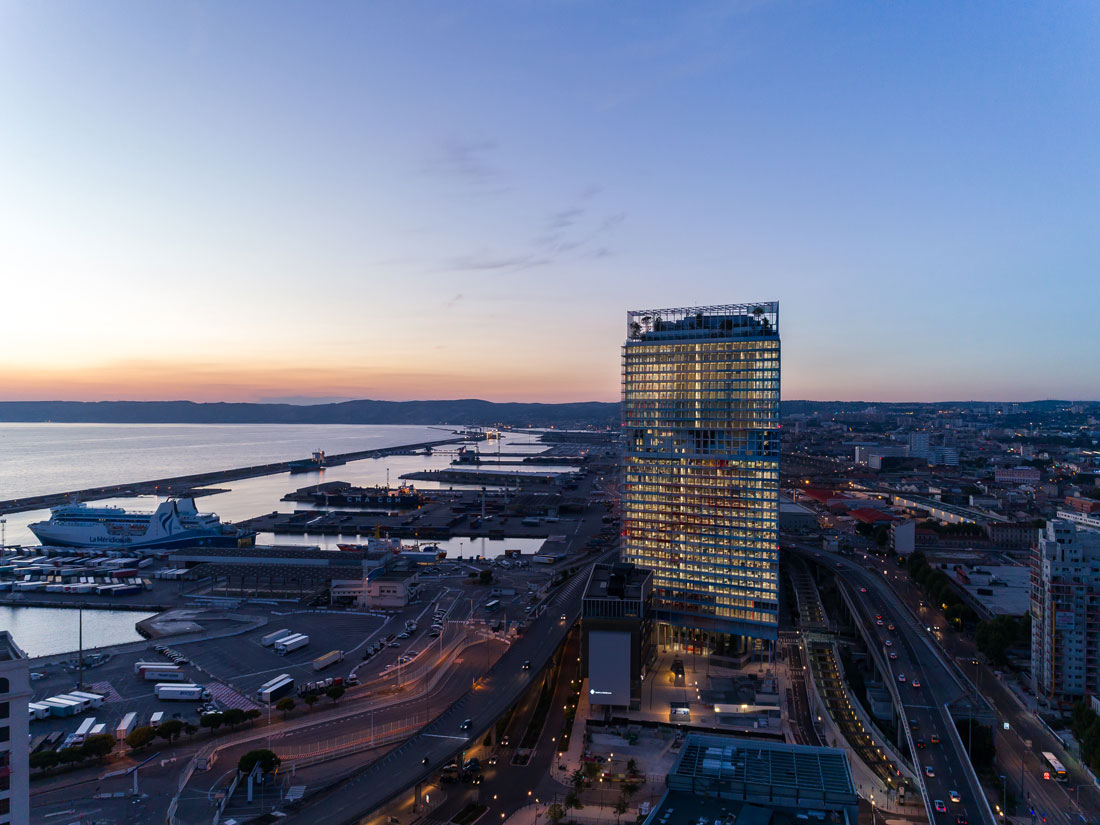 Numerous services will be offered to the users of La Marseillaise, ensuring it meets international standards.

While the design of the building has never lost sight of the needs of local residents, it has also taken into account the quality of life of its tenants. By providing specific facilities to ensure a comfortable working environment in the digital era, La Marseillaise favors ownership of its spaces by its occupants, who will have access to a restaurant as well as a company daycare center, located on the third floor. The comfort of tenants has been taken into consideration in the design of these services: the restaurant is located on the second and third floors, at a height of around 20 meters, and most importantly, facing the sea. Sensitive to the way in which working habits are changing, the tower offers a range of spaces that can be used by the same person at different times of day.

The building offers great flexibility of use. Comprising platforms that can be arranged according to tenants’ needs, the structure is designed to present the fewest possible limitations. The developer required platforms measuring 1,200 m² for each level, an optimum size for offices. In order to further accentuate the link between the inside and outside, Jean Nouvel designed colored ceilings as a continuity of the façade. The principle of transparency and openness suggested by the tower’s structure has also been naturally adopted by the future occupants; the occasional partitions added to the spaces are nearly all made from glass. 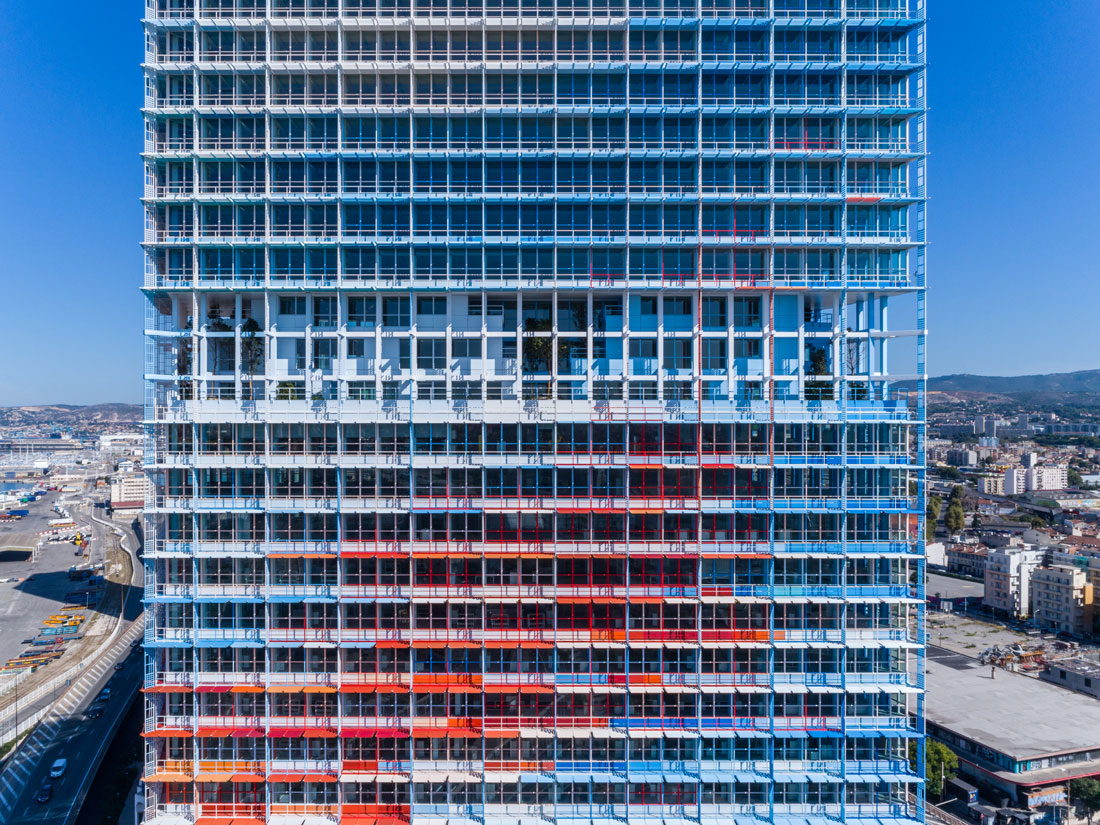 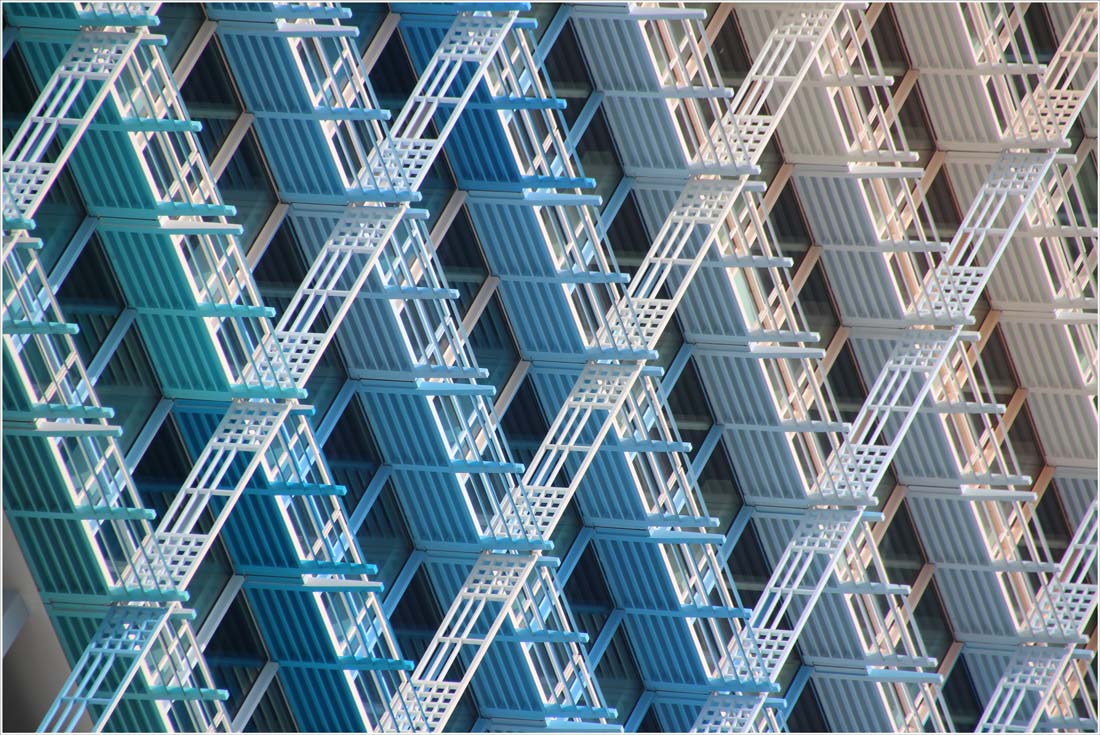