Recovery of the Access to Jorba’s Castle: As if Nothing Had Been Done

The remains of the Castle of Jorba, declared a historical monument (BCIN), are located at the top of Puig de la Guàrdia (549m), forming a backdrop for the municipality of Jorba and a privileged overlook onto the Catalan region of Anoia. The whole castle represents a sedimentation of the different uses that it has acquired throughout the centuries. The first construction, the mid-10th century watchtower, was joined by a chapel, which later became part of an initial walled enclosure in the 14th century. At the end of the 16th century, the complex expanded, arriving at its maximum extension on the hill. In its final functional phase, the castle became a house: domestic elements including an oven and a wine press can still be seen today. The project is part of a Master Plan to raise collective awareness of the castle’s origins as a lookout for controlling the former border territory of the March of Barcelona, a defensive barrier between Al-Andalus and the Carolingian Empire, and for controlling the ancient road linking Barcelona to Lleida.

Relationship with the site

The purpose of the intervention is to provide access to the watchtower, where the relationship with the town and the territory is recovered, highlighting the original lookout function that motivated its construction. The project is carried out using the material removed during the archaeological excavation, which is reused in order to build a new topography. The 300 m3 of extracted soil volume is used entirely to generate a sequence of platforms that expands the route to the lookout, making it more secure. 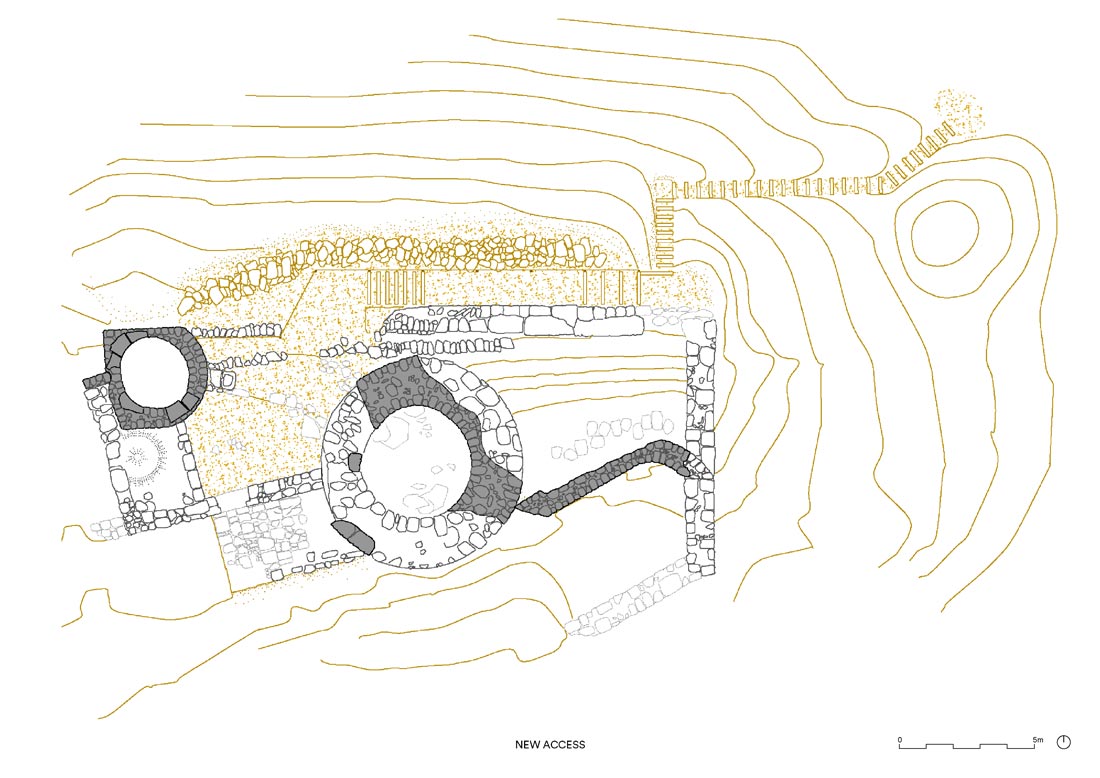 An ascending step of 12 meters is proposed across five sections of two different widths, adapting to the pre-existing conditions and following the structures that mark the castle’s limits. An old existing path is used as a route for the first two sections of the new access. The third section is perpendicular to the walls of the castle and offers a view of its north elevation. The last two sections run tangent to the main guideline of the walls and allow for direct contact with the archaeological remains. Once you reach the upper level, you get a view of the village of Jorba and the old royal road.

The archaeological intervention unearthed structures from the castle’s different stages. These are consolidated, reusing stones found during the excavations, allowing for the recovery of part of the castle’s extension, walls from the initial phases of construction, as well as the circulation levels of the battlement. The stones recovered during the excavation that were not used in consolidating the most damaged structures have been collected next to the path, waiting to be reused in later phases.

Due to difficulties in accessing the top of the hill, the works have been carried out entirely by manual means using materials that were easy to handle and transport. A minimal intervention was proposed, understanding that the pre-existences of the castle and the landscape are the heart of the design. The new staircase consists of 20×12 cm wooden slats in two different widths (1.20 and 0.60 meters), optimizing the original pieces without generating waste. The access limits are indicated by a rope at 60cm in height, which indicates the route and the areas that can be visited, held by eight corrugated rods of 12mm in diameter.