Into the Hedge: Temporary Landmark

As one of the J. Irwin and Xenia S. Miller Prize recipients of the second edition of Exhibit Columbus, SO – IL took on the preservation effort at the Miller House and Garden and turned it into a temporary landmark for play in the city of Columbus, Indiana. 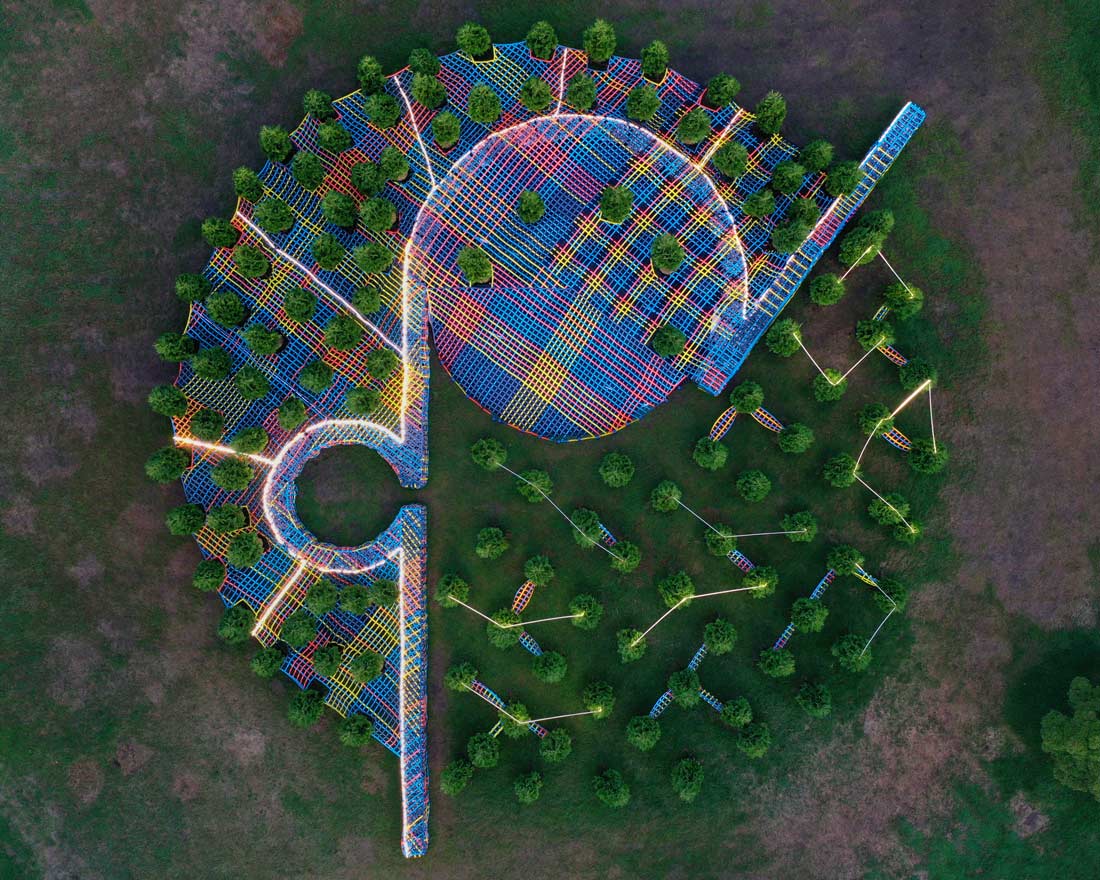 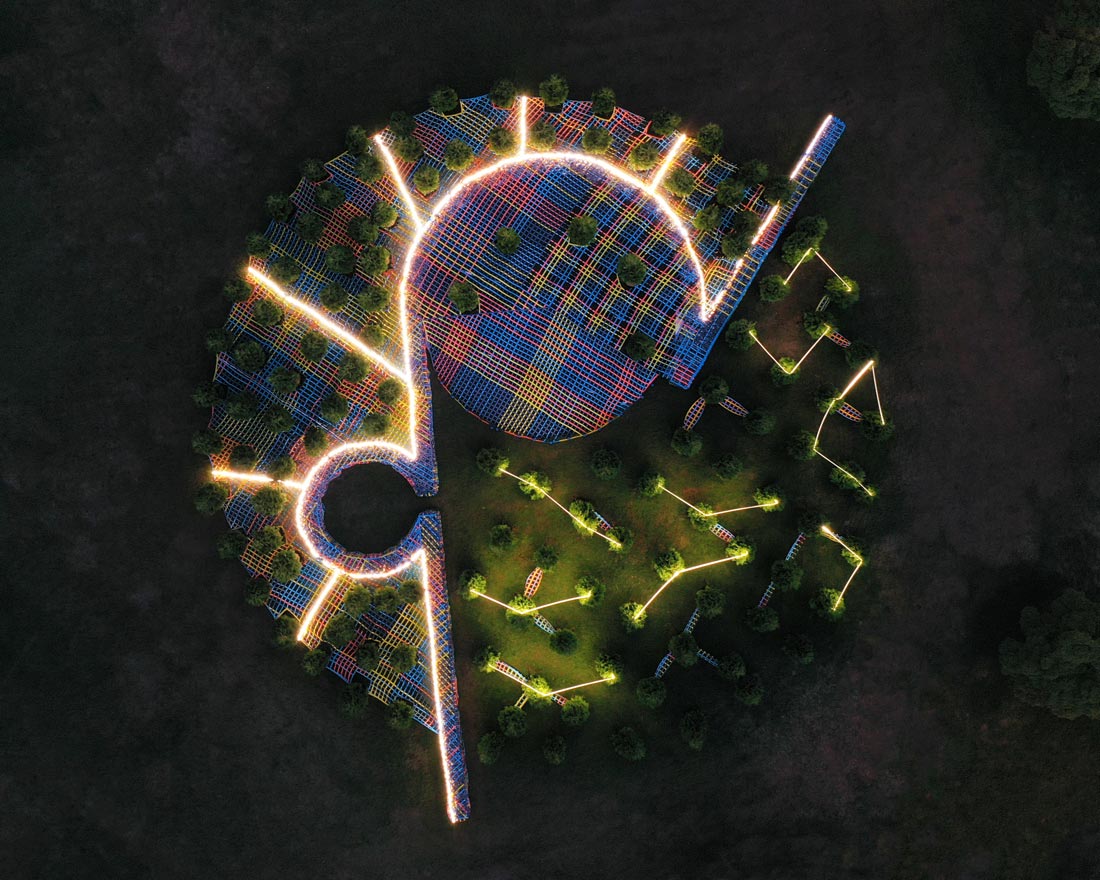 The arborvitae hedgerow at the Miller Garden is a modern icon of landscape and architecture. While the glass walls of Saarinen’s Miller House disappear – erasing the boundary between inside and outside – the densely planted hedgerow on the perimeter defines a hard edge to the site between the streets and the private grounds of the Miller residence. 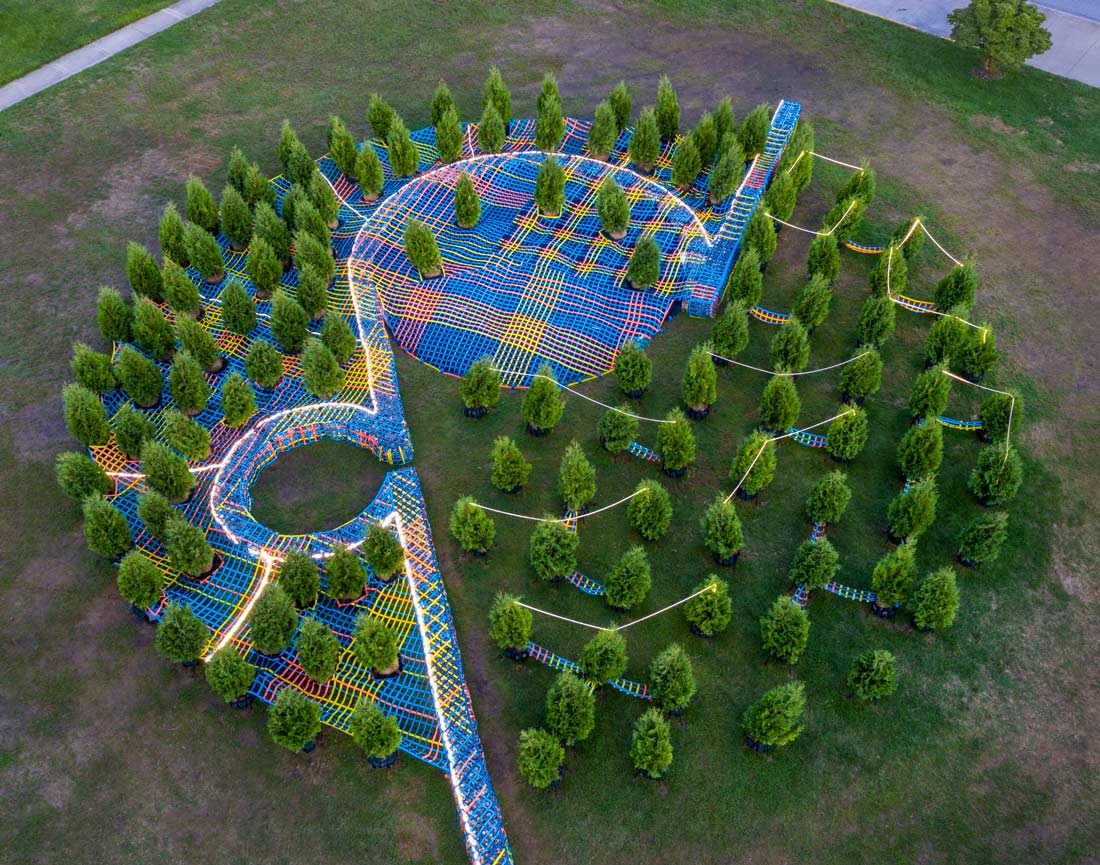 The 70-year-old arborvitae trees are due to be replaced. It was an opportunity for a project to create a different and more engaging relationship with this modern icon.

In partnership with the Miller House and Garden, SO – IL procured 130 living arborvitae trees and placed them in a large hammock structure on the lawn of the Bartholomew County Courthouse. After the exhibition the trees can be permanently planted in the garden, making a direct link between the installation’s original architectural inspiration and a contribution to the stewardship of one of Columbus, Indiana’s seven National Historic Landmarks. 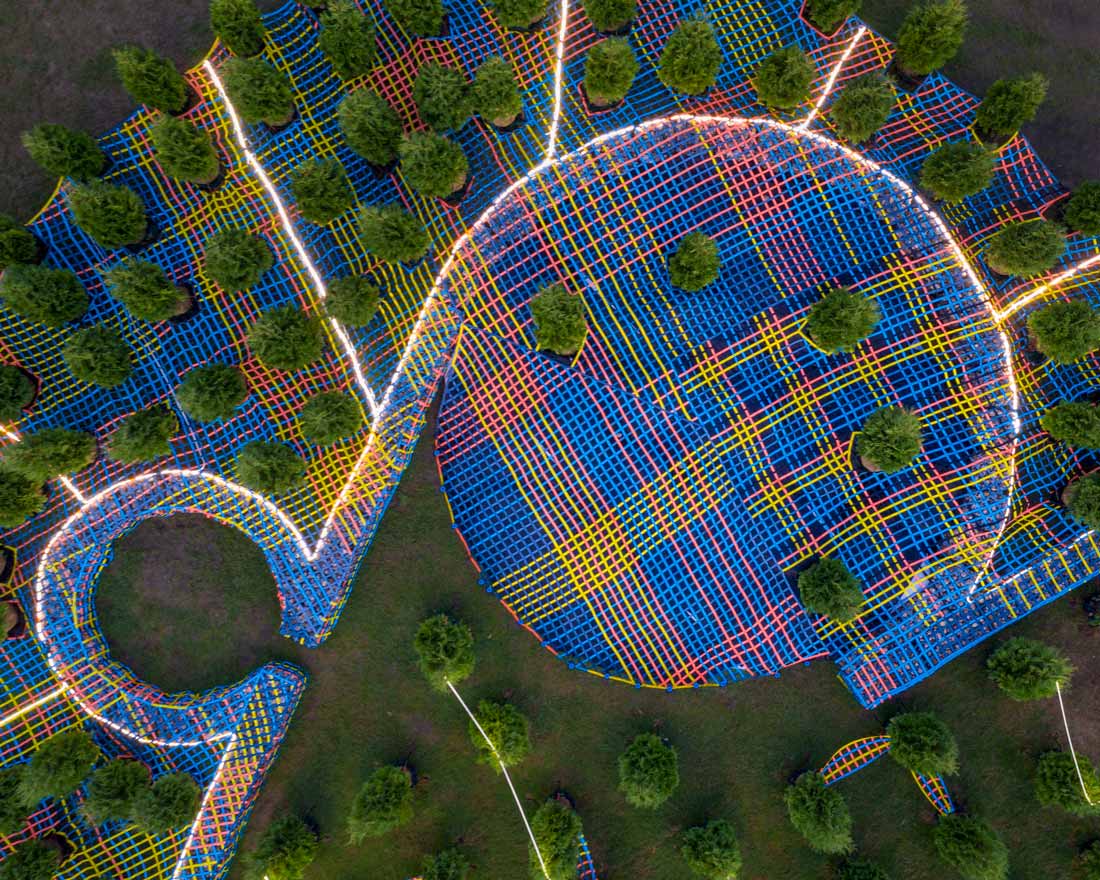 The oversized hammock is made by hand with nylon webbing – its color taken from the color palette Alexander Girard developed for the dining chairs at the Miller House. Through a partnership with Indianapolis’ People for Urban Progress, the net will go on to become a series of handbags and totes or even beach bags. 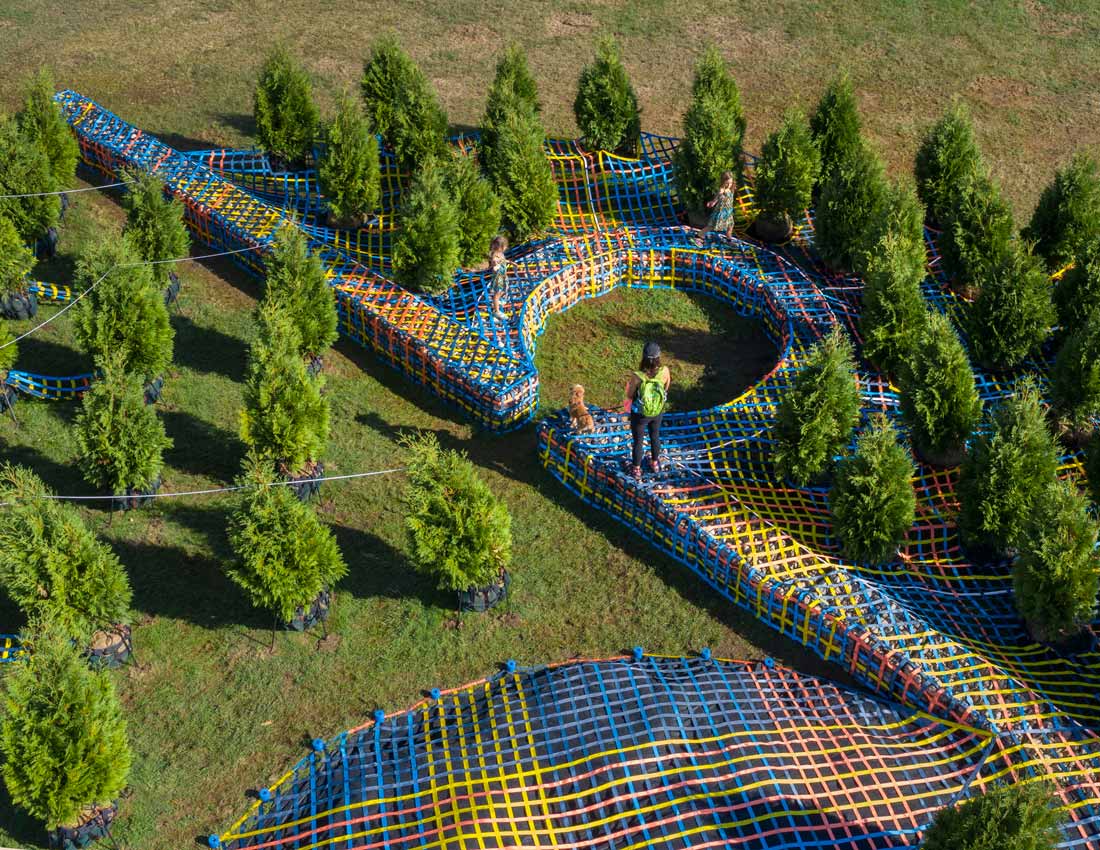 For the other components of the installation, simple off-the-shelf agricultural and construction materials were used to ensure that everything could have a life afterward. The gabions, mulch, limestone and stakes that comprise the planters and central pathway will all be recycled into local infrastructure projects. 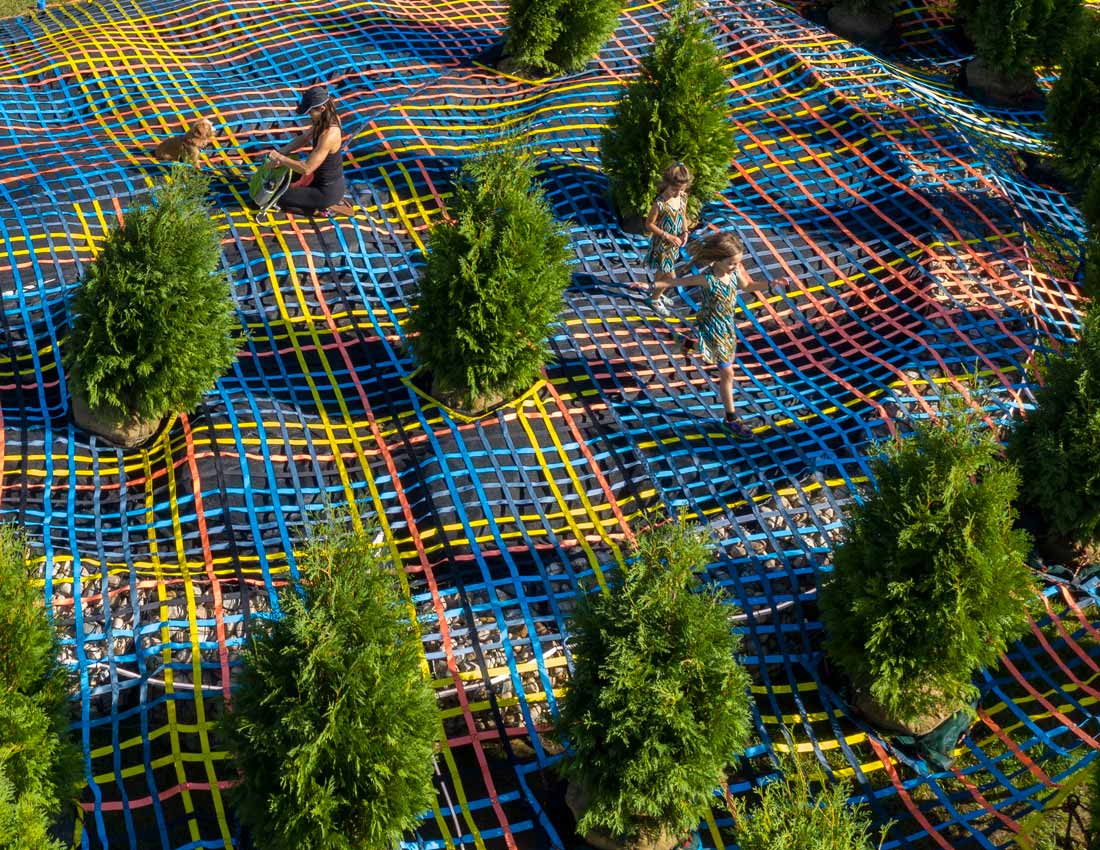 Committed to taking a critical approach to preservation and material use, “Into the Hedge,” temporarily reorganizes the elements of local construction and landscape as well as recognizable modern architecture into a memorable experience and a new landmark.