The 38 social housing units at 10/12 rue Bonnet in the city of Clichy-la-Garenne completed for Efidis (social housing promoter) are located on the doorstep of Paris, along the périphérique beltway. At the edge of the capital and its inner suburbs, they look toward both the Clichy-Batignolles district and the new high court designed by Renzo Piano, as well as the greater Paris area. Inside and out, they embody the metropolitan goal of eliminating borders. The architects seem to have laid a roadmap to relay the dynamism that characterizes the urban development zone of Batignolles in a disparate environment. It is this double relationship with the city dictating the physiognomy of the building that seems to transcend the limits of the périphérique to connect two different urbanities toward a common future. 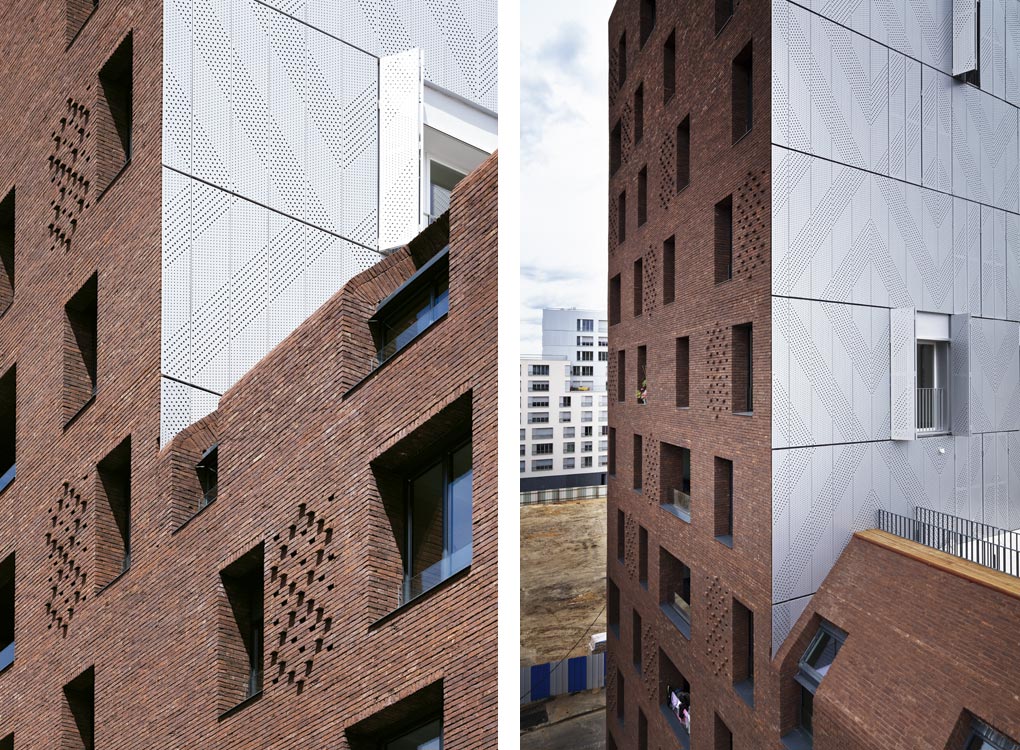 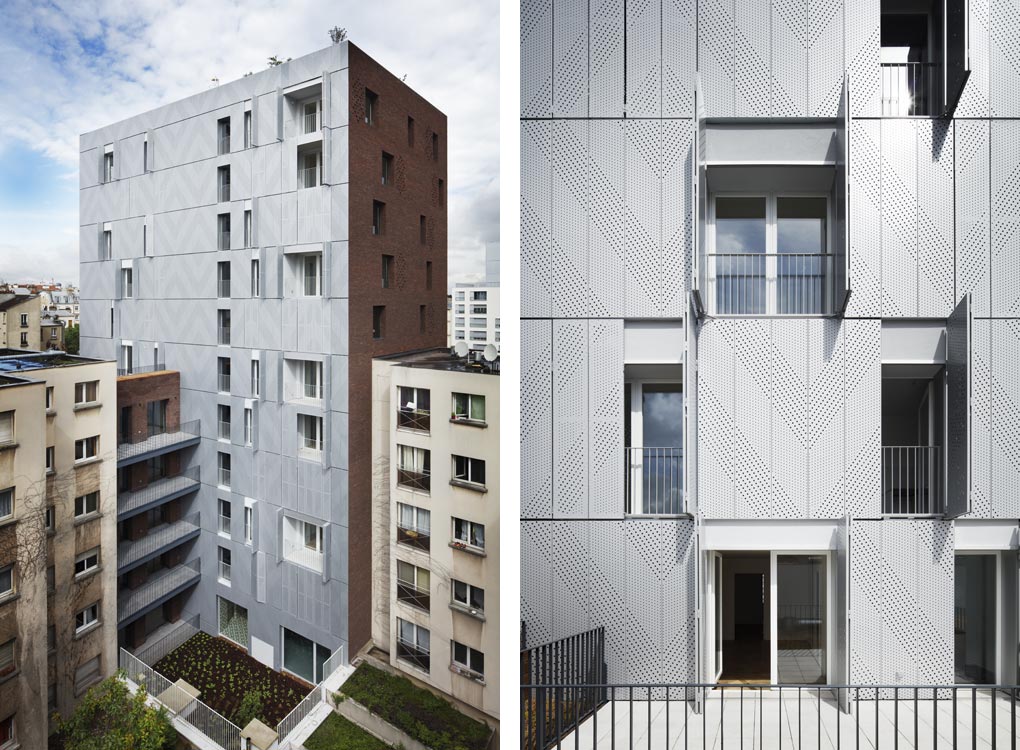 The multi-family housing building sets a unique standard for a new neighborhood, which will mark the threshold of Clichy-la-Garenne, the aptly named urban development zone of “entrance to the city”. Buildings can rise as high as 10 stories, allowing for views overlooking a large part of the surroundings. Through this emergence it approaches Paris and its attempts of achieving great heights. The southeast façade of perforated metal vibrates with its louvered shutters and echoes the activity of the city and the speed of the périphérique.

Located on the elbow of Bonnet street, the building takes part in the composite fabric of Clichy-la-Garenne, starting with its streets and its numerous buildings in different colors of brick, which have emerged over time. To begin this dialogue, the northwest and southwest façades feature a dark red ‘Lucca’ brick with vivid joints which, in addition to giving its name to the residence, creates the building’s resolutely contemporary look.

To render this brick façade even more vibrant, an array of ornamentation connects two expressions of the city: the capital and the suburbs. A motif in Art deco tones, two crossing diamonds, is created from the overhanging and recessing of brick headers on one side and through large-scale metal perforations on the other. On the ground floor facing the street, the façade alternates large spans of brick with glass-covered surfaces such as the entrance and the commercial space. The moucharabiehs, attained from the spacing between bricks, roam to create intimate spaces or ventilate premises with a transparency that only allows sight lines from certain angles. The hall, in turn, acts as a transition between the exterior and the interior by allowing views from the sidewalk into the garden at the heart of the lot.

The units also entertain this ambiguity of rapport to the larger scale of the city or the intimacy of the street by opening onto the heart of the lot through balconies and loggias, which hide behind the perforated metal, or through loggias cut into the brick surfaces facing the street. Each apartment has at least a double exposure: by multiplying the exposure of each unit, the project transforms the natural light contributions in order to connect the interior with its environment. This also multiplies the viewpoints out onto an ever-changing city that builds upon itself and extends its borders to regenerate its identity. 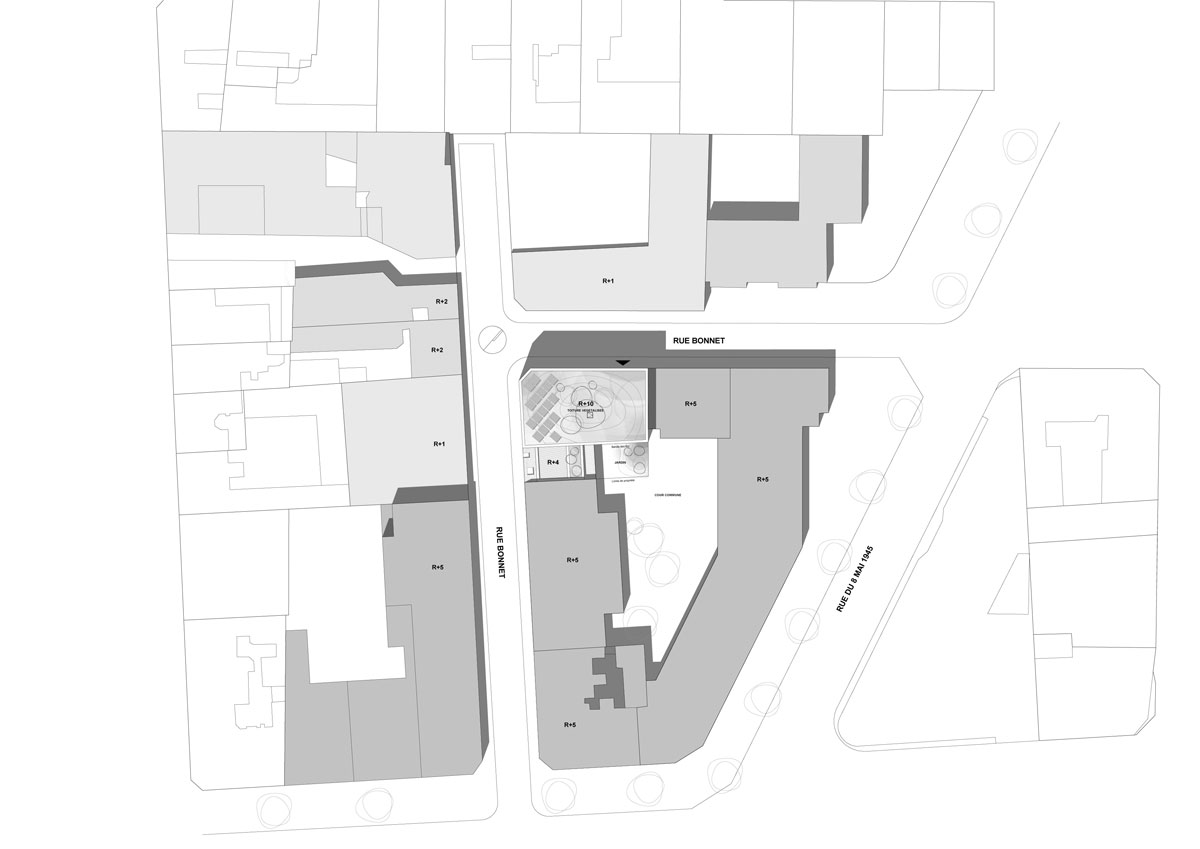