A house between party walls is a project sensitive to the inhabitant and the city.

The architect Josep Ferrando resolves the complex urban conditions of the context and the site in which the house is located – the plot is less than 5 meters wide and with a particular topography between two streets situated at different heights – by starting the conception of the project with the shaping of the volume. 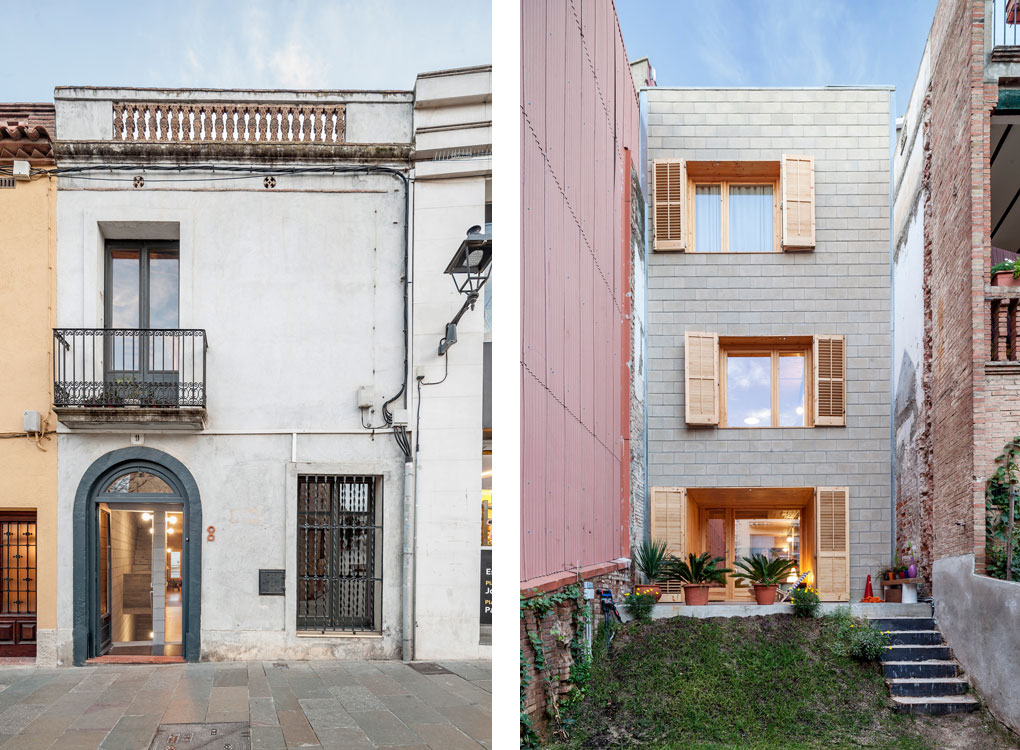 The solution he developed consists of inserting a new house made of concrete blocks inside the pre-existing home positioned between two thick walls dividing it from the neighbouring houses. In this way, three volumes are generated: one serves as a storage space, another is dedicated to circulation, and a third one articulates the living spaces that compose the building. 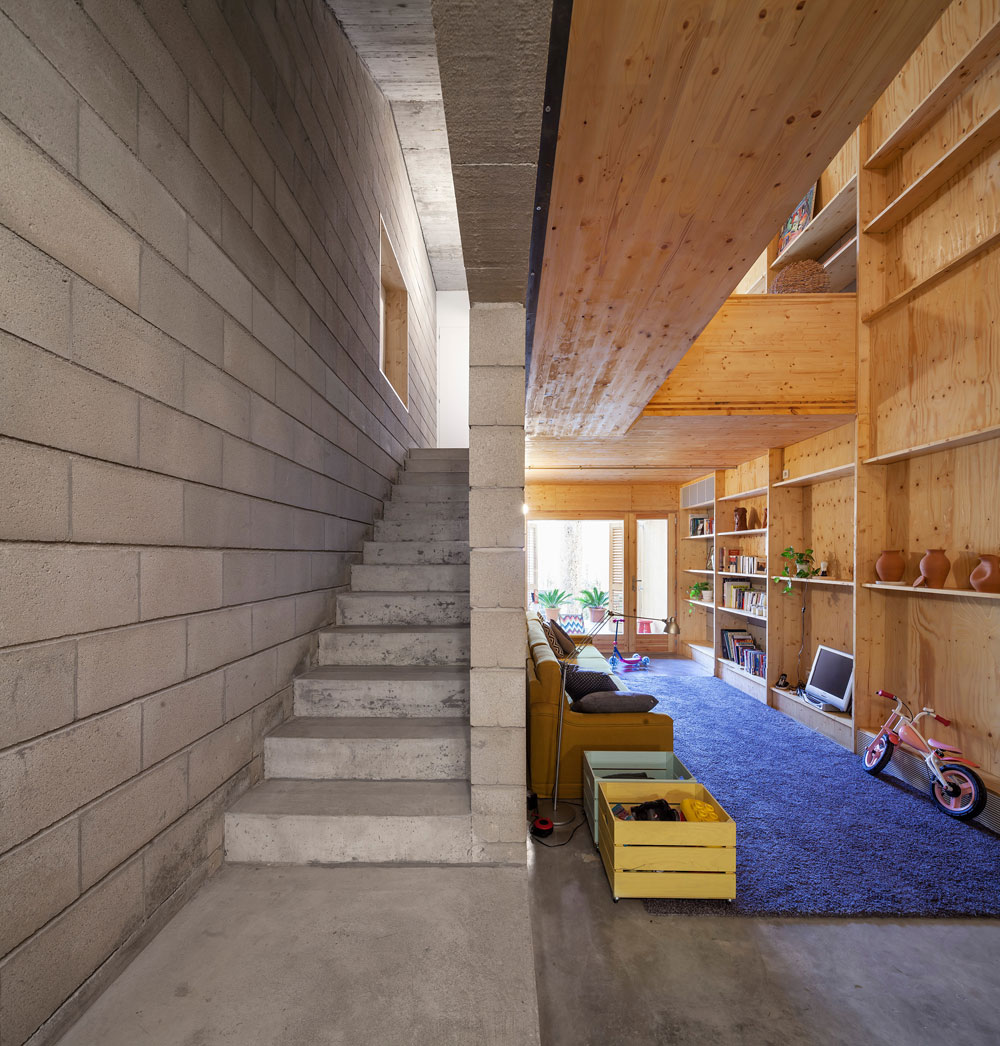 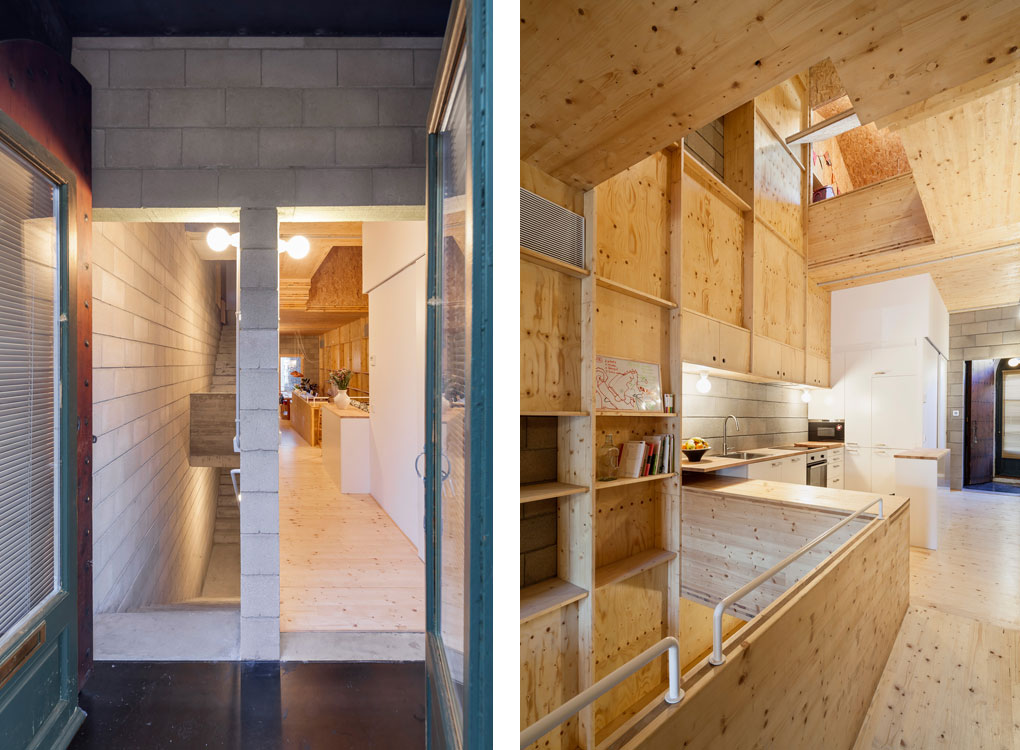 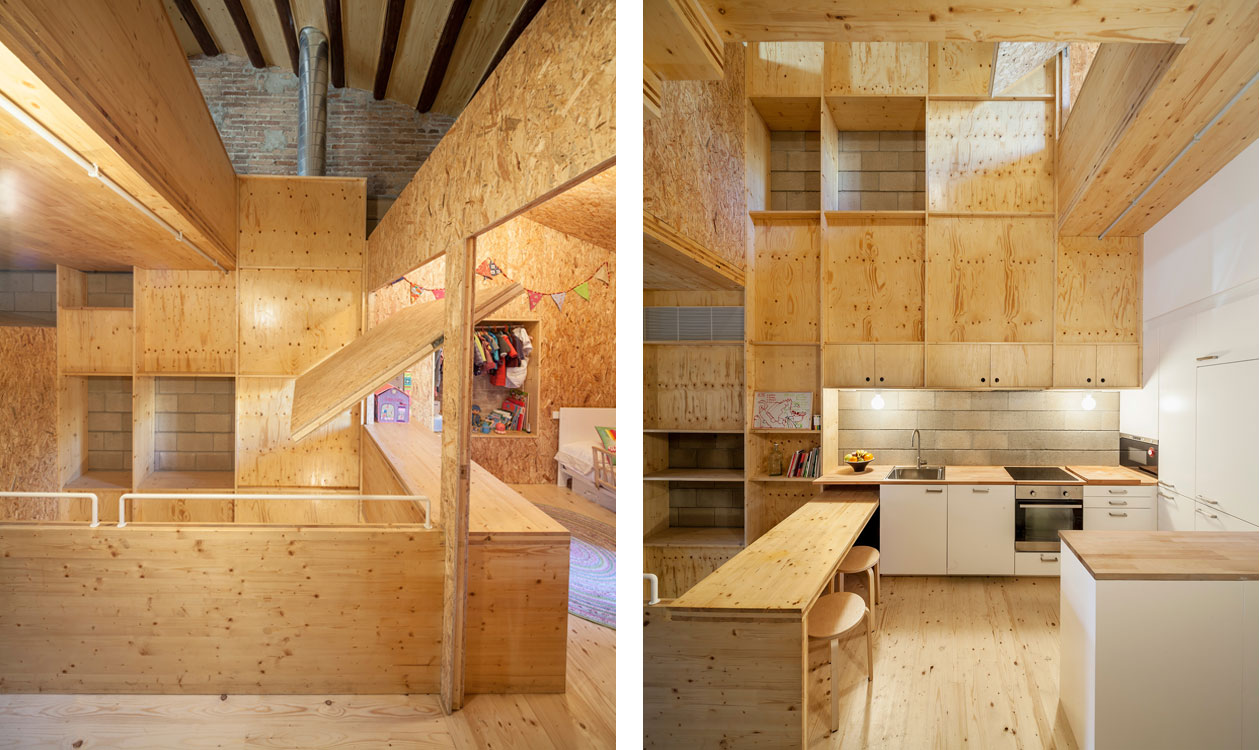 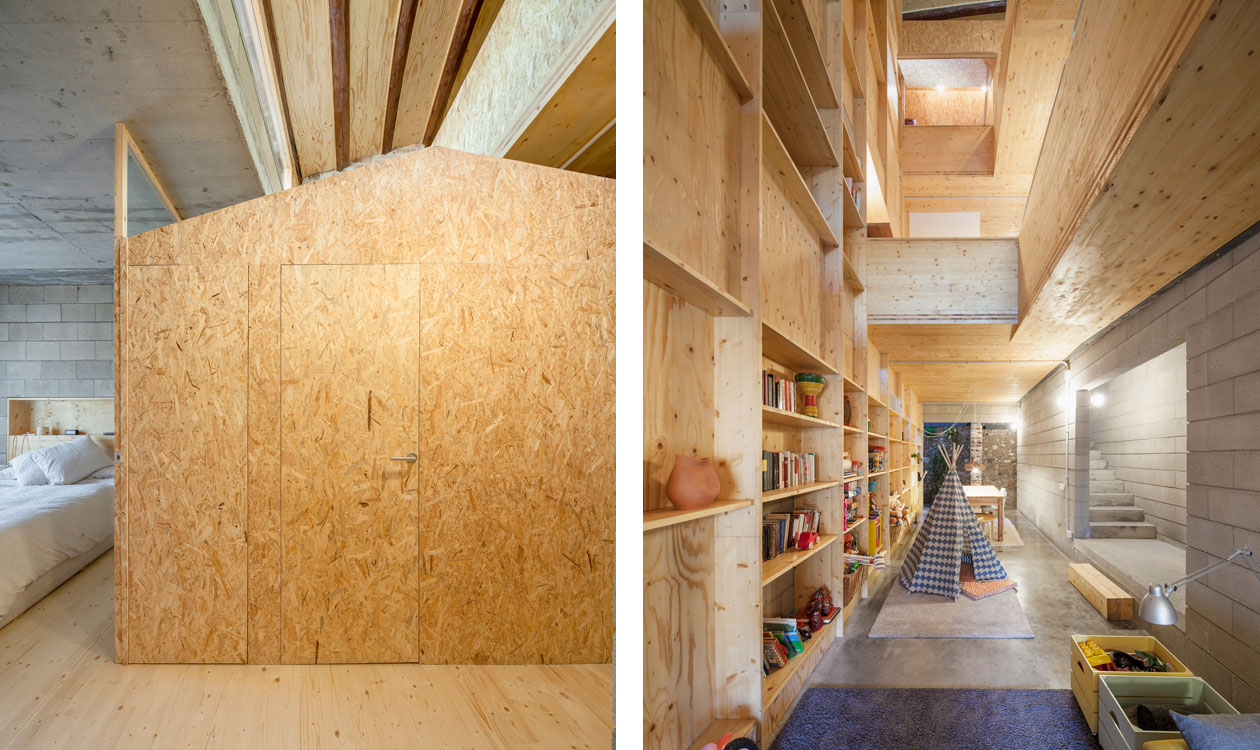 The interior of the concrete house is inhabited though the superposition of laminated wooden panels which adapt to the topography, organize the space, and convey a warm atmosphere to the living spaces.

The challenge of this new home lies in approaching the design process with creative and constructive guidelines with the ability to resolve the particular conditions inherent to the project. In this case, Josep Ferrando, a young Spanish architects with major international projection, decided to recreate a completely new house between walls. The location in the center of Sant Cugat is considered a cultural heritage site, and therefore the house’s main façade and roof had to be maintained. In addition, the building had to be less than 5 meters wide and deal with a complex topography generated by two streets with different heights.

Far from limiting his action to a predictable and submissive design constrained by the restrictions of the context and plan, Ferrando chose to resolve the complexity of the assignment by beginning the design with the shaping of the volume. A new house made of concrete blocks was inserted into the pre-existing building. The dividing walls adjacent to the neighbouring houses increase its thickness and function as a filter and service space generating a place for storage on one side and a “promenade” or circulation space on the other. The void between both service spaces becomes the living area. The thickness of the walls generates interior façades and increases the perception of the space from a transversal view.

In the interior of the concrete house, L-shaped metal profiles support wooden panels which adapt to the topography and the openings of the pre-existing façade, organizing the space and conveying a warm atmosphere to the living spaces. The differences in height between the floors generate cross-cutting views and bring light into every level of the house, including the ground floor, thanks to the openings carved in the upper storeys. The program of the house is fragmented, breaking up the continuity of the horizontal plan in a way that Adolf Loos called “Raumplan”. 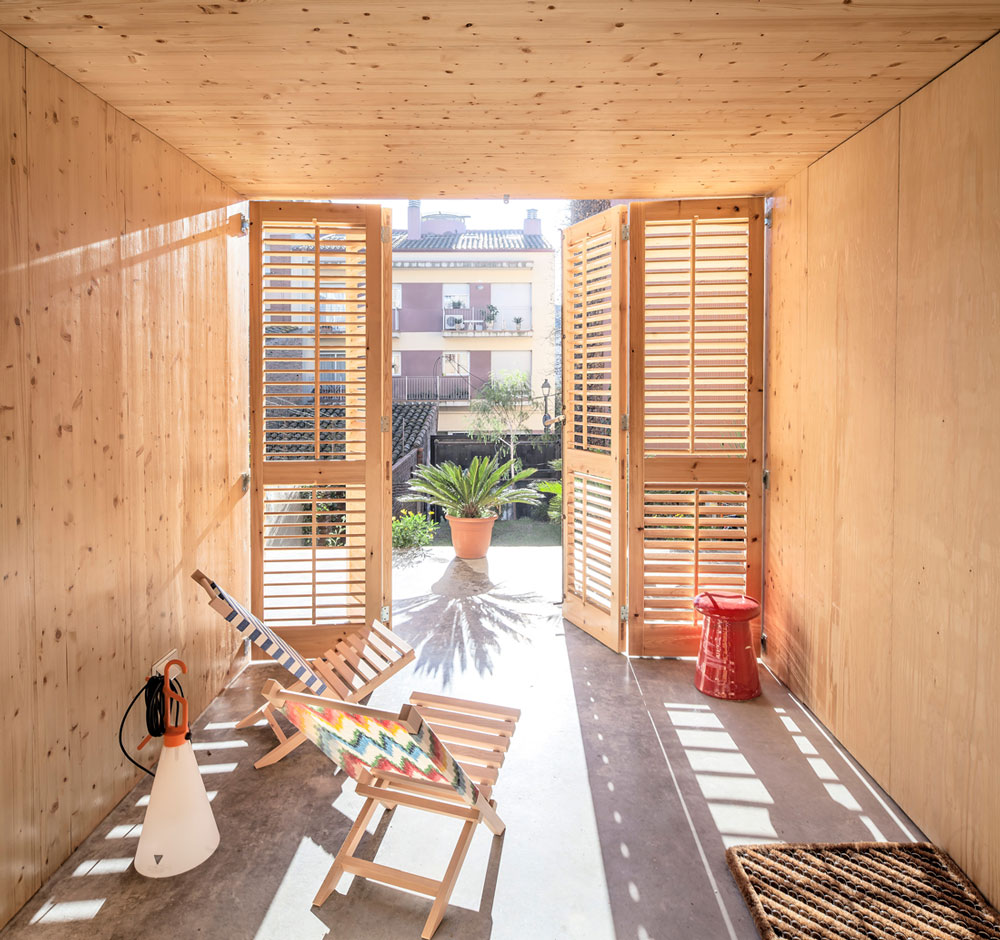 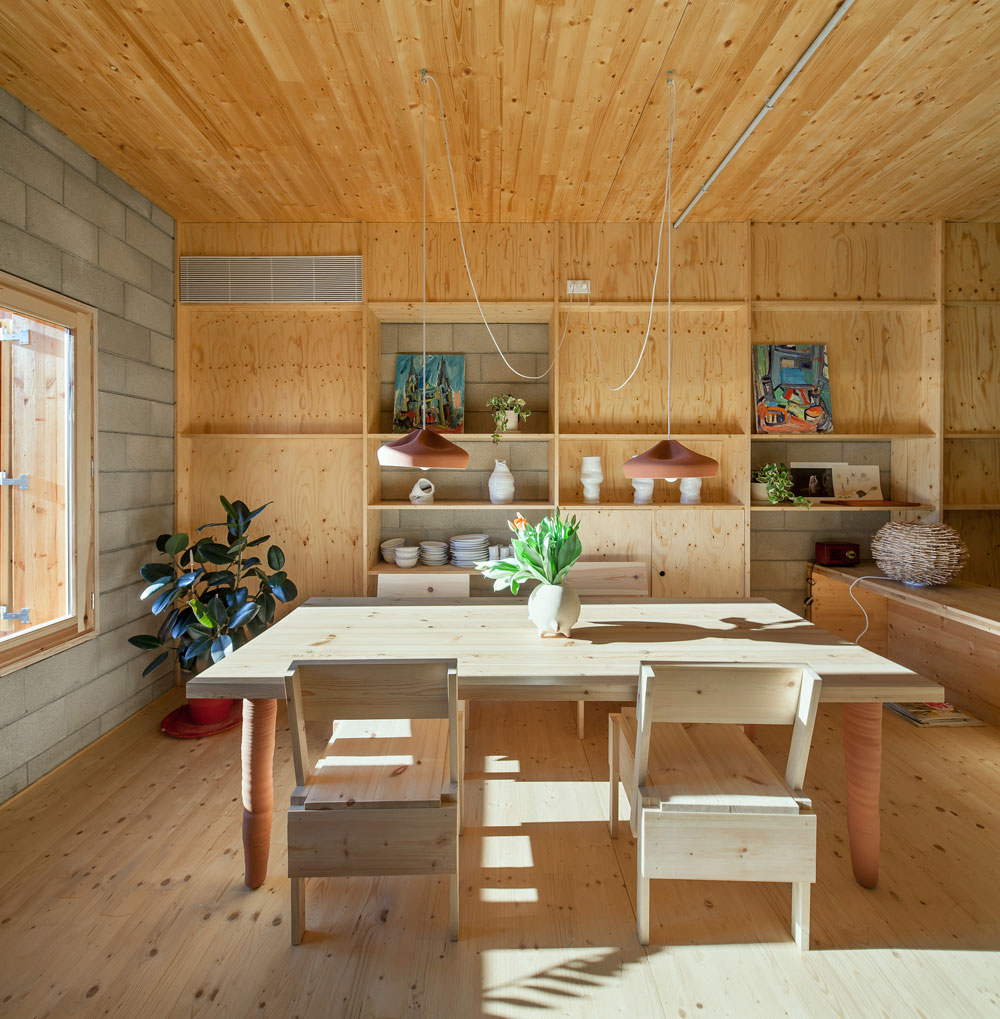 Overall, the sequence of a house-within-a-house shifts from more urban materials to more domestic ones, building an empty point of connection between them, which allows light and views to circulate through all spaces. The internal void becomes the public area of the house. This is the space where all the views cross and relations are built through the “railing-furniture” bordering it.

House in Sant Cugat. Design description from the architect.

Located in the historical center of Sant Cugat, the house between party walls project is sensitive to the inhabitant and the city. A fragment that fits in with the complex urban conditions: the Monastery, the cultural heritage of the street façade and the topography.

The party walls have an increased thickness to serve as storage and service spaces, working as furniture and as a “promenade” for circulation. The horizontal slabs are adapted to the topography and the program of the dwelling unit with a “Raumplan” system. A unique construction gesture to build the entire home, as if it were a hollowed out piece of wood, shaped through light, void and visuals toward the interior and exterior.

« Emerging Forms of Collectivity in the Global South
Ciro Najle »